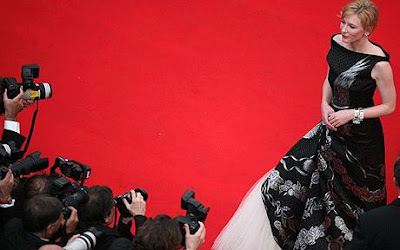 I wasn’t at Mcqueen for long but due to the hours you put in it seems a lot longer. It was an experience I now cherish more than any other, for obvious reasons. I feel truly honored to have worked there and shared a studio with such a genius. A few weeks back after the news unfolded of Lees sad death a few of us met up for drinks, to toast him and to catch up. It was then that I found out he had used this illustration for one of his gowns in his final pre collection. This particular illustration took a long time to do, with tweaks and colour changes along the way. By the time I left it seemed like it wasn’t going to be used due to themes being etc which was a bit disappointing.

The fact it was returned to was a lovely surprise( and honour) in itself, but to see that it was chosen by him to be worn by one of my favourite actresses on the Cannes red carpet has really made my day/year!!! He once again have proved that he knows how to dress a woman, the cut showing the most feminine parts of the neck and wrapping round her silhouette, all with his innate an uniqie twist….. the fashion world will never be the same.