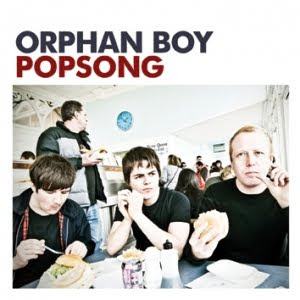 Formed in Cleethorpe in February 2005 the Orphanboy rock/pop trio saw their future elsewhere and swiftly moved to music hotbed Manchester, although some of the band have returned their time their was invaluable in terms of experimenting with style and genre. Their latest single ‘Popsong’ starts with a rather nostalgic sound, one that perhaps recalls an old fashion fairground, you know that almost eerie sound that comes from the Carousels, which are more often than not manned by a rather unsavory looking character. It also transports you to a childhood holiday at a traditional British seaside resort, when you would walk round in your soggy waterproof jackets and take in the greyness of the towns rundown/out-dated charm. The aforementioned image-conjuring sound is shortly joined by thumping drums and a voice which is pleasingly English, regional accent and all, none of that annoying faux American lilting here! After a positive and flowing verse you are willing the song to reach an anthemic chorus but it never quite arrives. The Chorus statement, with its straightforward it is a pleasant listen it meanders along too much without enough peaks and troughs. This could be down to the fact that their previous sound which was coined ‘ Two Chord Council Pop’ was the kind of post punk music where choruses were pretty much no where to be seen. The extensive ‘woah woah’ section does however give way to pretty good sing- a- long possibilities. The overriding feeling is that this bands sound isn’t particularly fresh or current, but definitely references 90’s indie bands and for fans of that era this is definitely worth a listen. I’m not sure I would put these guys under the ‘next big thing’ category but an enjoyable few minutes listening time all the same. While it may not appeal to those looking for that so called ‘cool’ new sound, the Grimsby threesome are accomplished and polished in their aim to create an energetic, uplifting and melodic tune. It will be interesting to see if the rest of the album ‘Passion, Pain and Loyalty’, due out on 2nd August will be similarly upbeat or whether the pain segment aspect of the album title will soar through!