I failed to get home after the Run NYC party on Tuesday so had to view the Posthuman show at Freemasons Hall and Tom Ford Beauty collection at the Connault Hotel with fuzzy teeth, greasy hair and my outfit from the night before, far from the groomed and chic attendance I had hoped for!! ( Potential employers reading, this is not the norm for me I just missed my train back home)
I knew would I be adding to the existing problem, as I had a gig in Shepherds Bush to attend Wednesday night before I could head to the sanctuary of home with the luxury of rinsing off the evidence of festivities. I would be seeing Two Door Cinema Club with my good pals Nat, Watty and Chapman. We have just returned from a short break in Ibiza where ‘Undercover Martyn’ has been one of the soundtracks of the life affirming holiday.
Following supports acts ‘We Have Band and Kowalski, the three-piece band hailing from Northern island played the majority of their acclaimed debut ‘Tourist History’, including all of their feel good singles. We were also treated to some new sounds from the boys one of which was currently untitled but apparently had the working title ‘La Nouvelle Chanson’ on their setlist.
The affable frontman Alex Trimble had begun the show with words that were only going to endear him further to the crowd which were already largely won over, explaining his happiness to be playing London again.
Throughout the night, the between song chats and ecstatic wide eyes connoted that the band were surprised and relieved by the rapturous response received from the buoyant and vocal audience members. I had seen the boys play the tent at Reading Festival this year and found myself part of one of the most raucous and chaotic pits of the weekend, slightly curious for a relatively new elctropop/indie outfit, so I was less than surprised by the crowds enthusiasm.
Perhaps they were recalling past performances at the venue, where they were way down the bill and far from being the main attraction. The singer described having nerves before the gig, but the wine he had consumed seemed to have successfully calmed him and allowed him to put on a faultless show, a fan next to me said they couldn’t believe that had many to surpass the album with their live show.
A technique that successful adds to the euphoric and celebratory nature of a gig was used to great effect when red and white ticket tape showered the ‘oooh’ing pit as the the band wrapped up the show with ‘I Can Talk’, cue many records on the iphone/blackberry/camera……
Concluding the show a humbled Alex Trimble touchingly told the hugely satisfied audience that tonight’s gig was “one of the best gigs ever for me, personally, and to see you dancing like this is amazing. Thank you so much.”
Initially I had dismissed the band as just another obscurely named, hip band, that would more than likely be championed by a particular publication to the point where you are tempted to ignore the hype out of principal. Thankfully I ignored the ‘cool’ label being put on the chaps and listened to the music and found how ridiculously accomplished they are in creating bouncy, feel good pop songs. The BBC was most definitely savvy when including them in the Sound of 2010 Poll, and if they stick to this formula they are more than likely to be around next year, and many years to come…… and perhaps they will be the perfect soundtrack to another life changing holiday!! 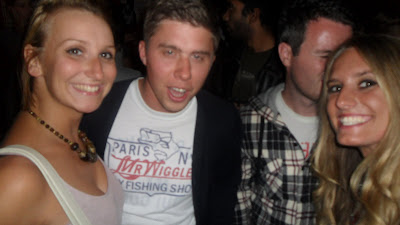 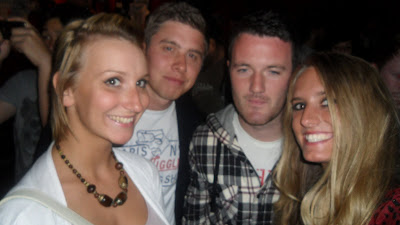