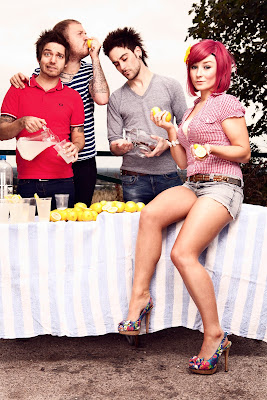 It’s been a while since I have caught up with the vibrant four piece Mimi Soya, so I thought it was about time I grabbed the foxy Jorja for quick natter about the busy year they’ve had and their hopes for 2011…

If you haven’t checked out their latest video, be sure to press Play here…

You released a brand spanking new video last month, can you tell me a bit about the song and the accompanying video?

The song is simply about wanting to be somewhere else than where your at now. Wanting to get out of the dead end job your currently in and living the high life. And the video pretty much says that. Its almost a day in a life of the ‘Millionaires’ Mimi Soya. We’ve gate crashed someones house and were pretending to be posh and rich. Until we got caught. Ha.

Are you guys naturals in front of the lens would you say?

I can’t vouch for the boys. Though joe is a natural at all times. He acts like a goof and it always works. That’s just him. I get embarrassed in front of the camera. I feel stupid trying to act ‘hot’ or feminine.

Do you have lots of ideas already for future videos?

We haven’t discussed future ideas yet but I’m sure there’s some brewing. I would quite like to ask fans what they’d like to see us doing in a vid, especially as there gonna be the ones watching it.

So what kind of year has Mimi Soya had?

We’ve had a busy yet fun and exhilarating year. We’ve packed a load of stuff into it but I’m hoping 2011 will be bigger and better and open more opportunities for us. Fingers crossed!

What have been the highlights?

The video has been my biggest highlight by far. That and playing some awesome shows

I think you spent another chunk of time in Holland this year, have you got a good fan-base out there?

Yeah we have a great fan base in Holland. They put on some great shows there and we enjoy every second of it. Its almost a second home for us.

You released your EP this summer were you pleased with how it was received?

It was produced by Romesh Dodangoda, how does his approach stand out amongst other producers, how do you think he influenced the sound?

Romesh is a real friendly guy and made us all feel at ease. He gave us great tips and he took a real pop approach to our sound. We would love to work with him again.

A lot of young bands say the music industry is a hard place to be these days, what are your thoughts?

I agree, it is a really hard place to be. Its hard to juggle what people want to hear and what you actually want to play. you always get judged and compared with other bands. But if you love music then you’ll just stick a nice big middle finger up to the haters and crack on with what u do best.

In terms of funding records, tours, videos etc how do you make it work? Would you go down the pledge route?

Funding is always an issue. Our label helps us a lot and we make money off of tours which fund eps etc and

What are your plans for Christmas,do you have a chance to chill out?

This xmas is family time. December we are just doing a small bit of recording and writing, its a busy and expensive time of year so were all working hard at our ‘jobs’ and waiting for the new year to come.

In 2011 we hope to do great things. Ideally release a few singles, with videos to match and write and record an album. We would also love to do a european tour and maybe get involved in some festivals. That would be cool. I guess the possibilities are endless if you work hard for them.