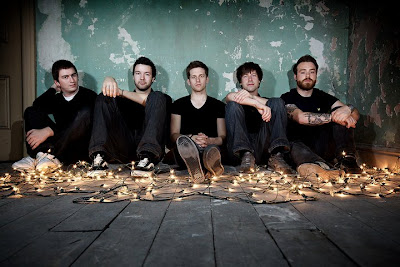 With the current state of the music industry bands have been forced to rethink how they go about recording and releasing their material. I caught up with Andy Sprake of Uk 5 Piece Failsafe to find out more about the route they have chosen to fund their 3rd Album…..

So what kind of year has Failsafe had?

We’ve had an interesting year to say the least. We haven’t done quite as much touring as we’re used to, which has actually been a welcome change as we’ve had a slightly different approach to everything. It’s given us a lot more time to focus on writing the new record which has been going really well, we’re almost finished writing now and can’t wait to get it released next year! We have done two successful headline tours, but while we weren’t on the road we filled our time really well. We appeared on the Inbetweeners which was a big success and also on the NBA2K11 basketball game soundtrack which has opened the doors to many new possibilities for us.

You played at SXSW, how was that experience for you as I’ve heard it can be tough…

SXSW was amazing. We had the best time, but when people say it’s tough, they either mean it’s tough financially to get there or that there’s so many shows going on that you can’t guarantee a good crowd. We played two shows out there, both of which were brilliant in their own way. The first was really busy in a well organised stage, and the other was on the front lawn on a hair salon – and although that might sound insane, it’s nothing compared to some of the stuff we saw… involving masks, waistcoats, bike pumps, beers, popcorn and Viking helmets, but I won’t say any more. It was a very expensive trip, but we’d do it again without a second thought.

You played Sonisphere and Boardmasters, what would be your dream festival to play in 2011?

Playing any festival is an honour. To be asked is a great feeling, and we’ve loved every festival we’ve ever played. Both Sonisphere and Boardmasters have been great every time. It’d be great to play at Leeds, Reading and Download next year, but we’re hoping to announce some good news festival wise pretty soon!

You toured in November, did you see any increase in crowd size after your appearance n CH4 The Inbetweeners?

Definitely, the crowds have been great and we had a great time on this tour. I never thought I’d hear someone call us ‘Band Wankers’, and we’ve been called worse so it’s all good!

Can you tell me any funny anecdotes from set?

When Simon Bird first said “Ambulance or Mummy”, neither me nor Rob could contain ourselves and the crew started laughing with us. It just turned into a laughing mess. Good times! It was also pretty funny when Simon Bird approached us and said “You’re the band aren’t you? I recognise you from all the posters”. Nice guys.

I hear that you hope to record new album early in 2011, what stage are you at, have you written the majority of the songs?

Yeah we’re planning on recording our new album in the first half of this year. The songs are mostly written and we’re so happy with how it’s sounding, but the problem with us is that we can’t stop writing. Of course, it’s not a genuine problem because a band needs to be able to write songs, but as soon as we feel ready to record, we’ll write a new song and before you know it, we need to drop songs from the record. It’s undoubtedly, from our opinion, the best record we’ve written so far.

Can you see any major changes from previous recordings, any stark new directions?

Ask any band about to release their 3rd record this question, and they’ll tell you things like “naturally the band has progressed” etc etc, well to tell the truth it’s the same with us. We’ve always written what feels right and for a band like ourselves, who put the music before anything else, the landscape of what feels right is ever changing. There’s definitely a more ‘rock’ vibe to this album, it’s still catchy and it’s still Failsafe but again, we feel the songs are stronger, bigger and better.

Will it be a positive or negative sounding record, or a bit of everything?

Whether the record will come across as positive or negative is subjective. I for one think it’s positive with a dark edge to it, but it’s not so simple to categorise this type of music. It is simply how we feel ‘musically’.

What producer are you working with?

We’re in talks with several producers but I’ll leave that until we’ve committed to one!

Every young band I speak to reports that the music industry is pretty tough these days, what’s particularly challenging for you?

In my opinion, and many others before me, the music industry is an extremely frustrating environment. There are countless, incredibly talented bands out there that don’t get the recognition they deserve. It’s simply because the public are spoon-fed music, music that will sell, and essentially told it is ‘good for them’ if you will. Many peoples’ opinions on music taste are almost made for them by the constant regurgitated crap that’s repeated on the radio, tv and in magazines. They accept the music industry as what’s provided to them. By all means I don’t mean to offend anyone, because I’m sure some readers will think “He better not be talkin’ bout me!”. I don’t know about you, but I’m still a big fan of last.fm where it’s so easy to discover bands you’d never have heard of in the magazines or on the radio. For me this is where the real, honest music lies.
It’s an uphill struggle for any band who wants to do it for the music before anything else. I find that the most challenging thing in the music industry.

Funding is a big issue, how have you guys made it work previously (other jobs/sponsorship etc)?

Previously we’d had the help of two record labels, Deckcheese and Small Town, both of which were great for where we were at, and what we wanted to do. The sponsorships have helped us a great amount too. This time round we’re doing something completely different, and raising money through our friends, family and fans to record the next record and of course, give it back to those who donate. The more people donate, the more they get back from us. It’s a way for us to keep it completely independent, honest and pure, and we cannot wait. www.indiegogo.com/failsafe

Do you think this is how things will be from now on for alternative bands?

I think it’s a great way for bands and artists to do things independent of any encroachment on their artistic control. I also think it’s a great way to connect with fans from all over the world who want to play their part in your album or whatever it is you’re raising money for. It’s something totally different and it feels great.

What are your views on people downloading ?

I know I don’t speak for Failsafe as a whole here, and with good reason, but my personal opinion on downloading is that the music industry is never going to beat it, so stop wasting time trying to combat it and think of ways to work with it. Bands in the past have survived and only been able to spread their name around through downloading, copying CD’s and mix-tapes etc. In a way, it’s been going on forever! Yes, downloading reduces sales which can in some cases cripple smaller bands, but if you have no ‘Simon Cowell’ pushing your music with all the financial weight you could ever dream of, how the hell can a band expect to sell enough records to sustain themselves anyway? Download away, I’d rather people heard our songs and came to our shows!

What would you suggest to fans if they want to keep you and their other favourite bands going?

Keep coming to the shows, buying the merch that you can’t download and generally have a good time! The live shows make all the difference; it’s what bands like us do it for!

If you guys want to support the Failsafe guys head to www.indiegogo.com/failsafe and donate…. make yourselves part of their success!!