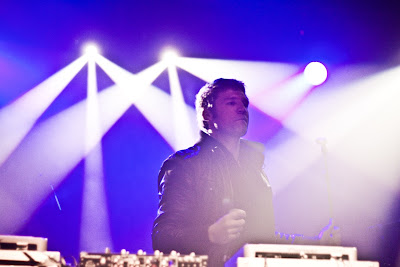 DJ Lucius Brave describes a night in his musical company as a unapologetic mix of electro and breaks, with an added dose of hip-hop and dubstep. It isn’t unusual to see the former rock front-man scaling venue rigging and displaying complete abandon while throwing himself into the hands of a euphoric crowd. As one half of L’ Amour La Morgue he showcased his renowned high octane performance at events including Reading/Leeds Festival, Beatherder and Gatecrasher New Years Eve, sharing stages with the likes of Deadmau5, Faithless, Calvin Harris, Erol Alkan, Utah Saints and 3OH!3. Via solo sets he’s managed to combine his ‘work’ with his love for sports securing a residency at the Tignes ski resort in the French Alps, playing for VANS at their winter X-Games event and even hosting Wakestock 2011. While recovering from his weekend at Freeze I caught up with LB to find out more about life as a DJ……

Some people will know you as frontman of Douglas and The New 1920. Had you always DJ’d alongside performing in bands?

The only experience I’d had originally was taking over stereos at house parties. Yeah, I’m THAT guy. My apologies to any neighbours that caught the brunt of that. I started DJing while I was part of The New 1920 because I had a slot on Xfm radio here in Cardiff. I went on and did some tour managing which introduced me into bigger clubs. From there I taught myself how to use CDJ’s and how to mix and here I am.

The process of creating music varies considerably when comparing creating a band rock song to creating a mix.Which process do you
prefer?

Both are fun when you’ve got a good flow on. Each has it’s pros and cons. Sometimes it’s nice to just get on with stuff in my room alone and other times I wish I was jamming tracks out with the boys. It’s cool to have somebody to bounce ideas off so it doesn’t always have to be a solo mission. I’ve been working with a great producer called Undersound and we have a good dynamic between us. He’s a really talented musician. I’m way funnier than him so at least I have that going for me.

Can you describe your personal process when composing a song ?

The process for me usually happens when I’ll get an idea, perhaps hum some root notes into a recording device or play them in on a keyboard. From there I’ll work on a basic structure and skeleton. I’ll then start to build around what I’ve got. This will all happen either really naturally and be a joyful experience, or I’ll hit a creative wall and want to bang my head against it. Then I may consider turning to booze and crime. At times, writing a song can be as equally frustrating as it is enjoyable. When you’re dialed in though and things are coming together, it’s amazing. I mainly use Ableton to record in but I’d like to learn my way around Logic. Then it’s keys, pads and strings.

You now go by the alias Lucius Brave… How did you come up with that name ? Do you feel it necessary to have a certain amount of mystique?

You were one half of LALM and used to don masks and hoods when performing. Was this to help with the performance or just to create
an image for the duo?

We suffered from the worst bad hair days. Chronic hat-hair syndrome phase 3. We are also extremely shy and can’t look at bright lights. Kind of like a Mogwai.

How does your Lucius Brave stuff compare to LALM?

You have played massive venues like Gatecrasher and iconic london venue KOKO. Do you find particular venues more nerve-wracking ?

I get nervous before any show no matter how big or small. At times I suffer from terrible stage fright and can barely talk to anyone. It actually used to make me physically sick to the point where I’d throw up. It’s the anticipation. I just want the people watching to enjoy themselves and the thought of that not happening sends me under. I really come into my own with the larger crowds though. I love playing festivals and opening for people on tour. It’s the best sort of ‘gang mentality’. When there is a lot of people out to party, it’s infectious. You just have to have the right songs and the right energy to kick the place off. Then buckle in and watch people get wild. It’s incredible.

The life of a DJ can be quite solitary one.Do you mind performing and travelling on your own?

I kind of like it. Don’t get me wrong, it’s awesome touring with fellow band members and sharing the experience with your buddies. But I don’t mind heading off alone. I put my headphones on and get going. It’s a little adventure. I enjoy not having to talk every now and then. Sometimes I just sit and observe the passing world as if I was a ghost, wondering what is going on in other peoples days at that moment. Other times I feel like everybody can see me and are wondering the same thing. They’re probably thinking “I wish that weirdo would quit staring at me”

Anyone who has seen you DJ will be aware of your energetic stage presence.You appear extremely confident but is that just a performance persona?

It changes within different aspects of my life. I’m not a shy person generally on a day to day basis but I have my moments where I’ll question myself just like most people do. It doesn’t help being super self critical either. But when you get up to perform on stage in front of people, you have to bury whatever doubts you might have and really go all out. If you don’t believe that what you’re doing is positive, then they certainly won’t. After I get over the initial nerves then the rest is just me having a good time. The confidence stems from having fun. How can you not have a good time playing massive songs and climbing stages!

Are you someone that does your set then heads home, or do you stay on to party with revelers?

I’ve always been one to stick around and get involved!

How do you prepare for a set?

Although it can create euphoric moments people often think of dance/club music as emotionless/soulless… Would you agree, and do you try and instill some depth with your own tracks?

I think people that say that about dance music just don’t understand it. I was never schooled in the dance genre but I get a kick out of it and recognize what I like to hear and what I like to play. People are entitled to their opinion and some folks just don’t feel certain music in the way others do, so will never quite get it. It’s an individual thing. Music, no matter what genre it is, how it is played or where it is recorded, is all about feel. You can’t physically touch it or see it but you can feel it and witness what it does to people. It’s an attack on the senses. Dance music is filled with intricacies that weave throughout the songs constantly, massive build-ups that send places into a frenzy, catchy melodies, great vocals and structure. I don’t like ALL dance music just like I don’t like ALL guitar based music, but those specifics are what I look for in any song, no matter what genre. Some people just hear repetitive bleeps and that’s why they may make negative comments and they shut off. The truth is that somebody has dedicated their time and effort into creating and producing songs that tap into a vibe that sets dancefloors on fire. Now tell me that has no soul.

Your set at Wakestock this year summer proved very popular, would that be up there with your DJing highlights?

It was a great experience. There were a lot of talented people to watch at that festival. It made me realize that I had to raise my game. I love playing places that are linked to freesports as well. I’m really into my board sports so it was cool to be involved in that festival. It’s good to see it growing so much.

What would be the dream destination/festival/venue to DJ?

There are so many countries I’d like to visit and festivals I’d love to play. Snowbombing, Big day out, Coachella to name but a few and obviously there are all the big British ones. There is an event every now and then in Budapest that is thrown in a thermal bath. That sounds interesting. It’s a spa-party. A sparty! I’d be into that! I just want to see the world, throw myself around some stages and play some awesome music.

What’s on your Ipod at the moment?

I listen to a whole load of different stuff all the time. Today it’s been The Naked and famous

What is your USP as a DJ?

What advice would you offer aspiring DJs?

If you enjoy it then just get out there and do it. Practice, discover new music, play for your friends, make mixtapes. Most importantly, have fun.

What are you working on at the moment?

I’m writing new material. I’ve just finished a track with Undersound so we’re looking to get that out asap. I’m also working on my glutes.