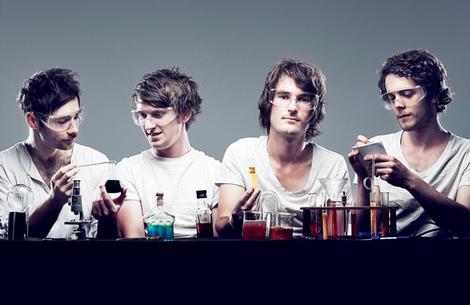 Formed in mid 2008, Jumping Ships are an alternative rock pop
foursome from Brighton.  They band showed promise from an early stage,
supporting the likes of  Bombay Bicycle Club at Club NME as an unsigned
act. In October 2010 they self-released their debut EP ‘Orientation’ to
the masses, which was swiftly greeted with glowing praise courtesy of
the  alternative music press. This effort would also grab the attention
of Jack of Alcopop! Records , who decided, rather wisely, to take
on the quartet at the beginning of the year. For their next collection
of songs they began by returning to the previously successful recording
environment of the ever-supportive Brighton Electric studios, where they
created the top notch single ‘Heart and Hope’ with the help of Dave
Tindale. In June 2011 they went into Red Bull Studios in London to
record two more tracks for the second EP. They finished the process in
Reading at Outhouse Studios ( who have previously worked alongside You
Me at Six and Enter Shikari).  They have just released the
aforementioned second EP ‘Standard Bearer’, and the good news is that
the positive feedback seems to be repeating, with Rocksound honouring
their newest EP with an impressive 8/10 rating.  I have only tentatively
scratched the Jumping ships surface in this interview… I’m hoping to
grab the guys for another chat in 2012, when I am confident they will
reveling in success!  In the meantime Vocalist Michael Williams and guitarist Kai Smith give us a nice glimpse into the life and times of Jumping Ships.

Please tell me how you formed?
KAI – We formed about three years ago in Brighton – a couple of member
changes later and we had the finished lineup. We all moved down to
Brighton to study and be involved in the music scene. We all met as we
had similar tastes in music and used to go to the same gigs. Rich and
Kai knew each other from their homeland which is North Yorkshire

Were you united in your tastes and influences… Was it clear what type of sound you wanted to make?
KAI – We never set out with an explicit intention to sound like
something in particular, but the fact that we have lots of mutual
influences means that we’re all on the same page when we’re writing
stuff.

Brightons is known for being a creative hotbed, do you think your
location has had a big influence on your sounds and progression as a
band?
KAI – Brighton is great, it’s jammed packed full of musicians, so there
are always lots of people to bounce ideas off. Living by the sea is
pretty inspiring too 

You have completed a UK EP tour recently, what should one expect from your live shows?
KAI – Blood, sweat and loud noises!

Have you noticed any trends in the types of people coming to your shows?
KAI – Being involved in the Alcopop/BSM scene is ace as everyone that
comes to the shows are true music lovers, it’s a really nice group of
people.

Does the touring lifestyle suit you?
KAI – Yeah we all love being on the road! There are obvious hardships,
but as long as you’re prepared – always have a sleeping bag and a towel
– then you’re alright. Remember to pack the talc 😉

You have been described by some as having a Britpop sound. Were
you all gripped in the Blur/Oasis rivalry and Britpop era in the
nineties?
KAI -We have had that before, I don’t get it at all! They’re great
songwriters and have some massive tunes, but I wouldn’t say they’re in
my favorite bands of all time. Blur over Oasis any day!

Your honest and open lyrics are also commented on.. What generally
inspires your words and is it ever difficult to perform such personal
material to a mass audience?
MIKE – It can be anything really but generally its about my personal
experiences or commenting on other peoples experiences. ‘Movers and
Shakers’ on the new EP is about a time when I lost faith in the music
industry a bit whereas ‘Broken English’ is about alienation. I don’t
find it difficult performing it to people; hopefully they will
understand what the song is about or they apply their own meaning.

A lot of emerging bands say that the music industry is quite a
tricky nut to crack these days, how are you finding it? What have you
found to be the main difficulties?
KAI – I think the main difficulty is getting people to believe in the
music you’re making. If/once you convince people to do that, then
you’re set. You do need to maintain a pretty high work ethic!
MIKE – It’s very time consuming but is the most rewarding job in the world when it pays off!

Your second EP Standard Bearer has already sold out before it’s even
been released. Do you get a sense that things are going at quite a pace
for you now?
KAI – We’re just really happy that there are people out there that want
to hear it! We’ll take things as they come and just crack on with
writing music and playing shows .
MIKE – The shows on the last tour were ace, and it was the first time
we had toured the new material and people knew all the words already.
Cant beat that.

You’ve had some great reviews.. Will you always read them and how do you deal with criticism?
KAI – I think it’s good to read you’re reviews, good or bad. It’s
always handy knowing what other people think of your music and how they
perceive it. It’s one of those things that’s impossible to be
subjective about.

How has your sound evolved since your first EP?
KAI – I think it’s a bit more progressive and has a harder edge to it.
I’d like to think there are still some pop hooks in there, but with a
bit more balls on the instrumentation.
MIKE – The subject matter is more honest on this EP as well, one or two
of the tracks on the first EP were (lyrically) a little bit clouded
with metaphor.

Any imminent plans to record your first full length album?
KAI – Pending… 😉
MIKE – cant talk too much about that.. but it would be amazing to get
an album out in the future. We would love to go back and record at
Outhouse Studios (Reading) as they did a fantastic job on our new EP.
Also would like to work with Chris Coulter, Carl Bown.. and of course
Butch Vig! Haha.

What/where is your dream place to perform?
KAI – Iceland.
MIKE – haha.. erm.. well for me that would be Camden, Roundhouse.

What are your views on the current state of the charts?
KAI – We’re all closet pop fans haha. Big in to girly pop at the moment
– any Katy Perry or Rhianna is a goer. Would be nice to see some
heavier stuff in there though.
MIKE – The auto tune stuff is a bit hideous really. I also don’t
understand why Jason Derulo keeps saying his own name in his music –
didn’t he see what happened to Craig David over here when he did that?!
There is still some good songwriting going on in the charts but no
acts that I can actually say that i like.

Band you would most like to tour with and why?
MIKE – It depends if I am realistic in my answer really! ASIWYFA would
be amazing as well as Manchester Orchestra; Wintersleep, Twin Atlantic
maybe. ‘The Most Serene Repulblic’ would be ace –

Who are are you all listening to at the moment?
KAI – Dananananaykroyd, Young Legionnaire,
MIKE – La Dispute, Three Trapped Tigers.

What are your plans for the rest of 2011?
KAI – As much gigging as possible and cracking on with the next record. Getting our heads down!