The annoying yearly conundrum.What to do on new years eve…

Every year I end up making the decision about an hour before the various options kick off. This means having to scramble together the appropriate garb to suit the final chosen shindig… whether it’s an event which requires sexy party gear or my pet hate…. fancy dress (although at least with that I can pretend my look was intentionally disheveled or trampy).
It looks like I will be keeping up the tradition this year. I am so envious of those who are coupled up, who have the option (or excuse ) to stay in, snuggle under a duvet watching Jools Holland while gorging on MSG ridden take-away.

A couple of years ago I tried to rebel against the concept that one should be out partying having ‘the best night ever’. The conveyer belt of New Years disappointment resulted in the decision for me to boycott all socializing. I thought that if I planned for a lackluster evening it would be of no surprise when it achieved just that and therefore not a disappointment.  In January I tried my hardest to convince everyone that staying in alone had been a fine way of spending the year to year transition. If I am honest it did feel a little sad watching the TV festivities in bed on my tod. However, I did enjoy the feeling of being anti conformist for at least 5 minutes.

I suppose I should feel blessed that this year I have a few options on how to spend my evening, but as someone who seems to have a severe inability to make decisions, good ones in particular, this has flagged up even more quandaries. In usual negative fashion I also can’t help but concentrate on the option glaringly omitted. For a while all signs pointed to me having that special person by this occasion. Sadly it would appear that all those signs were given out/vocalized minus real intent or good nature, and I find myself achingly single again – (this tale will most probably lead to another blog post).

So back to the decision making.. One option is infinitely more superior in location and function compared to the others. But with attendees, the majority of which are a few years younger, I will likely be reminded of my advanced years. It is also likely that these beautiful young things will be ‘getting on it’ in quite a big way, and as a non-drinker I will undoubtedly be perceived as the boring old fart – quite accurate a description it would be too! Amongst the bevvy of strangers and acquaintances there will be a lot of very dear friends and colleagues attending, most of which will be partying with their partners. I am not quite so bitter that I begrudge their ‘in a relationship’ status, particularly as they are all gorgeous and lovely people, but I am very aware of what it is like to be a vibrant yellow lemon at such events. I have suffered the humiliation of many pity kisses/hugs at new years parties (and weddings) the last few years. While I appreciate the kind gesture when my girl friends offer up their husbands and boyfriends for a peck and squeeze at 12.01 – when they have done with the celebratory PDA’s –  it doesn’t half make you feel like a pathetic charity case. When someone elses husband holds your hand and says ‘don’t worry you’ll find your prince charming one day’ you also can’t help but wonder what desperate vibes have been resonating from your body for the last year.

Another option would be to join my usual ‘lads’ for their house party. I’ve always found the formula for house parties winning. The fact you have somewhere to crash when tiredness or overindulgence sets in always makes it a potentially winning choice ( if you are confident that you won’t be fiddled with in anyway once you’ve konked out on the sofa/floor/cupboard). This particular celebration would include some of my oldest friends too, those I’ve terrifyingly known for twenty odd (very odd) years. This means a welcome lack of awkward conversation. Shindigs with friends of friends or strangers usually means a whole lot of those draining ‘getting to know you’ chats, where you have to appear interested when asking about their work, how they met your mate and where they live etc. If you are lucky in rare circumstances the person you talk to is giving and open (or drunk), and you can fast forward straight to the point of comfort-ability where you can discuss each-others relationship status or indulge in over zealous living room/kitchen table dancing. A party filled with these rare treats are always the most successful.
Despite the handy credentials of the house party with close friends, because of the pressure put on by the media and other people you feel like you should be putting in a little bit more effort for new years…that the party should include some sort of spectacular element… a firework display or stripper perhaps? I wonder when spending time with your dearest friends became so inadequate. I think some things need to be re-evaluated people !

So there’s two of the possibilities… I wonder whether I will end up avoiding making a decision which will inevitably p***  someone off and end up rebelling against the masses again. Because you see that’s another sticking point when it comes to the big night… it’s pretty much impossible to be with all the people you love, so you end up feeling you’ve let someone down. Maybe I worry to much….

Despite being asked all too frequently for the last month ‘What you doing for new years? I have tried to put little emphasis on where I will be when the clock strikes midnight. Instead,  I have been thinking about the changes I intend to implement, as well as planning exciting adventures for 2012. Despite a somewhat shaky year I have decided to think positively, ponder how I can move forward and how I can be a better and happier person in the new year.  I know it all sounds disgustingly cheesy and predictable, but that’s the simple truth. Whatever you decide to do for new years I hope you all are happy or at least content with your evening, but most of all that you are looking forward to to doing all you can to make the next year a life changing one. 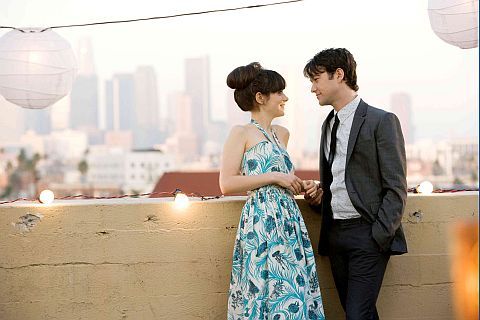 P.S Are all your male ( and some females) as in love with Zooey as mine are?