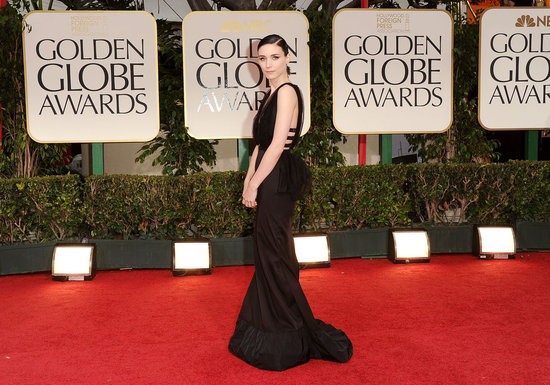 All of our favoutie A-listers, decked out in all their designer
finery descended upon The Beverley Hills Hilton for the 69th Annual
Golden Globe Awards. It is impossible for me to review every look from
the nights display, but here is an overview of some of the hits and
misses from the star studded event.

One of the earliest to step onto the red carpet was the timeless silver fox George Clooney, acting as the perfect gentlemen alongside with his current lady-friend Stacey Kiebler.
As if she didn’t already appear to have it all, she pulled off one of
the most stunning looks of the night. It was hard to fathom that this
ultra feminine vision in red was once a ass- kicking wrestler, looking
ever so feminine in her Valentino column gown. Her soft look was
enhanced by her wisely subtle and pretty make-up, and her relaxed
tousled up-do.

I was particularly excited to see Rooney Mara’s appearance ( see
top image) having forged quite a reputation for herself during  the
onslaught of press supporting the release of ‘The Girl With The Dragon
Tattoo’. In keeping with her drastic and edgy make-over for the feature,
her red carpet choices have been similarly dramatic and alternative –
featuring sheer panels, Gothic influences and unusual hemlines. For the
GGs she opted for a black Nina Ricci gown, keeping up with one of her
recently formed traditions – once again flashing her stunning alabaster
skin with a low V and peek- a-boo side slats. While the top was young
and sexy, the bottom half was elegant, its tulle peplum completely
befitting of an award ceremony of this stature. Despite the fact that
the young actress would have had all of the top jewellery designers
wanting to decorate her body, she kept things beautifully bleak,
omitting bling completely apart from one of her own barely noticeable
rings.

You never expect Zooey Deschanel to fit in with the prevalent
trends on a red carpet. She will be generally be one of the admired
anomalies amongst the crowd of A -listers. That said, she is predictable
in her quirkiness. Last night she wore a custom Prada gown, which
teamed a green beaded top half with a simple silky black floor length
skirt. The colour combination alone is extremely rare, but she ensured
to maintain her A- typical style with nails that wore tuxedos… simply
adorable.

It pains me to say that the beautiful redhead Jessica Chastain
failed to nail her look this time round. Not only has she become one of
my favourite actresses, but she has been taken many impressive turns on
the carpet  in the last year. Despite choosing beautiful beaded
Givenchy gown, the fit wasn’t quite right around the middle,  and her
ill advised hair ruined the overall success of the look . Quaffed high
at the front, the hair style was aging and outdated, the pearls making
it even more old-fashioned, without being charmingly retro.
With a body so gloriously long and lean and a face of such delicate beauty, it is hard to imagine Charlize Theron
ever looking bad – even after her make-under for Monster she looked
better than me on a good day! Last night, she once again achieved
goddess status in a stunning pale Christian Dior Couture gown. Its low
neckline and high split was daringly sexy with the over-sized hip bow
giving it that high fashion edge.
The blush and ethereal tones were one of the most obvious trends from the night – Kate Beckinsale teamed a glamorous up-do and large diamond encrusted earrings with a structured strapless bodice courtesy of Robert Cavalli. Elle MacPherson
continued to defy the laws of ageing and human possibility in her Zac
Posen, which featured one of his specialist kicked-out skirts. He was
given the opportunity to showcase his trademarks design features further
via another style queen, this time in a striking red on the diminutive Reese Witherspoon. She joined Elle in opting for BIG hair – no doubt achieved by a gazillion extensions.

Heidi Klum opted for simplicity with a slinky Calvin Klein
number which she accessorized with a vivid turquoise statement necklace.
She continued the relaxed approach with simple straightened locks. Kate Winslet rarely
loses on a big occasions like this… this statement applying both to
the awards, as well as the style stakes. Last night she wowed in another
monochrome choice, this time created by Jenny Packham.  Featuring a
subtly sexy keyhole feature on her chest, the off-white battered silk
skirt washed flatteringly over her much-loved curves.Waif-ishly slim Clare Danes
also opted for a black and white number, with a Classic looking J
Mendel gown. It was a choice that called for the popular look over the
shoulder pose – to showcase its breathtaking back detailing.

Comedy actress and certified sex-bomb Sofia Vergara may have
stolen the style crown for me. Okay so the inclusion of a mermaid train
may be predictable, but if something works for you… The teal
custom-made Vera Wang strapless gown made the most of her ample bosum
and perfect hourglass figure. The swathes of fabric, wrapped over the
skirt in all directions created the most beautiful texture. She
continued the excess with opulent jewelry by Harry Winston – heavily
diamond studded chandelier earrings, two cuffs in her left arm, and a
ring each on both her middle fingers. Sofie also managed to hit another
of the nights standout trends with her choice of colour.

A blue mist had most definitely descended upon Beverly Hills with Michelle Williams, Jodie Foster, Freida Pinto, Sarah Michelle Geller, Berenice Bejo and Tilda Swinton pretty much covering the spectrum of blues, from aqua marine to the sultry midnight hues.

I really wanted to love Sarah Michelle Gellers voluminous
gown, but I think I would advise her to ignore her 2 year old daughters
style advice in the future. I love to see stars experiment, so I applaud
her for giving this artistic Monique L’Huillier an outing, but
something didn’t quite work for me. I can imagine someone like Gwen
Stefani pulling this look off, but SMG delicate features and safe hair
just don’t make for a happy marriage.
I adore the deep blue of  Michelle Williams velvet/sheer
floor-draping Jason Wu dress but I think the look could have had more
pop if her cutsie pixie crop had maintained the peroxide tone of
Marilyns hair, rather than the muted strawberry blonde she is currently
sporting.
I know that Tilda Swintons style polarizes opinion, but on the
most part I adore her unique occasion looks. This may well be her most
fabulous ensemble to date, having looked to the talents of her friend
Haider Ackerman. The colour, a soft powder blue, with a small drop of
lavender, was ethereally stunning against her pale skin and barely-there
make-up. Along with her on-trend quiff of golden hair, the perfectly
tailored nipped in blazer added the androgynous element, an aspect
consistently present with Tilda. Juxtaposing the suited top, which was
made even cooler by the popped collar, was a semi-sheer ultra-feminine
mermaid skirt. Pure Perfection…

There had been much chatter regarding Angelina Jolie’s fashion
choice. She has been opting for relatively safe options of late, but
with the memory of last years emerald backless show-stopper, the fashion
press were expecting big things from the pouty one. She came up trumps
once again, with a bold  asymmetric, satin Atelier Versace gown, which
was given interest via a contrasting flash of red, which was mirrored by
her scarlet lips. A strong graphic yet classic look.

Returning to the Golden Globes as a new mum, after last years tricky task of awards dressing with a sizable bump, Natalie Portman
looked a classic beauty in Lanvin. A dress which contrasted hot pink
satin with slivers of burgundy red. The side detailing was a bit
distracting however, and added unneeded bulk to her petite frame. Rich
maroons and wine shades were also sported by current ‘IT’ funny gal Emma
Stone, queen of comedy Tina Fey… and even daredevil host Ricky
Gervais.

Aware of its flattering ways, there were of course a number of black beauties on display. Julianne Moore
added over-sized green earrings to add oomph to her figure hugging
tiered gown. Despite having endless glorious possibilities as the face
Dior, unfortunately the beguiling Mila Kunis sightly underwhelmed in her one strap chiffon gown. The tiny yet impossibly curvaceous Salma Hayek
added a metallic element to her Noir, with gold panels that can hinted
to Art Deco, Roman armory and even Cleopatra. She kept her look youthful
with dip-dyed curled hair left down, matched perfectly with a sexy
smoky eye. Completing the black parade was Glee’s hilarious matriarch Jane Lynch,
in a simple halter neck floor length dress. Her young Glee co-star Naya
Rivera opted for a fairly conservative, covered-up slate number, with Amber Riley and Diane Agron daring to don dramatic tomato red. Agron and the show’s former arch-rival Leah Michelle
both acted as perfect clothes horses for intricate designs, with a
laser cute Giles Deacon and an astonishing gun-metal Marchesa
creation….

A quick P.S . If there was an award for the most enthusiastic poser  it would go to Lea Michelle… that girl is a paps dream!

Obviously
style  is a subjective thing…I’d be interested to hear who you all
thought were best and worst dressed from the night. Please do let me
know what you think!