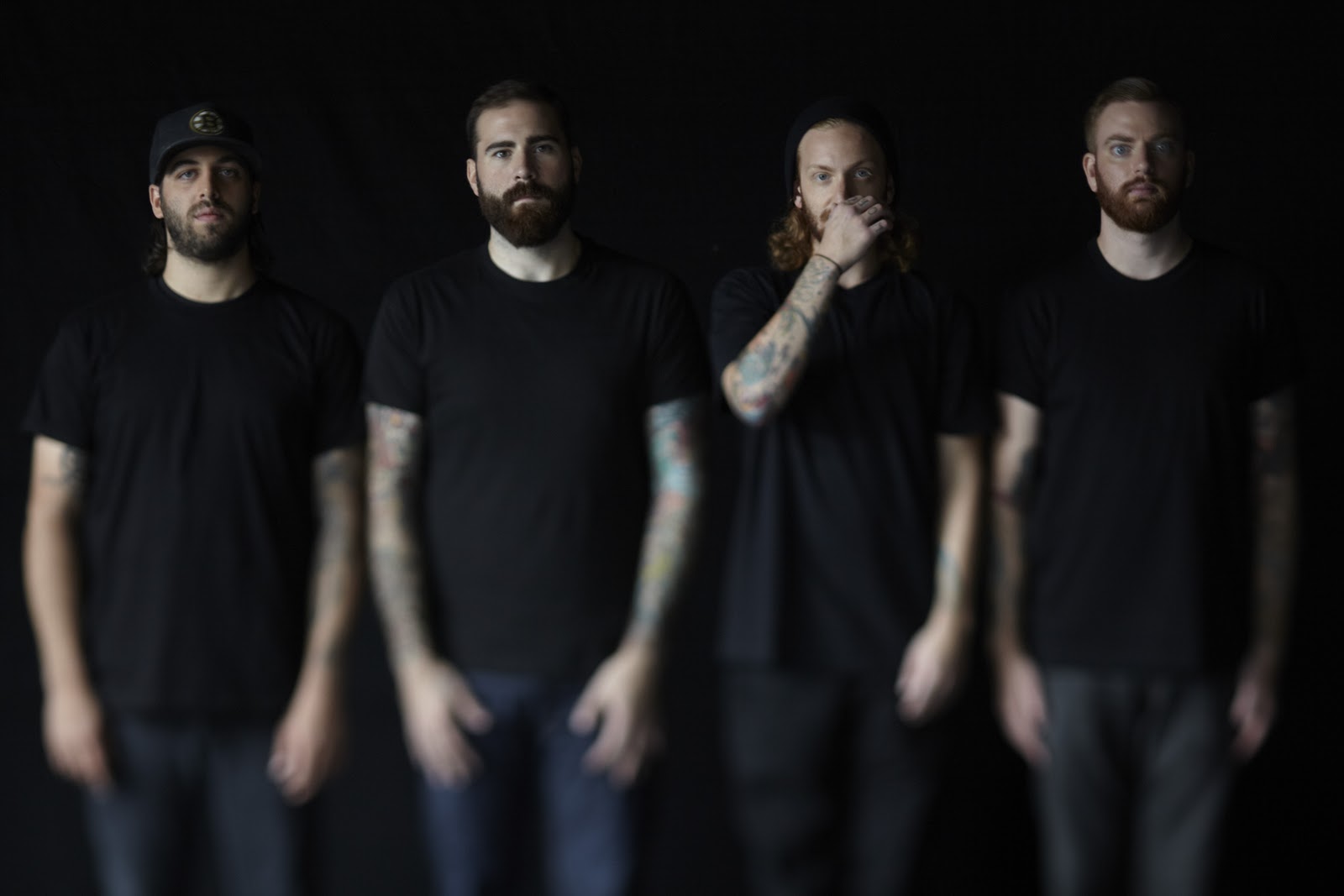 November 11th saw Massachusetts’ Four Year Strong release their fourth studio album, ” In Some Way, Shape or Form”.
There was a palpable sense of anticipation concerning the release –
following the departure of key/synth player Josh Lyford, and much
chatter surrounding a rockier new sound. Before Christmas, I had the
chance to question guitarist and vocalist Alan Day about band morale
following the line-up change, as well as their supposed ‘new
direction.’  I also wondered, as a musician so accustomed to being on
the road, how he’d adapt and make the most of  his brief festive
break…

You’ve been on the AP tour with some great bands including our
very own Gallows. From reading tweets it seems like you’ve all had a
blast together, although some seem to be suffering from life on the
road?

Not too much.  Touring with them was awesome.  It was really fun to hang out with some cool bands and play some cool shows.

Like yourselves, Gallows have had a member departure. How did
their new lineup/sound seem to go down with the US crowds? How have you
felt touring minus a member?

Their show was awesome.  We never got to play with them without
Frank.  There didn’t seem to be anything lacking.  Obviously when we
first started touring it was weird as a four piece, but now we are
holding our own and couldn’t be happier.

Your change in direction has been well documented. Was this change
something that evolved organically during the writing or process or did
you approach the sessions saying you wanted to aim for a particular
sound?

We didn’t go into it thinking of a particular sound, but we did want
to do something different.  We just kind of went in with the mentality
to have an open mind and I think it came out well.

Did you worry about what your fans would think or was it more important
to you to maintain integrity and produce a record that you truly
believed in and wanted to make?

There’s always thought about how fans will react to the new tone.  It
was very important to put out a record we’re proud of.  We owe that to
ourselves and our fans.  People get stuck in their comfort zones.  Our
focus was to make a Four Year Strong album we didn’t know we could make.

You worked with David Bendeth – who has worked with a ridiculous amount
of great bands. A producer obviously helps to shape the sound of a
record, but how big do you think his influence was on the direction?

I think David had a lot to do with us staying focused.  Even when we
were writing songs he knew we wanted to push ourselves further and he
helped make sure that happened.  We didn’t know what directions these
songs were going in, and David helped hone those songs.

It’s hard to predict how well personalities and musical tastes of
band/producer will work together.Was it pretty smooth going for you?

At the beginning it wasn’t.  David is known for taking a band and
tearing them down and rebuilding them.  We didn’t know what the sound
was going to be, we just knew it would be different.  We had to
understand how he worked and he had to understand how we worked.  He
made sure everything was played to perfection.  He’d say, “I’m not going
into the computer and making changes so play it as good as possible.”

It has been reported that the lack of certain instrumentation on
the new record lead to the departure of Josh. Was this is a particularly
arduous and awkward time for you all? Was it pretty soon after that you
had confirmation it was the right move – that the band felt tighter
than before?

Yeah.  It was pretty soon after that we began to have a lot more
communication.  We were new again.  There was a while we were getting
upset because things were becoming routine.  We made this band because
making music is fun and it didn’t feel like that anymore.  But once Josh
left, things felt a lot better and still do.

Is there a chance that another direction could require new instrumentation and another member as some point?

Have you started to consider the next album and its sounds yet?

We are always writing, but our current album “In Some Way, Shape, or
Form.” is still new.  It will be a little while before we sit down and
discuss that.  We are organic with Four Year Strong – you never know
what you’re going to get until it’s done.  We like it that way.

You seem to enjoy getting stuck in with your videos. Any plans to do movie cameos or have a four year strong movie?

It would be awesome, but no plans.  Making videos is something we
really like doing.  If someone asked me to be in a movie I would
definitely say yes.

After Christmas you have some shows with Set Your goals, Balance
and Composure, Transit and Diamond. Will you be treating the audience to
any festive musical treats?

We don’t know yet.  We have talked about doing holiday related songs.  I wouldn’t say no…

Early January you head to Brazil with Every Time I die and New
Found Glory. They are much loved in the UK. Do they draw similarly large
audiences and admiration in Brazil?

I believe so.  I’ve never been to Brazil, so I guess I’ll let you know when we get back.

You have always cited New Found Glory as one of your inspirations.
How does it feel when you get to play alongside people that either made
you want to be in a band or inform your sound?

It’s awesome!  The last tour was with Rise Against and Bad Religion,
and it was insane every night.  Definitely very inspiring to be around
bands like that.  We’ve played with New Found Glory and to be able to
say that they’re some of our best friends is very cool.

How do you cope with meeting heroes in the industry in general. Do
you manage to play it cool? (House of Pain at Sonisphere for example)

I actually didn’t meet House of Pain, but as for us meeting people
goes I don’t really get star struck.  I usually admire them for what
they’ve done, knowing where they’re at.  It’s definitely very cool.

It sounds like an ideal scenario to go and play you music in the
likes of Brazil, but do countries with extreme temperatures and
‘different’ cuisines prove to make touring pretty hard at times?

No, if anything it makes it easier.  When you’re doing the same thing
over and over it gets run down.  But when you get to play and
experience a new place, that’s the coolest part about touring.

You are probably used to it as you seem to always be on a tour, but are there any aspects that are still tough to deal with?

It’s hard being away from home, my friends and family.  Being away
from my wife and parents.  The hardest part is knowing life is
continuing when you’re not home. It’s a give and take.

Can you paint a picture of your van/bus environment?

Our van is usually very messy.  We have a lot of doo-dads – when we
went to Japan, one fan gave us a plastic plant that flaps around when
it’s in the sun and we have a little stuffed E.T. always holding onto
the door handle.  I never leave for tour without my iPod.

Is it hard to adapt to being at home when you return. Despite enjoying
the home comforts a lot of my friends in bands say they feel a bit at a
loss when they are off tour?

It’s weird when you come home, because you go from being on 24/7.
That first week you definitely have to adapt.  It’s like you wake up the
first day at home.  No one’s around, nothings been that quiet for three
months.

You have a few days off from playing over Christmas. What do you intend to do with this time?

Hang with family, do some cool stuff with the wife.  Living life, not really planning much.  Just winging each day.

You are gracing our shores again in the new year. Apart from
Nandos and Wagamamas, what do you look forward to about life on the road
in the UK?

The UK is always awesome.  Fans treat us really well.  I know every
show in the UK is going to be insane.  Every time I go I get to see some
new, amazing castle.

It definitely has to do with the music.  We never met Don Broco so we
are looking forward to meeting those guys.  The music comes first. You
never know what people are going to be like. It’s cool going on tour and
learning so much about new people.

As well as Sonisphere, you appeared to have a very fun time at
Hevy this summer. Do you think there is something special about UK
festivals? Does you enjoyment depend on your sleep deprivation and the
rider?

It has to do with sleep deprivation for sure.  But yeah, festivals in the UK are definitely special.

Can you give us a clue as to what festivals we may see you at in 2012?

I wish I could but it’s too far out to know. Hopefully we get invited back, my fingers are crossed.

What is on your Xmas Wishlist?

A pair of boots. Other than that I don’t know yet.  I’m bad at making
lists.  It’s more fun like that, to see how well people know you.

If it was anyone dead or alive, I would have to say John Lennon and Kurt Cobain.  They were amazing song writers.

Something surprising about you…

I’ve never really been big in new years resolutions.  If I had to, it
would probably be to stop spending money on dumb stuff.  I’m like a big
kid, big gadget guy.  Hopefully next year I will be happy with what I
got.