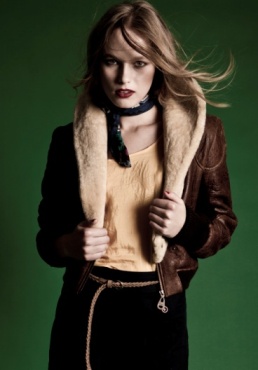 With London Fashion Week drawing near, an event showcasing what we should be wrapping up in come the end of the year, charity Elizabeth Finn Care is celebrating
all things fashion by auctioning a selection of unique items, donated by top celebrities and designers.

At Elizabeth Finn
Care, a national charity whose grants team offers financial support to
those in need, we know people can struggle to afford
the items of winter clothing they need to stay warm and healthy during
the colder months. There are 13.5 million people living below the
poverty line in the UK, among them 3.8 million children. Through Wrap Up Against Poverty, money to help buy more people in financial need buy essential clothes.

The inaugural
Wrap Up Against Poverty campaign was launched in 2011. Over half
the people the charity helps had to go without new clothes before they
made the approach. By bidding for the fabulous pieces available, the
public can not only boost their style credentials
but also enable people in financial need survive the winter months.

Each
item available reflects both the style and personality of the
individual or designer who has donated it.  Bidders can go for the
classic
look of Sienna Miller’s Doma fleece coat, or follow in Dame Helen Mirren’s footsteps by opting for her beautiful
Alberta Ferretti coat.  Glamour puss Kimberley Walsh’s plush Louis Vuitton scarf will be up for grabs too, as will a beautiful Alexander McQueen suit from
Fern Britton, and stylish winter coats from comedy heroes Mathew Horne and
Ruth Jones. To add to a spectacular celebrity list, exclusive designer items including a golden
Martina Spetlova shift dress have been donated alongside beautiful items from high street stores such as
Ted Baker and Topshop.

Wrap
Up Against Poverty was a huge hit in 2011, raising both funds and
awareness of the fact that millions of people in the UK are living in
financial
need and many can’t afford to clothe themselves through winter.  Wrap Up Against Poverty 2012 will be even greater and grander.

Malcolm Tyndall, Director at Elizabeth Finn Care, said: “We hope that, with the generous support of top celebrities and the fashion industry,
not to mention an incredibly enthusiastic public, Wrap Up Against Poverty 2012 will enable us to help even more people find and access the help they desperately need.”

Following the move to the digital catwalk, Elizabeth Finn Care’s auction will be hosted on eBay from Thursday 26th  January, and will
close on Sunday 26th February.  The list of donations is
growing longer by the day. To see the latest celebrity and designer
winter items up for grabs, please go to
www.elizabethfinncare.org.uk/WrapUp