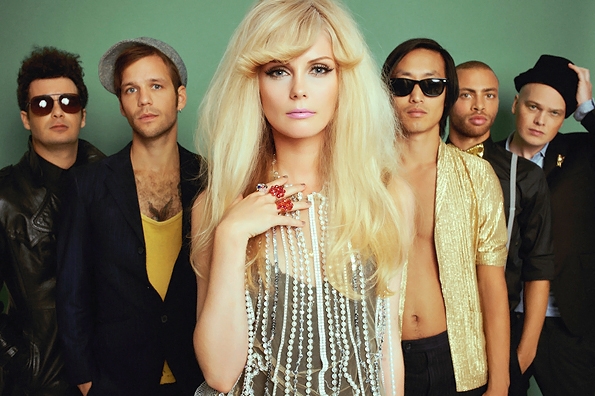 My eyes first set of the delicately impish features of Mette during a
particularly humorous episode of now flailing BBC2 show ‘Never Mind The
Buzzcocks’. In awe of her beauty I must admit that I wasn’t particularly
tickled by the prospect of having to appear next to the blonde
Bardot’esque babe…. I wonder if Phil Jupitus felt the same. Probably
not.

She was even lovelier in the flesh, looking like a retro Sci-fi
character/superhero in a monster green top and fitted black trousers,
which were accessorized with a matching green go faster stripe – an
image sexed up by her oomph-d mane of white blonde hair and gold
glittered eyes. You’d be forgiven for being a tad resentful if it wasn’t
for Mettes sparky personality which instantly endears.

Before chatting all things band related we momentarily gazed through the
glass of the upstairs bar to observe the young support band
sound-checking on stage – both confirming that we were enjoying the view
and in particular the front-mans impressive curly locks. After our
brief bonding thanks over the allure of a male musician we put a stop to
the digression….

Ms Lindberg met Lars Iverson about ten years ago through the Danish
music scene. Since discovering a mutual musical ground and a successful
creative partnership they have become the masterminds behind the
ever-changing traveling collective/troop/family known as The Asteroid
Galaxy Tour. Although they would never describe it as a duo they are
most definitely the eccentric ‘anything is possible’ scientists behind
the unorthodox and psychedelic formula.

We were chatting a few hours ahead of their one-off gig at the Scala, a
night which would kick off a lengthy run of European shows and mark a
return to a city that haven’t played for about a year. Their current
carnation consists of six people, but due to a problem with one of their
horn players coming from the US they hired another to cover, only for
the problem to be solved. This would mean three horn players for
tonight’s show, something which didn’t seem to perturb Mette in the
slightest. But this attitude is completely in-keeping with their ethos, a
refreshingly hippy ordered chaos, where you can imagine the term ‘more
the merrier’ would always be welcomed.

I wanted to find out how their new album ‘Out of Frequency’ has moved on
from their previous album ‘Fruit’ and what influenced the sound during
the year it took to create. I wondered whether the studio’s location in
the red light district had anything to do with funk-psych-pop madness,
or whether it is simply an amalgamation formed from their time on the
road soaking up all the differing sights and cultures, and their unusual
mix of Music and TV favourites.

If you want to get a taster for the latest material check out the groovy
(can we still use that word?) video for the first single ‘Heart
Attack’, but I’d thoroughly recommend you revel in their unrivaled party
vibe and get yourself to a show when possible!