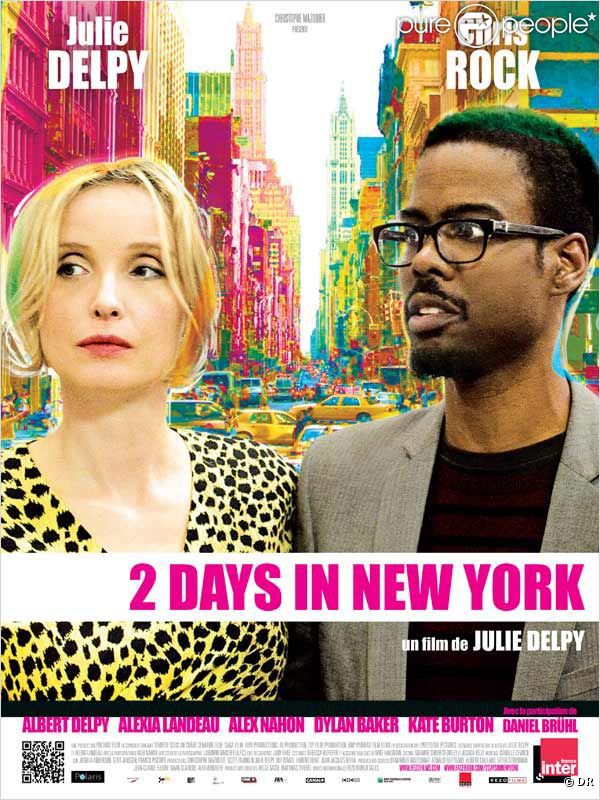 I am a kind of drug pusher of the arts world – although my aim is to
take you on some brilliant trips my ‘pills’ have no adverse affects. If I
love a music video I make sure to send out the links on various social
media connectors. If I love an album or song I try my best to put it on
during car journeys or advert breaks so to inflict it on my family or
friends (whether they like it or not), and if I like a film I urge
others to watch by pushing my own purchased copy on them. Two Days in
Paris is the Class A of all my cinematic addictions, the film I pester
people to watch more than any other… but all takers report a great
high during and after.

The multi-talented Julie Delpy had won me over a long time ago. Her
duet of romantic moves ‘Before Sunset’ and ‘After Sunrise’, which saw
her as the intriguing female lead alongside the rather craggy heartthrob
Ethan Hawke, successfully defrosted my bitter-d heart and proved to be
the perfect anecdote to the formulaic Hollywood ‘romantic’ movies that
dilute our box offices. But despite by existing respect for the
Director/Writer/Actress etc, I was not prepared for the wonderful chaos
of French farce that occupied 2 Days in Paris.

The follow up to the 2007 release replaces the male lead, Adam
Goldberg, with comedian Chris Rock – a change which immediately put my
back up. The frowning bearded one was one of my favourite things about
Two Days in Paris. I enjoyed battling my conscience when I cheered on
his misdirection of the American ‘code breaking’ tourists. I could
relate to his over opinionated views and his darkly cynical outlooks.
Most of all I sympathized with the vexed interior designer as he came
increasingly uneasy with the revelations that unfurled regarding Marions
former sex life, and her public and somewhat unhinged and self
destructive behavior.

A lot of chatter about the film has commented on Chris Rock’s pivotal
part as unlikely or a surprising feature of this largely French film.
We have become accustomed to his intentionally shocking outbursts –
tirades which are predominantly directed at pampered celebrities. We are
used to his shrill tone, words at double speed and with his devil may
care attitude when it comes to people’s feelings. As Marion’s current
partner Mingus we see a far more measured character, a straight-forward
man who actually appears to be one of the most understated.. and
‘normal’ of the whole gang. Despite my sadness at the omitting of
Goldberg I did muse on the fact that the casting decision for NY could
lead to larger audiences enjoying Delpy’s marvelous work.. and if that
proves to be the case I support it.

Using snapshots, Delpy’s usual revealing commentary and children’s
hand puppets, we are brought up to speed on what has changed since the
last gallic outing. Artist/Photographer Marion and Radio
personality/journalist Mingus share a NY apartment with their kids from
previous relationships. Once again we see Marion’s partner facing the
prospect of meeting her colourful family for the first time. A life
landmark which is pitted with hazards at the best of times, but is
potentially deal-breaking when your family is as madcap as hers.

One of the earliest scenes sees the family held at American customs,
having stuffed their garments and bags with a innumerable amount of
stereotypical French food goods. The quite revolting sight of a mass of
sausages and cheese, which you can almost smell through the screen,
proving to be a great comic introduction.  Although this is a tad
ridiculous and one of the scenes that veers away from the realness
factor that I love about these movies, it does serve to remind us of
another standout performance of the first film.

In the previous film Delpy’s real life father had helped create some
of the most memorable scenes, and they have capitalized on his
inappropriate behavior and verbal discrepancies in this movie –  the
family making allowances for his bullishness due to his age and widow
status. At times his schoolboy mischief verges on criminal, and it is
extremely entertaining to watch.

It’s Marion’s commitment to him in spite of his social mishaps and
disruption of her and Mingus’ NY family unit, that is the warm backbone
of the film. Put everything aside and what you have is the sense of
family and the commitments and trials that come with. This is apparent
with her forgiveness of her unlikeable sister, and is also bolstered by
watching how Marion’s and Mingus’ united families interact throughout
the unfolding chaos.

There are some tender moments between Delpy and her sister Rose,
played by Landeau (who is the co -screenwriter), but in many ways it
still feels like the younger brunette sister revels in being able to
stir up a bit of trouble… and more than a little sexual awkwardness
thanks to her inappropriate habit for baring flesh. Their sparky
relationship helps to create one of the best scenes of the movie, taking
place around the family dinner table. Here we see them utilize their
unrivaled knowledge of each-others many flaws, lacking’s and life
mishaps in a spiraling war of words, which ends up being a
uncontrollable discordant symphony of language and intelligent
catty-ness.

A more surprising return comes in the form of the infuriating Manu
(Alex Nahon), a naive yet wholly pretentious artist ex of Marion, who is
now dating Rose, her argumentative, sexual predator of a sister. His
disregard of human decency and respect when it comes to staying at
someone else’s home reaches epic lows when he invites a drug dealer to
the house. His childish and oblivious behavior amuses and annoys in
equal measure.. which I guess is the point. Another comedic aspect to
the character, something which we’d already witnessed when he met Jack
in Paris, is his dire attempts fit in with American Culture by saying
‘homey’ and alike. That theme continues in this movie, but to rather
larger extremes.

The strength of both this and the first venture is the dialogue.
You’d forget that these people were actors playing characters if they
weren’t so enviably/unrealistically quick with their wit, and with the
ability to use multilingual, cross-cultural references with such
ease.The other is that it covers events we have or might have to deal
with in our lifetimes. Although there are extreme moments, in terms of
the turn of events and emotional behavior,  there is something very real
about these films. There is enough of the human element to make them
relate-able, but it is also ludicrous enough that a viewing works as en
escape.

I thoroughly enjoyed the film and came out itching to regale some of
the cringiest of laugh out loud moments with the other critics, all of
whom appeared as tickled as me in the Fox  screening room. But despite
its many successes it didn’t match the perfection of 2 Days in Paris.
For me, the former was flawless and the hysterical interplay between
Goldberg and Delpy made for a more interesting dynamic than the to and
fro’s between the NY couple. That statement is in no way a damning of
the outrageous comedians performance though. Chris Rock will gain a lot
from this film, in terms of it showcasing another facet to his talents
and broadening his appeal – he played the character he was given
perfectly and like Goldberg was endearing enough that you sympathized
with his position. In fact there wasn’t a weak performance throughout,
but there was a rather strange and unexpected cameo (one that I won’t
give away) – an appearance which results from another ‘artistic’ Marion
meltdown when she decides to sell her soul and verbally abuse an
unimpressed critic.

In fairness a large part of the joy of watching …in Paris was that I
wasn’t aware that I was in for such a treat, but with …New York I had
sizable expectations. That’s why I don’t want any of the Culture
Compass readers to be put off by any of my nit-picking in this review.
Two Days in New York is still a 8/10 movie delight and is mainly
hindered by having such a perfect predecessor.