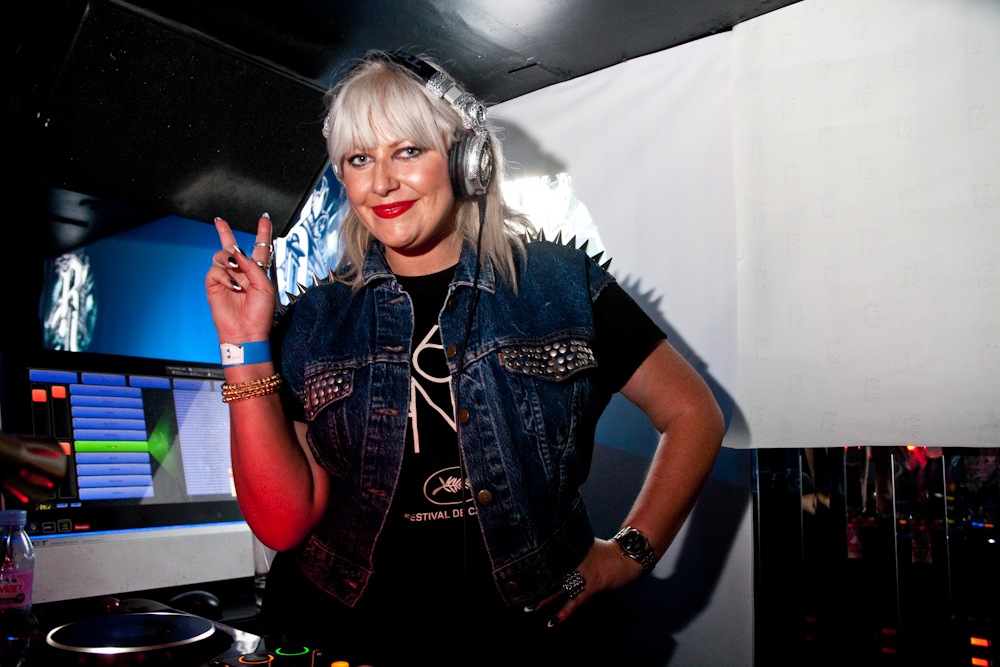 Firstly, what do you think of the new Relentless Energy Drink flavour and did you have fun DJing the launch? (What tunes did you play)

I had so much fun! There are not many times when I DJ and I don’t have fun. It’s our job as DJ’s to bring the fun. Relentless Energy Drink brought the flavour and the alcohol! I played lots of new new records, unreleased and UK music, from Zinc, to Shystie, Ms Dynamite, Rudimental, Rita Ora mixed with 90s hip hop Busta, Luda, Missy, SWV, Genuine and my brother and the other half of Beatnik played house and electronic, Daft Punk, Hot Chip, Labrynth, Donaeo, Kelis. It was a dope mix of music.

Relentless Energy Drink is know for its affiliation with extreme sports. Do you do anything extreme?

My whole life has been extremes, Im very rarely on the fence about anything. I have burned the candle DJing and traveling for 15 yearrs and had lots of close shaves. The other day I decided to go see where I grew up in the Scottish Highlands and drove 12 hours straight to get home….that was extreme driving!!!

You get to travel the world with your work on these tours as well as for various fashion/consumer/brand events.. What are your travel must haves?

Travel must haves are comfy cashmere & jersey mix clothes that are not tight! A long scarf which can double up as a blanket. A great bag for my DJ stuff, either a Chanel cocoon or Burberry Knight. A leather biker jacket and layers. The little plastic containers filled with conditioner, shampoo and bronzers for stage. A sleep mask and a blow-up neck pillow are saviors on long haul flights, as are american sleeping pills! Half of one of them and you get a great sleep, the only kind of drugs I take!  Im always on the hunt for the perfect ‘Airport boot’ one that is stylish, goes with everything from skirts to jeans, has a 2-3 inch heel and is comfy for walking to gates with bags! I currently have my eye on some Bionda Castana Biker boots and some Zanotti biker boots.

I think you began DJing at the age of 16, what spurred you to give it a go for the first time?

I grew up in an amazing era of music for dance and for hip hop and the DJ was integral to that. I cant even explain it, but I started going to clubs at 14 and I just knew I wanted to DJ. I bought decks at 16 and went from there. It was a long route and hard at times but Im still very passionate about our craft and what amazing things real DJ’s bring to music.

What did you family think about you pursuing a career as a Producer/DJ?

My family are very supportive- they didn’t really fully understand, but there were hours of loud music and practice and they weren’t phased. They even had a big 21st Birthday party for me at our house with a full on sound system and DJ’s, hundreds of people, and they cooked for everyone, it went on till 4/5am and they never complained. I would not be such an understanding parent. Recently I sent my Dad a picture of me with Ringo Starr and he printed it off the email and showed it to his mates. Very cute.

Are you and your brother at all competitive?

Nooooooo never, he and my sister and Kelis are my best friends in the world. We have hung out with each other constantly since we were kids. If he needs something, ill make it happen and vice versa. Family is the most important thing in the world to me and working together is fun fun fun…we have different skill sets too, he is an uber geek and I’m an action chick- so it works perfectly.

Do you think there is an element of competition between DJ’s in general?

Hell yeah! All DJ’s are frenemies deep down, lol, but saying that some of my best friends are DJ’s and I wish them all the luck in the world because I know how hard it can be.

People look for different things from their DJ’s, for some it is all about their performance element and ability to interact with the crowd. What in your eyes are the attributes that make a top DJ?

I don’t really think its about a performance element. Sometimes you see that or DJ’s jumping around in a booth arms in the air and you know its a pre programmed show, so in essence, nothing is live. The most important thing is playing for the crowd and taking them on a journey. Skills are also imperative. You are not a DJ if you don’t have skills, mixing, scratching, transforming etc then there is the musical side of knowing what records go with what and when to play a tune and how long for. Play it for too long, people get bored and stop dancing, but similarly a lot of DJ’s now rush through records trying to bang them out- this also doesn’t work. Timing is everything. New technology can help a great DJ too, in that you can have more records at your fingertips, you can store trigger cue’s and loops, but ultimately if you are DJing and doing all this live- which is the Goal, you really don’t have time to be ‘performing’ you are concentrating on the decks and a hard working DJ will be doing interesting stuff. Also my final point would be NEVER PLAN A SET.

Has there ever been a crowd you haven’t been able to win over?

Not really, I travel with so much music and I have done everything from uber cool club kids east london parties to weddings for Aristocracy to Fashion parties & Festivals. If you have the ‘Fear’ then you could let yourself down, but you go out there fearless, you figure out your crowd & you make people dance. Its not rocket science 😉

On the outside jobs like playing for Jay Z and swish fashion parties sound like the best work to get in your field. But what factors actually make a job good for you?

The friends I have made in many different countries all across the world and experiencing many different cultures are amazing parts of my job. I now love love love making records and performing them live with my artists. Talented people make me happy, I especially like eccentrics in music.

You’ve played for Jay Z, J-Lo, Beyonce. How do you cope with the pressure of playing for such VIPs?

There really isn’t any pressure- its just the same as playing for any crowd. You just prep before you go as the Americans always want to hear their own material – after you have played their latest record, they relax. Sometimes their entourage can get a little bit excitable, but nothing major. Its all fun for me.

You’ve been Kelis tour DJ for a while. Where did she first come into contact with you? How did you react when you got the role?

erm it wasn’t a question of getting a role as such, we’ve known each other for 14 years and done bits and pieces forever…before Acapella came out she was doing some club gigs in the US with my friend DJ Rashida then she called me and said ‘wanna work tomorrow’ and I said yes and we formed what I called ‘ The Crazies’ on tour, due to our eventful outfits, hair traumas and make up etc . I can honestly say its been a blast !

Can you tell us something surprising about Kelis ?

How long does it take for you feel completely comfortable when you work with  musical ‘stars’ ?

In your down time with the likes of Kelis and Jay Z do you ever have impromptu writing sessions?

Yeah with Kelis for bits and pieces of new album .

I believe you have quite a thing for shoes. If you had to pick one pair you own which is your favourite?

A lot of male DJs are fairly bland when it comes to their attire. A lot of females are glamorous or funky with their fashion. Do you feel there is a pressure to appear a certain way?

Not at all! Me and Kelis joke that my on- stage outfit is basically my airport outfit with a pair of heels. I just wear whatever I like day in day out. My style is somewhere between Keith Richards, Dynasty & Salt & Peppa.

You are accomplished at songwriting and production. Did any part of you want to remain behind the scenes to avoid the negative stuff that comes with being known in the celebrity driven world?

Yes, most definitely. I find that whole ‘celebrity’ role and lifestyle very odd and difficult to process. It’s not really based on much these days apart from being photographed in a certain outfit at an event, I prefer genuine artists, Grace Jones, Kelis and you see some A list film stars who don’t qualify as celebrities as such because they just don’t get involved in that whole shenanigans. I’m not saying its bad- if that’s what make you tick and you want to be a celebrity- all good, but Its a very rough ride. I never wanted to be a celebrity, I only ever wanted to be a DJ.

What do you put your success down to?

Hard work, bloody mindedness, outspokenness, being nice but not a walk over, talent & hard work.

Who are your favourite designers?

My favourite designers are Chanel, Burberry, key pieces, amazing accessories and Vivienne
Westwood amongst others. I also love KTZ and for shoes and bags there are some gorgeous Mulberry shoes I need in my life right now…but really I pick and choose bits of designer and mix it with Topshop, Vintage, River Island & Asos    Most glamorous moment?
I don’t think I’ve had one yet…..the other day in Boots the cashier shouted ‘you look very glamourous’ at me across the shop. I guess thats it!   What is on your shopping list right now?
About 52 saved items in my ASOS shopping basket, plus Mulberry heels, Bionda Castana biker boots, Wildfox T-Shirts and jumper, Blackmilk leggings, Chanel Bag, the list goes on…..

I want to make a record with Omar. I love his voice so much. I’d also like to work with Beth Ditto, Peaches, Grace Jones & Iggy Pop and Beenieman.   Career Highlight?
Probably sitting in the back of a limo with Sir Tom Jones on a night out, who I think is the hottest older dude ever. Hot hot hot. LOVE U TOM   !

What are your guilty pleasures?

Tom Jones & Action Movies. I watch all the Die Hards &  Transporters over and over. I love an action dude!

What projects are you working on at the moment?

Beatnik have an EP coming out and a bunch of cool singles, one is called Adidas Kicks and is a bass tune featuring Asher D, Natakie May, Sibley from LA, Harvey, Zest and Lingo Scott – we are about to shoot a video. I have tunes with Thundercat from LA too, who is a phenomenal bass player and a ton of other stuff. www.beatniktv.com

To make a load of amazing records, have fun & get married!!!! loooool