On 28th August, a mysterious individual called “The Insider“
will be hiding an EASTPAK bag containing £5,000 in cash somewhere in
London. During September, they will be giving entrants the chance to take
part in the EASTPAK Insider Trail to find and keep that elusive bag of cash…..

As well as ‘Get You Own Back,’ the cruel children’s revenge based TV show hosted by Dave Benson Philips, I really wanted to run around the various exotic and historic worlds of the The Crystal Maze with Richard O’Brian (who always looked stupendous in cowboy boots and animal print)…. if Jimmy Saville failed to make my other dreams come true of course.

Something about the adventure, camaraderie and the potential achievement of beating the tricking sand of time (as well as getting to don a boiler suit), was very appealing. I even resorted to seeking similar but somewhat downgraded thrills from Channel 5’s Fort Boyard when The Crystal Maze was off air. I will avoid going into detail about my trip to Maidenhead’s Crystal Maze interpretation though…

When Easpak got in touch to invite me to take part in the press preview version of the Insider Trail, I instantly reverted back to being an excitable and energetic youth, itching to take part in a challenge, even if there was a notable lack of wind machine and gold and silver leafs. An Eastpark bag for participants was enough allure… a bag, and a practical one at that… what more could my late twenty something self ask for!?

I was put in a group with two fellas, fellow media types, and a rep from Eastpak. As a group we would have to combine our geography knowledge and general intelligence, while drawing on all those qualities usually enhanced through enforced work team-building exercises. However, I didn’t factor in the need for fitness and efficient antiperspirant – the challenge falling on the hottest day of the year so far.

It takes a little while to gauge your place within a group. I know that when amongst my dearest friends I am the one that supplies music recommendations, a conveyer belt of embarrassing tales and bad love advice, but with these people that I’d only just met a few seconds ago I was unsure what I would offer (or be allowed to offer) in this scenario. We were all in the dark about about each-others levels of competitiveness, whether there was a natural leader in the group, whether we would listen to each-others opinions, whether we would all remain calm under time pressure, and whether any of us were good natural compasses and so on…

One of the group stamped his leader position early on, coming up with various possible answers to the cryptic clues sent to us via text, and taking ownership of the compact map we were given to aid her treasure hunt style exploration of East London. There’s a very obvious reason why I don’t take part in the family crossword session on snoozy Sundays. I did however use my vision, which according to my last Opticians test is in top top condition, to help scout for possible visual clues and answers, I also tried to keep morale high with various boosting responses to my teammates intelligent deductions.

There were a few instances during the challenge where I should have spoken up rather than presuming I was about to embarrass myself with my natural instincts. If I had dared to confidently voice my opinion we would have been able to move on to our next clue after a trip down the basement of a particularly cruel London gallery, but I was happy to just go with the flow and attempt to keep up as we dashed up various cobbled streets and never before seen graffiti-ed back alleys.

Both a aid and hinder to our progress was that of the appearance of our competitors.  If they were in the same vicinity or gazing up at at the same signs we’d presume we must be on the right track…and similarly if they quickly dashed in another direction we’d conclude that they’d cottoned onto the right location. If they were holding their heads in a superior manner or looking damn rigth chuffed with themselves we’d also presume they were getting through the clues swiftly and correctly…but the truth is they could have been sporting an orienteering version of a poker face.

Sadly for us, their smug faces were genuine and the result of being frankly far better than us, and we arrived looking rather blotchy and shiny at the final destination, which was already crowded with the more proficient map reading/ code breakers journalists tucking into their well earned lunch.

So accepting my losers wooden spoon wasn’t my proudest life moment, but to be honest I was pretty happy with the day’s events… a smashing primary red Eastpak rucksack, a new appreciation for East London and it’s unique culture, new acquaintances, and a few hours of feeling that adrenalin filled excitement I used to get from from treasure and easter egg hunts as a child.

Now, what excuse have you guys got not to take part… you’ll get all that with the potential for for a £5000 haul at the end of it!!

It’s completely free to enter, and all people have to do is register their interest on our website – insidertrail.eastpak.com – from this Wednesday (1st August). There are a limited number of places available; the Trail
runs over three weeks, with a new and exciting challenge set each week
that gives participants a chance to visit places in London they possibly
didn’t know existed, as well as trying to find that hidden bag of
money! 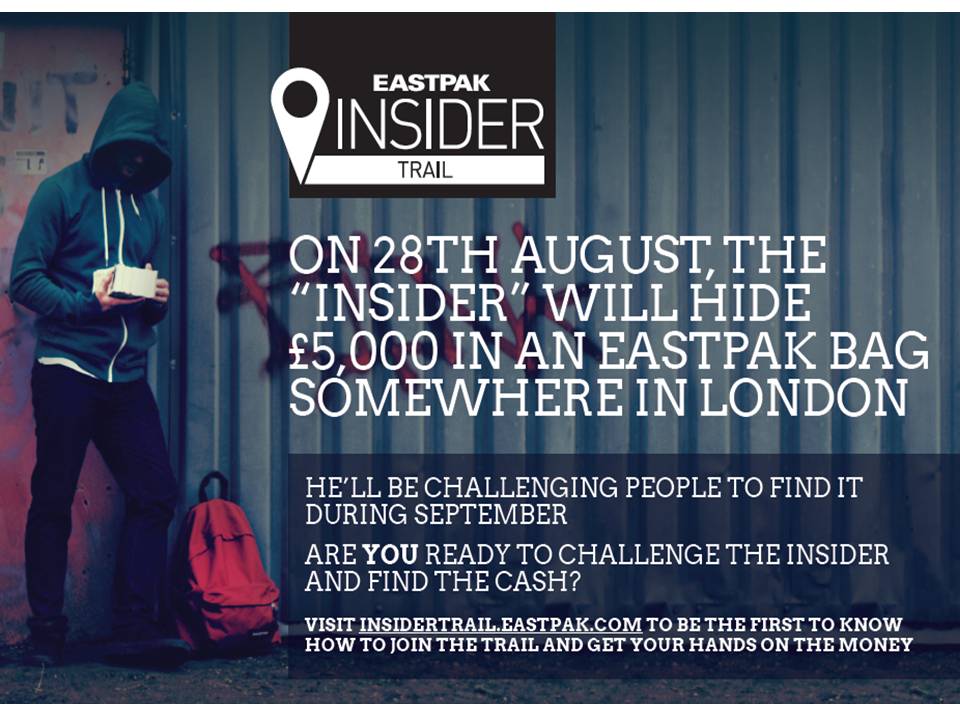