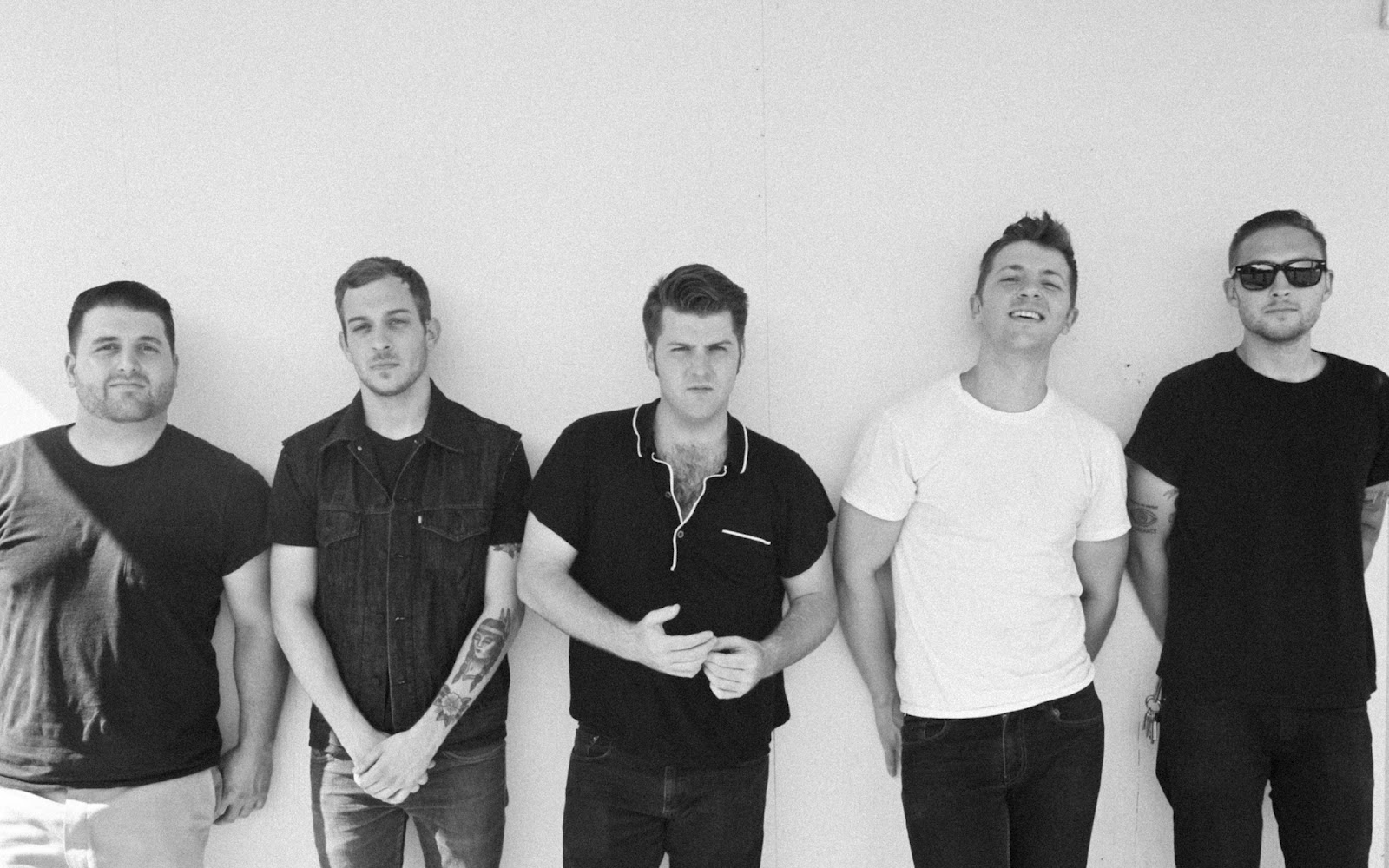 These are not easy times for my age bracket. We battle the same life
trials relating to love, heartbreak and betrayal that have always been
the backbones of literature and lyrical content, but we also feel a
weight of anxiety and stress thanks to struggles brought on my
questionable political decisions and financial down-turns. Obviously it
depends greatly upon where you live, the industries you work within, and
your personal circumstance, but for many people like myself, long hours
and hard work rarely equals sufficient financial reward. It may not be a
connection most commonly cited, but I wouldn’t be surprised if the
increase in depressed twenty something’s is largely down to self esteem
issues that arise as a result of the impact of the recession. While the
contents of their latest album ‘Please Remain Calm’, may not initially
appeal as an uplifting addition to your musical collection, it will be
one that tackles the social issues many other bands would be less
inclined to let dominate a record, and you may find comfort in listening
to Chris Martin and the gangs lyrical venting. I had the opportunity to
ask ‘Cmar’ about the bands he personally navigates to, how the album
came together with the help of producer J.Robbins, and how the
aforementioned issues effect him, in and out of the band….

You have said Minor Threat, Embrace, Dag Nasty, Fugazi are bands
that helped to shape your views on music, and gave you the push to
experiment with it. What current bands do you admire in terms of their
ethos and approach?

Ted Leo (Ted Leo and the Pharmacists) is certainly one of my favorite
songwriters/musicians. I think he’s one of the all-time greats. Moving,
urgent songs crafted with real care. I could sing his praises all day. I
will always back Title Fight for staying ethically punk despite
enormous success, and constantly involving their hometown crew in the
DIY operation of filling mail order or tour-work. The whole crew seems
like a family, and I think that closeness is reflected in the vibrancy
of the Wilkes-Barre scene that Title Fight calls home.

Are you a band that generally seeks musical inspiration from bands or movements from the past more than current scenes?

I think we draw on the energy and enthusiasm of this modern scene for
sure. I really hate the idea of trying to be like another band
musically, and I think that’s reflected in our music. I think we’ve
really taken more inspiration from what bands were about, rather
than trying to ape their music. I see what Dylan, or The Clash, or
Nirvana represented as counter cultural forces and am drawn to that sort
of thing.

It is quite normal to consider various options before deciding on a
producer for a record. When you chose J.Robbins, how important was the
fact that he was open to take on your opinions and ideas?

That was of central importance. We came to the studio with the album
as completely fleshed out as possible. We were not going to the studio
to get told what to do. We know what we’re doing when it comes to
crafting these songs, and J’s respect for that was really important to
us. That type of understanding helps foster a symbiotic relationship
where both the band and producer are working together, and not against
each other.


As a band are you generally on the same page about things or do
you tend to have to debate things out? If so how do you do that without
causing too much tension?

Musically, there’s little debate. Everything else: T-shirts, show
scheduling, and so forth, that’s all usually a struggle to organize.
There’s not usually tension. Everyone knows everyone else is trying to
help, and so the mutual goal of spreading our music and our love for
each other helps keep things copacetic. Most stress comes from all of us
living on different parts of the East Coast.

I’ve read some reviews for Please Remain Calm, and a few comment
on the prominence of the vocals, with interesting melodies and use of
harmonies. Was this a conscious decision or just something that
naturally occurred during the recording process?

It was consciously a lyrically driven and vocally driven record. Most
records that drive a real message or feeling tend to be vocal heavy,
and our writing process gives the utmost importance to a central,
driving vocal melody. .WE knew the lyrics had to capture the complexity
of the today’s social tension, and so we left a lot of room for the
vocals to be prominent.I’ve really come to resent the sound of vocals
clearly thrown over a guitar part. In Hostage Calm, either the vocal
melody comes first, or is written during the writing of the music, as to
ensure that the vocal melody will lead.

The consensus seems to be that you have maintained your trademark
sound but reinterpreted it in a way that shows that you have evolved
since your last release. Would you say this is fair statement? Do you
find it hard to analyze your own work and how do you cope with reading
reviews?

Well, so far all of the reviews have been spectacular. We’re very
lucky. So reading the reviews is great because it shows the connection
between these songs and the people listening. If we were getting
destroyed in the reviews, haha, who knows how I’d feel. I think your
assessment is fair, though: we’ve basically added clarity and cohesion
to these songs, making them stick a lot harder when listening. I think
this record has the vision, socially, that our last one hadn’t yet even
contemplated. It’s all the byproduct of a very tough time in my life,
and without that, I don’t think this record would have featured so
urgent sadness.

You music deals with the pain and trials that occur to our
generation thanks largely to the recession. Do you feel the record has
optimism to it still?

I think there’s always this sense of fighting back, ya know: win,
lose or draw. I think the record mainly acknowledges and interprets the
pain, but here and there, you see bright spots. I think the end of the
record reveals this common bond that so many young people now have due
to the lot we’ve been given economically. In that, I think there’s a
great deal of optimism. We’re closer. Our generation has been forged by a
common, defining moment, and hopefully that will breed some
understanding going forward.

Did you find the process of writing the lyrics was quite heavy for you mentally?

Yeah, it was kind of destroying me. I was already struggling in my
financial and personal life, and I think I went through a tough time
where I really looked at my life and had to acknowledge that I didn’t
like a lot of what I saw. And that hurt. But you have to learn to walk
tall with your triumphs and failures, and I think this record helped me
to do that.

How has the current downturn affected you guys personally, in terms of the band and your lives in general?

Everyone in the band has low-incomes. We all struggle to be musicians
and to live our dreams. Gas is high, the prospects for work are low,
and college loan officers are constantly on top of you. We all see
neighbors and family losing their houses and livelihoods and it seems
like one of us is never that far away from being in that same place.

You have said when you toured with Anti Flag you tried to watch
them and learn how to be a life-changing band. So what did you notice
and what have you since implemented or changed about what you do?

They just play with such passion and expertise. They know how to work
their songs. They know how to work their crowd. They know how to play
as a well-oiled machine. The list goes on, but they are really the
definition of a great live band.
Bands like The Clash, Fugazi and Ramones have always been vocal
about issues that needed a spotlight on them. Do you almost consider is a
responsibility to use your music and reach in this way, or do you just
see it as a method of encouraging more people to be proactive in
changing things?

There’s just that natural gravity that pulls us towards those topics.
Growing up, we understood punk to be equally the social force it was as
a musical force. I can’t imagine what else there is to make music
about. The word “responsibility” conjures up this idea of us going
through the motions or talking about real issues begrudgingly, out of
duty. So I wouldn’t describe it as doing it out of responsibility. I
think we make honest music, and I think the focus on the
broken-heartedness in America and in young people across the world is a
reflection of our lot in life.

‘Hostage Calm are five gentlemen who specialize in producing and
performing rock-punk, while clinging to and celebrating what
juvenescence they have left’. Can you tell me how you channel your inner
youngster? What ways is it exposed?

I think playing in a punk band has certainly kept my inner youngster
alive. When you have the vibrant energy of punk pumping through your
veins, you feel like you’re thirteen. In the good way.
Song you wish you’d written and why?
Almost any Billy Joel song. Uptown Girl, Still Rock’n’Roll to Me,
Only the Good Die Young, Piano Man. He’s a master of the craft.

Recently played on your ipod?
Simon and Garfunkel – Keep the Customer Satisfied

We’ve never played Gilman Street, or Chain Reaction in California. I’d like to play both of those places.

Something surprising about you?
I’m an Eagle Scout (the highest rank in Boy Scouts of America).