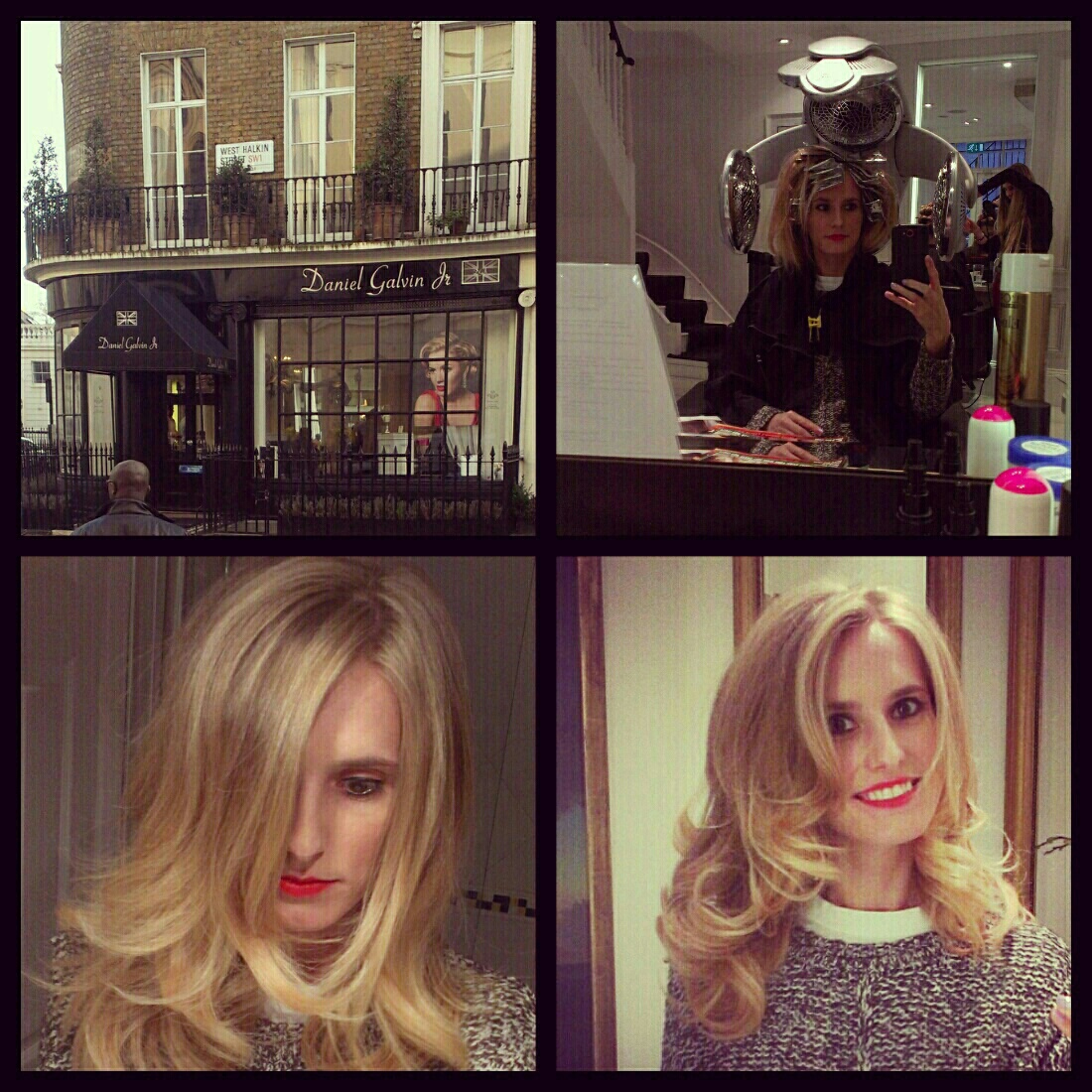 As well as the ‘show ‘em what they’re missing’ post break up makeover, a new year poses as an ideal excuse to renovate your aesthetics.

During my last visit to Daniel Galvin Junior’s Salon I had detailed my numerous past hair disasters, which culminated in a fear and mistrust of salons, and in particular dye jobs. Daniel kindly took it upon himself to show me an opposing experience by inviting me back to get my hair coloured at his lauded salon. After a horrendous Christmas period a pick me up via an afternoon of pampering and beautifying was very much in order and I was confident a trip to the plush Belgravia salon would lift my spirits as well as my roots!
I had also grown tired of my boyfriend looking at old pictures of my lighter-haired self and saying, ‘aww your hair looked so nice’, which as a women I naturally interpreted as meaning it doesn’t look good now.

Daniel’s protege Olyvia Abizadeh would have the responsibility of proving to me that colourists can listen and deliver a result that pleases while not completely destroying the condition of the hair. Initially she is one of those intimidating beauties. Long glossy dark waves, big brown eyes and looking effortlessly cool in leather trousers. Within seconds her warm down to earth nature was revealed and minutes later I was over sharing details of the inner workings of my private life and asking who her favourite member of Mcfly is. Aside for the talent housed in the salon, a winning aspect are the characters within, the relationships, the banter, and the generally relaxed and fun tone of the salon. Of course they are faultlessly polite, but there is none of the pretension and stiffness that you might expect for a salon that cares to the tresses of celebs (Made in Chelsea stars, Kelly Brook, Holly Valance Amanda Holden), and London’s well to do. It should be mentioned that some of the wonderful staff arrived as part of ‘Headstart’, a fantastic apprenticeship programme set up by Daniel in 2007 for disadvantaged young people, alongside the Prince’s Trust. 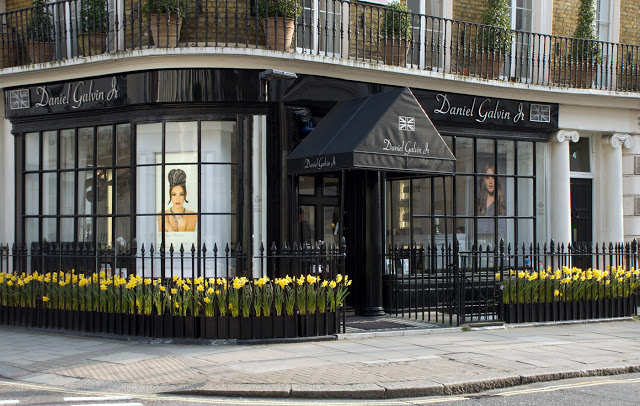 I went with a few images of the dream result for my visit to the Salon – think beachy highlights, made up of dark and light blonde shades (Elle McPherson, Nicole Richie, Lauren Conrad and random google image hotty). Although Olyvia agreed they were great looks, she observed that some some of the shades weren’t necessarily the best options for my colouring, Daniel agreed. She offered up an alternative idea, which would result in natural looking highlights that would imitate the sun drenched locks of a backpacking traveler or someone who has just come back from a beachy holiday. Another bonus of her wisely chosen technique/colours was that it would be low maintenance, which for a lazy groomer like myself is pretty much essential.

I had a natural-ish dip dye effect with sun drenched/lightened ends with a skin draining dark blonde taking up about half of the length. Olyvia’s idea was we wouldn’t go lighter than the dipped tips but bring some colour to the dull top. Rather than creating the define tiger stripes look favoured by my school mates in the 90’s, Olyvia took small strands throughout the layers of my hair which resulted in a look that could have easily been by cultivated by mother nature’s rays. She also created a halo affect with lightened strands framing my face.

After my hair was washed and glossed, Joe would be the guy on task to complete my transformation with a blow dry, which I’ve always said is the first regular luxury I would choose if my bank balance were to allow. I have just enough styling ability to create a flat, sleek look at home with a rub of serum and my GHDs, so if I have someone with skills at my disposal, the phrase ‘bigger the better’ is always voiced – and always with a slight titter. With a Spritz of Daniel’s volume spray and masterful round brush action by Joe my hair was put in rollers to secure its oomph-ed future.

Reveal time. The rollers were removed to reveal hair with height enough to please a TV ready member of Girls Aloud and tresses that glistened like gold – it was exactly what I’ve always wanted for my hair. A very 2013 way of knowing that you are pleased with the results is when you are compelled to find the nearest mirror (preferably in private) to take a few pouty selfies in order to create a nice ‘new hair’ montage on Instagram. Narcissistic…perhaps, but as a former salon skeptic my jubilation was worth sharing!

I avoided the shower for two day after (probably shouldn’t admit that) as I wanted to make the most of my do in its optimum state, knowing I wouldn’t be able to recreate perfected volume of that magnitude myself. Olyvia had said her aim was that when people saw me they’d say that my hair looks lovely, rather than making comment on a noticeable dye job.
My glamourous showcase for my new look was during a girly catch up at Nando’s. We went through the normal pleasantries, I responded to enquires about how I was with the usual stress tinged response, which was replied with, ‘well at least your hair looks good!”. I’d say that’s mission accomplished.

I was attempting to avoid a name drop, but *** that. As I was leaving the Belgravia salon, passing the line up of designer shops from Chanel to Prada, I saw a very grumpy looking Jose Mourinho coming towards me. As he passed he managed to relax the deep set frown (a tad) and dart an admiring look at my swishing oomph-ed hair. It would be accurate to say after that sort of nod of approval I stood up a little straighter and swished my hair with a little more vigor on the rest of my walk back to Knightsbridge station.

So as well as bit of self improvement to ones facade you may be making lifestyle choices too – by becoming ‘organic’ in 2013 for instance. Daniel was on this tack way before it became merely the trendy way to live. In 2000 he launched the first ever organic, professional, designer haircare range and has since collaborated with HRH Prince Charles to launch DUCHY Originals Natural luxury Collection and a range exclusive to Marks and Spencer.

Although I may be a bit lax on salon visits I will ensure I look after by golden mane from this point onwards using numerous Organic Head products.

To prevent my hair returning to its former straw like status I will be using the Detox Masque (£4.00) which revives colour as well as smoothing the lengths to ensure a mirror like shine. It also adds volume by removing by removing product build up. 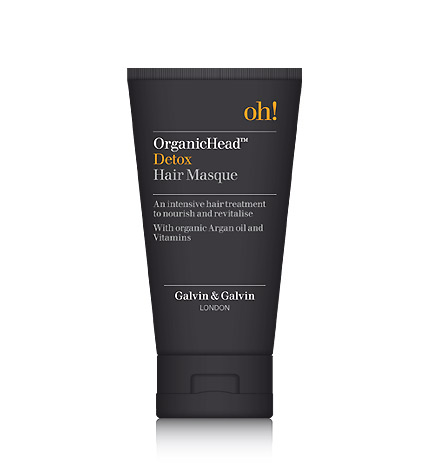 That said as you know I can’t get enough in the volume stakes so I will also be adding the Full Volume Root Lift Spray (£4.00) to me regime which gives hair extra height while Glycerine, organic aloe vera and Ecocert organic orange oil nourishes while organic argan Biogreen strengthens.