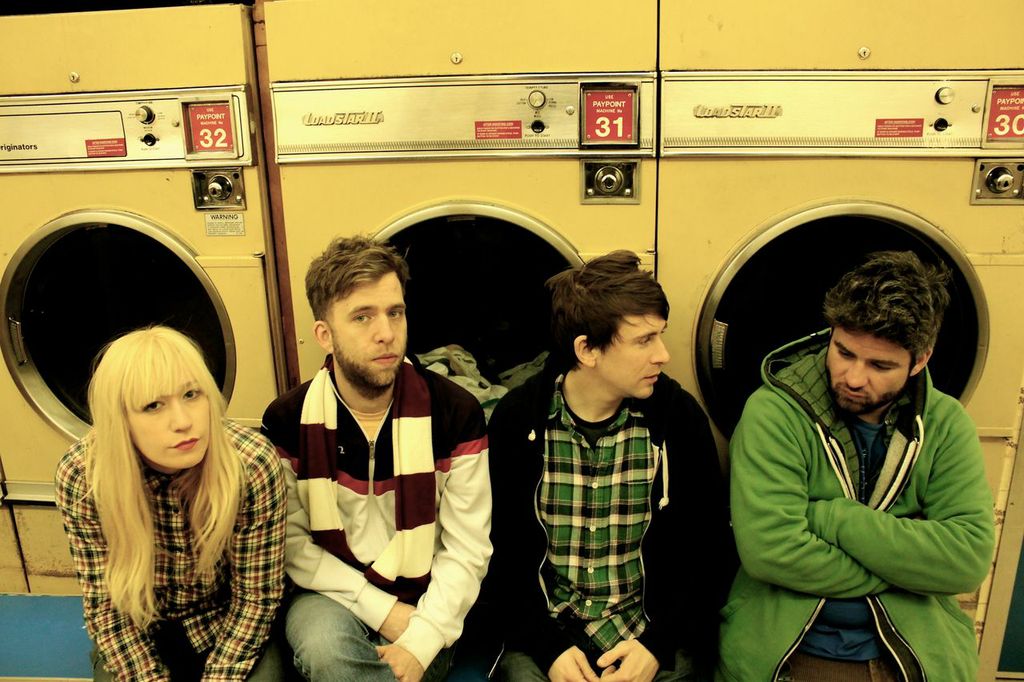 I have been hearing great things about Ligers, formerly known as Liz and The Ligers, so I thought it was about time I caught up with the London foursome. If you are lucky enough to be basking in the Spanish sun at Benicassim this June make sure you add Ligers to your musical schedule.

There is something
charmingly low fi about your visuals – promo pic in a launderette, the
fabric on debut EP, and the video for Goodbye. Is this the aesthetic you
would like continue or do you have big budget special effects etc in
mind for down the line?

Liz: I think visuals
are really important to us, I actually have a degree in illustration and
I do always enjoy deciding how to best capture us visually. Videos are
the best format for this as you can really experiment, we once did a
video which used loads of massive bubbles slowed down which looked
great. I think its good to show where we are at though at the moment and
I’ve never been a massive fan of over produced stuff just for the sake
of it. I think having a creative concept is the most important factor.

I can hear hints of Karen O and Florence in your vocals in terms of the strength, depth and quirks. Who are you vocal heroes?
Liz:
Well Karen O is amazing I’ve seen her live a few times and was blown
away by her whole performance. However I’d say truthfully our influences
probably stem a lot further back than that. I love Patti Smith’s
attitude, Joni Mitchell’s tone is stunning and I also adore PJ Harvey.
However I think I could say I’m just as influenced by Mick Jagger and
Macca as I am female vocalists!

Liz, when did you realize that you had a voice. Were you kid that would do the solo’s in school etc?
Liz:
Truthfully not until very recently and it never used to be as strong,
it somehow developed over the past few years! I have played trumpet from
the age of 5 though and I’m certain that gave me good lung control, but
in mine and Dan’s old band a few years back I just sang backing vocals,
it was never my thing. However, now I love experimenting and seeing
where I can go with it! I feel I can take out a lot of aggression and
passion by singing…

Can you tell me how the writing works in terms of all your contributions, how all your ideas come together etc….
Liz:
Well the band started out with mainly my songs but now we are writing
much more collaboratively with Dan and Jono doing a lot more of the
writing too. Either way we normally start with one idea and then record a
demo. Then we develop it in practice with the rest of the band and that
is where it really starts to take form and become a Ligers tune.

Do you generally have to make a point of organizing writing
sessions, or do you write on the go. Do ideas come to you at inopportune
moments?
Liz:
I think ideas will come at anytime however we normally meet up to then
develop them together! However the melody normally comes first, the
lyrics often happen at the last moment. Dan is the best at lyrics, they
seem to come very quick to him! I have to really sit and think and be
disciplined to write.

Lyrically how
do you find a balance of being honest and talking about the trails of
life but making sure there is still some optimism?

Liz: Well I think we mix
it up from talking about us and things that have happened in our lives,
to that of writing about characters we see or read about. Often if we
have a sadder story to tell, we will match it to a much more upbeat
song! That way it keeps some optimism…

Are you open to discussing and confronting everything in your
lyrics, or are their some personal things you will keep to yourself?
Liz:
I’m definitely open to discussing lyrics, certainly among friends who
can tell what the songs are about! There is something therapeutic about
singing your heart out to a crowd and I don’t think our lyrics are very
obscure so most people will get the gist and hopefully relate.

How have you found doing press so far? Would you say you are the type of band happy to tell all or are you a bit guarded?
Liz:
I think we are pretty much happy to give our opinions! I’ve always
liked bands where you feel you get to really know the members, I think
if people are going to listen to our music it’s the least we can do! Non
of this too cool for school business…

How do you use the constant changes to the music industry to your advantage – use of social media, youtube, instagram etc?
Jono: Just go with it. You’ve just got to do what is expected and people have to be able to find you in the popular forums.

You have some
amazing festivals on your schedule including Benicassim Festival. Who
are you planning to hunt down on the day as music fans?

Jono: Dizzee for me. Its really not my thing at all but so many people said it was amazing at his legendary Glastonbury performance
I wanted to have a little look ever since. Also I HAVE to see Beady
Eye, I’m always up for a laugh! Stars of the show for me though will be
Queens of the Stone Age (not on the same day, however!) My first ever
band used to put them on in the car full whack on the way to our gigs,
I’m in love with them they’re ACE!!!

Describe the scene 5 minutes before you head on that stage…
Jono:
I usually have a massive argument with Liz before gigs. It’s like
clockwork, so much so we really should do it anymore haha! We still
don’t see it coming! It lasts for about 1’30 and then we get our act
together. We’re like brother and sister so any nerves or excitement just
get bounced off each other, then we’re best of mates again. Sometimes
we sing a little song before we go on to get the juices going!

You have started
to get support from some pretty influential people. Who are the people
you have always looked to help guide your musical tastes. Who do you
trust, who has an opinion that you care about?

Daniel: I trust our
good friend Jonny Clayton who’s in the band Something Beginning With L.
We’ve done some recording with him and he is a good judge of sound, and
people.

Bands have to deal with receiving praise as well as criticism. How do you cope with both reactions as a band?
Liz:
Music is totally down to peoples taste, even within the band we like
some stuff that the others don’t. Criticism is fine, it just means we
aren’t that persons bag. As long as the praise is there too we’ll carry
on!

Your music has been described as both Indie, alt pop and
psychedelic, which aren’t necessarily the ‘trendy’ sounds right now. Do
you think this may work to your advantage, are people getting tired of
the current chart onslaught?

Liz: Well we just
play the music we are best at, we don’t want to try and be something
we’re not! We’re in it for the long run, we aint gonna just jump on the
band-wagon of a scene that won’t last. We play music because we enjoy
making it and yeah perhaps it could work in our favour if we stick out a
bit from what is currently being played!

Is there a particular musical era that has dictated the sound of Ligers more than another?
Daniel:
Well, Liz and I used to be in another band years ago. We only had tapes
when we went on the road, so it was a heady mix of Madness,
Television’s Marquee Moon, and the Greatest Hits of Queen. Come and see us play and I’m sure you’ll hear a bit of all those in the pot.

Recently played on your ipod?
Liz: Gosh, erm not on my ipod but in the car I currently have ‘Forever Changes’ by Love – the live version its ace!

Song you wish you’d written?
Daniel:
‘Stay- just a little bit longer’. Pop perfection, the whole song clocks
in under 2 minutes and is like a never-ending chorus.

Describe what Ligers do in one sentence…

Liz: The band or the animals? We make music, I’m pretty sure the animals just practice their magic.

Who would you love to star in one of your videos?

Daniel: Dave, without Chas. I saw him at a gig the other day and he was a top gent. That’s him playing the bass on Eminem’s My Name Is

Daniel: Chas, without Dave. That’s him singing with Heads Hands and Feet http://www.youtube.com/watch?v=1aIft448lBA

twitter.com/LigersMusic
facebook.com/ligersmusic
Keep your eyes peeled for their next video ‘Break You’ which is one half of the double A side single alongside ‘Goodbye’ out May 27th