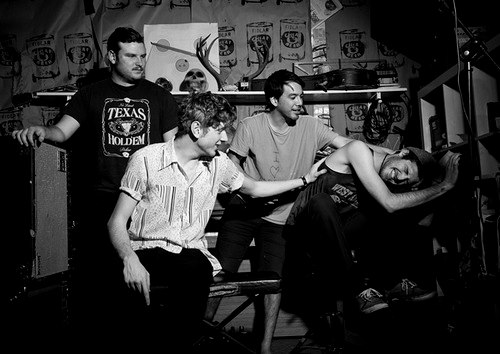 Describe an average day for Fidlar….

Wake up together as a band (in the same bed), do an hour of yoga/breathing exercises/meditation as a band, then we all do our respective household chores (tending the livestock, smoking the meats, pickling the vegetables, etc.), then we dine.

With how well things are going do you still have time for surfing, skating and having the ‘life’ moments that have helped to make the lyrics of your songs so colourful?

Our life moments are now made on tour, since we haven’t been home in 94375 years.

You produce your music yourselves. Would you say you guys like control in general?

We collectively are one almighty, uber-controlling tyrant of our creative process.

Is there a producer you would want to work with? How do you think you’d cope with relinquishing control?

An interested producer would have to perform a number of tests trying their mental and physical agility, if said producer completed these tasks, we would begin the conversation.

Do you think you’d lose your charm as a band if you suddenly had a team of people dictating what you should be doing and how?

You have spoken about squatting, sleeping in cars etc. If this band should gift you with great wealth how would you choose to live?

In our cars but in a really fucking nice parking lot.

You choose to use personal stories for your lyrics. Is there anything you hold back, is there a sealing point when it comes to how much you will tell?

We pretty much just say it how it is.

You have said that ‘you never saw it coming’ in regards to so many people liking what you do.  Is this because you don’t realize how good you are or don’t like to read reviews, tweets etc about you?

It’s because we didn’t set out to have people like what we do, we just wanted to make music and play it.

You have said that you’d like Nicholas Cage to be your hype man… any progress? Who would you most like to watch you from side of stage?

We’ve been in contact with his people, but his asking price is a bit high. Henry Rollins with Bill Murray on his shoulders.

I read that one of you was molested and robbed by an unsolicited prostitute in Memphis, Tennessee. What do you expect/hope from your time playing the UK?

To NOT be molested and robbed by an unsolicited prostitute.

Love the new video for Cocaine. Who had the ingenious idea and how did you get Nick Offerman involved?

Nick’s an old family friend of Max and Elvis and Nick listened to the band and then came up with the initial idea for the video. The treatment he wrote for the video is probably the funniest email I’ve ever read.

A lot of things you say and do is quite racy. How do you family react to your frank talk about drugs, partying etc?

My folks aren’t too into it, but they love me anyways.

You are playing one of the worlds most famous festivals. What have people told you about Reading and Leeds?

We actually played it last year and it was one our first big festival shows, it was amazing! We’re very excited to be able to play it again.

What have/will you request in your rider?

Who will you try and stalk over the weekend?

Any special treats for the audience for R and L?

Well it wouldn’t be very special if everyone knows about it.

Tell me something you’ve not told another interviewer….