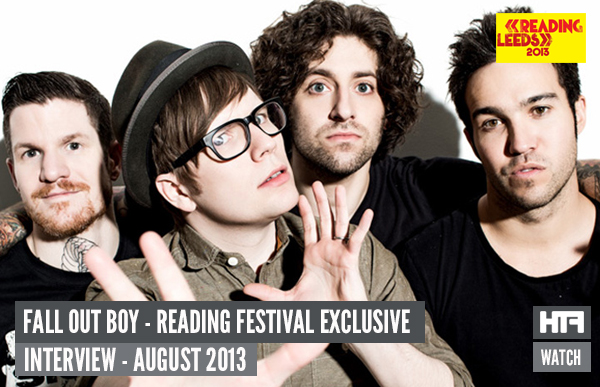 The news that Fall Out Boy were returning was almost enough to encourage a party at Hit The Floor HQ – but as ‘professionals’ we have to try and stifle such bias. But we scrapped that mentality when we heard they were returning to the Reading and Leeds main stage for the first time since 2009, and allowed ourselves to get thoroughly excited.

Whenever a much loved band returns from a hiatus with a new album they are always running the risk of tainting their previous legacy…so there was much relief when the boys revealed then splendid ‘Save Rock and Roll” and proved they still had that pretty special genre bending formula. When it was their time in the Reading press room the small space suddenly became the busiest place on site, and whole bunch of new ‘press’ people seemed to emerge. Amongst the chaos Sophie Eggleton managed to catch a few words with Pete Wentz and a few less with Andy Hurley about the new album, Reading festival and what they may do next….