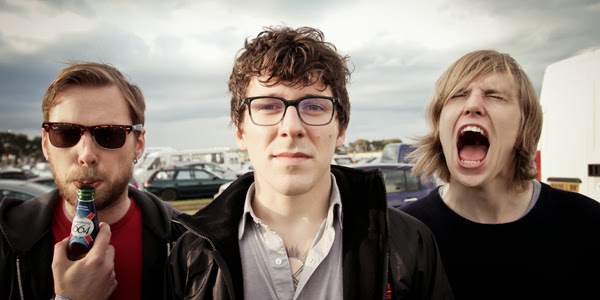 I have to ask about THAT Cold Crows Dead article (GUARDIAN). Honestly what was
your initial reaction when reading it?

I guess I was somewhat shocked. For a journalist that is held in such
high regard by the music industry I thought it was a pretty lazy piece
of writing in all honesty. The fact of the matter is Paul Lester would
not like my band so I wasn’t even that fussed as to whether or not he
had listened to us. The thing that bothered me the most was that he
didn’t write about Cold Crows Dead as a collective effort, he divided
the group in half and judged our work by how he perceived the record
to be written. He ignorantly dismissed the fact that everything he
likes about the record, I worked on, and everything he didn’t like
about the record, Paul worked on. For some unbeknown reason he
targeted me due to the fact I’m in a rock band or at least that’s how I perceived it.

What would you say to the journalist if you were face to face?

Do you need a hand getting down from your high horse?


Speaking of other musical projects outside of the Xcerts. You have been
best friends for years but is it ever awkward when someone broaches
embarking on alternative work?

This is actually the first time one of us has branched out. Jordan and
Tom are very close with Paul so it didn’t feel awkward. The Cold Crows
Dead record was created and worked on when we (The XCERTS) weren’t
touring so the two worlds never collided. The boys are in the live
band and I wouldn’t want any other rhythm section in all honesty.
We’re a tight knit group and we’re all creative so everyone
understands.


Unlike the aforementioned article, I’d rather concentrate on the
positives of touring with huge acts like Biffy Clyro. What was the
most valuable thing you gained from these high profile slots?

No matter how big you get, always remember to stay passionate about
your craft. Every band we have toured with who we admire take great
pride in their work. We’ve played with bands that don’t really give a
shit about anything other than what’s happening on Twitter and if
anyone of any ‘importance’ is on the guest list . We aspire to be the
best band we can be and write the best songs we can and witnessing
other bands who have been together for years still feel and act that
way is incredibly inspiring.


How did you cope with the intense experience of SXSW. Would you do it again?

We would love to play again. We had a great time at SXSW and I think
we coped pretty well considering it was our first time playing there.
The festival itself is kind of indescribable, hectic and stressful are
words that come to mind but it’s definitely a trip and a lot of fun.
The heat was actually the hardest thing for us to deal with!! Pathetic I know but we are pasty Scottish dudes that don’t often see sunlight.


You’ve always been one of those bands that other bands call
underrated. You seem to get great reviews and are admired by many of
your peers. What are your goals and what do you think are the main
factors in terms of progress and growth?

Our goals and aspirations have always been the same, but only now are
we being a bit more vocal about it all. We want to be a very big band.
We have never said otherwise, we have just kept quiet and worked hard.
We want to be known for releasing great music and not how arrogant we
can portray ourselves in the press. Progress and growth to us means
keeping things interesting in terms of creativity and pleasing
ourselves first and foremost. I don’t want to sing one line I don’t
believe in. I’m glad people are starting to see through the bullshit
in rock music. For too long bands and musicians have treated their
following with little respect by releasing drivel they think will sell
or make some play list on radio. As long as we respect ourselves and
our audience we will always have that connection and in turn will grow
together and naturally. We just want to better ourselves as musicians
and songwriters. That’s it.


Some so called ‘alternative’ bands have broken through recently,
scoring top ten albums and day time Radio 1 airplay. What do you think
seems to be the winning formula right now for guitar bands?

I’m not too up to date with charts and whatnot, but if you are talking
about who I think you’re talking about then i genuinely believe it’s
all down to a loyal following. The ‘old fashioned’ way of doing things
is alive and well, it just takes time. These bands have played in all
the small venues this country has to offer and made personal
connections with the people that attended the shows. Once you have
made that connection the following becomes a bit more passionate about
what you do and then word of mouth starts to spread and before you
know it you have a core following which is crucial if you want
longevity.


You were playing new album material to audiences even way back in
February. Did the reaction drastically change any of the new songs?
Were you surprised about the ones that worked best?

We have only played 4 new songs in total to audiences and some have
changed quite a bit. You learn an awful lot about a song when playing
to a room full of strangers, not in terms of reactions but because you
notice little bits that can be improved by playing it night after
night. Every night on stage performing new songs is schooling for us.


How much have you factored in how enjoyable the songs are to play live?

We haven’t actually given that much thought in all honesty. We are
just trying to write great songs and we’ll worry about playing them
live later. Famous last words!


In an old interview you have said you want the new album to sound
classic with a modern twist? How have you got on with that?

It’s been really interesting. This is the first time we have
conceptualised a sound and it’s been really great for us to write
songs with such a specific sound in mind. We are definitely nodding to
the past in terms of influences but we want to keep things interesting
with a variety of different sounds layered within each song.
Experimenting in the studio is a necessity for our band.


You’ve mentioned that you have been enjoy Fleetwood Mac, Tom Petty,
The Pixies – but have any more recent acts had an influence on what
you’ve created in your latest work?

Bright Eyes have always been a huge influence on me but perhaps the
influence is starting to show a bit more. By that I mean the more
aggressive pop style you sometimes hear with Bright Eyes. They aren’t
even recent!! I’m struggling. Actually, we love a band called Colour
Revolt and in terms of sweet tones they have really inspired us whilst
writing this record. Brand New and Manchester Orchestra still remain
big influences but in all honesty the majority of our influences are
older acts.


Murray, you described Scatterbrain as ‘the sweet sound of a young man
losing his mind’. How do you think you could sum up this next album?

A dream like rock record about fixations with love, lust, death and
anxieties. Scrap that! We just want to make pop music cool and loud
again.


Although the final result never seems hindered by lack of members. In
fact most three piece act I know at make a huge noise. How hard is it
when trying to progress a song when writing? Do you have to be able to
imagine all the elements that you would eventually want on the song?

Usually when writing a song I can hear all the other instrumentation
in my head. We try and make the songs sound as good as possible as a 3
piece in our rehearsal space but we are all well aware there will be
overdubs as well as a number of different sounds used on the finished
piece. Other times it’s just a case of experimenting when in the
studio to suss out what’s working and what’s not, trial and error I
guess. I’ve always been told and stuck by the rule that if you can
play a full band song acoustically and still make it sound great then
you have succeeded in writing a good song.

In terms of ease of writing how does this compare to previous efforts?

The writing process has been really easy and relaxed as we’ve given
ourselves plenty of time to live with the songs this time round. This
is definitely the most prolific we have ever been. I didn’t experience
the dreaded writers block which i have done in the past and i’ve been
writing pretty much non stop for the past year.


Have you got anything special prepared for your performance at
Relentless Live – production, covers, guests etc…?

We may very well have a lighting guy who will hopefully make us look
incredibly pro but apart from that it’ll be a straight up good time.


Most recently played on your Ipod?

The self titled Delta Spirit record.


Music matters to me because….

I’d love for us to work with David Lynch in some sort of capacity. I’d
want him to direct The XCERTS movie that will one day happen.


Any unusual past times outside of the band?

Jordan takes life drawing classes….that’s not even unusual is it?
Different I guess.

Either the Music Hall in Aberdeen or the Barrowlands in Glasgow.


Dream music video if money was no object?

Something that looks exactly like one of the early Weezer music videos.

Release a record that allows us to tour the world.