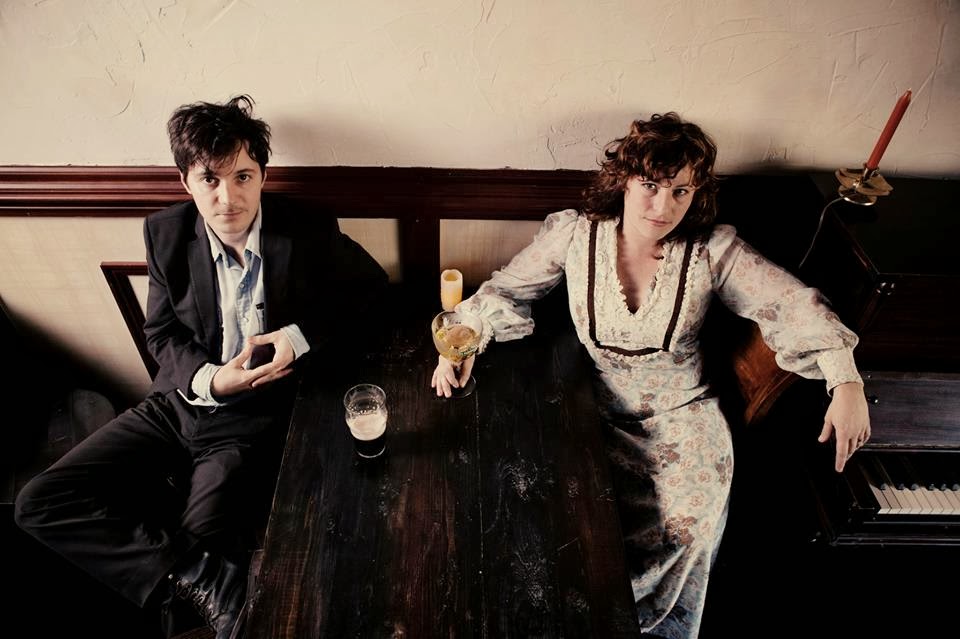 You
were in the UK earlier in the year. What did you learn then that you
are going to build on during this trip?

The most important thing we learned is to Look
Left. We haven’t been able to get out and about too much but we have
become quite familiar with the Islington area. We’ve had beers at Filthy
McNasties and tried to catch shows at the Lexington,
but it’s been sold out both times. Also, the curry in London is pretty
amazing.

Are there any UK artists that inform what you do musically?

Besides loving Beatles and the Kinks, Elvis
Costello has actually been a major influence on us, both musically and
as a career study. He does what ever he wants.

We
all build an idea (from interviews, records, word of mouth) of what
someone will be like. How did Jack White, the reality, compare to what
you had imagined of him?

He was charming, efficient, sensitive, gracious and
generous. We tried not to have any expectations bc that’s a dangerous
row to hoe. He embraced us both with a sincere hug and we went straight
to work. That’s our style anyway.

You
have toured with the Felice Brothers, Justin Townes Earle and supported
the Dave Matthews Band. What did you learn From each of them, and do
you prefer to perform
alongside artists where there is an obvious link in terms of sound?

Felice brothers: you can be the best songwriter in
the world and people will try and shit on your art, so you can not
concern yourself with critics.

We don’t have to share an obvious link with the
bands we play. For us it’s more about playing with people who inspire us
and we have been extremely lucky to get to tour with Felice Bro.s, JT
Earle, Lucero, Dawes, Butch Walker and especially
Hayes Carll ( our Texan mentor in music/business/family life).

You
have said that this whole thing was a bit of an accident. Do you ever
imagine what you may be doing if you hadn’t paired up?

We don’t speculate about it much bc we would both
be in the action one way or another. You can’t stop a dog from pissing
on a tree. We’re so happy to be out here together. We don’t take it for
granted, as tour life tends to be lonesome,
even in a group.

If
you are having a writing/working day, do you have an agreement that you
don’t bring any marriage arguments or issues with you during that
period of time? Is it possible
to separate your work life from your normal life?

In a sense there is no separation, because it’s all
our life and it can’t be compartmentalized easily.  we don’t say for
example “you didn’t take the trash out AND that chorus is shit. ”

Artists
often write lyrics about relationships, family, personal experience.
Does this ever prove to be awkward when you are in a band with your
partner?

We have yet to write passive-aggressively about
each other in songs. On that note, there’s a really intense song called
“it hurts me” by Julie Miller. Buddy Miller (Julie’s husband) and Jim
Lauderdale perform it regularly and Buddy always
predicates it, saying “I hope it’s not about me” . It’s probably about
him, at least sometimes.

In
terms of performing live you have said you are always teetering on the
edge of disaster. Have you had any moments that have gone beyond
teetering while on stage? How
fast do you recover from such mishaps?

Yes. There was a particularly disastrous moment at
Voodoo fest in Nola where we destroyed, in a bad way, Bruce Springsteens
Jonny 99. It was a public humiliation that lasted 20 seconds and then
it was over and behind us. Failure is humbling.
Luckily, it’s also humanizing and no one kicked us out of New Orleans
for having a shitty moment in a show.

We have to put failures and victories immediately behind us and move forward. We exist in the moment, always.

That’s a complicated answer… Mentally drained,
physically compromised, diet found wanton of nutrition, sleep
unregulated, isolated from family, lost in space and time AND YET…
Adventure of a life time. Our music, which we made for ourselves,
has been sent out into the world and People are making it their own and
using it in their own way, relating to it in a way we didn’t consider
when we created it. It has a life of its own in that way… We are
family… Michael, Cary Ann, Townes the dog, And
our amazing crew Joel and Kevin (and Blakeyman in Europe of course) and
move around like a tribe of gypsies, getting it done. It can be
romantic and mundane both…. Such is life.

As
your audience has grown does it make you less likely to experiment and
try new genres, knowing that you have lots of fans to satisfy?

Our fans don’t need us pandering to their likes.
They like what they like. We like what we like. Sometimes we like the
same thing.  We feel zero pressure about our creative process, and from
business standpoint, there is no giant label
pointing a gun at our career saying ” the radio wants this that or the
other…” and since we haven’t sold millions of records we can operate
well with even a modicum of commercial success.  We don’t need a bunch
of fancy shit to make us happy.

How have you adapted to having more people being involved in your band decisions? Are you okay with relinquishing control?

No one tells us what to do.

You
say that your new work is generally informed by what instruments are
around at the time. Do you learn new instruments quickly? What has been
the trickiest to master?

There’s a saying some of our farmer friends use:
“Jack of all trades, master of none”.  We subscribe to that notion when
learning new instruments.  It’s good to know a little bit about a lot.
We’ve taken up accordion and that’s really
satisfying. It’s enchanting to take up a new instrument… It’s like
child’s play. We’re lucky not to be expected to be virtuosos.

Michael,
you produced O’ Be Joyful. Were you accepting of Cary Ann’s comments if
she had a differing opinion about any of your production decisions?

You
have recorded in your van, in motels, in your backyard. Do you think
you would ever be able to produce an album you were happy with in one
high tech and slick recording
studio?

Probably..  I just don’t really care to make
records that way.  A lot of the best creative decisions come from being
forced to work with what’s around you.

How do find that balance between not being too polished and not being overly low fi?

What is your opinion on the current state of the music industry. If you had the power, what would you change?

We have no opinion about it. We have good people
around us and we will keep the shitheads away from us for the duration.
Seems like a good time to be a working class musician, seems like a
tough time to try and be a pop star. You have to
tour. In the words of Britney Spears, “you gotta work bitch”.

We played the Ryman in nashville.