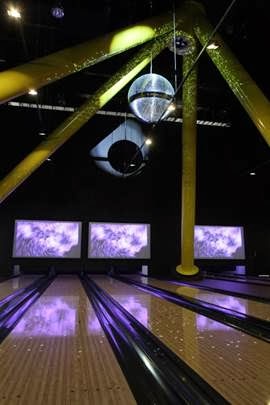 Brooklyn Bowl and AEG Europe, the owner of The O2, have joined forces to bring the Brooklyn based entertainment venue to London on January 17th 2014. Featuring 12 lanes of bowling, three of which are VIP, a 120 cover restaurant – catered by the famous New York based Blue Ribbon Restaurants Group – and a 500 capacity music area, it is set to be one of London’s hottest venues of 2014. Yesterday saw the venue’s show-stopping 6 foot wide disco ball fully installed above the lane area, meaning London’s biggest disco ball is in the capital!

Brooklyn Bowl is the ultimate night out, with its ground-breaking integration of premiere music, bowling, locally crafted beers, and food by the acclaimed Blue Ribbon restaurant group. “One of the most incredible places on earth,” according to Rolling Stone, Brooklyn Bowl offers guests a unique place to relax, eat, drink and watch a performance. The original Brooklyn Bowl is located in the former Hecla Iron Works (built 1882) in Williamsburg and was the first L.E.E.D. certified bowling alley in the world.

A new one-stop destination and entertainment venue like no other, Brooklyn Bowl is set to rock the socks out of London.