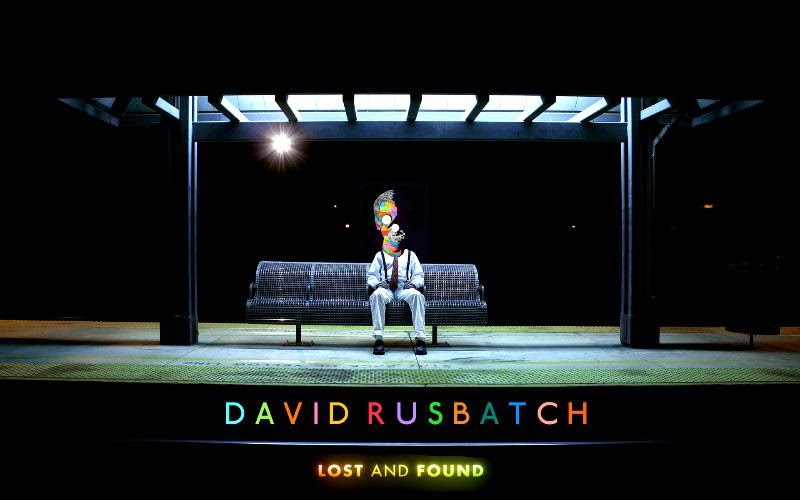 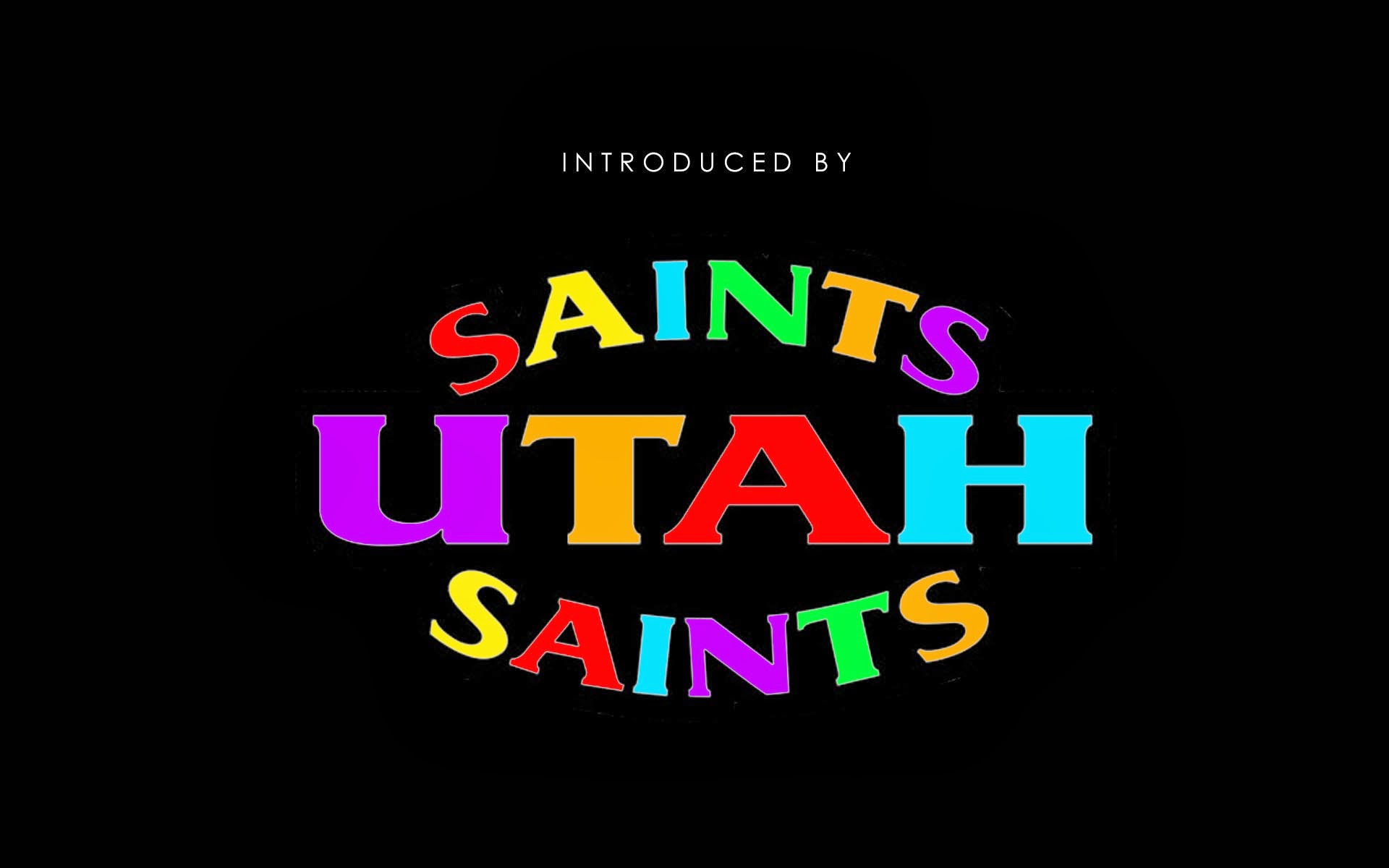 First things first. What conversation/meeting/thought lead to this project?

OK, well I’d just finished a previous exhibition, and was starting to sketch out new idea’s. At this time I become good friends with the DJ Emma Borley, (previously DJ’d alongside Two Bears (hot chip) and Leeds based outfits AudioJack and FreakyBehaviour). Listening to her talk dramatically about dance music, I deduced it practically defined who she was, akin to a religious dervish talking about their gods and their all encompassing impact on their life. It made her like make sense like nothing else. This was mind-blowing to witness, and led to a exploration further into the sub culture.

Is this scene, genre of music, something you were already familiar with?

Yeah, as a MixMag subscriber years before, I was fairly familiar with Dance music. It wasn’t an obvious choice of subject, as the media portrayal had always suggested a vacuous art form that needed drugs to attribute any substance to it. This has always seemed unfair to me, and I wanted to challenge that notion. From a visual perspective, compared to other genre’s of music, it still seems to have a confused vague visual identity, the excitement centred on defining this further.

Do you prefer to know and be passionate about the themes you are painting about, or do you enjoy the challenge of having to research and familiarise yourself with something new?

My teenage years comprised of swimming through my own vomit 8 times a week at swimming training, so my formative years were restricted more than most, so I always wondered what i’d missed out on. So I didn’t and don’t claim to be an authority on the subject. So it was a foreboding undertaking, almost a regression back to the mid-90’s for me. A period of re-education ensued.


Are you someone that likes to paint with music on in the background? Does it influence the style you paint and the may you manipulate your material?

YES. My dog ate hotdogs for 2 weeks whilst I paid off a quality sound system. I do think the music informs the work massively, though its hard to know whether its the relaxed state it puts me in, the blinkering of senses or subconsciously filters into the work. Trance music and chill-out artists like Bonobo and Fink seems to work best for me. 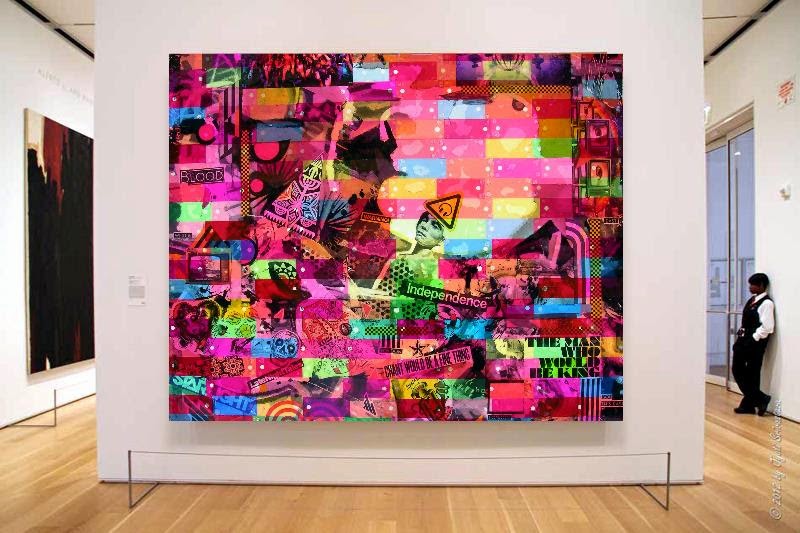 How involved were UTAH SAINTS in the project? What was their role exactly?

Well, it was an honour to have them involved, their role was to conceive my life long love of electronic music. They were the early pioneers of sample led music, I remember vividly being in a sport shop , and their seminal Kate Bush sampled “something good” came on, and we had an impromptu party in the corner of the shop, oblivious to the scowling shop assistant. Being from Leeds, we were all proud to have them flying the flag alongside KLF, SNAP, SHAMAN etc etc. We have mutual friends, and they liked the paintings  – and kindly wrote an introduction to the exhibition.

QUOTE:
David has done an amazing job of visually interpreting the sonic palettes of electronic dance music.He has produced stunning contemporary pieces which have so much depth they are also able to reference the journey of dance music over the last 20 years.”  UTAH SAINTS 2014

“Liking these paintings a LOT!. Rusbatch is like a visual mash-up put through a TB-303’ Norman Cook/FATBOY SLIM 2014

What were the surprising things you learnt about the scene during your time working on this project? How has it changed you relationship with the music?

The biggest apparition for me was realising how seminal dance music has been not just to hardened clubbers but to EVERYONE.. Going to a night club, getting drunk, dancing till 3 am, has become a standard coming of age ritual, which is either dismissed as time goes by or something that stays with you, each track keeping alive the feelings of YOUTH and REBELLION  flooded with nostalgia. 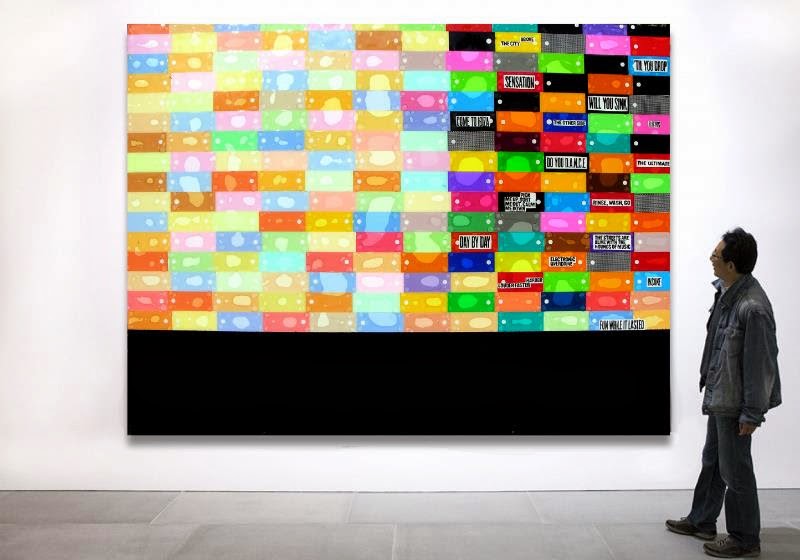 Can you tell me about the research you did for this body of work?

Yeah various sources. Sarah Thornton’s excellent social essays “Club Cultures – Music, media and subcultural capital” was very informative, and influential. Talking to hardened clubbers, about getting naked and lost in fields in the middle of West Yorkshire, seeing golden pyramids and spiders whilst dancing at Full Moon parties in Thailand, tales of care free abandonment against the stark reality of a grey 9 to 5 job.

Are you someone that has done a lot of Clubbing in their time. What did you get out of those experiences?

One of the best moments of my life was being passed a dirty bottle of poppers by a random stranger under a huge tent in the Hampshire countryside with mates, whilst The Chemical Brothers fired up their set. I’m not a religious man, but it felt cohesively perfect and blissful. Happiness has been defined historically as “absence of anxiety” – and the sea of humans swaying around me like one sweaty combobulated (sic) body seemed to confirm this.

How important are other art forms in terms of influencing the work you do?

I think all art forms are very interchangeable, at the heart is CREATION. All forms of CREATIVITY have the potential to influence and life-affirm. I did take a spare ticket to the ballet recently and I really tried to get it, but I struggled.

These works seem to be the most vivid work you’ve done in terms of palette. Were you comfortable with this, or was it difficult to adapt to initially?

Very true. Although the palette changed, the beginnings of the paintings all go through the same process. Though it’s hard to see, it’s been a natural  and comfortable progression from previous work. After throwing previous work in a skip pre -exhibition, my gallery were understandably on edge, at the new work, and like new things needed time to get familiar with them as all new things do. 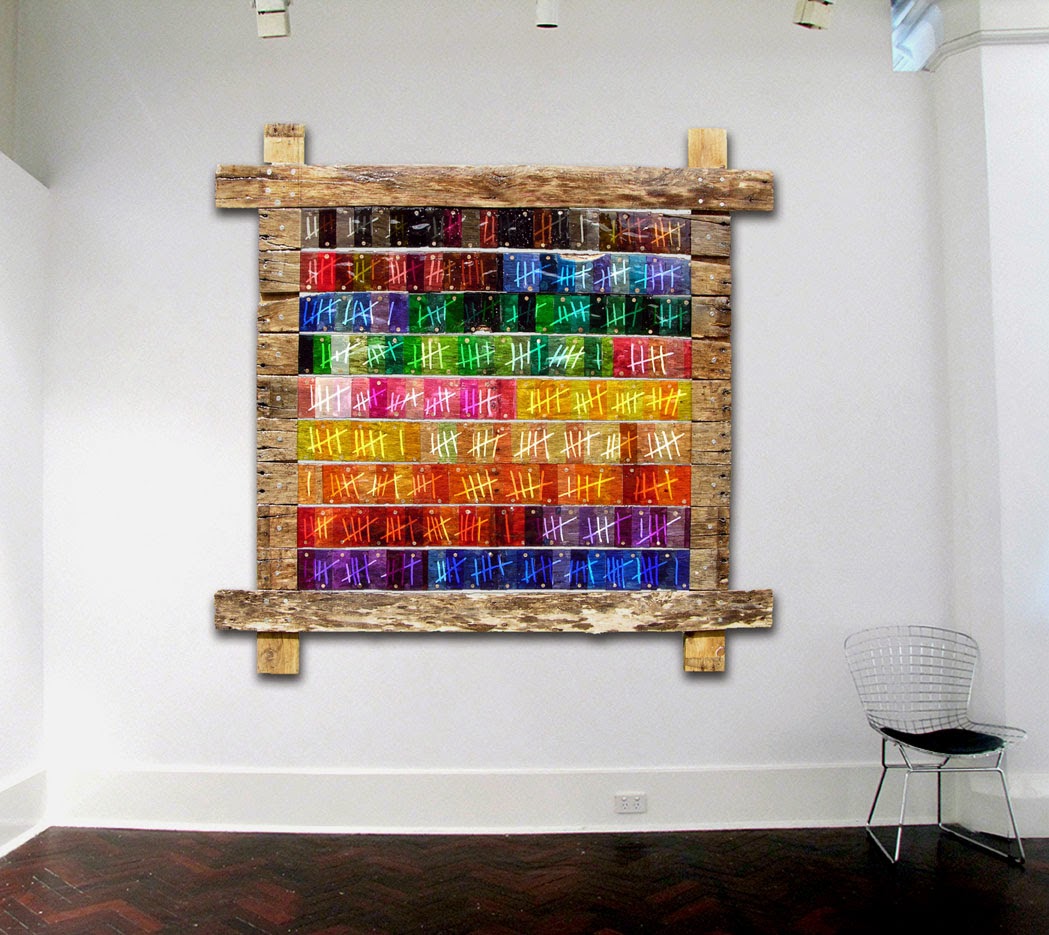 Is there anything about the process behind these works which is unique to this project?

You wouldn’t ask Paul Daniels how he does he trick would you?…Oh…you would…ok…..erm…I guess the materials are unconventional, which has changed the thinking process, almost a re training of the brain. Some artists deal with one subject their whole life, but my restless brain needs new stimulation.

I can imagine these will be extremely popular to private collectors and those looking to jazz up their homes. How has the response been so far?

The response has been surprisingly bonkers actually! People seems to really understand and like the work, and we’ve already sold quite a few paintings pre-exhibition too. The cliche is paintings look much better in the flesh, and these seem to provoke a really positive instinctual guttural response.

Is there ever an element of sadness when you see your artwork go to their new homes?

Yeah, definitely. There are some paintings that I hate to let go, my heart is constantly broken..  You have a short lived intense relationship with each painting….. 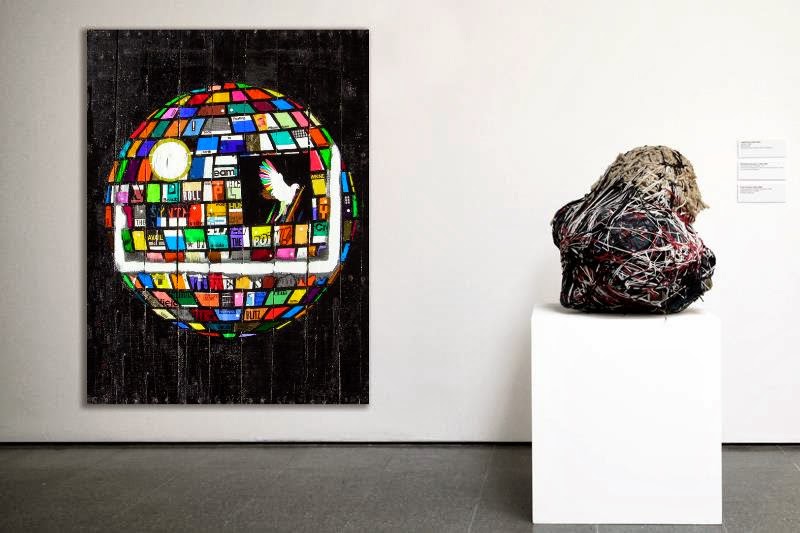 How have you orchestrated the opening night shindig to befit the theme of the exhibition?

At the opening night, we have FREE DRINKS, and Utah Saint’s introduction in the catalogue and displayed. Also an exclusive  playlist of tracks that influenced the work as well as a special mix recorded and mastered especially for the occasion by DJ Emma Borley – the mix that started the whole adventure. COME ALONG..WHATS NOT LIKE?!!!

How do you cope with opening nights. Are you comfortable in schmoozing with attendees etc?

Yeah, great, it is an essential part of the art industry. Everyone has a commonality in the love of art, which is great.

How do you feel about dissecting your work and the themes and meanings behind the painting?

When I was starting out as an artist, I remembered a Stereophonics album, the sleeve artwork, detailed the provenance and meanings behind each track. But this was seem as a negative when applied to visual art, as people like to project their own meaning to a painting. Also, given everyone has a blank canvas at their disposal, sometimes its nice to remain ignorant as why a painting has been conceived, and that there – is the addiction of painting – that subconscious glint of meaning thats never explained. 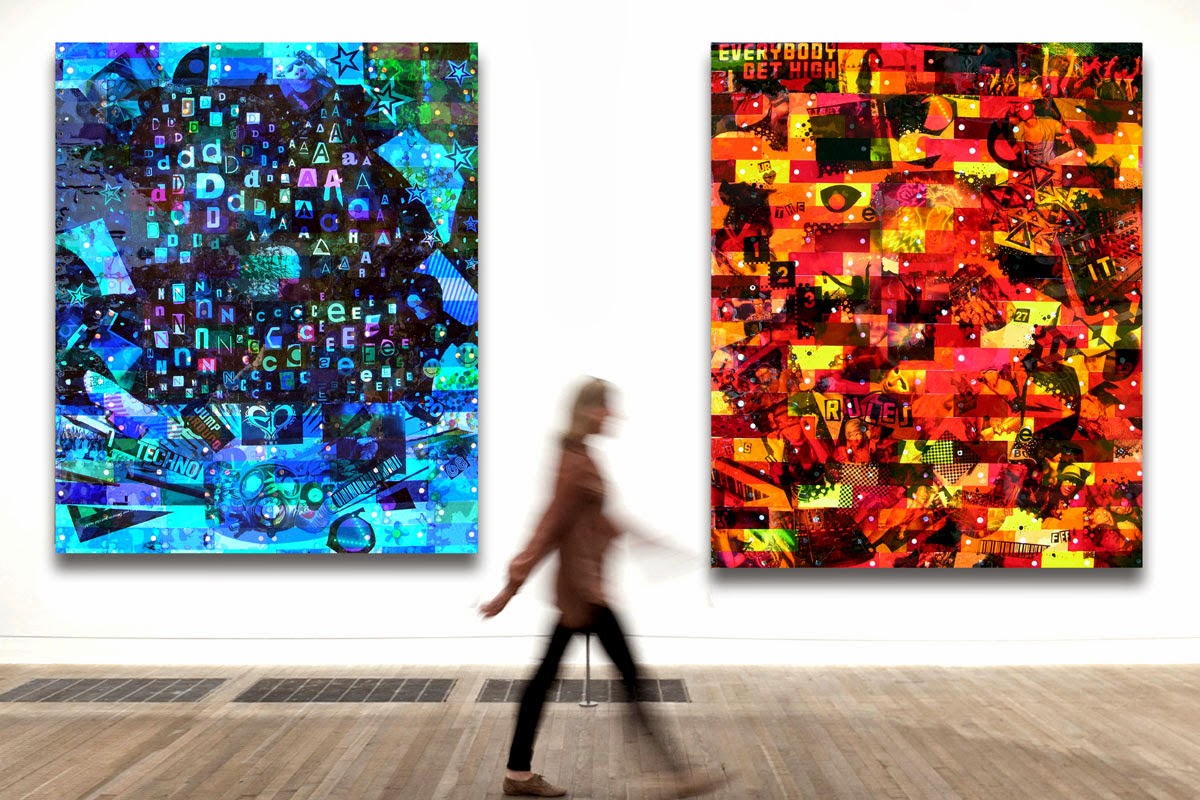 You’ve previously work with Howard Marks on some work. How do you cope with collaboration in general. Are you accepting of outside opinion and ideas?

Howard was very generous and accommodating, he was a fan of my work so no real stipulations were put on the work and I was left to my own devices. Only the confines of the subject matters can prove frustrating sometimes. Collaborations and discussion can be healthy, but, the freedom of painting lies in doing what you want to do, unrestricted.

A productive collaboration recently was with Film maker Andrew Barnes, who did a short film about my work CREATE &DESTROY:

Your work can also be purchased in the form of t-shirts from Harvey Nichols. How do you feel in general about your work being transformed into sellable items other than their original forms?

Erm. Great question. I’ve not seen the finished clothing yet, so hard to answer, will take a bit of getting used to, my paintings are one of a kind, the only ones in the world at what they are, so the exclusivity informs a intimate value to them. When on clothing they’ll suddenly become more of a commodity. Like a girl friend who leaves you to sleep with the rugby team.

Any plans to bring the show to London?

YES. In discussions about showing the work with a new Covent Garden based gallery later this year. Watch this space for more details or www.davidrusbatch.com

Would you consider another project capturing another music scene?

I don’t know. The appeal with dance music was the unexplored visual realms. Most other music forms are established, well versed imagery, but who knows what the future holds.

Last song played on your iPod?

Oooh…probably one of the tracks from the Lost and found play list….: