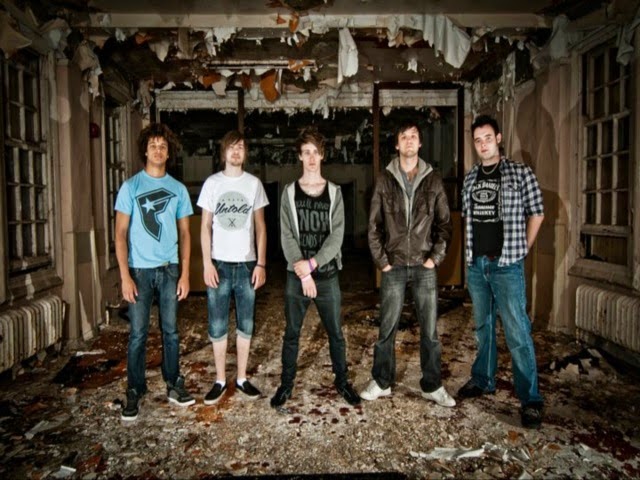 We met online through a music website which people go on to specifically look for like minded people who want to get a band together. Basically a dating website for musicians. Rob found me, and after a few line up changes, Frank, Alf and Dan jumped on board to complete the line up as we are now.

To write music that’s personal to us, to play live shows and to have as much as fun as possible along the way!

Ooooh. Tough one. At this moment in time, I’d have to say Lil’ Jon! Or Nirvana.

DOWNLOAD, Donington Park! Not just because of the competition we’re in either. It’s THE stage to play and has been host to so many of the bands we look up to and are inspired by.

Smells Like Teen Spirit by Nirvana. I always remember being about 10 years old at a kind of 6th form party at my cousins, and some dude had Smells Like Teen Spirit as his ‘ringtone’ on his Nokia 3210. I’d head it about a week before on TV or radio or something, and I was just instantly hooked. I got a guitar for my next birthday purely to learn that iconic riff!

At the moment it’s a line from Mr Red Eye by Feed The Rhino:

“So pull up your skirt, the girl at the back, I’m the man at the front with the red eye
Sorry man, was that your girl? You should have said”

From the title track of our EP ‘Pages’:

They’re just ghosts of the past haunting our future.

I think we’ve all agreed that a tour with Mallory Knox would be incredible. They are the best and hardest working British band around at the moment. Such talented, genuinely nice guys as well. Aiming slightly higher, a tour with Taking Back Sunday or Funeral For a Friend would be amazing! Both are massive influences of ours.

Like Lindt Lindor chocolate balls; hard around the edges but soft in the middle.

An interesting fact about each member…

– Alf gets told he looks like Arg from The Only Way Is Essex quite a lot.
– Franks full name is Frank Zaphod Muir.
– Rob literally has a black carpet on his chest. The hairiest person I know.
– Dan likes to dress up as a woman when he gets a bit tipsy.
– Not a lot of people know that I have a tattoo of a Heartagram on the inside of my lip.

– All get our logo tattooed on us. No joke! I’ll be getting mine on my ankle.