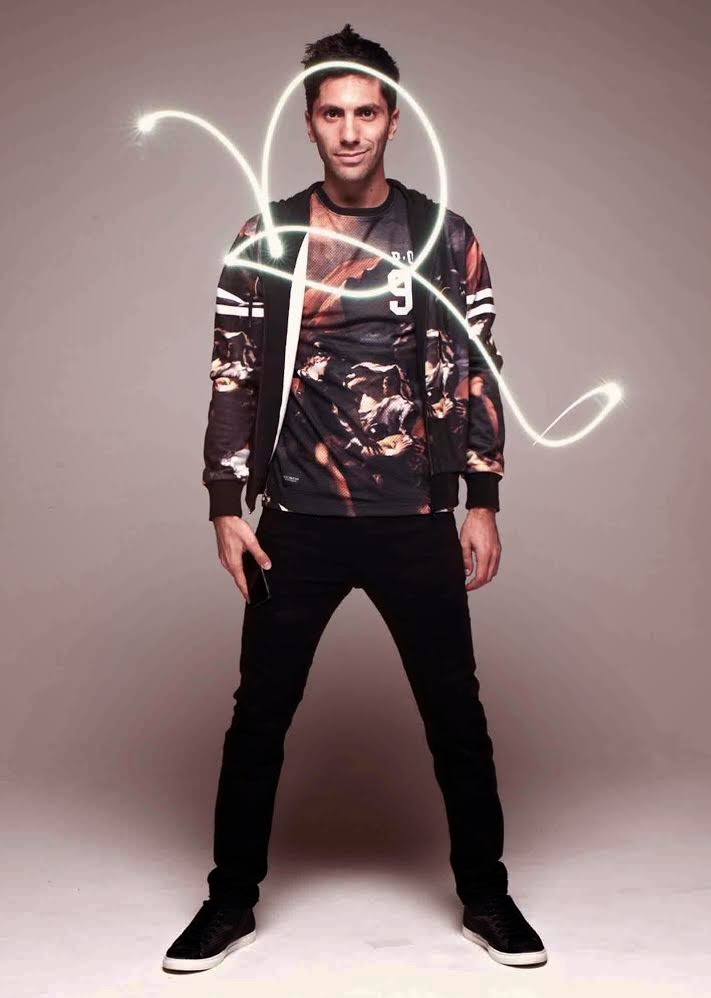 Have you had the opportunity to meet Jay – Z yet. Please tell all if you have!

So…I haven’t met Jay-Z yet but I like to think that i’ve quietly
slipped into his subconscious and perhaps some day our paths will
cross.

Rocawear as a brand is rooted in music. Can you tell me about your musical tastes?

It’s actually kind of funny cause I grew up a preppy uptown kid in NYC
and was mostly listening to whatever my parents were listening to.
Mostly classic rock (Billy Joel, Sir Elton John, Rod Stewart) a lot of
Folk music from the 60s/70s, of course the beatles, and I always loved
classical music. It wasn’t until college that I started listing to more
R&B and Hip Hop.

Did you always think of yourself as a stylish, fashion conscious person?

Not
really…but my brother was and he would always give me his cool stuff
when he was done with it. I’m still working on defining my style, but
mostly I just try to look nice. I have had some periods in my life where
I got a little crazy and tried some bolder looks…like when my mom
sent me to school in 4th grade in overalls and cowboy boots.

How comfortable did you feel modelling? Have you found your signature pose?

Modeling
is and will likely always be strange for me. Even though I’m
comfortable in front of cameras, I still think its strange and a bit
funny to have somebody suggest a pose or expression. I’m only real good
at being me.

Who are your personal style icons?

Is Max hoping to get his own campaign soon?

HA! I keep waiting for the Mens Hair Club to offer him his own “Silver Fox” line.

Does
it feel like the awareness that Catfish has brought to dating and
social media has reduced the amount of ‘catfishing’ or is it still a
ever growing problem?

It’s
definitely helped. I get emails/tweets all the time from people telling
me they’ve used the skills they learned watching the show to reveal the
true identity of someone online.

Have people tried to catfish you since your original experience in the movie?

Not really sure. I don’t engage with strangers online anymore.

How has the TV series affected your relationship with Max. Do you need a break from each other when filming stops?

Max
has become my best friend over the past 3 years…but when we aren’t
filming the show we are rarely together. People always ask, “where’s
your partner Max?” like we should always be together. As they say,
distance makes the heart grow stronger.

What
sort of punishment do you think people that create such huge make
believe worlds should get? Should there be something in place to put
people off?

Honestly, I think the time they waste and the guilt they feel is punishment enough.

Aside
from people merely getting sucked in and carried away with the
deception, it feels like some enjoy the thrill and excitement that comes
with their new identity/life/world. Have you and Max found yourself
trying to come up with solutions to encourage people to find their
excitement elsewhere….How can we encourage change?

It’s really tough. Not everyone has the opportunities and access to the
events and culture that they crave. The good news is I’m working toward
changing that in a major way. It involves taking over the internet and
making creativity the cultural currency.


The
internet is at such a scale it almost feels too late to implement a lot
of things that should have been thought of to protect users from its
birth. If you could start the internet from scratch what security
measures would you have in place?

There’s nothing that happens online that doesn’t or can’t happen in
real life. People will do what they want, good or bad, the internet is
just a tool. Now if I could go back and change human behavior…

I
imagine you didn’t know how huge ‘Catfish’ would become for you. Are
there any other projects outside of this theme that you’d love to have
time to do?

I believe i’m doing exactly what i’m meant to be doing, and I love it.

There
has been a lot of talk about updating the school curriculum. If it was
up to you would you implement some sort of lesson dedicated to online
safety/behaviour?

Yes for sure! The internet isn’t an extra curricular activity anymore,
it’s part of our way of life. We need to establish some real rules early
on and start a trend toward using the internet in a better and more
constructive way.

Be a positive cultural leader.

With your huge following you can achieve a lot of good. What plans are on your agenda?

Harness the power of the internet to make it a force for good. Unify
young people around the world and empower them to take control of their
future.

As
a UK based person, who has been catfishes herself, can you tell me
whether you think the UK is particularly prevalent for such activity?

Wherever there are lonely souls, there will be Catfish and trolls. (yes, i know that rhymes.)