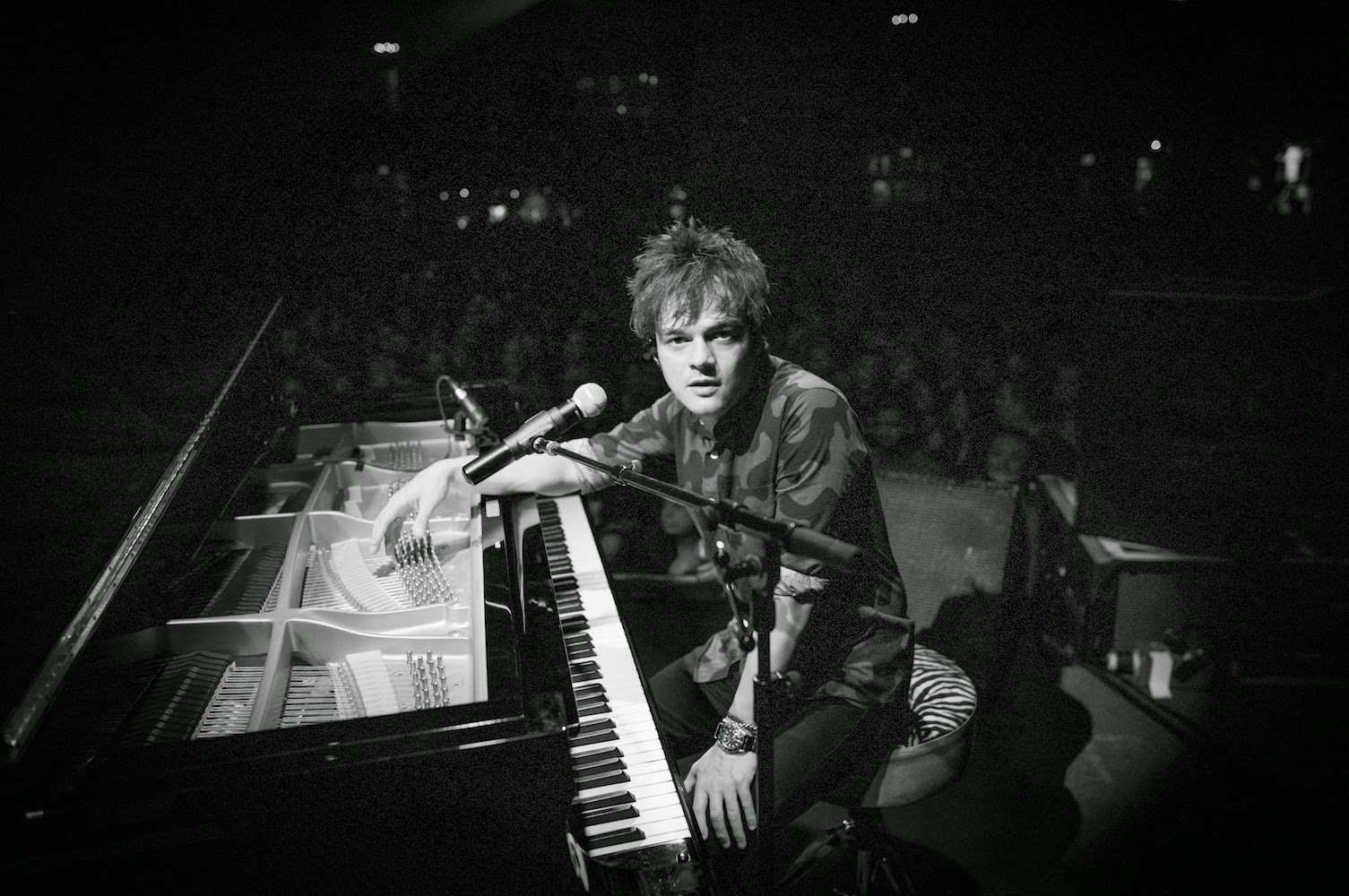 I have to open with a confession. If people asked if I liked Jazz, I used to say not really. I had been made to listen to that very chaotic form of the genre – the songs where you can’t find the melody. Do you hear from people that your music has converted them to like Jazz – as I know it did for me? Yes, but even more so the radio show. I think sometimes jazz just needs a tiny bit of information and education before hand and then the enjoyment of it can be so clear. Also, seeing it live, as so much of the joy of it hangs on the fact the musicians are creating and improvising in front of you, is important.


I saw you for the first time at Ronnie Scotts a few weeks ago. The majority of my interviews are with rock frontman, and I have to say your show was one of the most rock n roll shows I’ve seen in a while ( standing on the piano etc). Who do you think has informed your on stage persona?Ben Folds of Ben Folds Five – I stole everything from him!! Also I grew up playing rock bands really – guitar and drums. So I’ve had a lot of that in my life already. Eventually I just brought those two worlds together.


Your performance style won over the entire audience (old, young, suits etc). Are you ever faced with shocked or disapproving faces?Sure! All the time! It’s good for you I reckon. I spent the first 7 years of my career in that boat. It’s hardens you up and makes you a better musician and thus, I reckon, an important part of your development.


‘Losing you’ gave me chills. You told us how much you loved the Randy Newman song. Does taking on a song you love and making it part of your own work ever affect how you feel about the song in a negative way. Do you now see it as work (something you have to play over and over) rather than just a beautiful song?I think that is the wonderful thing about being a jazz musician – you are never required to play it in the same way! You can inhabit in a slightly different way every time you play it. It’s a bit like using the same words every day – they may be the same, but you use them differently based on so many different variables. If you have a little technique and are confident with expressing yourself, you can play a song like using you a thousand times, differently, every time.


This album is a pure Jazz, an album of standards. How did the studio and writing process differ from former albums? Did you ever feel stifled by restrictions of rules?This was very much an album where I made use of a big, beautiful room and an opportunity to record acoustic intstruments live in one room, all at the same time. We recorded to analogue tape, live and most of the album was recorded in one or two takes. I haven’t done that for a while. Restrictions can be so freeing in some ways. When you walk into a modern studio – you can do anything – and that can be so overwhelming that you end up doing nothing!


Were there any songs you attempted to cover that didn’t work when you tried to give it your own spin?There was one song, Blossom Dearie’s rendition of Love It A Necessary Evil. It just didn’t come off, it didn’t seem to have the seriousness or the looseness of the rest of the record. Other than that – everything you hear will be available. It was a busy three days!


You record melodies and ideas on your phone. I know you got a great idea after nearly being run over in Japan. Do you find your ideas tend to come at inconvenient times?The best ones always do. It was when you are off your guard and things flow into your mind uninvited. I think, in some ways, it is the secret to creativity – to always be open to the idea whether you are dicing with death or on the crapper.


Your older brother has been inspiring to you over the years. But I wondered who are the people you go to for honest opinion on new material? How good are you at taking on criticism?The producer on this record Ben Lamdin for Nostalgia 77 was a truly great collaborator as I trust his fast implicitly. Also, and I really mean this, my wife Sophie is really able to give me great insight when I’m losing my way.


In early interviews you often used phrases like ‘riding the wave for as long as it lasts’. When did you start believing that this would be a career with longevity?I always knew I’d be playing music forever, in spite of having an audience or not! I still pinch myself when I see the people still out there, it’s a true privilege.


You often refer to the piano as being a riddle. During the making of this album was it a riddle you generally solved, or did the piano try to trick you throughout?I had the luxury on some of the songs to be accompanied by a piano player, Ross Stanley, who sounds like how I wish I would sound. It was a humbling experience singing alongside him and I learned so much. It also inspired me to practice much more.


Witnessing an astonishing pianist has an emotional effect on you. How did you cope when playing with Billy Joel recently. Did you keep it together? Barely! Not only was I alongside Billy Joel but it was Madison Square Gardens in New York City! I haven’t felt quite that nervous in some time. We pulled it off though and will be doing more show with him which is really exciting.


You listen to vinyl in your studio for inspiration. Which ones did you spin during the Interlude creative process? When you listen to the album can you hear anything thats filtered through from the records?Alice Coltrane’s World Galaxy, Mark Murphy’s Rah, Duke Ellington’s Far East Suite and any Sarah Vaughn and Nina Simone. Stuff from what I’m listening to at the time always filters through onto my records, little moments that only I would recognise.


You collaborate with some incredible artists, such as Gregory Porter and Laura Mvula. Do most of the collaborations come from members of your teaming sorting them out or from personal conversations between you and the artists?It’s always personal and never the team! I couldn’t imagine doing it another way! I think duets on this kind of record, if they are purely career driven, it would throw the whole vibe of the record off. I’ve met and become friends with both Gregory and Laura and it was an honour to have them on Interlude.


When it comes to working with an artist, how important is it that you gel well and get on? Have you ever worked with someone you admired for their musical prowess where it hasn’t worked due to lack of chemistry? Pharrell and I got together 9 years ago. I played a little piano and sang on his last solo album “In my Mind”. It was an incredible week and I learnt so much, but what we worked on for me never quite to finished. It wasn’t for lack of chemistry – I think I was just too green, too in awe and too inexperienced to make it work. I hope to finish what we started some day.


When you choose to cover a song, is it important that the lyrics or them is something you can can relate to and attach your own story to?Very much so. I feel like it doesn’t have to tell my story per se, more, it needs to be truthful and human. If it means nothing to me, it’s impossible to achieve that.


You mentioned that you didn’t want to overthink what this album should be. Was it hard for you to get those voices out of your head when planning and creating. What were the voices you were trying to ignore telling you to make? When I made Interlude – I didn’t even know it was going to be my next album. It was just a collaboration with some great people. As a result, I wasn’t thinking about what it would mean in the grand scheme of things or how it would relate to my other work. And they are normally the demons that haunt you in the studio. This all felt totally apart from that and as a result all the better for it.


You’ve said that having children has made you more fearless – what brave steps has it make you take in terms of your career and the music you make? Just to take on projects, like this, like presenting a radio show – for kicks and nothing more! It’s often how the best stuff is done I think. Having kids reminds of how quickly life moves and how important it is to lead by example to your kids. If you’re going to feed them all that stuff about following your heart etc….. then you should bloody well do it yourself!


Being a parent also makes you more critical of yourself. Has it shone a light on anything specific?I think it reminds you of how important it is to take big decisions with total conviction and how much I probably need to work on doing that effectively!!


I watched you on Strictly Come Dancing this weekend, so I have to ask. Would you ever do reality TV and if so which one?That naked jungle thing with Keith Chegwin on Channel 5. It was like Krypton Factor, meets Gladiators in the buff – perfect!


Would you ever consider being a judge on The Voice or X Factor? Yes! As long as they let artists sing whatever they wanted with live bands.


Stage you’d most like to play?Red Rocks in Colorado – USA. Its the most extraordinary venue and I’d love to play there.


Recently played on your iPod?FKA Twigs


Do you work better in times of happiness or turmoil?Happiness.


Instrument you wish you could play?The harp.


Your most annoying habit?Lying profusely throughout entire interviews.


Who would play you in a film of your life?Samuel L Jackson.


Question you wish interviewers would ask you?What’s your favourite colour? No one ever asks that and I think the answer normally tells you everything you need to know about a person.