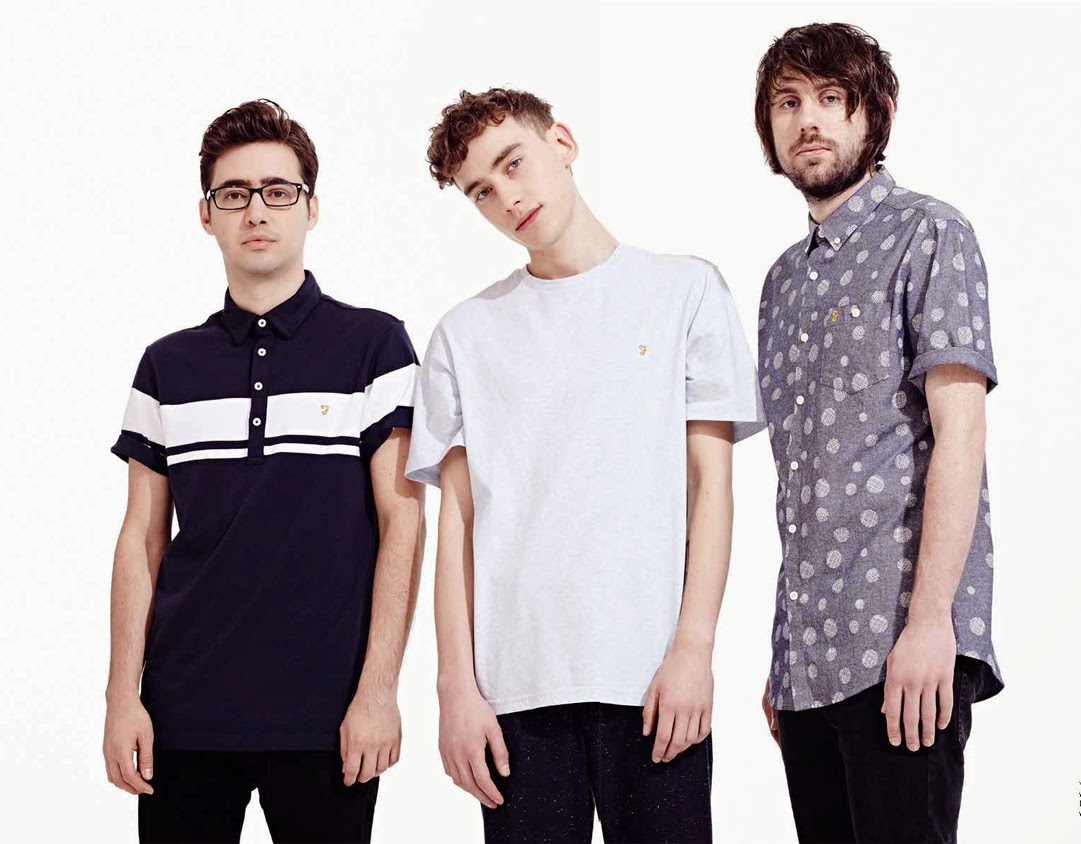 British
synth-pop newcomers, Years and Years have been tipped for major success
in 2015, crowned winners of BBC’s Sound of 2015 Poll and about to
embark on a headline US tour this Spring. They are one the bands my
industry pals and tastemakers have been tweeting about for the last few
months, a buzz band you might say. Pictured here is  Olly Alexander,
Emra Turkmen and Mikey Goldsmith, showcasing the Farah SS15 collection. I
first came across the brand Farah a few years displaying and gifting at
a trendy music awards show, and it appears their strong affiliation
with music continues. At the end of last year we also saw UK Rockers
Young Guns sporting the brand in various instagram shots.

The following words extracted from an upcoming issue of Rollercoaster.

Founded
in London in 2010, trio Years & Years certainly know what hard
graft feels like. Five years down the line however with a headline tour
locked in for Spring and a debut album deal with Polydor freshly inked,
the band are finally ready to set sail. With their synthy soul-pop sound
– see heartfelt debut tracks “I Wish I Knew” and “Traps” – you get a
sense it was only a matter of time, too.

Time
isn’t on everyone’s side though. After four hours of outfit changes,
subtly applied man make-up and copious coffee breaks. i finally get to
ask the band about their recent BRIT Critics Choice Award nomination.
turns out the guys – all charming apologies, gags and accommodating
grins – are as likeable as they are gifted.

By
now, lead singer Olly Alexander certainly knows his way around a
dressing room. you’ll likely recognise the actor from his stints in TV
shows like Penny Dreadful and Skins, or his role as a drugs-frazzled
tourist in controversial Gaspar Noe drama, Enter the Void. Towards the
end of the noughts, bored of scripts, casting calls and agents, he
started talking to friend Emre Turkmen about forming a band.

The
subject arose after Turkmen had visited a colleague’s house and heard
Alexander, said workmate’s flatsharer, singing in the showe. Turkmen
asked if Alexander would sing to an audience instead of his soap suds,
and the project spiralled from there. “We all had jobs too and it was
hard to keep everything going at first,” says Turkmen, who moved to
London from Austrailia and fell into the city’s band’s scene. “We
decided just to focus on music about a year ago and everything started
happening much quicker.”

As
well as perhaps introducing you to a band that may well soundtrack your
year, I hope you’ll all start shopping at Farah, one of the best
Menswear brands out there.