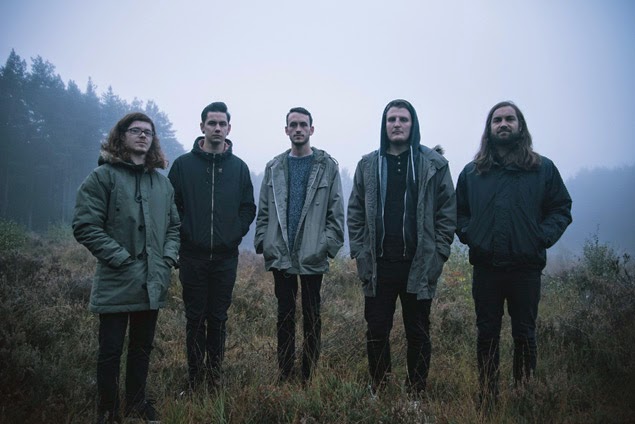 Palm Reader are one of those bands that a lot of people I respect tweet about with regular frequency. Proof that word of mouth is vital in this industry. One day off I was bored of the current playlist soundtracking my garden sunbathe and decided to give their second full length ‘Beside the Ones we Love’ a go. Damn…everyone was right. I’ve been missing out, big time. It won’t happen again… I have played catch up by not only rinsing their records over the last few weeks, but by making arrangements to ask the guys some questions about their latest release…

You’re based out of Woking, the boys from Polar are nearby and play a lot of similar events. How helpful is it to have friends in bands that understand what you are dealing with, the ups and downs etc?

Having friends that are in bands is very helpful. If it’s not a shoulder to cry on, it’s an instrument to borrow, a van to borrow, a floor to sleep on, a show to play or just the fact that someone else had made similar decisions in their life.

When your debut receives such a rave response, and people like what you are doing, can that be a hinderance to you evolving your sound? Do you find yourselves wary of experimenting in case it veers to far away from what people have liked in the past?

The simple answer is no, I guess. We try and focus on what makes us happy musically and that way, I think the response will always be surprising. Experimentation is what pushes things forward. Being afraid to experiment should scare people.

Having lived and toured as a band for longer do you feel this second effort is a more accurate depiction of you? I imagine in many ways a first album is a good way of discovering where you don’t want to go as much as where you do.Perhaps on this occasion you could figure out exactly what you wanted to create?

That’s how I feel about this release, yeah. It’s definitely a more focused delivery.

Your structures and use of crescendo and builds creates a cinematic sound at times throughout the album. Do you guys turn to films and/or films scores for inspiration? Are there any other mediums that have inspired you this time round?

In terms of inspiration, I don’t think we’ve really ever used anything in particular to get juices flowing. Although, I think the doom element of the album had something to do with the lack of sunlight we saw whilst writing the majority of it.

The reaction to your second album has been extremely positive. When you wrapped up the record did you all feel confident that people would respond well, did you feel it was one that would connect? Do you get an instinct about such things?

When it was all finally finished, I felt so happy with what we’d done that I was oblivious to the fact it was being released! I think we all felt that way, haha. I definitely felt like we’d hit a few nails on the head though, like it would connect more than bad weather.

Do you wait to hear from your manager/pr that the response is generally positive before you immerse yourself in reading reviews and responses? Is it hard not to nit pick reviews, if they compare you to an artist which doesn’t make sense for example…

Haha! No, we don’t wait until the reviews are good to read them. There are some great reviewers out there, that don’t just attack bands when they’re not a fan of the album. I guess when all you have is words, you have to use them violently to get people’s attention sometimes.

I know when I make art I need to step back for a bit and take a look after a break to realise whether it’s working or not. Do you sometimes have to take a break from the immersive experience of writing to be able to be critical about the work?

Sometimes we’ll have to leave a song and come back to it. But then other times it just flows well, we keep going and when it’s done, that’s it! Taking a step back to figure your shit out is always a good idea though.

If it was up to you what would be the best environment in terms of encouraging creativity?

A house in the middle of nowhere, with a recording studio on site. The studio would have a decent sized live room with everyone’s gear set up and mic’d up. Ready.. Steady.. Write and record whenever you want!

Your press release tells us you worked in a rather bleak, dimly lit studio. Do you always find the environment you create it has a huge influence on the atmosphere of the songs?

I wouldn’t say it’s always affected our writing. But it did this time!

It has also been mentioned that you appeared to have quite a break in between releasing albums. You were still tirelessly gigging, were you also constantly writing during this time or did you allocate a specific slot of time to write/make the second album?

We had written a decent amount of the album in between shows and just generally over the course of but I’d say the majority of it came from a few weeks worth of writing sessions that we’d booked up. I guess you could call it organised chaos.

A lot of bands that tour heavily say that the writing became stale, because they weren’t living real life anymore, it all started to be about life on the road. How important is finding the balance, not just for your sanity, but for you creativeness?

Finding the balance is important. Saying that, I don’t think any of us have ever really struggled too hard to balance. Unless intoxicated.

You haven’t chosen a genre/sound that makes your life easy in terms of making good money/commercial radio play in 2015. Have there ever been discussions throughout the bands life about perhaps steering your sound in a more radio friendly direction?

It’s been mentioned on a very regular basis since we started writing songs, but only in a hilarious hypothetical way.

You have said that you wanted the lyrics of the album to encourage people to express and exchange opinions, talk more, have conversations. If you are honest would you say you guys are all good at doing that outside the confides of your songs. Do you guys vocalise things easily with each other? Do you feel comfortable expressing opinions within the band even if it opposes the majority?

None of us have a problem with speaking up. It’s encouraged to be honest, especially if you’re not happy about something. We’re all on a similar wavelength for the most part, so that helps too!

I see you are playing alongside Will Haven and Raging Speedhorn. Will Haven in particular take me back to my youth! Do these bands hold some significance for you? How do you use the experience of working with established bands to further your progress?

They hold some significance for a couple of us I think. You’ll always learn from touring with an established band, whether you realise it or not. You may not get some life changing advice backstage from your hero, but you’ll sure as fuck come away wiser, dirtier, with more friends and with some real experience that might actually benefit you in life.

Do you play it cool when you meet your heroes?

Oh, of course! Well, everyone thinks they play it cool. In reality it’s probably the opposite.

You also have some headline dates. Will you use the response from the crowds to gauge what songs to release from the record next? Are you sometimes surprised by which ones seem to connect the most?

I guess we’ll have to wait and see haha! I don’t like gauging the popularity of songs off the crowd response. A lot of people like to stand at the back, have a drink.

Song that makes you cry?

Songs that fires you up?