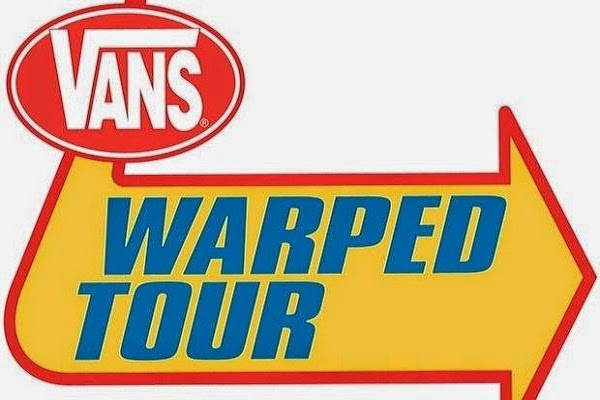 Since 1995, The Vans Warped Tour has been a staple of the Summer Festival circuit in the USA.  If you were to read the HUGE
list of talented artists who have performed over the last 21 years it
reads as the “Who’s Who” guide to the best rock, metal, pop punk and hip
hop.  Everyone from Eminem to Katy Perry – NOFX to Less Than Jake. A lot of my friends have attended or played the tour, and I have to admit I’ve always thought about jetting off the US and getting involved. Something always seems to get in the way of this plan though. Maybe this is year will be my introduction to the Warped way of things….

In 2013, London’s historic Alexandra Palace was transformed into a seething mass of punk-fuelled energy as the VANS WARPED TOUR rolled into town.  The best of punk and metal, with the likes of Rise Against, Parkway Drive and Enter Shikari
performing for over 15,000 enthusiastic fans.  The good news is that it will be returning to out capital, back inside “Ally Pally”
on 18th October 2015.

A limited amount of Early Bird tickets are available now – Don’t snooze!  Get your tickets early!

Warped
Tour founder Kevin Lyman: “Due to popular demand and the ability to put
together a stellar line-up, we look forward to bring the Vans Warped
Tour back to the UK”

Not only was the 2013 line up one of the most impressive festival bills – seeing incredible performances from Neck Deep, Yellowcard, Hacktivist and a secret acoustic performance by A Day To Remember –
the festival also featured a full merchandise market area, signings,
giveaways, and all the fun of the Warped Tour under one roof.

In addition, the VANS WARPED TOUR
also ran an initiative which saw the donation of hundreds of food tins
and cash donations after fans were invited to support the Islington Foodbank and the Trussel Trust to
help those in need in the local community. A huge amount of money was
also raised for Teenage Cancer Trust via guest list donations and their
booth, which saw the likes of While She Sleeps and Crossfaith stop by to meet fans and support the charity.

The line up will be released on June 17th….. who would you like to see on the bill?