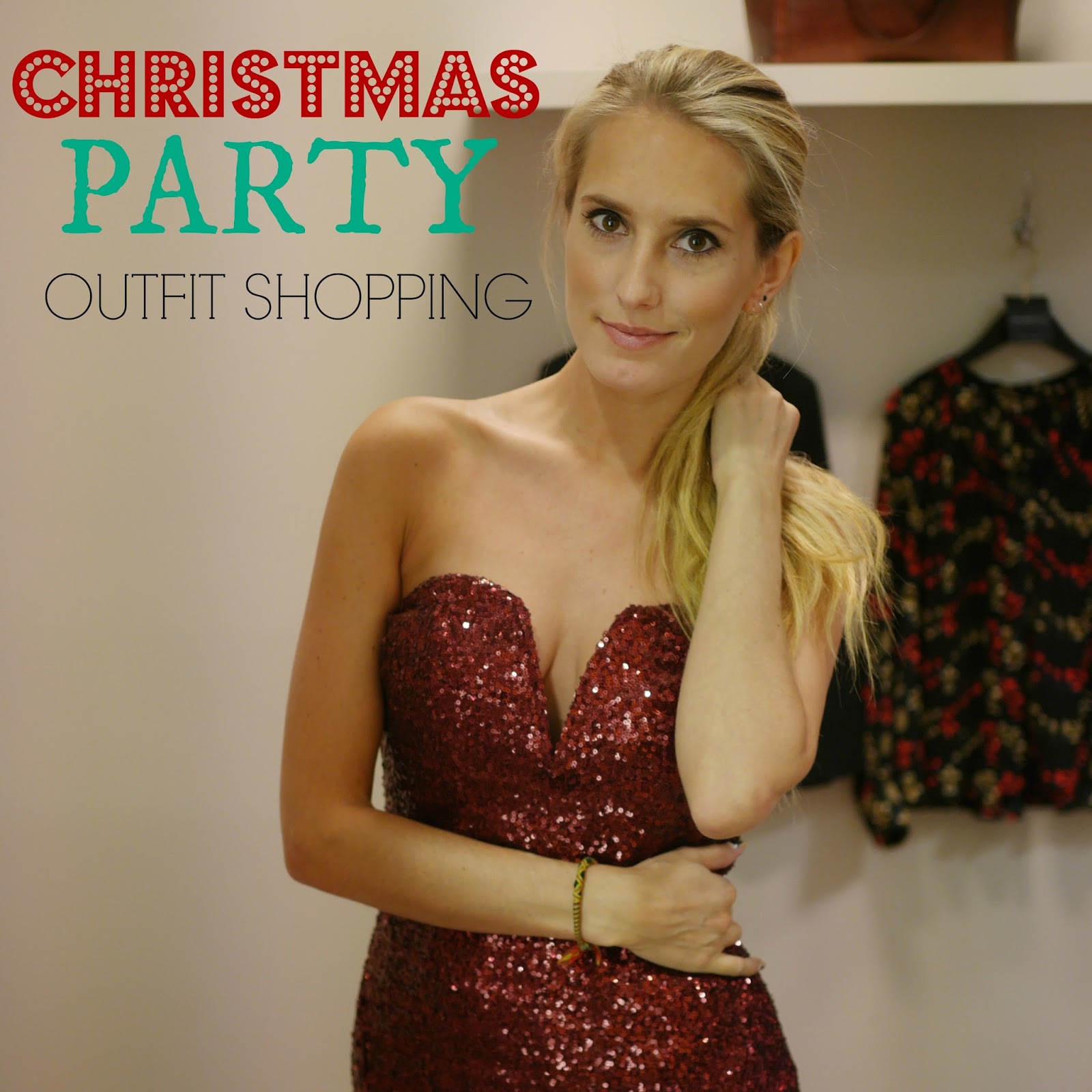 Not all of us have the time to thoroughly consider our appearance on a daily, weekly, or even
monthly basis. However at Christmas there is usually at least one event or occasion that you justify
allocating some ‘get ready’ time to. If you are used to penny pinching throughout the year,
Christmas is also that one time that you may (and should) allow yourself a treat. I have a work
party and a wedding to go to in December, and was looking to tick off one of those outfits during
this visit. Before heading to Centrale Croydon I clicked on to the Centrale Plus App (download via Itunes or Google Play) and used the Discover

Tab to remind myself what stores I needed to try and browse during my fairly short trip.

For a traditional take on glamour and elegance both Debenhams and House of Fraser have
timeless gowns within their Occasion areas. There are also oodles of red carpet worthy gowns,
mainly embellished or glitzy, by the likes of Quiz and Biba – who had opulent accessories to match.

LEFT TO RIGHT: BIBA, QUIZ, COAST, QUIZ (ALL AT HOUSE OF FRASER)

If you’re off to a ball or swish VIP Christmas party in the next few weeks, House of Fraser have
created a specific area displaying some of their most captivating designs, just for your
convenience. Principles by Ben de Lisi at Debenhams, Hobbs, Phase Eight and Coast (all at
Debehams and House of Fraser) have numerous failsafe LBD’s, as well as many simple but
elegant dresses in shades that pop.

Another style route one can take while staying within classical realms, is the female tux. I found
some stunning tux trousers in Coast (within House of Fraser), which were tailored to perfection. I
teamed them with a caped blazer from Miss Selfridge and ended up feeling like a strong and
confident woman. Power dressing at it’s most chic. Mango (House of Fraser) have some fantastic
suiting and accompany shirts, as do Zara and Next – but ensure the cut is dressy not worky.

I always associate star prints with icons sporting rock n roll attitude, so I was drawn to a number of
pieces from Nine by Savannah Miller (at Debenhams). Such a Killer collection, particularly for
those with a style that teeters between boho and rock. Leather is another fast track to becoming a
hedonistic hero this party season – head to Zara or Warehouse (within House of Fraser) for these
sexy shifts. Spikes and studs instantly toughen up any look, so grab yourself some spiky
accessories from House of Fraser, Next or Aldo. I found studs decorating a simple shift from
Episode (House of Fraser), elevating a classic LBD to a much cooler status. Think outside of the
box too – elegant gowns can be transformed by smudgier and darker make up. I think this floor
length gunmetal gown from Quiz Clothing would look stunningly gothic teamed with a dark plum lip. !

There is lace for all ages at Centrale. Lovely and ladylike or lavish and lust-worthy, there’s
something for every style of dresser. For sophisticated styles Jacques Vert in Debenhams had
huge array of options in beautiful violets, navy and frosted greens. Coast in House of Fraser had
lace gowns as well as those that used elements of lace within the designs. It was a similar story at
Karen Millen who stole my heart with a high neck figure-hugging black midi with lace shoulder
inserts. Lipsy had all trends covered, but head to their area within House of Fraser for sexier takes
on lace. For sumptuous velvet Jacque Vert delivers for a mature lady, while The Petite Collection at
Debenhams had a perfect purple body con tapping into A/W’s jewel tones.

There’s some well known style advice say that says you should take off at least one of your
accessories before leaving the house. It’s very common for us ladies to over complicate our looks.
Channel this mindset when shopping for this particular trend – simplicity and/or clean lines are key. !
Simple 90’s style strappy dresses like this black velvet one from Therapy (House of Fraser) can be
slinky and sexy with the added bonus of being extremely strokable. Lipsy, Hobbs, James Lakeland,
Karen Millen, Coast, Hobbs (House of Fraser) and Phase Eight, Red Herring, Oasis, Red Herring
and Warehouse (within Debenhams) all deliver unfussy looks that would benefit from one
outstanding accessory like a cuff (Aldo had my favourite examples).!
Paired down make up should accompany this look – consider the A/W trend for glossed up lids and
cheeks. If that’s too stripped back decide between a bold lip, or statement eyes. !

There are entry level disco looks, with sequinned dressers in dark or muted tones like at
Warehouse, Red Herring and Phase Eight. Then there’s the next level, like these dazzling gradient
sequin shifts at French Connection. If you want to emulate a front woman of a legendary disco
band or even rival Beyonce’s stage outfits then look no further than a gold number by Untold or
TFNC (House of Fraser).
There were some stunning velvet platforms by Red Herring in Debehams perfect for achieving diva
status, but you should most definitely head to Aldo and Next for show-stopping heels too. If you
want to add glitz via accessories Aldo had the most stunning crystallised clutches, although their
black furry one would add frivolous fun to your club aesthetic – very ‘Dee-Lite ‘Groove is in the
heart. ! 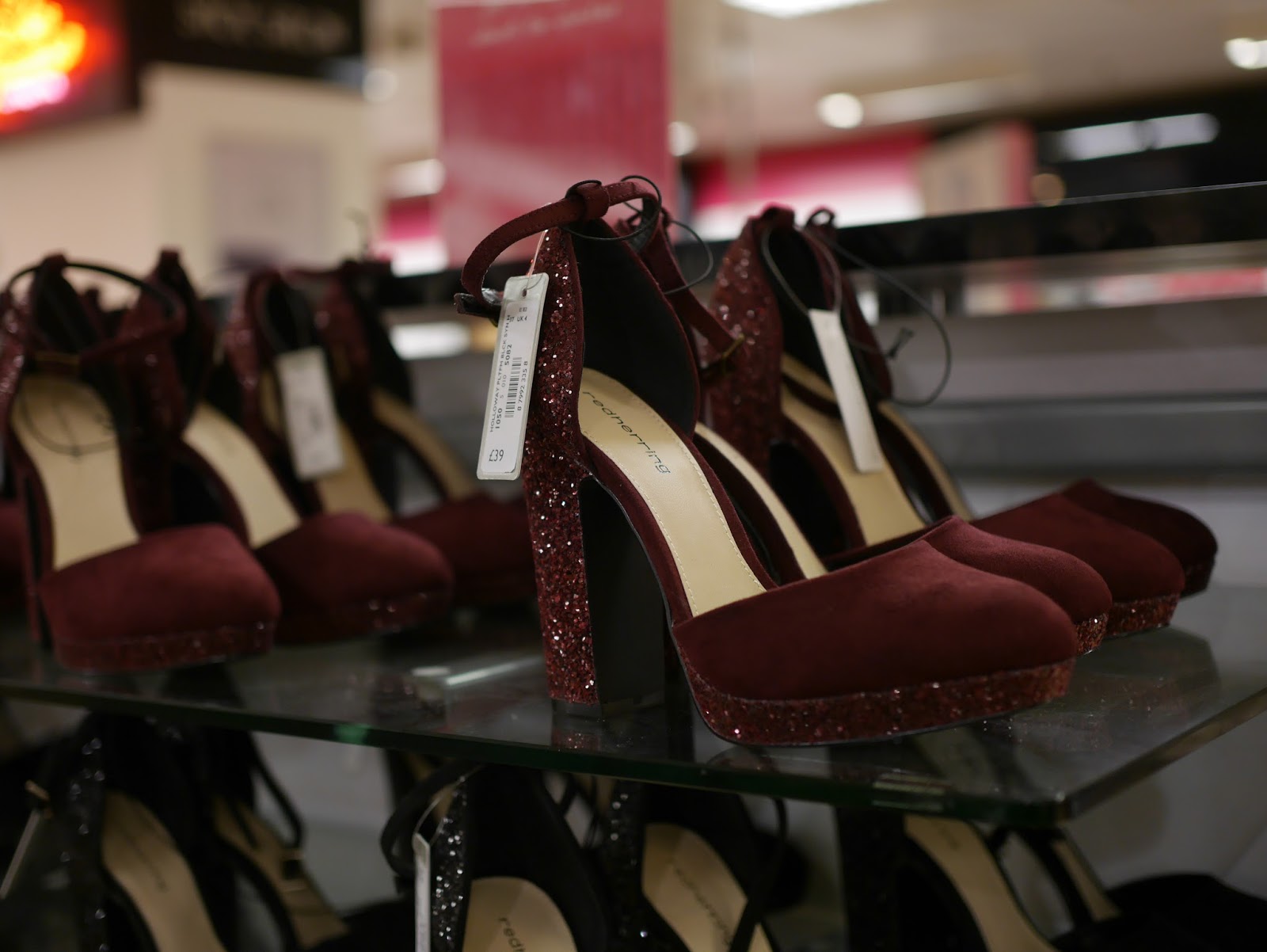 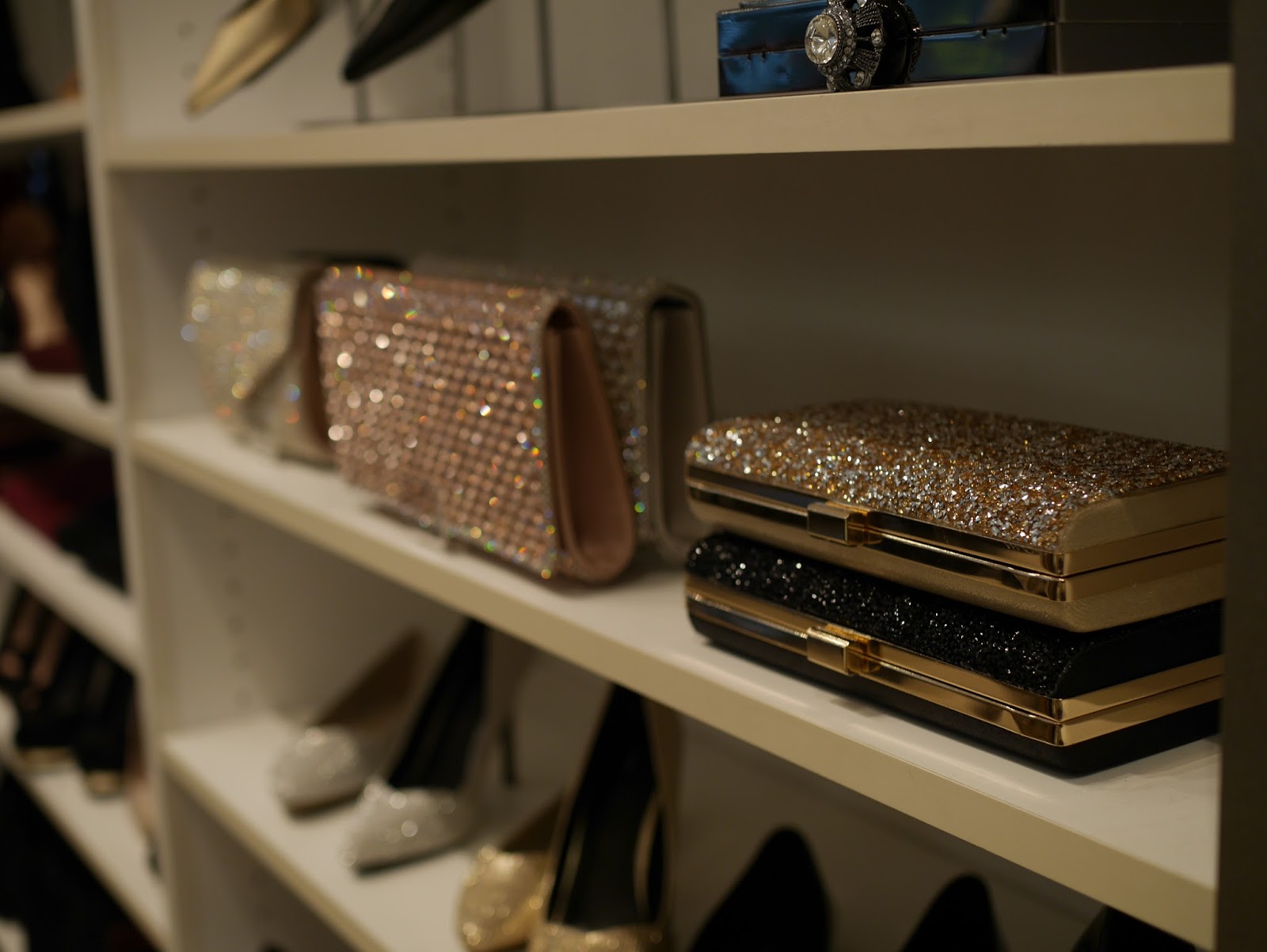 After falling in love with a Karen Millen LBD and an electric blue gown from Biba, which were sadly
out of my self appointed budget, I found a new crush in a flirty black and gold number from Miss
Selfridge. I thought it was something Kate Moss would wear, which immediately placed it in the
Rock n Roll category. To carry on this theme I wanted to team it with some boots rather than the
obvious party shoe. I found some superb black suede boots in Aldo, which give the ensemble that
desired edge. I’ll complete my look with my leather biker jacket. Perfect for my music industry
Xmas party.

So if you’re going to nip to Centrale Croydon, to revel in the convenience of their two large
department stores, make sure you download the Central PLUS App (available on Google Play and Itunes) . If there’s any savings to be
made that will help you afford that outfit enhancing accessory, I’m sure you’d like to know about it!! 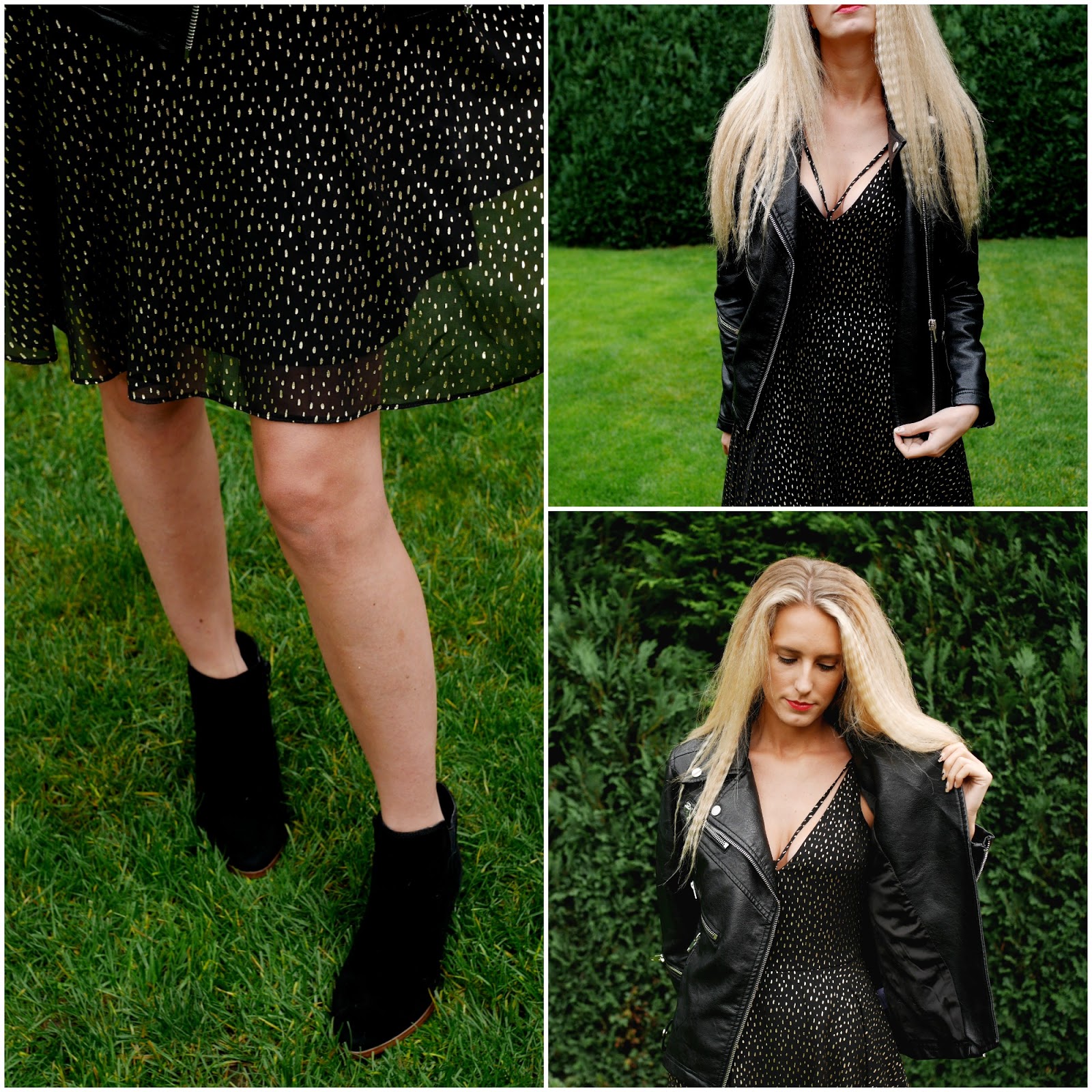