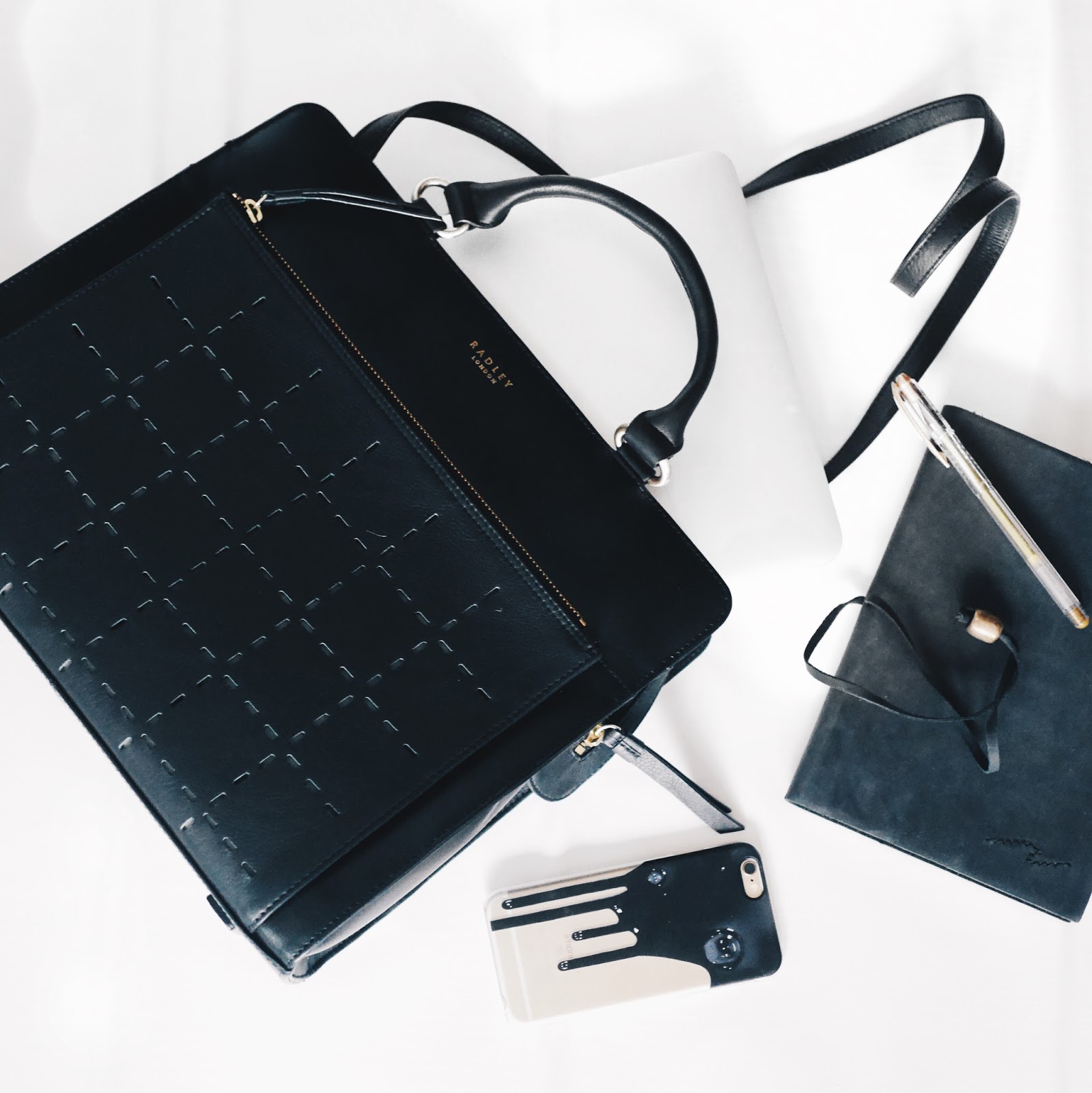 I’ve been spoiled over the last few months. Si has been home (not on tour) and we’ve been able to spend a lot of time together and do normal couple-y things. After the looong awaited release of Ones and Zeroes we thought a lot of touring would follow, potentially abroad. Things didn’t end up going that way, so instead the boys were planning the next album and trying to ensure that it was quick process unlike last one’s slog. Of course it’s great to have my fella about, but it undeniably has an effect on my productivity. Knowing that he is always just a management decision away from leaving the country for a long period of time, means that you feel you should always make the most of him being nearby. Soak him up as much as possible before he leaves again and you’re only contact is Whatsapp and some very delayed/robot voiced skyping.

It does rather get in the way of my workaholic tendencies though. I will admit to finding it very difficult to find the right balance. What usually happens is I work super late to compensate for the time I’ve spent with Si (that could have been blogging time). I’m then grouchy and zombified for the next time I spend with Si. We might then have a barny and I will then not be able to concentrate on work…Ugh. Tricky isn’t it? I wasn’t going to go into detail about this because I have that planned for another post…but just to create the picture.

Let me get to the point. So I now know Simon is going to be away for a large part of the year…six months at least probably. Which is obvisouly crappy for me, the one who is left at home. However, I know that it will mean I will really be able to knuckle down workwise…with the added bonus of it being guilt free.

So knowing this is going to be a very work orientated year I wanted to make sure I was fully equipped, and that I have done everything humanly possible to get myself in the zone, mentally.

First up, a job I’ve left for far too long…. cleaning my room. This proved to be the most exercise I’ve had in…well, longer than I should admit. I even put on rubber soled shoes so I could get all my malted hair off my carpet and into disgusting balls, which nearly pulled a muscle in my negelected calf muscle. I’ve also tried to file all those annoying invoices and order forms that only serve as a reminder of how little your earning and how much your spending (too much). 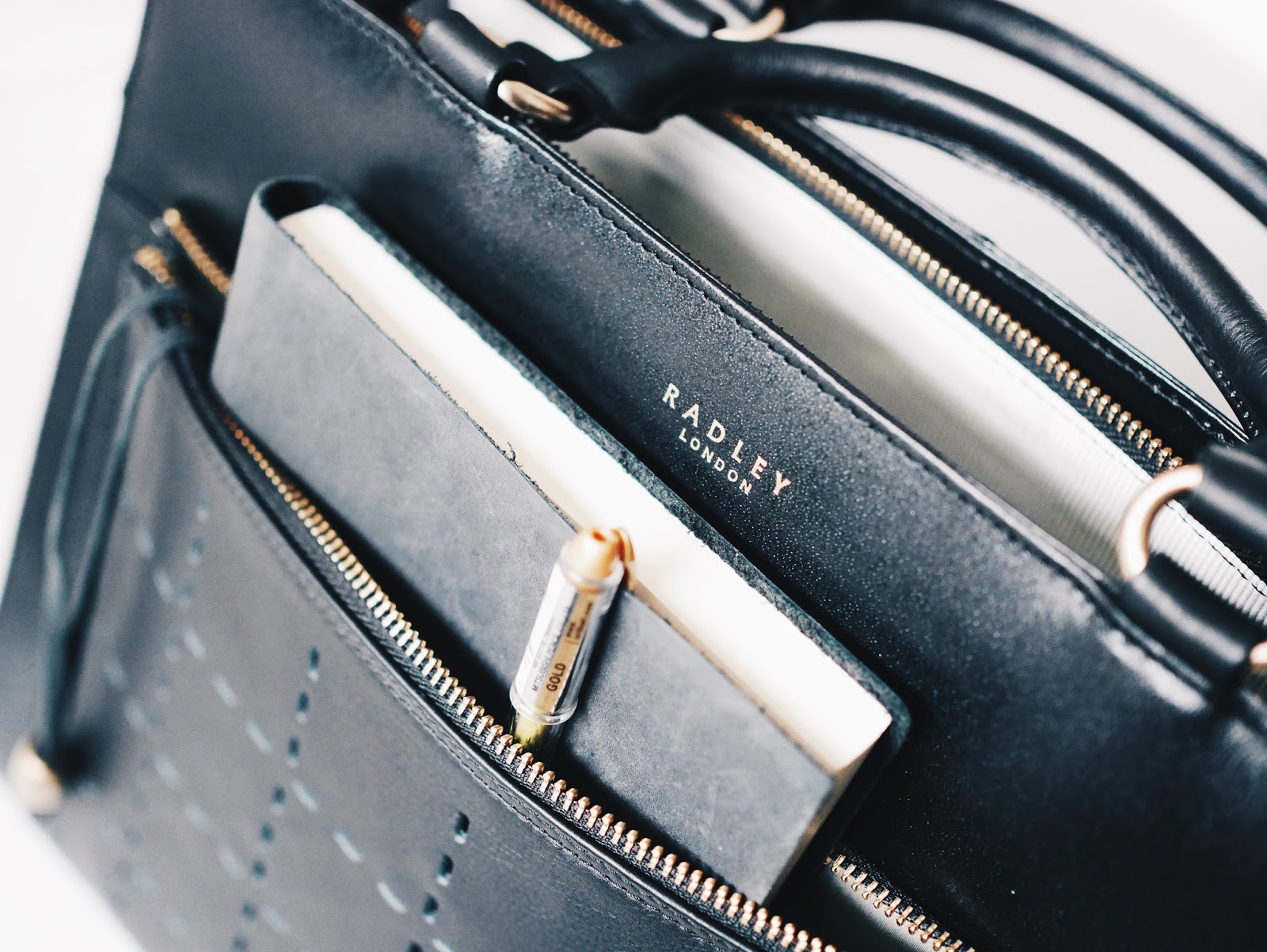 Today’s job was cleaning up my desktop. I have to confess that I’ve let my pal Jenn Im down. When she was last here and we had a chilled work day, she looked at horror at the cluttered nature of my desktop. She had a few rogue files on hers and had been feeling bad about it. So I like to think that I did her a service…made her feel like an

She very kindly got to work creating folders to organise all the images, movie files, and documents that were all on top of eachother, and almost completely hiding the background image on my screen.

Once her work was done, which I’m sure she secretly enjoyed, I vowed to maintain it. I knew, even then, that this was someting I wouldn’t be able to maintain, but I wanted to at least instill some hope. 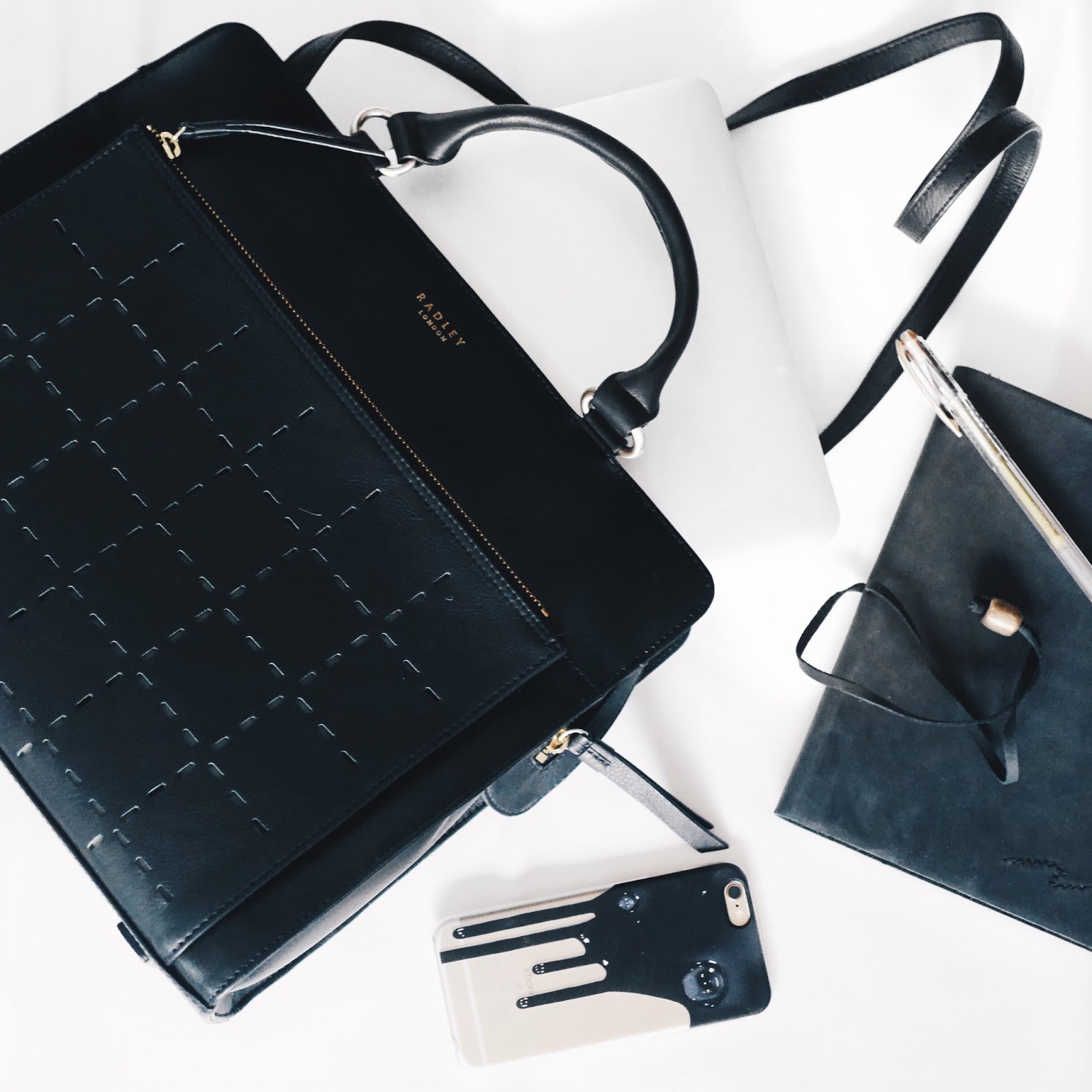 I’ve also bought an organiser, something my friends have been trying to get me to do, and use, for years. They’re quite used to me forgetting things that we’ve put in the diary…mainly because I didn’t have one.

I have loads of rucksack bags that I use when going from place to place and carrying out my work duties. Due to the fact they’re canvas, cavanous and cheap…I generally just chuck everything in, without considering care or organisation. They always say muddled (insert object/space) equals muddled mind…

So I decided it was time to be a proper grown up, to step out of my ‘I’m still young and can get away with wearing my teenie scenie clothes’ mindset for a little bit. It won’t last…but here are my thoughts.

They always say dress for the job you want. I’d like to be considered put together, sophisticated, efficient etc….even if just for a bit. I’d also like to be able to put my hand in my bag and know I’ll be able to find what I’m looking for…without a panic or getting biscuit crumbs stuck underneath my nails. It’s not the best look at an important meeting. You never heard about the girl that got hired because she had morsals of food decorating her nails did you? 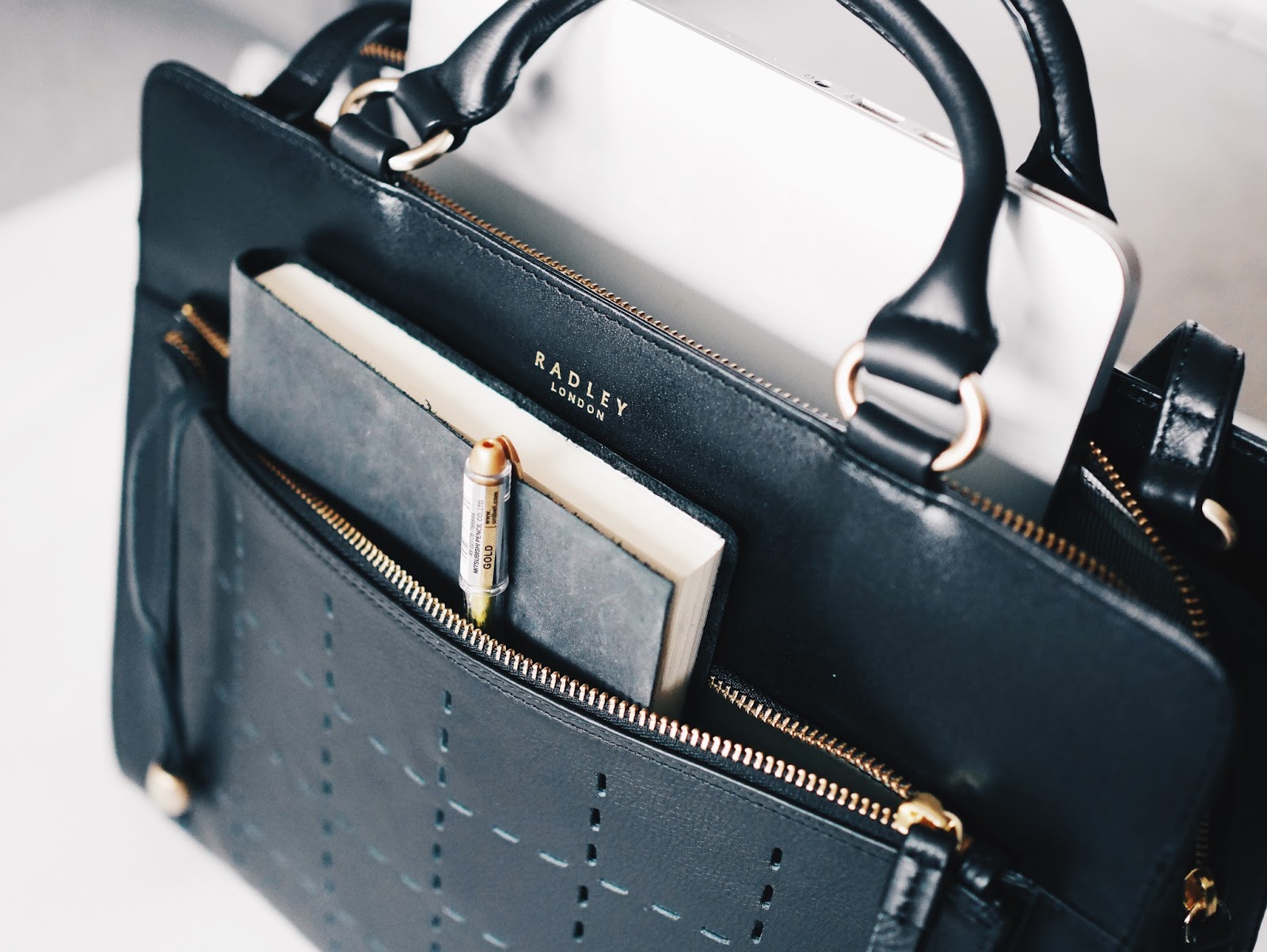 So who would deliver this wondrous bag, full of life improving qualities? None other than Radley London, that’s who!

As you can see from the picture above there are numerous helpful pockets. It’s made of sturdy stuff too, so you feel like the items contained within would be protected and kept firmly in their rightful place.

It is also roomy enough to house my Mac and has some useful smaller pockets inside for that other ‘I’m an efficient and professional lady’ paraphernalia.’ 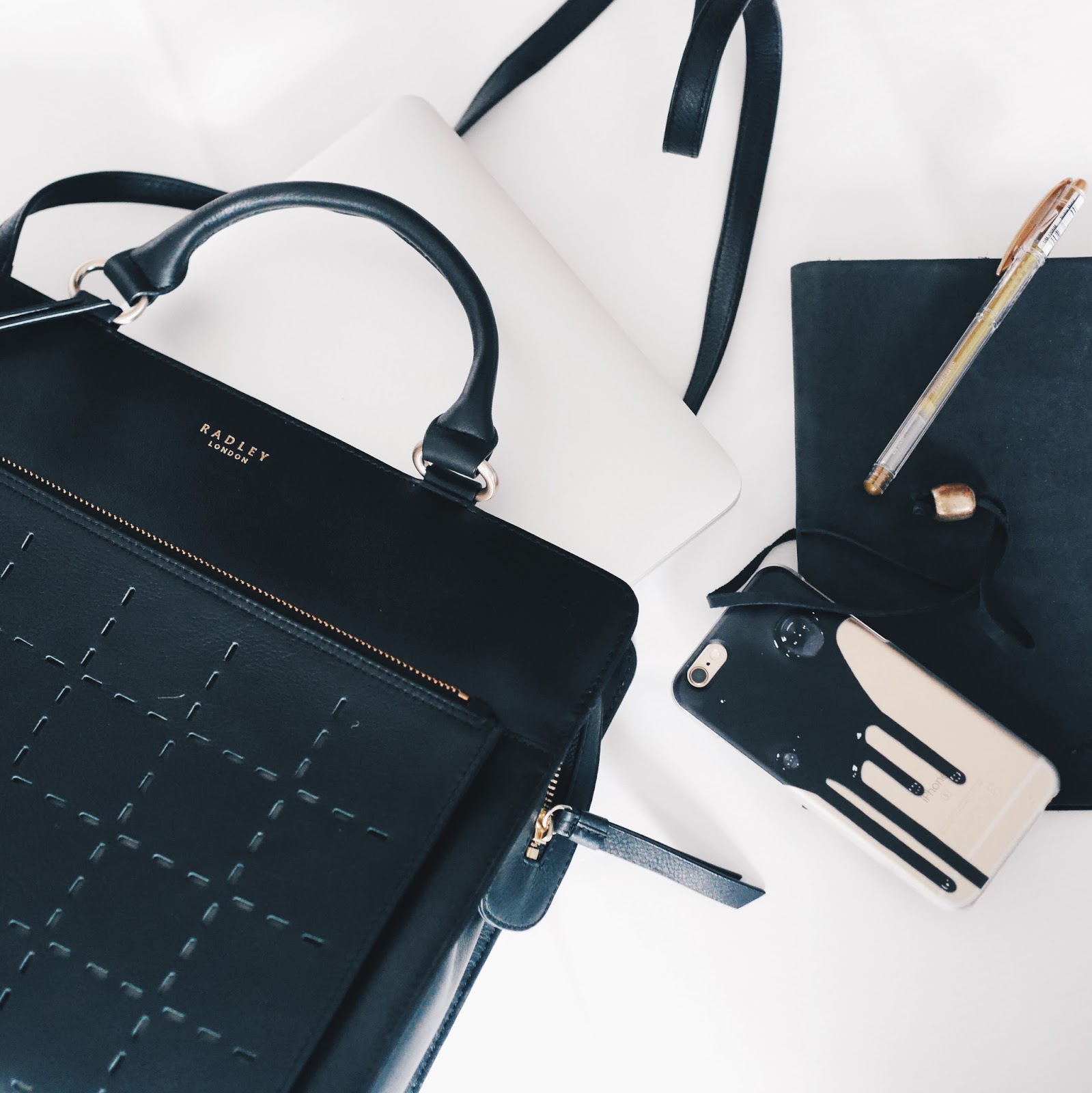 With it’s gold branding, and hardware it’s bloomin’ pretty too!

If you are interested in purchasing your own proper adult bag then you’ll be pleased to know there’s a sample going on right now! You’re welcome…. 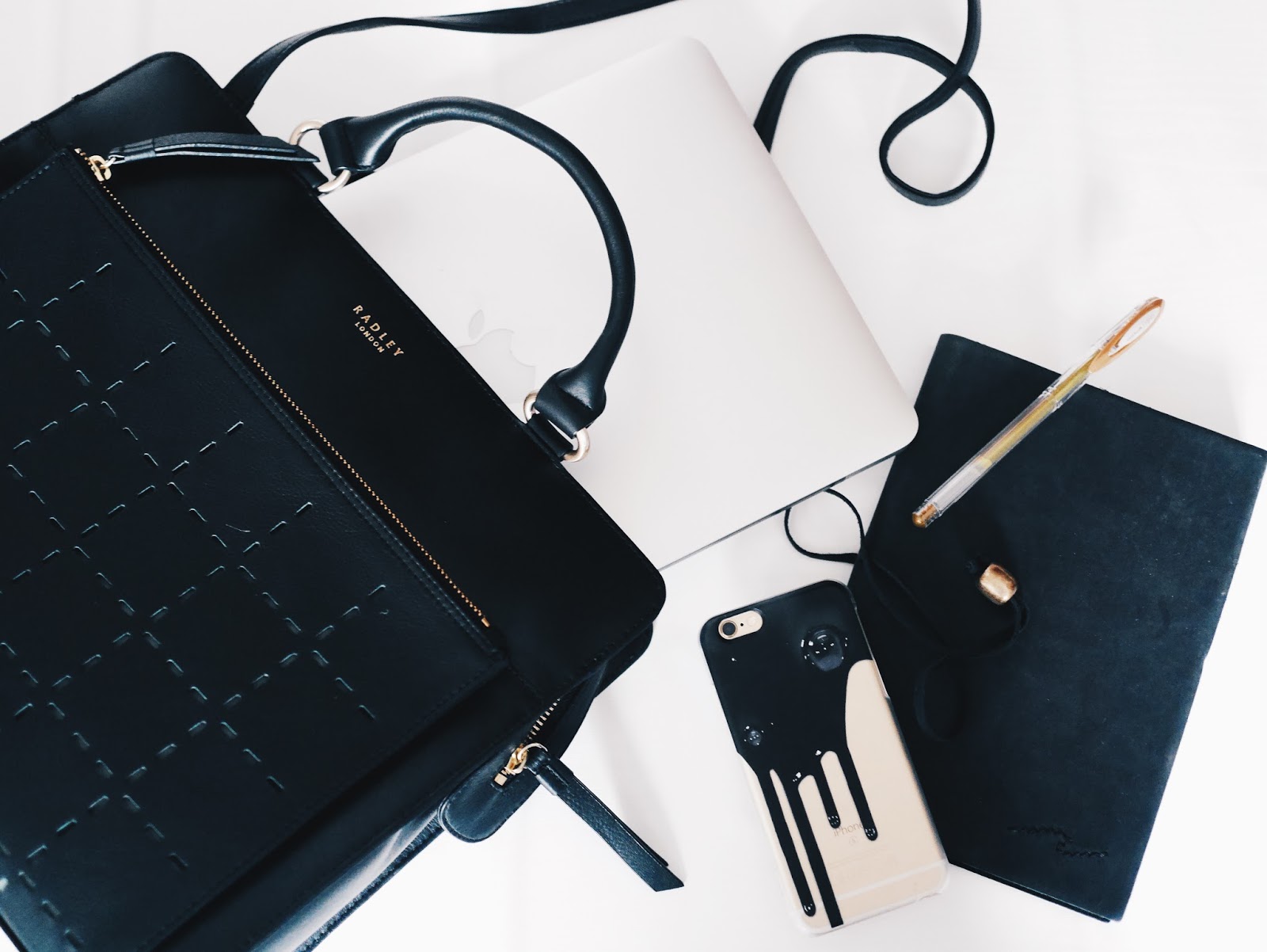 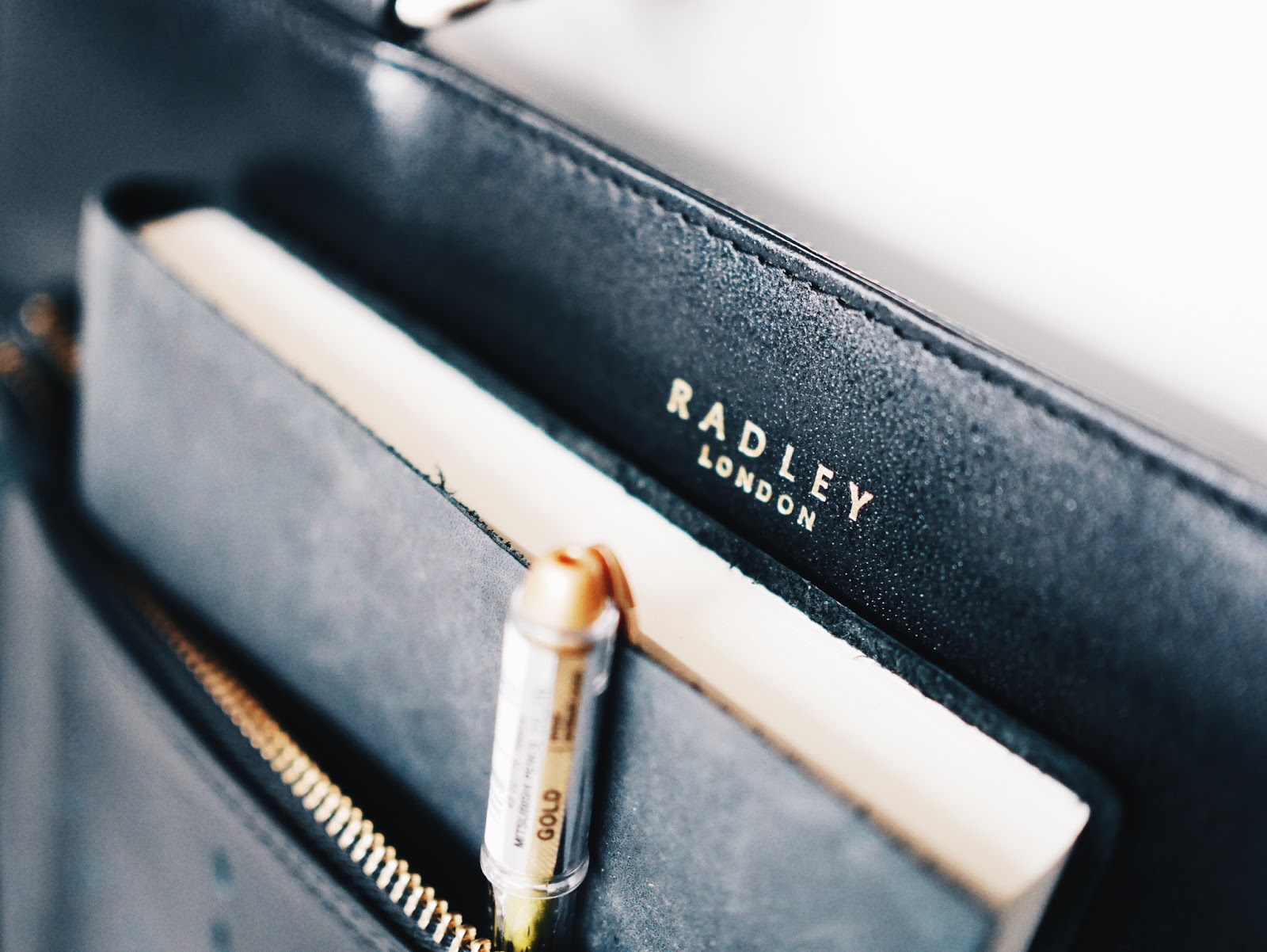