Just before I left for New York I receieved a wonderful delivery, something I will treasure for the rest of my live and pass on to my kids (when I eventually get round to having any that is).

This wonderful David Bowie pictoral newspaper book had the wow factor on first sight. Large in scale, glossy black leather, with luxurious gold embossing on the front. But what makes this book even more special is the personalisation available with each purchase. Mine arrived with my name shining at the bottom of the cover, with a certificate of ownership inside with the quote ‘you remind me of the babe.’ If you are thinking that this might make the perfect gift for someone in your life, you can add up to 150 characters in your
chosen message, making it perfect to mark any special occasion. 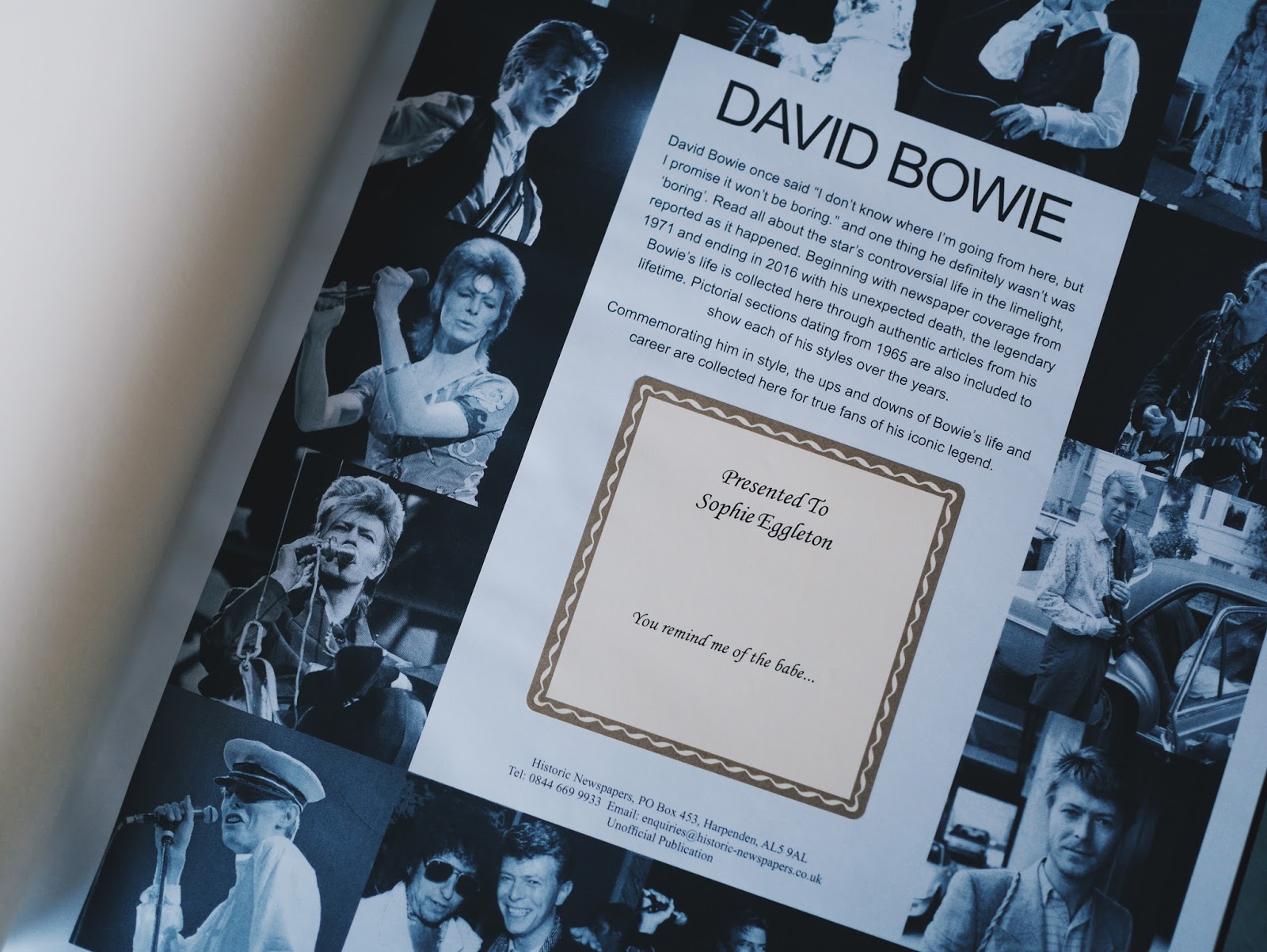 Starting from 1971 this book looks through 45 years of David Bowies
life using genuine newspaper articles right up until his tragic and
untimely death in 2016. The book contains 130 pages and gives the reader
an insight into his scene and history making music, his outlandish style and rollercoaster
personal life, such as his marriage to a Angie Bowie and the birth of
his son, followed by divorce. It also features reports referring to his acting roles and his ongoing struggles with addiction.

Death is always sad, and it seems odd to scale the level of devestation associated with a particular passing. However, it is undeniable that David’s shock departure left the world reeling and feeling like we’d lost someone incredibly influential and unique. As I said in the post about David I uploaded shortly after I heard the news, I think my (and many others) dramatic reaction to the reports was largely due to the shock factor. Not just because we were unaware of his cancer battle, but because he was so otherwordly you almost didn’t associate him with normal human struggles and scenarios . I, and many had elevated his to such a pedestal, not just because we loved him and the art he created, but because he was so different, it’s like he didn’t belong with the rest of us, he was in his own universe making up his own rules. I just never even considered a world without David creating new, trailblazing, bizarre, jarring, conversation inducing work.

But then there’s another boggling issue when it comes to assessing what was so special about this confusing idol – why did he gather this huge and dedicated army? We so often talk about his difference, his alien quality, being the misfit and so on, but at the same time we procliaim that’s what drew us to him. His willingness to challenge in terms of art, style, sexuality (and more), made us feel like we could be who we wanted to be, and that our own idiosyncrosies should be exposed and embraced. The fact they we associated so well with this so called weirdo means that perhaps he wasn’t a weirdo at all, perhaps he was just braver than many of us are when it came to being his true self.


I would say this is a must have momento for any Bowie fan, but I actually think it’s something that anyone with an interest in music, history, culture, photography would get a lot of enjoyment from too. I left it on the lounge coffee table for the first few days, and everyone that lives with me, as well as those that visited, found themselves ingrossed in the chronicle. It would strike up so many coversation and debates – how things have changed over the years,  the hold of addiction, the state of the music industry, gender fluidity, how the landscape of celebrity culture has developed… We also found ourselves sharing our feelings and memories associated to David,  chatting about the the era’s, albums, movies we treasure the most, and how each one effected us differently. 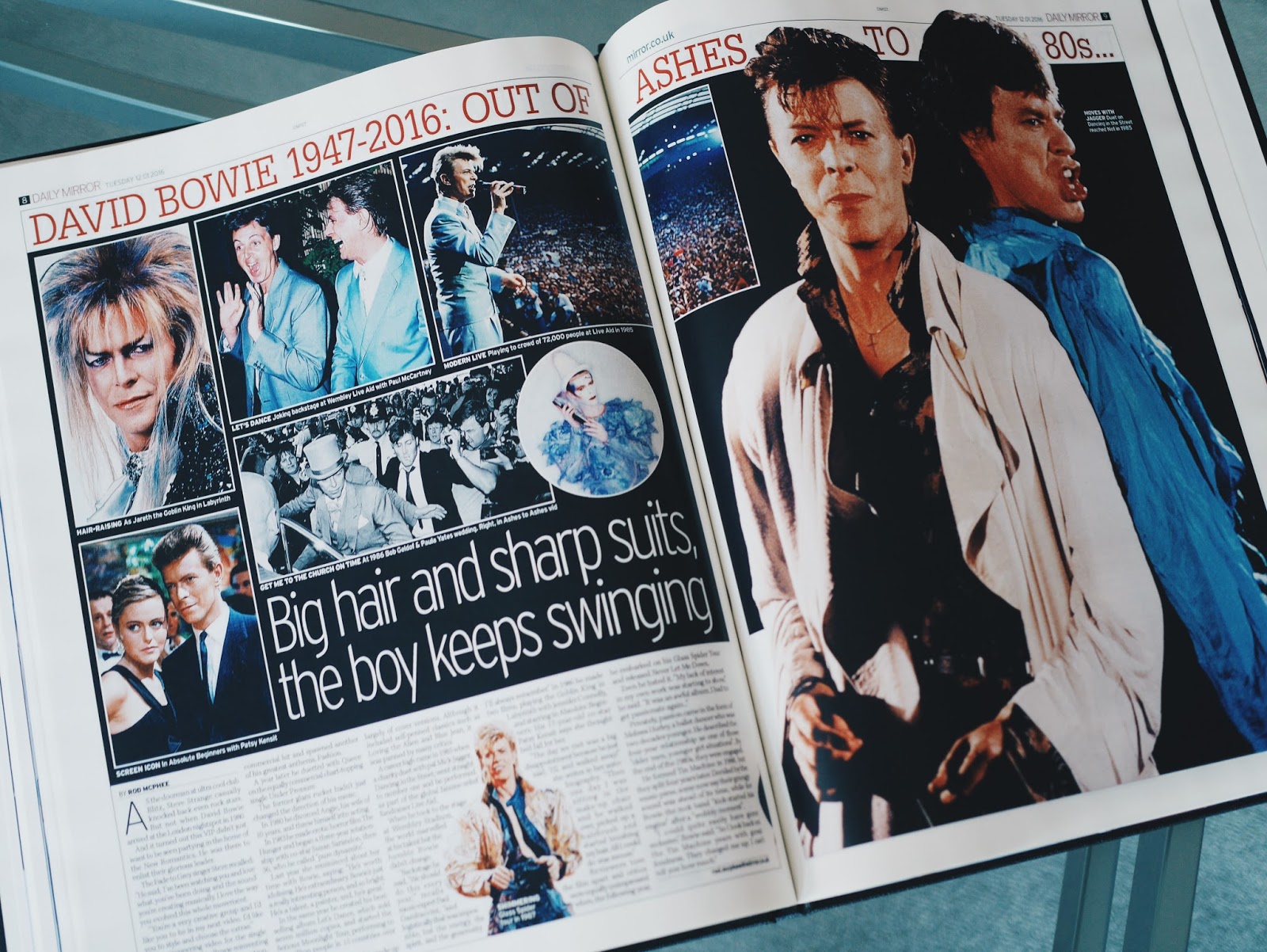 Of course David’s stories and images are the stars of this book, but it’s also pretty fascinating to see what else was happening in the news at the time of each article. They’ve included surrounding columns and pieces on the newspaper pages so you can also guage the mood of the time, the events that were happening, the political climate and so on. You almost feel you are being transported to by gone decades when you delve into each page.

If you are still struggling to come to terms with David not being around any more you may shed a tear or two whilst turning the pages of this tabloid diary – but the tears of sorrow will be diluted with joy too. The images of David with his stunning wife Iman are filled with happiness and love, and you will be reminded that he was a man that achieved so much, not just in work but in his private life too. His life was full, giving so much to others not just through his art, but via charity work and friendship. What a man. You can buy the book from Prezzy Box here…