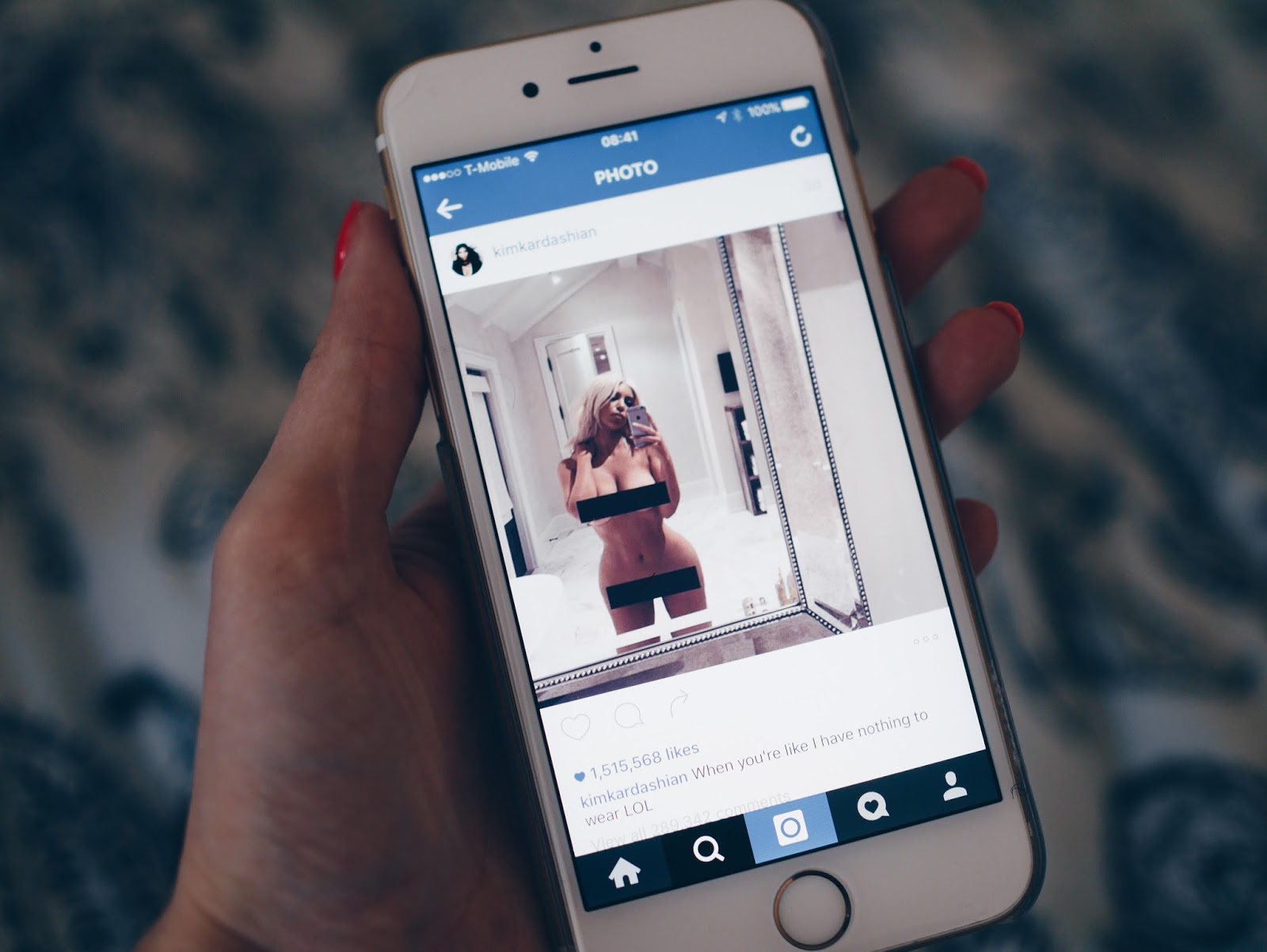 I have had some hesitations when it comes to writing this particular post because, goodness knows enough people have taken to social media and news and gossip portals to express their views on the matter. However, the last few hours I’ve found myself consumed with looking at the merits of both sides of the Kim K fence. I wanted to think of a more humorous way to say that, like which side of the famous butt crack, but as this article largely confronts the topic of ‘being classy’ I felt it inappropriate.

Kim K and her family tend to fall into the bracket of being a polarising celebrity. I know amongst my friendship group the split is thus….you’re either extremely fascinated or obsessed by them, or you think they are a complete waste of space, talentless and an embarrassing symbol of contemporary culture. However, I have always fallen somewhere in the middle with my opinion – I like to think that I am fairly open and non judgmental. I am more than happy to admit to watching their E reality shows (all million of them) and I have even stood up for them in various discussions revolving around their relevance, which have a tendency to turned heated, as people seem to be extremely passionate in their opinion, whatever end of the spectrum they reside.

Although there have been moments in the shows where Kim appears spoiled and self involved ( we all have personality traits we could work on), there are also numerous moments in the shows where she is clearly very sweet, extremely family orientated, and someone who really believes in true love. I have also always been incredibly impressed with her work ethic too. Now I know this is a tricky subject because many would argue that what they do should not be classed as work, and most definitely not worthy of rewarding them with the money and lifestyle they languish in. However, we are getting to a stage where even the most resistant need to adapt their views on what makes a career in 2016. If someone can make a living and career out of being just an Instagrammer (many do), then Kim, who has had clothing line, a successful app, a blog, released a single (to name a few things), we have to admit that what she does is legit. I will admit to struggling with the changing landscape of what is deemed a legitimate career path too, but living in denial is going to change much. It saddens me that the younger generation are growing up in a time where you are famous by association, a scandal, reality TV, having pretty Instagram selfies, etc, and not necessarily  talents, obvious achievement or working hard, and I detest that kids aspire to be a ‘celebrity’ when they get older. Like I said, ignoring it isn’t going to help….I digress.

She clearly has an almost unrivalled media savvyness too and an incredibly eye/ear for business opportunities and avenues to increase her empire. With her changing looks, her daring photoshoots, various ventures, feuds and so on she ensures she is a permanent fixture on and in  the most read blogs and newspapers. You can’t knock her for that. She is the master of this game. It’s not her fault that people in this era lap it all up and help to make her this living. She is just wise enough to capitalise on it.

She quite rightly pointed out in her essay that many people’s problem with her still stem from that leaked sex tape. I have to agree with her that 13 years on it is about time people got over that. I can only sympathies with someone who had a very intimate and private moment, unwittingly realised and viewed by millions. It’s not fair and the only person that should feel shame is the despicable person who leaked it. There is nothing wrong with someone who enjoys sex, embraces their sexuality and is proud of their body. My mantra is that if you’re not hurting anyone what you do in this department is up to you. Rather than let that awful incident destroy her, emotionally and in terms of her career, she instead used her new found fame to forge out career. Many of us would have lacked the gaul, resilience, tenacity and determination. Now on to the subject of being proud of your body, your naked body.

I can only be impressed and slightly envious of those so comfortable in their bare form. To put yourself out there in that way is something I can’t really associate with, but I almost marvel at it, as it’s so alien to my current relationship with my own. I also believe her when she says she feels liberated and empowered by these shots, which are pretty beautiful images to look( of course that is only my opinion). It’s also a positive thing for people to be expose viewing eyes to all sorts of body shapes, and she is renowned for fitting into the curvy bracket.

However the problem lies in the fact that not everyone viewing the images is equipped to translate them in a way that is helpful or wise. Her following is huge and varied, and covers all age groups. I can look at an image and process it in a thought out and educated manner, thanks in part to wisdom that comes with age, but also due to an awareness of how celebrities artfully play the media game. The nude shots don’t shock me, or effect me in a way that will influence how I represent myself on Instagram. However a young, vulnerable or impressionable girl, still learning about how the world works and how she feels about her body, or one looking for appreciation, acknowledgement or popularity may integrity and learn from the image in a potentially damaging way.

She will look at this stunning, likely edited image, and see the fuss it has caused, the amount of likes, and will notice how much it is being talked about. Is there a chance she will think that posting a naked picture is an easy way to get attention, to gain likes, to gain followers etc etc? Absolutely there is. Will she also compare her body to this smoothed out image…there’s definitely a possibility.

Many celebrities argue that they never set out to be role models, and yes I understand that, but unfortunately it does  come with the territory particularly when you have reached the scale of media domination a Kardashian has. So with that comes a responsibility. I’m not saying she shouldn’t post these nude or semi nude pictures, but I’d like to see a caption or reasoning alongside them that will back up her constantly reiterated reasonings behind posting them. Rather than saying you have nothing to wear, perhaps talk about what your beautiful body has achieved, how it has given you children, how you’ve looked after it with a healthy lifestyle, perhaps talk about how one should embrace their unique selves and have ownership of your/their body etc. Posting such frivolous shots, as if it’s not big deal. The fact that it isn’t shocking to many of us too, is a slightly worrying development. People are always trying to compete, overtake….the whole shock of the new thing. What are the children going to be able to access via Instagram and Twitter next? It’s extremely worrying to even ponder.

The moment that actually bothered me the most during all this was the tweet about money. I’m writing this on a plane so I can’t access the internet and quote it exactly. But basically she boasted about how much money she was checking while everyone was bashing her on the internet. This is the moment that I said to myself that I would not longer be defending Kim in this whole debacle. As I tweeted at the time, being a successful businesswoman is inspiring, boasting about how much money you have is not. It was tacky, thoughtless and lacked a lot of class.

What disappoints me most about Kim’s response to the celebrity tweets  damning her for the images is the glaring missed opportunity. Rather than reply with words clearly intended to throw shade or expose another’s flaw, she could have taken a moment to compose something that backed up her liberating reasoning for posting the Instagram shots. The Essay that came later was a better example, but by that point the damage was already done, and many people’s views of Kim had already been dimmed further. We’ve all acted on instinct and reflex on Twitter and alike. I know I’ve sent out a far few tweets that I still think about on those restless nights, one’s that lacked measured and controlled approach, the regrettable digs or statements posted in a moment of angst or anger. It was always always going to be ny on impossible to be victorious in a twitter spat with the legendary and notoriously quick witted Bette Midler, and to take aim at young Chloe Moretz, well it was misjudged.

Of course there has still be a certain level of victory for Kim, as me and about gazillion people are talking about her, again, and no doubt making her trend worldwide, again. At times where I have had to give her props for her media prowess, this time her approach was significantly flawed.

I guess what I want the leaving sentiment of this article to be is one that encourages intelligent debate. The world would be very dull if we were all always on the same page and agreed on everything, whether the subject matter be trivial or vital. Differing views lead to lively and interesting discussion, and potentially raising awareness of issues that need to be given a brighter or more regular spotlight. They results of the conversations/arguments can lead to a more enlightened society or the realisation of something that will help us progress or move forward in some way.

Kim, I agree that body body confidence should be appluaded and that we have the right to do what we want with our own bodies. But if we can use them do or say something beautiful, powerful, intelligent, well, why wouldn’t we? If I had a platform that big I know I would.