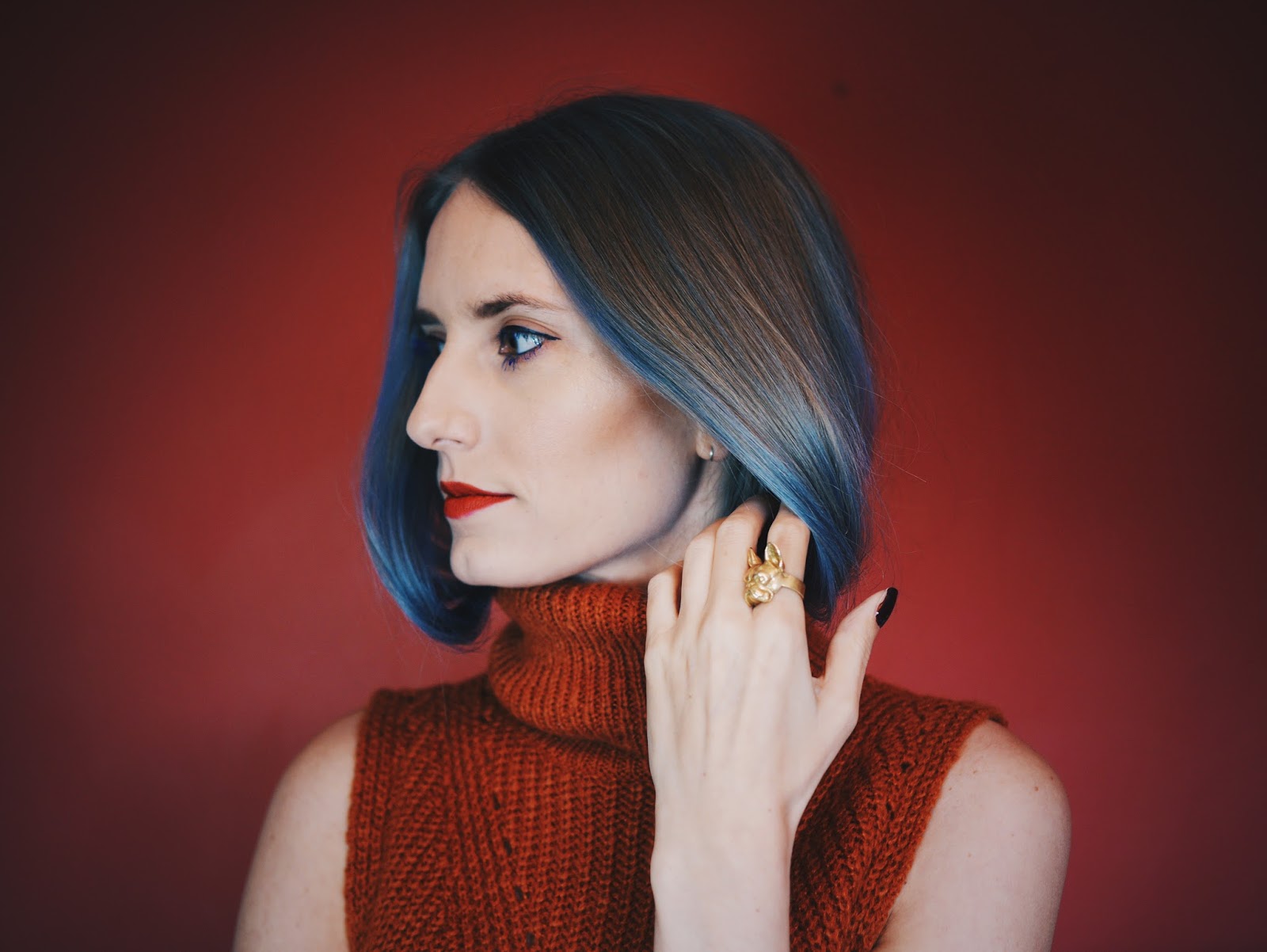 When the opportunity came for me long blonde hair to be transformed to an on-trend denim, I was obviously intrigued and excited by the prospect. That said, a large part of me felt anxious and fearful as I pressed reply on my email saying that I was up for doing it.

With every drastic hair change there is an element of risk, and as I have suffered at the hand of a hairstylist before, a traumatic event which resulted in losing a lot of inch of my hair due to bleach frazzling, I am perhaps more wary than most. As you will have read from various post denim posts I needn’t have worried in the care of Adam Reed, but in less expert hands you really are taking a leap of faith.

When I had to cut my hair short a few years ago due to a dodgy dip dye (I won’t name and shame the salon) I felt completely bereft. I felt at least 50% less attractive, and as someone that doesn’t consider themselves high on that scale, that was a drop I couldn’t really afford to have. It made me realize how much of my esteem and confidence lies in my hair.

I’ve very unremarkable on the looks front. I have no stand out features. My face is plain. I’m just run of the mill. Josephine average….you get what I’m saying. One thing I had and the one apsect of me  that would occasionly recieve complimentary comments was my hair. For some reason I have always been able to grow it long, which I know it something not everyone can do…hence all the potions and supplements on the markets promoted for their growth enhancing qualities.

As I’ve said before my hair has also been a comfort blanket of sorts. When I’m suffering one of my allergic reaction rashes, or struggling with a serious acne breakout, I’d use my mane as veil to mask, or at least dilute the drama of the markings.

So as I said before, when I was forced to cut my hair I didn’t feel good about myself…and I also just didn’t feel like myself. I realised that I had been relying too much on my hair. Investing too much of my identity and esteem into these odd strands of fibre that come out of my skull.

Very odd when you think about it like that. 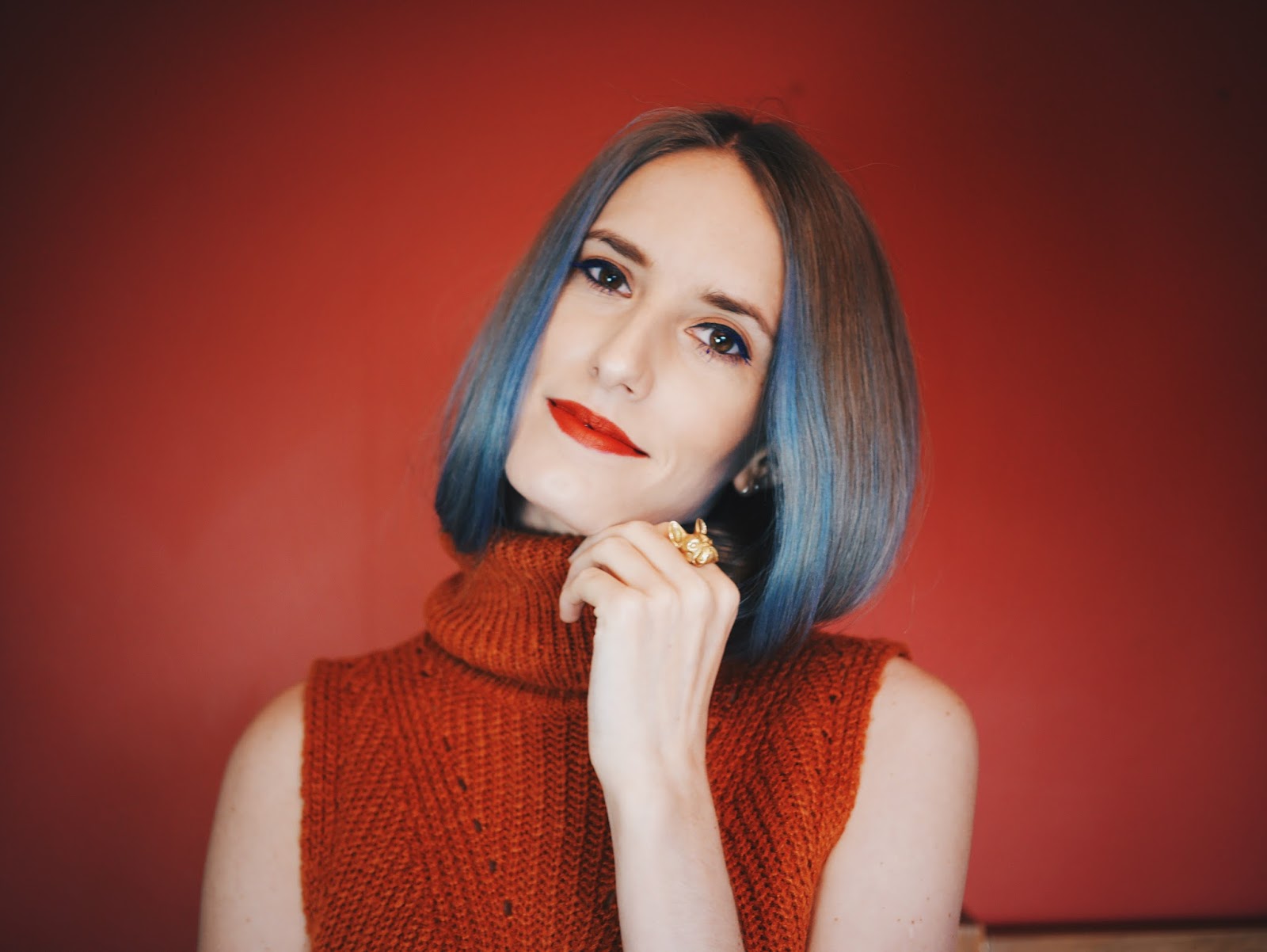 When I started to ponder this realisation in depth, I realised what a risky and potentionally dangerous thing this is to do.

I’m from a family that has suffered numerous times at the cruel hands of cancer. I’ve known people going through treatment and the resulting hair loss. I’ve also known people with alopecia, and even suffered my own hair loss during an intense period of stress.

We don’t know what the future has planned for us and what expected or unexpected traumas, hiccups, difficulties may arise. We can’t ever fuly prepare ourselves for the spanners that appears in the works, but I do want to try and make sure I have my prioities sorted and try to get myself in a place where I am more focused on the important aspects of what it is to be a human. Essentially finding my self worth in other things less superficial. 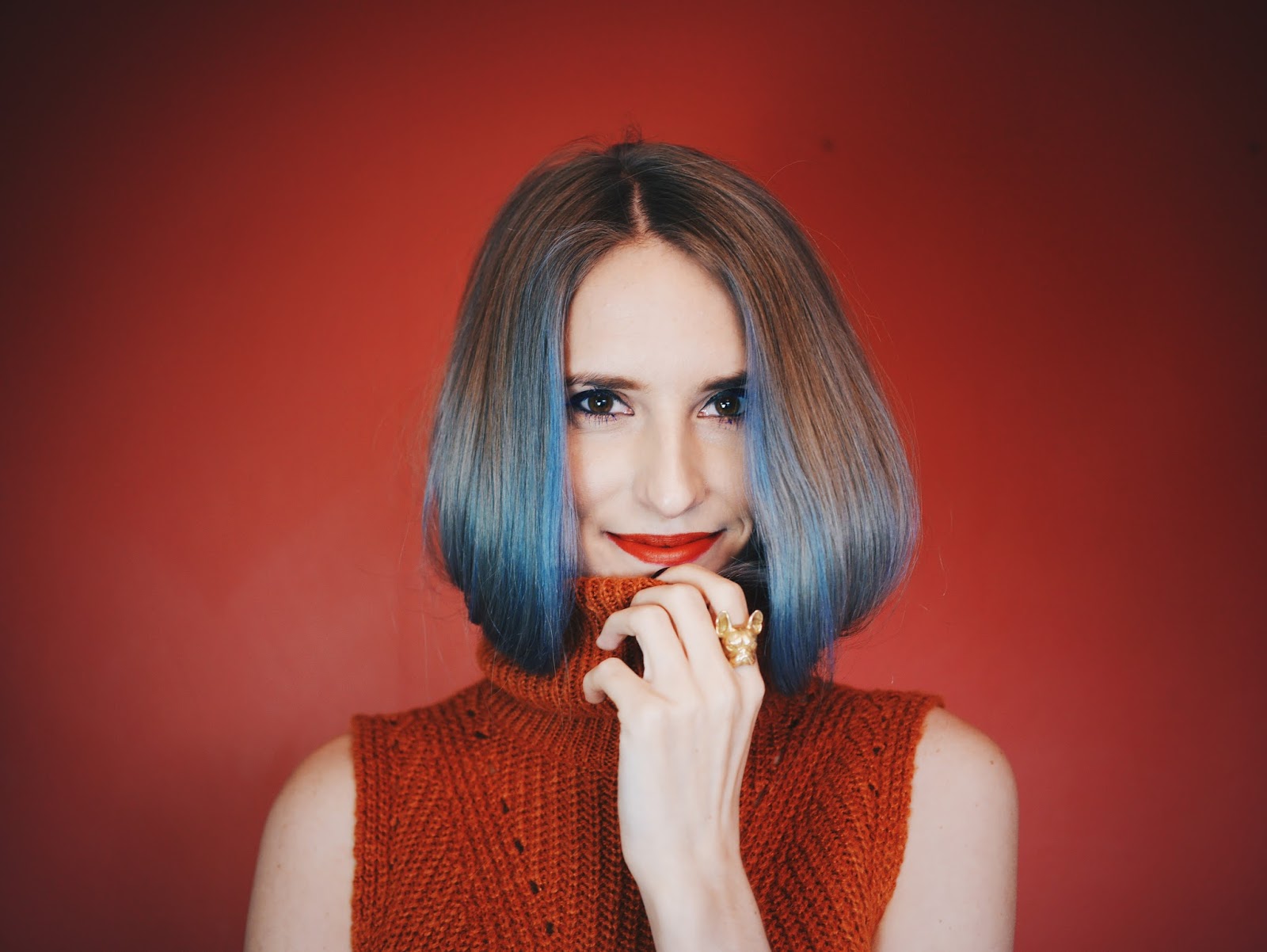 Transferring these notions to my work life… I don’t want my blog or YouTube to be solely focused on looks or the superficial. Not, that’s not quite right…what I mean is, I don’t want it to be focosed on my looks. I’m not saying I wouldn’t have a channel dedicated to beauty/make up/fashion…in fact I think YouTube needs these sorts of channels because escapism is SO important in this stressful world we live in (in fact I hardly ever watch the sort of content I make, I’m always looking for fun/silly/mundane videos).

There are a lot of YouTubers and Bloggers that have carved a huge following because people love the way they look. People love their style. Perhaps they are really great at doing their make up. Perhaps they look great in crop tops. Maybe they have super cool coloured hair or extremely long hair. On Instagram in particular you don’t even have be a blogger in the traditional sense (many don’t have blogs or write anything), but you can create a career just out of posting pictures of yourself. Us girls love to look at other girls – what they’re wearing, what their house is like, how they’ve done their hair, how the look in a bikini, what they’e buying. Sometimes we even follow accounts that are just selfie after selfie. I don’t whether we enjoy that combination of the feelings of jealousy and aspiration, or whether we just like looking at things we deem ‘pretty’ or ‘cool’. It’s a weird phenomneom. 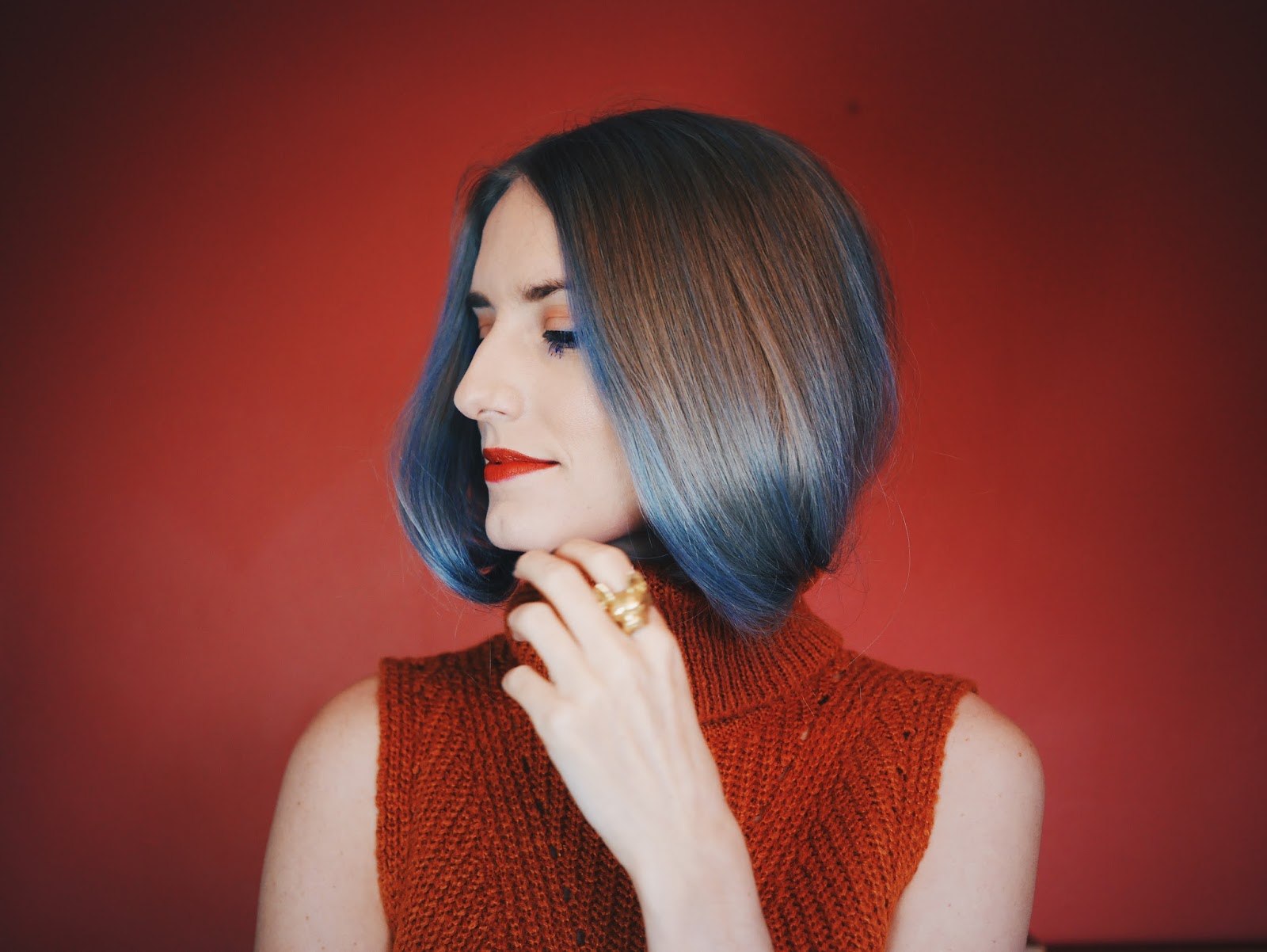 I find myself worrying about these types on bloggers though. Although I’m sure many have other jobs and goals on the side, and this is merely a lovely side project/bonus of being attractive, I do worry what happens when they age or if their looks are effected in some way. If their looks were not considered aspirational anymore, have they instilled enough of their personality into their posts that people would stick around? 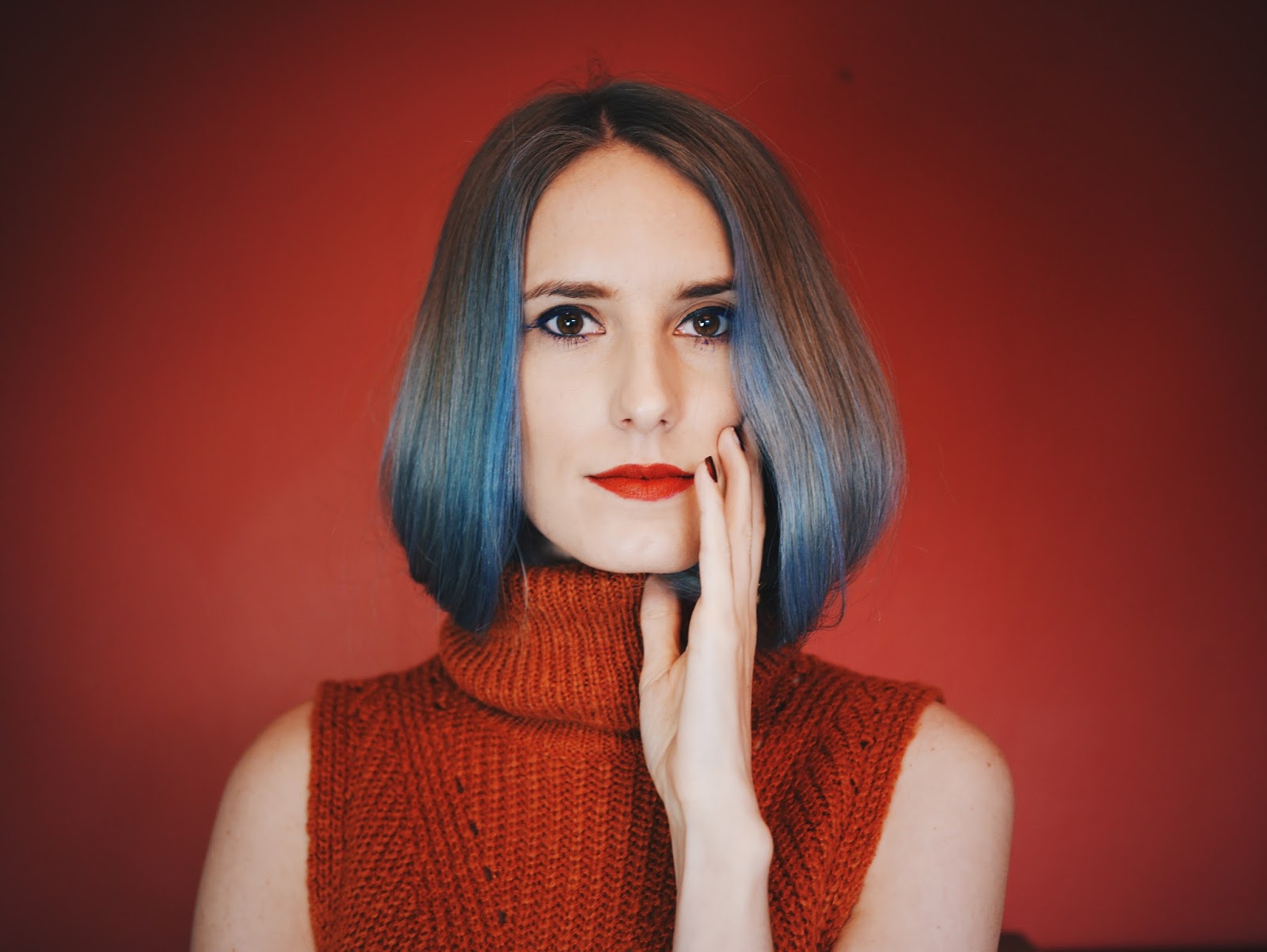 When I went Denim I saw a slew of new people follow me on Instagram and YouTube. Of coure as someone trying to build my channel/following this was great. But I couldn’t help but wonder whether they would quickly disappear as my hair dye faded.

It made me realise that I’d much people follow me because they like what I’ve got to say, my personality….rather than current look ( particularly as someone who is getting more haggared by the day).

But this is a tricky conundrum for a YouTuber or Blogger. I should be doing all I can to grow and build my audience, and I do know what I need to look like and the content I need to do to acheive this. But, I also don’t want my behaviour, style, content to be dictated by my ambition to be a successful YouTuber/Blogger. Essentially I’m cutting my nose off to spite by face…but I’m hoping I’ll be comforted by knowing I’m staying true. I’ve kind of veered away form my original point here…but I just wanted to briefly delve into how your image can have an effect on your popularity on the likes on Instagram and YouTube. 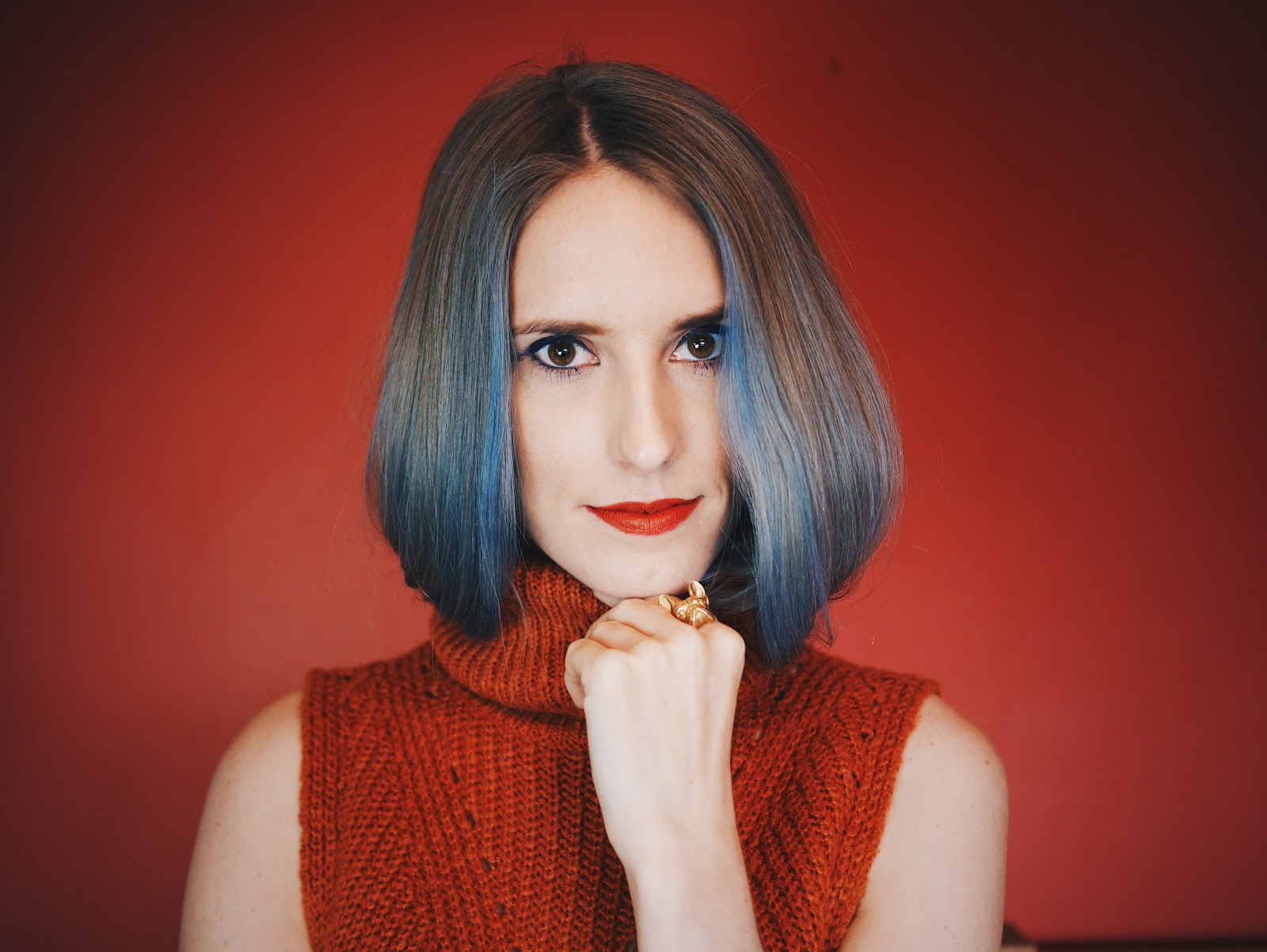 In daring to go for denim I felt like I was free’d from my shackles. For a bit I wouldn’t be described as ‘you know, the Sophie with the long blonde hair’. Okay, maybe I wouldn’t be described as Sophie the one that’s true to herself and writes about stuff she’s passionate about, but for a little bit I might be the ‘Sophie, with the denim hair’. Just having a change means you can step out of routine, be out of your comfort zone, and there a lot to be said about putting yourself in new situations. I’ve always loved that I can blend in to a crowd and be invisble, I hate to be the centre of attention. Having blue hair did mean I was far more noticeable, which was terrifying and took a bit of getting used to. I think it probably did me some good though. I found myself  having to fake confidence and coolness to try and pull of my new look. You know what they say…fake it till you make it.

When I was taking shots of my new blue look, I tucked it into my polo neck to create a faux bob. After being gutsy and dying my hair blue, I now felt far less stressed about the mere idea of cutting my hair short. I don’t think I’m ready for the leap just yet, but It doesn’t feel nearly as horrendous an idea as before.

I guess what I’m saying is… Let’s not put so much importantce and emphasis on our looks, I know I don’t want my looks to have such a hold over my level of esteem. Easier said than done, and I’m probably only one percent there, but let’s allow ourselves to have fun with our looks, and let what we do and say do the real talking!