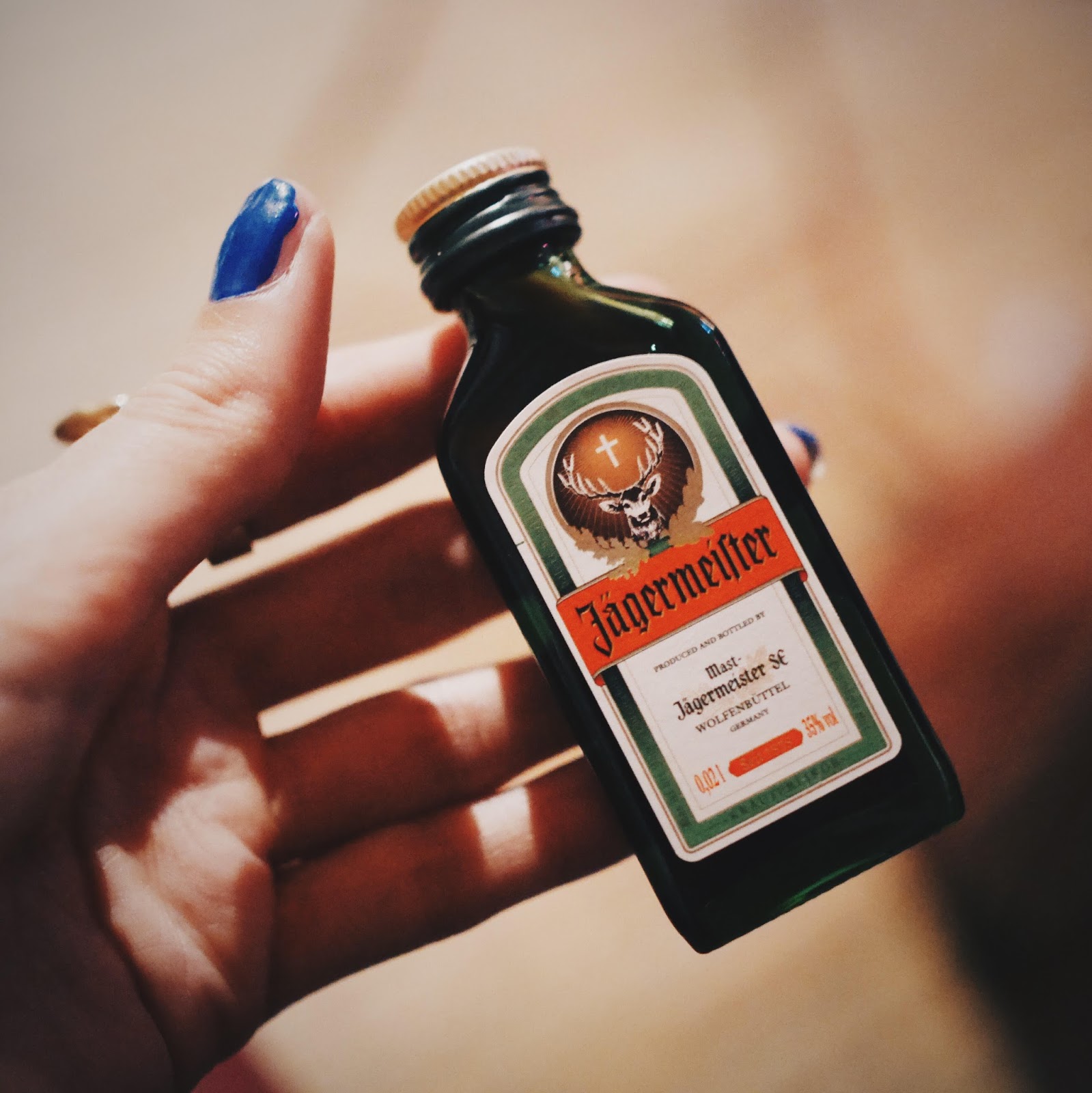 Last Monday I was invited down to The Forge in Camden for an exclusive screening of Jagermeister’s latest extreme musical performance starring Matt Tuck of Bullet for my Valentine.

Before you watch my chat with the frontman, I’ll just give you some info about the lengths he and the Jagermeister team went to to accomplish this world first gig…..

March – Tromsø, Norway 2016 – Jägermeister accomplished a world first by producing a thrilling continuous
gig on air, sea and land, featuring Matt
Tuck – lead singer of multi-award winning British heavy metal band, Bullet for My Valentine,achieving top ten
hits across the world including the US,
UK, across Europe and Australia. The adrenalin-filled gig, which marked the
fifth and most extreme chapter in Jägermeister’s Ice Cold Gig series, took
place amidst (and above) the Lyngsfjord region, near Tromsø, in the stunning
setting of North Norway, 192 miles north of the Arctic Circle.

Jägermeister, the iconic German herbal
spirit renowned for pushing the limits in the music world, invited the Bullet
for My Valentine frontman, who has been part of the JägerMusic programme for
years, to perform in this exhilarating world first attempt. The epic event encompasses
three elements – never before associated with one continuous gig.

Matt and his unsuspecting audience of
three loyal friends – completely oblivious to the adventure ahead until
arriving at the dropzone – ascended to 15,000 feet above the stunning Lyngsfjord
in a Eurocopter AS350 helicopter, set to start the show of a lifetime and truly
test the bonds of friendship. Each paired with a specially trained instructor,
Jägermeister’s 2016 Ice Cold Gig started in freezing freefall with the band
launched into the brutal -30 Norwegian air. After the icy and swift free-fall
and with canopy opened at 7000 feet, Matt grabbed his guitar playing the first
song of the gig, The Last Fight, recorded on Zaxcom receivers for his floating
audience, listening in on Sennheiser G3 headphones; a unique moment in music
history. 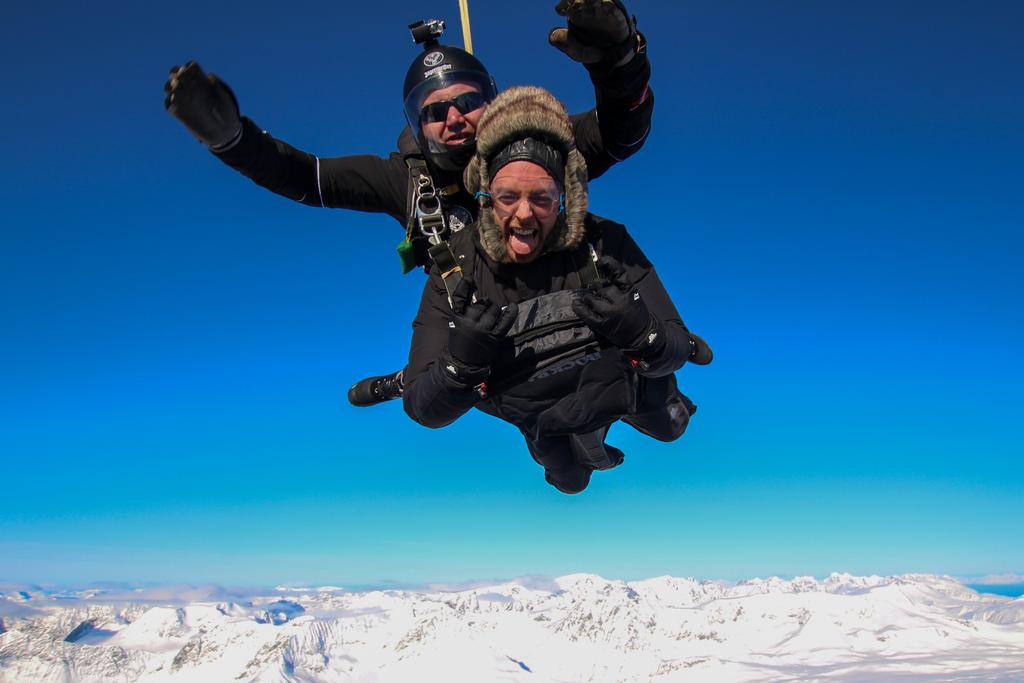 Stage two of the Ice Cold Gig saw
Matt and his mates whisked across the tranquil Lyngsfjord they had plummeted
towards moments before, in a Buster Magnum speed boat. With wind chill factored in at -20 the
challenge for Matt to sing and play the guitar was very real, yet spirits
remained high with Matt wanting to put on a show deserving of his closest friends,
who all sang along to Matt’s second song of the gig, Venom, the title track of Bullet
for My Valentine’s phenomenally successful latest album which topped charts across
the globe, and hit number 3 in the UK. 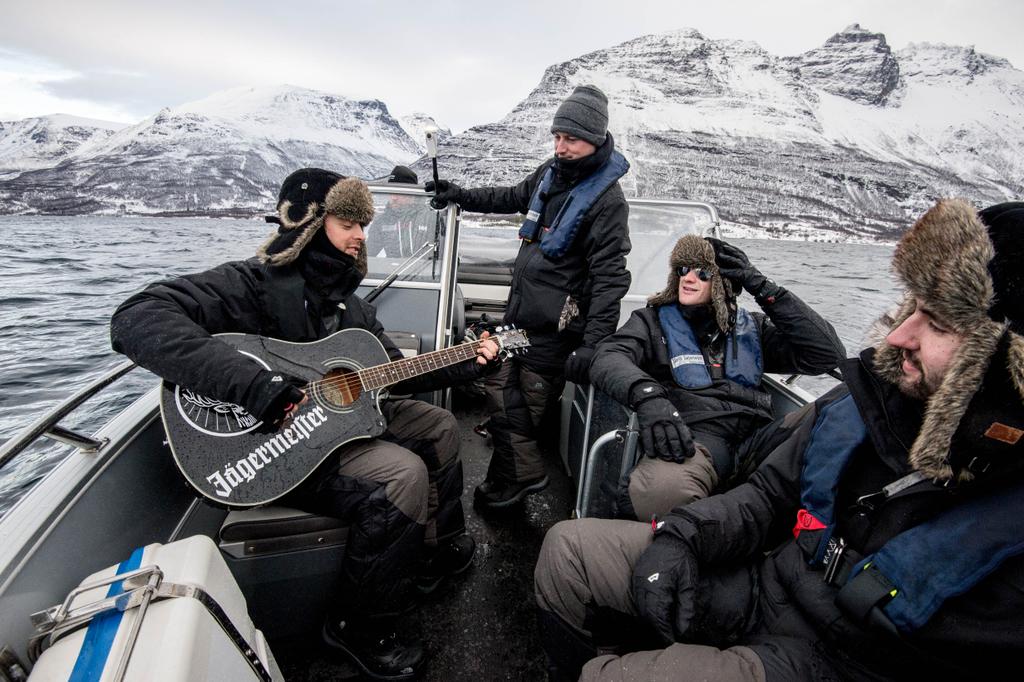 When the quartet arrived back on land
they were led by Siberian huskies through the glistening Norwegian snow towards
the Gukkesgaissa Mountains with Matt playing his 2010 classic Bittersweet
Memories. Ushering his crew back to a traditional Norwegian Sami camp, the
friends gathered alongside enthusiastic locals (including a couple of reindeer)
– and, toasting to friendship and a world’s first in music; air, sea and land, celebrated
with a well-deserved ice cold shot of Jägermeister.

After the gig, frontman Matt Tuck said:
“I’ve played some incredible gigs around the world, but that was right up there,
literally. Jäger’s Ice Cold Gig was one of the very best and definitely the most
extreme! It’s my first skydiving experience, so dealing with the excitement and
nerves – even before you add in the ruthless cold – was intense, but totally
worth it. It’s awesome to say you did a world’s first in music, but to do it
with my best mates, the guys who were there with me from the beginning, made it
unforgettable. Now for a drink!” 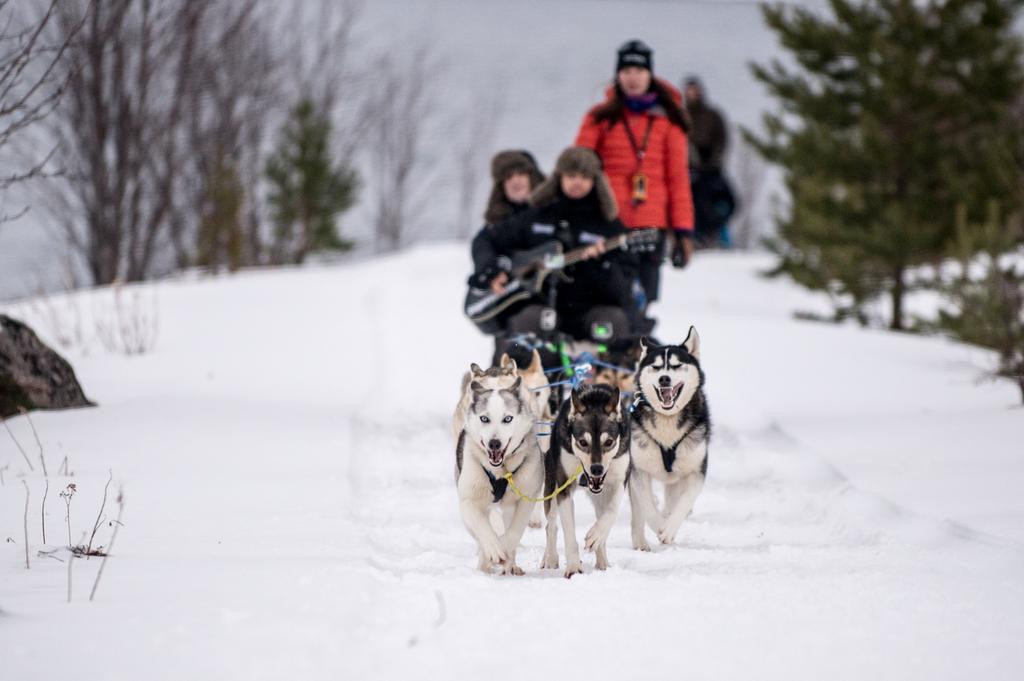 In the Ice Cold Gig series, there’s
no obstacle too big for Jägermeister to overcome. Jägermeister’s 2015 Ice Cold
Gig saw UK progressive rock band TesseracT
perform on top of an immense gigantic igloo, thought to be the world’s biggest,
spanning the equivalent of 3.5 double decker buses in Ylläs Village in Lapland,
Finland.

In 2014, Jägermeister hosted the world’s first gig on an
iceberg with UK metal band The
Defiled. The band performed a special set to a host of locals from the
nearby town of Kulusuk Greenland, who ventured out to the ice field to watch
this once-in-a-lifetime experience from an array of fishing boats and leisure
craft.

Tom Carson, Jägermeister UK music
manager added: ‘We go bigger every year and because of the nature of this world first,
spanning air, sea and land, in extreme conditions, this gig was not only a test
of friendship but one of supporting each other too. I think they had a great
laugh.The Ice Cold Gigs
have become such a prominent feature for our JägerMusic programme and this year
we really wanted to celebrate musicians giving back to the people who supported
them from the very start; typically their best friends’.

Like Jägermeister’s 85 year old
secret recipe, plans like these do not come about overnight. The mammoth
challenge of putting this incredible tribute to friendship together fell to
Secret Compass, a professional expedition company whose Brand Projects team is
adept at conceptualising and delivering multi-platform media projects of this
nature in the world’s wildest places. Faced with extreme modes of transport,
freezing temperatures, high winds and rock stars, the team utilised strategic
planning, the latest high tech equipment and sheer human endurance to capture the
essence of the project.

Tom McShane, Operations Director,
Secret Compass commented: “From having to film from helicopters, skydiving,
speedboats to huskies, this project was mammoth in the extreme. From looking
after all the filming and audio kit in freezing temperatures, to co-ordinating
the permissions to run a really complex project, and getting the logistics in
place has been challenging to say the least, but like Jägermeister, we revel in
breaking boundaries.’ 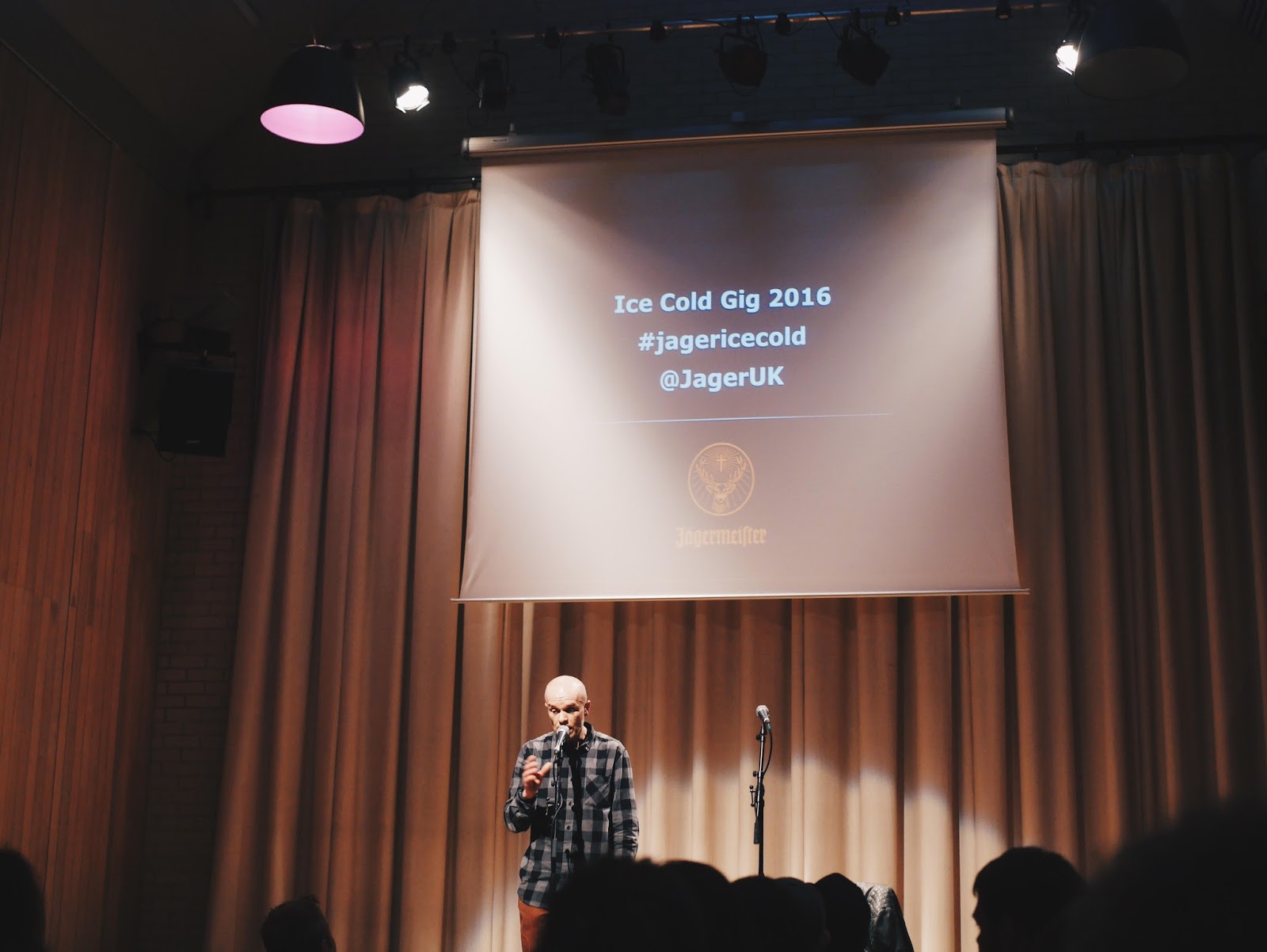 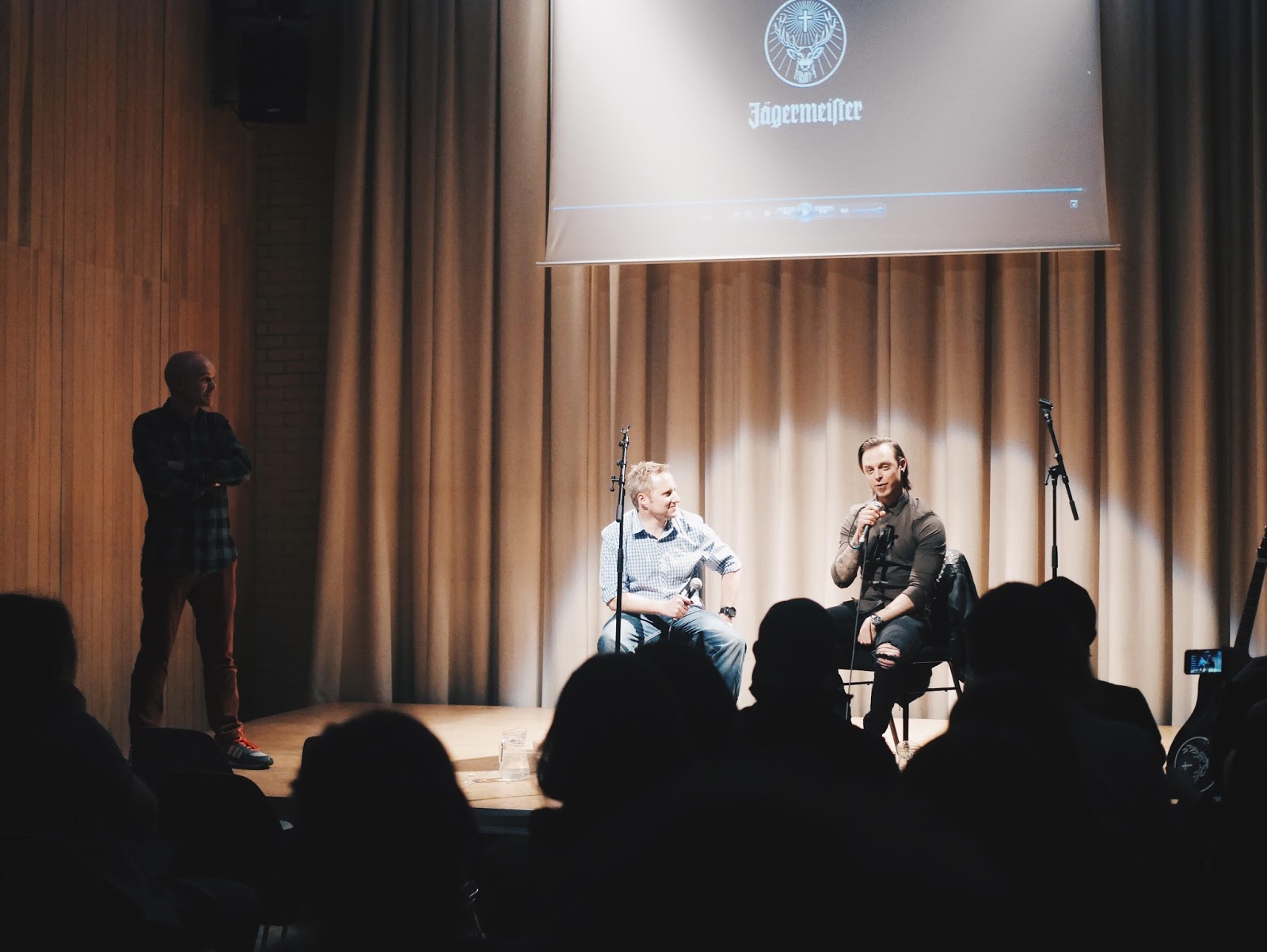 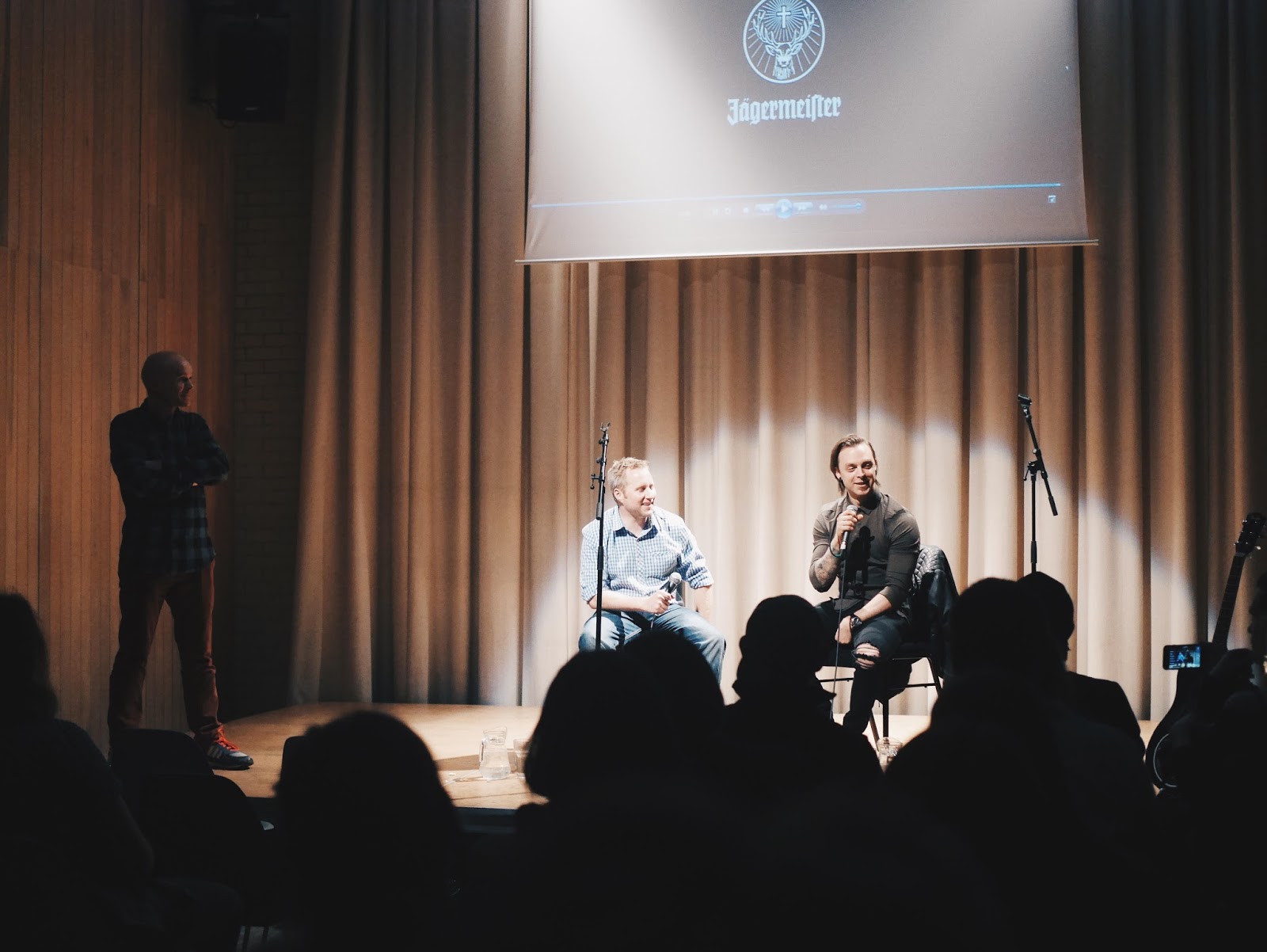 Thank you to Tom Reast for arranging the chat with Matt.