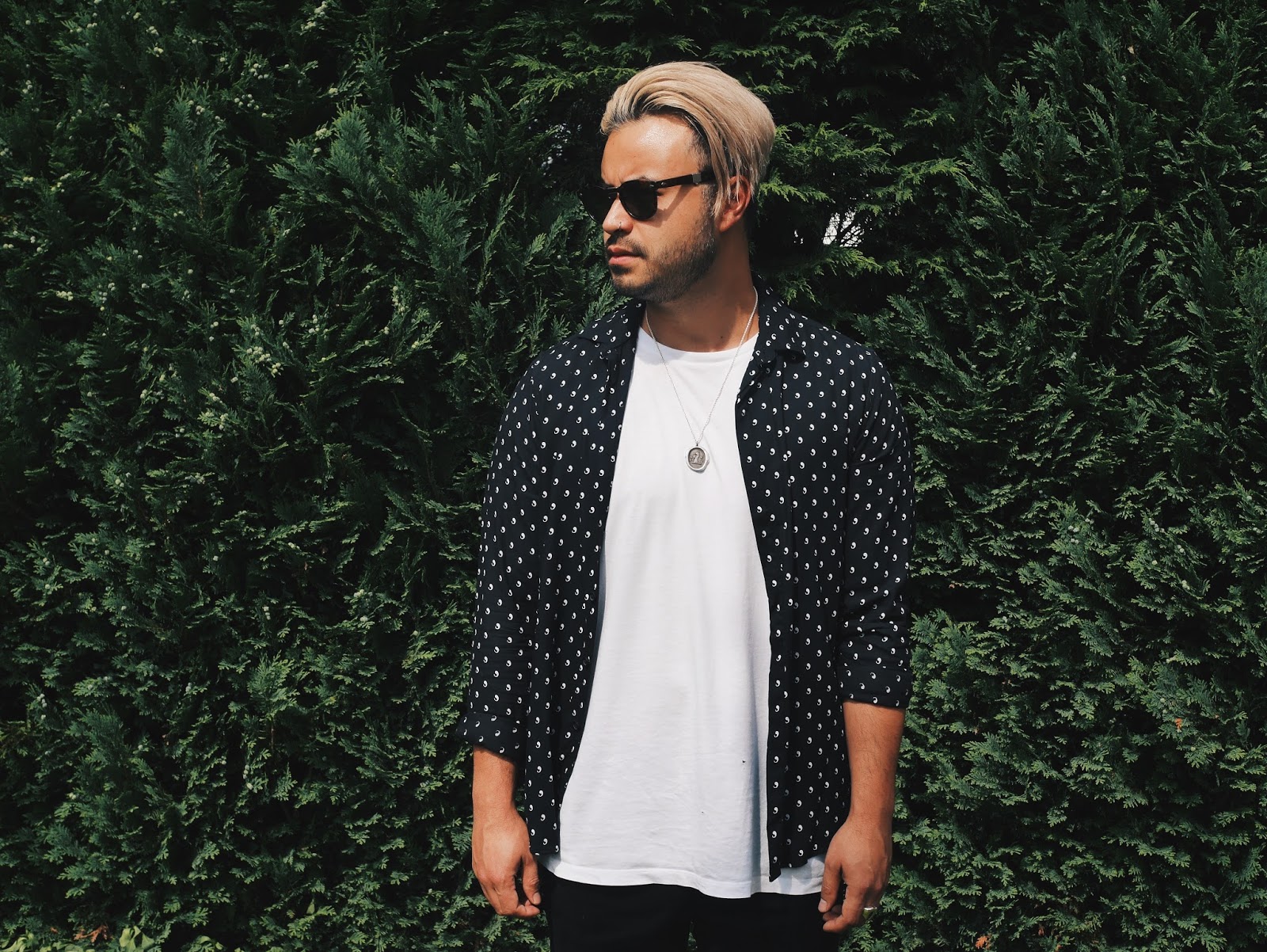 So last Thursday was the Kerrang! Awards….how is it that time of year again?  For the last four years I have been on the black carpet interviewing the artists on their way in, as well as after they’ve receieved their awards, and then enjoying a bit of the after-party before realising that bed is far more appealing than trying to avoid embarrassing myself in front of bands I do and don’t know.

This year I didn’t attend as Relentless are no longer the sponsors, and I have always been kindly invited by them to carry our press duties. It was fine though because Si wasn’t due to be going either so we were looking forward to a stress free Thursday in our slouchwear at home…catching up on Bloodlines or something or rather on Netflix. Then Si gets a Whatsapp telling him that he’s now going. So as well as foiling our chill plans we now had not very long to make sure Si was looking slick and sharp for his night at one of the biggest music parties of the year. I had a last minute scram to see if I could wangle a pass so I could enjoy the night with him too, but to no avail. Probably a blessing as I had absolutely nothing to wear!

Si wasn’t performing, getting up on stage, or nominated this time round, so there was no need to go full pelt when it came to his outfit, but he did want to look a bit different to ‘everyday Si.’ Seeing that he may be on the cusp of a flap, I asked if he’d like me to sort his outfit out.

Many moons ago I used to work as a stylist and stylist assistant. I gave it up for many reasons. Not being based in London made it tricky because I’d have to personally pick up and drop back all the samples at the shops and PR offices. When you work at a mag in London or have a budget, you generally use couriers to do this, but instead I was lugging multiple suitcases and suit bags around the city. Thisis tiring for any human, let alone one with a fatigue illness. I also got very tired of the treatment I got as a stylist assistant at times. Getting treated or spoken to in an unfair and belittling manner when you are getting barely anyn money became something I wasn’t willing to put up with. This wasn’t always the case of course, but I certainly did work for a few stylists who were on the slightly difficult end of the spectrum. I remember one time a photographer came to my defense and told the stylist to stop going all Devil Wears Prada on me.

In the last few years I’ve helped on a few shoots for Cheer Up Clothing,  a few people with the odd bit of styling or gifting and my friends enlist me as their personal shopper, but that’s as far as it goes.

I’ve worked on a couple menswear shoots in my time, one for 125 magazine and another for an NME cover, and I actually enjoyed it just as much as the female shoots, so I was rather pleased that Si gave me permission to dress him up for his night at the Kerrang! Awards. 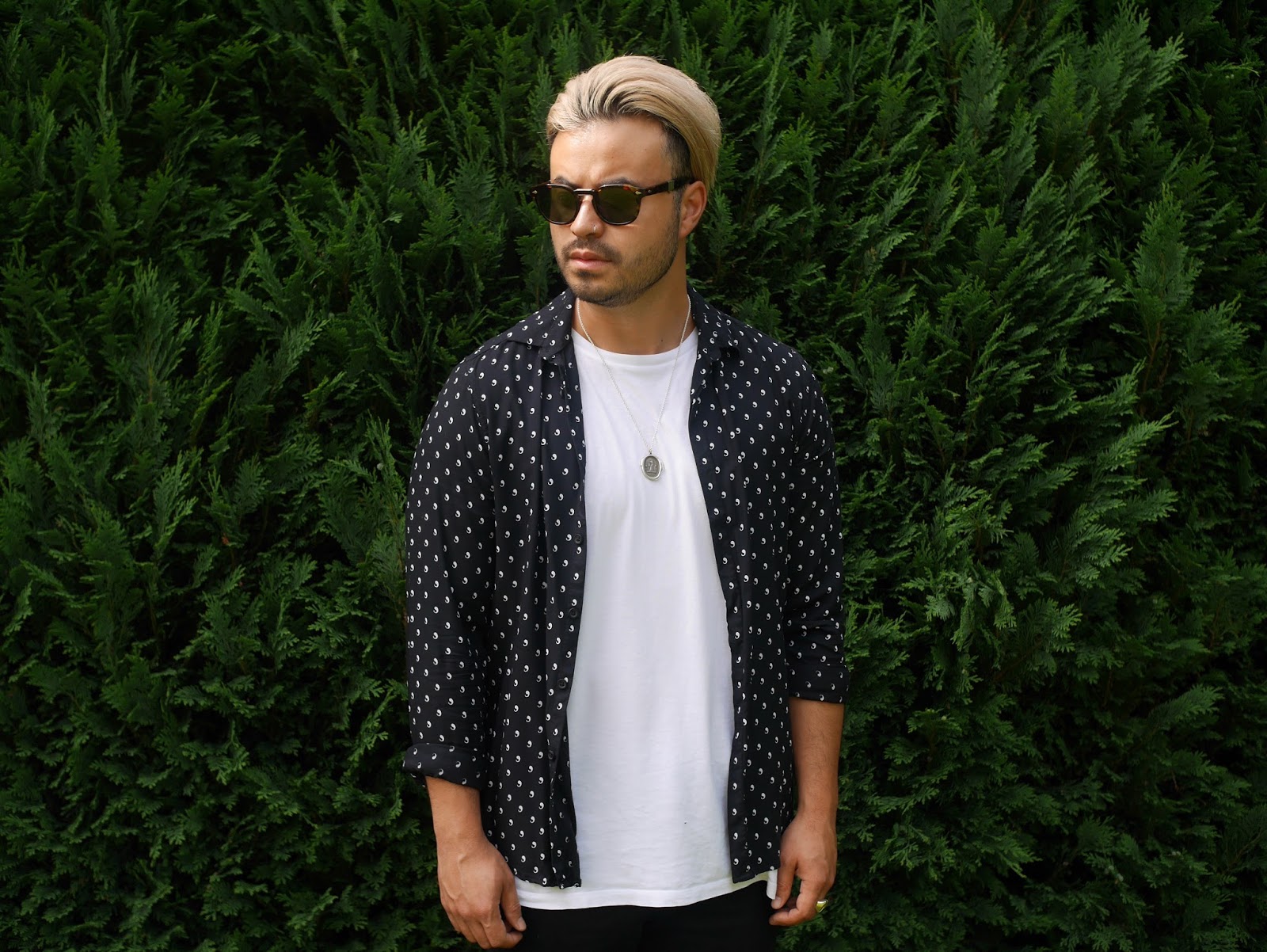 Another element that made it slightly tricky is the fact that Si gnerally lives out of a suitcase, so he only had a small chunk of his warbrobe at my house for me to choose from. It was also really uncomfortably muggy, so he didn’t want to feel too penned in by what he was going to wear or be too jacketed up. It’s a shame because a cool statement jacket is an awesome way to make an impact at an event like this, but it just wasn’t practical. He did bring a Black denim jacket with him though which did look cool layered over the shirt.

The thing you keep in mind when dressing for an event like this is, that although its a prestigious awards event held in the evening, it’s still going to be filled with people from the rock world. So it’s that balance of kind of looking like you’ve made an effort, but not looking like you’ve tried too make to make an effort. Well, that’s the approach if you care what people think, and dress to please others. Obviously, ideally you’d wear whatever you bloody well like as long as it makes you feel as wonderful as possible! 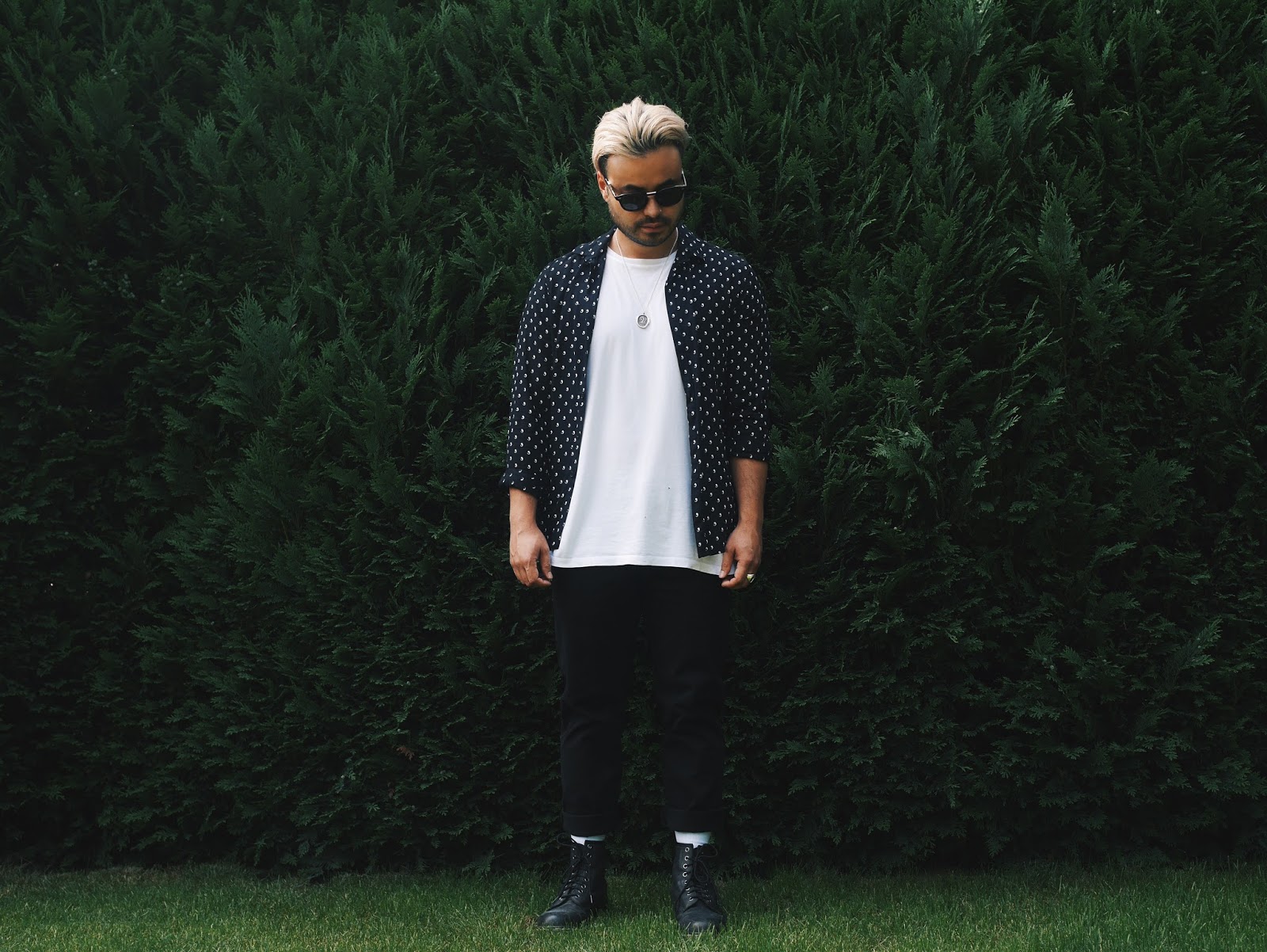 The shirt, which we have named the sperm shirt, is a purchase from ASOS last season. Long gone is the rule about wearing black and navy together. In fact, in recent years we’ve even been encouraged to team these moody colours together.  It’s hard to tell in this picture but it’s a really nice thin, slightly silky fabric, so it looks slightly dressier than the average day shirt. We did originally have it done up to the top but realised the look needed a flash of light, which popping the t-shirt underneath delivered. 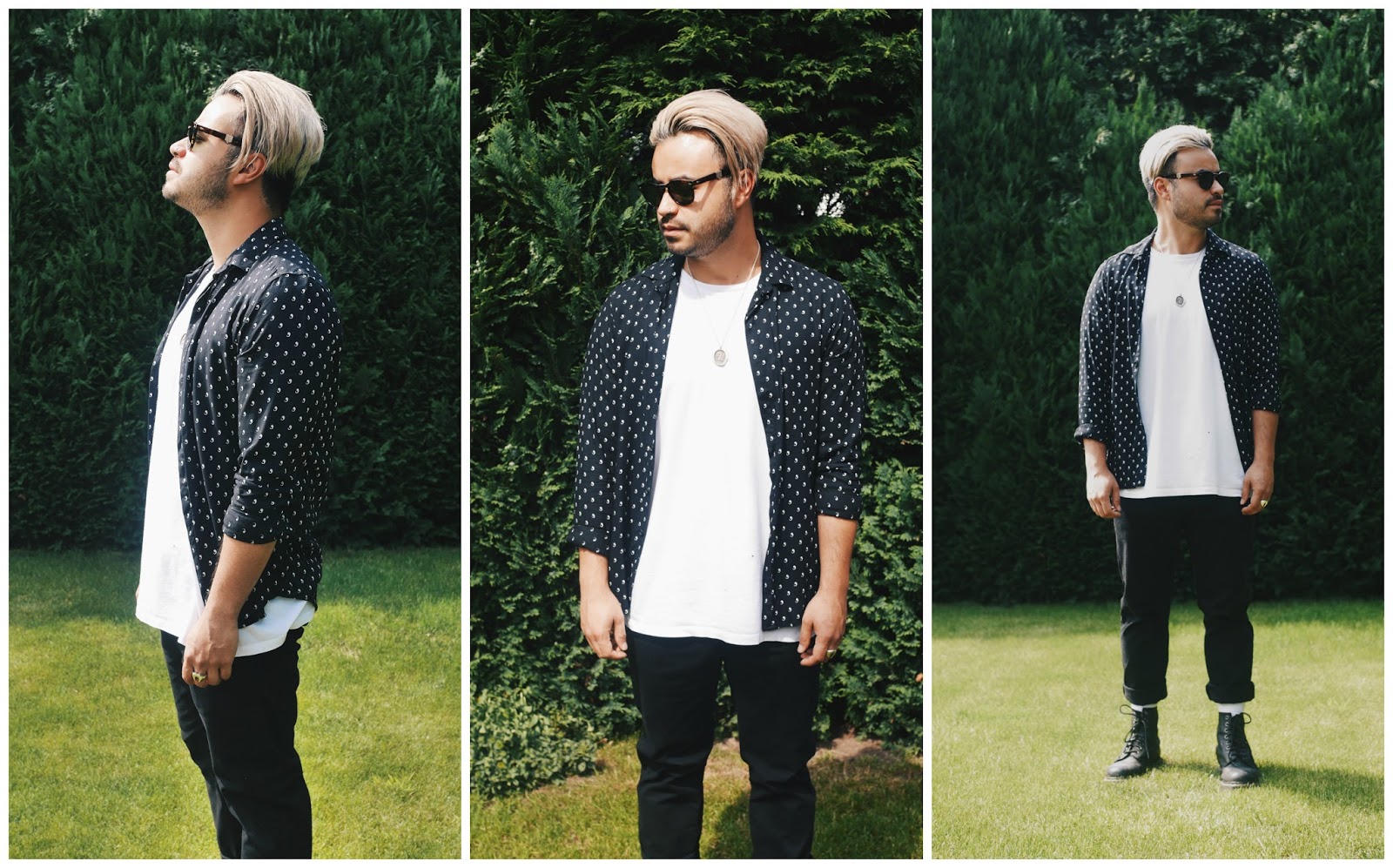 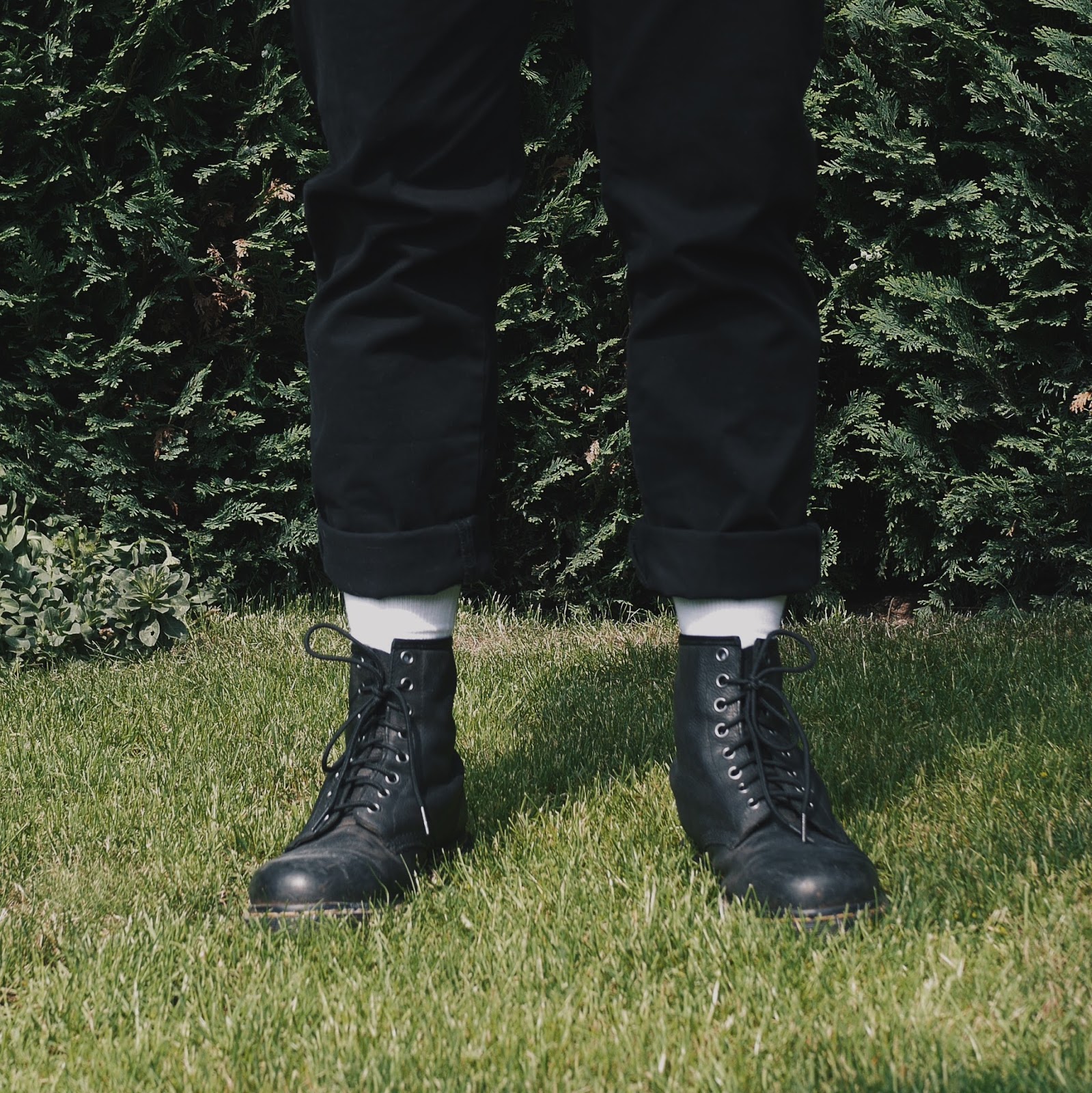 A classic rock/alt staple, the Dr.Martens boot. I prefer them once they’ve softened and look as if they  they’ve been lived in – they kinds look like they belong on that person then, rather than being bought in an attempt to look edgy.  Lately Si has been veering away from the look sported by emo bands and many of their fans, and  has been feeling more comfrotable emulating looks more commonly seen pn hardcore band members or  the likes of Deftones. Skinny jeans are out, instead a baggy, slouchier fit trousers – workman style or a chino. I guess it’s more inspired by the brands loved by skaters and bmx-ers, like Carhaart and Dickies. I used to wear these trousers as a teenager, and I’m fully embracing the resurgence. These black ones are from Topman, and we pruchased some beige ones in the same shopping trip which look awesome teamed with simple plain black or white tees. 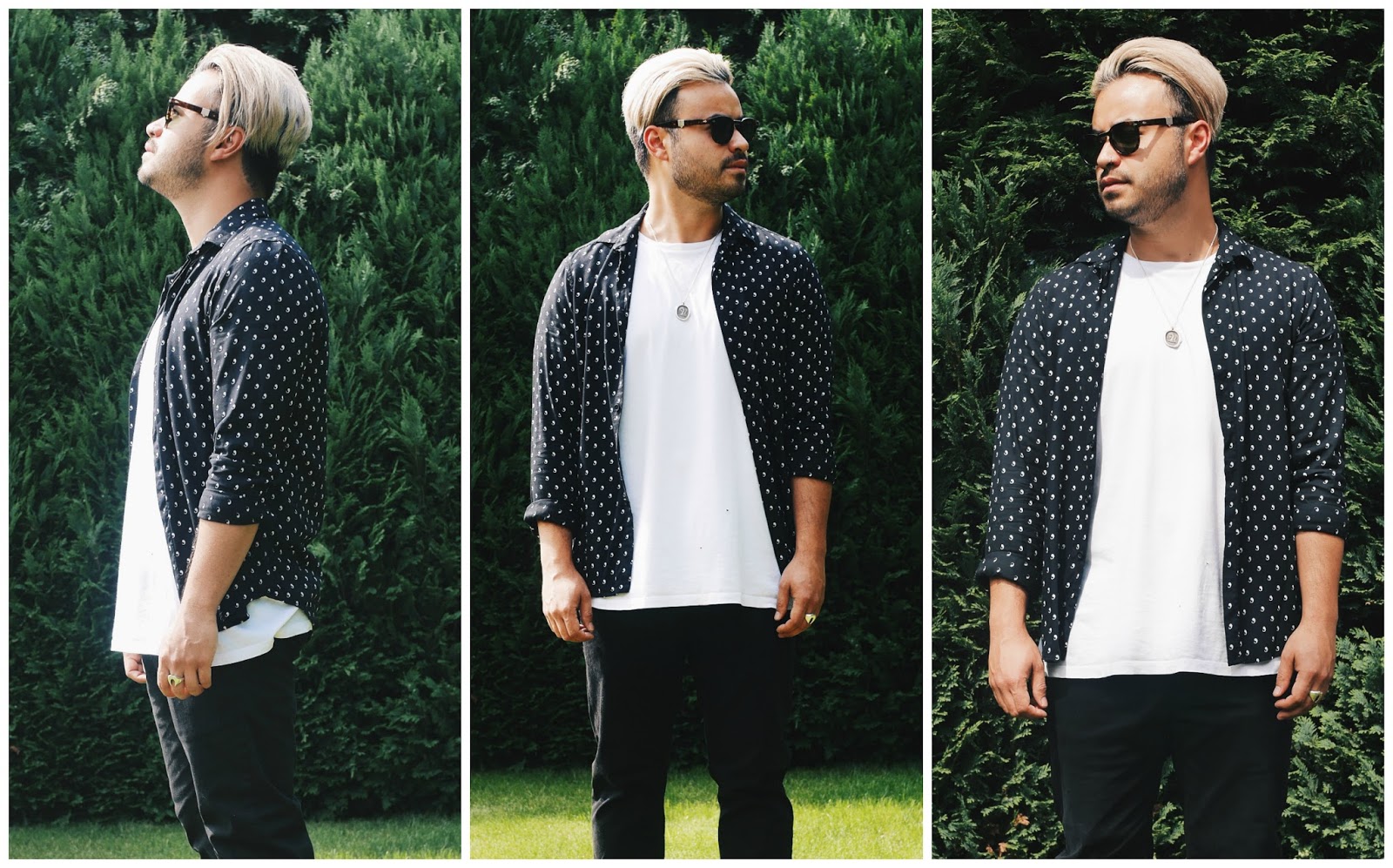 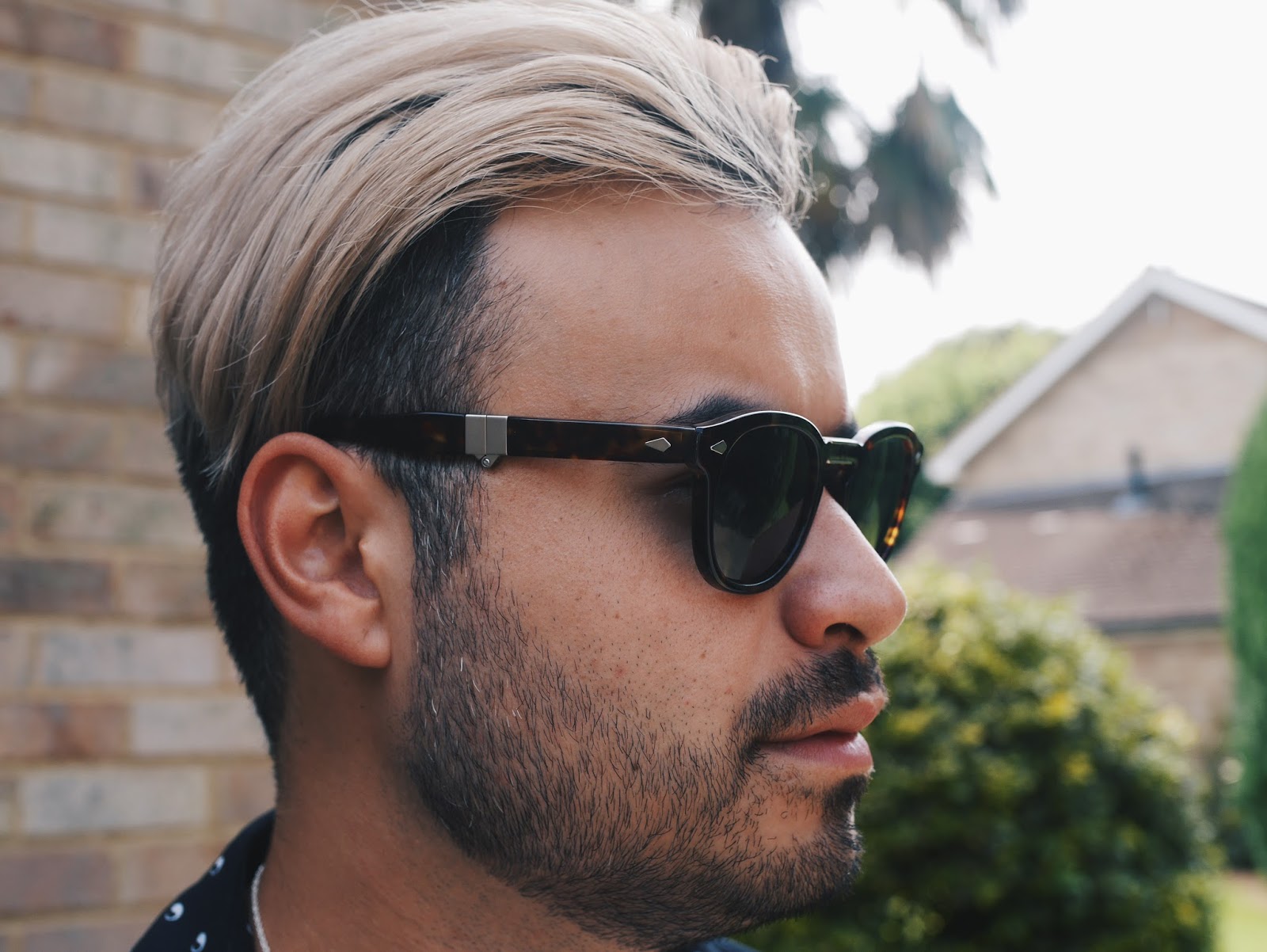 Si was kindly gifted these lovely shades from the guys at MOSCOT. They visited their store while they were in New York recording their new album, but the brand have a great little shop on Soho too  if that’s a bit handier. The natty thing about these tortoiseshell numbers is that the arms are hinged so they can be folded into a very compact little box – perfect for those that like to travel cleverly. 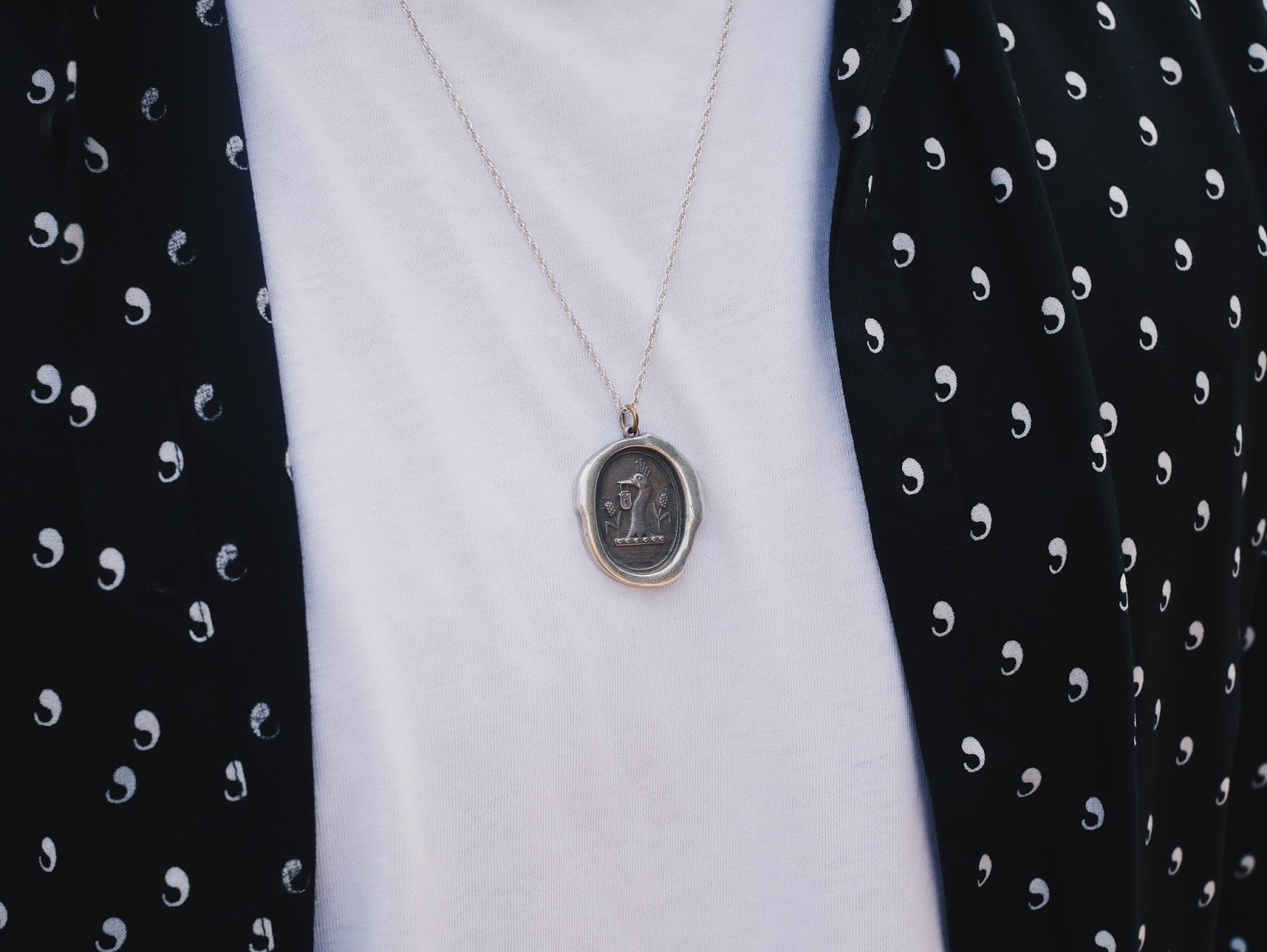 This necklace comes from a brand created by Proudlock from Made in Chelsea. Don’t let the fact that he was part of a reality show put you off, he has a great eye for style and the site is full of extremely cool menswear fashion and accessories. 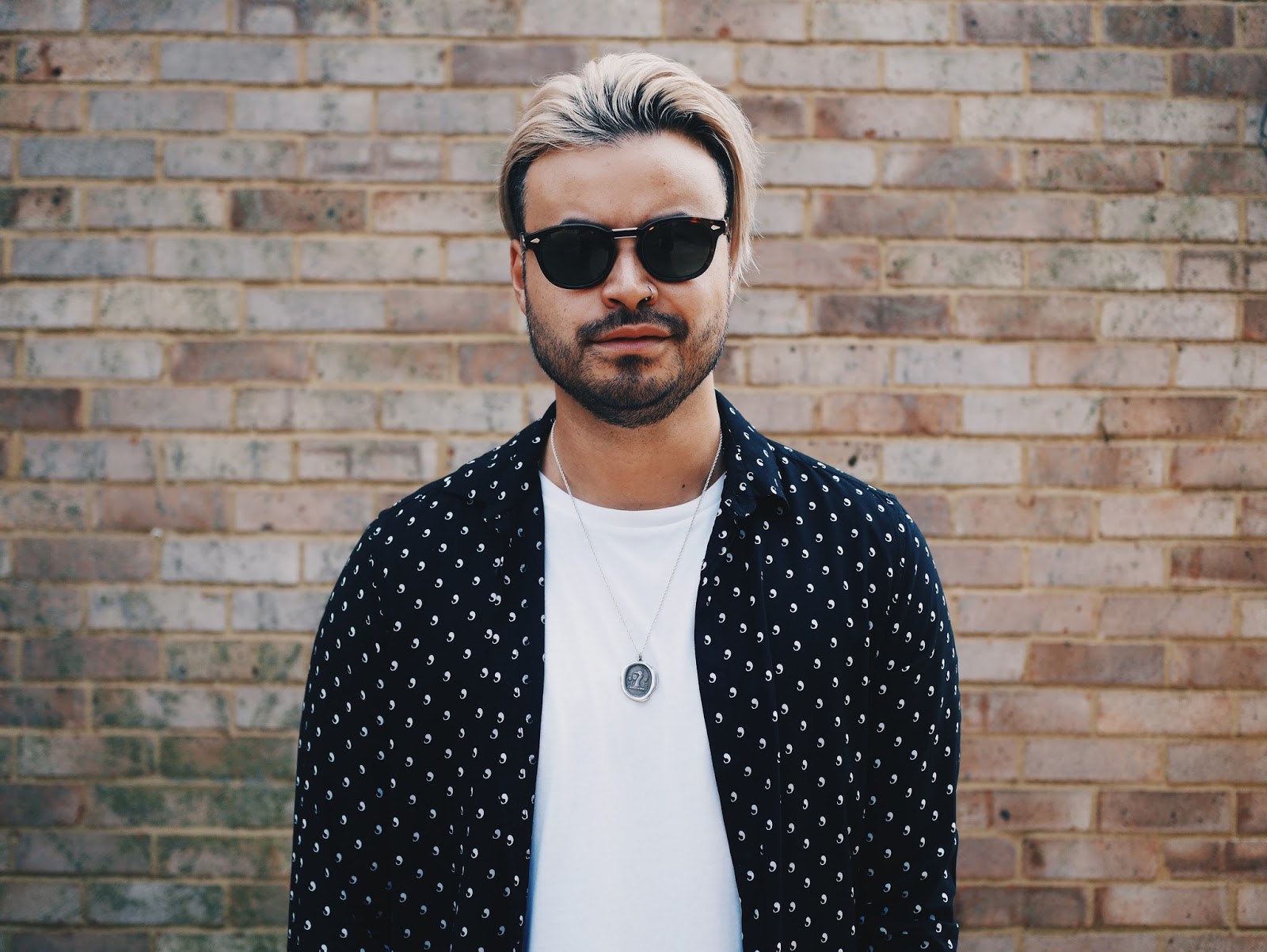 What do you think of Si’s look?