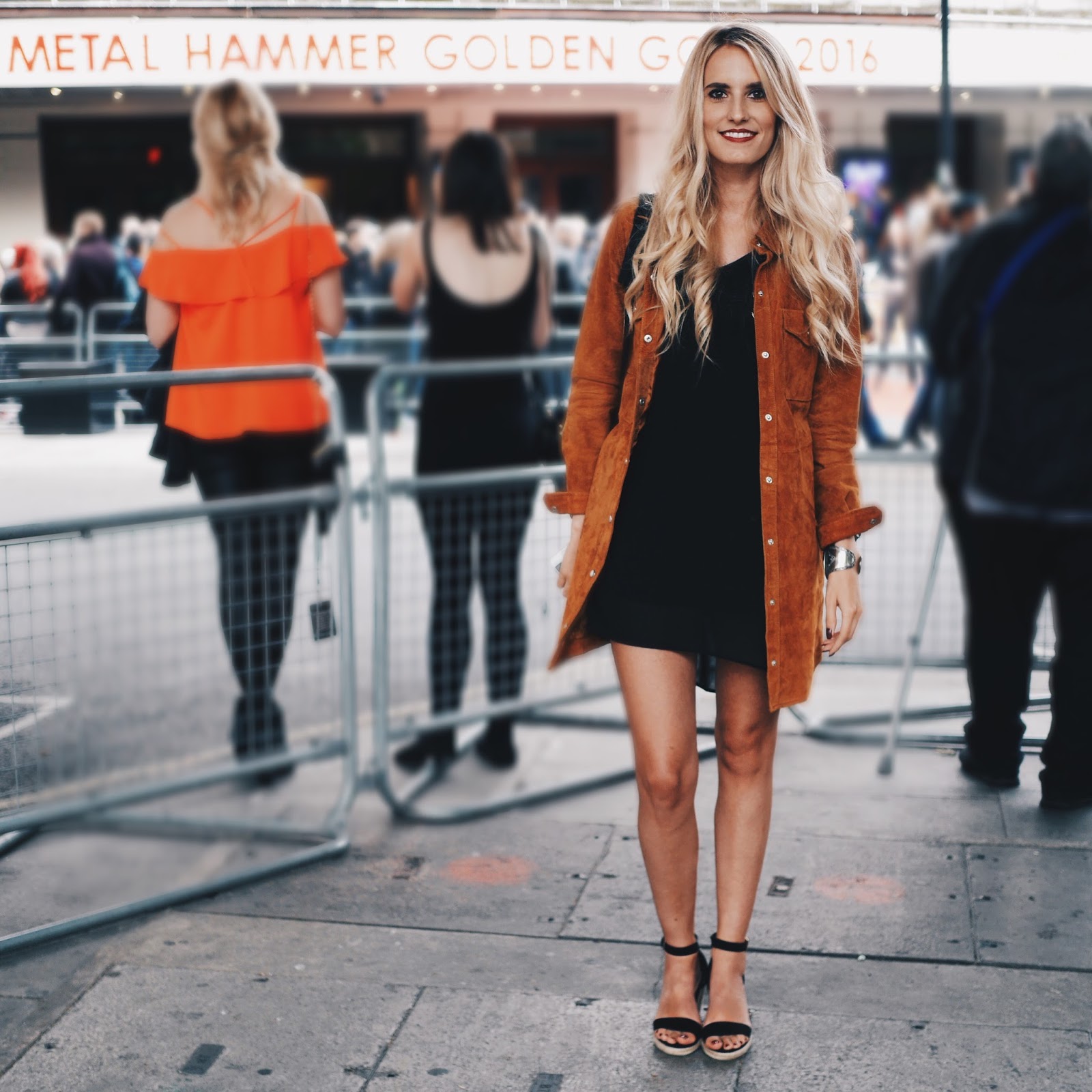 Last night I attended my first ever Metal Hammer Golden Gods Award. It’s not usually something I can face after a weekend of getting soggy at Download Festival, but as I didn’t attend this year I had a bit of juice left in the tank for a quick jaunt to Hammersmith Apollo. 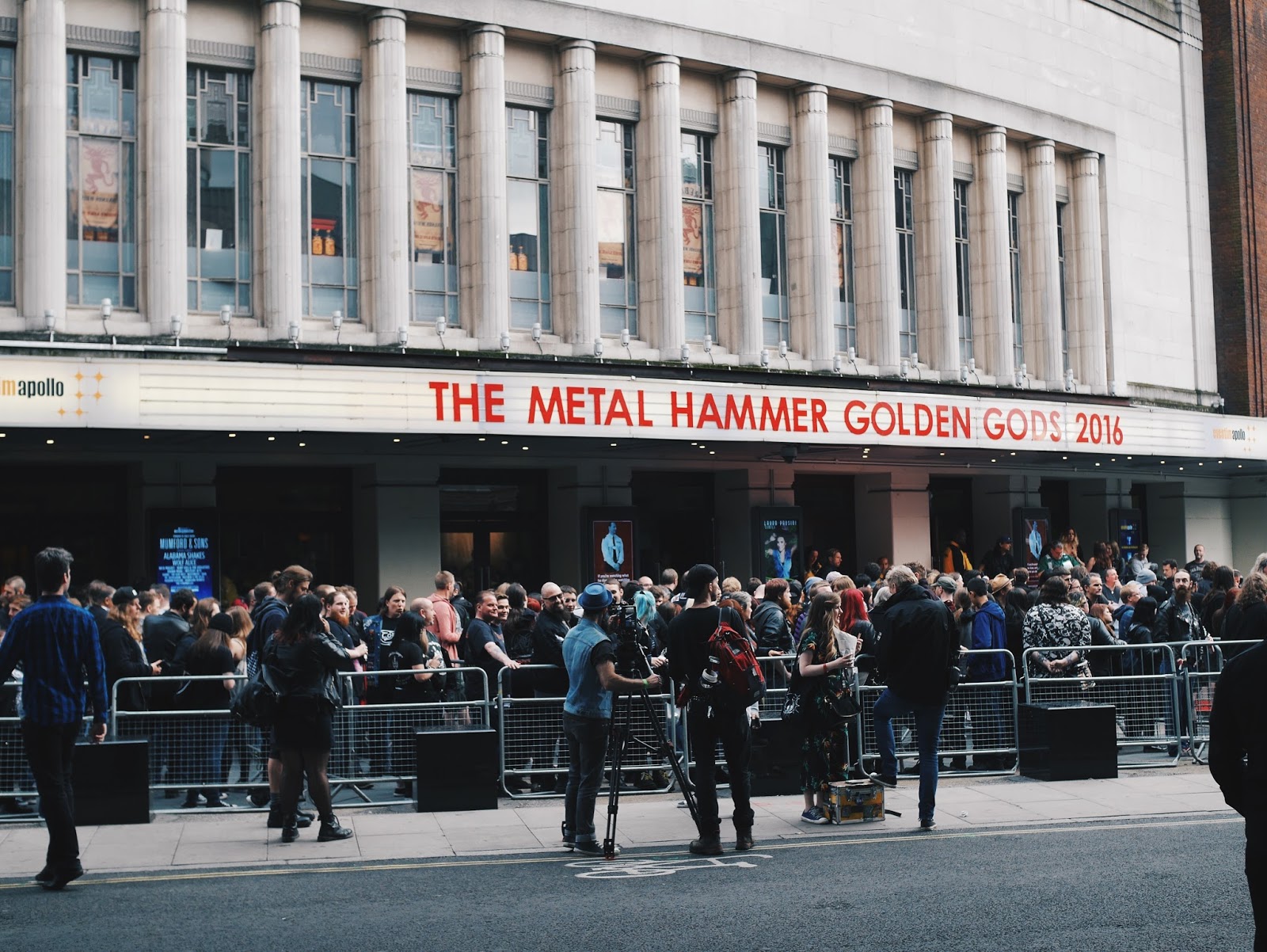 As I’ve never attended I didn’t really know how to dress for the occasion, my last minute decision to go didn’t help matters either. I had a quick google of past awards and it quickly became clear than really absolutely anything goes. Which is the way it should always be, quite frankly!

But this isn’t a fashion event, although a nice excuse to put a bit more effort in, this is a night to celebrate established, legendary, and emerging bands in the world of rock and metal.

When I was waiting for my pals – I always arrive uncooly early to EVERYTHING – I was witness to some spectacular entranaces from some of the night’s nominees and perfomers. There were marching vikings making extremely gruff and masculine noises before treading the carpet, as well as fully made up males who decided that arriving in a hearse was more befitting for the occasion than an Uber. 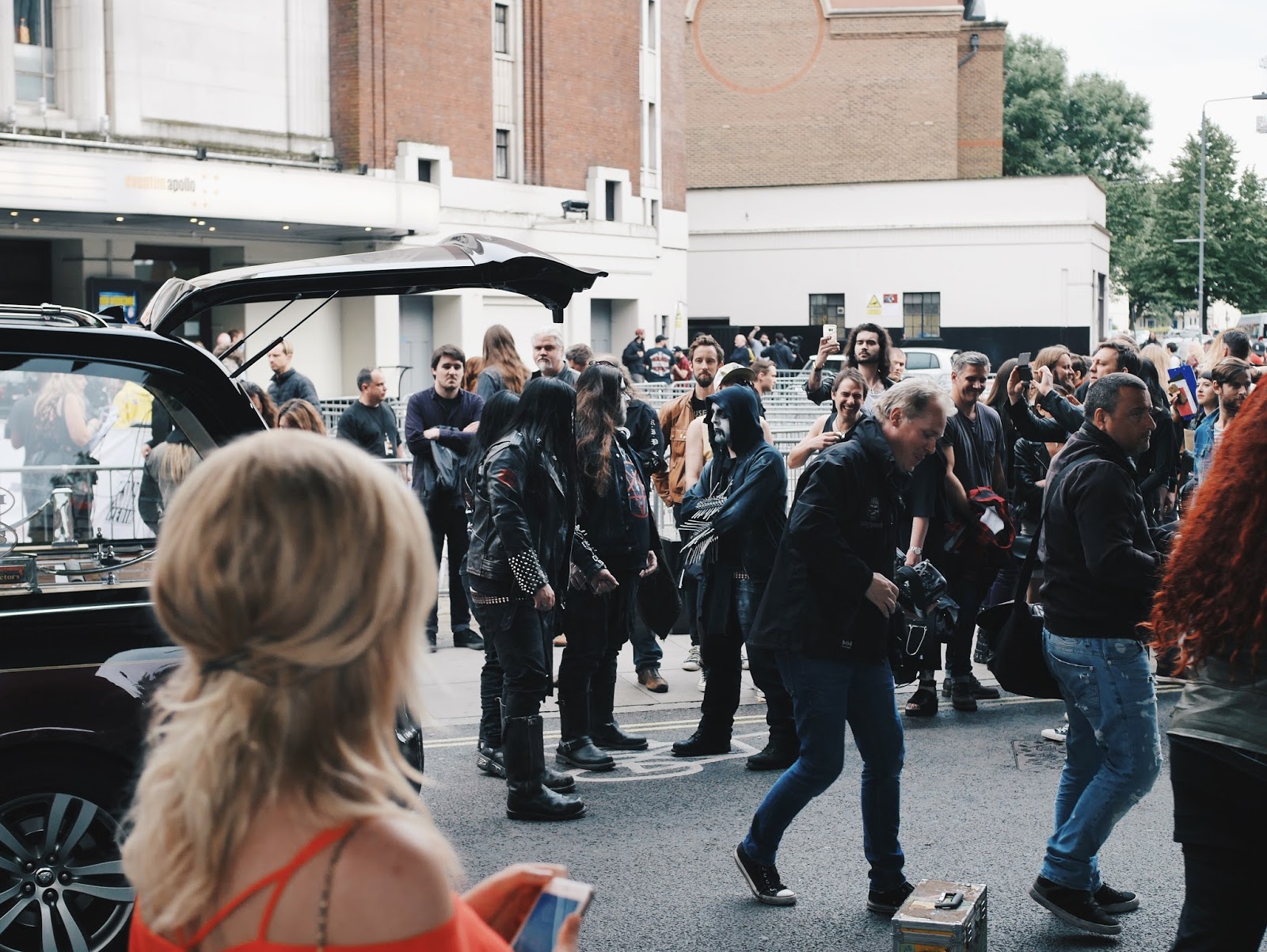 Other faces from the world of metal and music that were spotted being interviewed and papped on the carpet included New Years Day, Dave Mustaine, Asking Alexandria (minus a few members) and Creeper. Stu and Lee from No Devotion were also in attendance (who were recently awarded with Best Album at the Kerrnag! Awards, woohoo).

I actually had a quick natter with Hannah and Dan from Creeper, who appeared to be completely overwhelmed with the reaction the band is getting. They couldn’t believe they already have an award for Best Newcomer (from the Kerrangs!) and that they were up for an award tonight, as well as at the APMA’s. Nice to see people so humble, but still embracing the wonderful things that are happening. They seem particuarly excited about being able to attend the APMA’S, which is not something many  UK bands of their size get to do! These guys are destined for huge things, and part of an onslought of new and incredibly exciting UK bands. Trust me, music is really promising right now…that’s hope the industry doesn’t make it hard for them to succeed, and flourish to the level they deserve though. 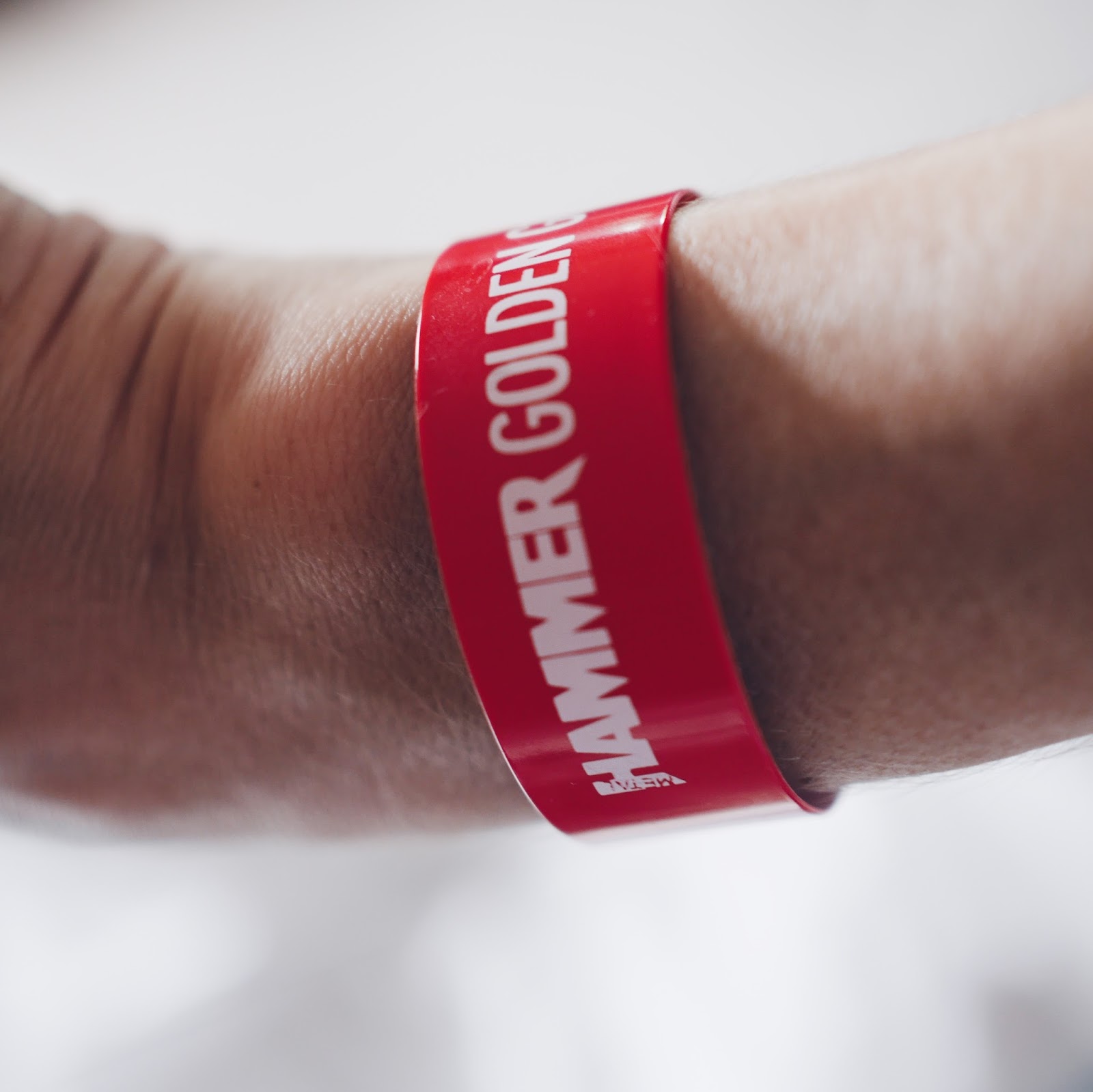 The first peformance I caught came from Swedish giants Amon Amarth, who put on a fantastic display with fire and all the OTT theatrics and costumes you could ever want. Who knew I’d dig Viking Metal…it definitely did something for me. 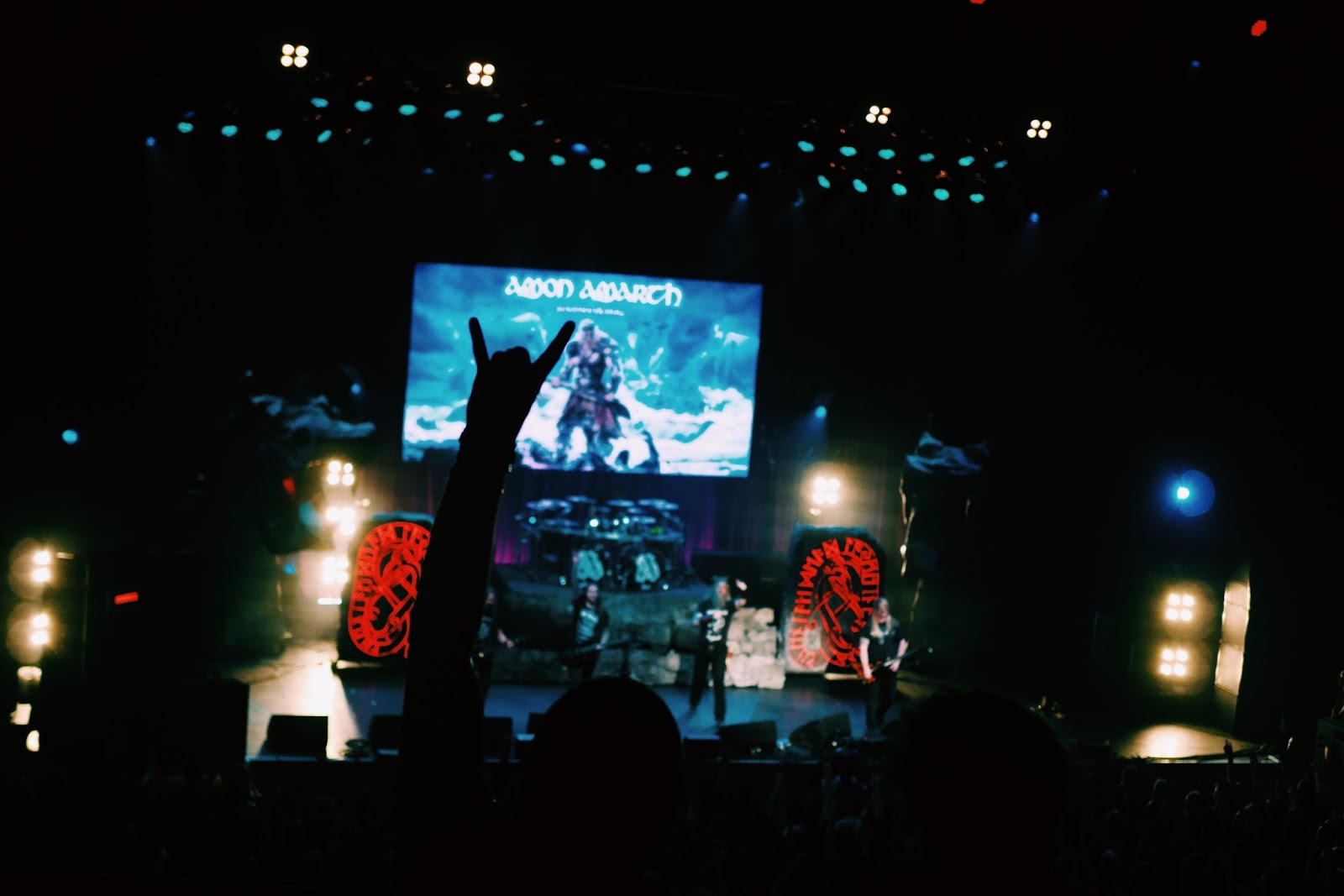 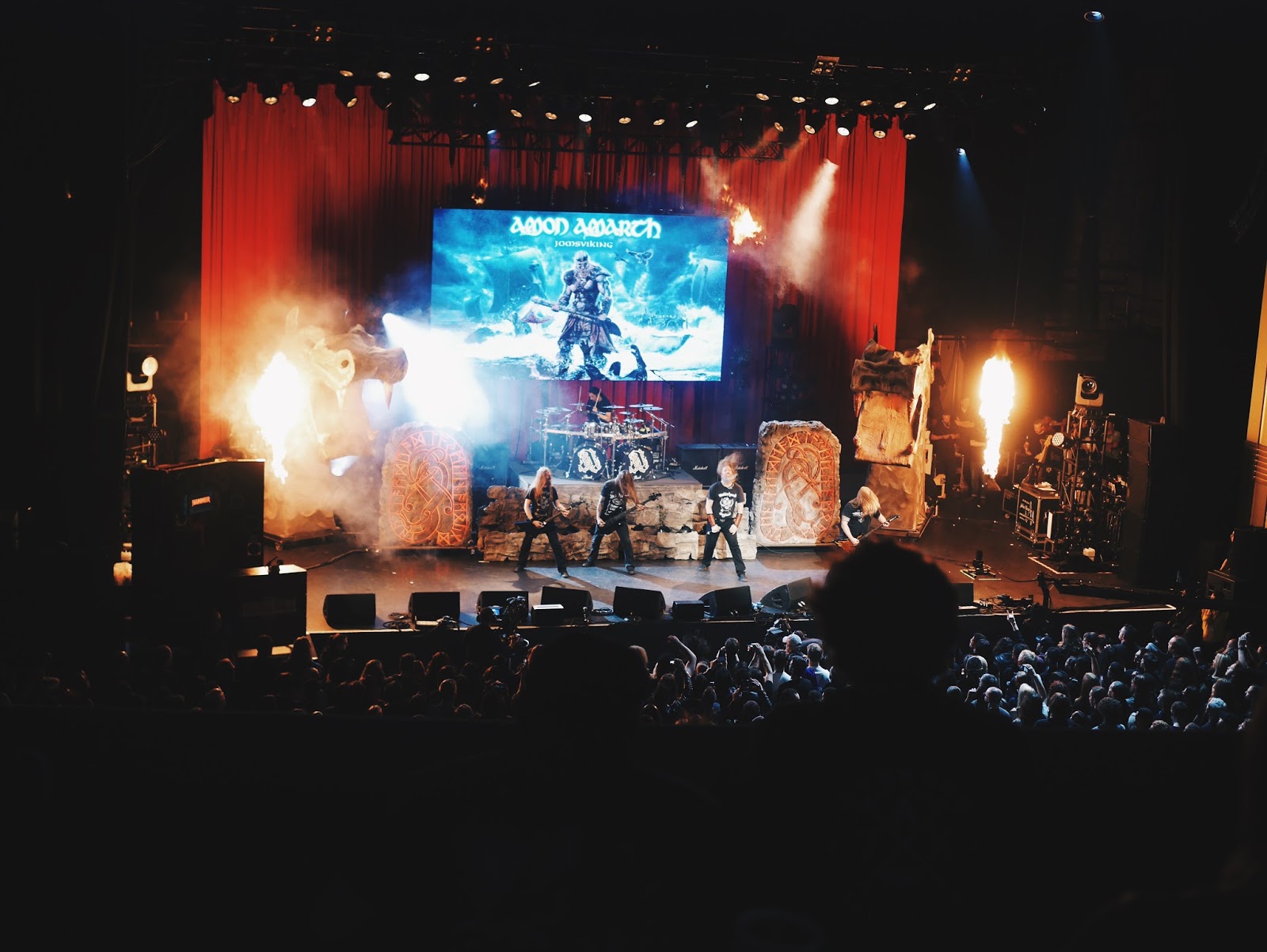 Halestorm’s Izzy proved that she was worthy of the Dimebag Darrell Shredder award by putting on a completely badass performance, featuring an impressively sustained high pitched scream. She did it all in the most beautiful sparkly silver heels too. What a woman.

It was fantastic to see the incredibly talented Caleb Shomo pick up the award for Breakthrough band. Beartooth’s new album is a belter and cements their prominent position in the scene.

Gojira was introduced by one of the hosts as the best band in the world, and basically indiciated that anyone wanting to form a band shouldn’t bother unless they’re as good as them. Big claims…

Whatever my view in terms of their position in the hierachy they put on a bloody great performance.

Quite rightly the night paid heavy tribute to an absent legend. Motorhead’s Lemmy has always been an icon of this scene. In fact he was always an appointed representative and face of metal to those that don’t/didn’t have any interest of clue about heavy music too.

Unfortunately, I had to head to the train station before the climax of the evenings proceedings, but I was informed that there was hefty and right-on musical tribute to the legendary man performed by Saxon, Mikey Dee and Phil Campbell.

That’s about all I can impart from my evening at the Hammersmith Apollo but here are the rest of the awards victors. 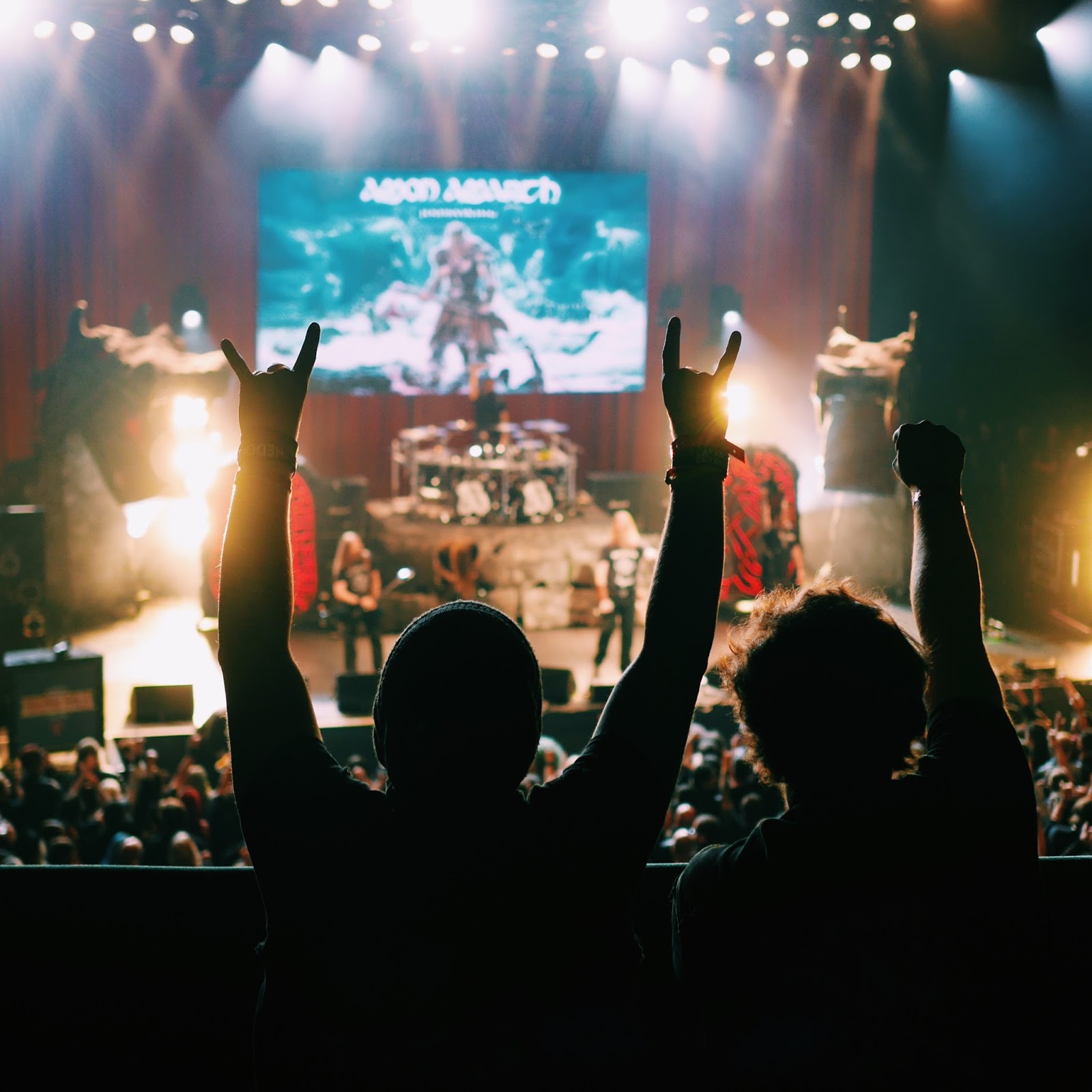 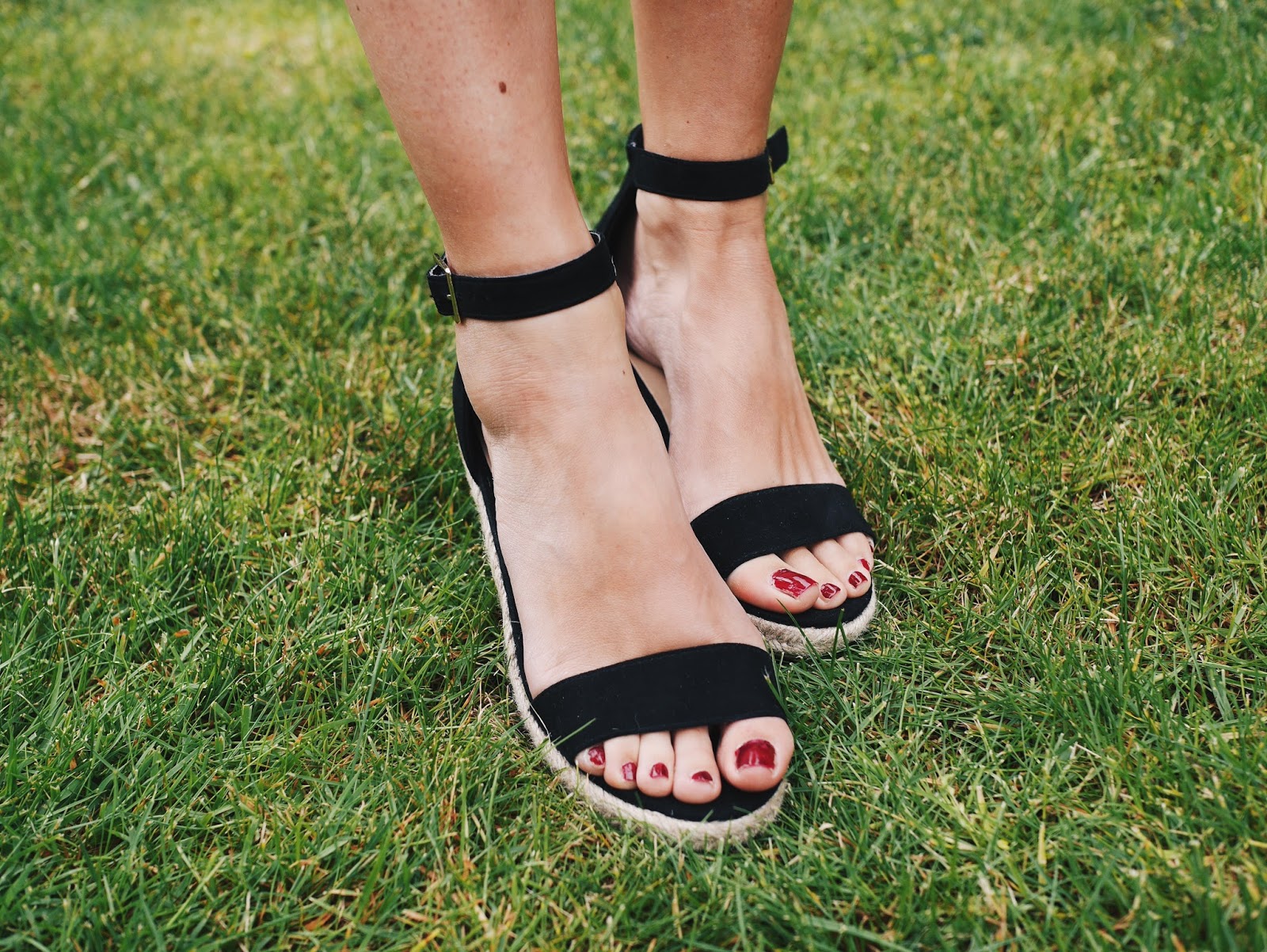 These New Look Wedges were a love at first sight purchase. I don’t actually own any evening approproate shoes I can walk in comfortably so there was a definite space for these beauties, particularly at their under 20 quid price. They are wedged which helps me maintain some level of balance,  and at a height that doesn’t encourage ridiculous tottering . I’ll be honest they rubbed like a bitch on my ankles, but I think I’m carrying some excess water at the moment… Cankles are fast approaching. 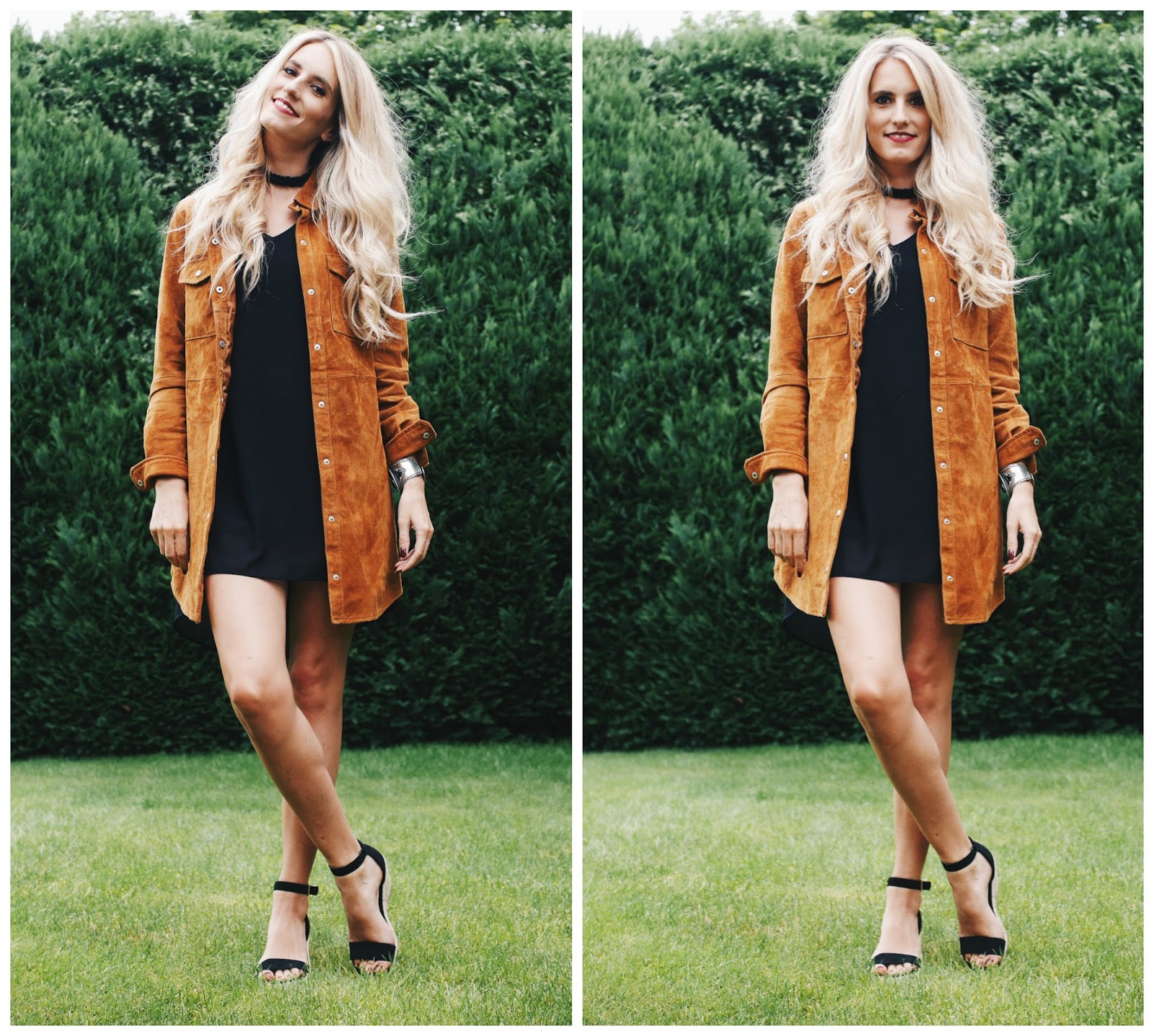 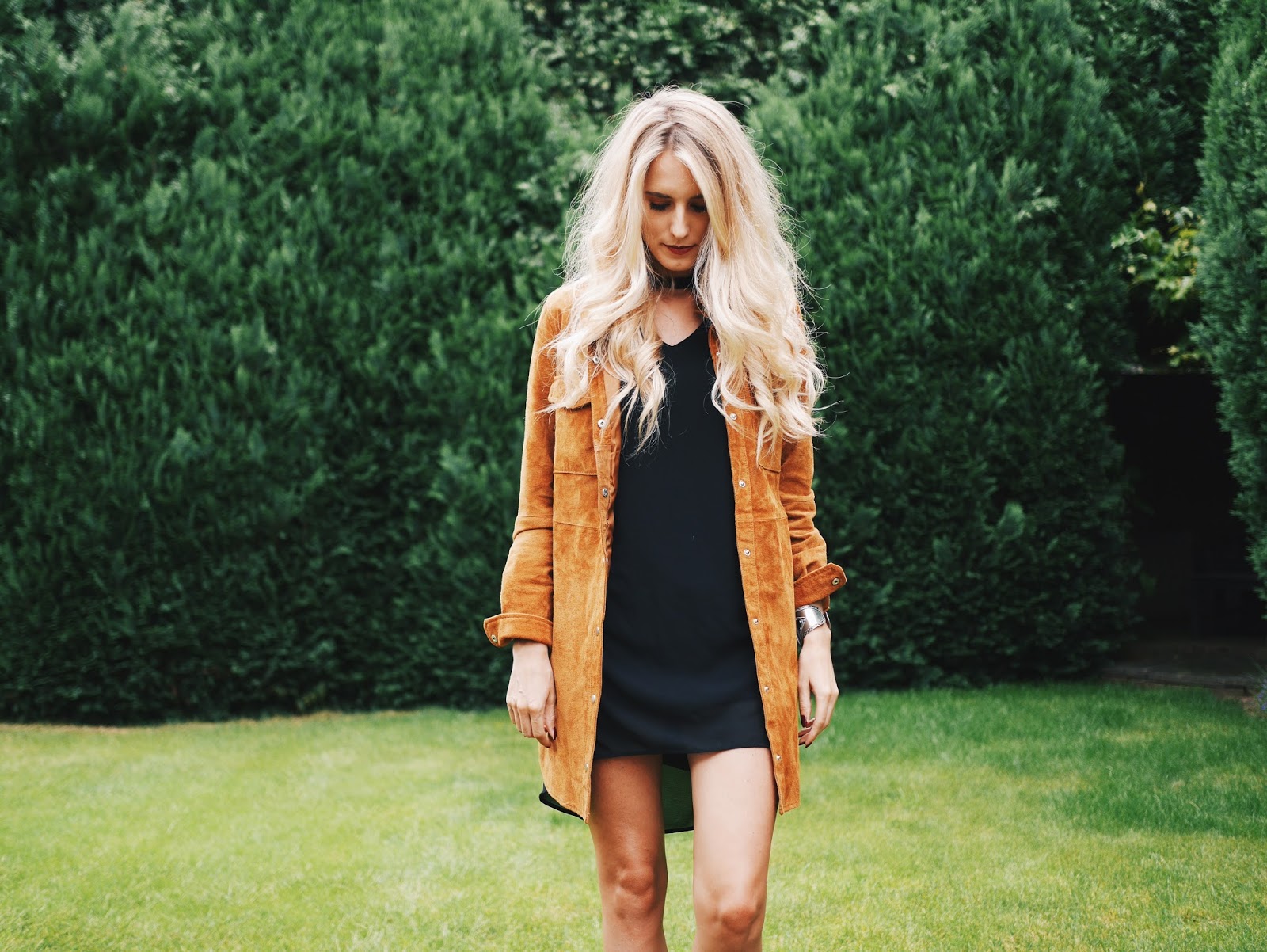 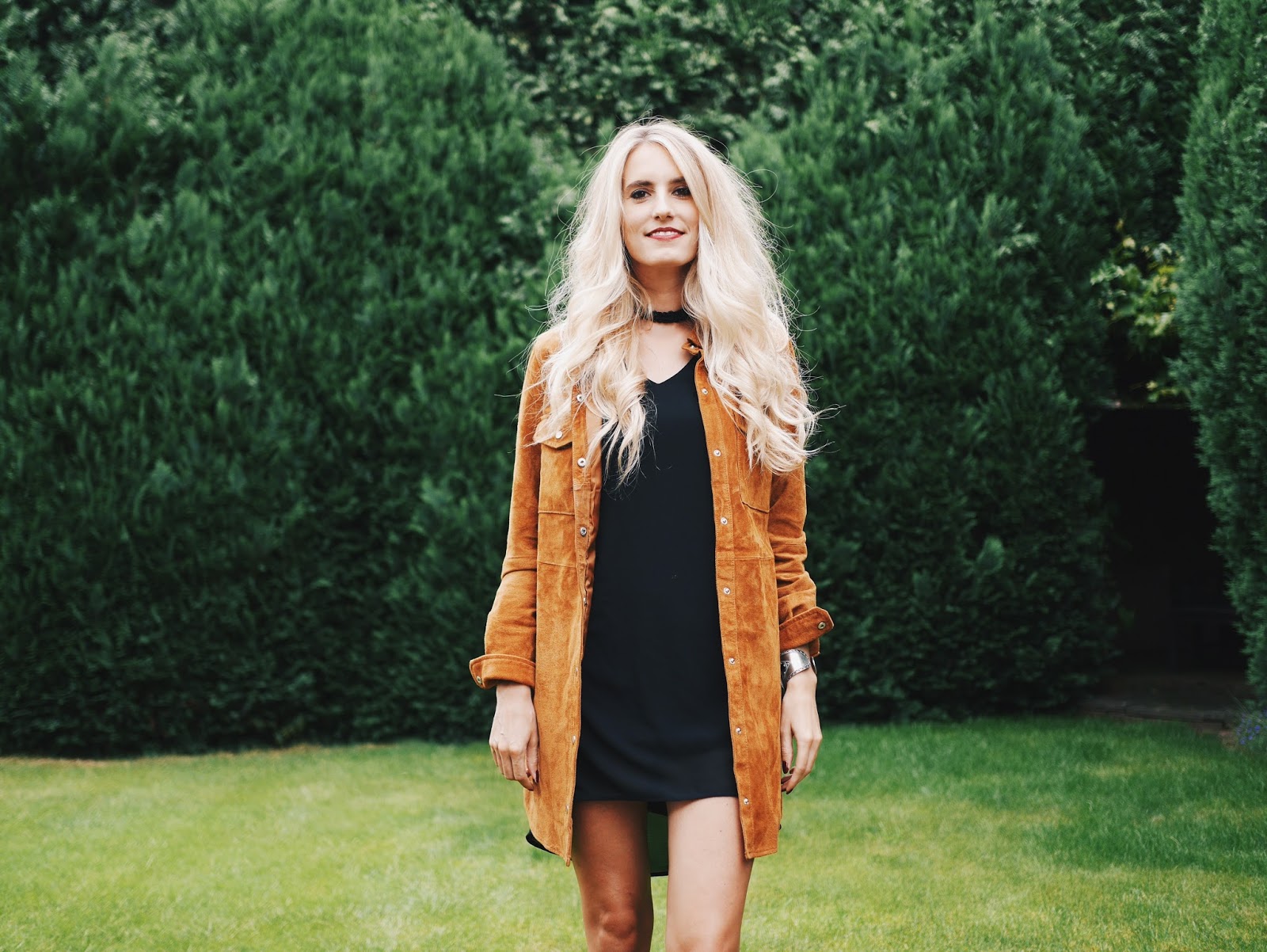 Another impulse purchase I made a little while ago before heading to New York. It was hung up amongst some t-shirts and styled as an oversized shirt, but I love it as a throw on jacket. 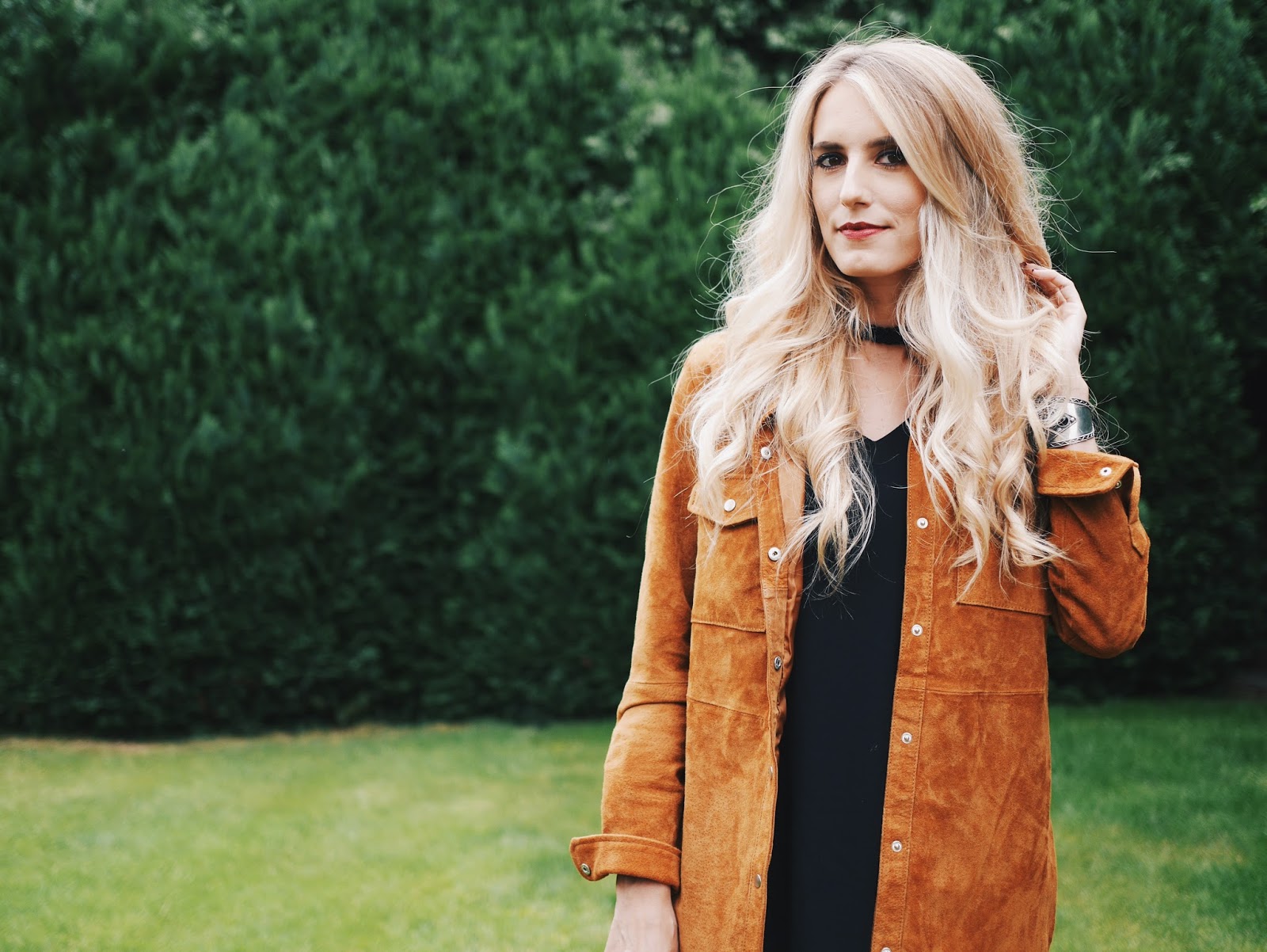 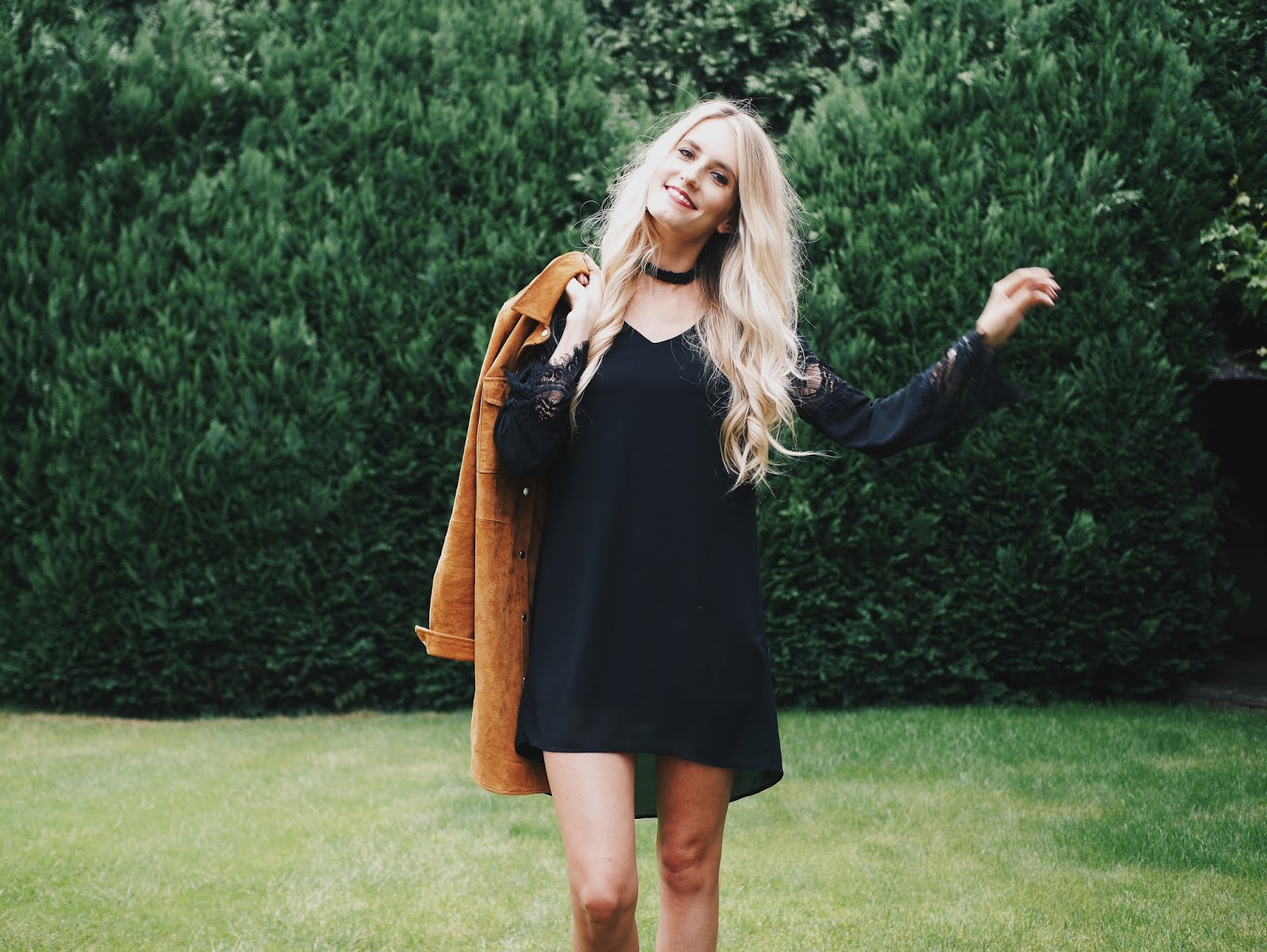 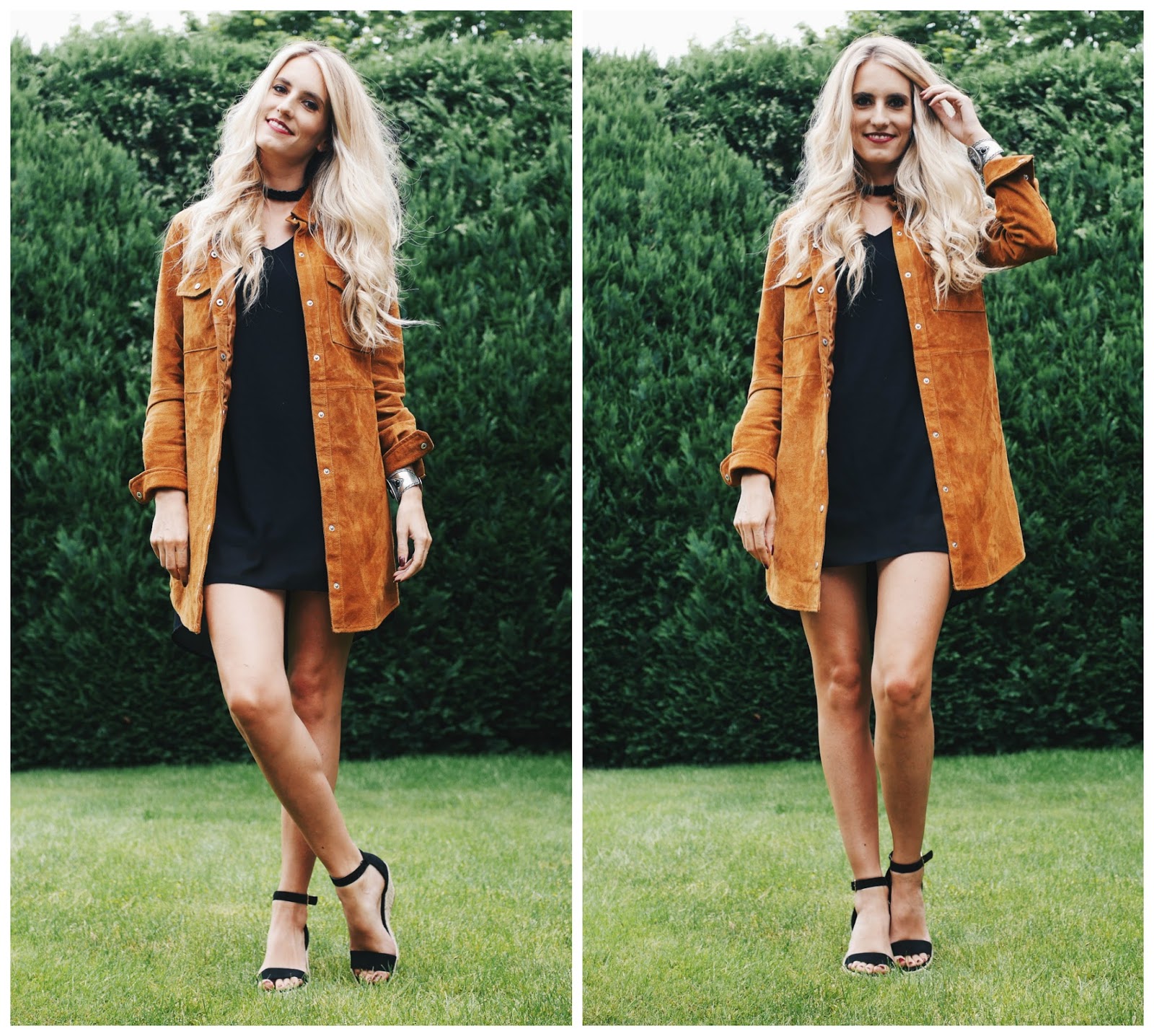 This is a Missguided dress that I actually wore on New Years eve a couple of years back. Its one of those great dresses for events that are a bit confusing on the dress code front. It can look casual and hippie-like,  but also smart enough should you be expected to look like you’ve made an effort. It also looks fab over statement leather look leggings – it’s a fab all rounder. If you aren’t a fan of your arms either it’s fab because although coevered up, the lace detail and bell sleeves stops it from being bland and boring and teases a flash of skin. 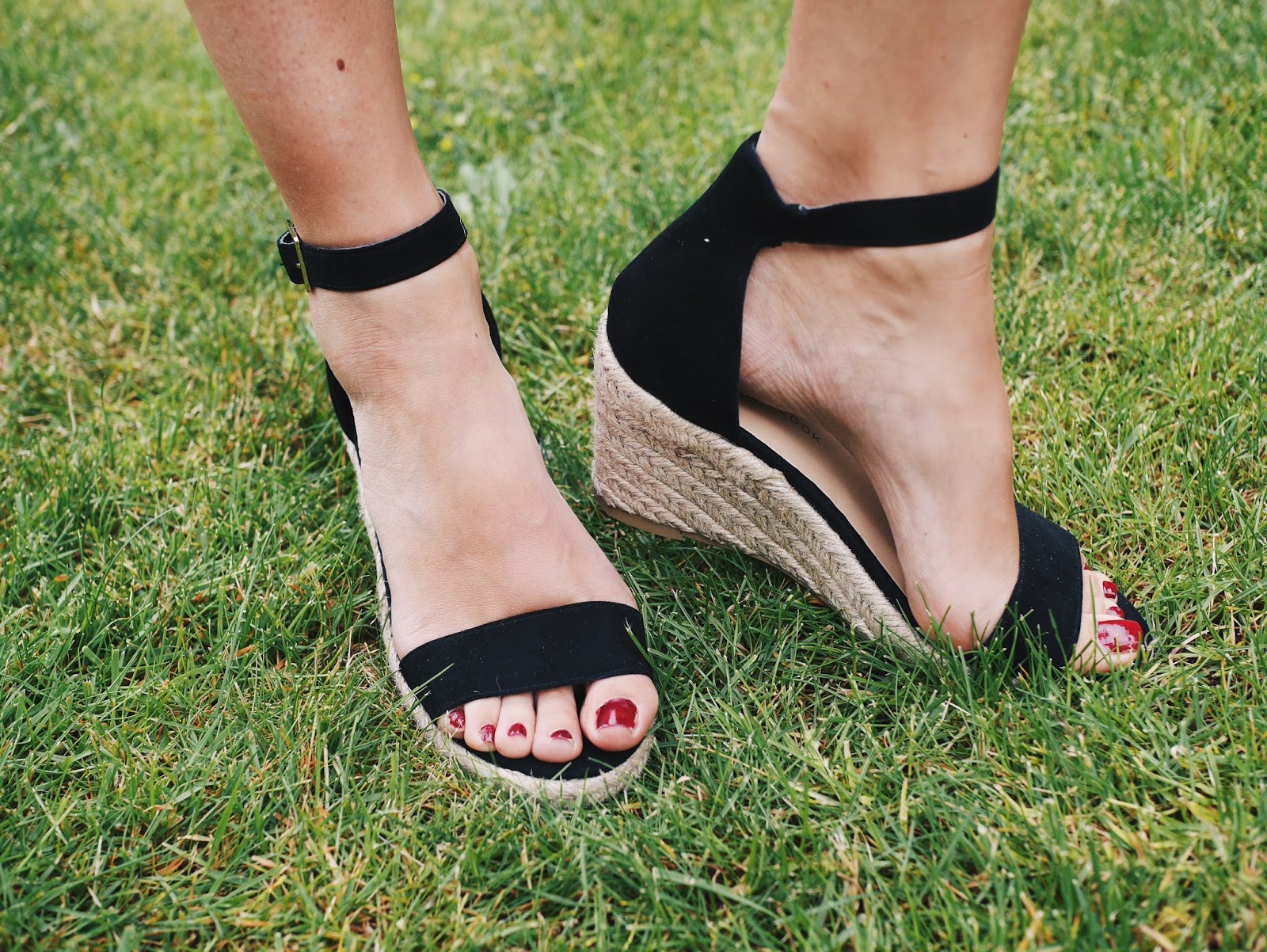 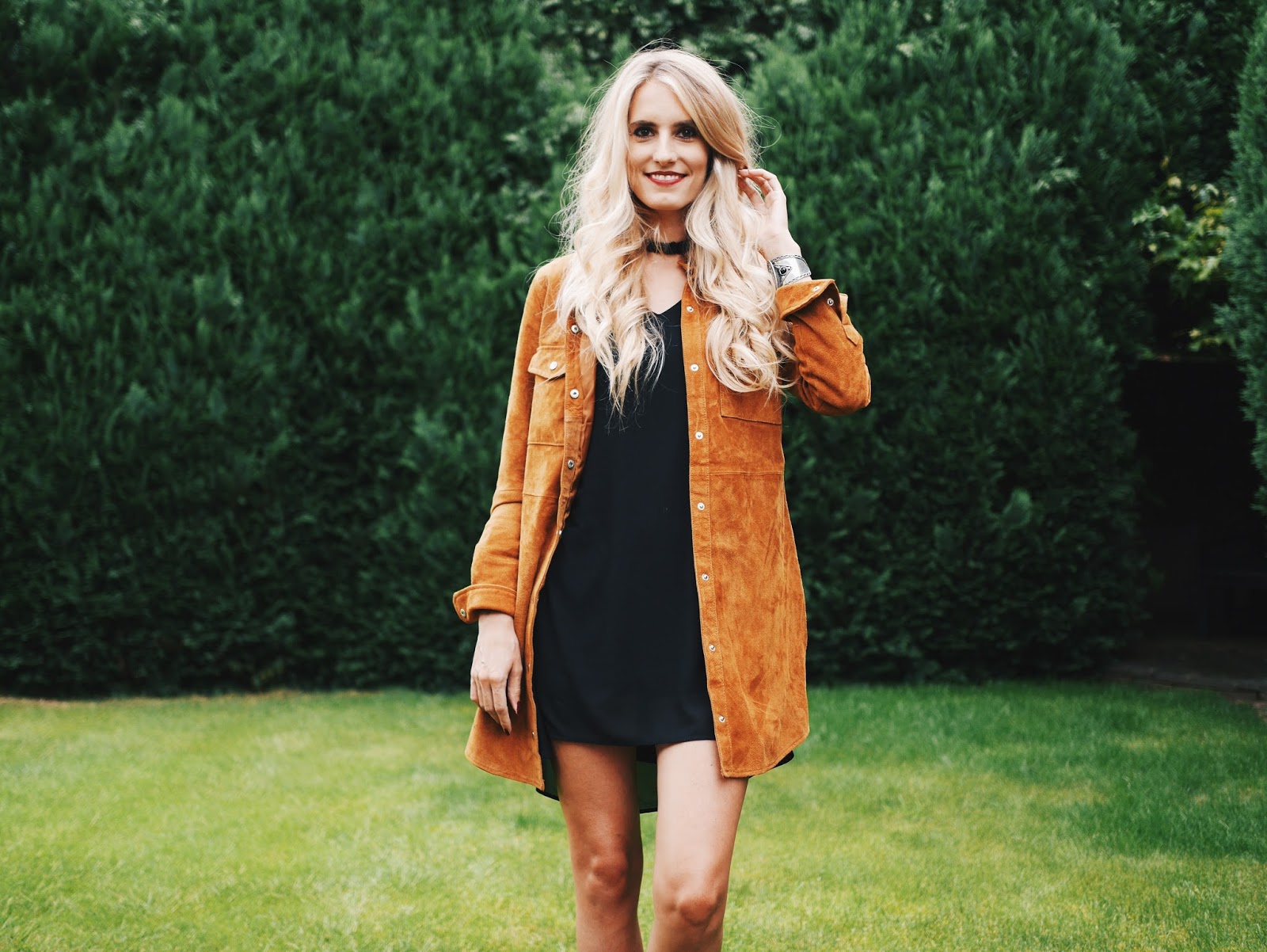 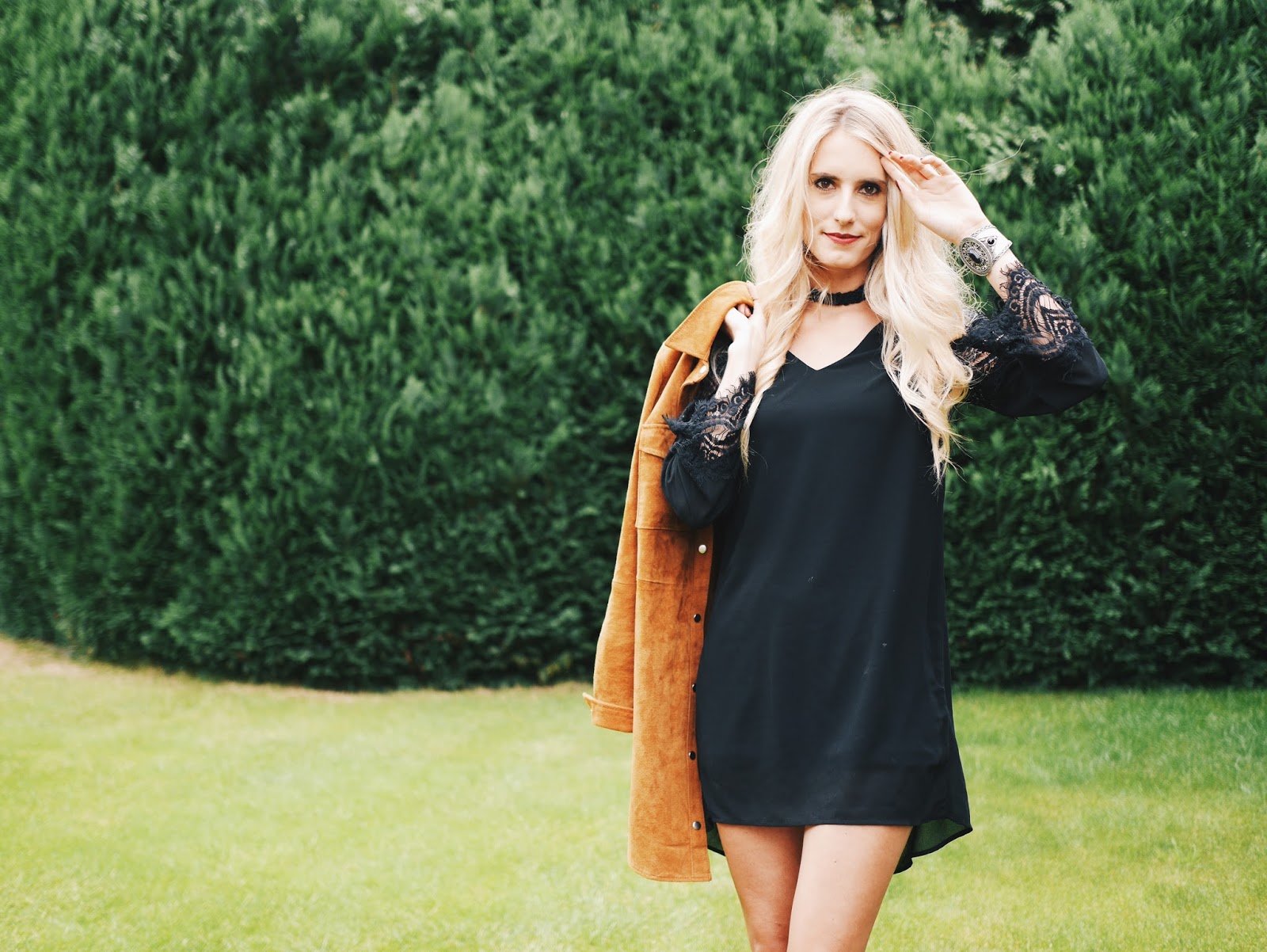 The only thing that is slightly annoying about this dress, and many dresses on the market right now actually, is that it is just a tad too short. It’s fine if you keep your arms down and have your witts about you when you get up from your seat or go up stairs. Unfortunately I realised when cheering for a band that the hem was skimming the bottom of my….well, bottom. I know there are lots of midi dresses and maxi dresses if you don’t want to opt for these risky numbers, but I’d love to be able to find a short dress that was that right kinda short. Sexy not slutty…you know what I mean?

Luckily because this dress doesn’t show off the baps, or flesh anywhere else for that matter, I think you just dodge looking trashy – well I bloody hope so anyway! I think this dress was actually inspired by the sell out designs by For Love and Lemons, albeit with a much more realistic price tag. 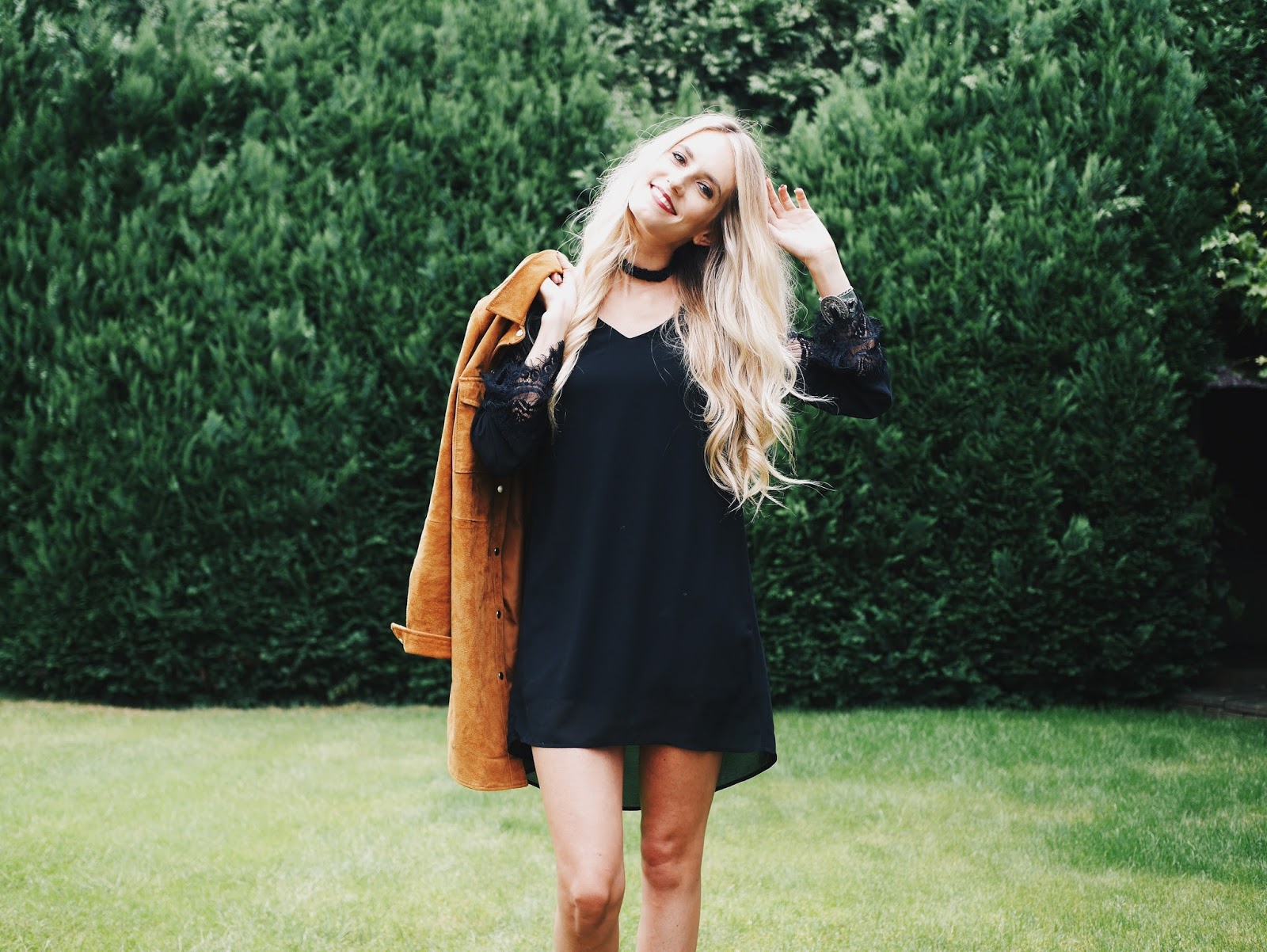 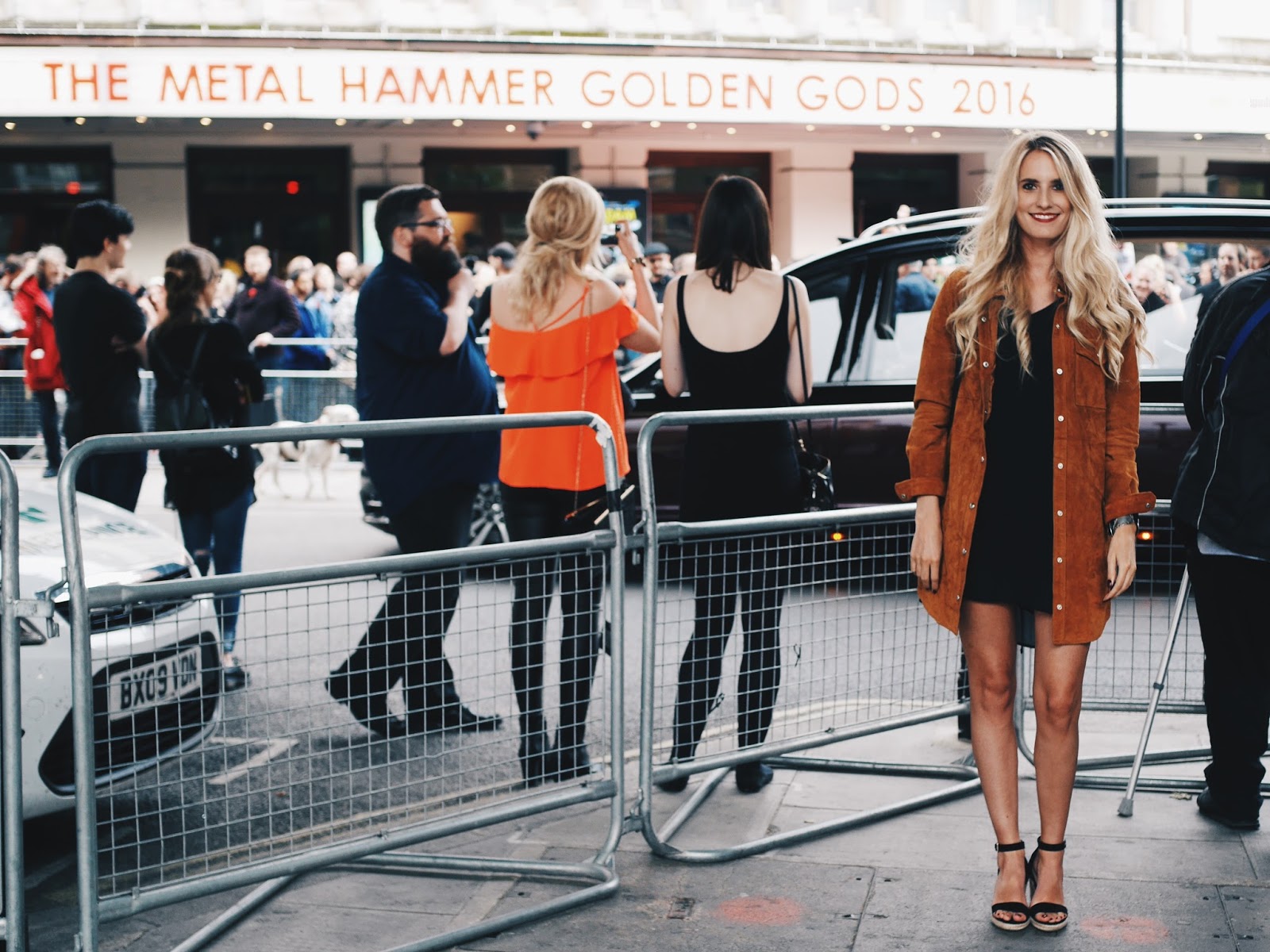 As I post this picture now I realise my choker isn’t on anymore. I only realised about 20 mins later that it had fallen down  and landed inside now gaping my bra ( my boobs have shrunk drastically lately and none of my underwear fits). It must have been my lucky day –  normally it would have been long gone. I would have been in trouble too, I’d ‘borrowed’ that off mum. 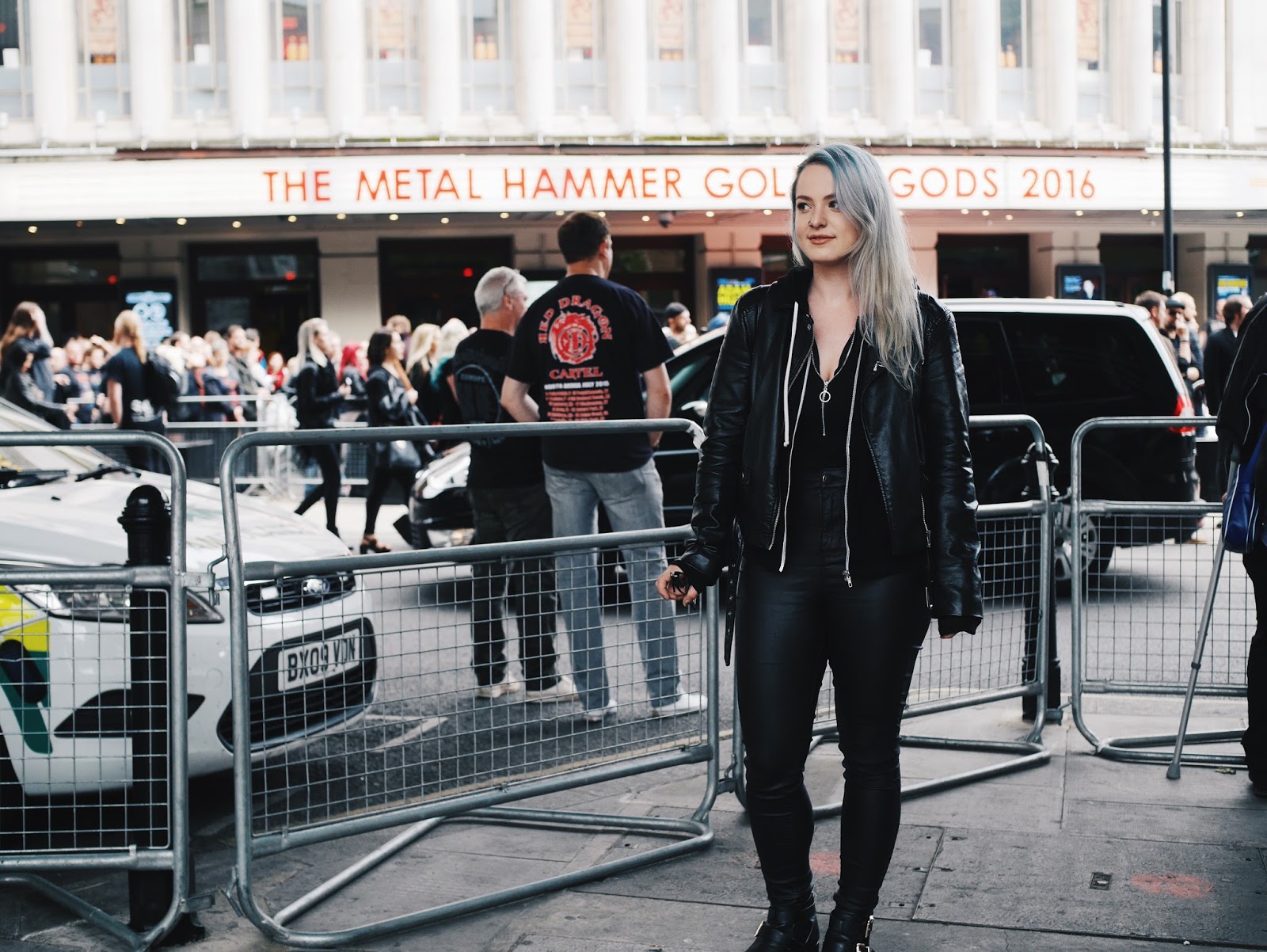 Look at my gor friend Iris, doesn’t she look like a silver haired rock goddess..

Thanks for having me Metal Hammer, and for consistently championing amazing music!