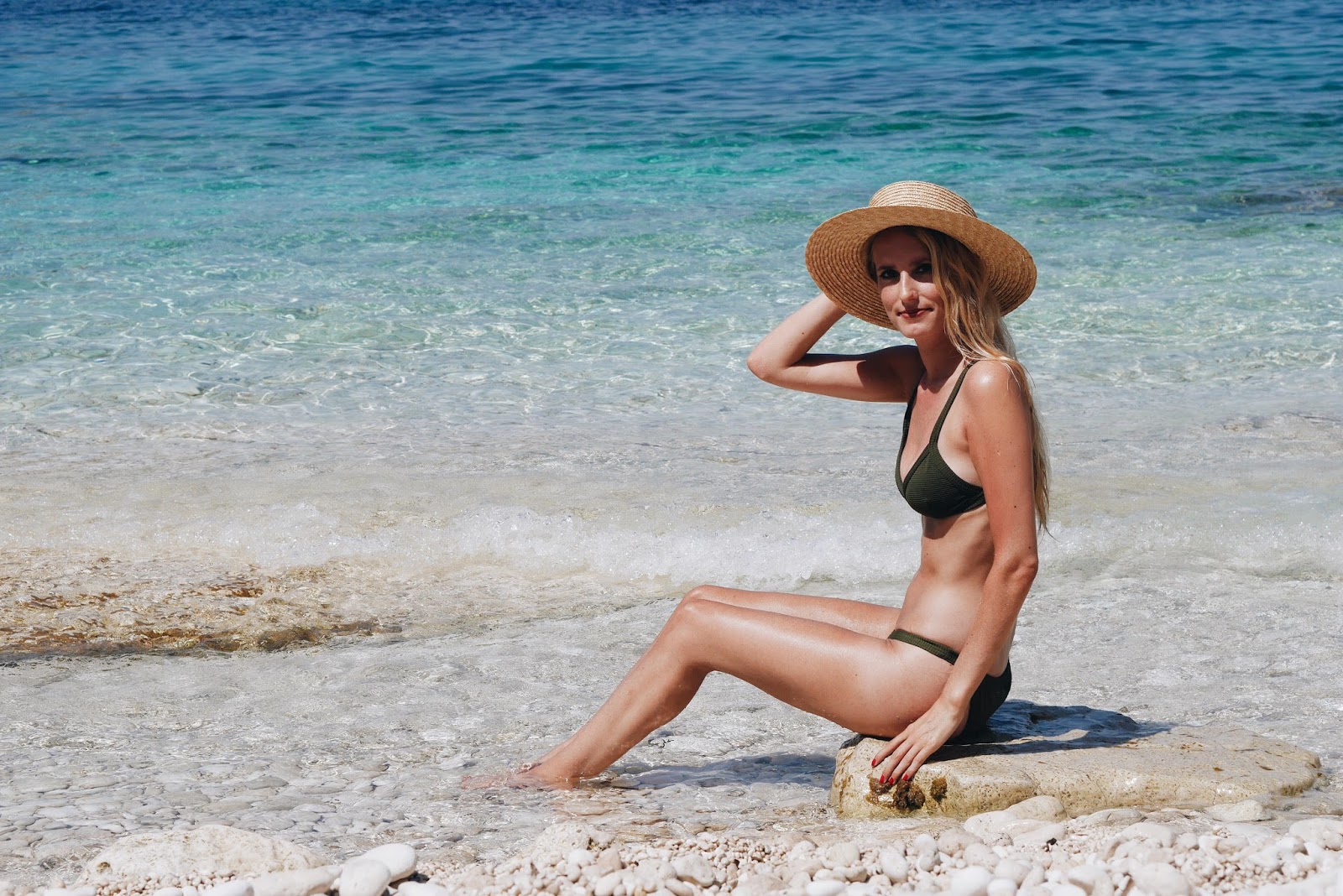 One of the things that attracted me to Kefalonia (aside from the fact that it was only destination aside from Ayia Napa left on the Thomas Cook’s database) was the images of it’s beaches. In all the descriptions of the island online and in brochures, the stunning scenery and idylic beach settings were at the heart.

Si was away at Warped Tour and despite not having any money I decided we needed some time away together once he returned. Knowing that I’d only have him for a few weeks before he’s departed for America again, and then straight onto a UK/Europe tour which would take him through to November, I felt it was essential we have some concentrated him and me time, alone, without the usual distractions of home life…and parents. 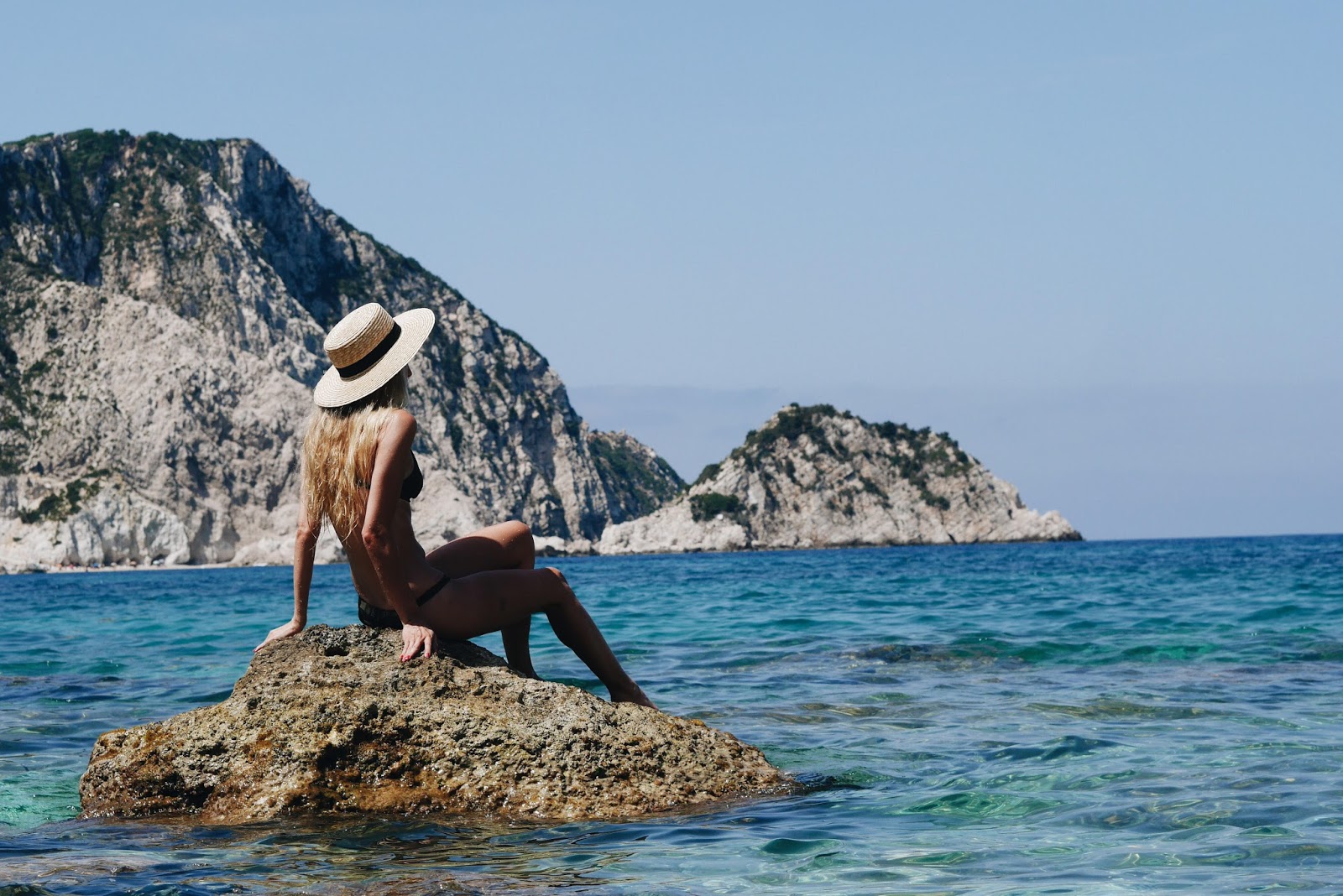 It felt like a huge responsibility choosing and booking the holiday without being able to run it past Simon first.  Due to the time difference, and the fact the time was running out on being able to book a last minute trip, I had to bite the bullet, book something and hope for the best. 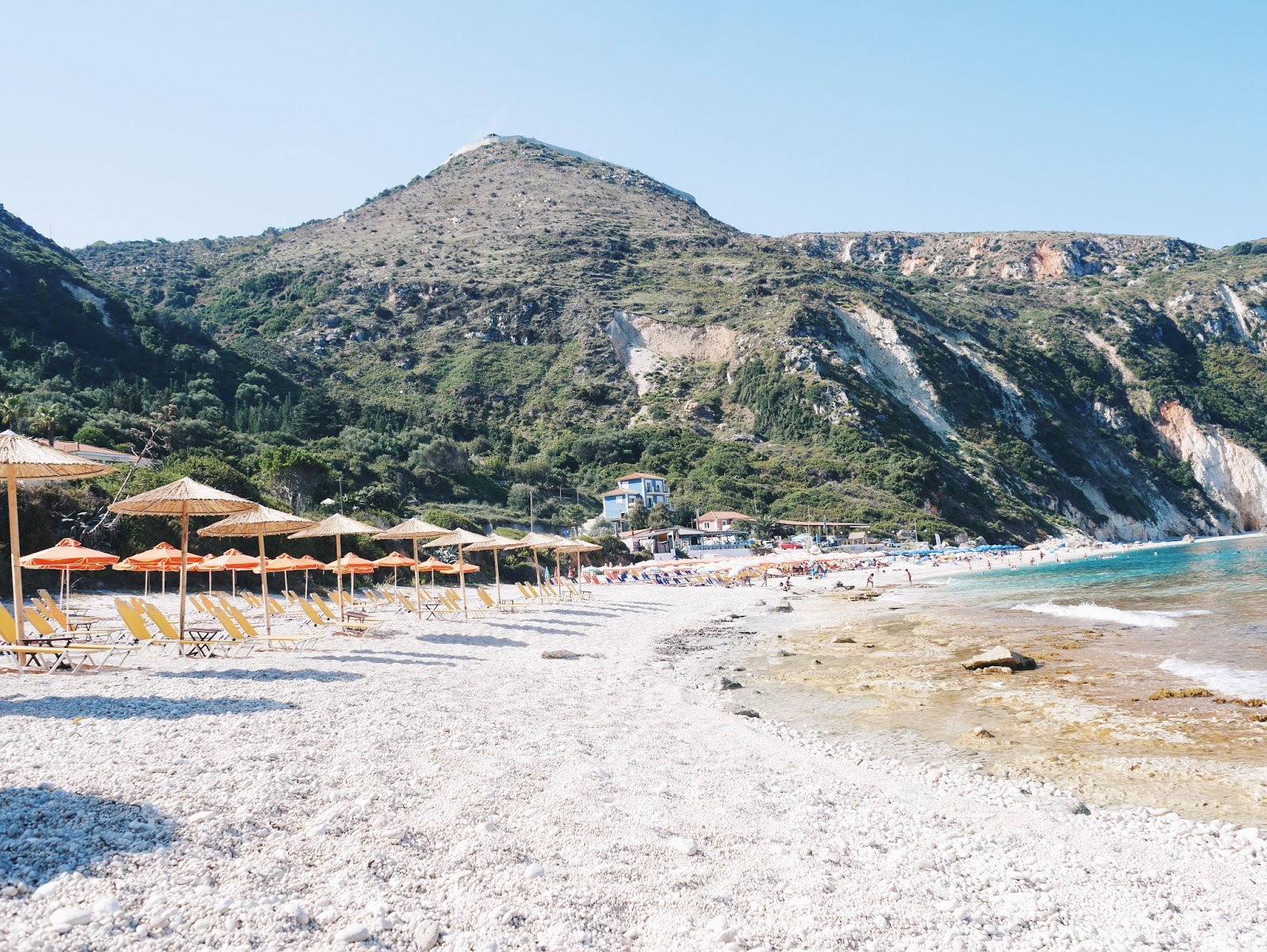 When I told Si I’d booked Kefalonia, there was an unsettling pause. He didn’t know where it was, or what it was like, so I guess it was hard for him to react in either a negative or positive way. I hoped that last year’s successful holiday, which I also booked, would ease any doubts he had about my choice. I decided visuals may be the way to instill confidence in my decision. The first image I sent over proved to be a powerful in encouraging excitiement about our impending trip. The image was an aerial shot of Petani beach, featuring it’s aqua marine water and white pebbles (that looked like white sands from that distance). 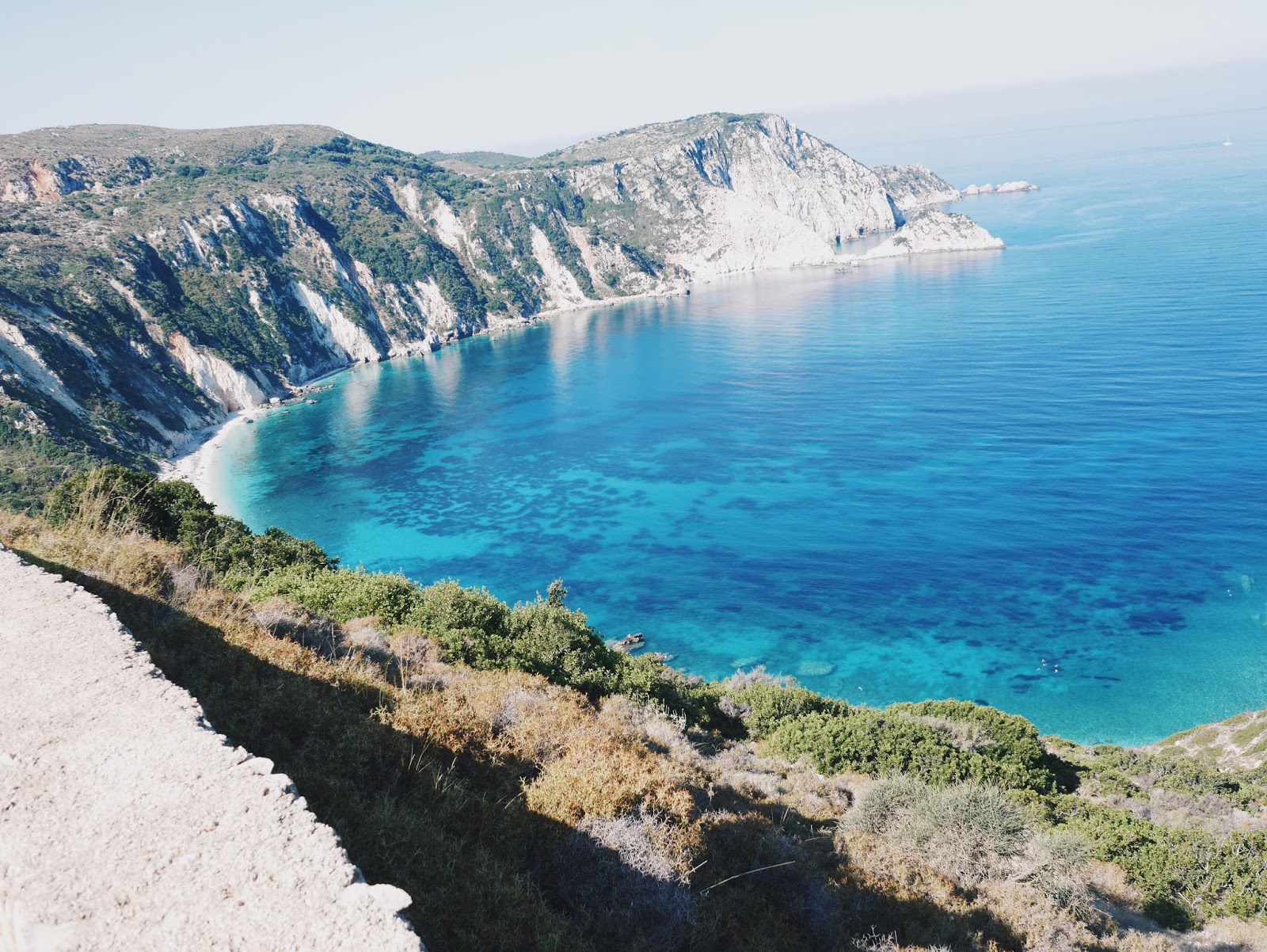 When I tweeted out that we’d booked 5 days in Kefalonia, I received numerous tweets that confirmed our destination would deliver stunning scenery and lots of opportunity to chill in the company of clear waters and lush green landscapes. Our friend Jordan, who have unwittingly become our regular holiday guru, advised us on the different beaches on the island, all which would require a hire car to access. I’m so glad he told us this, because we spent the majority of our holiday driving round the island and would have been totally stuck without out little fridge of a run around. 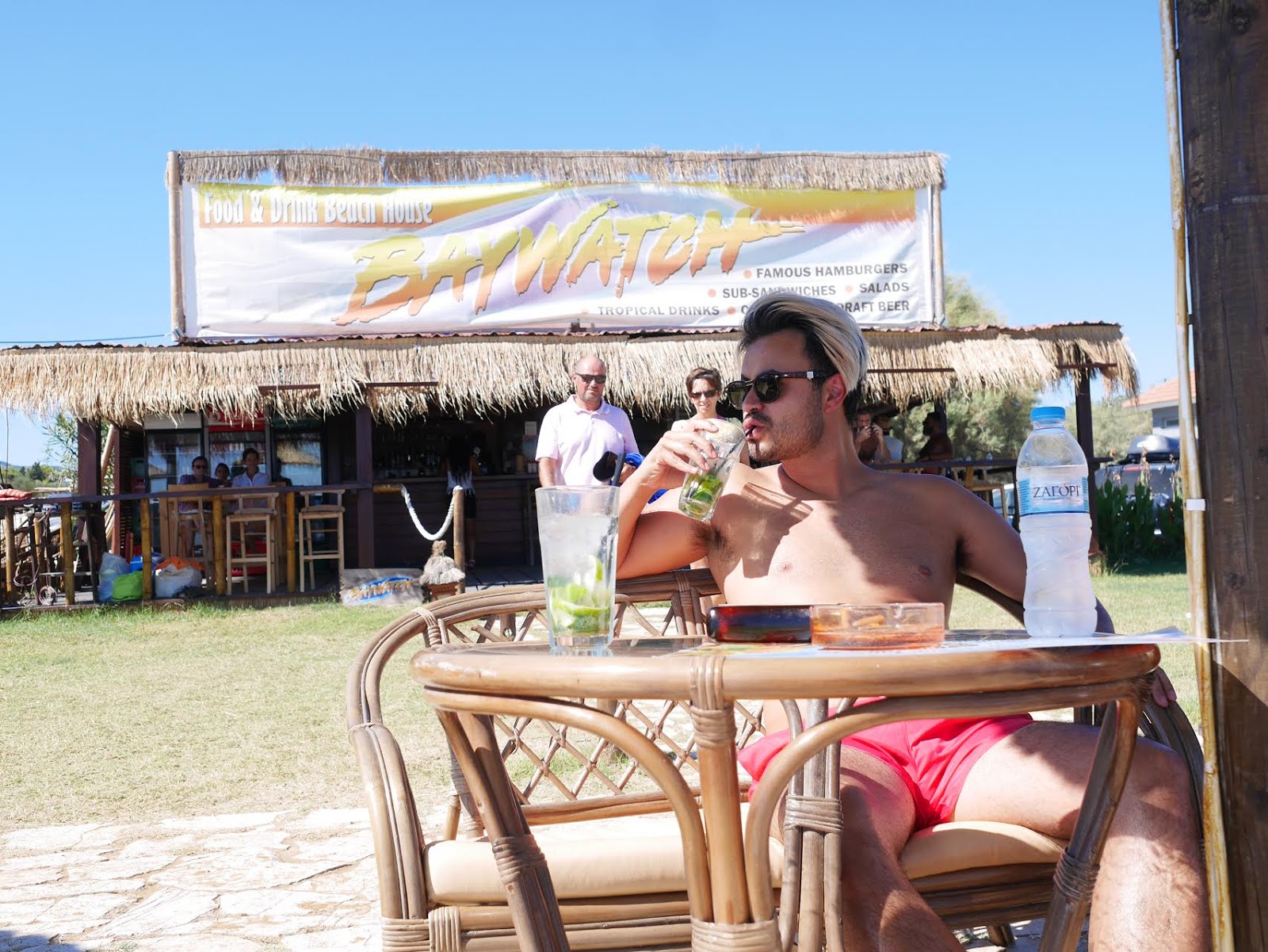 The first beach we saw up close was Xi beach which was actually at the end of our hotel (Cephalonia Palace). Despite it’s close proximity we decided within the first hour that this wasn’t the beach for us though. The sand was light brown (less attractive than the white sands we studied on google image) and it was extremely busy with family’s. It is great if you want to do watersports though, and it had a few great beach bars to gaze at the sea from. Baywatch Bar delivered our first lunch (and Mojito) on the island, and the chips were among the best I have ever tasted. I know, that’s a massive claim, but it’s true! 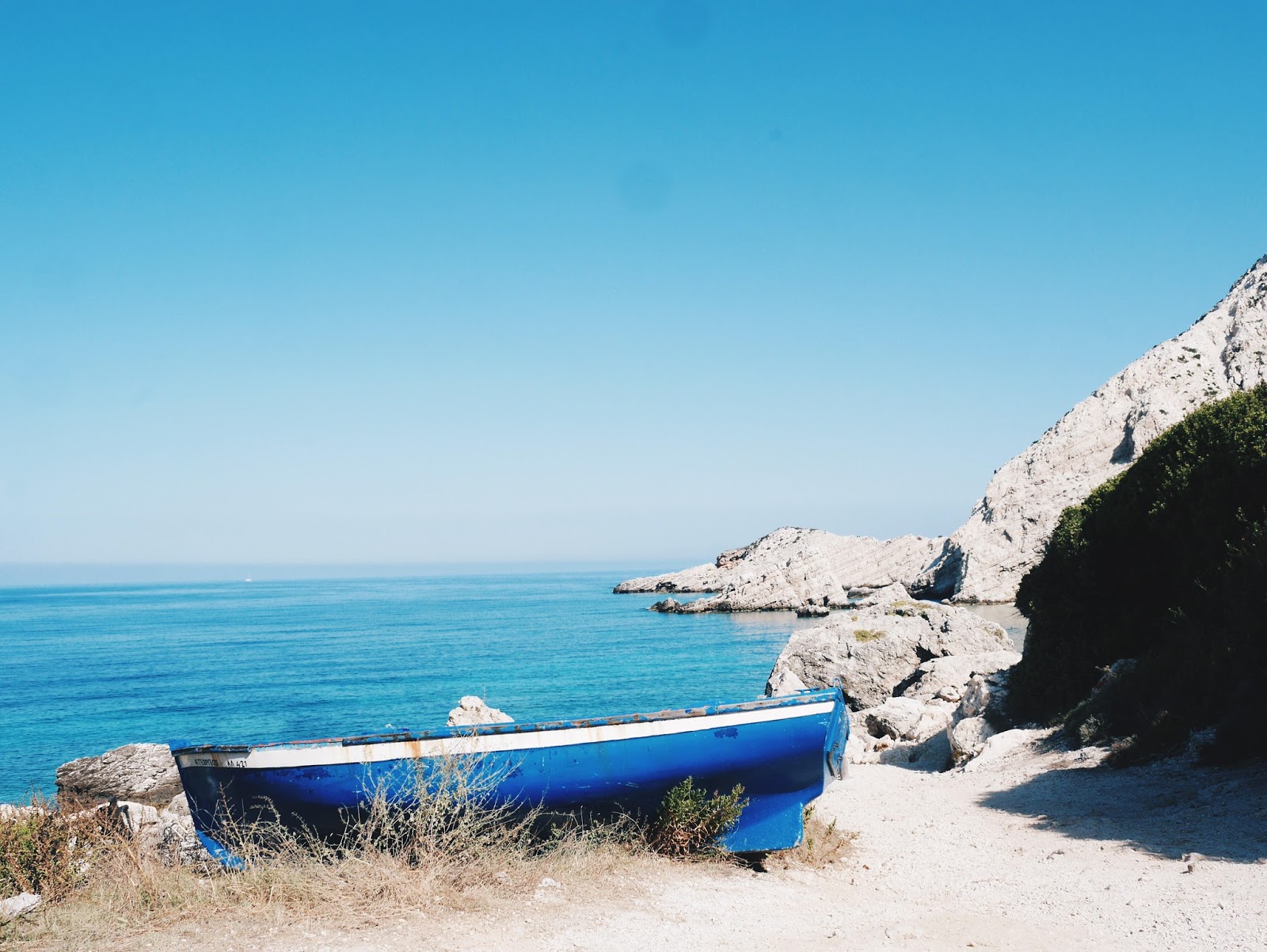 Where you park at Petani beach

Jordon’s favourite beach was a small but perfectly formed one called Petani. As it was fairly close to us we chose that to be the first one we visited. We arrived at about 10am and at that point we were able to get a parking space right near the rocky stairs that take you down on to the beach. From other days we learned that it was essential to get there early to ensure you get one of these handys spaces, other wise you’ll heave to try and find a spot somewhere on the snaking road, which isn’t always a stress free task. The drive down is precarious at times,  but the views are utterly spectacular, if not a bit distracting for the driver. 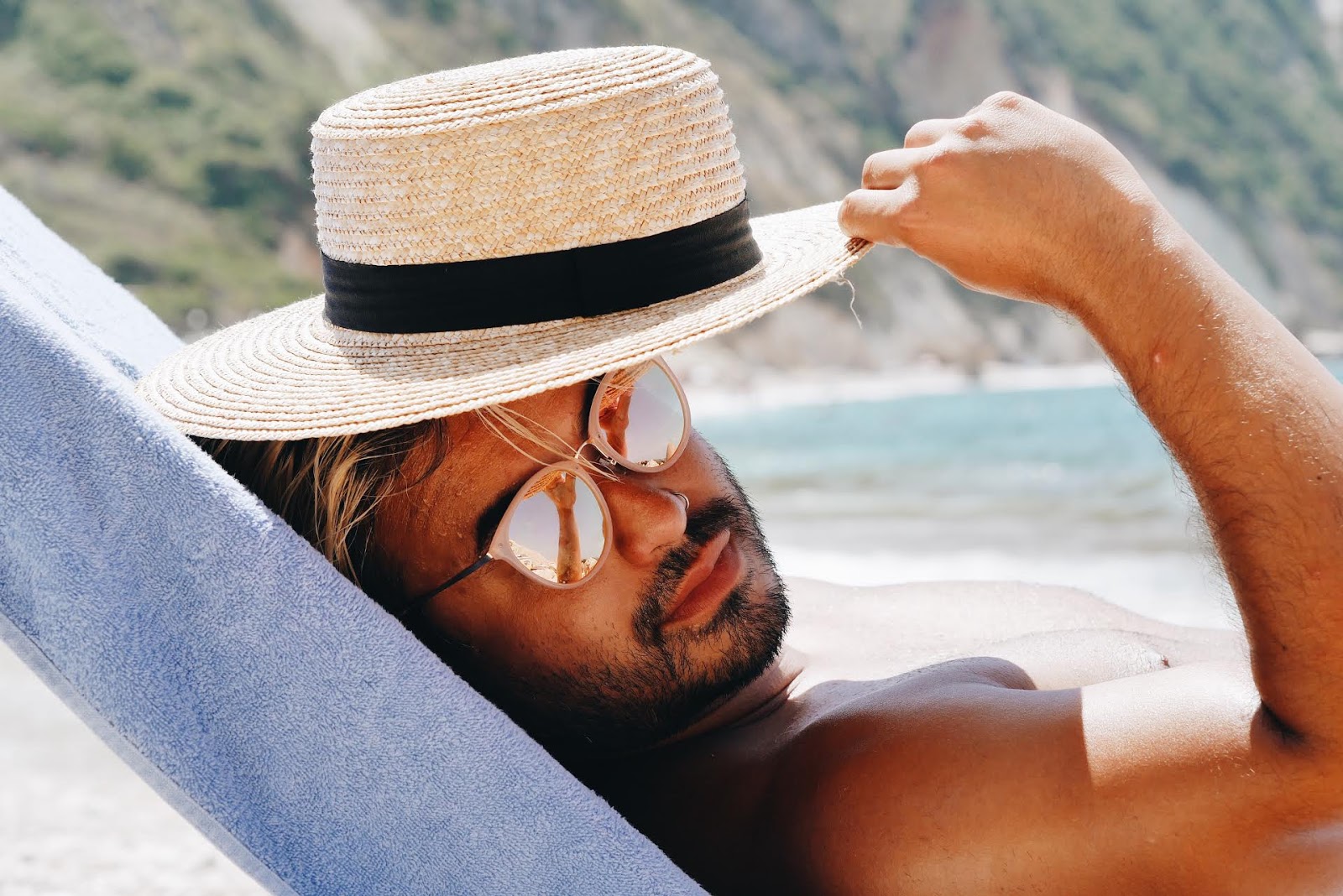 We favoured a spot right near the first Beach bar, next to where some boats are moored – mainly because it was empty when we arrived. but also because it meant easy access to the bar’s toilet and our car for when we were ready leave. 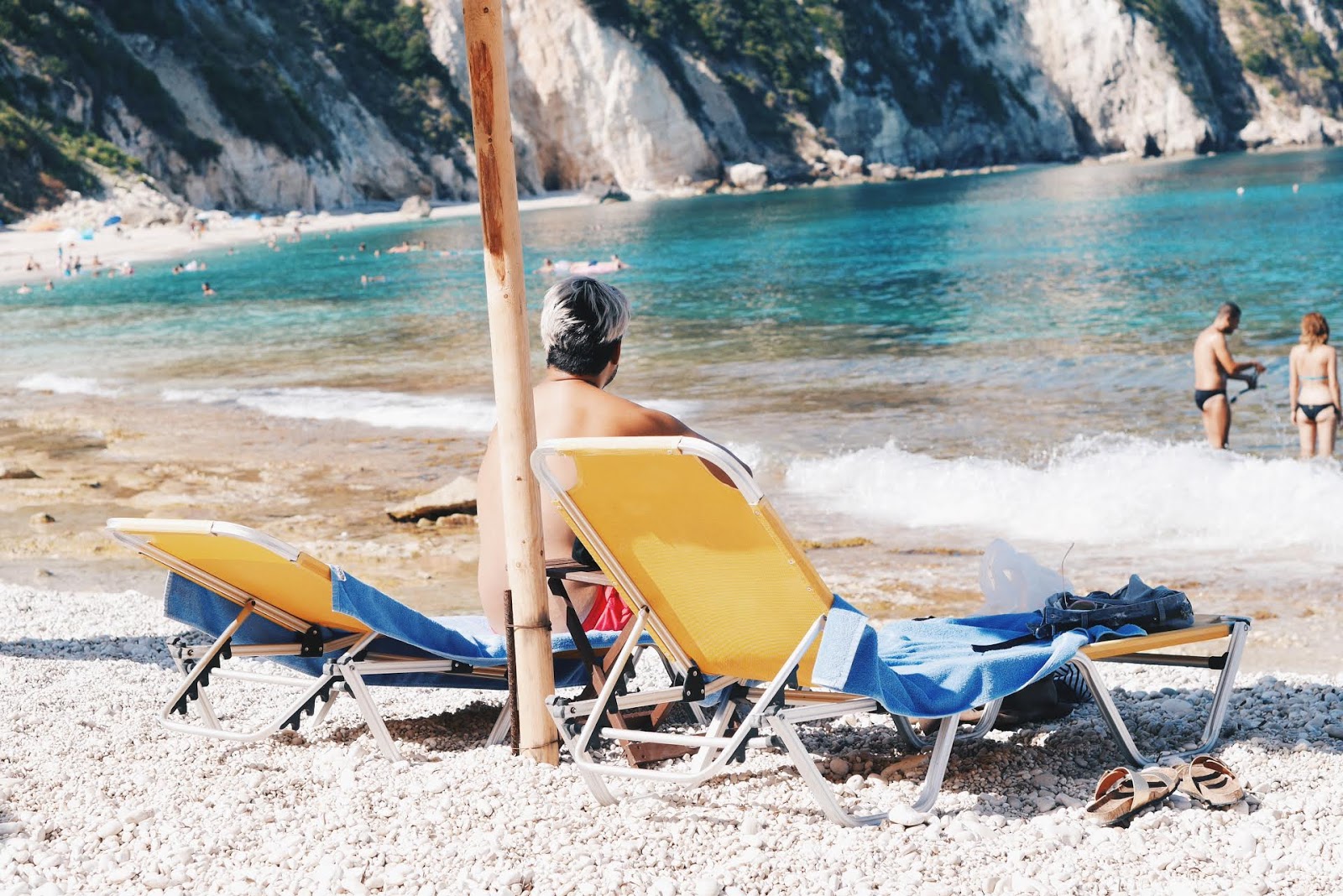 The sun loungers and parasol are 6 Euros for the day, which feels very reasonable, and you can get the bar to deliver food and drink down to whereever your lying. Burgers, Salads, Ice Coffees….you name it, they had it. As we were saving pennies we got a polystyrene cool box from a supermarker in Lixouri and filled it with ice tea, peach juice, beer, lemon Fanta and some crunchy M and Ms (why not? – a chocoholics gotta live). We joked that this cool box was Si’s holiday romance, he loved it that much, and definitely more than me. 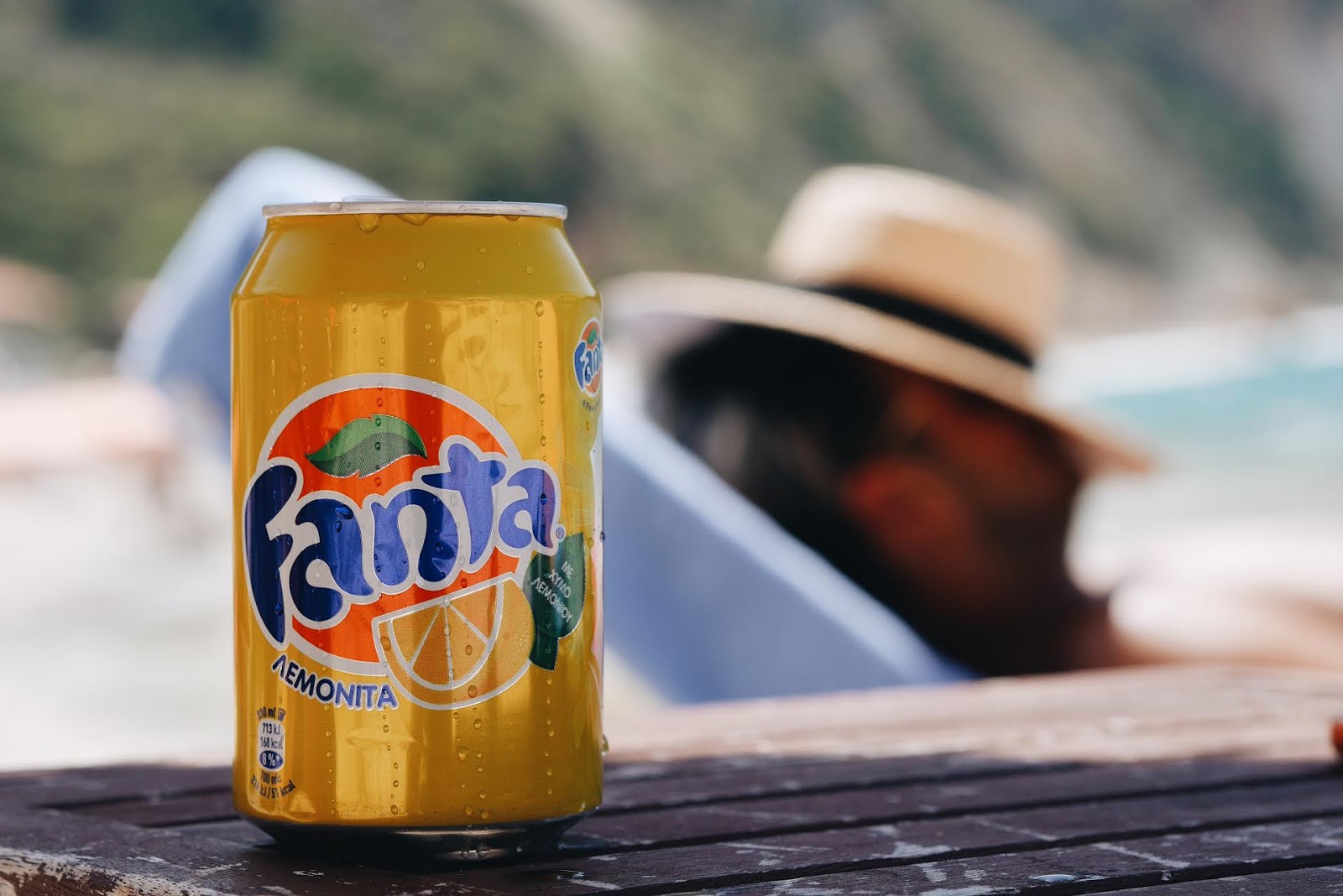 The pebbly beach is quite uncomfortable under foot, so I’d reccommend to people visiting Kefalonia that they purchase those wet shoes that you can wear in and out of the sea – not sexy, but you’ll definitely thank me. There was an unfortunate incident where I lost sight of Si, he went off for a swim and I couldn’t see him anywhere. I ended up running up the beach in a craze, carrying all of our stuff, and fearing the worst. I did my feet quite a lot of damage attempting to sprint the length of the beach. They felt incredibly bruised for the next few days. It turned out Si had swum to the end of the beach and was hiding in a little cove. Not so much the relaxing holiday at this point…. 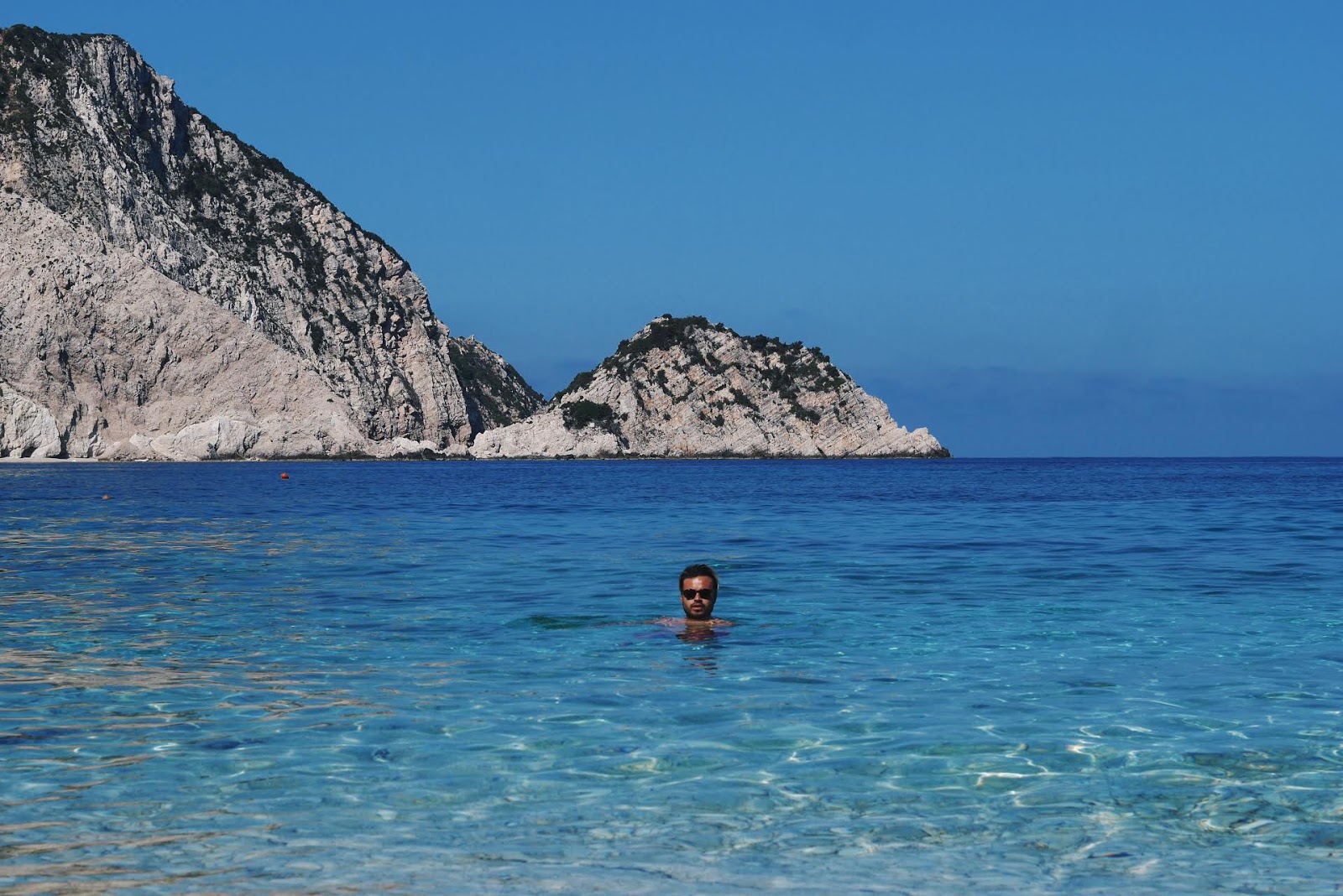 The water is incredibly clear here so it’s a great place to do some underwater swimming or snorkelling. After a short distance where you can touch the floor it does swiftly deepen, so thats something to be aware of if you are a poor swimmer (like me) or visiting with children. 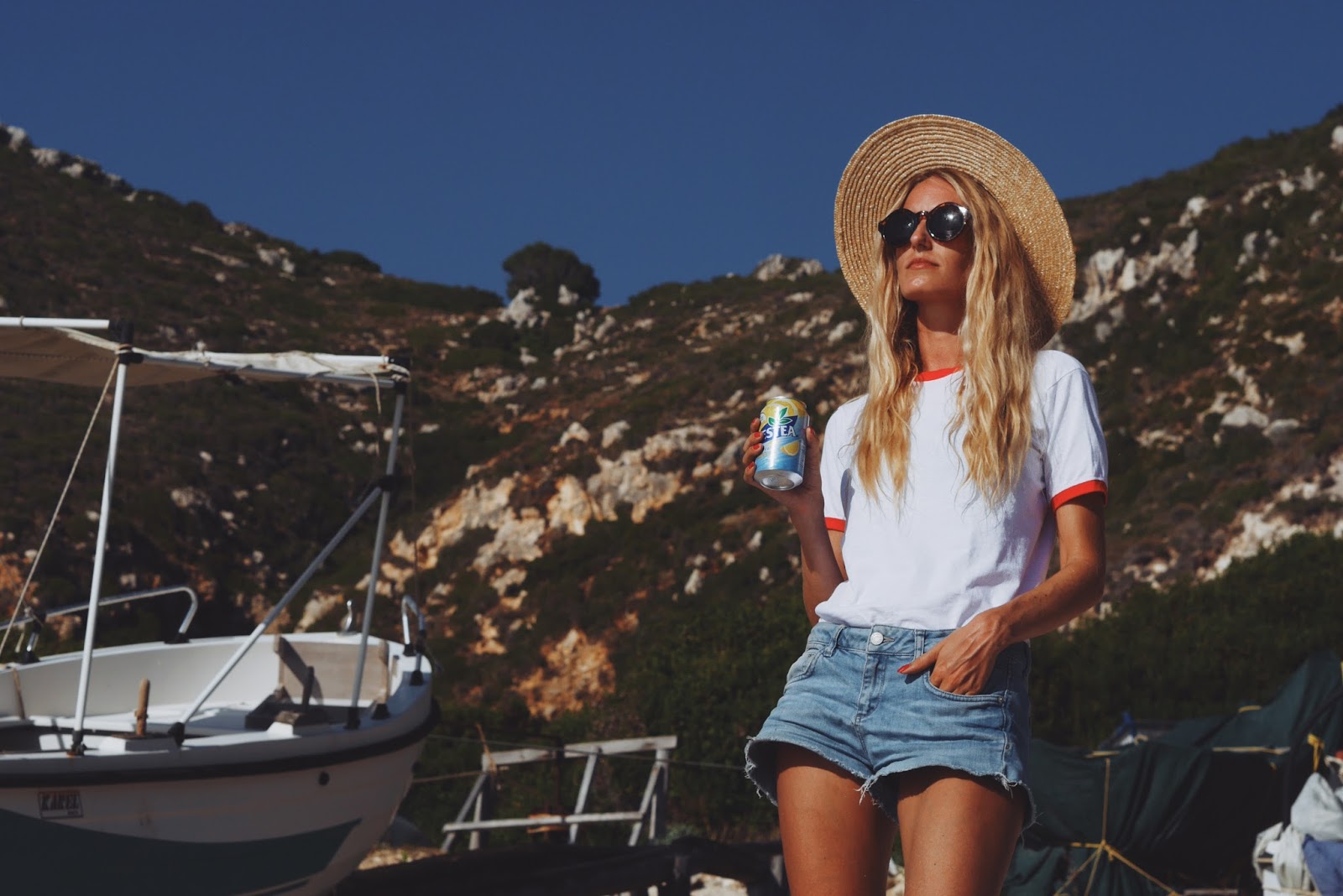 If you are a strong swimmer or happy to climb over some rocks and wood sleepers there is another cove directly below the carpark if you fancy a change of scenery, but unfortunately it’s not too secret and a fair amount of people had discovered this gem of a spot. 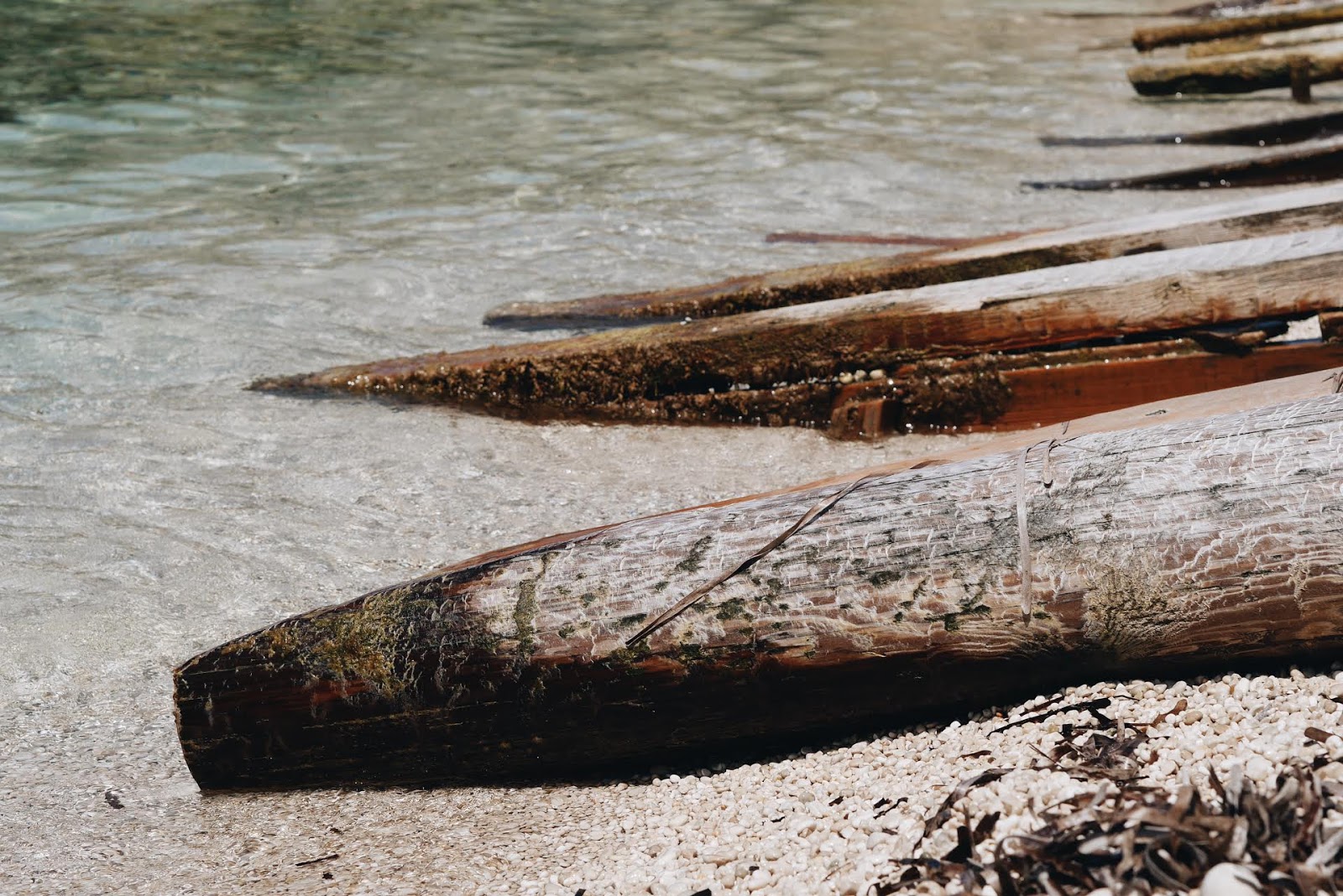 It tended to get busier the other end of the beach nearer the largest Taverna because that’s where the beach widens and you get a bit of sand as well as the white pebbles. It never got extremely busy or noisy where we chose to reside. 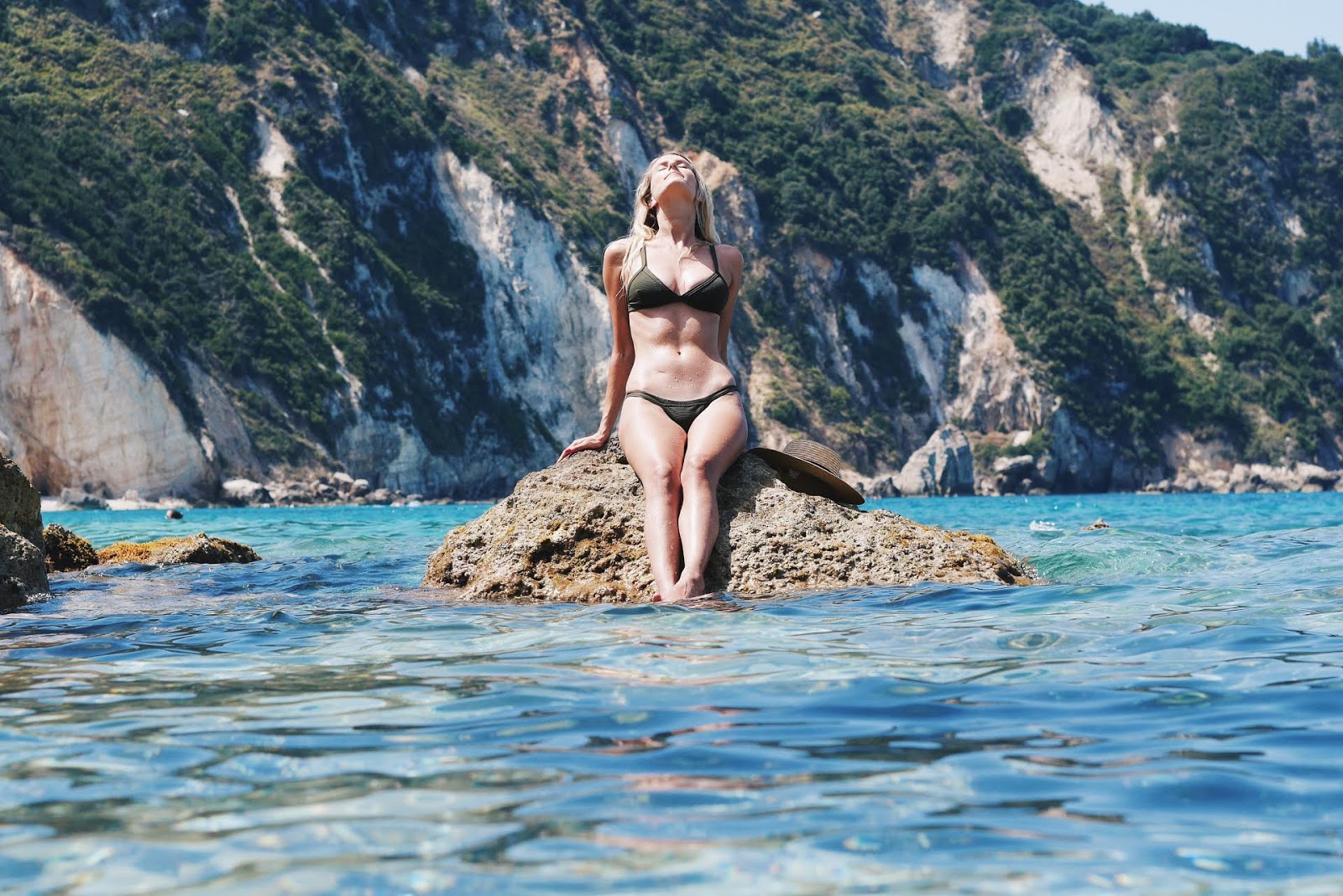 We ended up visiting this beach 3 times during our short stay in Kefalonia, so it is clear that it stole both our hearts with its beauty and fairly unspoilt feel. It was one of the places where I was able to look around and feel truly content in that moment. It’s the main location I lament about post holiday, and the place I dream of returning to the most. 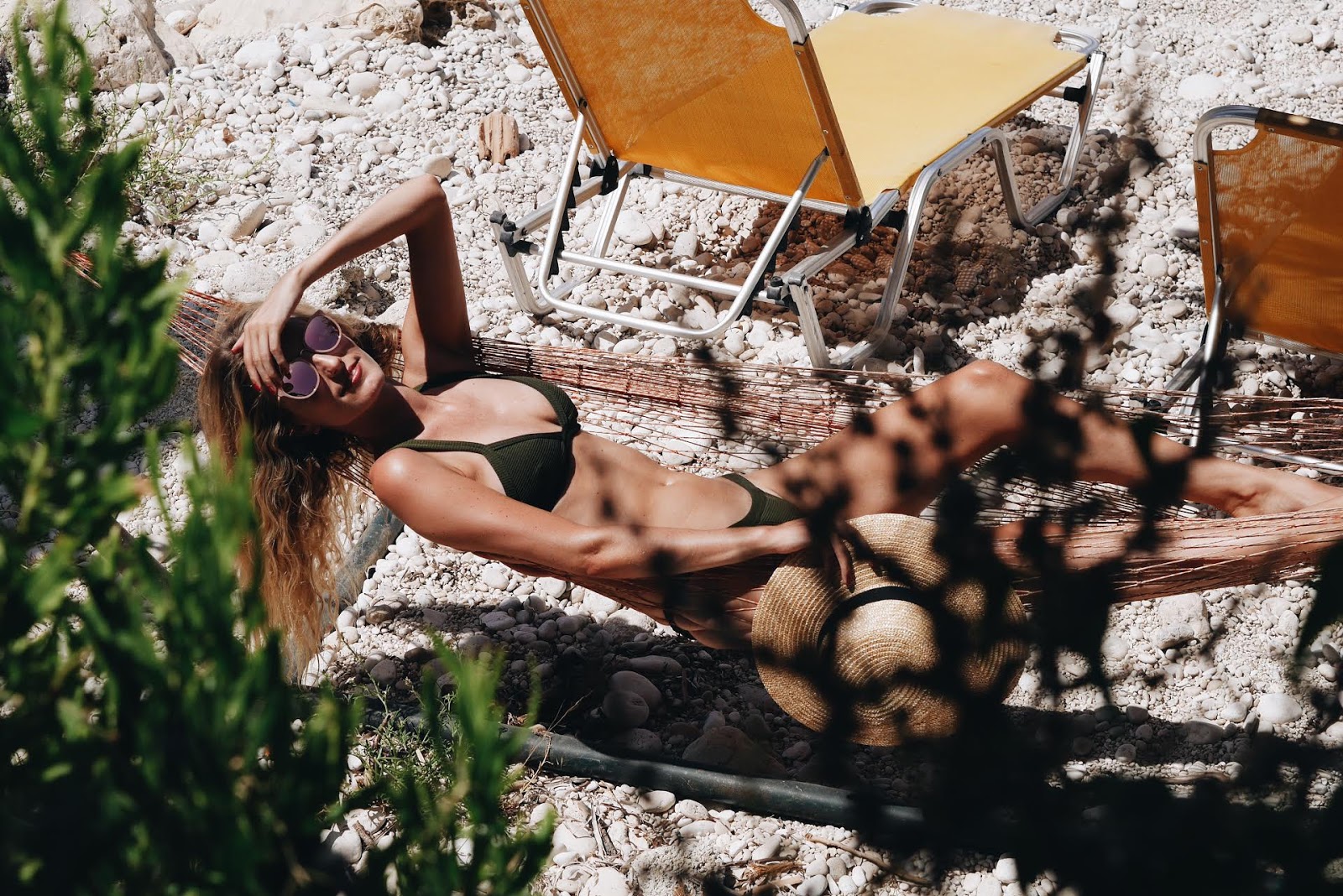 What one looks for in a beach is very personal depending on the type of holiday you’re after, so I’ll tell you about some of the other beaches we visited in some upcoming posts. 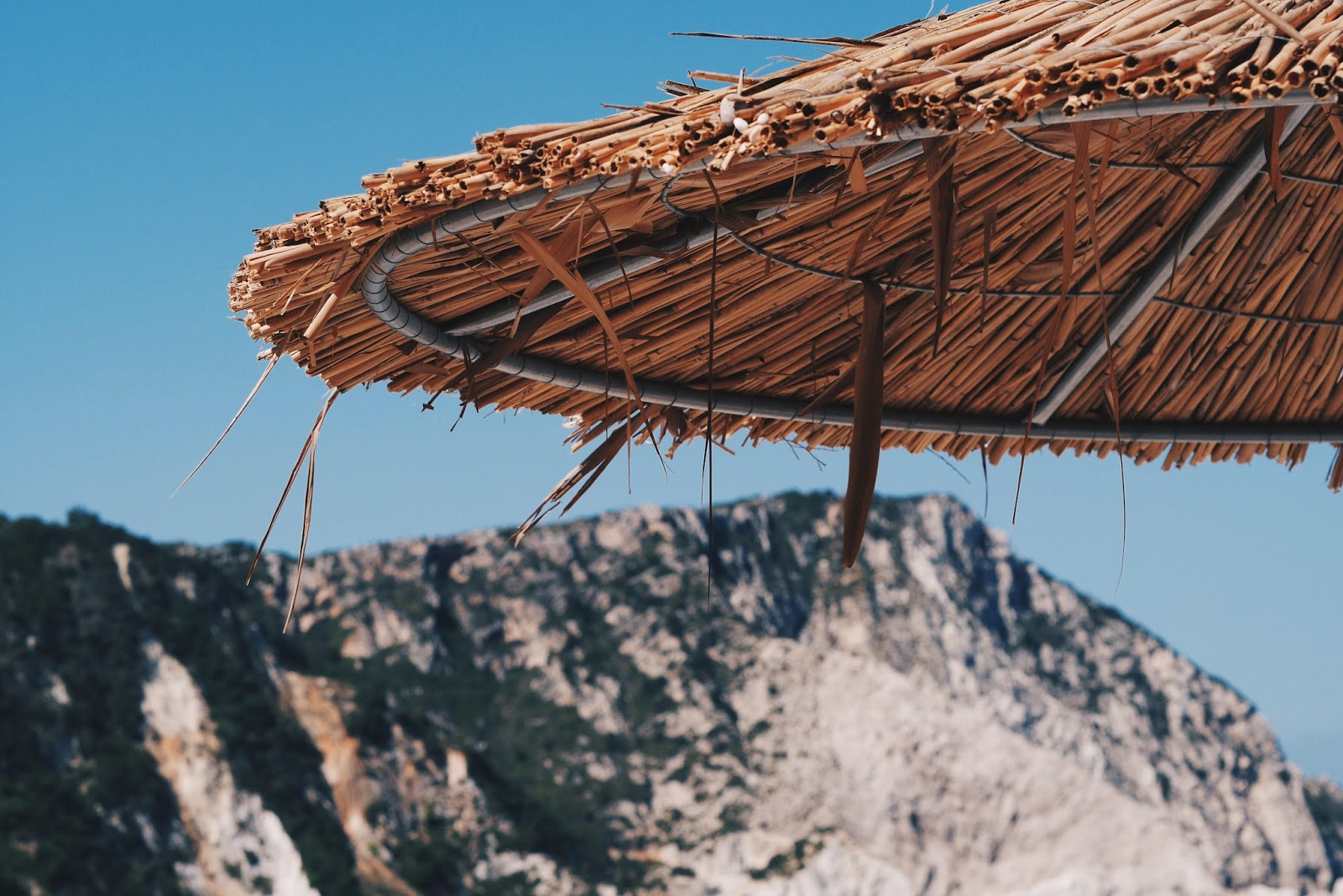 All pictures taken by us on the Panasonic Lumix GM1