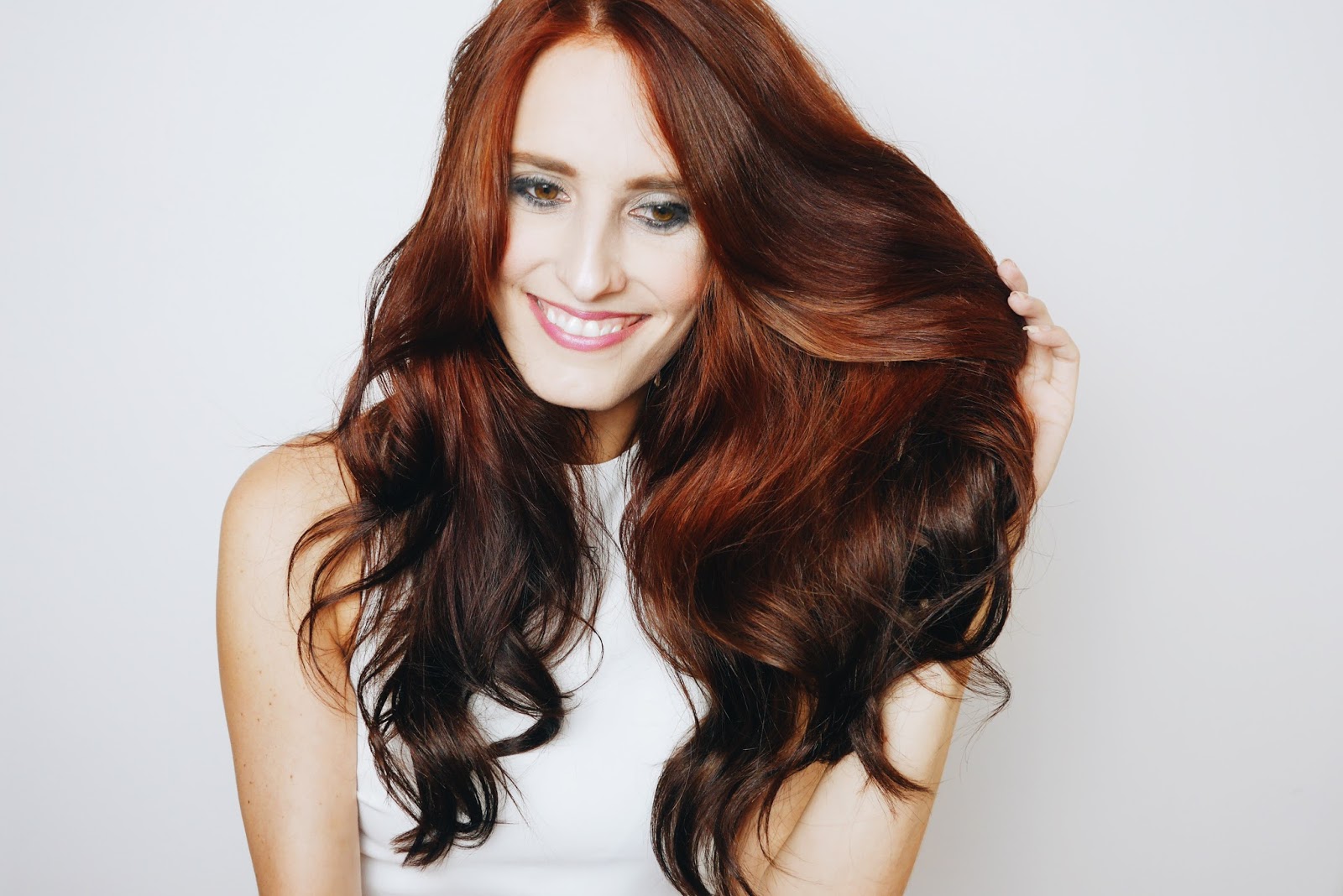 So the results of my transofrmation have been out there for a few days now, and I’ve been overwhelmed by the 100% positive reaction – all the lovely comments have blown my tiny anxious mind.

So, as you can see, I’m no longer a blonde. For me the old adage that blondes have more fun hadn’t been ringing true for a long while, so I decided to go for a drastic change.

Whenever you go through something stressful or traumatic you often feel an impulse to do something dramatic to your outer shell. I’m not sure whether it’s to signal a change, and hopefully the start of a happier new chapter. Perhaps it’s a way of shedding the trauma, as if the old you still had DNA from that period of your life, and that you would feel the effects of it untill you did something to rid yourself of it.

In my case, stress is an relentlessly on-going factor of my life, so I think I was looking for a change in my hair to effect my mindset in some way. Perhaps I’d feel different as a redhead and it would cause a shift in my being that would lead to positive results. Perhaps people would look at me differently, and therefore the opportunities that came my way could be more rewarding or plenty. 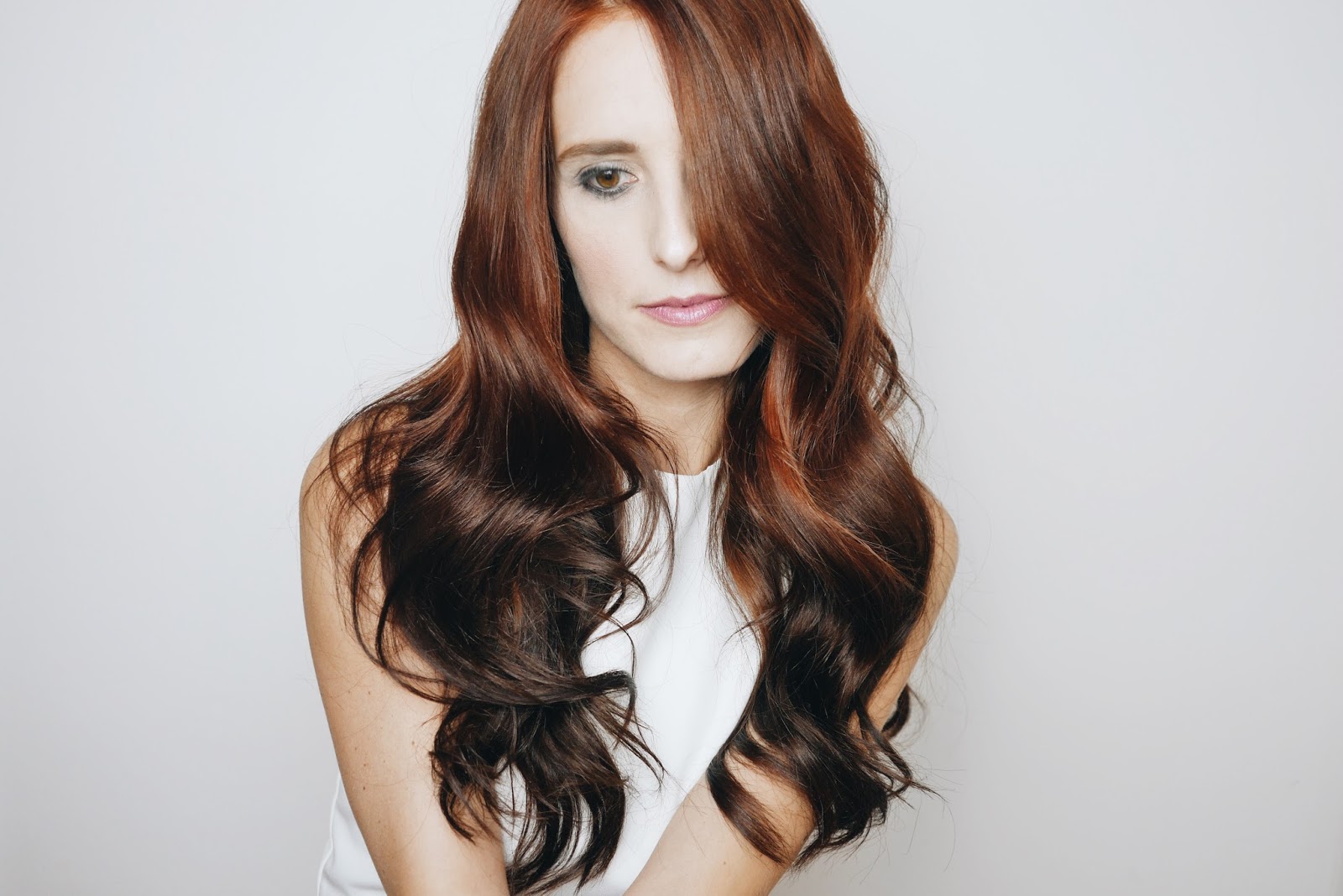 The words fiery are often associated with redheads too, and that’s a quality I wanted a bit more of. Most of the time I feel I have the word ‘Mug’ tattooed on my forehead. I feel like as a blonde people saw me as this wishy washy person that would forgive them of anything, however awful. Just before I decided to take the plunge I’d been let down on three jobs at the very last minute, which hugely inconvenienced me and meant that I had no money coming in this whole month. I didn’t get a sorry or real acknowledgement that they realised how hassle that may have caused. Unfortunately this is something that happens….all the time.

It sounds silly I know, but I do wonder whether they’ll see a bit more ferocity in my eyes with this new do. 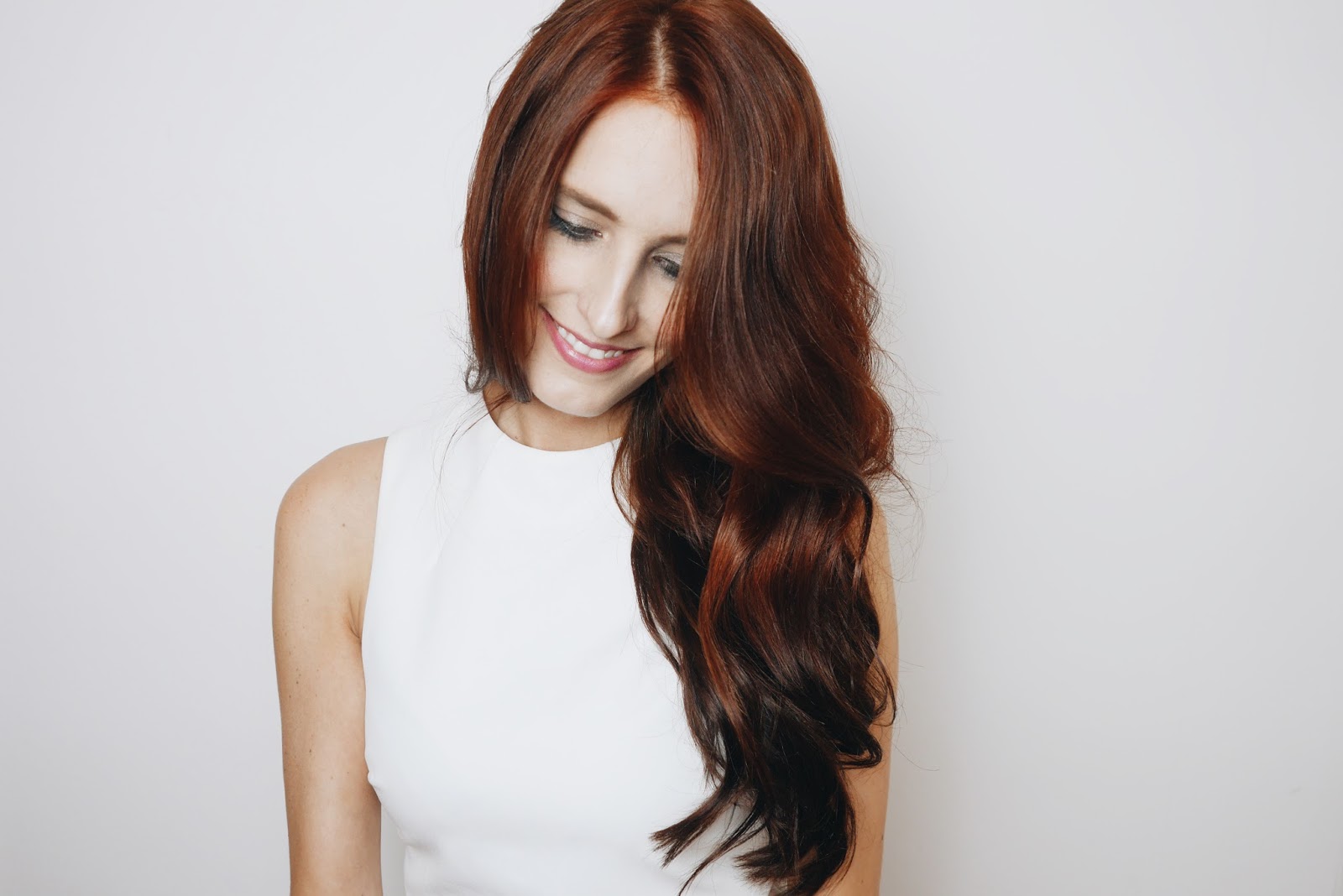 The colour I had in mind was a Shirley Manson style red. Not only is she a fab example of the type of woman I aspire to be, she has such a vibrant and punchy shade that gives any outfit the wow factor.  It.s that sort of ginger that is as bright as it can go with it still being accepted as a natural shade.

I sought advice from Adam Reed – of Percy and Reed – who, with the help of L’Oreal Professional did my wonderful denim transformation earlier in the year. I wanted his honest opinion on whether it was possible and more importantly whether it would suit me. Having put me at such ease when I went blue I was hoping we could work together on this makeover, but he’s such an in demand hair genius I was unable to arrange before Monday’s film premiere, where I was hoping to showcase my new look. 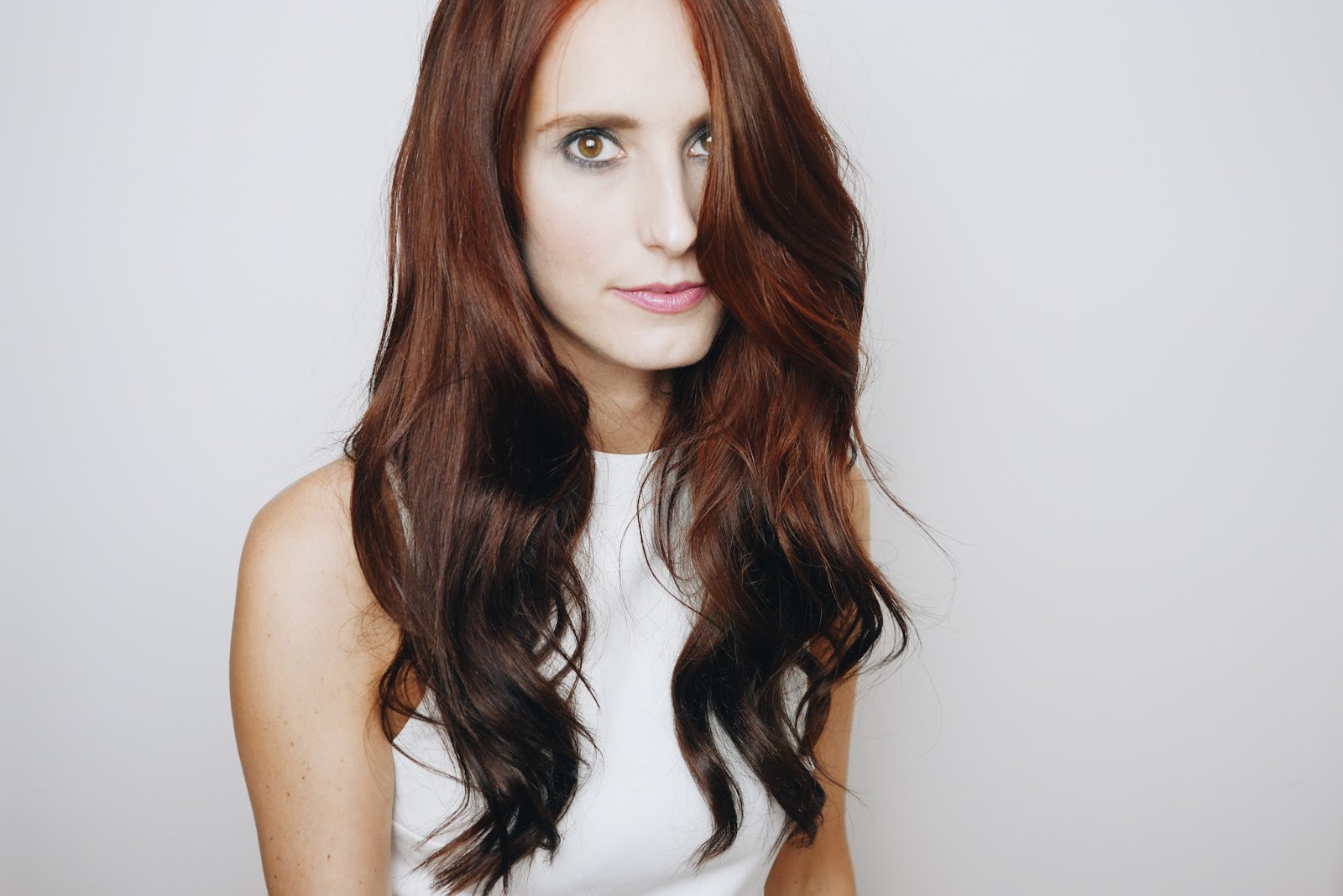 My friends at Bleach London were also fully booked so I decided to take a risk and go to a local salon in the village of Oatlands, that I haven’t gone to for more than a decade (and never for a colour job).

I called up and told them what I was after, and I’ve got to say I was slightly taken aback at the price. It was going to be be between £100-150. People how regularly get their hair coloured won’t be shocked by this price, but due to my lack of funds I only do my hair when I have the luxury of mates rates or by doing reviews of salons.

But I had a bee in my bonnet, and was determined to get it down that day. I went on to rationalise my decision by reminding myself that the boost it will give me will make it an extremely worthwhile investment. 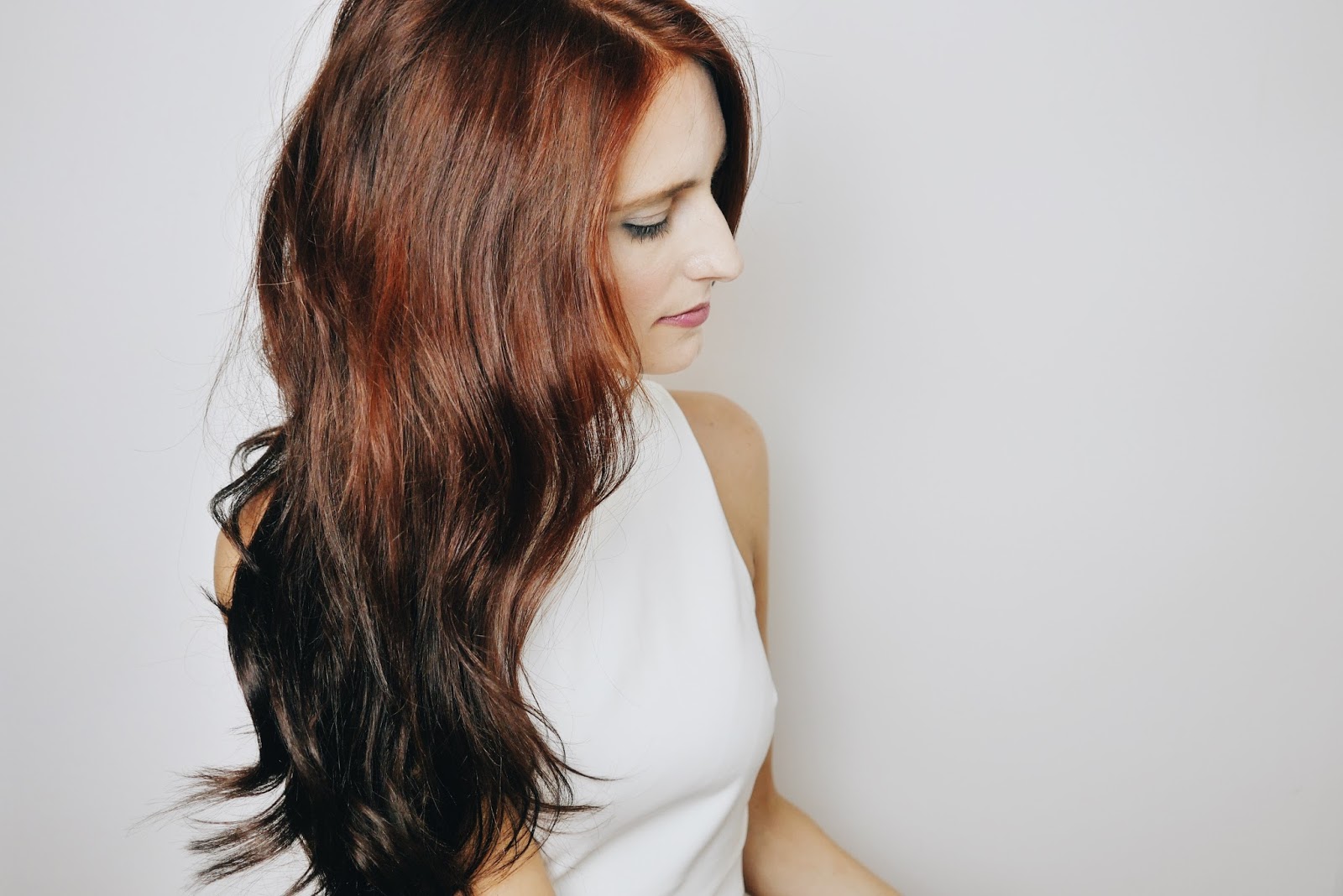 Being excitable and eager I arrived there early, or so I thought. The reception tells me I’m half an hour late, and she’s not sure they’re going to be able to complete the whole job anymore. I felt my chin start to wobble and my eyes start to sting. I clearly had invested a lot more of just a visual change in this appointment in Headmasters.

Luckily the walk in client that I had taken my spot was requesting something that wasn’t possible, so I was able to take my slot back and start my consultation with my colourist Beth. 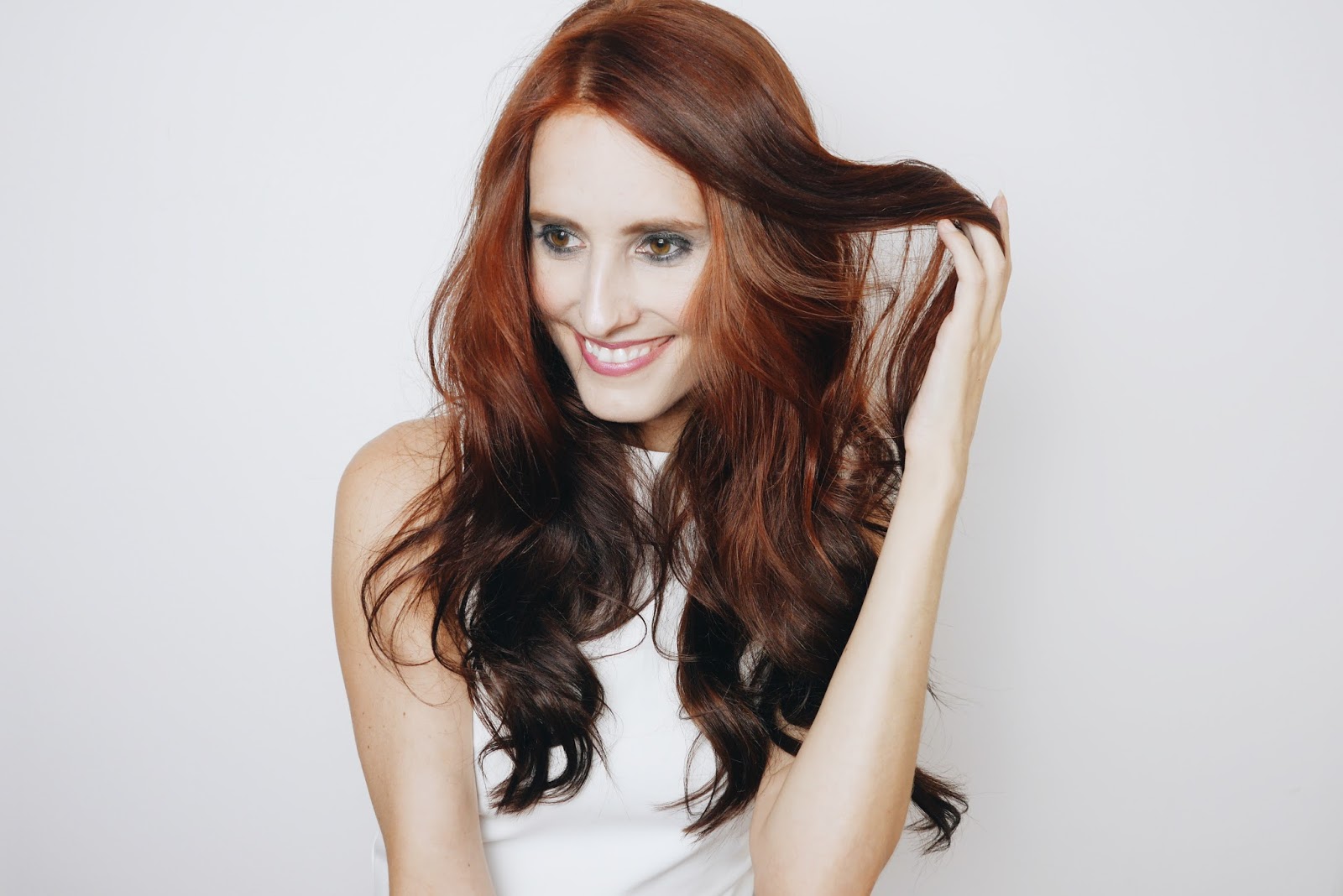 I showed Beth my gallery of Instagram and Google image redhead inspo shots and she told me the ways in which we could achieve this, which used the words ‘permanent.’ Panic sets in. After my chat with Adam, and becase of my past experience, I had thought I could go ginger by applying a rinse over my existing colour. I thought I was going to get my usual highlights redone, to get ride of my roots, then a ginger shade put over the top which would leave me with streaks of different intensities of the red. The beauty of this being that it woulde fade fairly quickly, and I could decide to top up if I wanted or wait untill it returned to my normal blonde. 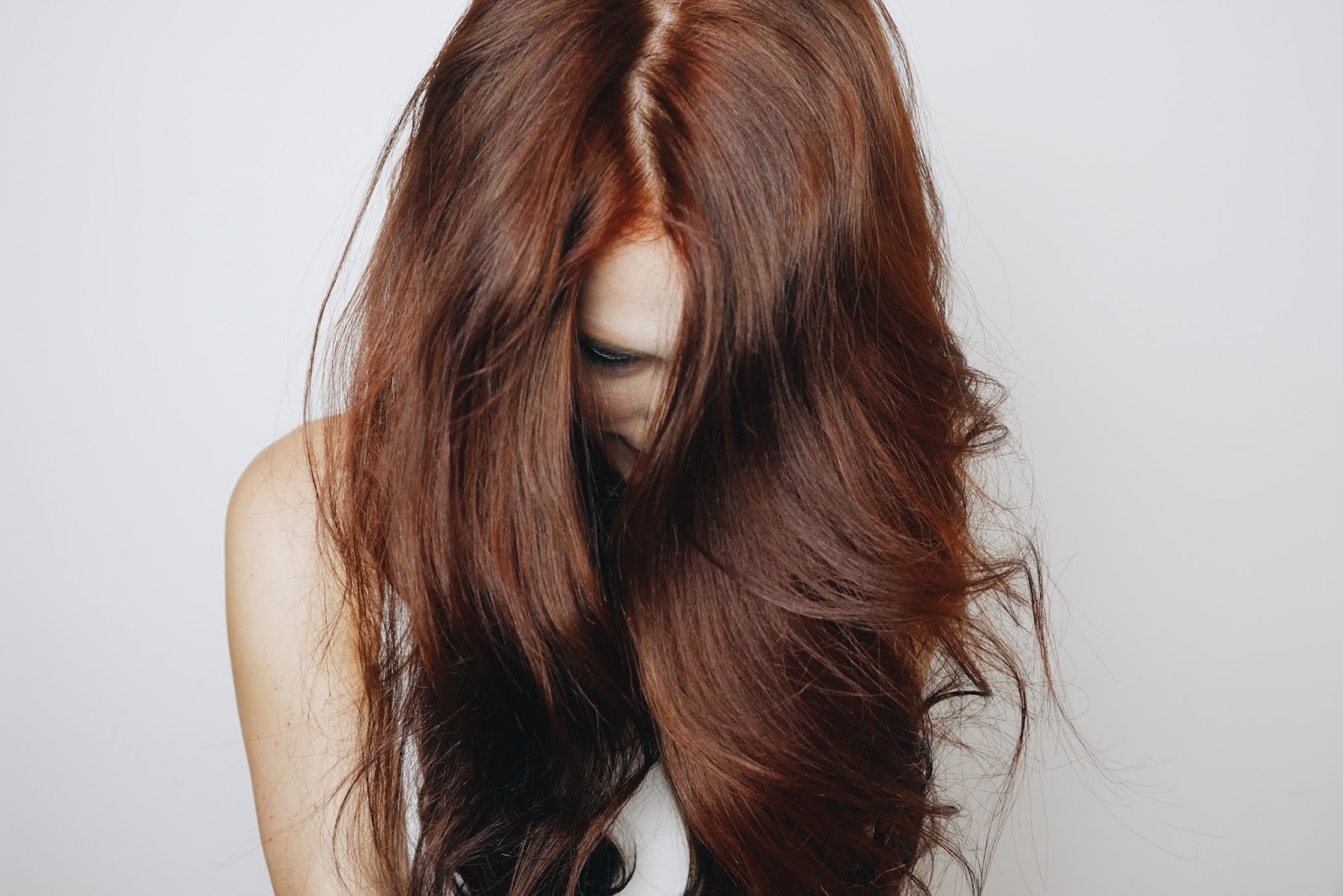 Beth informed me that using their rinses would mean the shade would last a very short amount of time and we would not be able to achieve the colour I was desiring. To get that punchy red I would have to strip my hair to one even colour, the colour of my roots, then put a permanent colour on top. She then showed me her colour book and the selections of gingers they do. 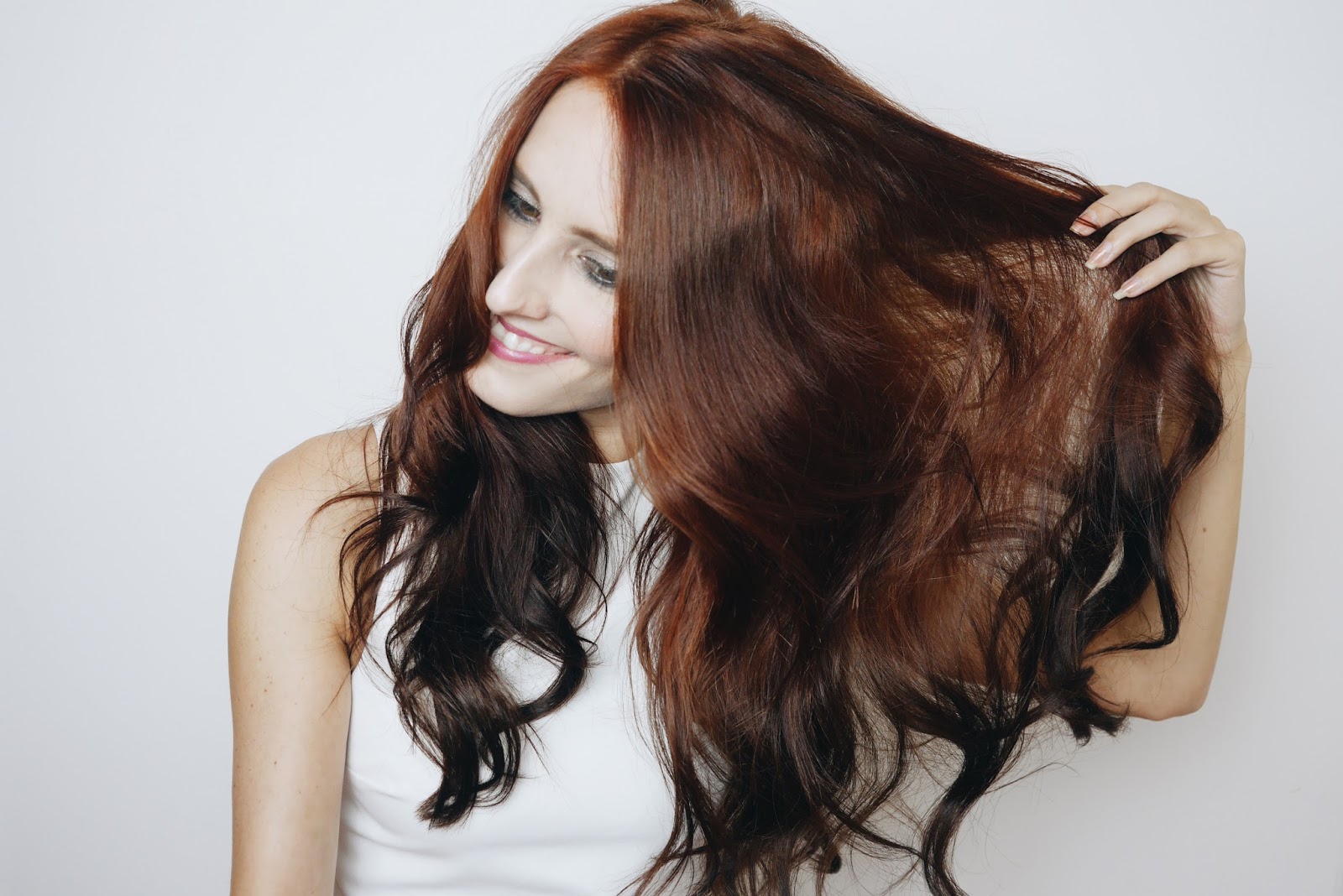 I have NEVER gone for a permanent colour on my hair (one that’s different from my natural shade) so I ummed and ahh’d for a while, coming up with different and less scary suggestions for Beth to consider. I must have seemed like the nightmare customer at that point, poor girl. Having suffered a huge disaster in the hands on a chain hairdressers before I think I’ve become over cautious about things.

Beth came up with another solution which would create a drastic change, but not have the same level commitment, and that was the use of a gloss. I really appreciated her patience and willingness to take on board my worries with her process, and I felt confident her route was the correct one for me. 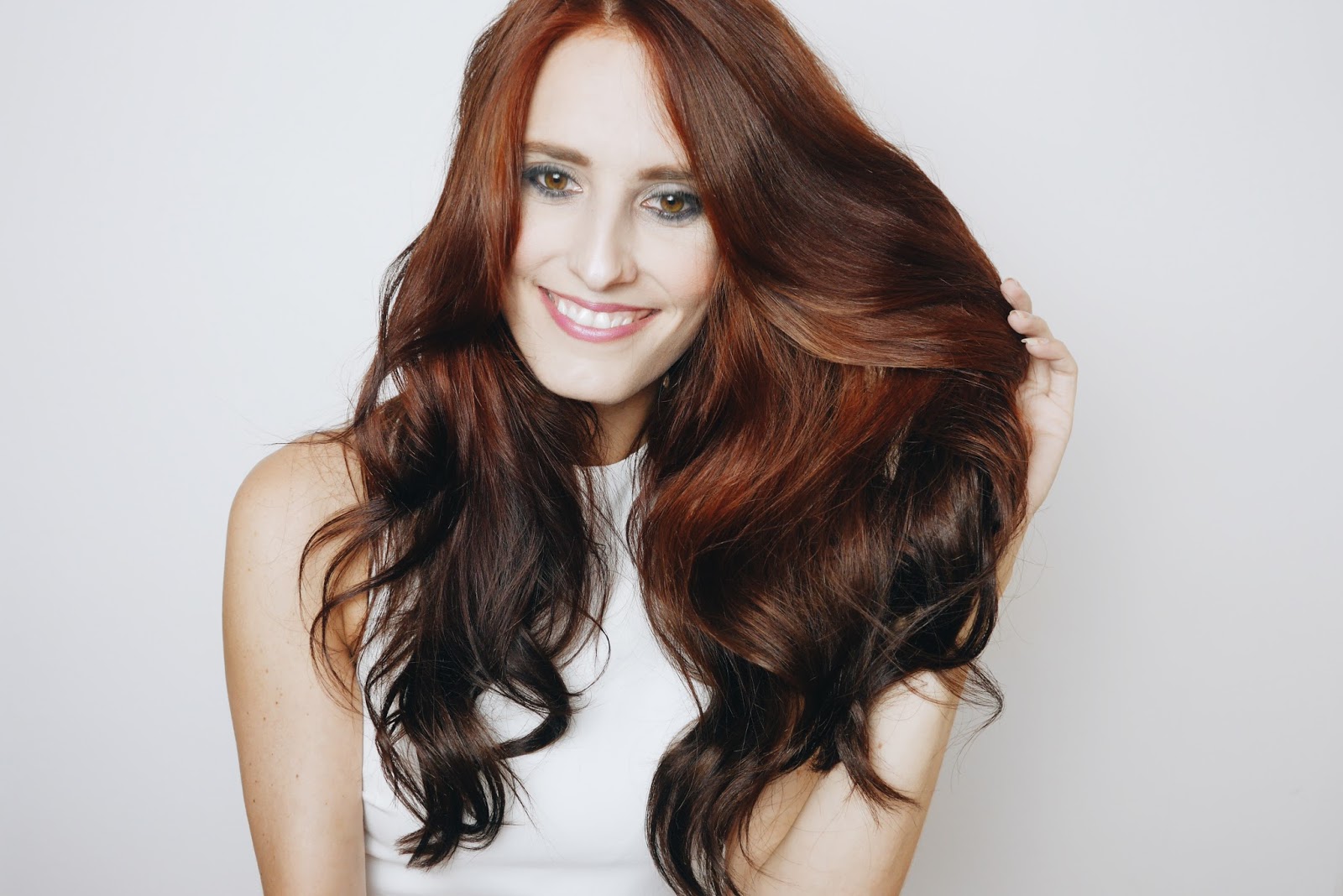 So first up to get rid of the blonde in my hair to leave me with an even brown base for the red colour to go on to. It was crazy seeing the blonde disappear from my head within a matter of minutes. The time went even faster because I was engrossed in reading an interview with Zayn Malik in Elle Magazine. 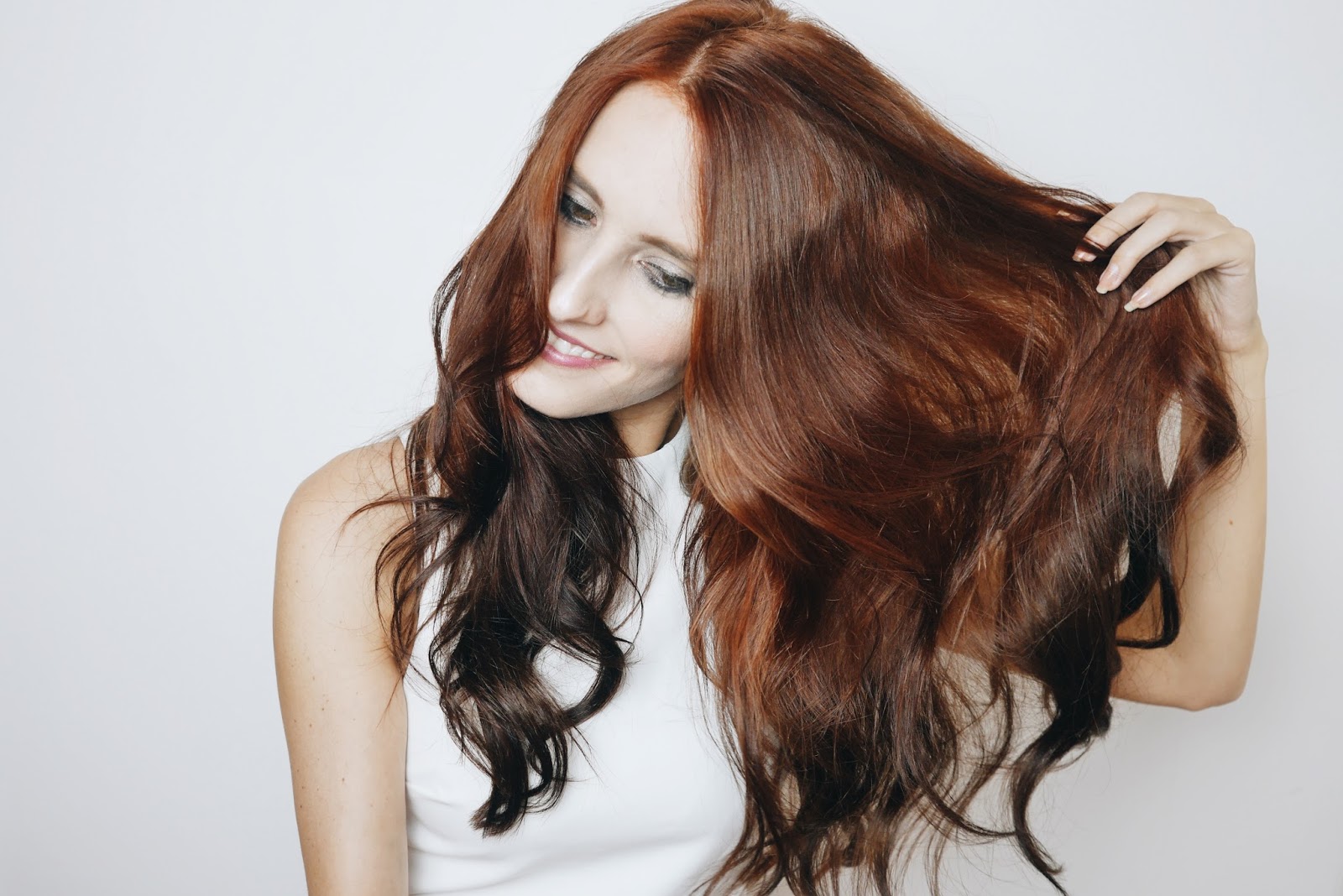 This was actually a very useful part of the process, because once dried I could see what I would like as a standard brunette. One of my exes had always wanted me to be a brunette but I refused out of principle – ‘you’ll have me as I come. god dammit!”. I always associate brunettes with being sexy, sophisticated, exotic and glossy but I looked so drab and boring, it just didn’t suit me at all, so I know I will never go for that look. I envy all you brunettes who look so fabulous! 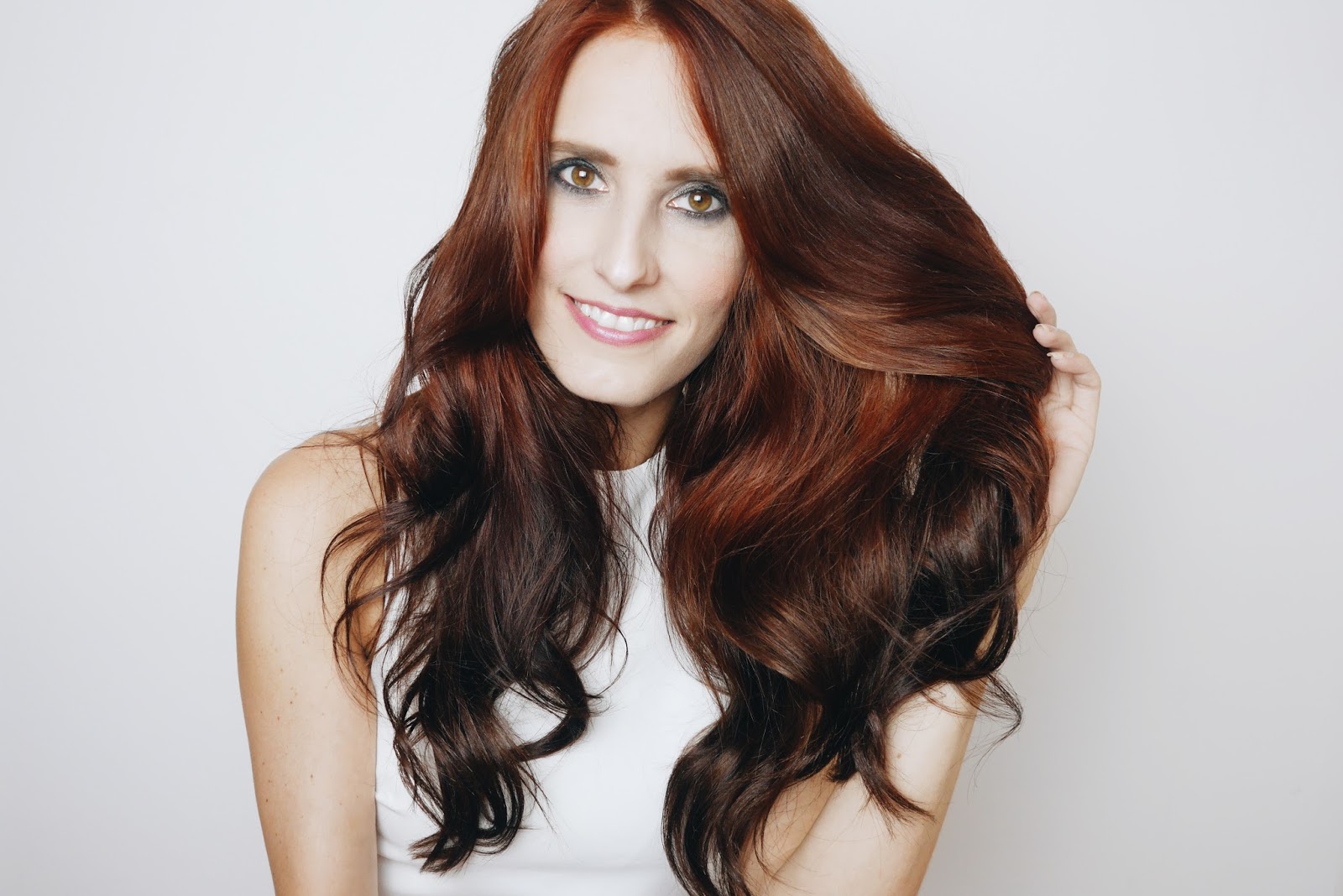 So next it was time to paint on the gloss. It’s always quite diconcerting when the colour is first painted on because it doesn’t look anything like the final colour your aiming for. But after a while you see it starting to change, and the inner exciteable squeeling happens. I could see my roots starting to flame up with colour, and I was already feeling invigorated. 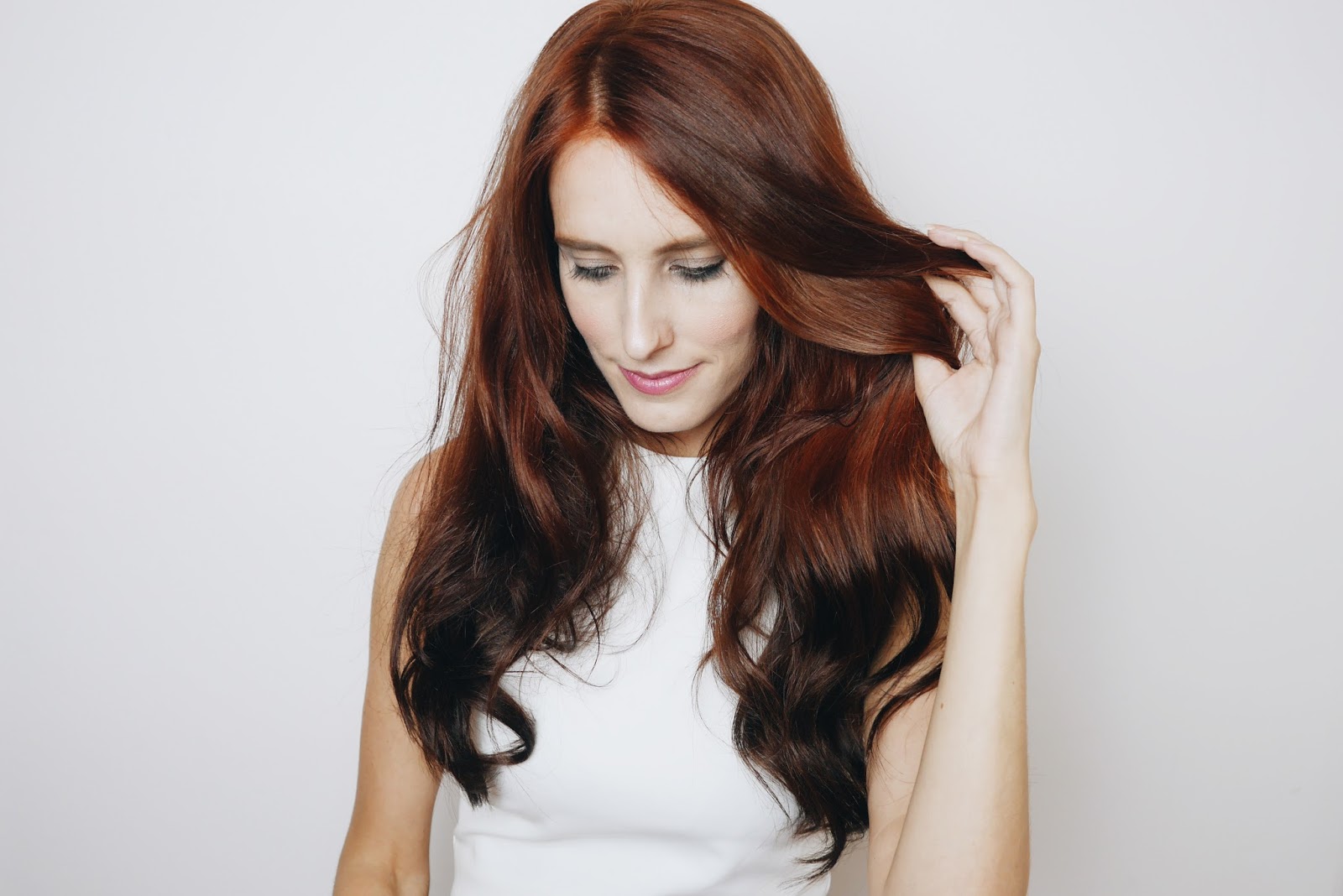 So after some more drooling over Zayn, who is frankly young enough to be my stepchild, it was time to rinse off the gloss. I was treated to a glorious head massage, while being massaged by the chair. It was almost too much pleasure to deal with if I’m honest. Luckily I was brought right back down to earth when it came to brushing my hair. Apparently my sort of hair is the worst for tangles because each strand is thin, but I have a hell of a lot of strands that like to get involved with eachother. 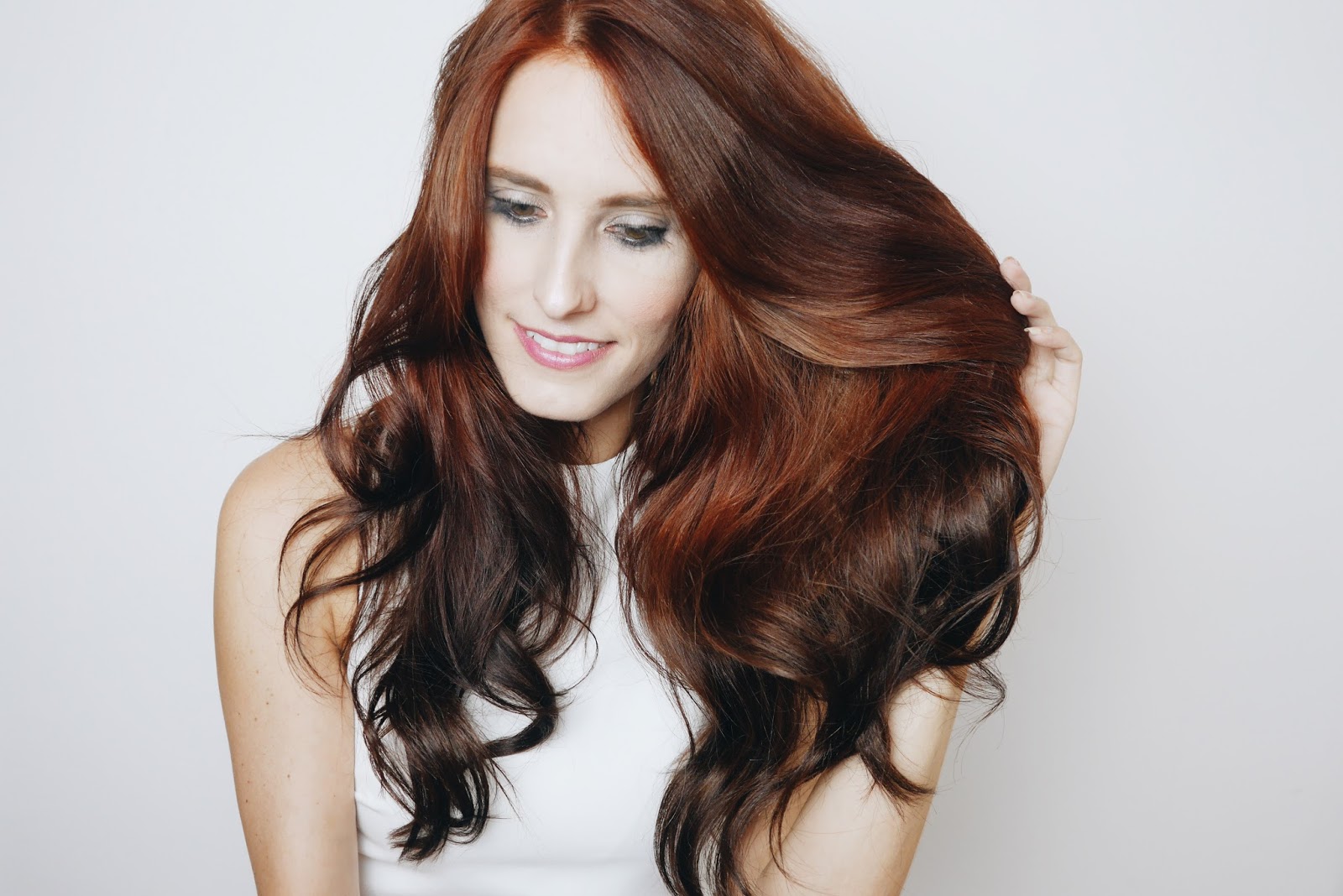 So now for drying, which is when you actually see the real result of the colour change. I couldn”t believe how glossy it looked, us blondes aren’t used to having such shiny locks! I knew at that moment I was pleased with the results. However, I will admit I was slightly shocked at how dark it was because I had come to the salon envisioning a punchy ginger and this was more of a maroon winey shade – but I actually think this suited me better. When I brought up with Beth that it was darker than I had wanted she told me that it would likely lighten with washes, and that you only get that brightness with the permanent colours. So if I wanted to be braver and go lighter I could come  and go for that next time. 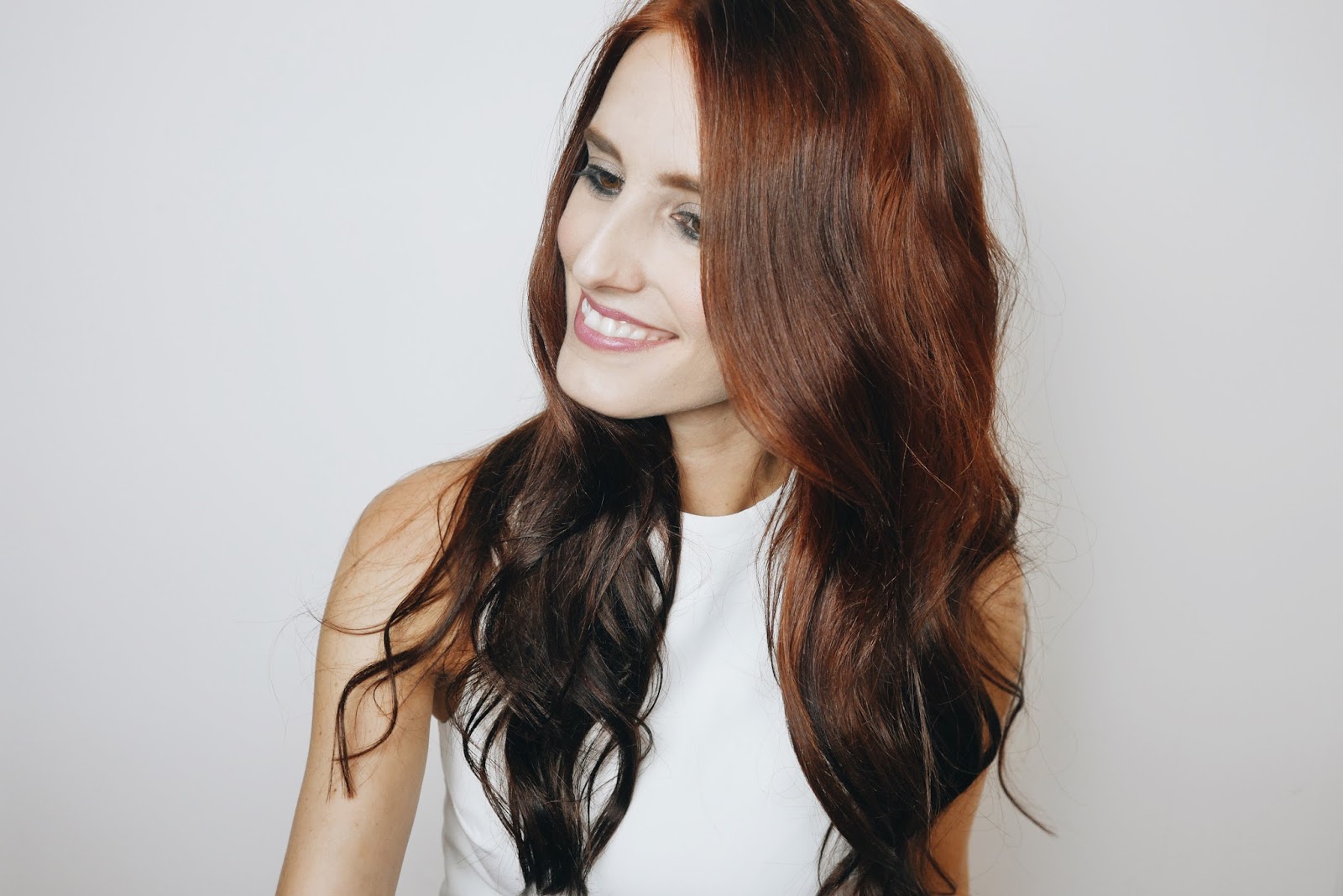 We went outside with the mirror so I could see what it looked like in day light and adored how it caught the light and looked alive and vibrant. Living with it for a few days I love how different it can look in different enivironments. When I film it looks like the fiery ginger I originally wanted, in photos it looked like the colour of Merlot, then in dim light it looks like a rich and warm mahogany. 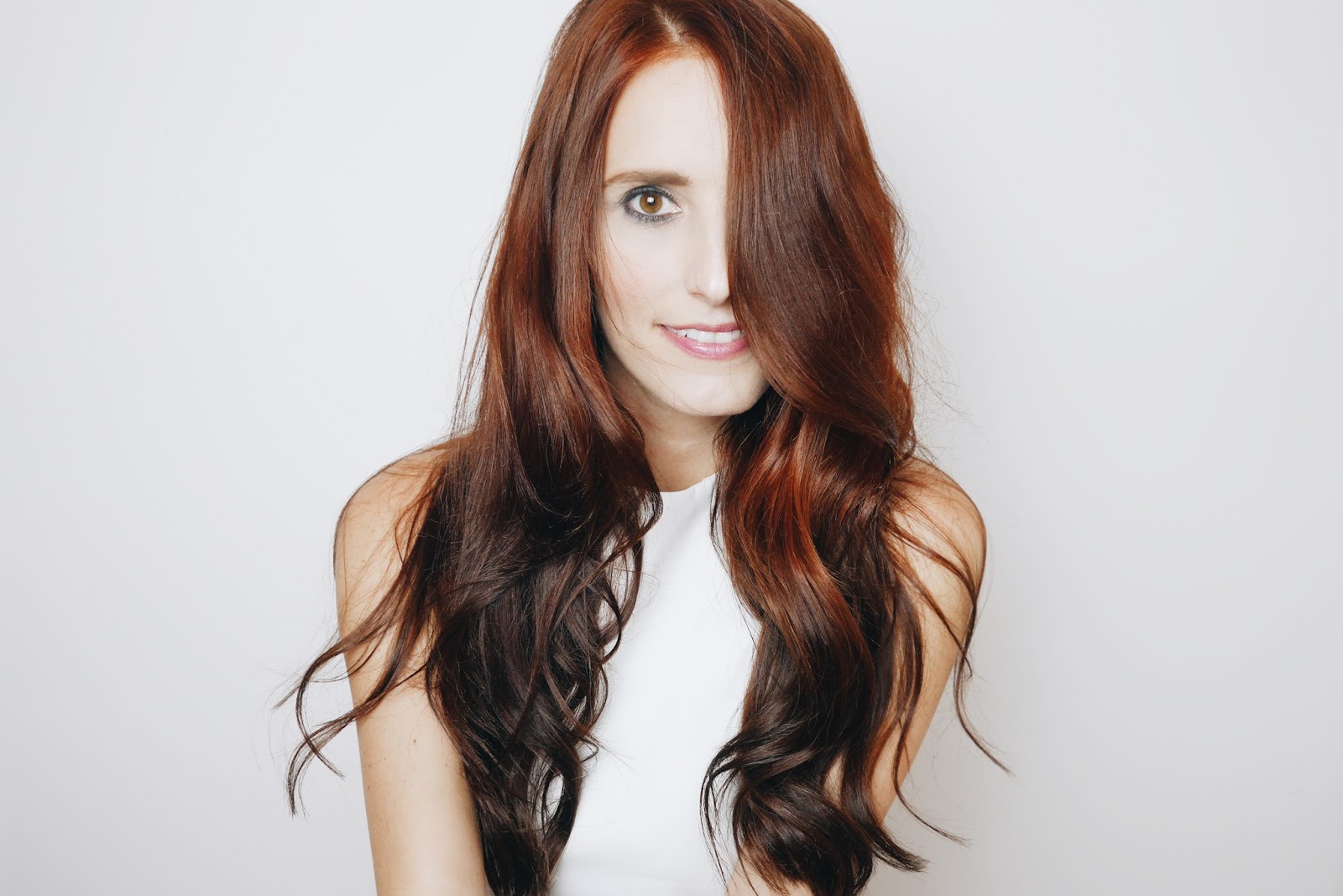 When sitting in the chair, while Beth kindly trimmed my bitty ends, I couldn’t stop gorping at myself, mainly because I didn’t recognise the person looking back at me. When other people in the salon came over and said how much better it looked, I felt comforted and even more excited about this new me. Despite my relief at the results, I still felt a sense of unease as I wondered what my unnervingly honest parents would say…and the rather direct and to the point YouTube commenters… 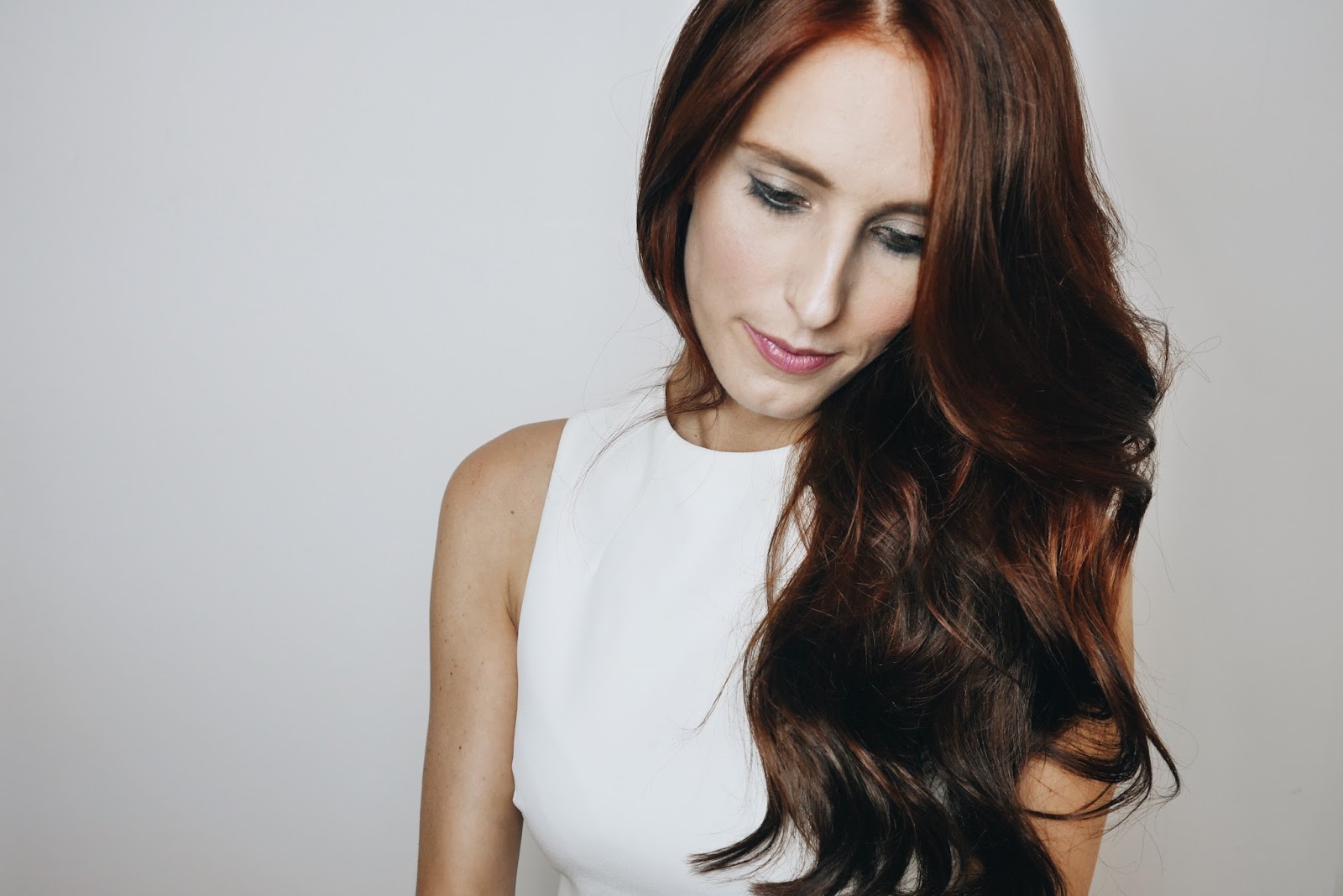 So when I walked in to the house there was definitely a look of shock on both of my parent’s faces, but as I walked into the light and swished my hair around a bit they seemed to warm to it fairly quickly. When they said they liked it, they seemed genuine, but they did say it would take a bit of time to get used to…you and me both. One day mum did say I wasn’t her little sweetheart anymore, which hurt a little bit to be honest, but when I thought about it I realised that was probably a good thing.

I now feel like I look like a woman, not a girl. I don’t think this is just about the colour change, I think it’s to do with the way I’m dressing because of it, and the way I’m carrying myself. I feel rejuvenated and I think I’ve used this visual change to shift myself into a new era, one that I hope will lead to a happier and more successful version of myself. 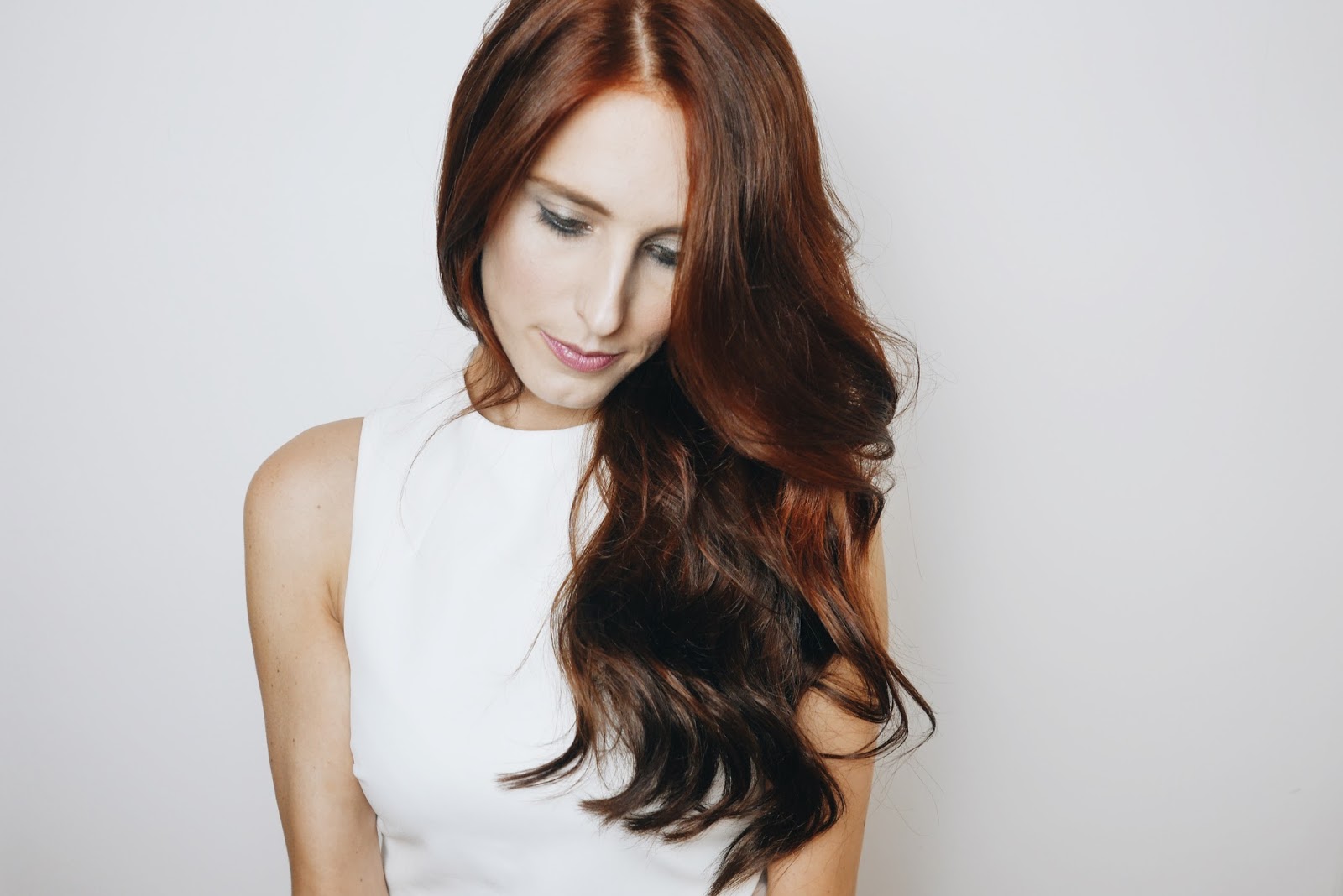 Thanks to Beth from Headmasters Weybridge for the tranformation, and not just for your handy work when it comes to my hair, but for your support and patience during the process.

Also, I must tell you guys that because of the change of plan, and because they signed me up to their club, my new do ended up costing way under £100! A bargain…

Now guys, I just need your advice. Shall I stick with this colour, or get the brighter orange next time I go back to Headmasters?  Let me know in the comments!