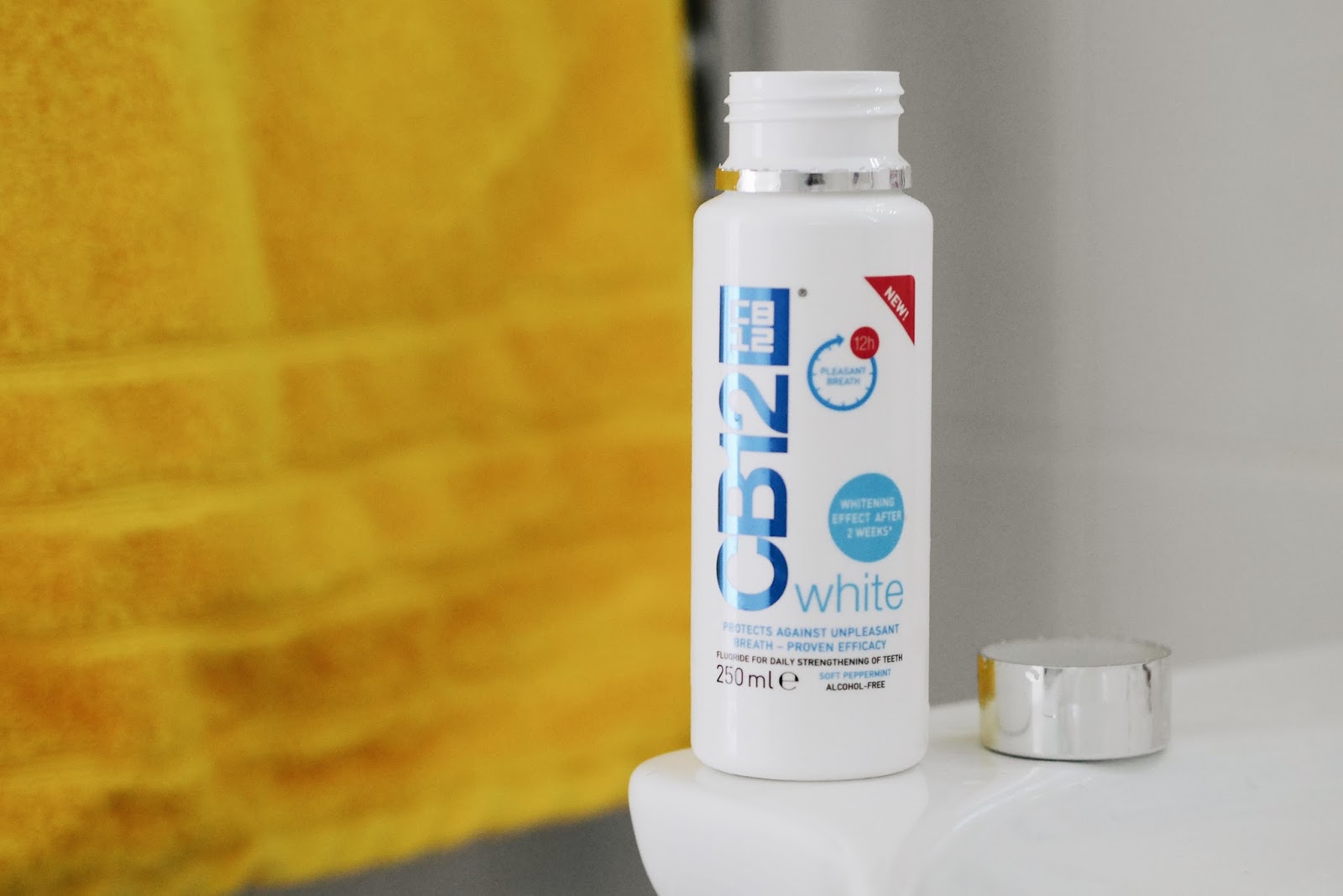 Guys, this isn’t the sexiest of posts, but you should be used to this sort of content from me by now…If you’re new to this blog, then be prepared for some unflattering over-sharing.

There’s a lot of aspects of my being I worry about when out in public, many of which are reasons for my preferred hermit state. I worry about my acne ,which has a sixth sense for knowing when I really want to look my best and decides to puss all over it. Then there’s my IBS, which makes the prospect of travelling on underground, attending any events with loos that require extensive queuing, or doing anything really, a pretty stressful. And Ironically stress makes it more likely of a code brown situation. Then there’s things aside from bodily functions and ailements, the things that you only have youself to blame for. Those moments that keep you up at night, replaying in your head over and over like a recurring nightmare. The incidences that still bring a flush to your cheek and nervous rash to your neck when you recall them a decade later.

The research by CB12
First Class Breath has uncovered the average Brit experiences a cringe
worthy situation seven times a month. Potential employers make us feel
most uncomfortable when meeting them for the first time (31%), followed
by first dates (19%) and our partner’s parents (12%).

If I’d be included in the survey I would have raised that 7 times a month figure considerably. In fact I feel like more of my life is cringe-worthy than not. In fact, amongst my friendship group the freqency of my mishaps has become renowned, and they are the retold whenever we get together but also whenever I’m introduced to someone new. ‘ This is Sophie, the one that took of her short in Art class myy accident’. ‘This is Soph, who once put her hand in dog poo then waves at her crush.’ I’mdreading the day I get married, because I’m pretty sure the speeches are going to be a hefty reminder of my life of embarrassment.

While us Brits will do anything
to avoid these wince inducing situations, over a third have recently made a sweat
inducing “greeting faux pas” – including forgetting someone’s name when
introducing them (43%), going in for a hug when the other person
expected a handshake (25%) and even kissing someone on the lips by
mistake (15%).

I once accidently kissed my friends Grandad on the lips – something I was never allowed to forget. At a gig once I thought someone was familiar so assumed we were old mates and started communicating with them as if we were. It was only later on I realised they were a very famous person, and due to take the stage. Then there’s the time I went for a job interview and had a Rachel Green from Friends moment, and ended up giving them an unwanted kiss. Did I get the job? That’s for me to know….. 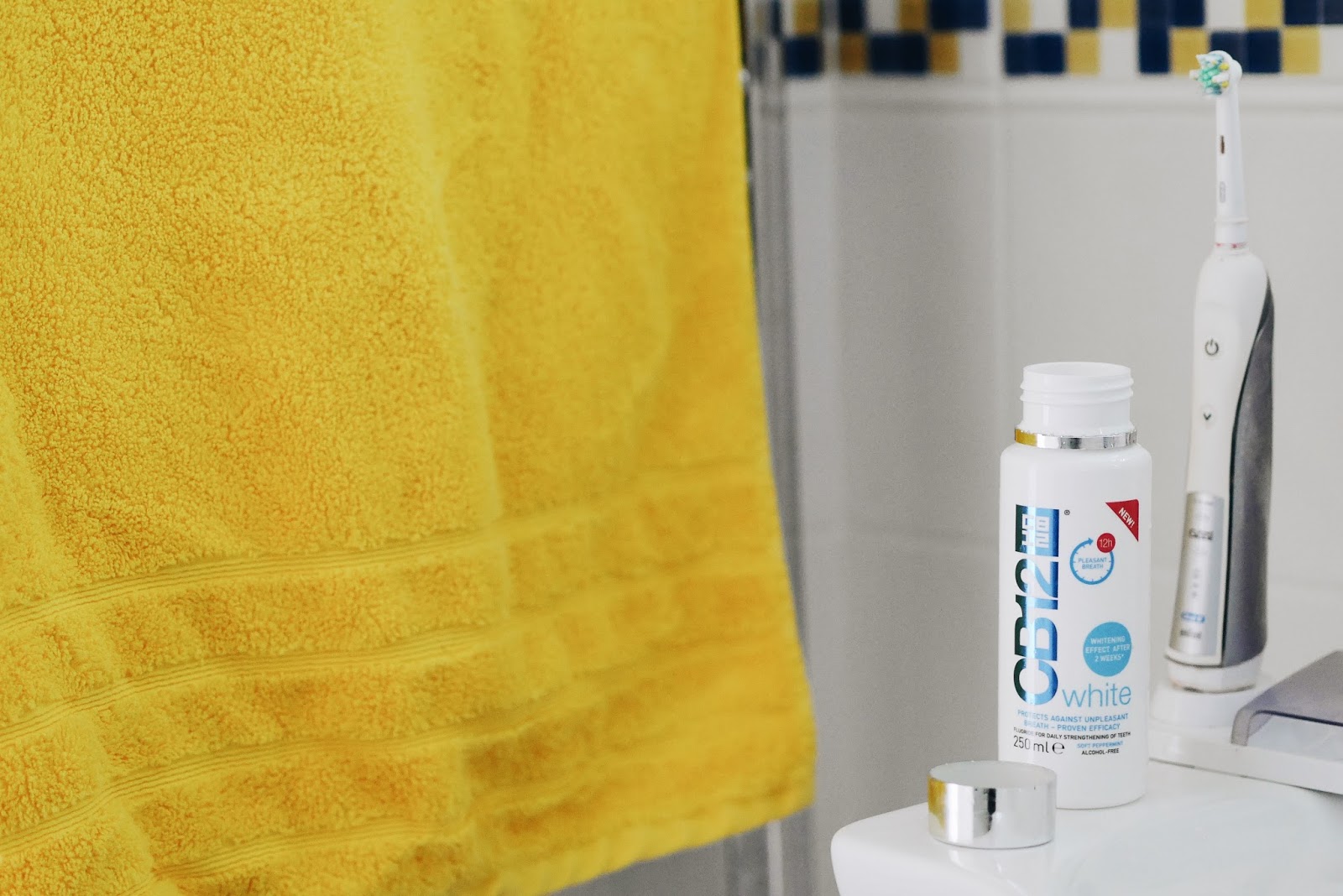 And when we’re not worrying
about overcoming a social error, we’re thinking about our appearance and
hygiene as over half admit to worrying about their body odour – 45%
even said they were conscious about their breath in social situations. And this is something this product can help us with…

As you know I suffer with CFS which aside from the logical symptoms…tiredness, lethargy, painful and aching muscles/joints (and about a hundred other annoying things) there’s also the more obscure ones. Everyday I wake up with horrible green mucus in and around the mouth, including being stuck to the roof of my mouth. It’s so ghastly I often have to scrape it off with my fingers and waddle to the bathroom (rather creakily) to spit it into the sink. I know this doesn’t make for pleasant reading, but honesty’s all I got, so I am going to run with it. 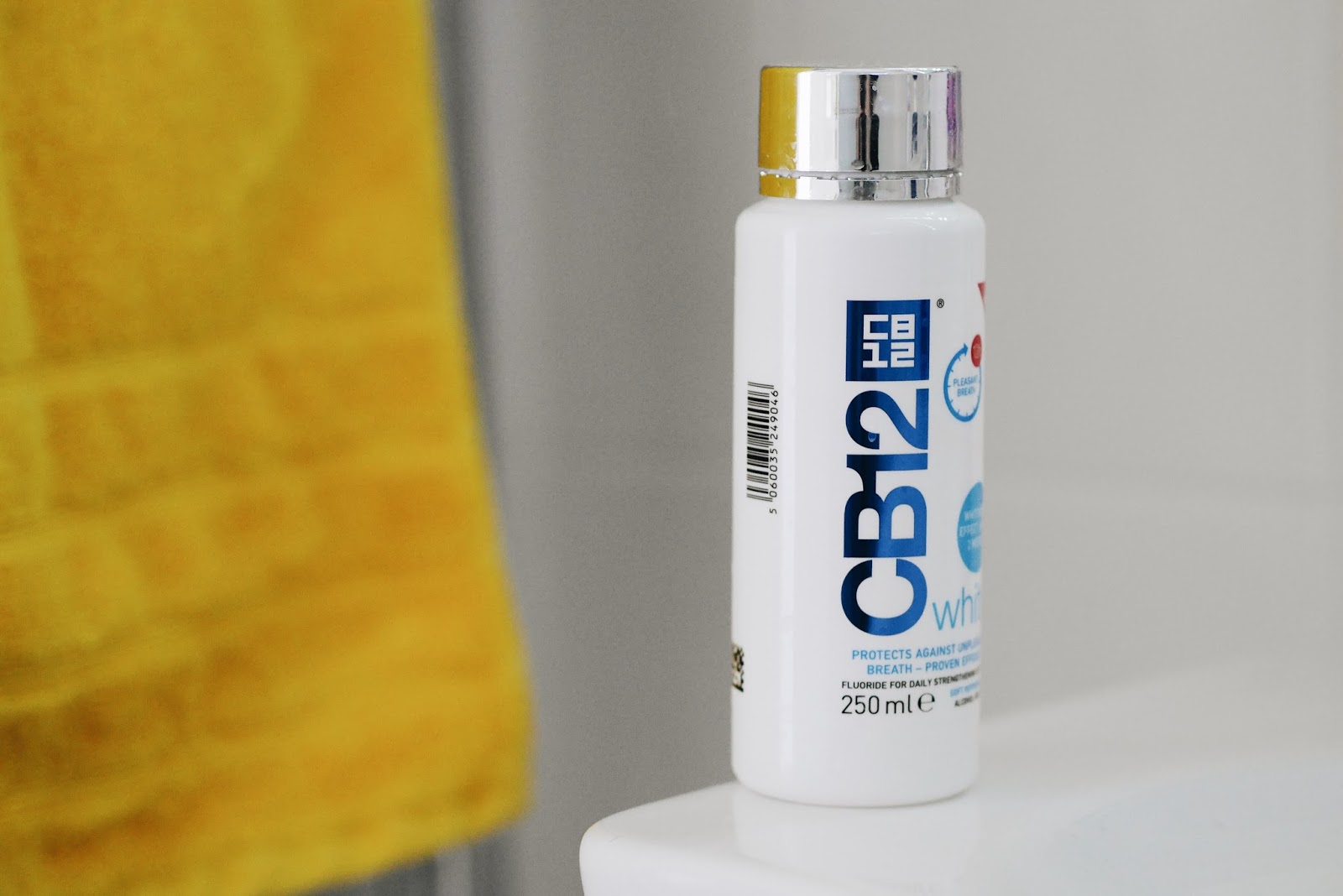 I was reading up on this online (you have to do a lot of your own research as GP’s are still largely in the dark about this illness) and it seems a lot of CFS sufferers seem to have issues with their Sinuses, some of the problems caused by Polyps that block the healthy flow of mucus. This is something I need to investigate further, but in the meantime it would be nice to improve one of the side effects of this, which is rather unpleasant breath. Sorry about typing the word mucus….

I also suffer from an intolerance to Salicylates which only compounds the issue. When my levels are too high in my body I become very reactive, so as well as having the skin rashes/breakouts and severe IBS, I also have a very sore mouth. My tongue in particular becomes very sore. They used to say it was geographic tongue, but mine has become more severe, with gaping valleys appearing in it’s landscape. I’m pretty sure this, on top of the previous issue, means that my breath has a tendancy to be unpleasant. 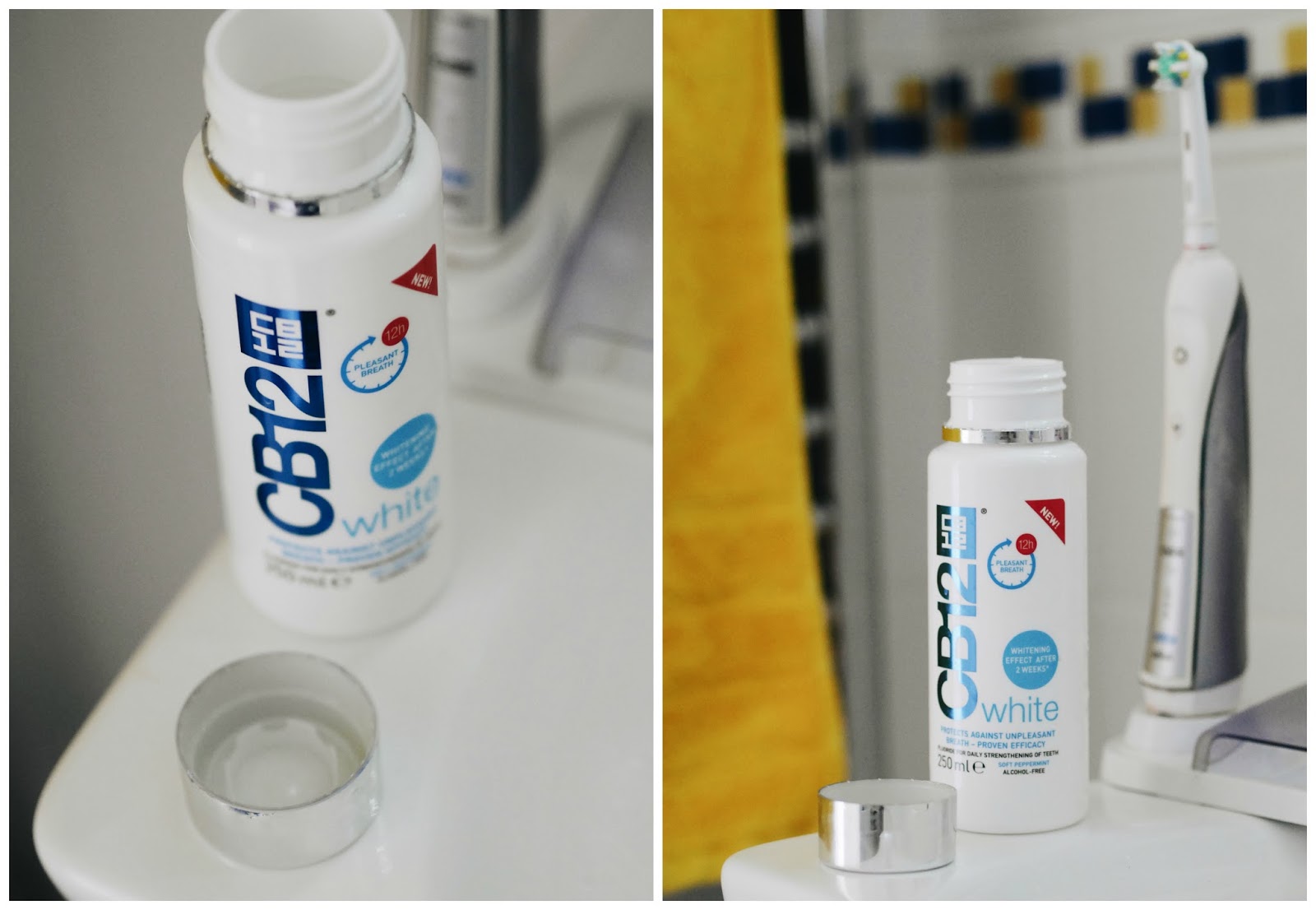 Having been with my partner for 5 long years. we are passed the stage of politeness. He’ll tell me if he doesn’t like my make up (he did it a couple weeks ago actually, apparently the blue eyeshadow was ageing), he’ll also tell me if he doesn’t like my outfit, and he’ll most definitely tell me if my breath is a bit (or a lot) stinky. Usuually he’ll just say I smell like a petrol station or bin, and on the most part it’s in the morning when he too smells like a compost. To be honest I think most of us are usually aware when are breath is a bit dodgy, we can taste it, but there is the odd occasion when we get caught off-guard, are informed of the odour, then worry how many people have noticed it throughout the day. 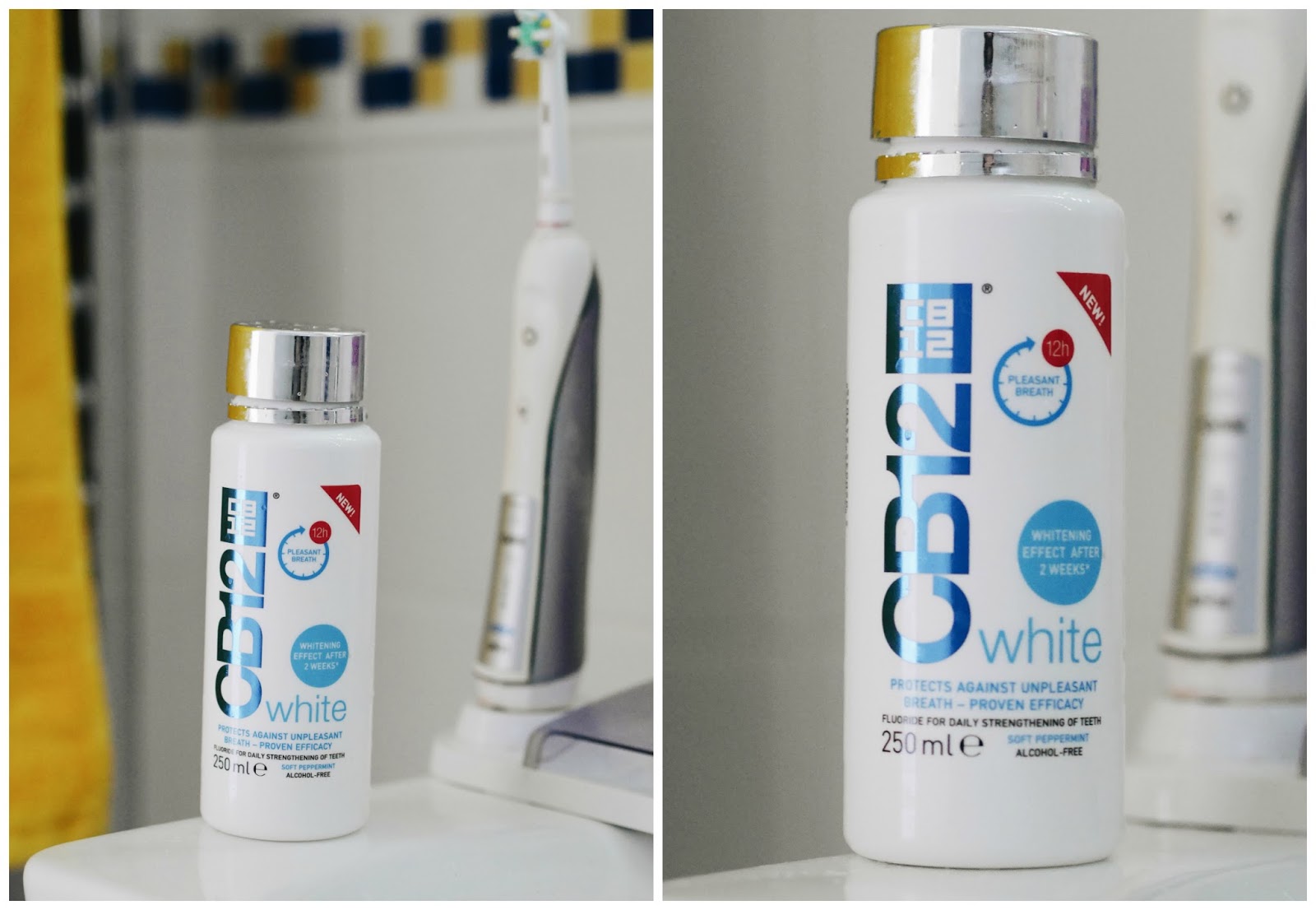 As an interviewer bad breath is particularly worry-some. Sometimes you have to cram yourself on a small noise leather sofa (that squeaks whenever you move a mm) with a band and talk with your mouths only a a few inches away so you can hear each-other over the soundcheck happening in the same venue. The thought of a band I love or admire having a post interview review of me and deciding that my breath is the thing most worthy of comment, well it’s horrific isn’t.

I will have already been talking from behind a veil of hair (attempting to hide my acne), keeping my arms pressed against my side (to hide my sweat patches) and either been celebrating the avoidance of an awkward greeting or experiencing the living hell of having to remain calm even though inside I am flapping because of an accidently grope or snog. If you think just remembering the facts, stats, album names, release dates, bandmember names, and making sure you mic and camera is working,  is all you have to think about, factor in all the above on top of that. Multi-tasking at it’s peak I think you’ll agree! 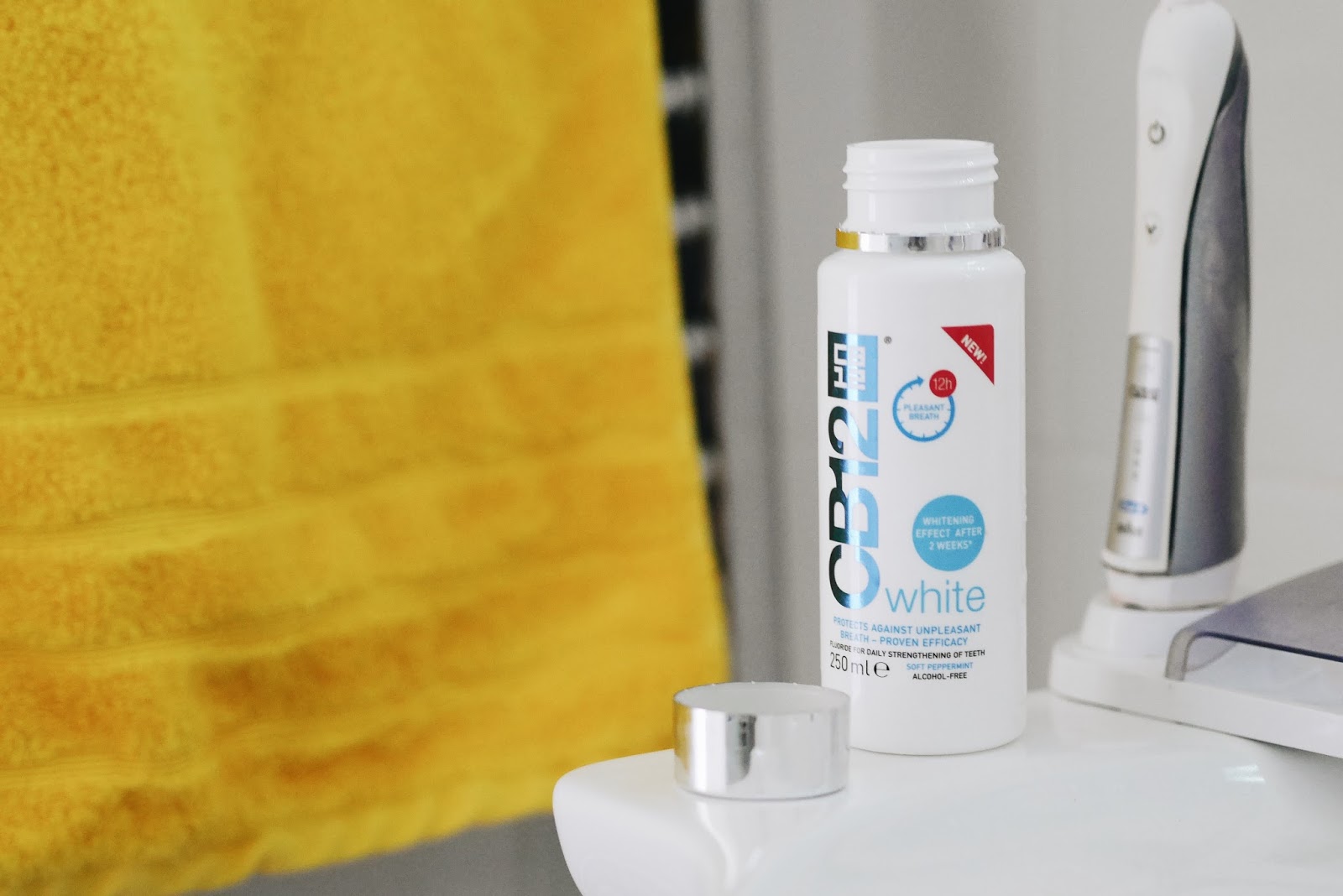 I’ve used mouthwashes before, and although intially you feel fresh and new, and confident enough to angle your face in the direction of fellow humans, this sparkle and zing is always rather short lived. This product’s promise of 12 hours of pleasant breath is defintely a big selling point for me, because it’s not as though we have the opportunity to top up during the day unless we rely on the use of gums and mints.

I’ve used it for a week and a half-ish now, so I feel ready to give you guys some feedback on the product.

I’ve not yet noticed the whitening affect of the mouthwash but then again I don’t eat/drink many things that cause a huge amount of staining – I don’t drink tea, coffe, or alcohol. I also don’t smoke, so perhaps I’m not the ideal candidate for testing it’s whitening capabilities. However you mouth does feel squeaky clean, so it definitely makes you feel like it looks polished and freshened up in there, plus you feel comforted by the fact that it is non abrasive and not harming your gnashers in any way. In fact it may be doing some good considering it includes fluoride.

One thing I can confirm is that I have felt more confident about my breath since using this mouthwash, because I really feel it’s effects are more long-lasting than the norm, or at least any others I’ve tried. My boyfriend hasn’t commented on my breath at all, which is a bit of a revelation, and he’s also been coming in for kisses a bit more the last few days, which I’m hoping is because I’m more kissable than usual, and not because he’s feeling guilty about something.

Another plus is that is although minty in taste it’s not so powerful that it stings. I’ve tried some in the past that are so strong they make your eyes water, but this one’s soft peppermint flavour is refreshing without being challenging to to rinse and gargle with for the 30-60 seconds.