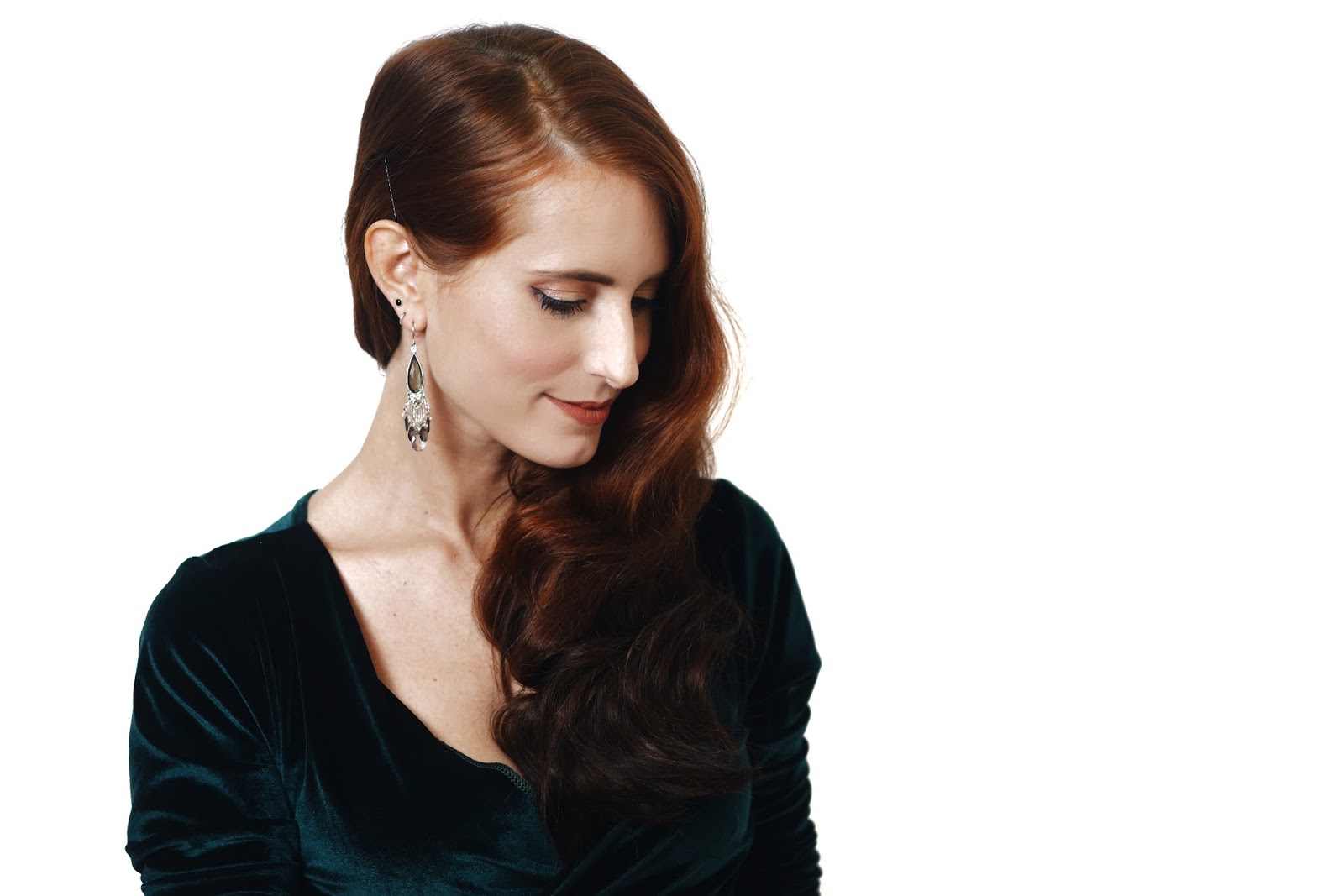 A couple of weeks ago I was honoured to be invited to Pixiwoo’s launch party in celebration of the release of their Hollywood Icons DVD and Five years of Real Techniques. I felt a little bit unworthy of attending such an event considering the level (subscriber wise) of my YouTube channel – so much so I thought I may have to restrain myself from bowing at the hosts, and many of their guests feet, Waynes World style. That said, what I’ve always liked about the sisters is that they seem incredibly down to earth and approachable, so I was sure they would do what comes naturally and make sure all those joining them in celebrating, felt equally as welcome, and not as though they’d been invited by accident. 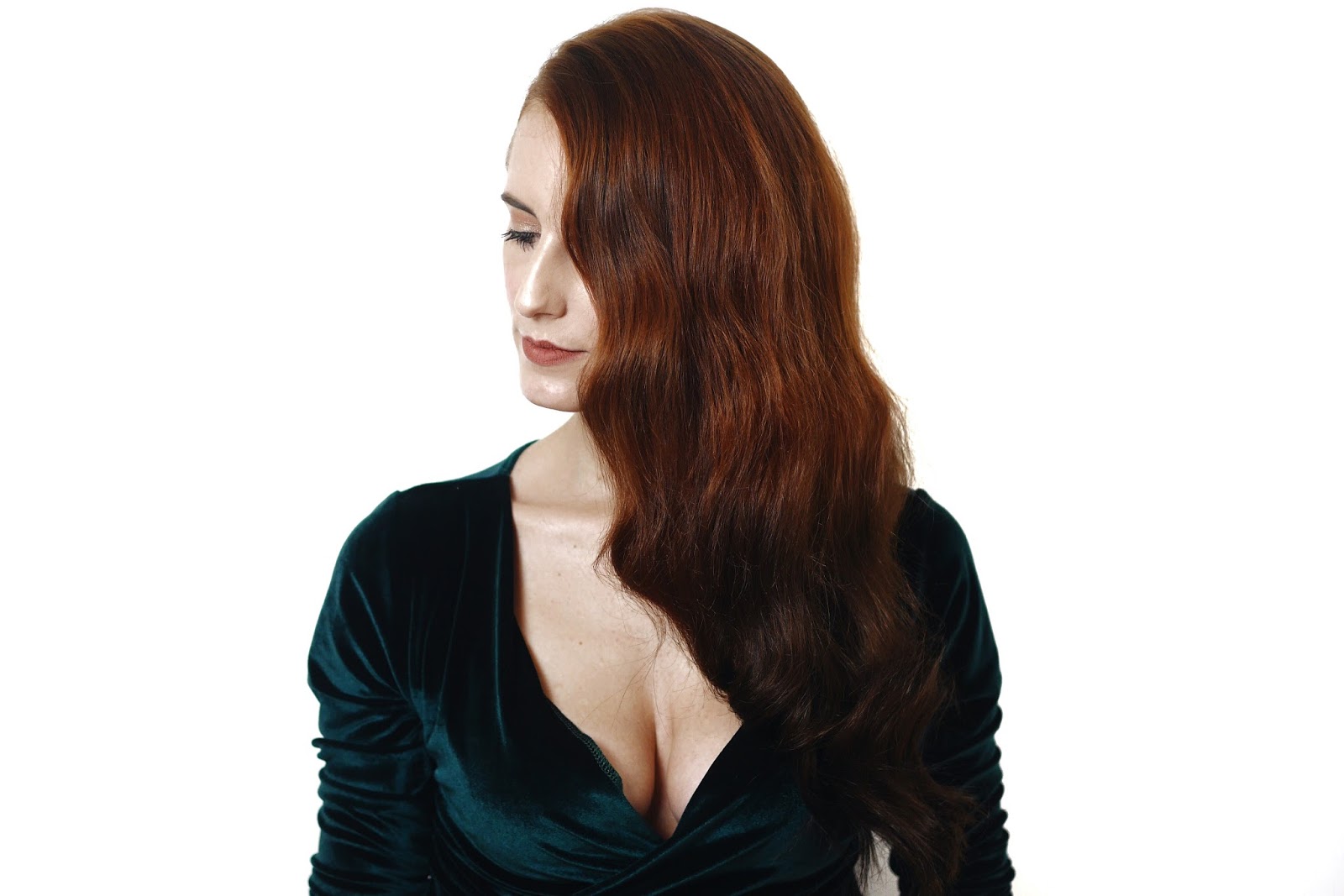 I wanted to make sure I was dressed appropriately for such a glam shindig, with a look insired by some of the icons I predicted would be featured in their DVD. 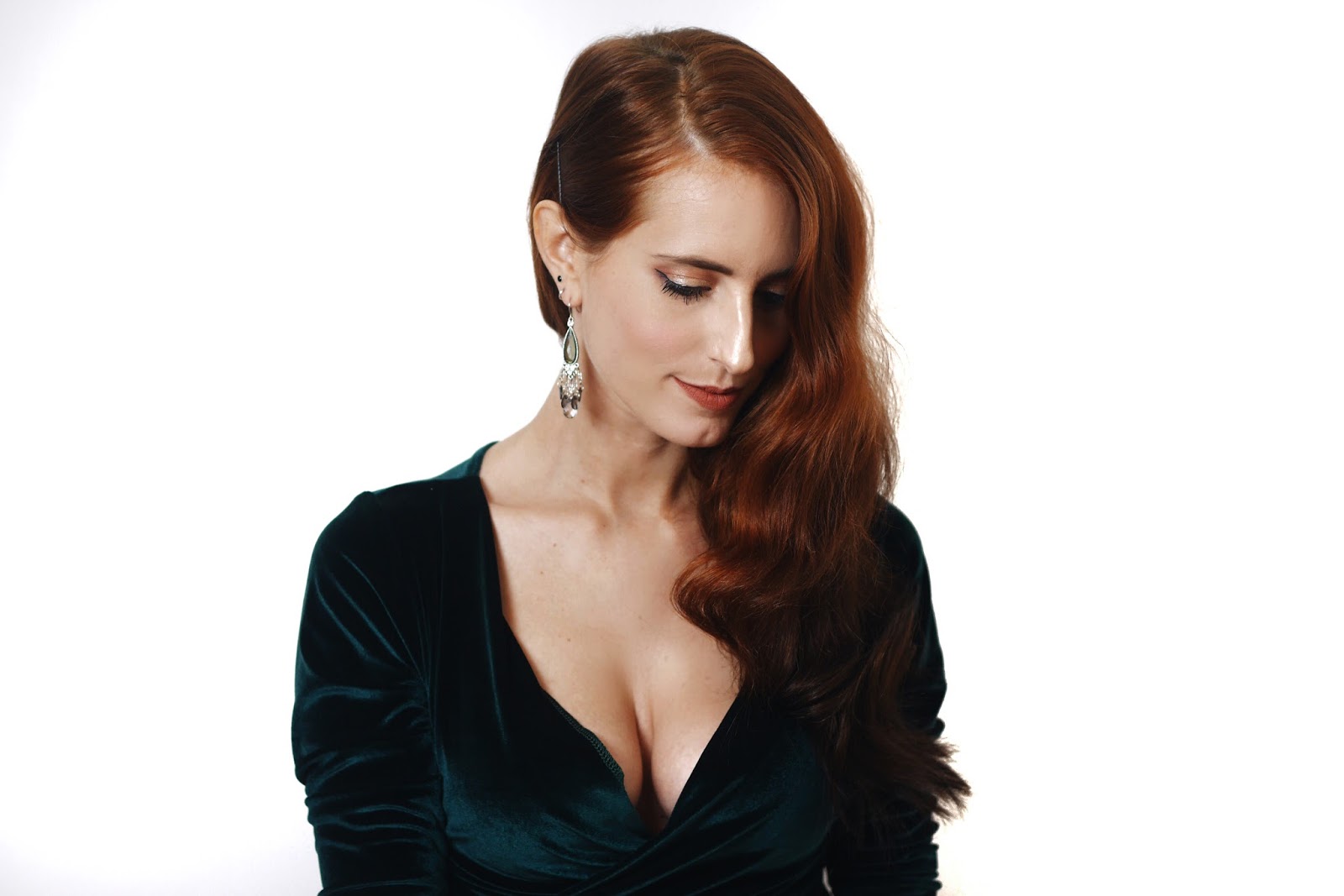 I’ve always been a fan of Hollywood waves, I’ve been known to google Veronica Lake ahead of  numerous occasions that have required elegance and polish. I love how it’s a style that can look finished and luxe, but at the same time look soft and high in the touchability factor. 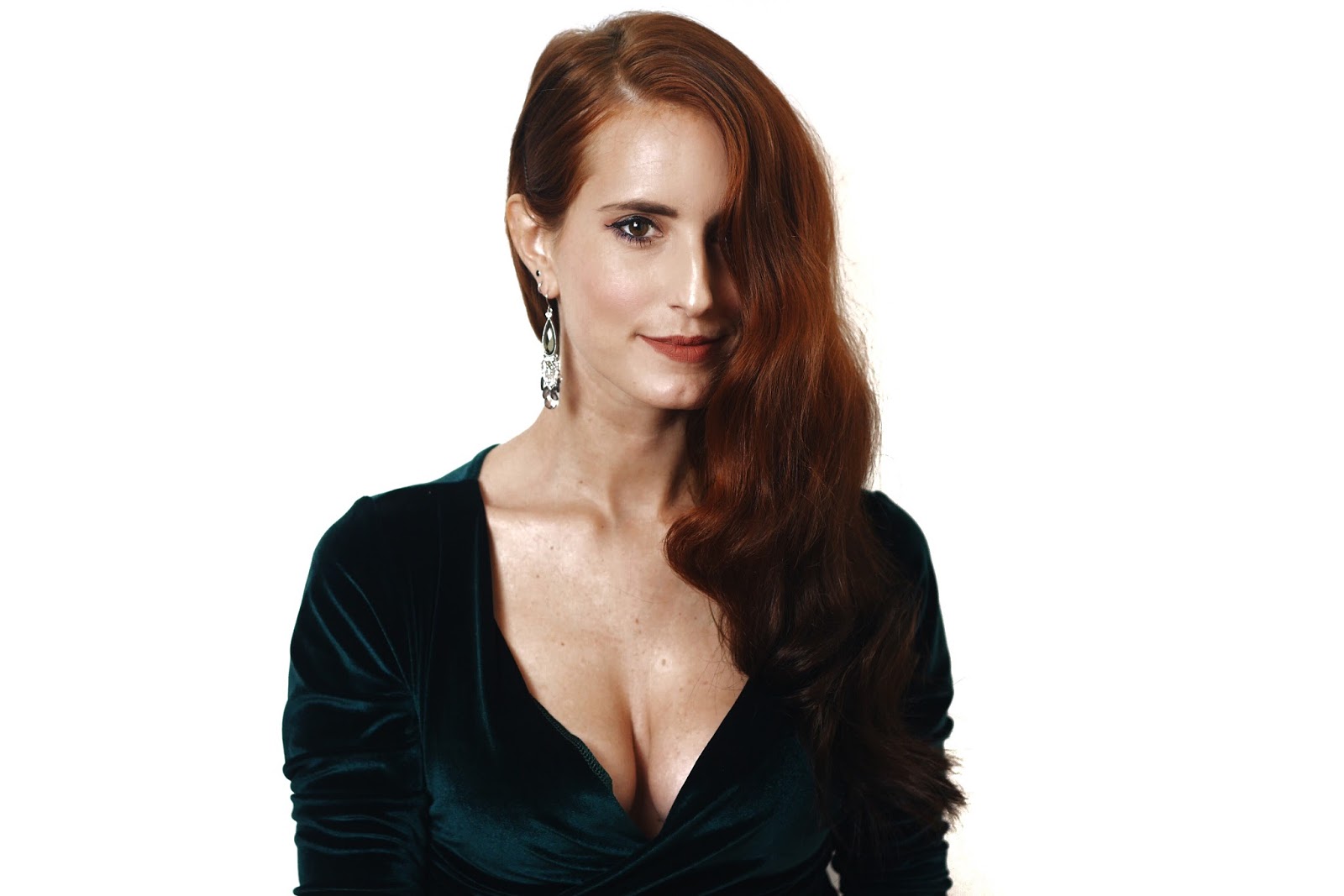 In absence of a beautiful silk gown, like the stunning pale green embroidered on Marion wore in Allied, I opted for another opulent fabric and hunted out this very old Missguided velvet wrap dress. 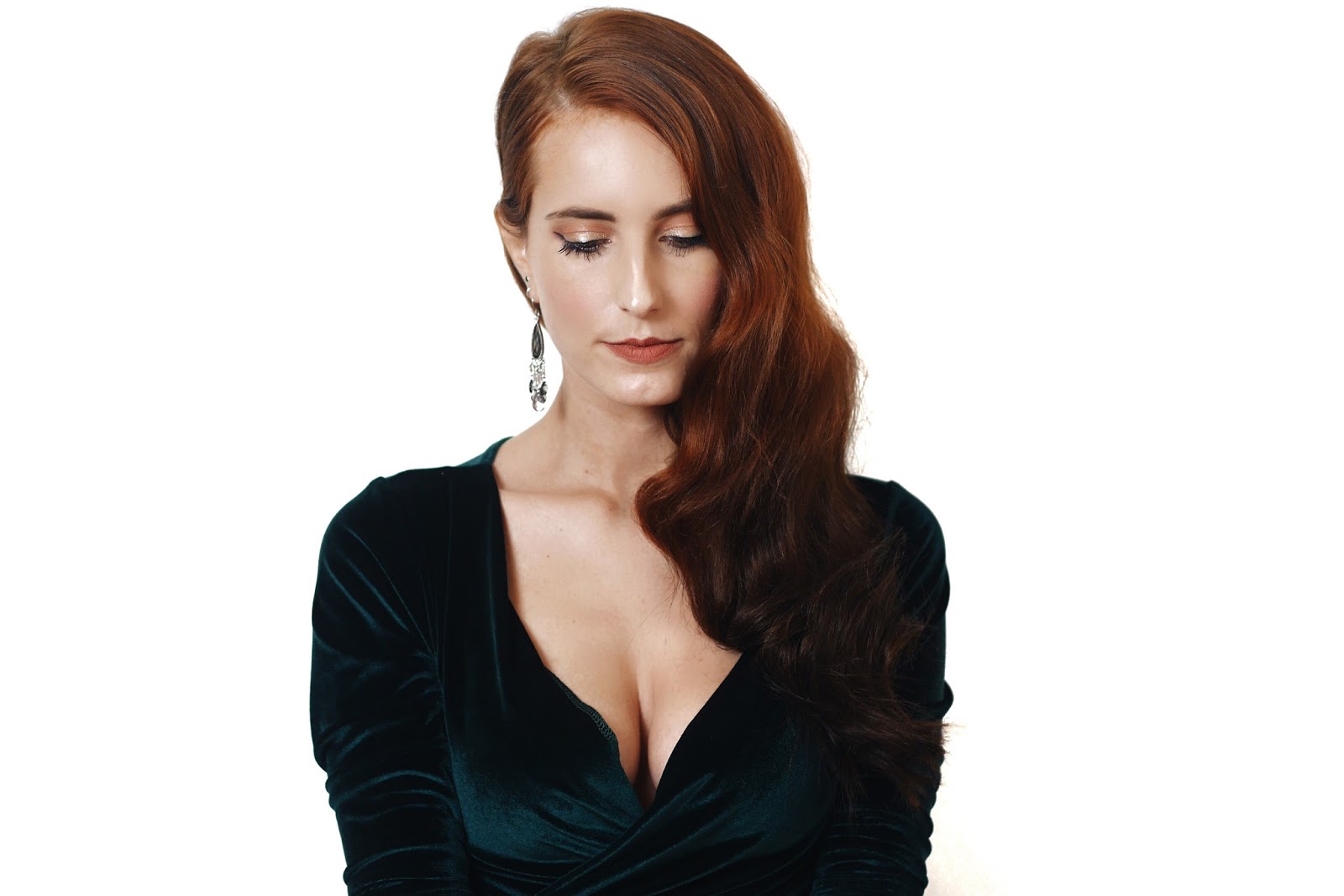 Part of me wanted to go for a bold red lip, as that’s what I instantly associate with an old Hollywood siren, but I feared teamed with my green dress I’d look like some sort of festive mascot. In fact, considering my dress is A-line, there is a fair chance I would have looked like a walking Christmas tree. Celebratory. Yes. Fun, Yes. But not quite sultry and seductive femme fatale aesthetic I was after. 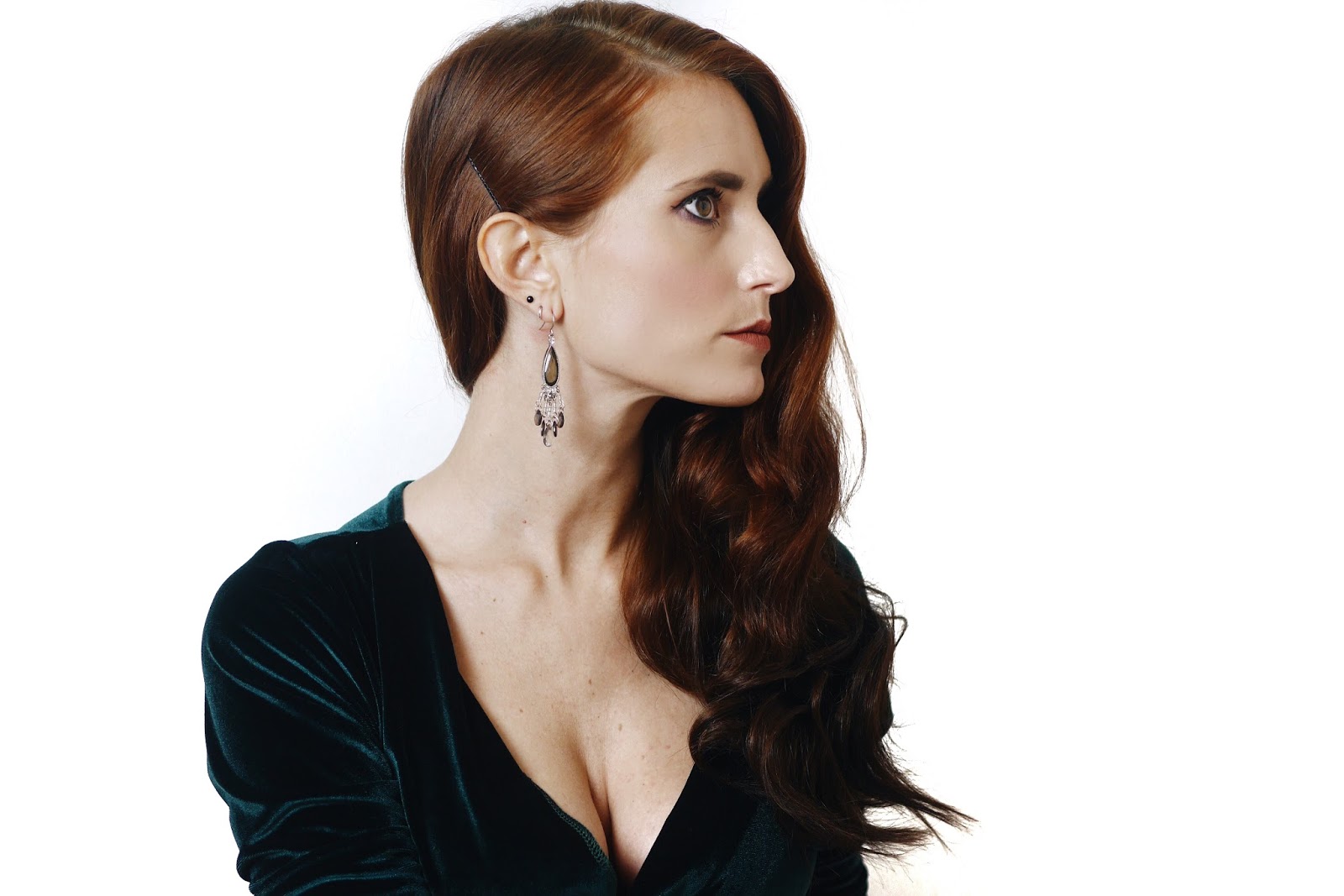 So instead I opted for Kat Von D’s Lolita which tones in quite nicely with warm hues of my hair at the moment. I gave myself a pencilled in brow, a bit stronger than my everyday one and decided to omit my usual contouring from the routine. 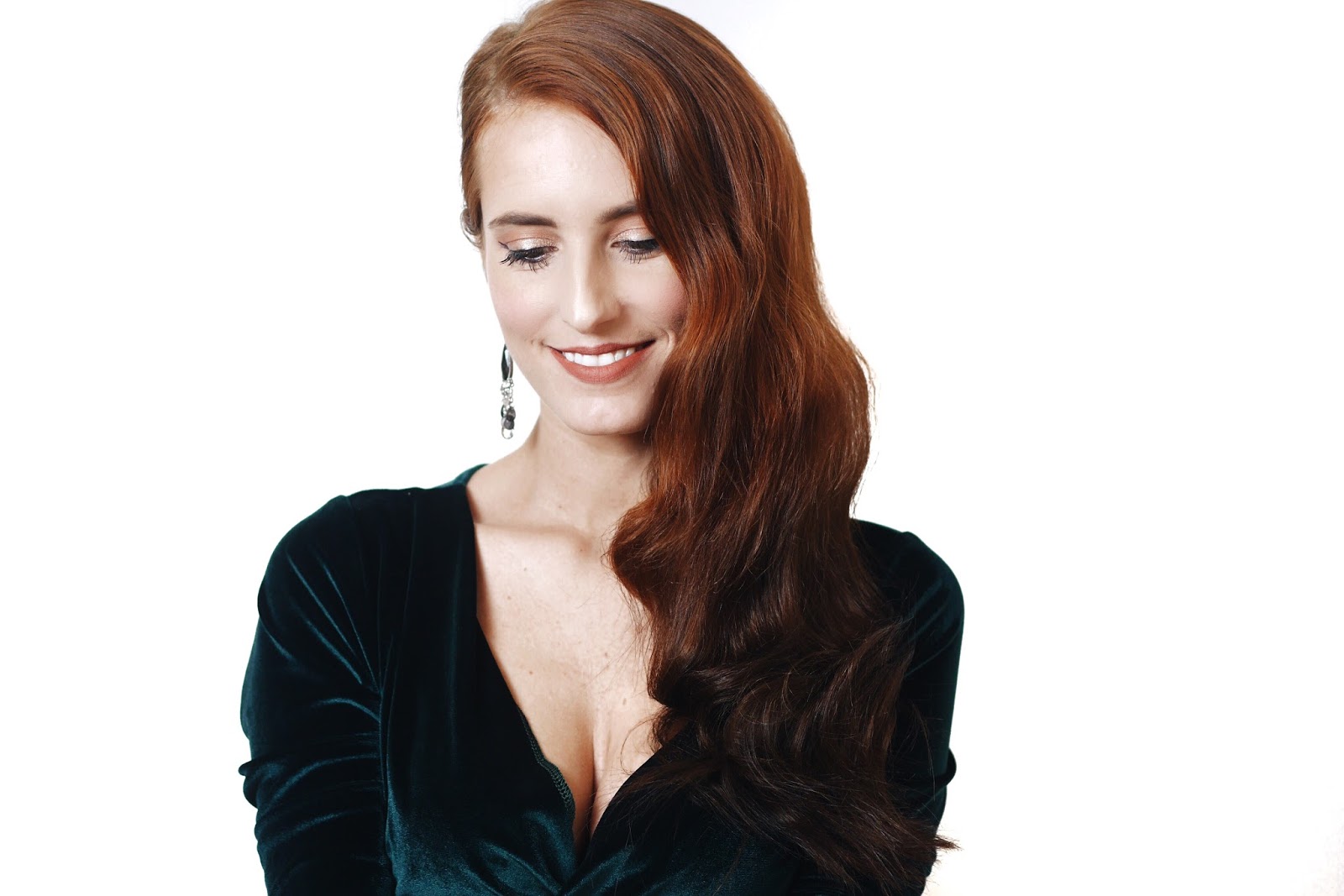 I went with a shimmery eye that had a warm tone in the crease – I really wanted the lashes to be the focus with this silver screen look. I didn’t apply falsies because, well, I’m frankly abysmal at applying them, and  did not want to attend an event filled with top beauty gurus with one lash attached to my chin, or worse. 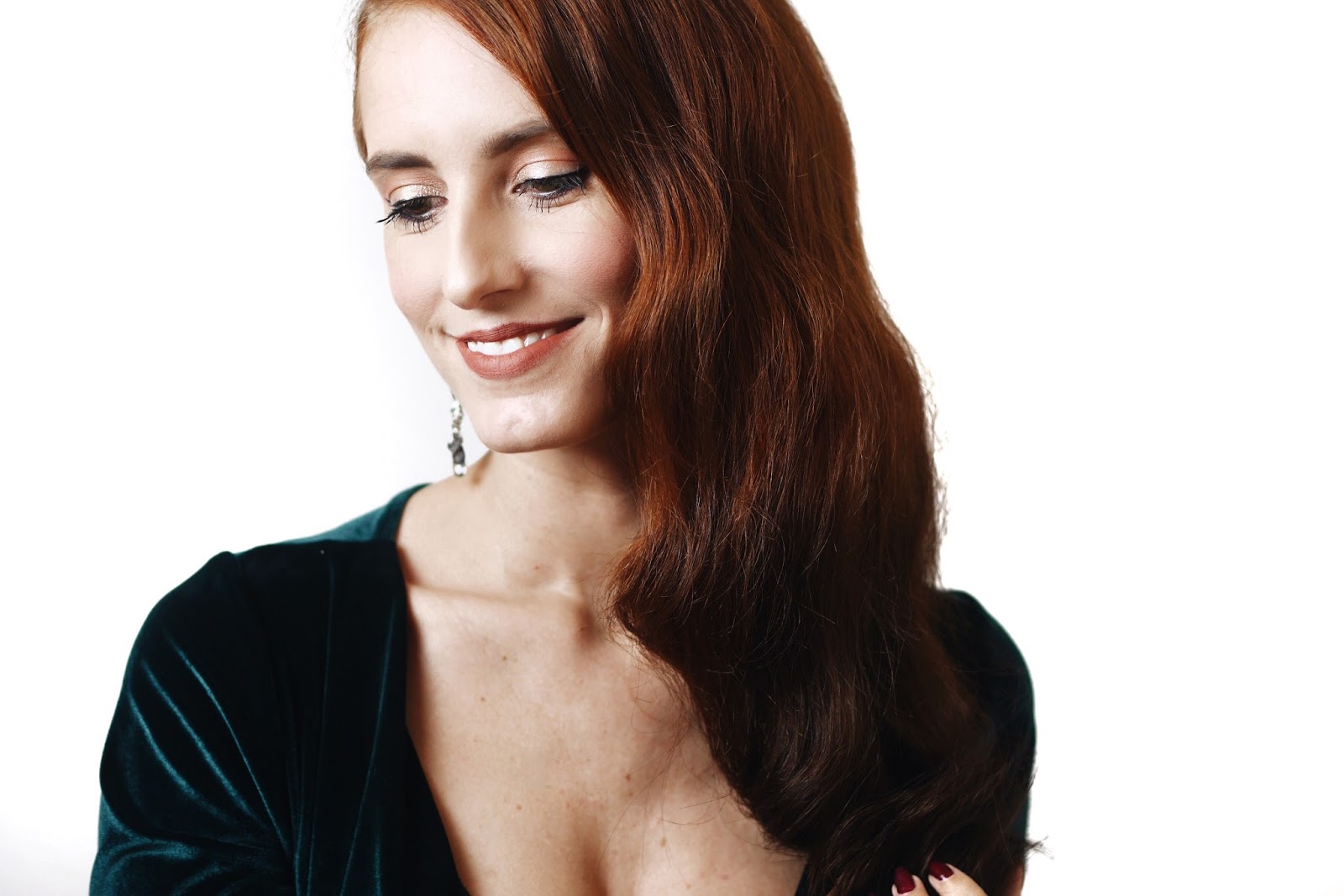 To create my waves I parted my hair at the side then used that bubble tong I have, the one that looks like a sexy toy. At first you look you should be wearing ruffles, shoulder pads and recreating scenes from Flashdance, but once you it brush out it has that powdery soft finish you’re after. 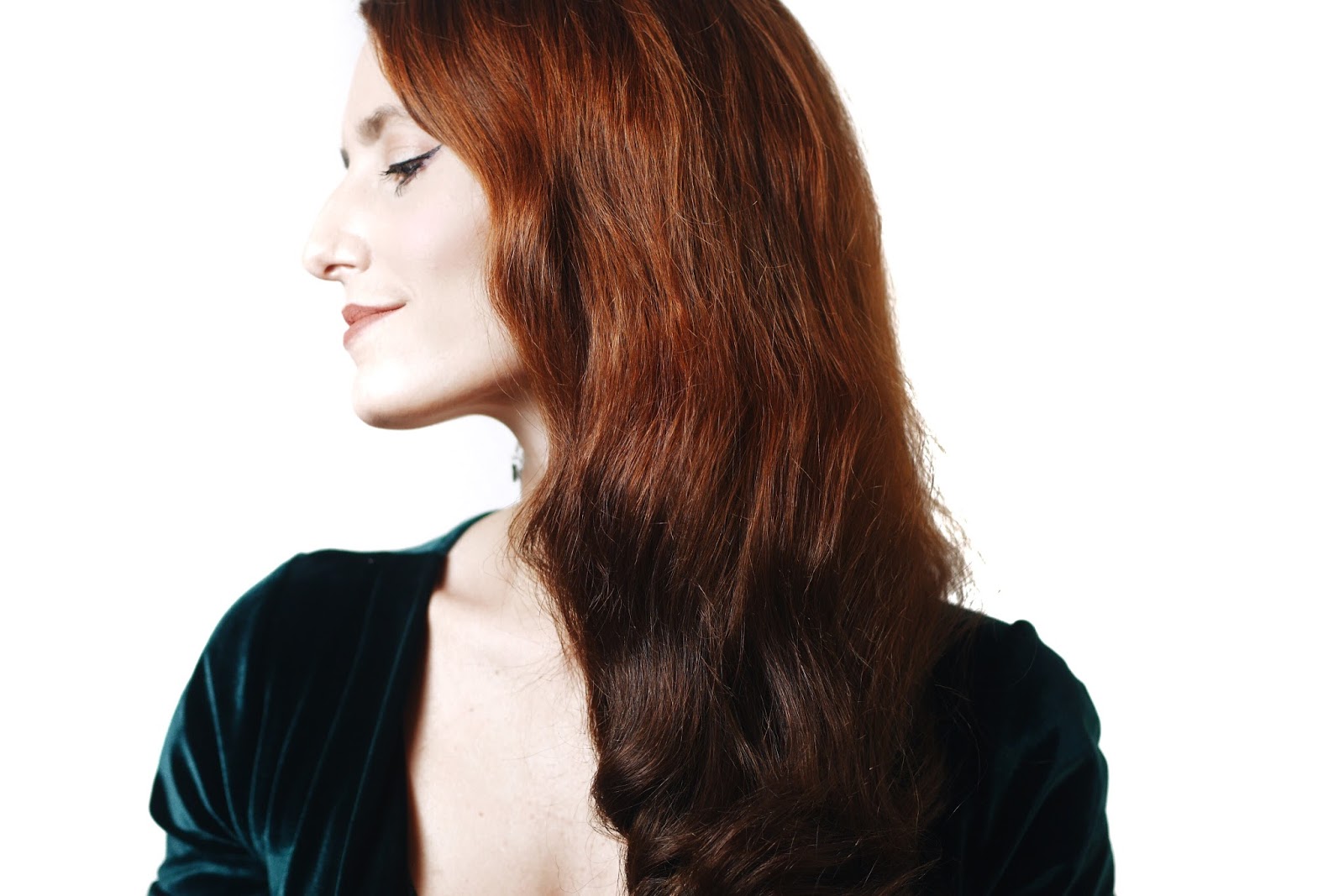 To add a final bit of decadence to the look I added some smarkly dangly earring. And yes, my lobes were stretched and sore by the end of the evening! 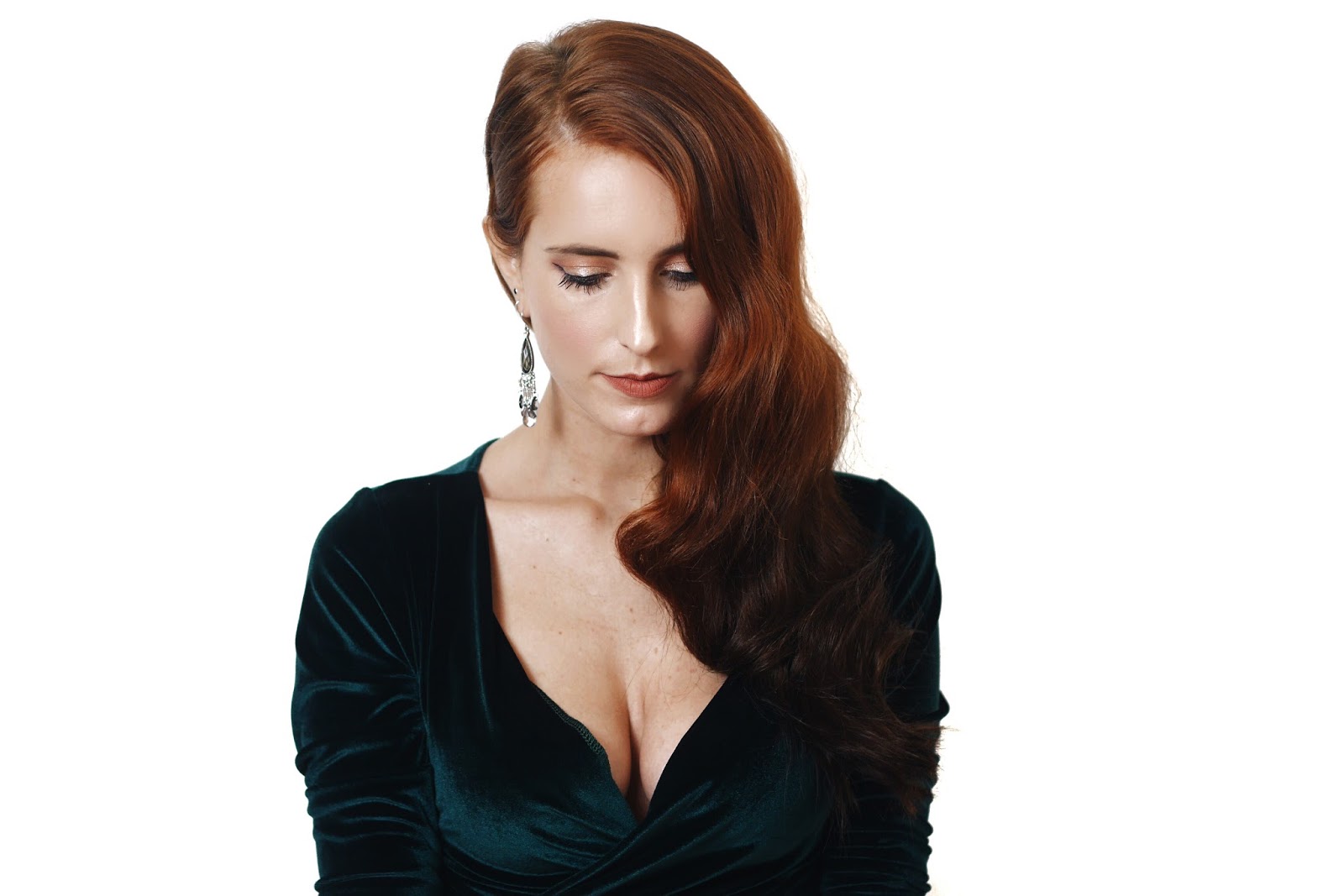 Hosted by BBC Worldwide, the party took place at a venue called Carousel. The downstairs space was decked out with projections showing scenes from their Hollywood Icons documentary, there were vanity pods for you to ensure everything was ‘on fleek’ – can we come up with a new less annoying phrase please – there were also poloroid camera’s so you could take away a cute little snap of your touched up make up look. As the event was also in celebration of a landmark 5 years of Real Techniques, many of their brushes and sponges were displayed around the room too.

As you guys know a huge part of an events success (in my eyes) is down to the quality of the canapes. I would give this nights offerings a sold 4.5/5, and it’s safe to assume myself and Soph did our best to ensure we were always situated where canape tray traffic was most busy. 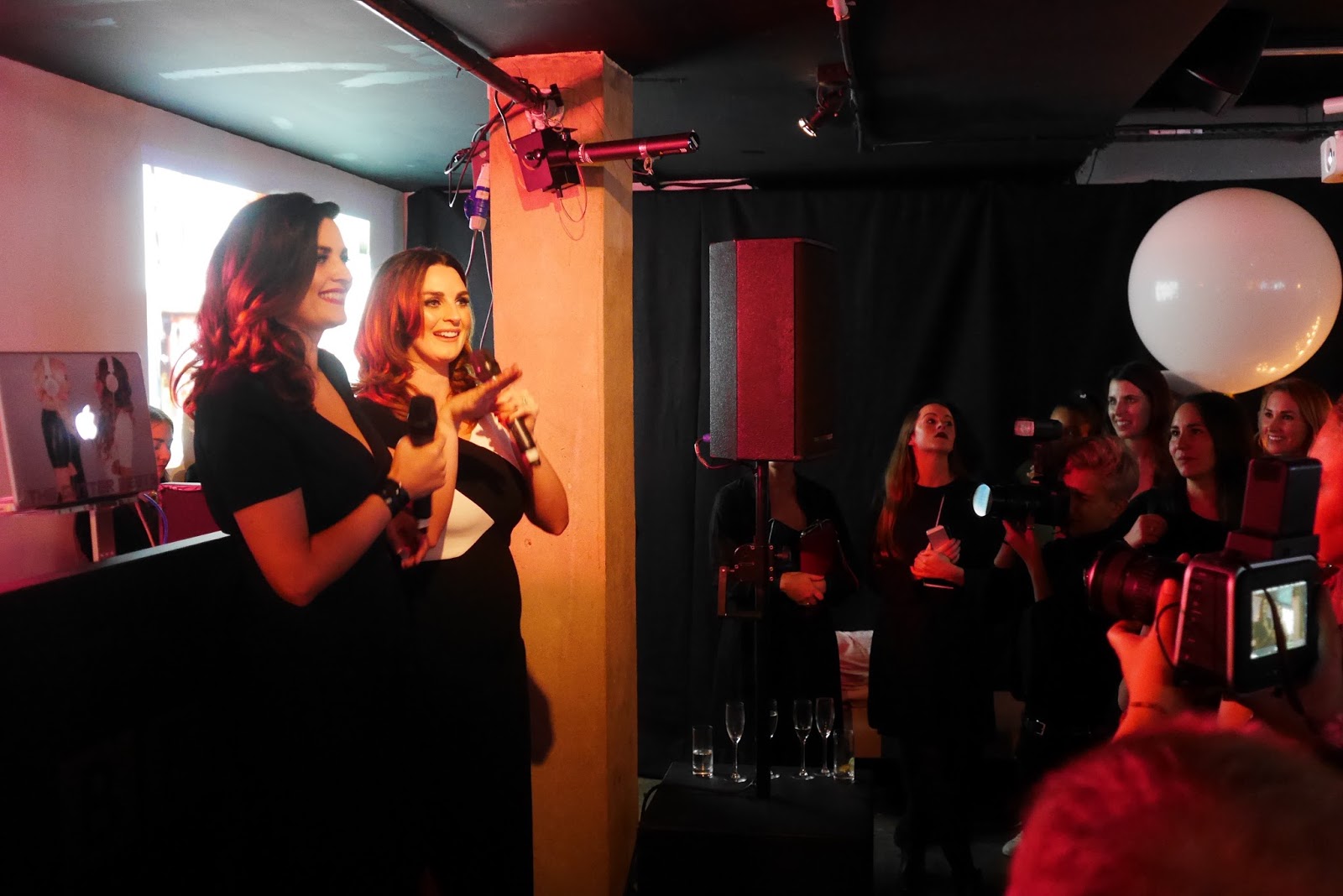 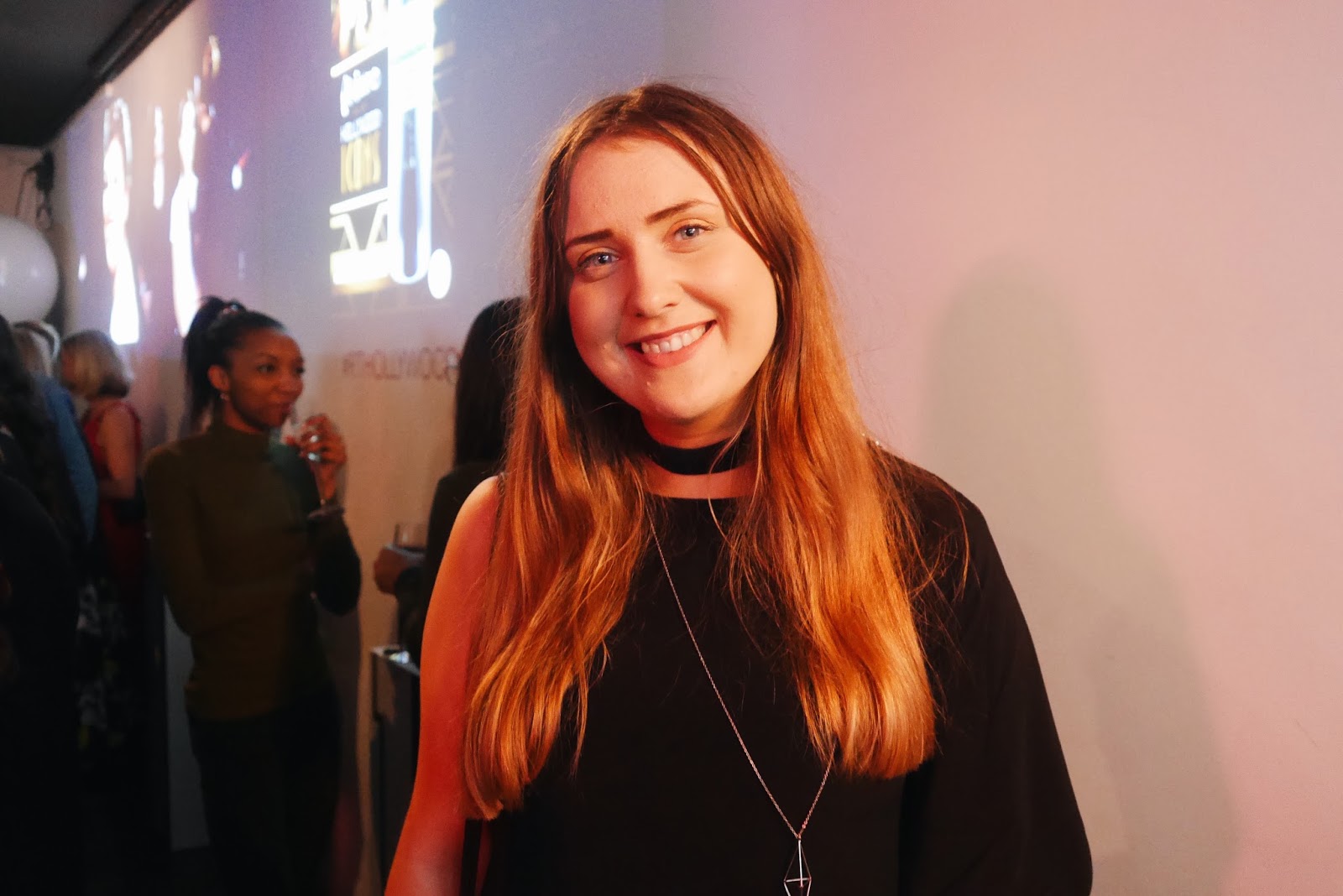 My lovely date for the evening, Sophie. 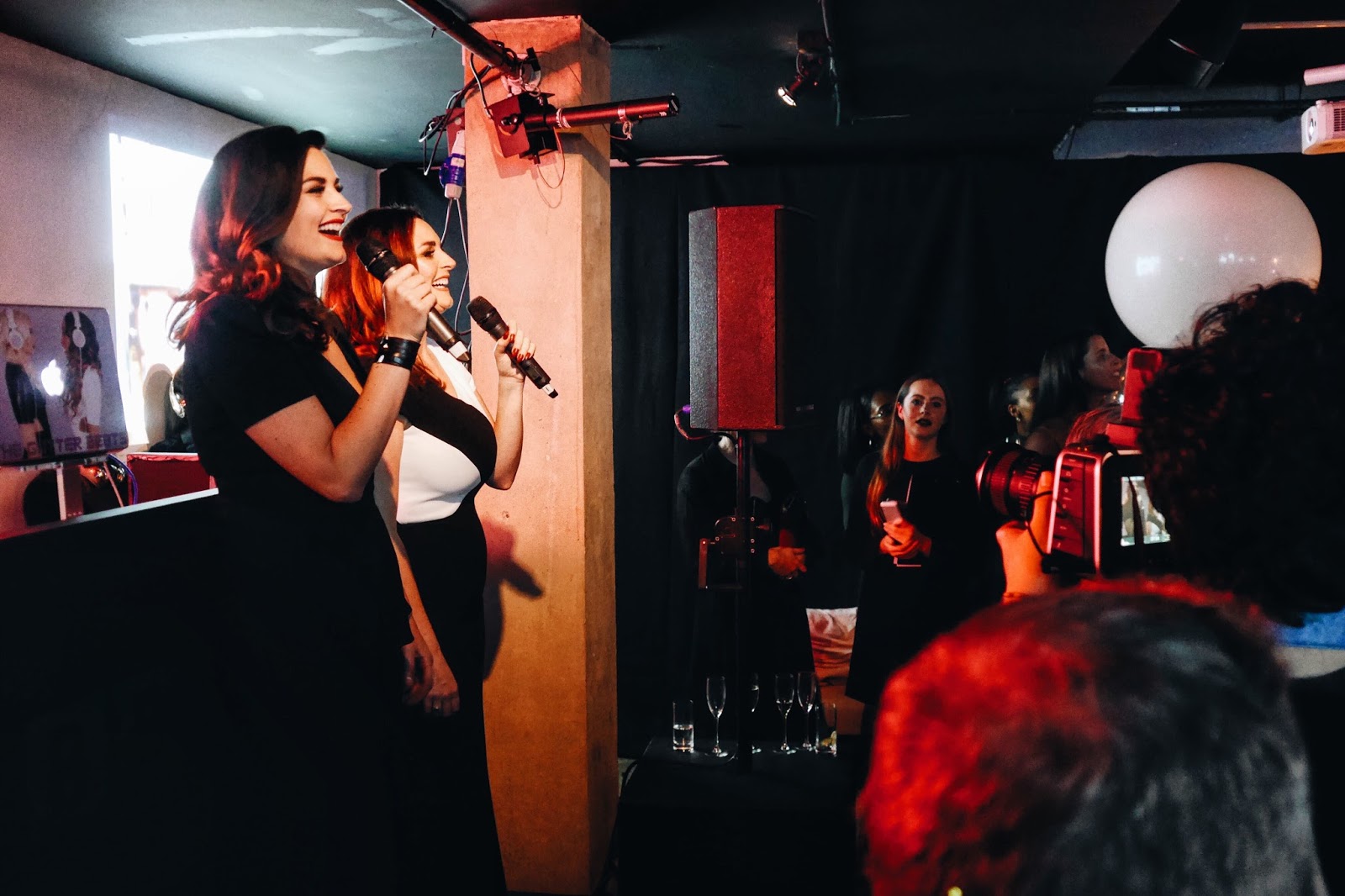 After a heartwarming intro from their dear friend and manager Dominic Smales, the ladies came on stage to talk about the project and what it meant to them. 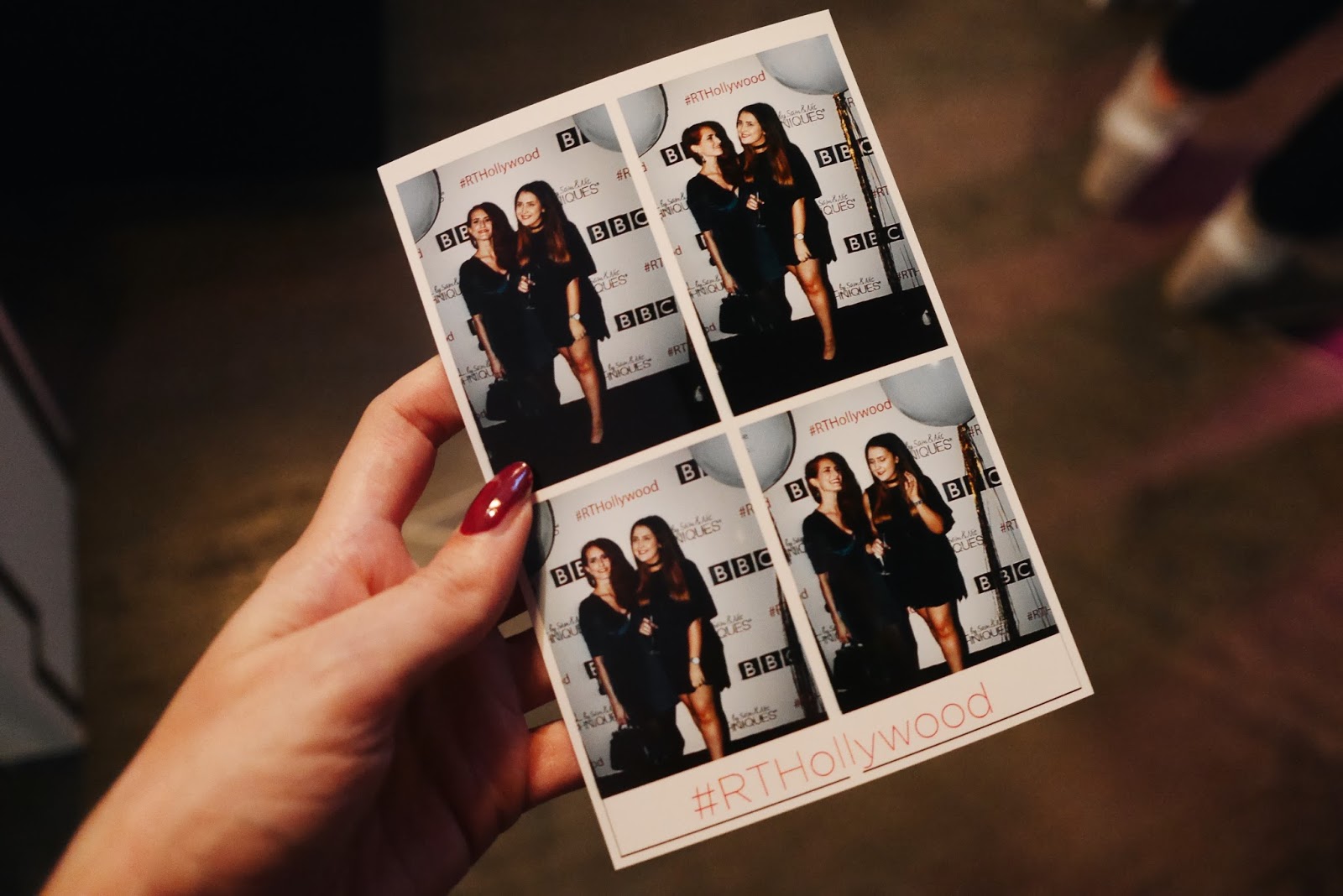 They had a branded wall available for you to pose against, but this wasn’t just the normal stop where you have to queue and nip in quickly to grab an Iphone picture against it, this was the real deal. The most swish photobooth I’ve ever seen in fact. Not only could you print out your pictures, you’d get sent a cool gif to post on social media. I chose not to share mine purely because I looked like I was part of an tragic unrequited love story with my mate Sophie….I was gazing at her like she was my fave curry from Dishoom. 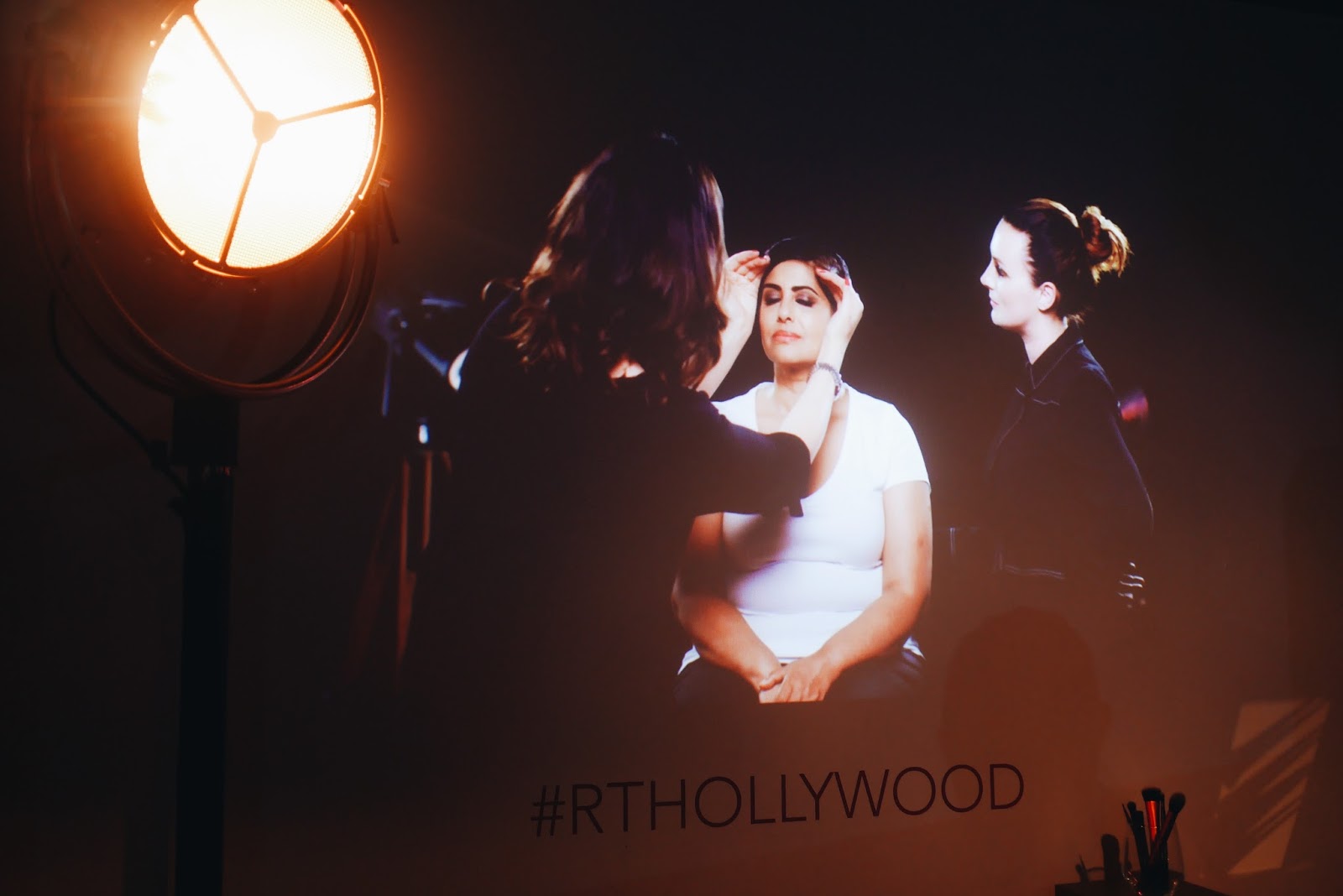 I really like how diverse the ‘models’ are that they used in documentary for the tutorial sections. I also appreciate how they avoided using the term ‘real women’ though, because everyone should be classed a real woman, even models in the traditional sense of the word. Why should being blessed in the looks department or having modelesque attributes mean that are you aren’t considered a real woman?!

Different skin tones, eye and face shapes are made up by Sam and Nic, all achieving uniquely stunning looks inspired by the Hollywood icons.

It felt right that they should use non professional models, as they are artists who found success via the platform of YouTube. Much of what we relish about YouTube is the relateable factor, and Pixiwoo have this in abdundance. Their videos are visually pleasing, and okay they both have a radiant beauty that looks wonderful on camera and in the flesh, hell, they could be movie stars themselves. However the way they talk, the things they say, and their interactions with people in their houses who are out of frame, remind us that in many ways they are just like you and me. 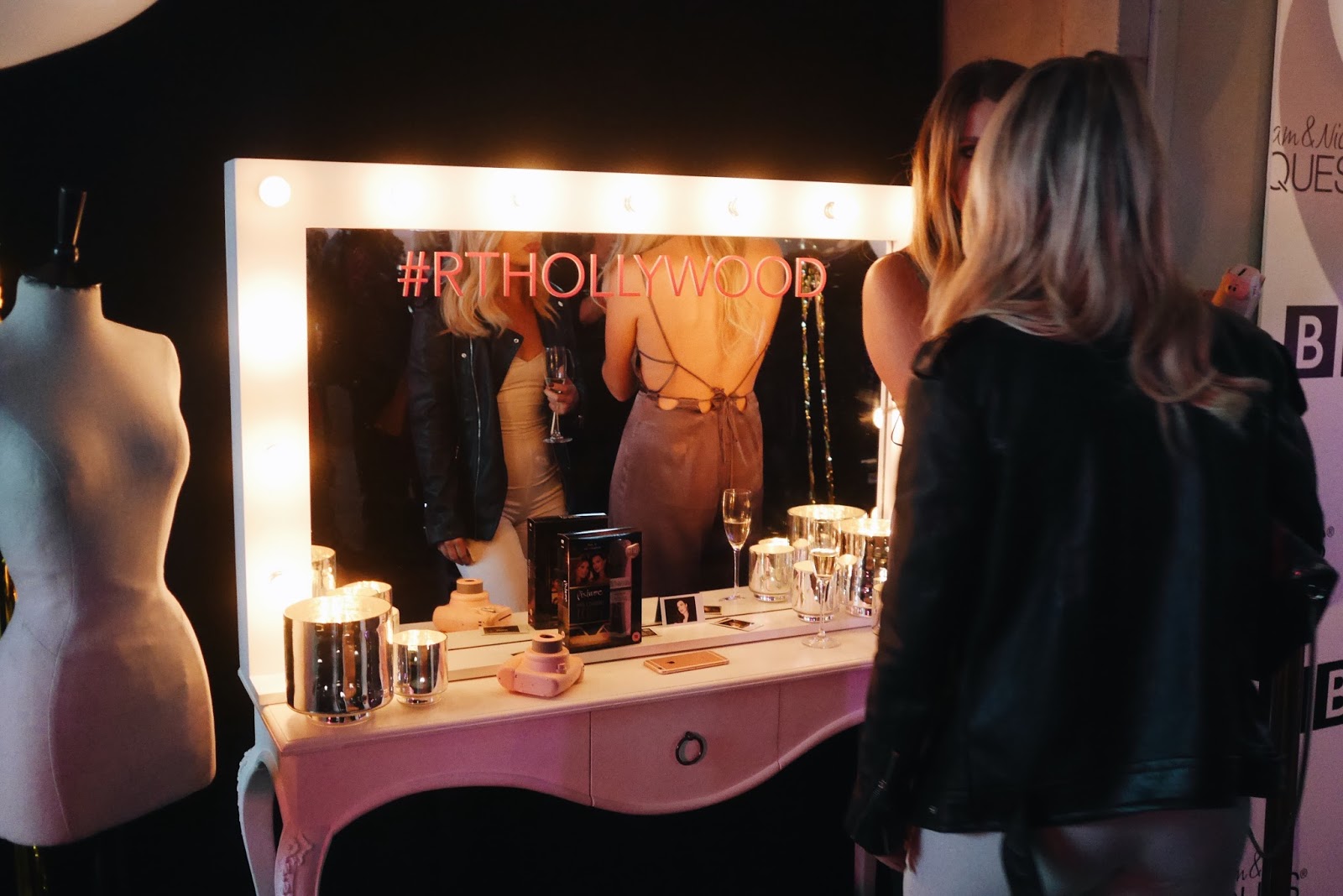 Talking of their personalities, this documentary is a great showcase for them, and you really see the difference between the sisters in terms of how they react to different situations – like when they meet some of their characterfull interviewees or watching the cosmetic surgery take place in a hospital in LA. I like that we see the cheeky and mischeiveous interactions between them, sisters always having the ability to get away with saying things to eachother many others wouldn’t dare say.

When you hear of someone you enjoy watching trying a project that forces them to deliver content in a new format, you do worry that some of their original charm will be lost.

There was a danger with an informative documentary that it could have been stiff, or that the voiceovers could have sounded offputtingly un-natural, but they’ve scripted it in a way that you still feel you are in the company of your YouTube favourites, while being different enough to feel you experiencing something elevated from the normal content. 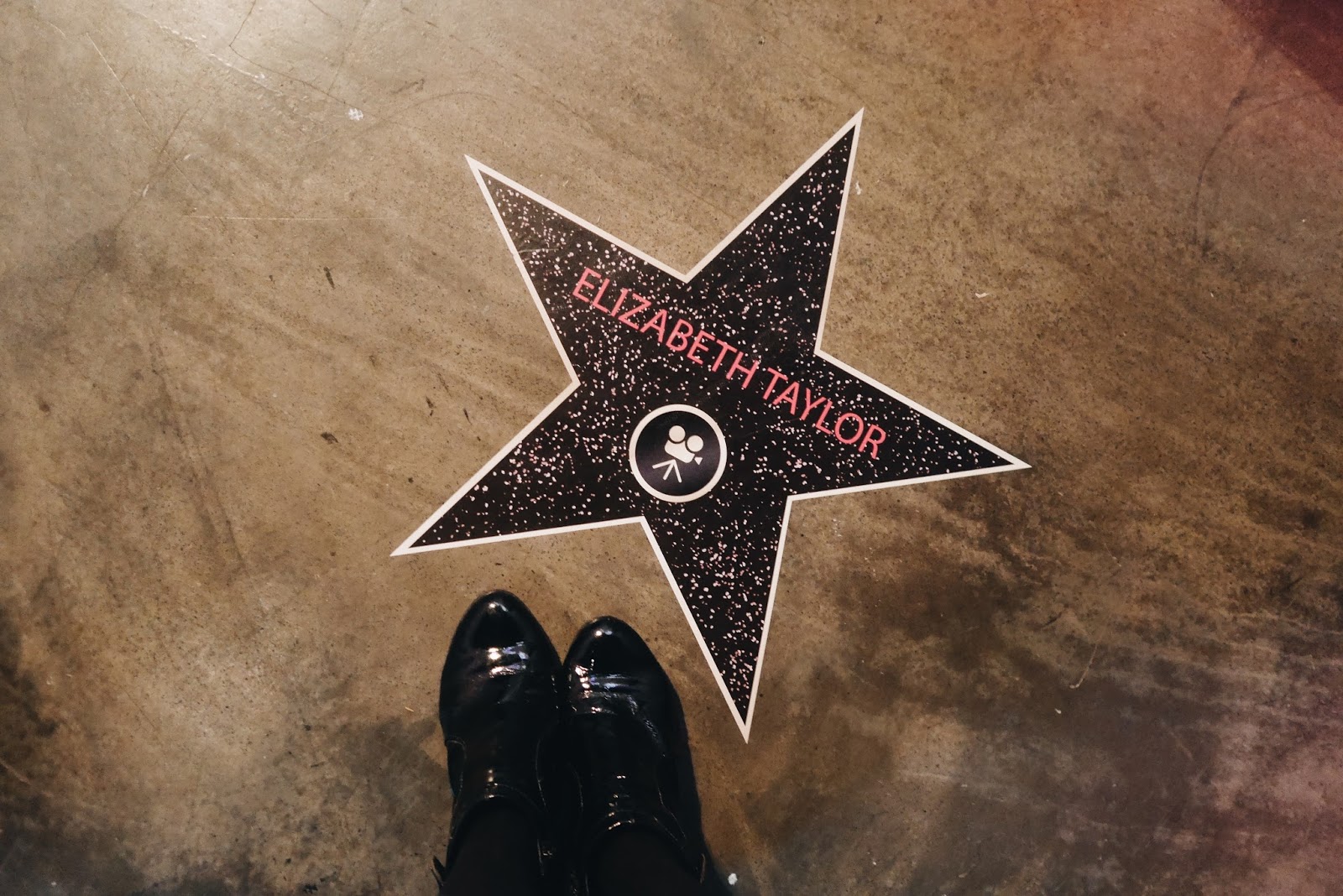 I loved the beauty/historical tit-bits I came away with after finishing this DVD. The sort I’ll try and remember and bash out at a suitable moment to make myself sound extremely knowledgeable and interesting. Before viewing I did have a level of awareness about the stories  of most of the Hollywood legends they feature, but there was always at least one amazing fact about each of these wonderful women that either shocked, trhilled or tickled me. I desperately want to tell you some of them here, but I’d rather encourage you to watch the DVD so you can be

Elizabeth Taylor has always been an almost outerwordly goddess to me. It never was just about outer beauty and her stunning combination of saphire eyes and raven hair though, it was the charity work and her guts and guile throughout all of her relationship and health problems. Her support of the gay community and her tireless work for the awarness of Aids and the support for those effected. It’s a cause close to my heart so I’ve always been particularly drawn to her out of all of the retro Hollywood beauties. What I did realise till I saw this documentary was that there was an aspect of her looks that wasn’t considered ideal. Realising that this woman I’d put on a pedestal also had carefully work her angles made me love her even more. 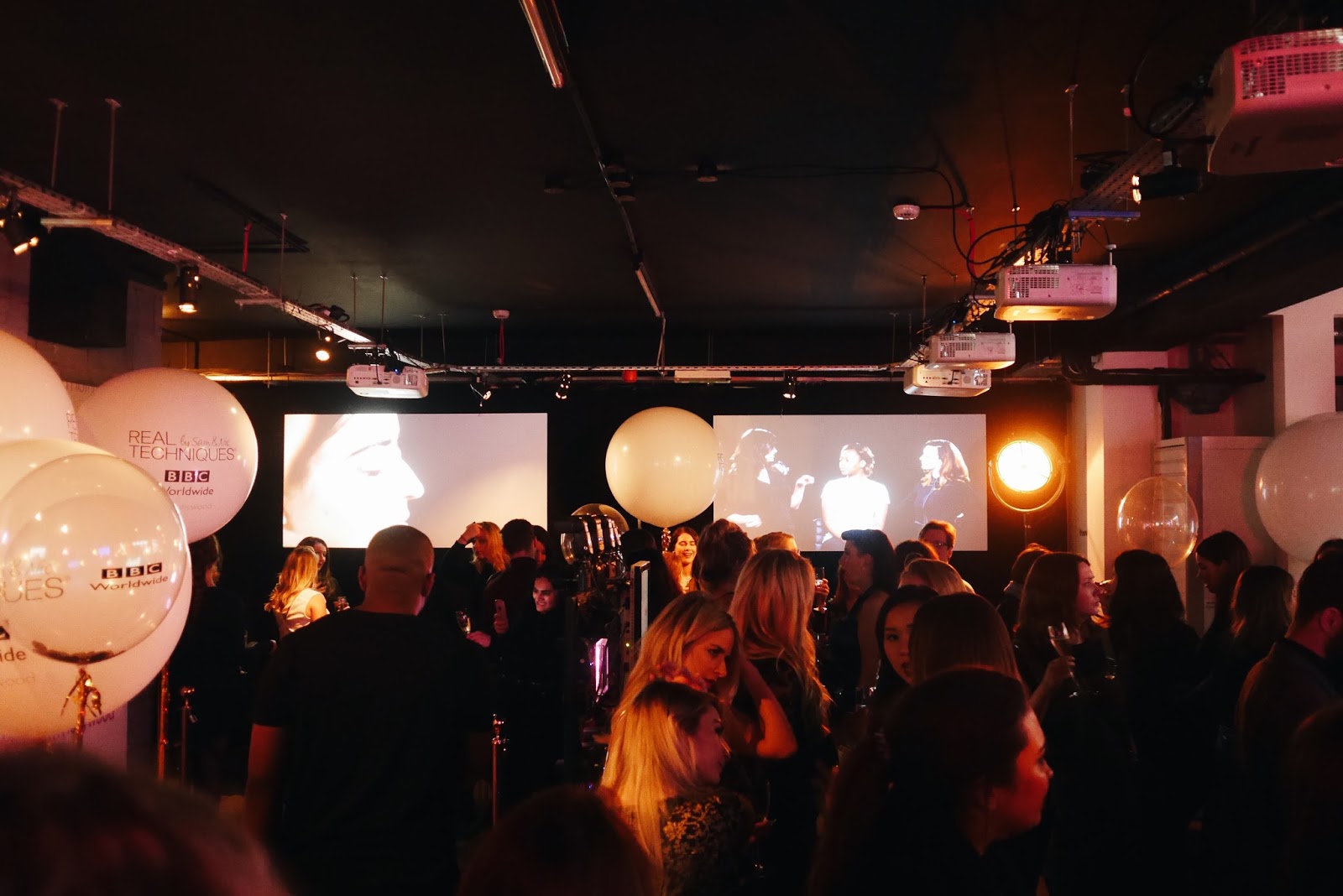 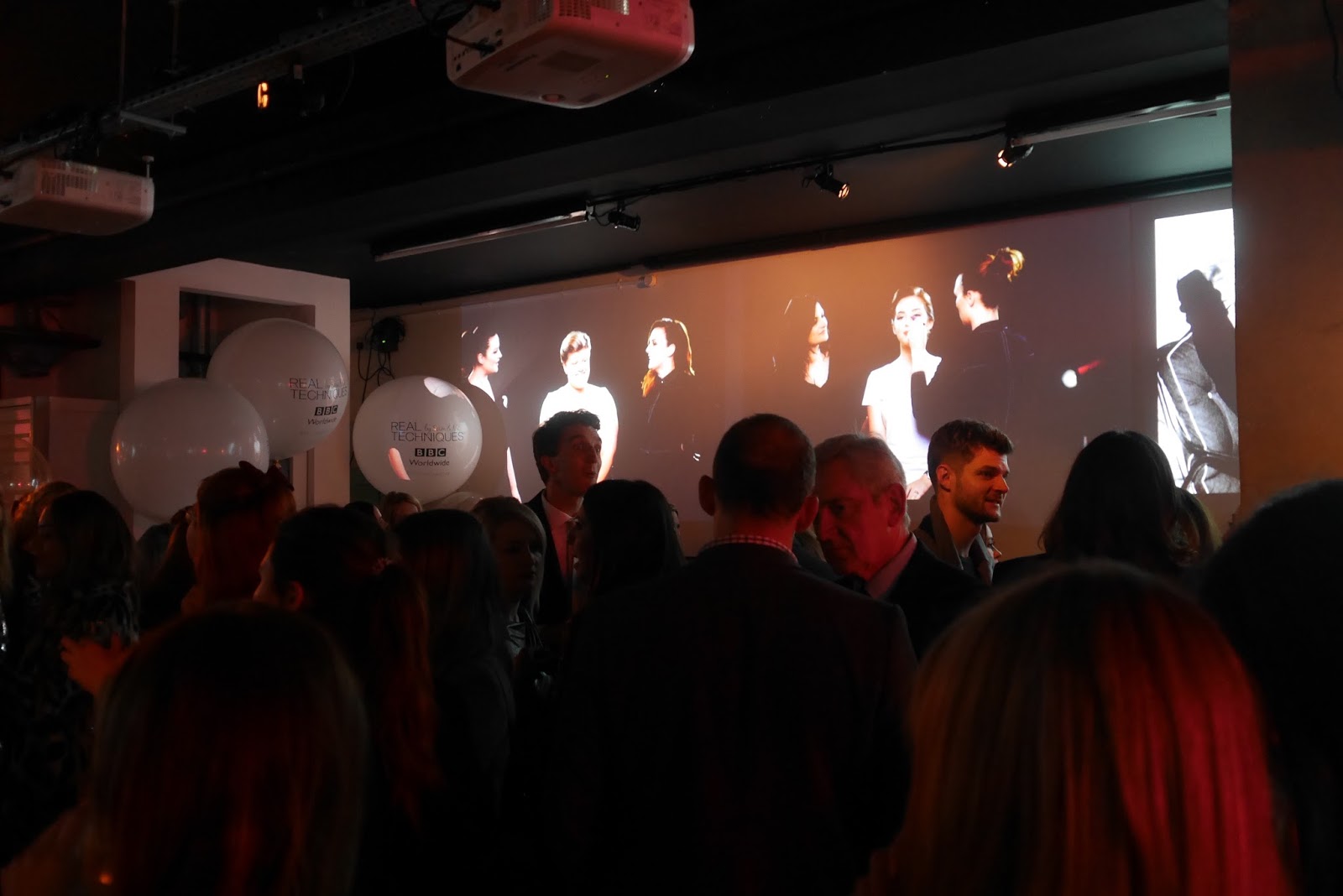 The party was awash with recognizeable YouTubers, the ones that you guys no doubt love, all looking resplendant in their glitzy outfits. Sorry I know I should probably have tried to get some good shots, sneaky papp style ones, or gone up and stifled by inner cringe to get a selfie so I could pretend we’re best mates when I poston Instagram, but that’s a bit too awkward for me. I’d rather leave them to have a nice time with friends, and have an organic conversation if the situation naturally unfolds. I know that makes me a bad blogger, and probably explains why I’m such a slow burn growth wise, but ho hum. Despite my lack of evidence the YouTuber community were out in force on this special night, confirming how treasured the duo are in this industry. 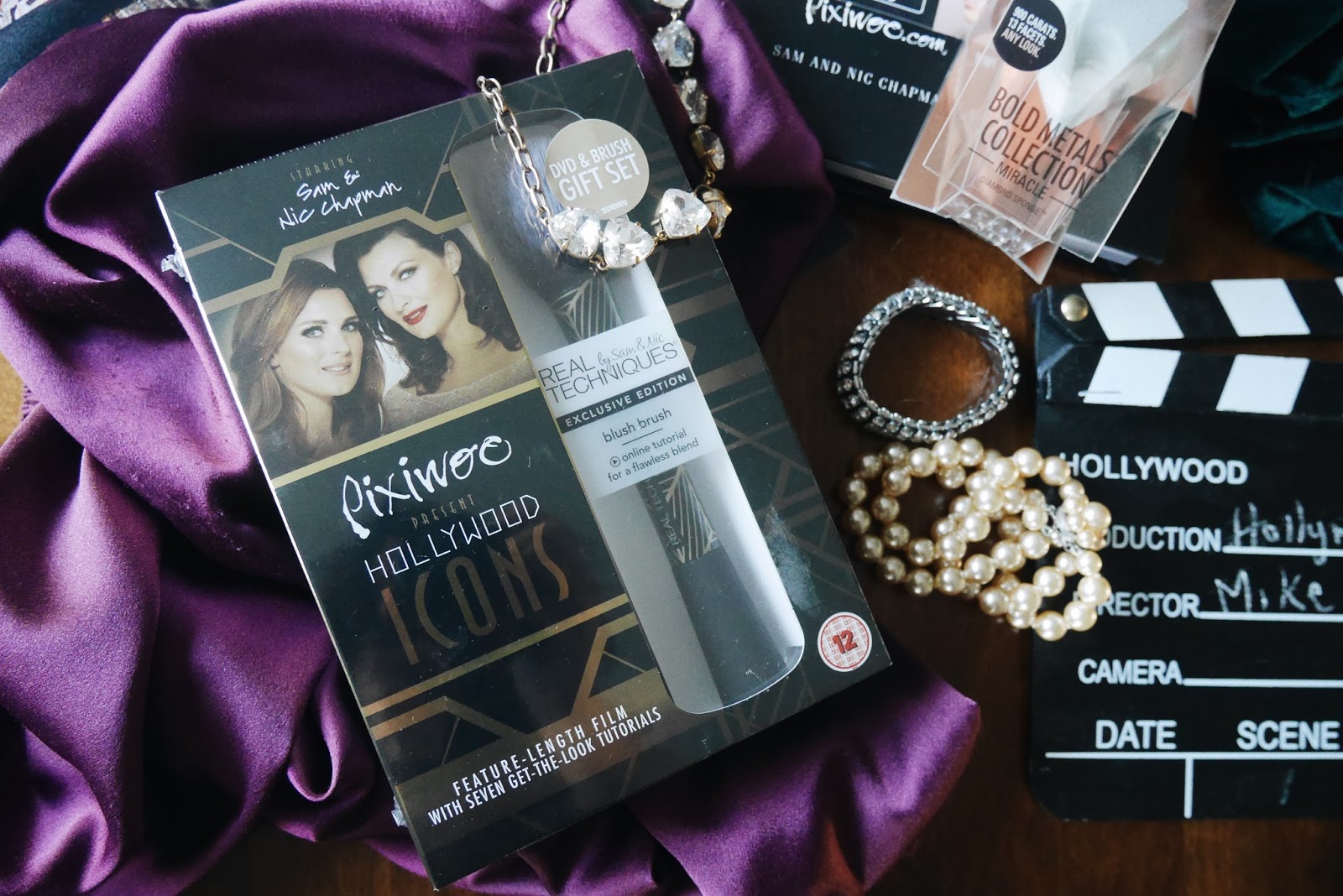 The DVD comes with a beautifully soft blush brush which is dceorated with this luxe art deco design. 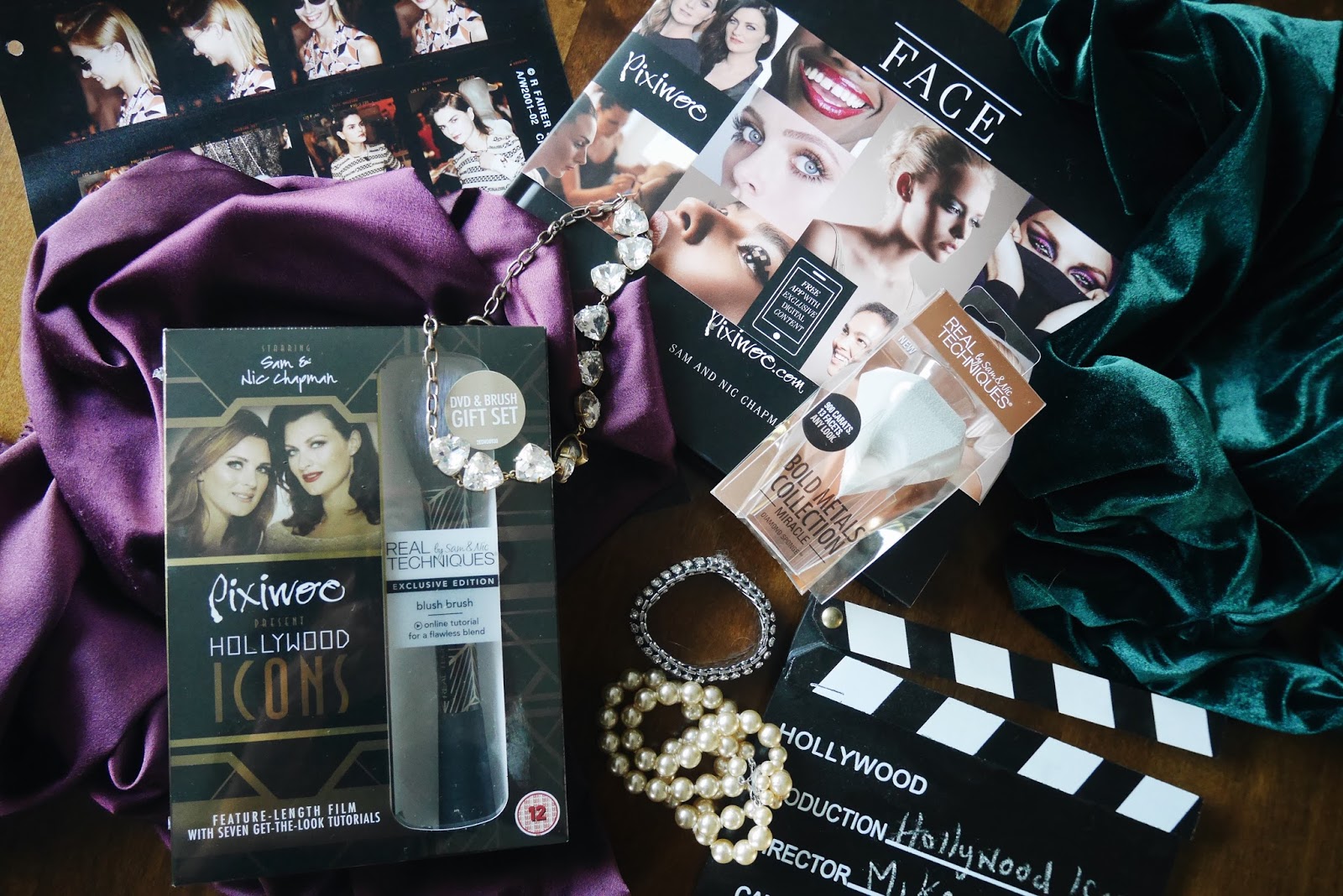 My friend Amanda is a make up artist at Urban Decay and she said that this Real Techniques sponge with it’s 13 facets is a great product – all the different angles and points allow you to get in and apply and even out products in all the nooks and crannies of your face. Aside from it’s functionality though, it’s a pretty awesome looking bit of kit for your make up bag isn’t it?!

It is so inspiring to see what hard work and willingness to share your talents/passion can achieve.  I’m not naive to think that I’ll ever get to their diizy heights point in terms of YouTube and the opportunities it delivers, but success can be achieved in many different forms and scales, and all should be treasured equally.

I know a lot of people look to the younger YouTubers as ‘goals’ and ‘inspo’ but as someone who has started to embark on taking their YouTube at a relatively mature age I feel more in sync with the likes of Nicki and Sam. Okay despite our similar ages I’m in a very different position, no home, no kids etc, but the things they say always ring true for me, and their ability to juggle all of their life roles is also really encouraging.

(So thanks for keeping it real guys, but also injecting a lovely amount of glam into my Sub box) 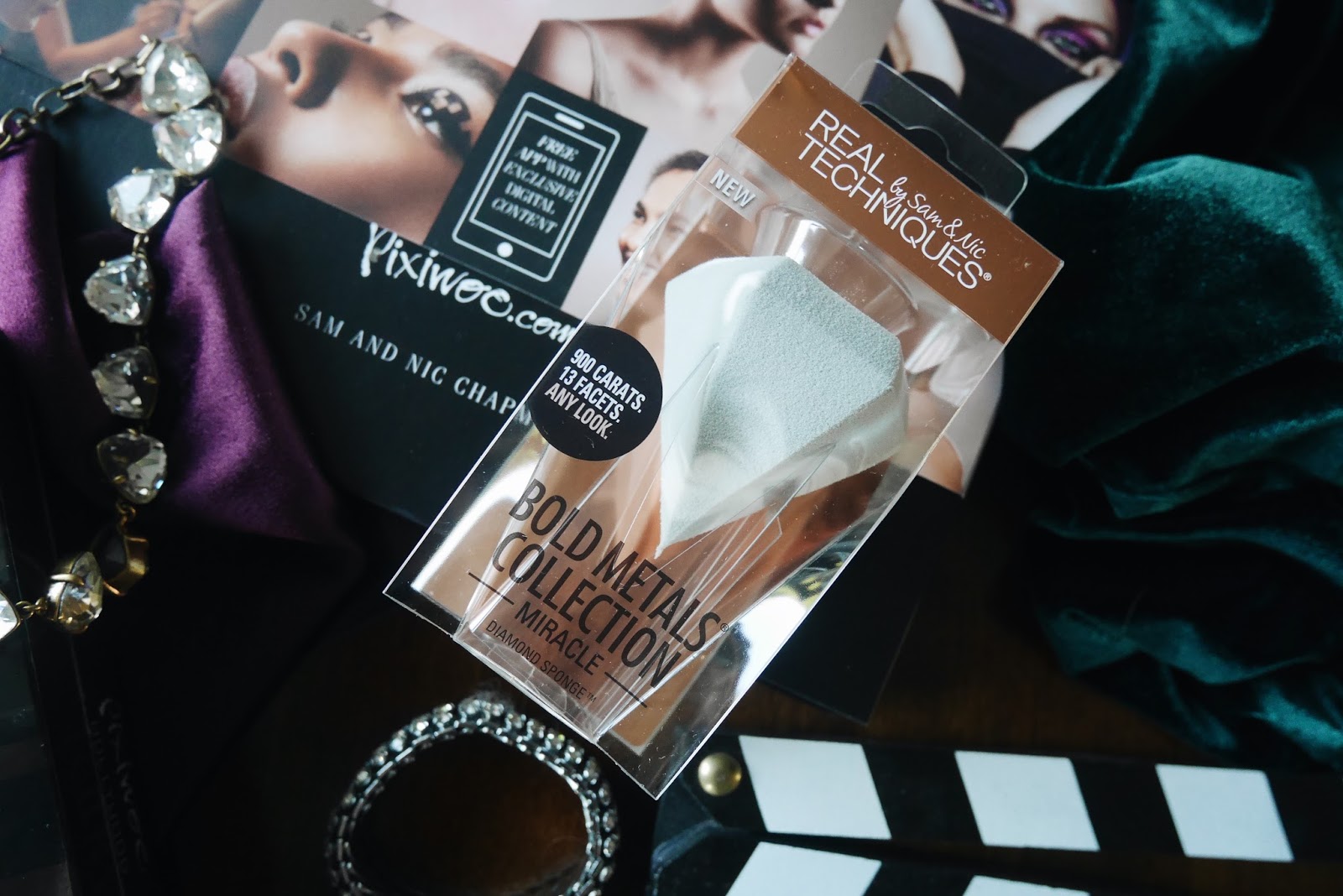 Thanks so much for having me and being inspiring people on YouTube (that are closer to my age bracket). I can’t wait to see what you do next!