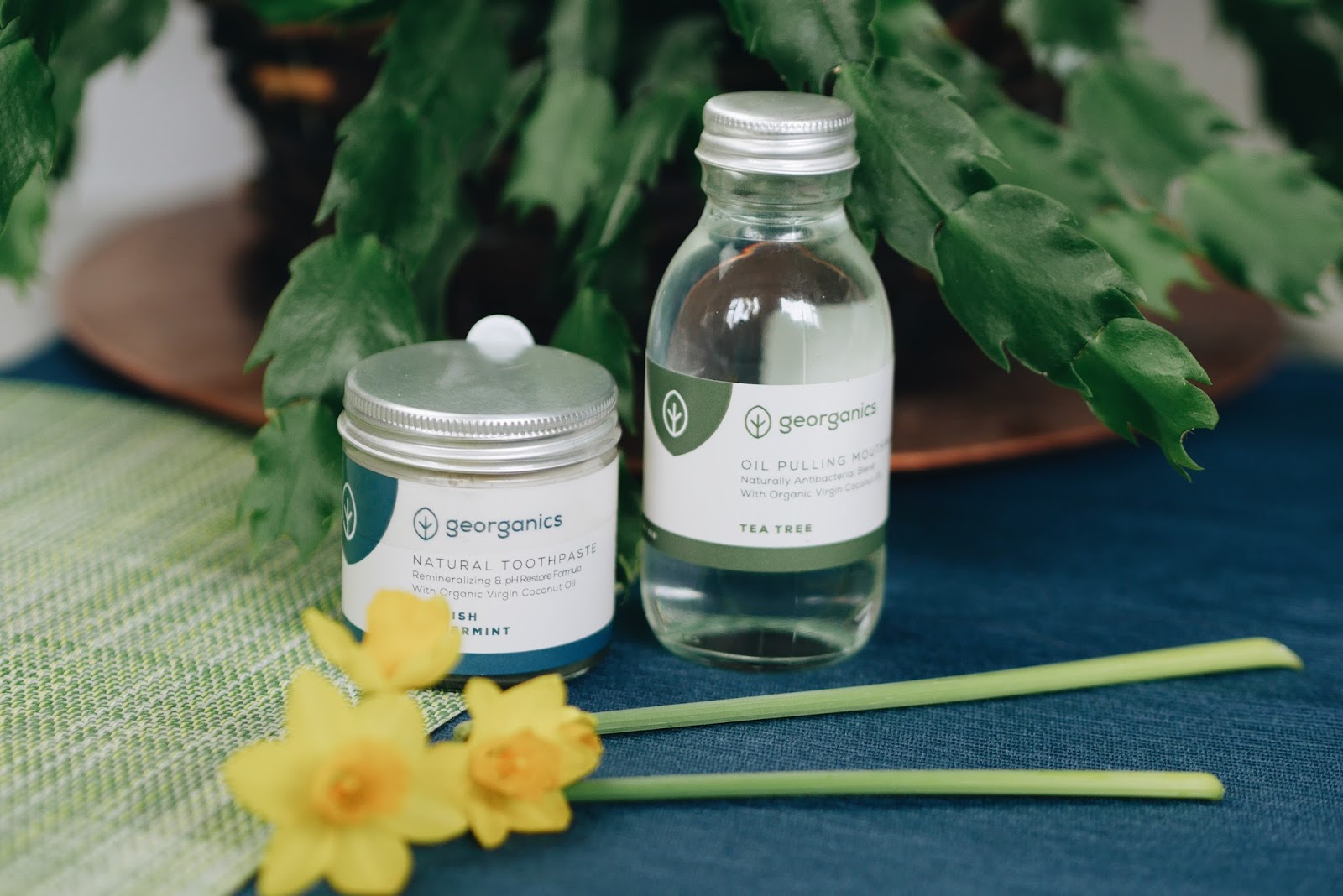 I have to admit that a few years ago it wouldn’t have even crossed by mind to consider what I was putting in my mouth for hygiene purposes. That’s a weird sentence that might be misconstred.

What I mean is, that It didn’t occur to me to check whether a toothpaste was cruelty free, let alone Vegan. I would have more than likely just used what ever mum had got from the supermarket, usually a minty and striped variety…and most likely the cheapest if I know my mum (sorry mum). When I was feeling flush I may have treated myself to one that specialises in whitening, but that’s the extent of thought or detail I put into tooth/mouthwash preferences.

But if I’m taking the time to refine my make up bag and try and swap out anything that doesn’t fall into the cruelty free bracket, then it feels a bit odd to stop there. At the very least I should where possible explore what else from my daily routine I can be more thoughtful and conscious about. 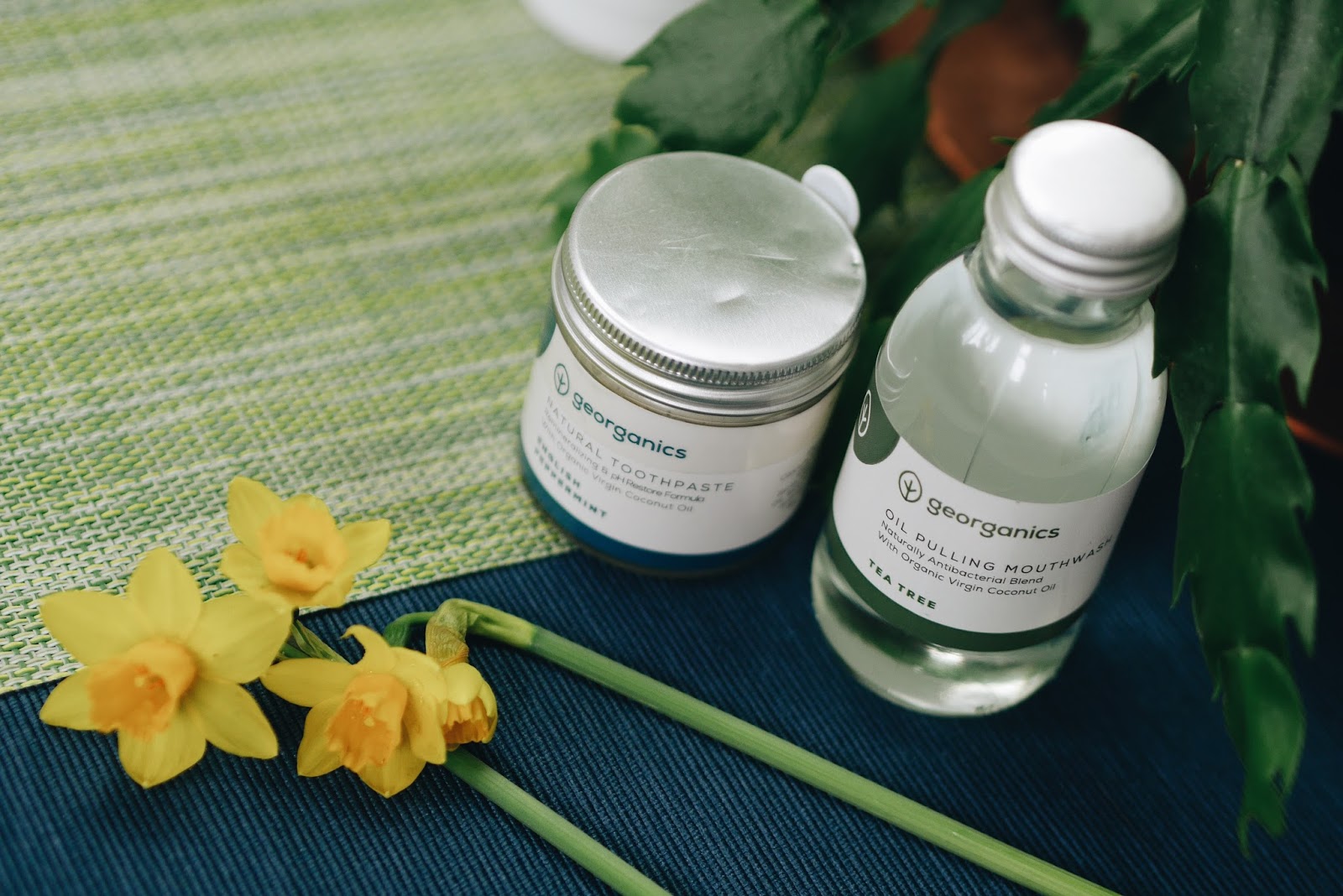 Let’s get the trivial stuff out the way first. The packaging is simple and effective, as is the twiggy logo, so it should fit quite nicely into most bathroom settings. The lid of the mouthwash makes the bottle looks slightly medical but I quite like that, I don’t need everything to be rose gold and decorative – this has a more minimal feel, which is probably a bit cooler. The size of the products make them practical for travel too, neither too bulky. 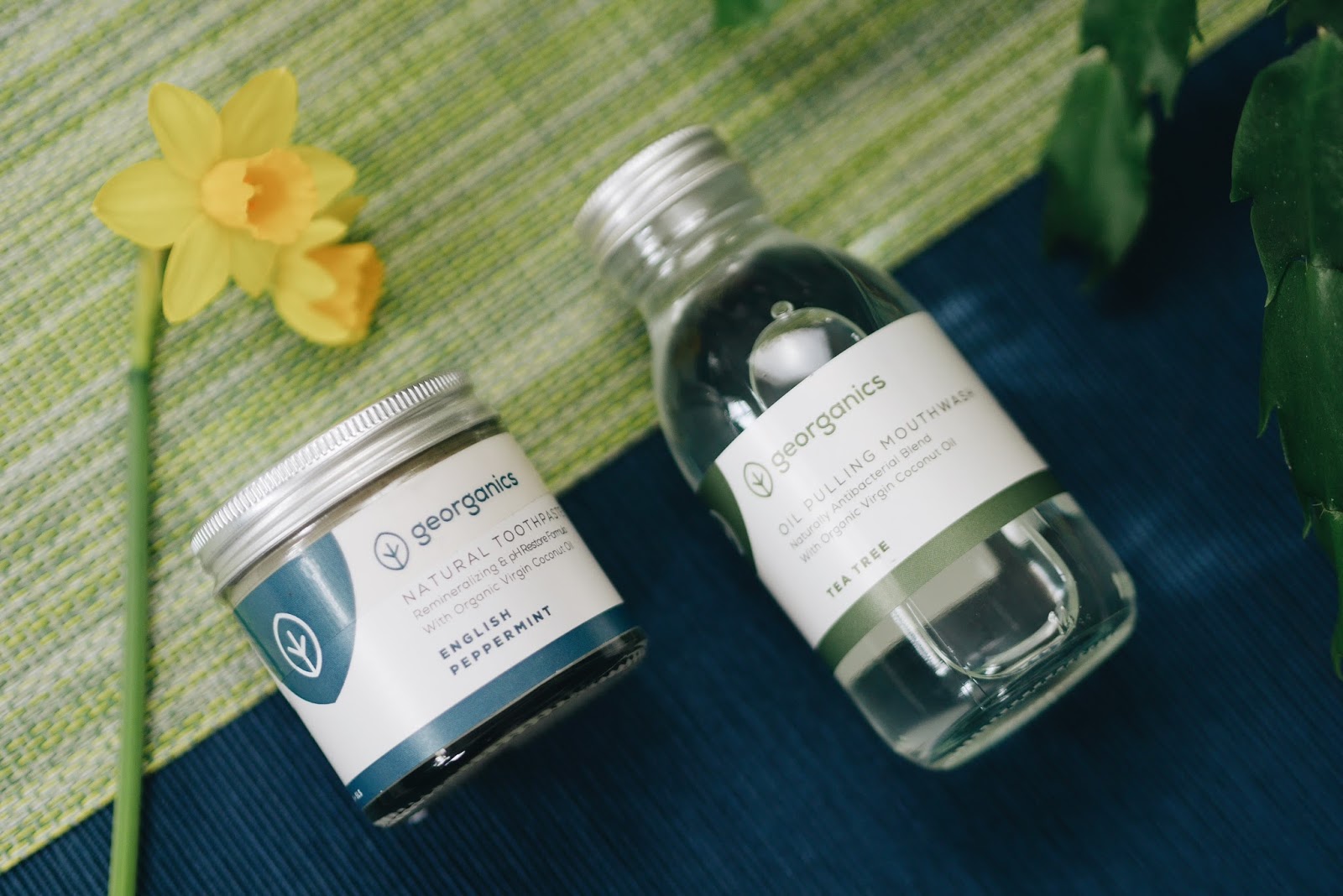 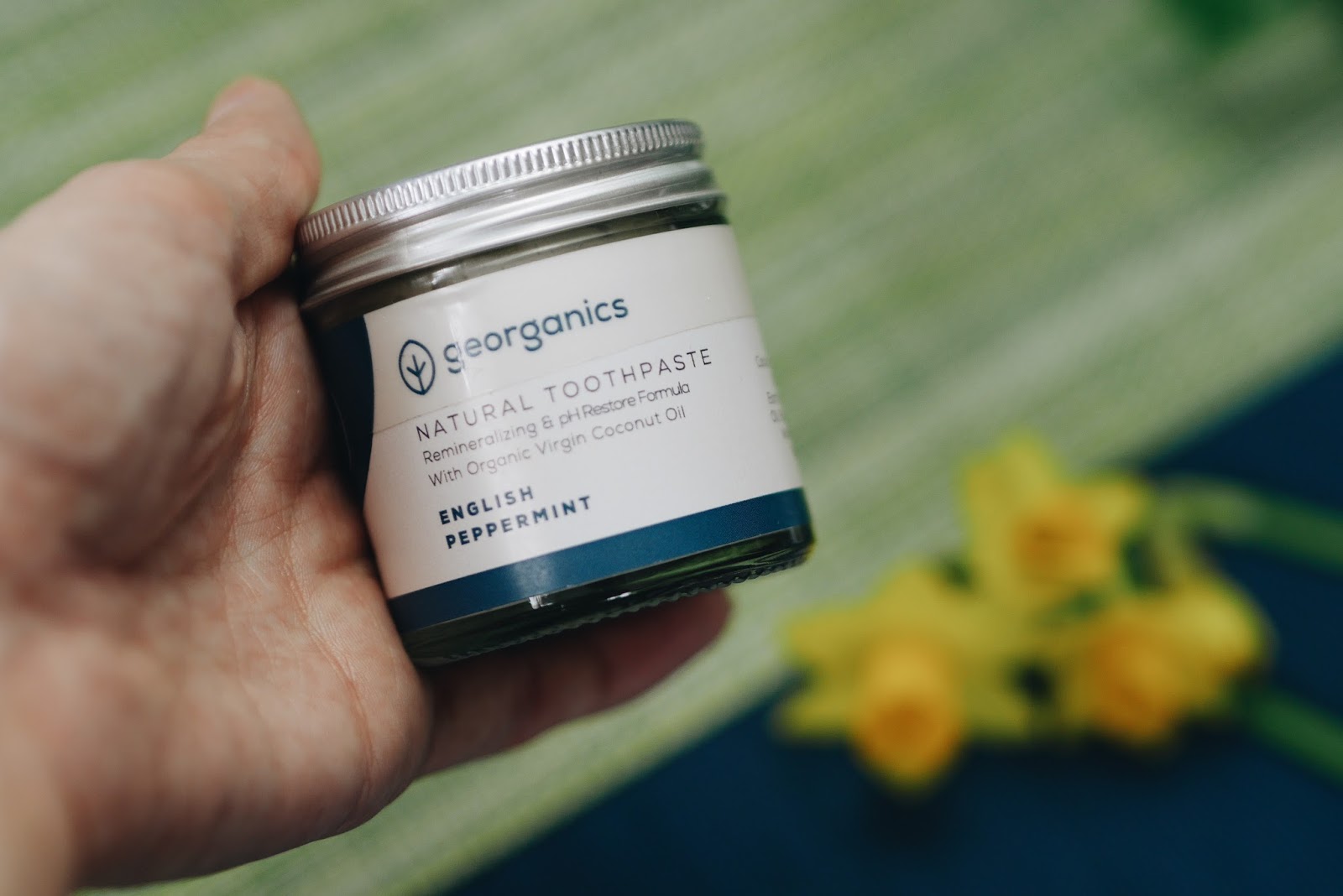 Let’s go with the order of use and start with the Natural toothpaste, a remineralizing and PH restore formula with Organic Virgin Coconut Oil. I was given the English Pepperment version, but there is also Ginger, Pure Coconut,  Red Mandarin, Spearmint, Sweet Fennel, Tea Trea and Activated Whitening Charcoal. I’m glad I was given the English pepperment to sample because I feel like the minty flavours are less likely to freak a natural newbie out. After-all many of us have been brushing our teeth with minty flavours twice a day (when we’re not feeling lazy) for all of our lives so the fennel might have been hard to adjust to.

The mention of the PH restore on the label stood out to me. PH is something that has been brought up a lot in my life over the last decade, usually in relation to my poor gut health, so I know just how integral to our general wellness. We also know the importance of maintaining good health ‘down there’ with many ‘how to look after your lady garden’ type articles screming the importance of avoiding harsh body washes, scrubs, lotions etc from our nether regions. So if you think about it logically MOST of us have more foreign objects entering out mouths than our vaginas so it’s just as, or even more, necessary to try and maintain a healthy level there. 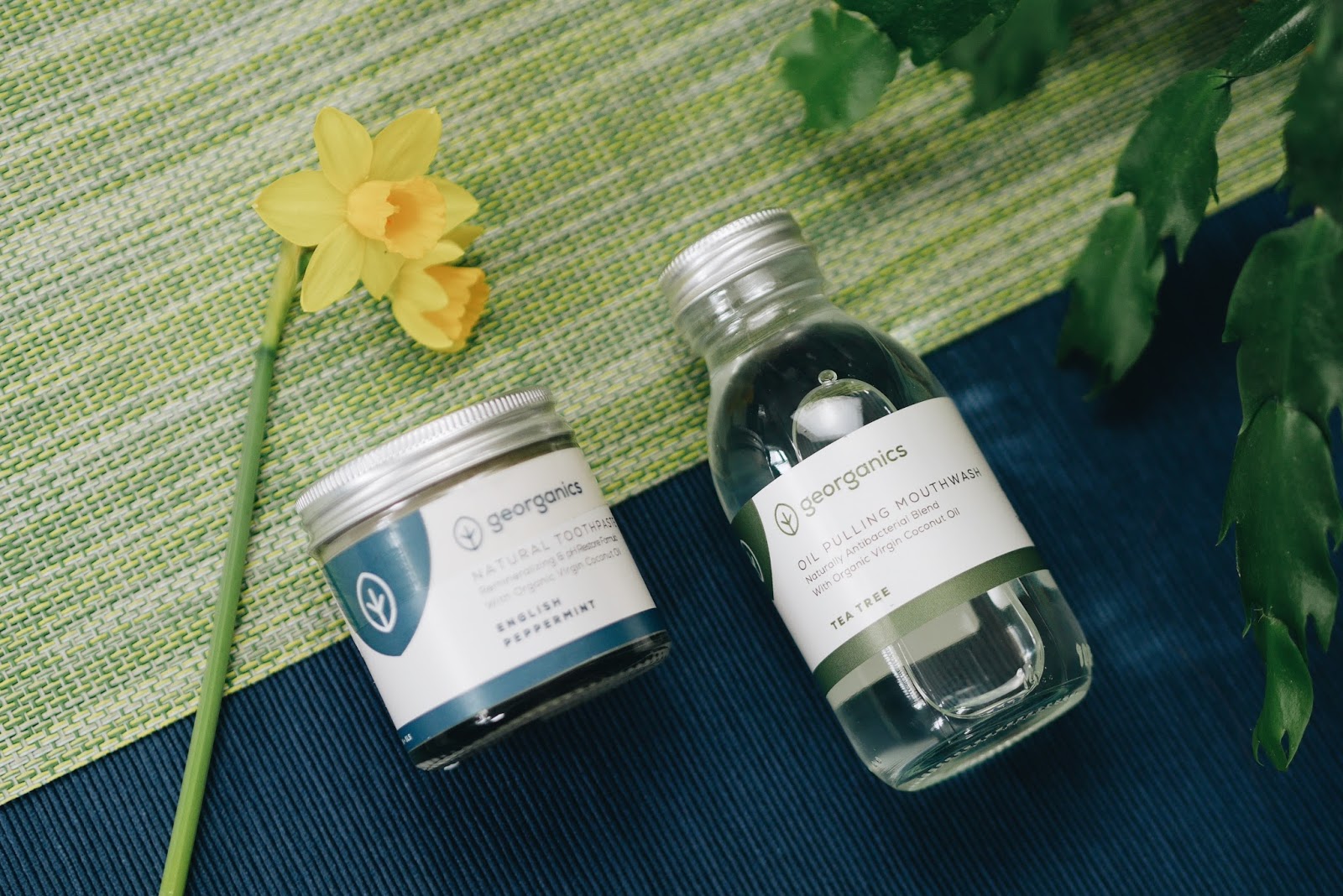 You sherlocks will have noticed that this minty paste doesn’t come in the usual tube format, which tells you that the application may be a little different to what your used to. You need to use the little spatula to apply a pea sized amount of paste to your toothbrush. The paste is an off white in colour and looks like slightly moistened clay (that’s probably the clay that’s in it!). The label instructions advise you to brush for three minutes. I’ve got to be honest that this is a bit longer than I would normally brush for, so I don’t know whether I’m just always making the process too speedy (because I’m desperate to dive into my duvet) or whether this product requires longer brushing time than the average toothpaste to be effective.

You don’t get the stingy zing of minty refreshment you get from usual toothpaste because the flavour is a lot more subtle. It’s one of those flavours you experience more from it’s aroma than it’s taste, I think. It also doesn’t froth in the mouth in the same way either so it doesn’t feel like it’s spreading round all the gums and inner mouth landscape as much as my usual white striped stuff.

The taste is absolutely fine though and there is nothing unpleasant about the experience at all. You just don’t have that super clean feeling you have with the normal tubed toothpaste. I do think we have been conditioned to associate mouth hygiene with that almost stingy freshness though, when it might just be a pleasing accompanying taste/feeling to the process/genuine hygiene benefits.

They suggest you leave the paste on for extra remineralisation and to go on to the Oil Pulling Mouthwash. 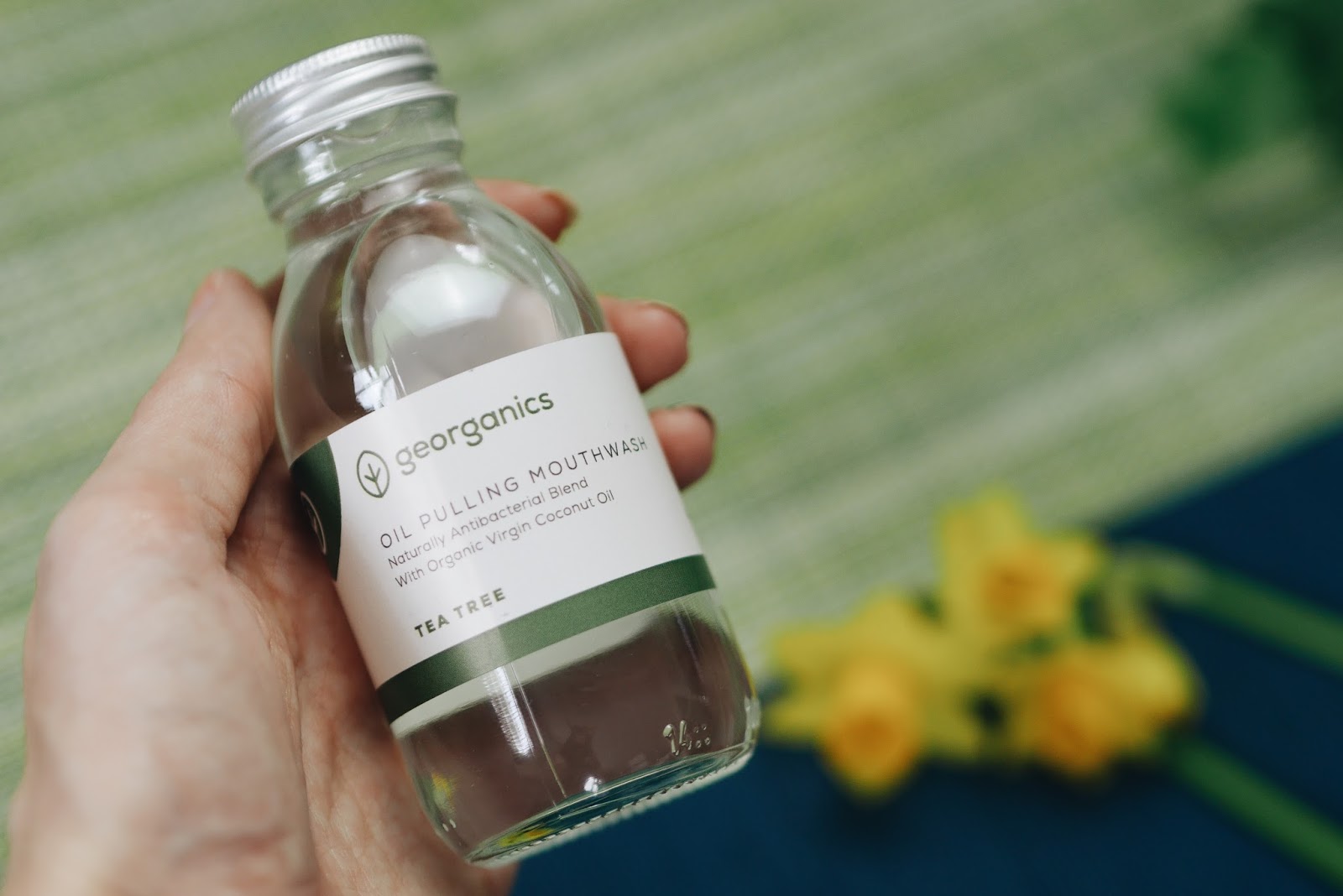 Well, according to Wikipedia Oil pulling or oil swishing is a traditional fol remedy where oil is   “swished” (kavala graha) or “held” (snigda gandoosha) in the mouth. Practitioners of oil pulling claim it is capable of improving oral
and systemic health, including a benefit in conditions such as headaches, migraines, diabetes, mellitus, asthma and acne as well as whitening teeth.  Its promoters claim it works by “pulling out” toxins, which are known as ama in Ayurvedic medicine and thereby

Now, I try and stay balanced here on my blog (although you may argue with me on that) so I should mention that Western medicine isn’t exactly on board with this theory. They frequently state that there is no proof of it’s positive effects and also no information to tell us it’s long lasting effects on the body. But I will just point out that there’s a lot of things that traditional medicine doesn’t understand or know about, I should know as an M.E sufferer. I should also say that I have some hugely pleasureable and helpful Ayurvedic treatments so I’m happy to give this one the benefit of the doubt for now, particularly as it’s got the gold star from me for it’s vegan/cruelty free credentials. 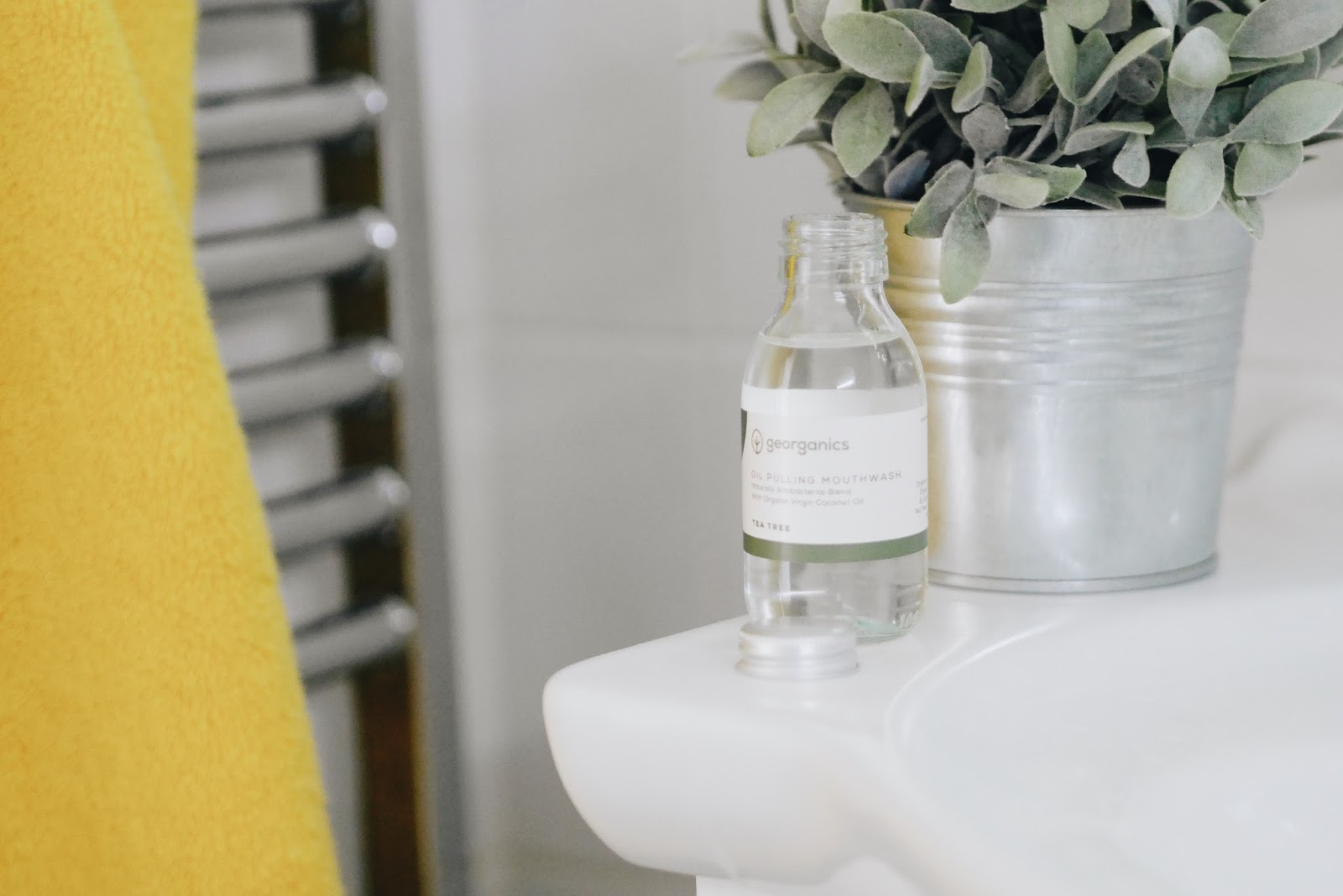 The goodie bag that introduced me to this brand contained the Tea Trea flavour, which is not what I would have chosen, as it’s a smell I tend to associate with the skin. I’ve had success with numerous Tea Tree products over the years, but all have had the promise to deminish swelling of spots or bites. It’s a bit too antiseptic in flavour for me, so I would have probably opted for one of the other flavours, in fact I’d probably play it safe and go for one of the minty ones. 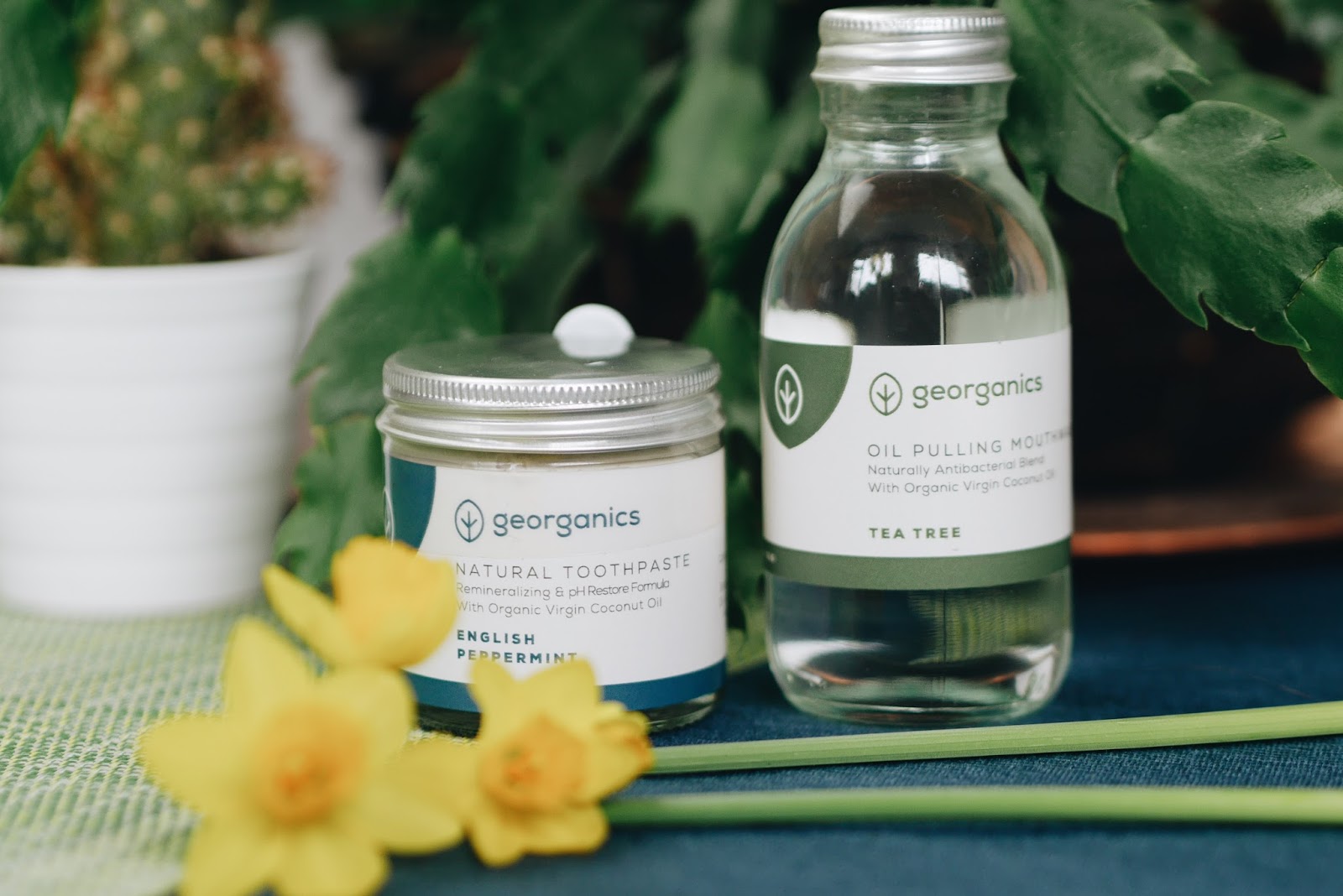 They advise to put 1-2 tablespoons in your mouth and swish it around the mouth for 10-20 minutes – the oil should be a thin white foam when you spit it out.

When I first read the reccommended time frame I was immediately turned off and I think I even said ‘jeeeezus’. Every minute is so precious to me with my hectic work schedule and constant dire need for as much sleep as possible, so 20 minutes of mouth swishing sounded like a huge waste of valuable time…and again, a lot lengthier than the usual mouthwashing process.

But I’ve given it a go and you know what, you don’t have to stand on the spot staring into the bathroom mirror. As long as you don’t get over excited with the swishing and spurt oil out of a gap in your lips, you can pack your bag, reply to emails, upload to instagram, straighten your hair or anything else you normally need to get done at this time of day.

My breath didn’t feel particularly fresh at the end, so I didn’t feel as confident about breathing on people as I usually do after a thorough mouthwashing session.

However, I’m guessing that over time the PH regulation that will occur may prevent mouth odour from happening in the first place, so that lack of noticeable minty freshness may not be a big issue after using this product for a lengthy period of time. 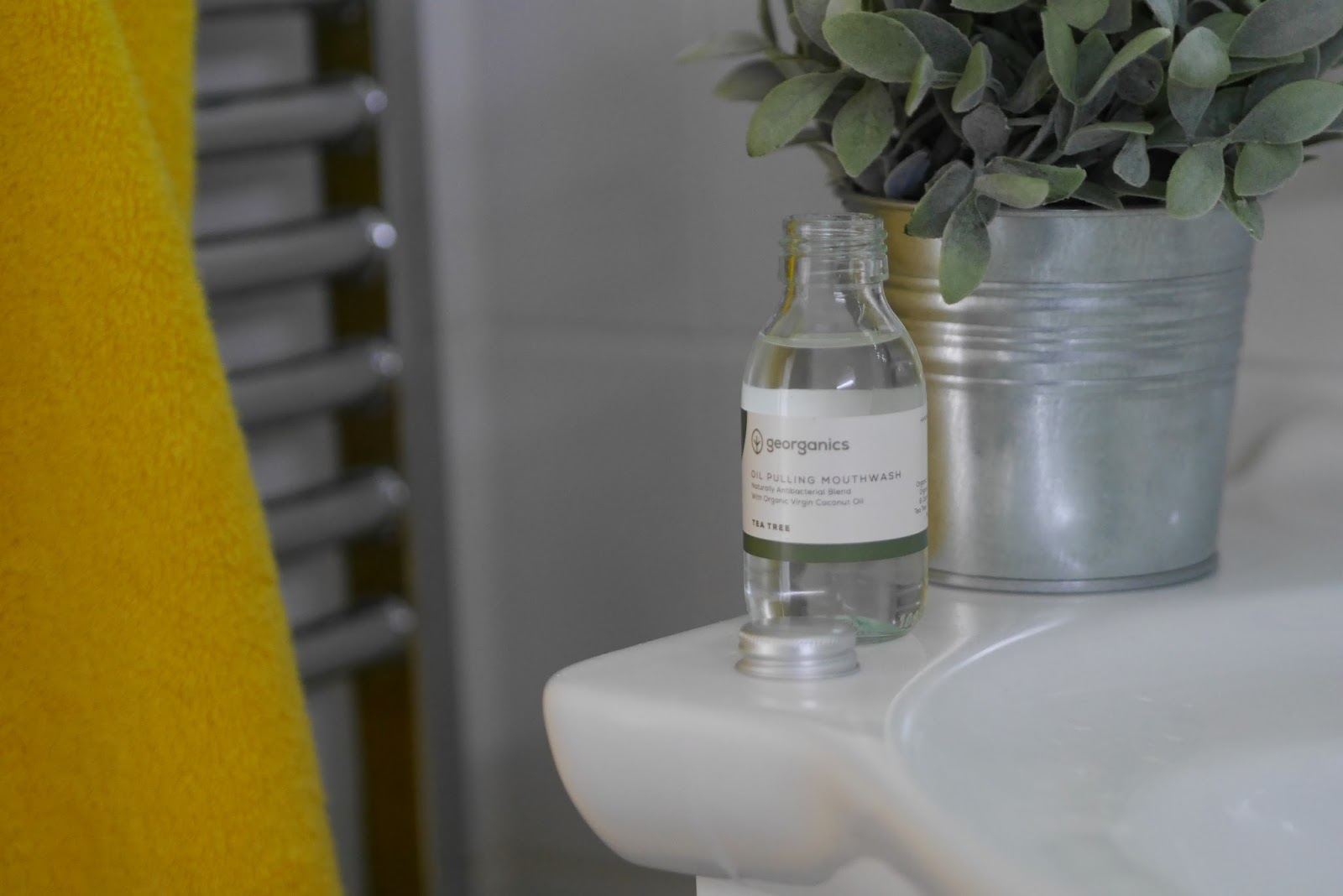 So my final thoughts are to persevere, like a lot of adaptation you have to make to become a more ethical/environmentally responsible person there is an adjustment period. You have to change habits you may have had for decades, and also train your tastebuds via repetition to accept an alternative version to something it had become accustomed to. Overall it’s a great product that will hopefully show health benefits the longer I stick by it.

I’m eager to try differnt vegan/natural/cruelty free hygiene products so please do let me know of any items/brands I should look into.

Would you give this product a go and consider swapping out your existing toothpaste/mouthwash.