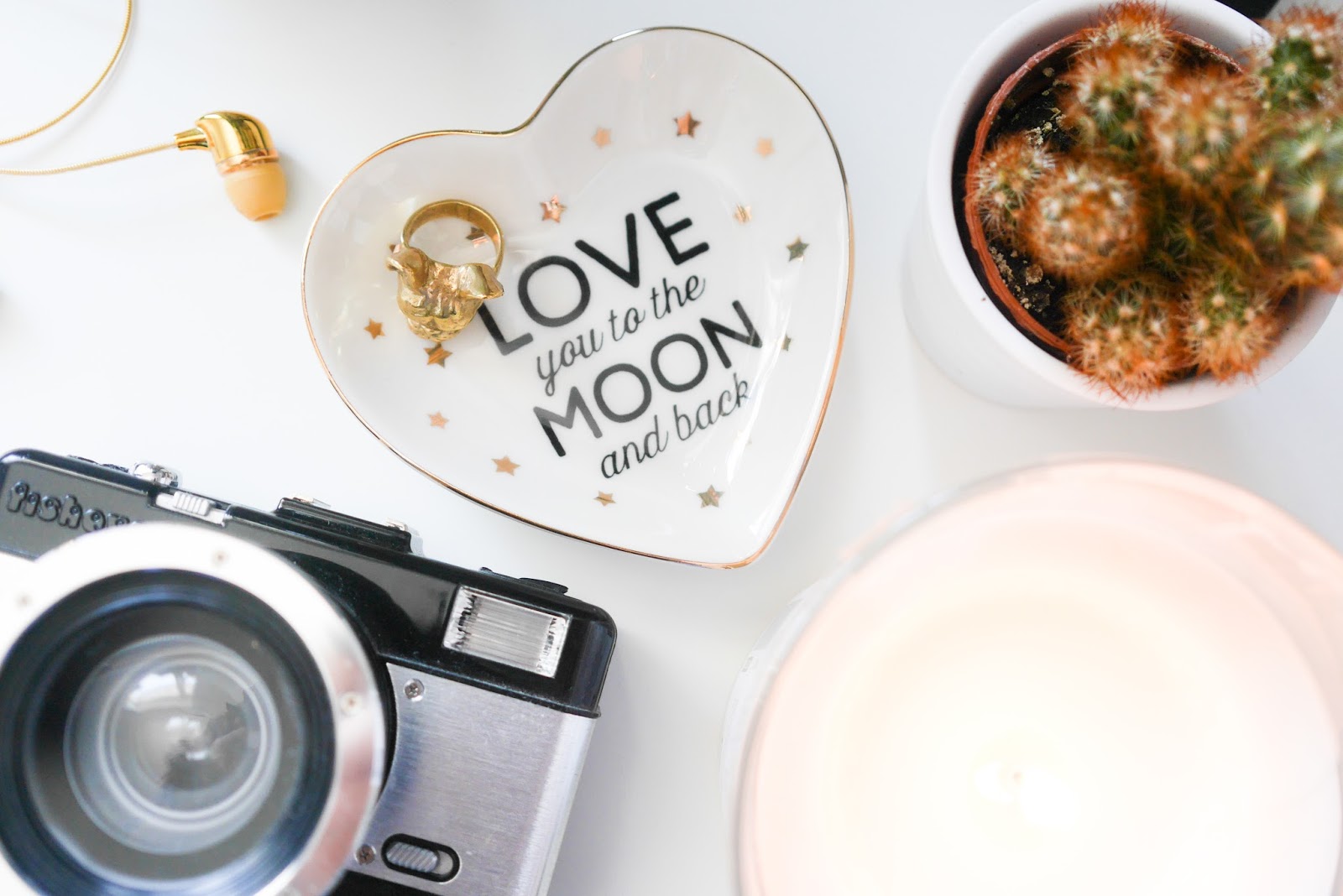 So lately you will have read numerous post and captions commenting on the fact that I’ve heavily reduced my expenditure. There haven’t been any fashion hauls on my channel, in fact the only new item i’ve bought this year has been a £15 Boohoo dress for the Fifty Shades Darker Premiere. Now I know once festival season kicks off, and if the small chance of a holiday happening, I will probably revisit those online stores and grab some new garb, but for the time being I’m still trying to resist the urges to spend on things I really don’t need…well, to a point.

Like everything, it’s all about balance. Even though I have some sponsored work coming up and therefore some money coming in, I’m not going to be splurging, nor will I be buying things that cost more than they should because of their label or cool factor. However, I will purchase those things that can contribute to my mental wellbeing and general happiness, and those little twee objects that can inject a few smiles into your day merely via their presence.

Another thing I’ve been harking on about is my lack of work space in my house. Up until last week my bed was pretty much where I did all of my drawing, editing, emailing, writing etc. This situation has lead to tears and stress, on numerous occasions, as well as tensions between my partner who didn’t want our bedroom to be a place associated with business…and well, constant mess.
Si and I finally decided do something about it, even if it meant taking on work that shouldn’t have been ours, because we knew the eventual benefits would be great. So we asked my brother if we could have permission to sell some of his bits and bobs, which would free some space in his old bedroom….space that could be utilised by a desk.

Once we sold his drum kit via Facebook, the indents in the carpet where it had lived, neglected and unused for so many years, signalled a new start for me and my work. With a bit of rearranging, and shuffling of the boxes of junk my brother is yet to sort through, there was definitely room for a desk and chair – a place that I could stamp as my own. MY OWN MINI OFFICE…..YAY! Sorry I lost my composure for a bit there.

In the absence of my own house to decorate, this slimline desk would be a small part of my parents house I could put my personal stamp on. I know it probably doesn’t sound like a big deal, seeing as most of you probably have your own places that you’ve been able to decorate in full, but to me it was a little glimmer of hope, something that signalled just a little bit of progress. But not just that, it also meant I may finally have a place to work that would have uplifting natural light streaming in (my bedroom is horrifically dingy and painted dark red). It would mean I wouldn’t be stooped over and adding extra ache to my already creaking back, in fact I’d have perfect posture in a bonefide grown up office chair. I’d hopefully be disturbed a little bit less too with useless tit bits of information like ‘just letting you know, we’re off to the dump’.

The £15 pound desk we thought we were going to get from IKEA didn’t quite cut the mustard when situated amongst the array of fancier options in the office area of the store. In the end we fell for the allure of having a desk that had a clutter hiding draw each, and reasoned that it was worth the extra £45 – who knew drawers were that pricey? 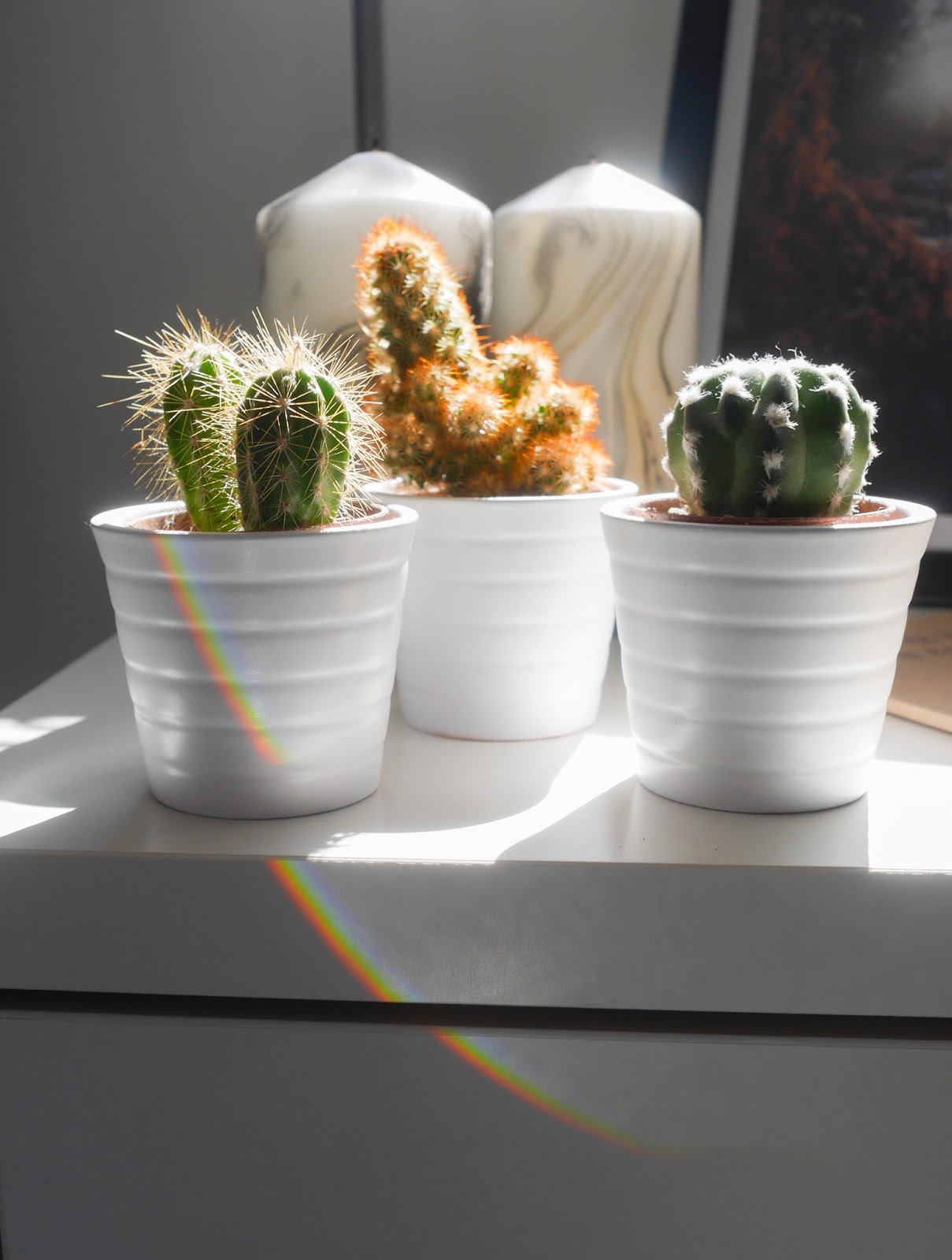 So once built and pushed up against the bedroom window I decided to add little bits and bobs to make it feel like a real office/sanctuary – the perfect combination of efficient and practical with homely and inviting. I added some candles, courtesy of my clever friend Charlotte who makes and sells them all herself (Clueless Candles), Some aesthetically pleasing ice cream coloured pots and tins to hold my art equipment in, and some tiny Cacti and faux plants from IKEA. You know the usual Pinterest fodder.

The only new purchase to add some cuteness to my desk space was this jewellery bowl from Prezzybox. I know it doesn’t scream office space, but it’s these kinds of small objects that give a space that cute homely feel and make the prospect of spending 13 hours at your desk less horrific.

When I grew up I never understood my mums obsession with little boxes, tiny bowls, and minute glass bottles. They didn’t seem to have an obvious or necessary function or purpose, but they were littered all over the house. They seemed to make mum happy though, and it least it gave us something we could always buy with success when her birthday came round.

Now, as an old fart too (sorry mum), I totally get it. While I’m definitely hoping for a fairly minimal decor in my future home, it’s not going to be at that level of feeling empty, soulless and clinical. The space will be punctuated by trinkets, nick- nacks, mementos, teeny tiny versions of things, because they bring joy, warmth and personality into a home. 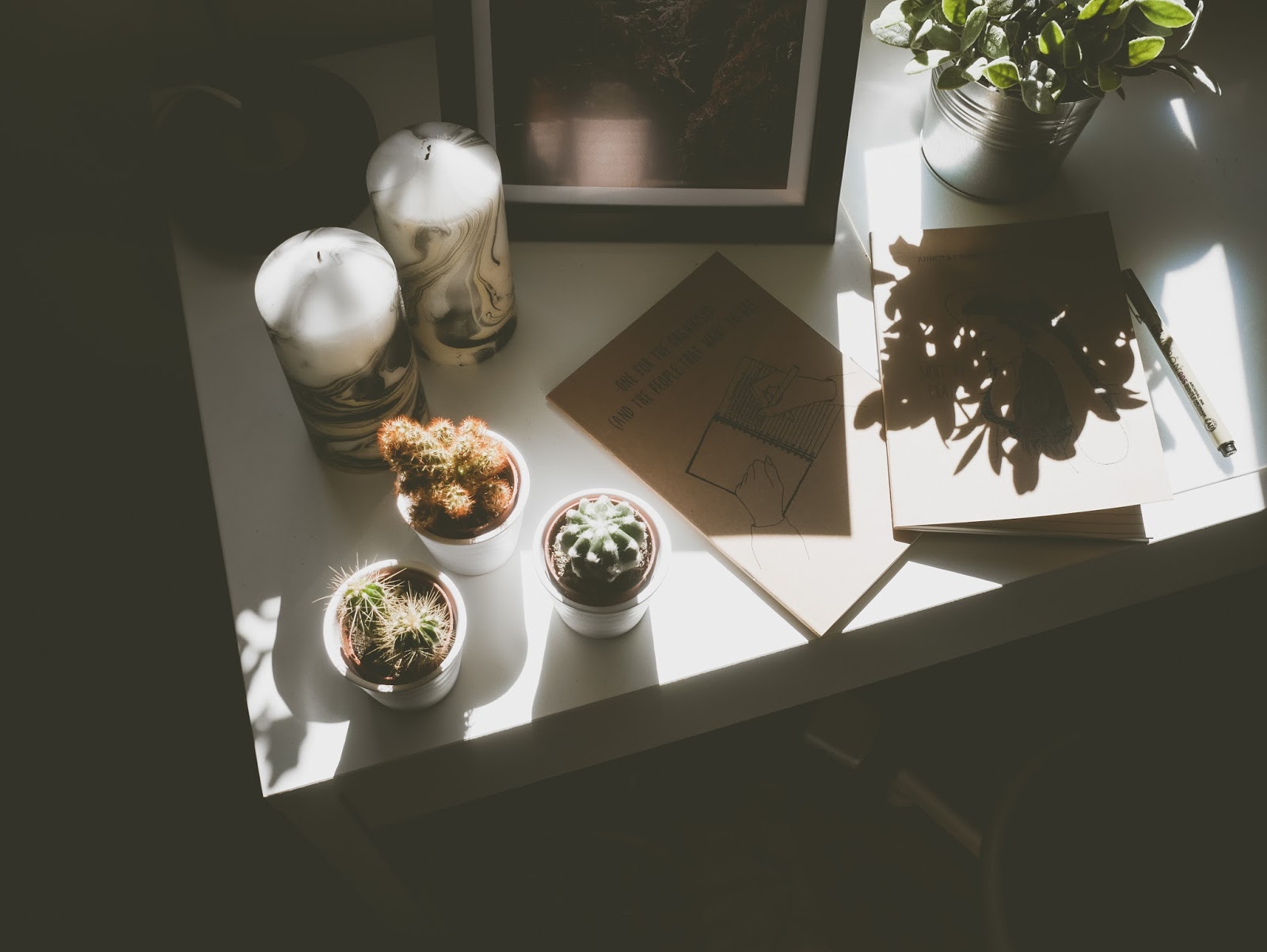 While this brand new bowl doesn’t hold memories just yet, the text scribed on the china does hold some personal significance. Even if it didn’t though, it’s just nice to have things with cute, uplifting or positive message around where you’re spending the majority of your day.


It’s position placed on the corner of my desk is fairly new, but I’m sure it will be the place I rest my rings when my finger are swollen from too much typing. The bowl may be where I’ll put my Rose Quartz crystals (in an attempt to send loving vibes to all my potential clients). Who knows, it may end up being where I put my much chewed flavourless gum, or pips from a fruit based snack (although the latter is very unlikely considering I try my hardest to avoid fruit). 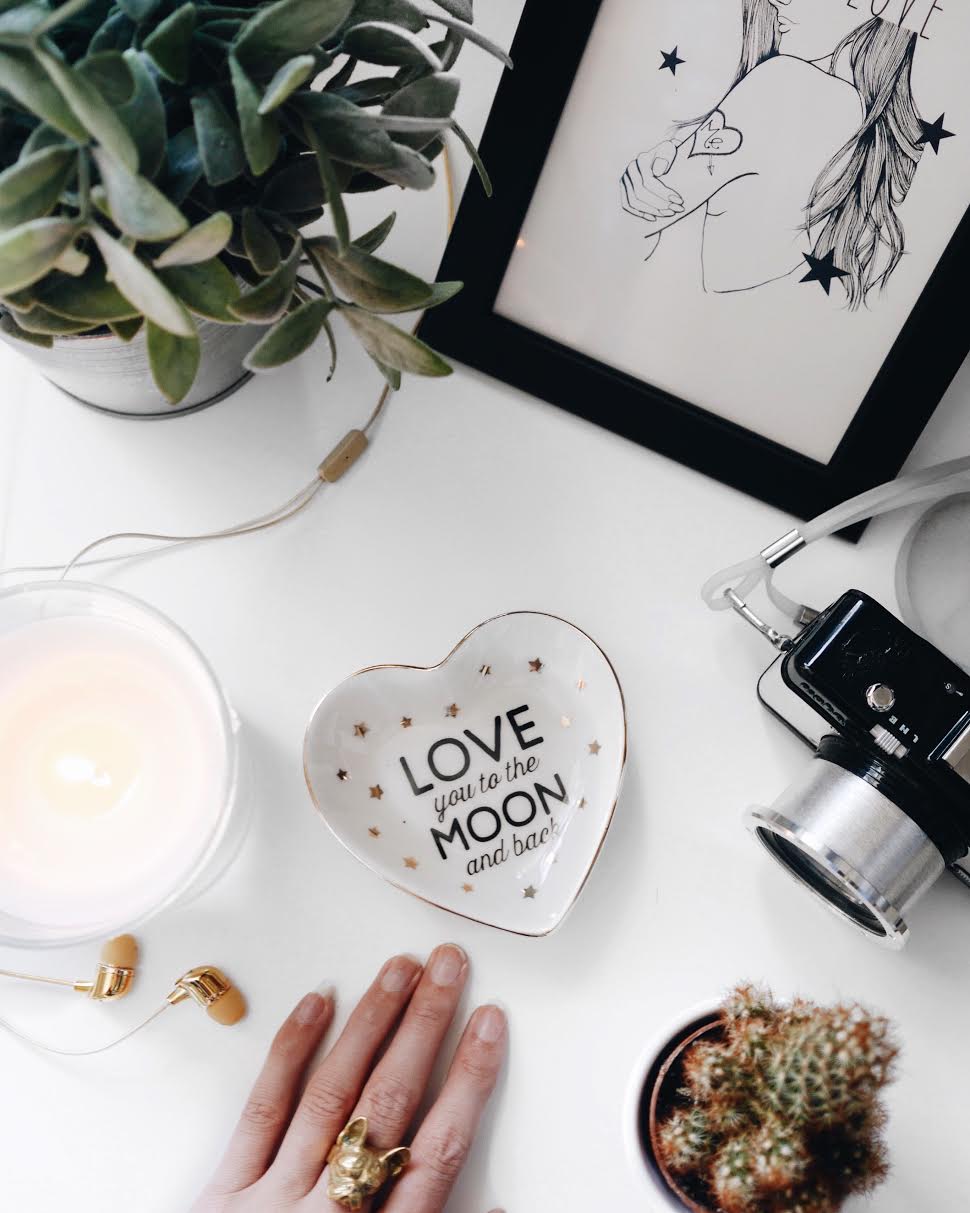 So despite wanting to de-clutter my life, what I’m saying is that sometimes it’s about swapping out the objects that don’t bring any happiness to you life, for the ones that do. Perhaps it’s more about treating yourself to those one-off small objects that can raise a smile, rather than splurging on lots of things that almost blend into one temporarily uplifting experience. Too many this little bowl may seem trivial, needless, even pointless, but to me it’s a lovely part of an environment that makes me feel happier than I’ve felt in a long time while working away. It’s also part of a space that’s allowed me to briefly dabble in adulthood, and indulge my extreme yearning to decorate a home.

Like I say about most things in life, whether it be a gesture of kindness, or the natural and wonderful occurrences that pop up during the day….it’s all about those small things. 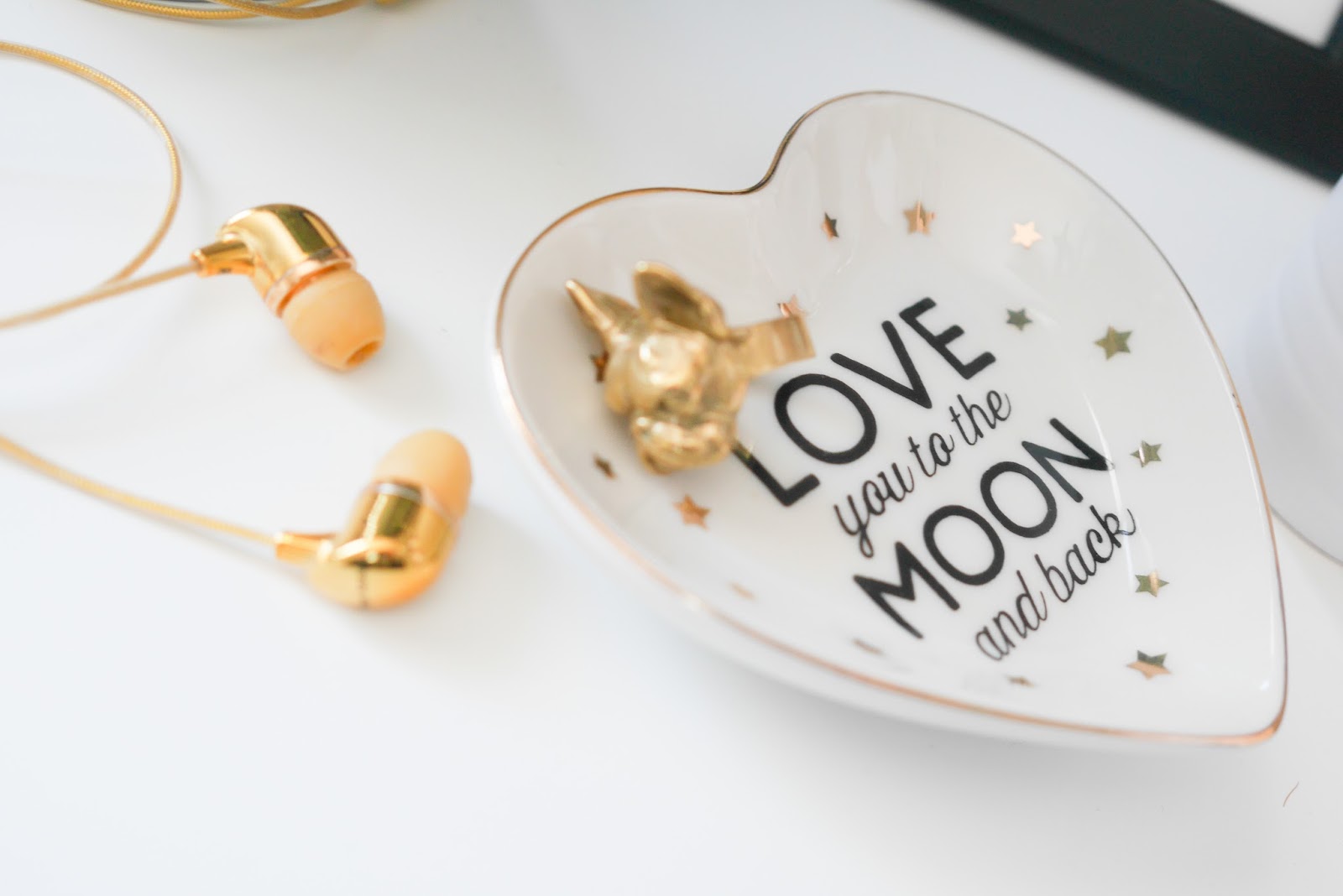