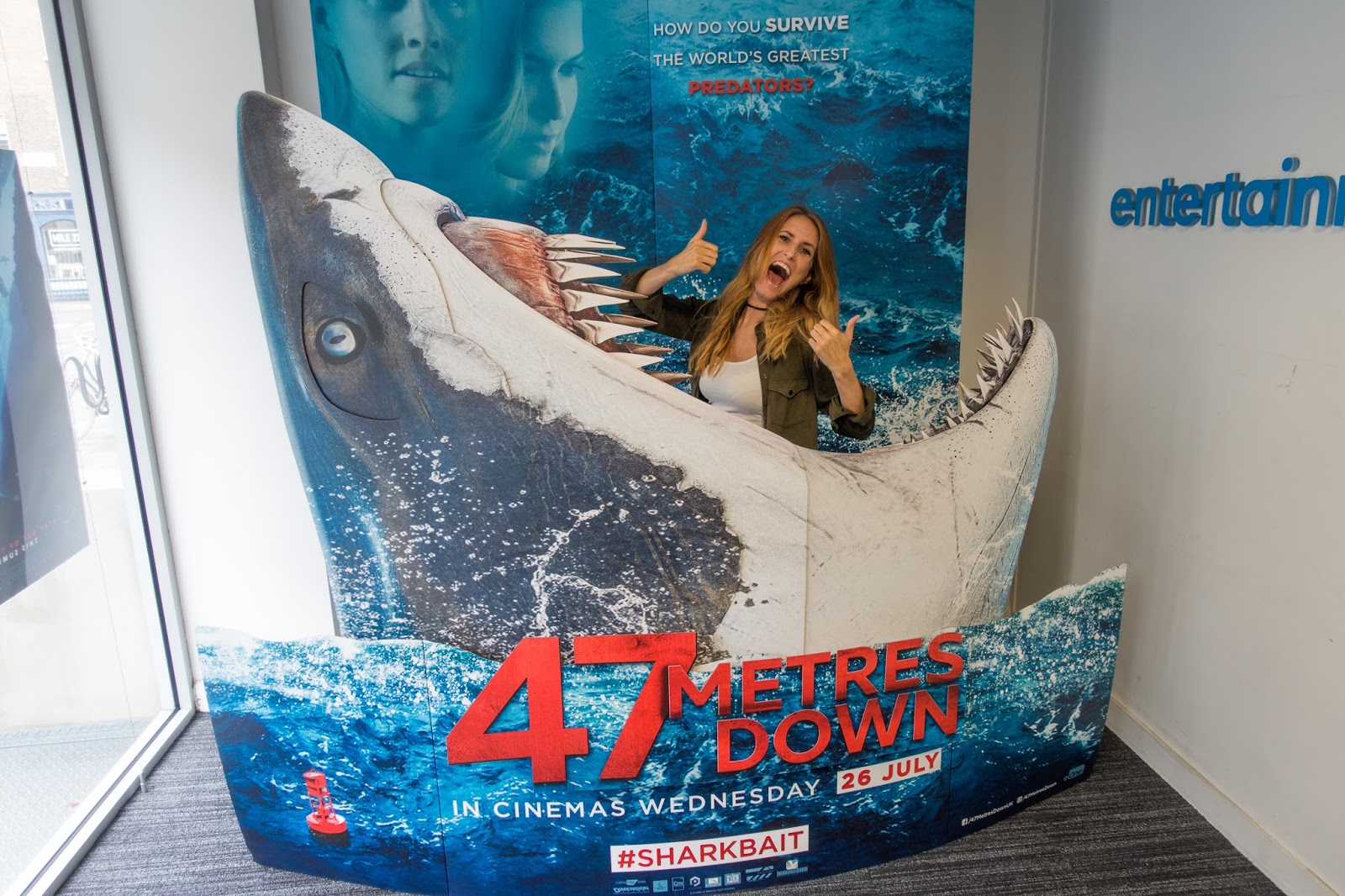 Not much scares me in terms of activities the many would deem extreme or scary. I’ve jumped out of a plane a couple of times and prepared myself for my first time doing so with a couple of bungee jumps, one in an urban location, another over water. I’ve tried wind-sailing, skiing, snowboarding and water rafting….but that’s where my fearless self came unstuck. Unfortunately on the rapids my kayak capsized and I found myself under the boat and trapped somehow under the water for what seemed like a dangerous amount of time. It was unfortunate, as I was just at that point of allowing myself to enjoy water, finding serenity in rowing down the Ardeche in my bright orange canoe and basking in the 40 degree heat of the valley. It had taken a while to get to that position too as an incident on the water slides at Centre Parks as a youngster, when a hefty bloke decided not to wait for the green blight before coming down, landed on top of me and pushed me deep into the water had haunted me for years. The reason I’m sharing my personal water based traumas with you is to help you understand why a film of this nature makes me react in a way many other films wouldn’t.

I don’t scare easy when it comes to horror movies, and it’s annoying because I want that thrill, increase of heart rate, and the goosebumps that many of my friends get. Unfortunately I seem weirdly resistant to it…we joke that I’ve got Unagi (Friends fans will understand). However, scenes or movies that focus on water based terror make me feel incredibly tense and anxious. So even before I read the synopsis of this movie, the visuals of water featured in promo pictures told me enough to know I’d find this movie a tough watch at times.

First up, I was chuffed to see that Mandy Moore was starring, I’ve loved her since the tearjerking A  Walk to Remember, but have had a recent boost of affection due to her role in the amazing This Is Us. She stars alongside the beautiful Clare Holt (Pretty Little Liars, The Vampire Diaries), but it was also a welcome surprise to see Matthew Modines legendary face again. 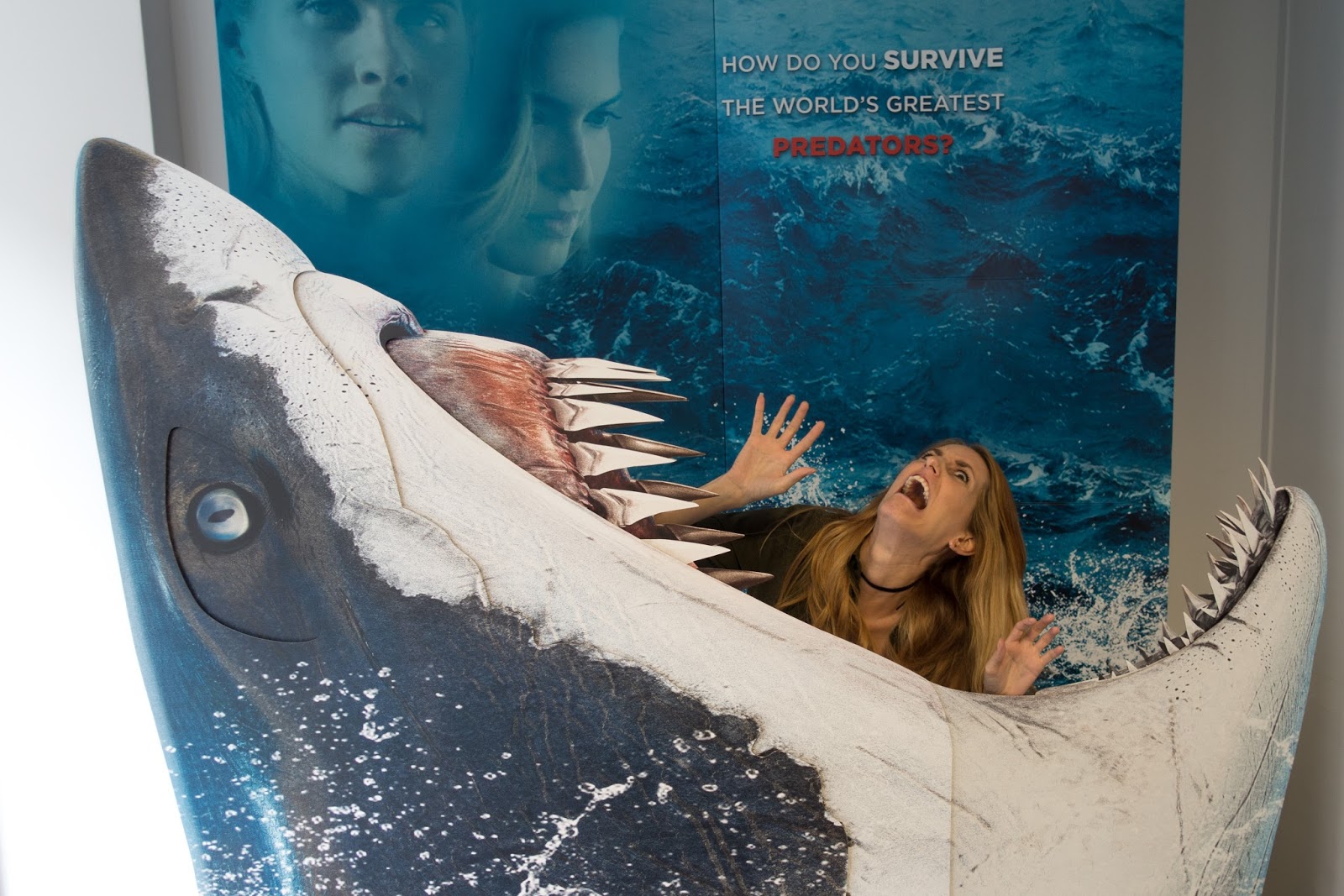 I’m not going to drown you with spoilers, but I’ll give you the general splash. The two sisters are on holiday in Mexico together after Mandy’s husband was unable to join her as originally planned. The younger more adventurous sister, Kate (Holt) wants to up the excitement level of their holiday in more ways than one. After an evening of cocktails and dancing with some rather fetching locals, they’re convinced to join them on their boat the next day where they do cage dives to view the sharks. Lisa (Moore) is extremely hesitant being the more reserved of the two, but in an effort to please her sister and prove another point (you’ll know what I mean when you see the movie) she agrees, despite her obvious fears. She lies to the instructor that she has had Scuba diving training like her worldly sister, which is an early warning sign to anyone that knows how these films tend to go, that all is not going to go to plan.

There are a lot of B movie elements to this movie, particularly the script. Yes, some of it’s cheesy, but I actually wouldn’t have it any other way, as it helps to give it that old school horror/suspense charm. You’ll hear numerous lines that to the trained horror-ear can only signal some sort of trauma or doom for the main characters, and I love that feeling of ‘oh god, what’s coming next.’ Mandy Moore is great at being that slightly annoying person in a situation of stress, who states the obvious but also feels the need say unhelpful truths that really don’t need to be vocalised. I genuinely liked this about her performance as it gave these tense scenes a bit of lightness.

I’m not going to say much more now, for fear of ruining it for people willing to go deep into the ocean at the cinema this weekend. But just know, that if you’re like me you have a fear of drowning or water in general, this will be your worst nightmare depicted on screen. You palms will sweat, you’ll want to cancel that beach holiday immediately, and all those memories of watching Jaws for the first time, open mouthed and petrified, will come flooding back. Did it deliver what it promises, from a water phobic, yes it did, but be prepared for a nice bit of cheese with that salty water too.

So feeling drained from anxiety, or as if I might have been effected by the bends via some sort of cinematic osmosis, I headed to the Southbank to try out the Virtual Reality experience they had on offer for one day only. 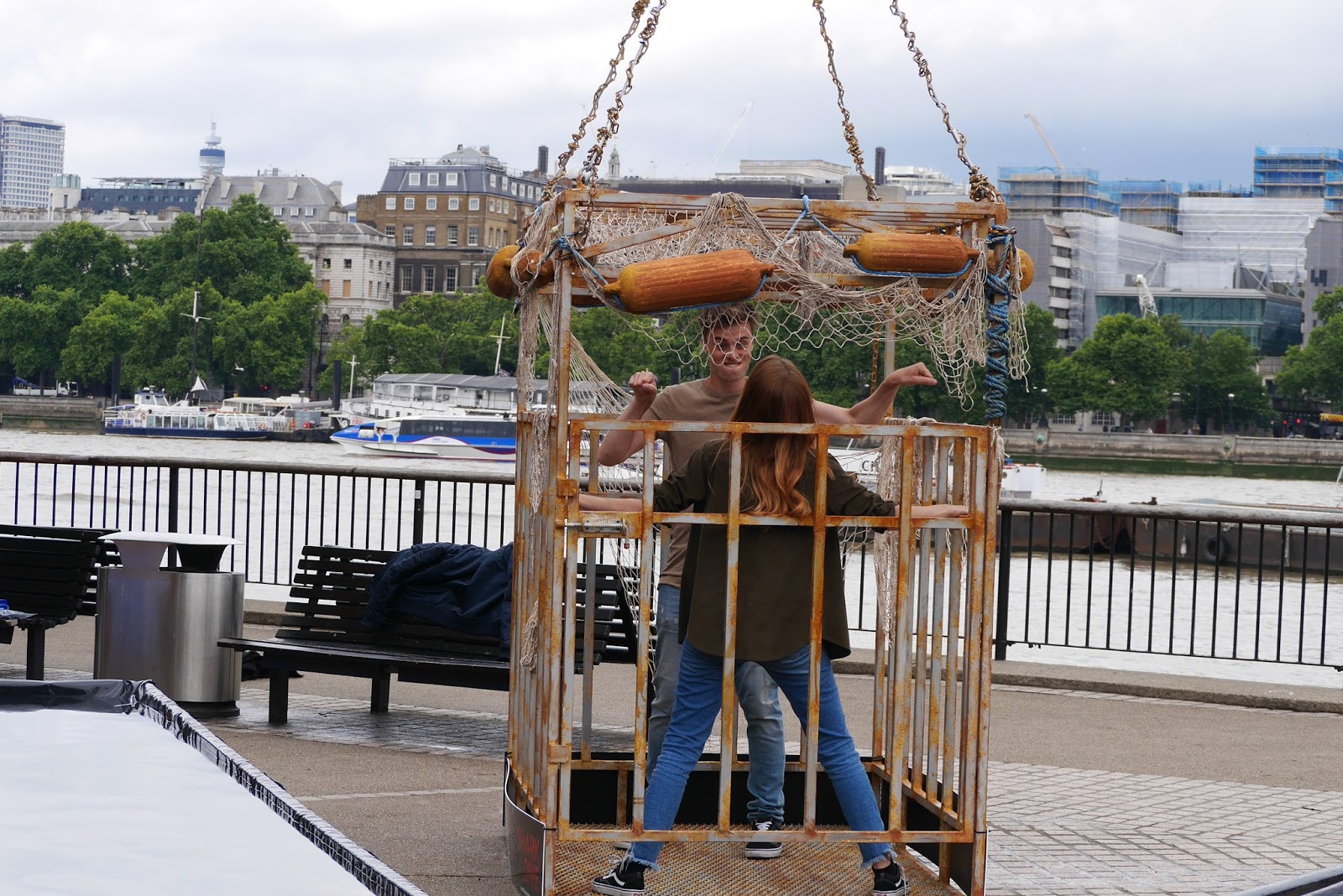 The Shark Dive experience would see willing participants enter a rusty cage very similar to the one we’ve only just witness ruin lives. They/we would then be suspended a few metres up in the London air above a shark. Okay, it wasn’t a real shark, but it was still a very brave thing to do okay?? 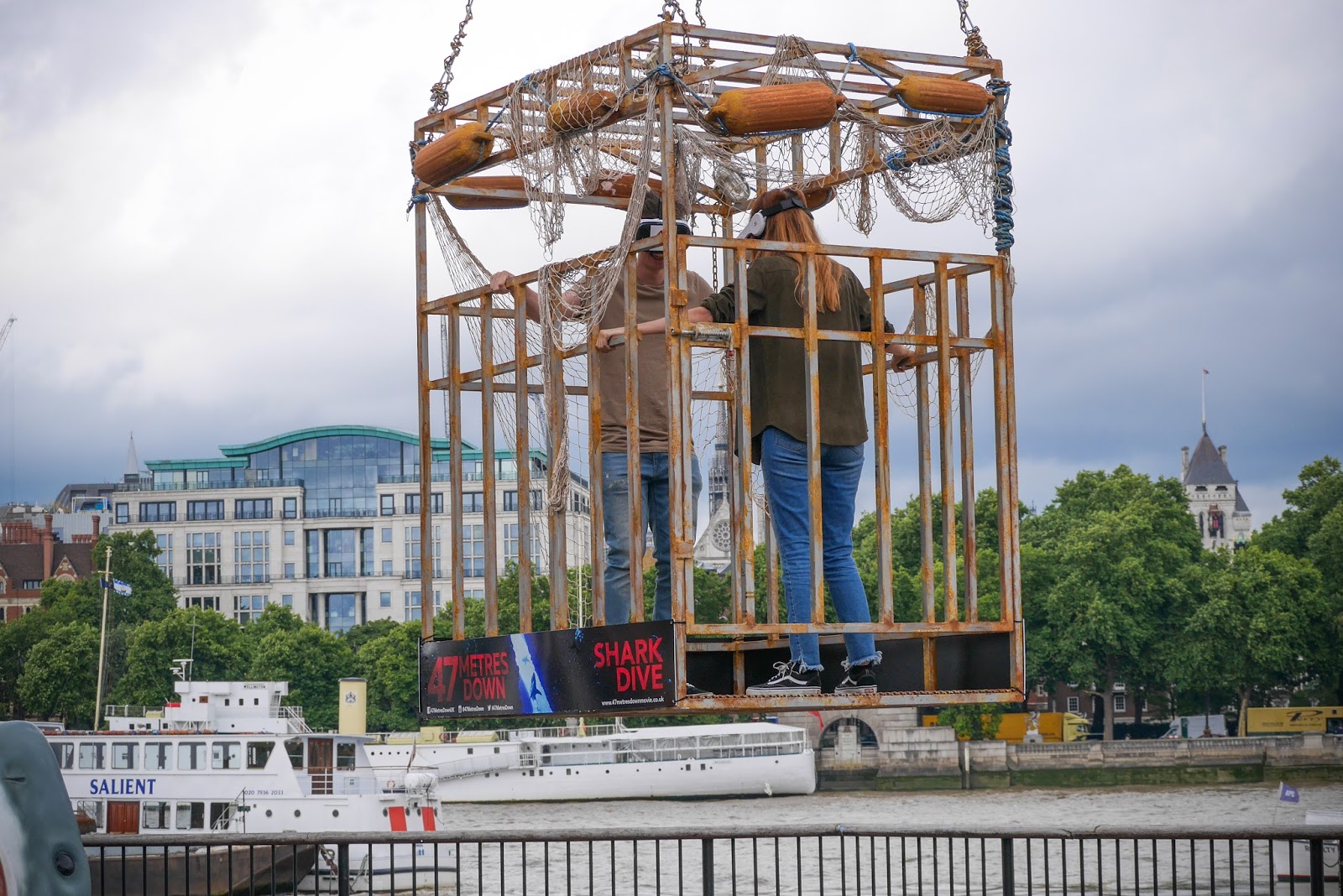 I was teamed up with Comedy facebooker and good pal Joe Tasker. Now, if you know Joe you will be aware of his boundless energy, an excess level of zest which will allow him to intensify anything we are feeling through his actions. In this case he was happy to add to the already multi-sensory experience by throwing in some kicks of the leg and some very shrill shrieks, just to get me really riled up and anxious while my vision was completely obscured by virtual reality. 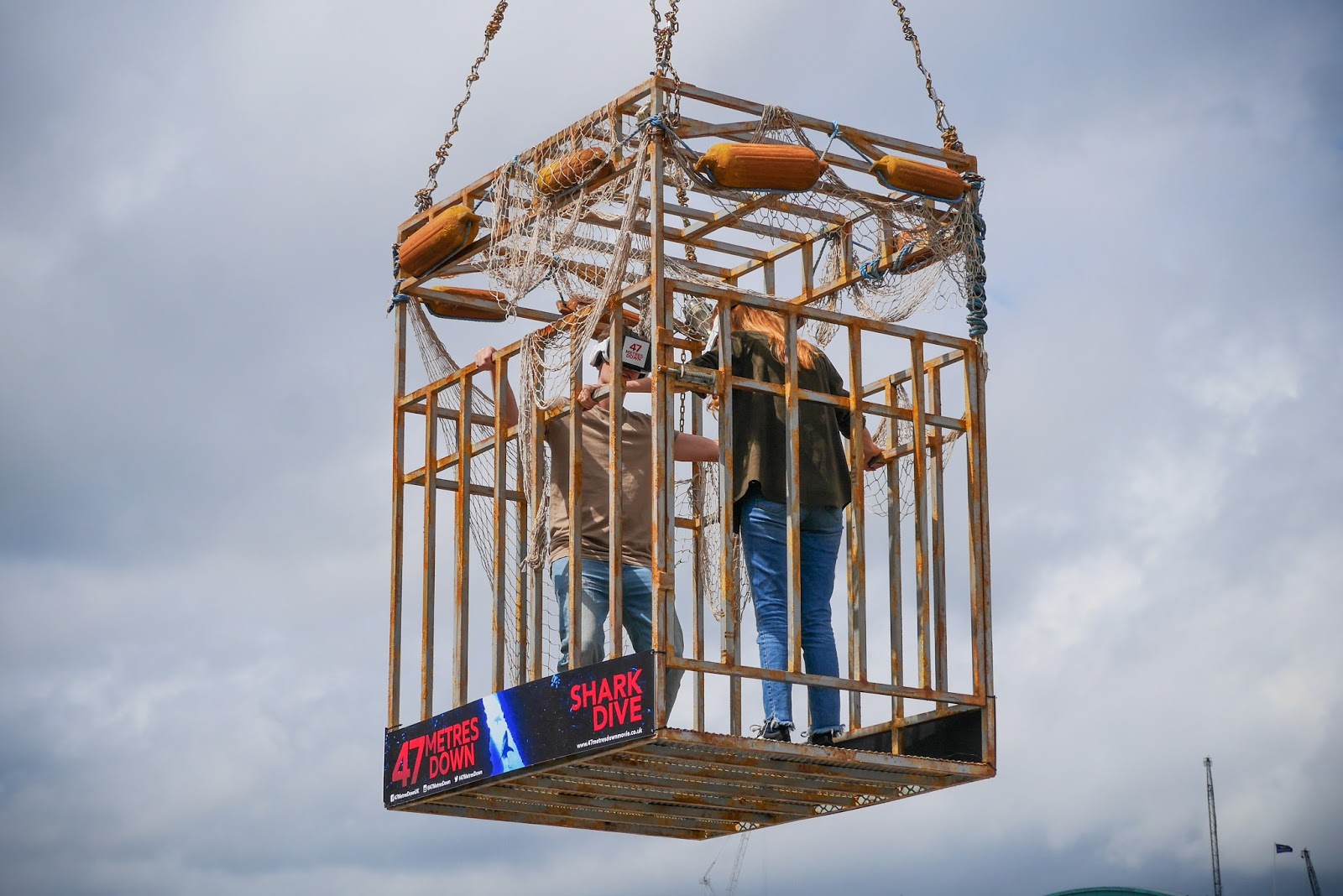 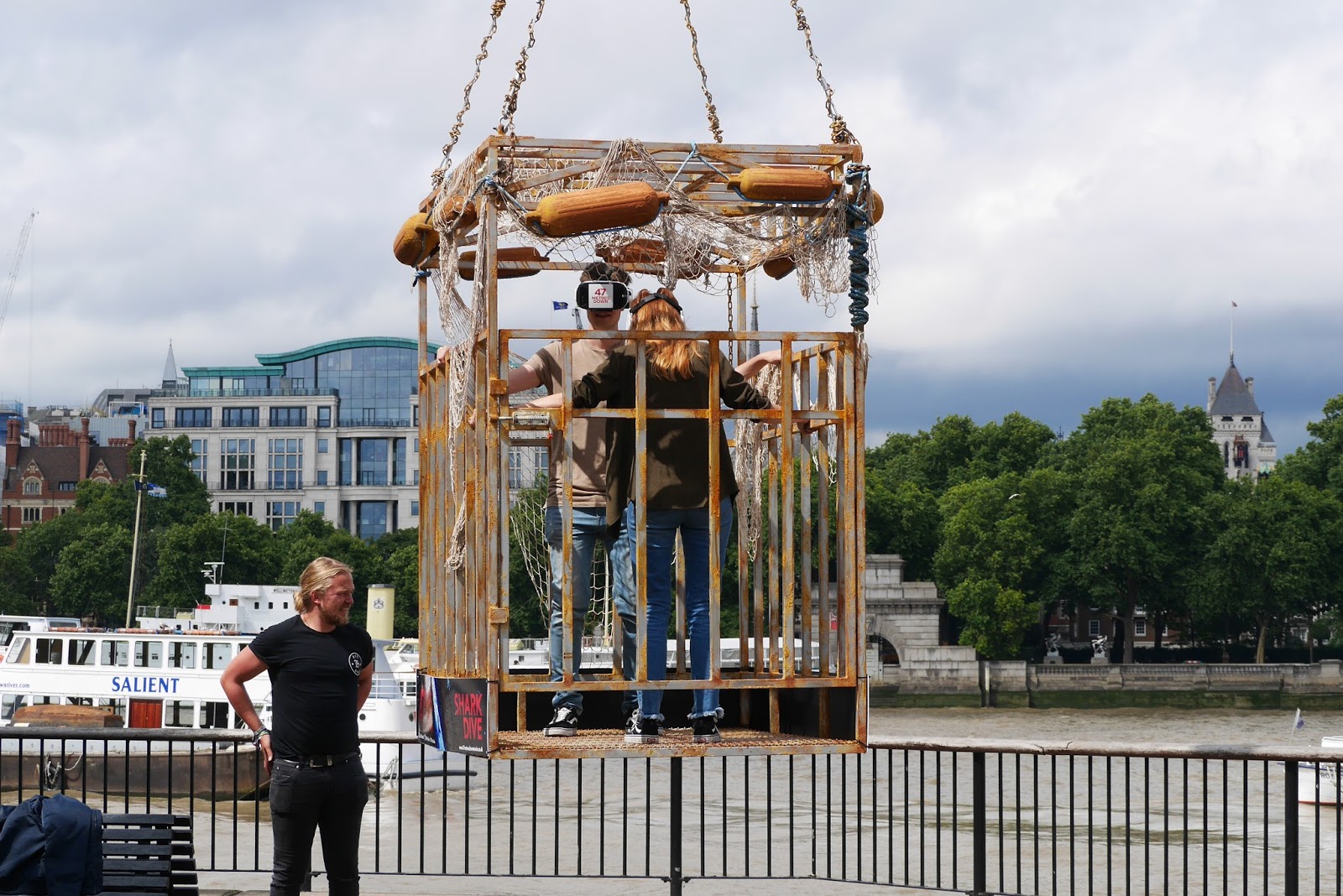 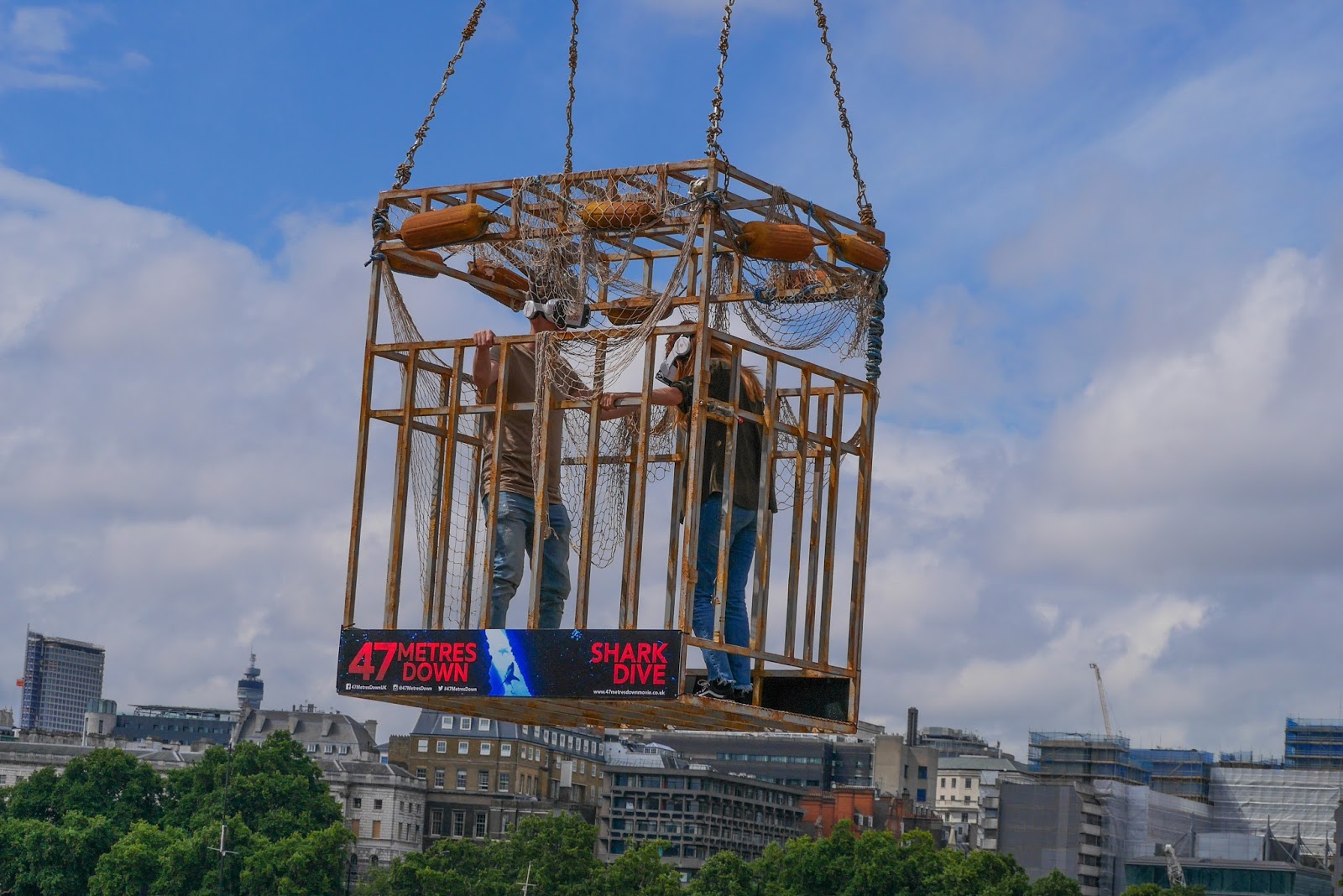 The copious and rather unpleasant amount of sweat created during the screening had only just dried, when my body decided to create a whole new batch during this experience. Isn’t funny how you can’t control your bodily functions in these instances, even though you know that shark below is only made of paper mache or something and everything you’re seeing ISN’T REAL?! What’s even weirder is that we enjoy it, in fact we revel in it. 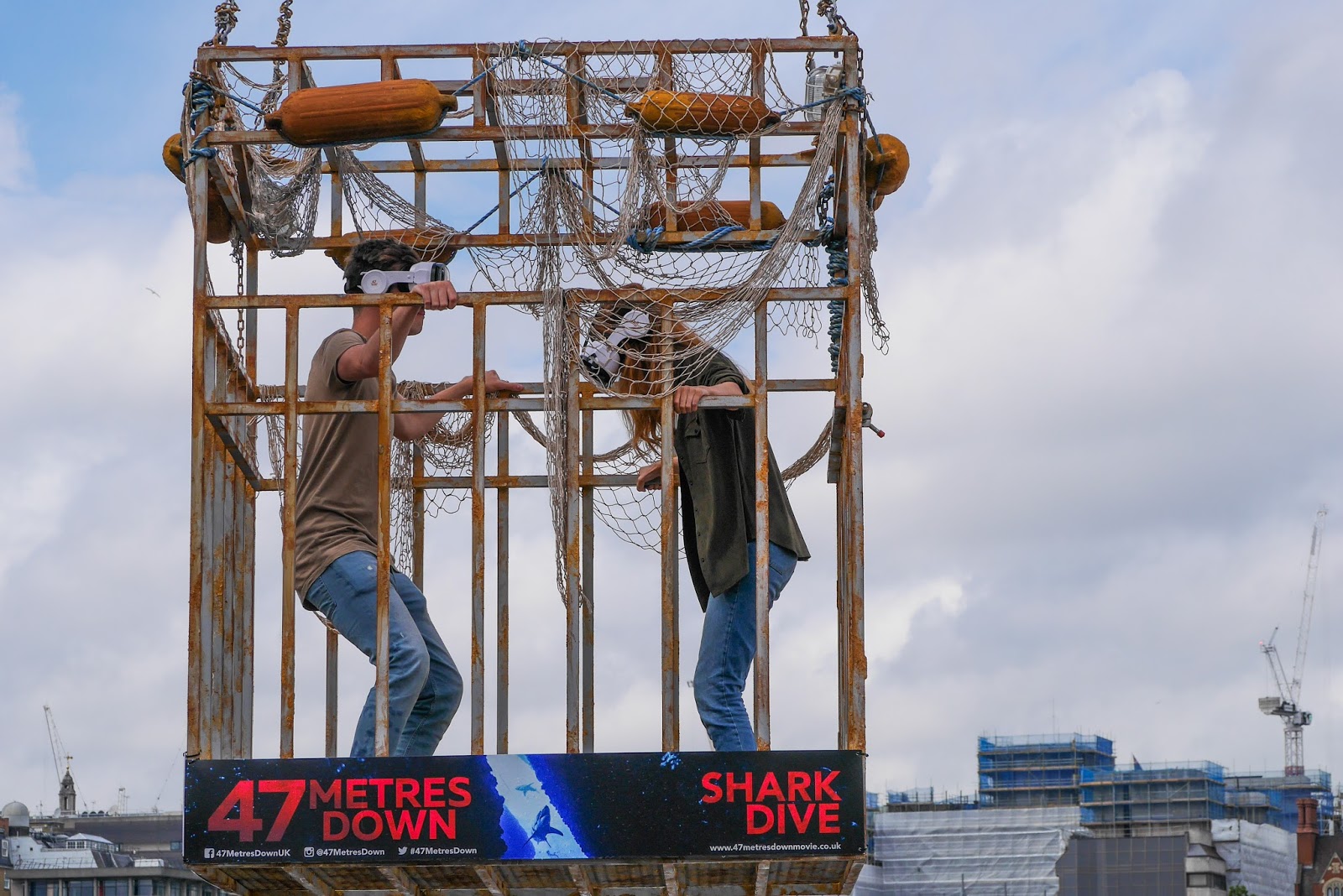 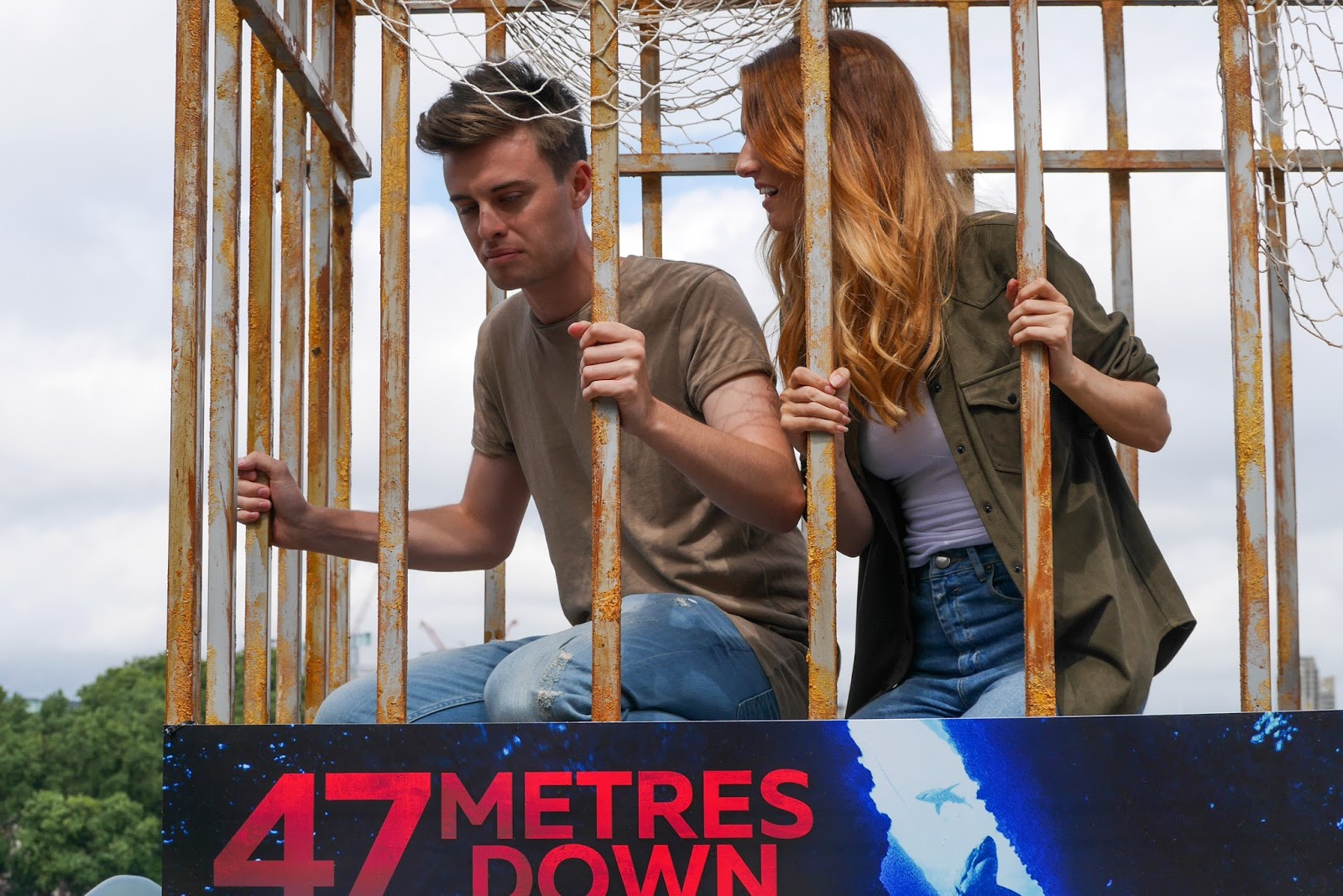 I have always loved simulaters. When I went to Universal Studios as a youngster, the Back To The Future ride blew my mind and I ended up coming out of the ride and straight back into the queue, so I’ve always been partial to entertainment of this nature. Having said that, the watery location of this one definitely tapped into my aforemtioned deepest darkest fears.

So, who’s going to check out this movie? Who else has a fear or water or sharks? Let me know in the comments. 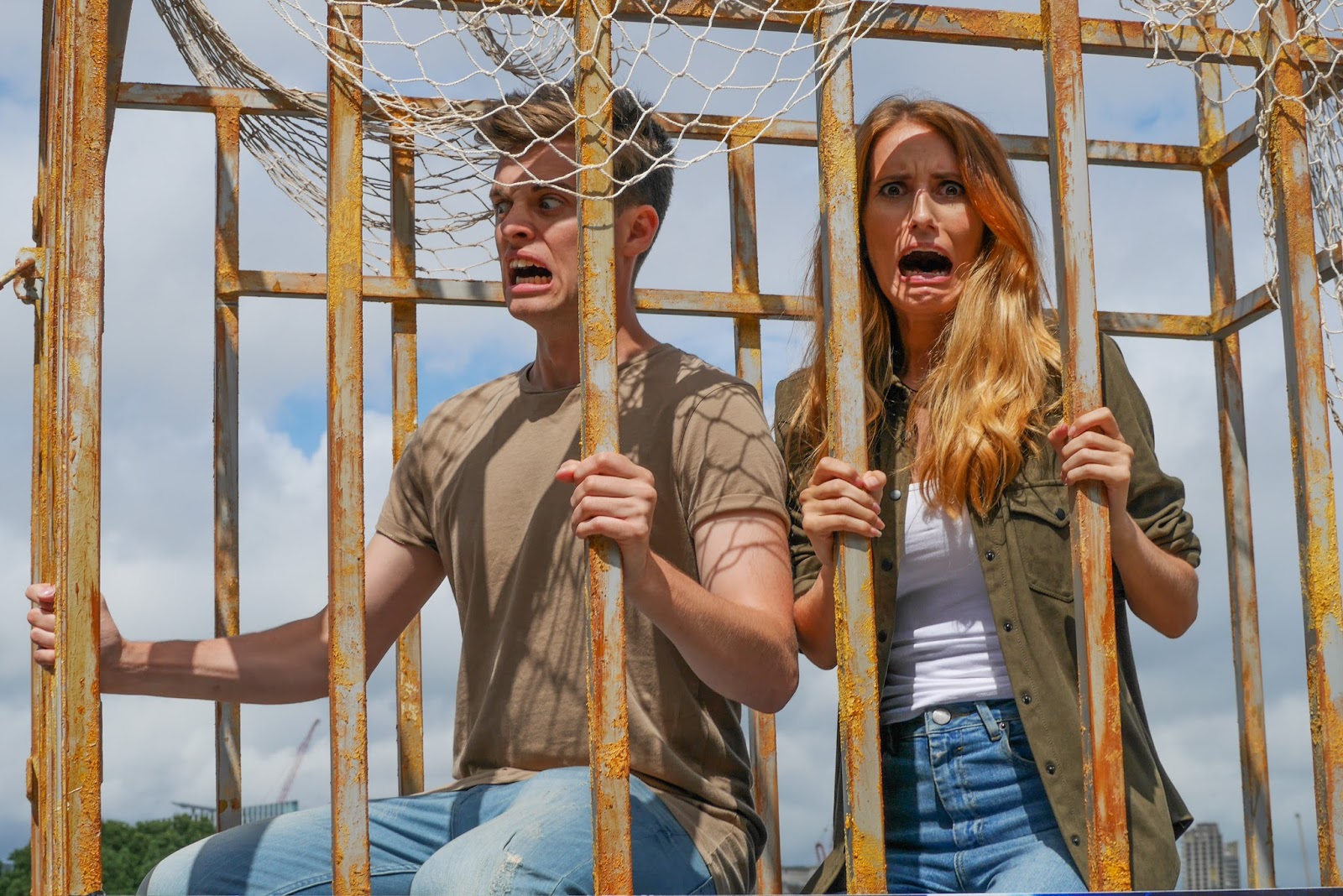