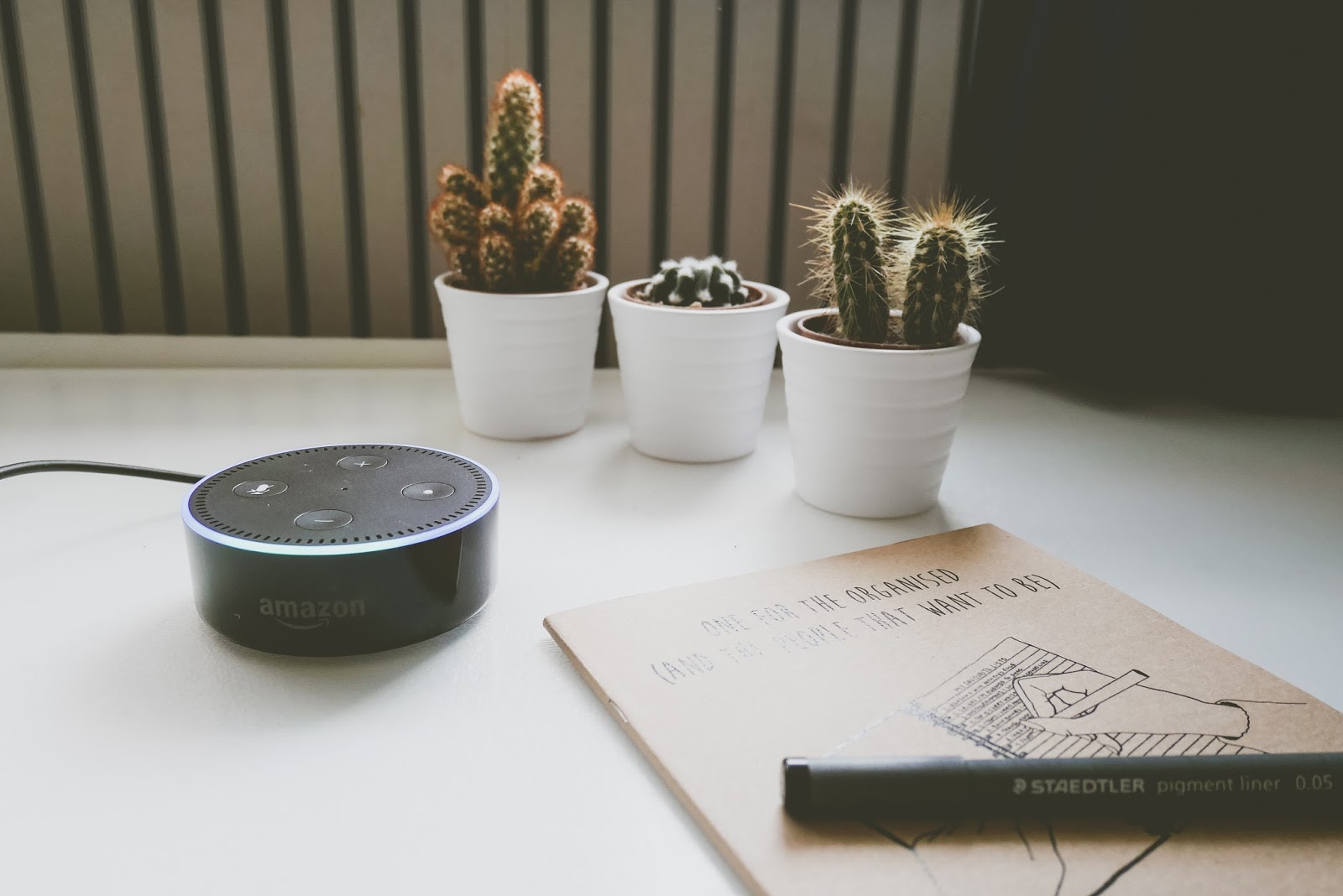 Recently I was spending the afternoon at my friend’s house. She was busy in the kitchen meaning I was left in the lounge with her son. Every non-broody adults nightmare. Inevitably my mothering instinct didn’t kick in and I could feel panic set in.I could tell he was already getting bored at my attempts of child friendly entertainment, and I knew that I’d soon run out of silly faces to pull, and basic games to play, that would prevent him from switching from angel child mode to creasy-faced Waaaaaaa mode. Then he pointed at a contraption on a cabinet to the right of the TV and started talking at it. Even with a 3 and a half year olds limited vocabulary he got this machine to play him his favourite song. Never have I felt more passed-it, and less down with the kids. Not only did I not know what thing technological item was, I didn’t know how to use it, nor what the hell the annoying song playing out of it was.

Once the initial depression of realising that I’m embarrassingly behind on what ‘modern life’ is had subsided, I realised I’d been delivered a gift. This little circular glowing object would not only share the responsibility of taking care of this little boys entertainment, it would actually completely relinquish any pressure to be fun ‘aunty’ Soph. After watching a human one tenth my age take control of this technology for a few minutes, I felt comfortable to utilise it’s power too. I could sit back on the sofa and instruct the machine to play a song, tell a joke, or give a fact. Look at me!  I was suddenly a DJ, a child party entertainer, even and an educator. Even better I could do so sitting down. How smug I felt. Even better I felt in control.

While his mum finished up in the kitchen I now didn’t have to worry about him putting his hand too close to the plug, picking up rogue items on the carpet and putting them near his nostrils, ears or mouth, or him staring at me with urgent anticipating as he waited for me deliver the next fun activity, he was completely occupied by Alexa. Not only occupied by her, but using her as a tool to teach me things. He kept asking for more historical facts, and would be full of glee whenever it delivered, looking to me to see if I was similarly impressed. I wasn’t necessarily interested in learning more about Percy Pigs or Trains but I was impressed with the interaction taking place.

That was my first meeting with Alexa and I never forgot about her.

So this week we welcomed Alexa in to our home. Dad was very disappointed to find out that his favourite feline eyed, ankle boot wearing presenter/fashionista wasn’t moving in, but was intrigued by this alternative Alexa which would be keeping him company in the lounge each day.

Unfortunately we don’t live in a particularly high-tech house. We do have speedy wi-fi, and I have numerous tech gadget that I use for my art and during my YouTube creative process, but the house exists pretty much in it’s factory settings. Lights are turned on by a switch that is located by the door of the room. There’s not even the luxury of a dimmer switch. The stereo is not hooked up to anything, and requires you to turn it on with your fingers….yes you heard it right, your finger on the button, on the stereo. I know, who are we??? So this means we are currently unable to make the most of all the wonderful capabilities of the Echo Dot, which as a hands-free voice controlled device can work with smart home devices so you can turn your lamps or crank up the heating without having to get up from your sofa.

If your house it up to date in this way though, you can connect Echo Dot to your speakers and turn your home entertainment system into a voice-controlled personal assistant which can play music from Amazon Music, Prime Music, Spotify and more. Imagine how good this would be for house parties??!! Sadly a house party while I’m living here with my parents is still something only found in my imagination…..but one day!!

I can however move my Echo Dot to my bedroom and use it as a clock to make sure I get up and work, which is very important as a Spoonie and a freelancer who needs all the reminders possible to get out of bed on these dark inclement mornings. 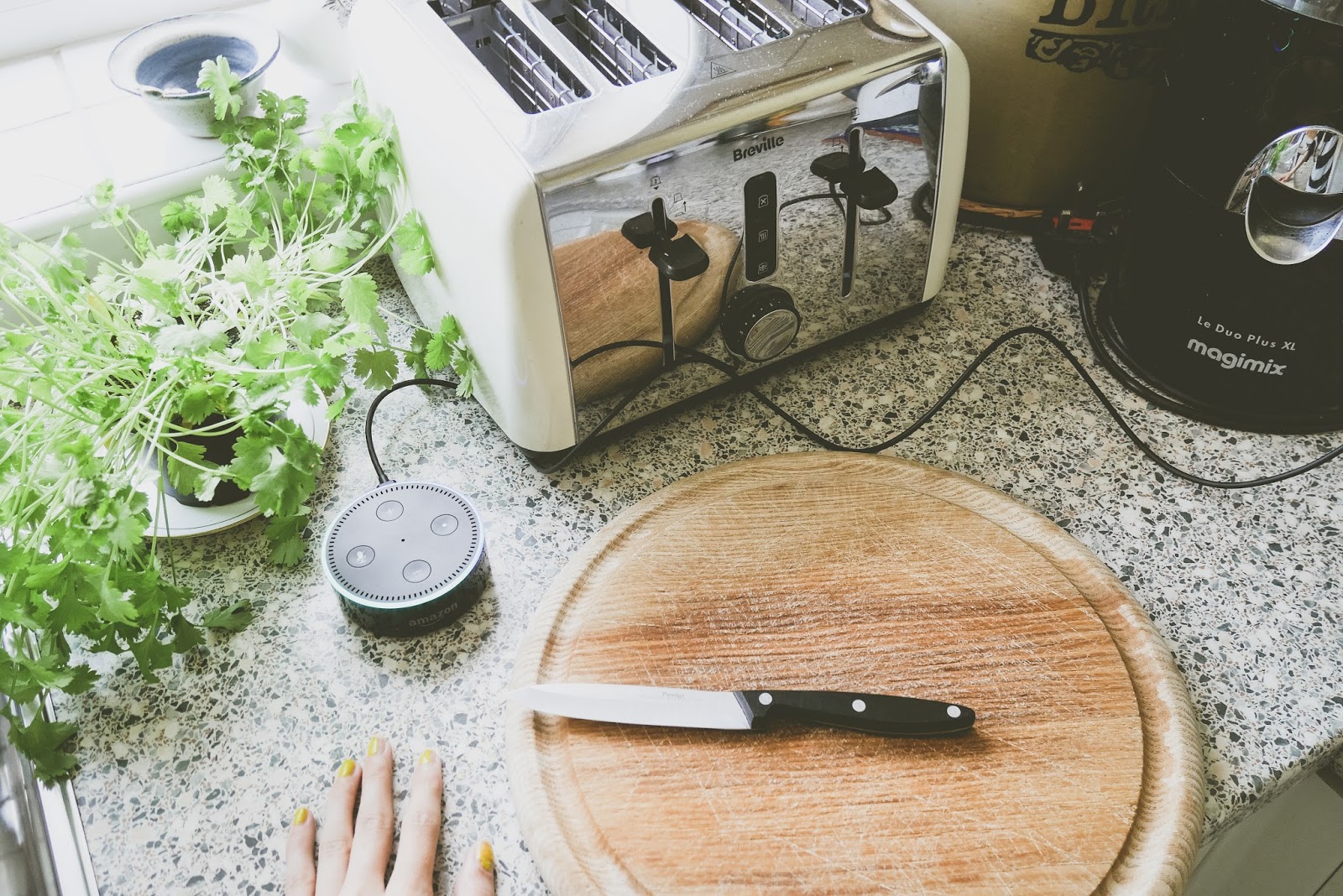 As you guys know Si is the chef in this household, cooking for me most mealtimes and on occasions for the whole household. He often has lots of things on the go at once bubbling away and spilling over on the hobs, roasting in the oven, marinating on a cutting board. During this whirlwind process I tend to stay away, as he definitely gets a bit of the Ramsey about him, and my presence only seems to aggravate further. Despite the gruffness by being there cultivates, he usually complains that he feels a bit lonely when he’s shut away in the kitchen, but since Alexa’s been joining him he’s been less insistent on me popping by sporadically to check on his progress. When I have popped in, merely to avoid the accusations that he’s more like my live in chef than a boyfriend, I have found his dancing in his apron to the music he’s requested of DJ Alexa. The novelty factor of the Echo Dot is still at a high, meaning he also gets a right kick out of using it to set timers and ask for measurement conversions. 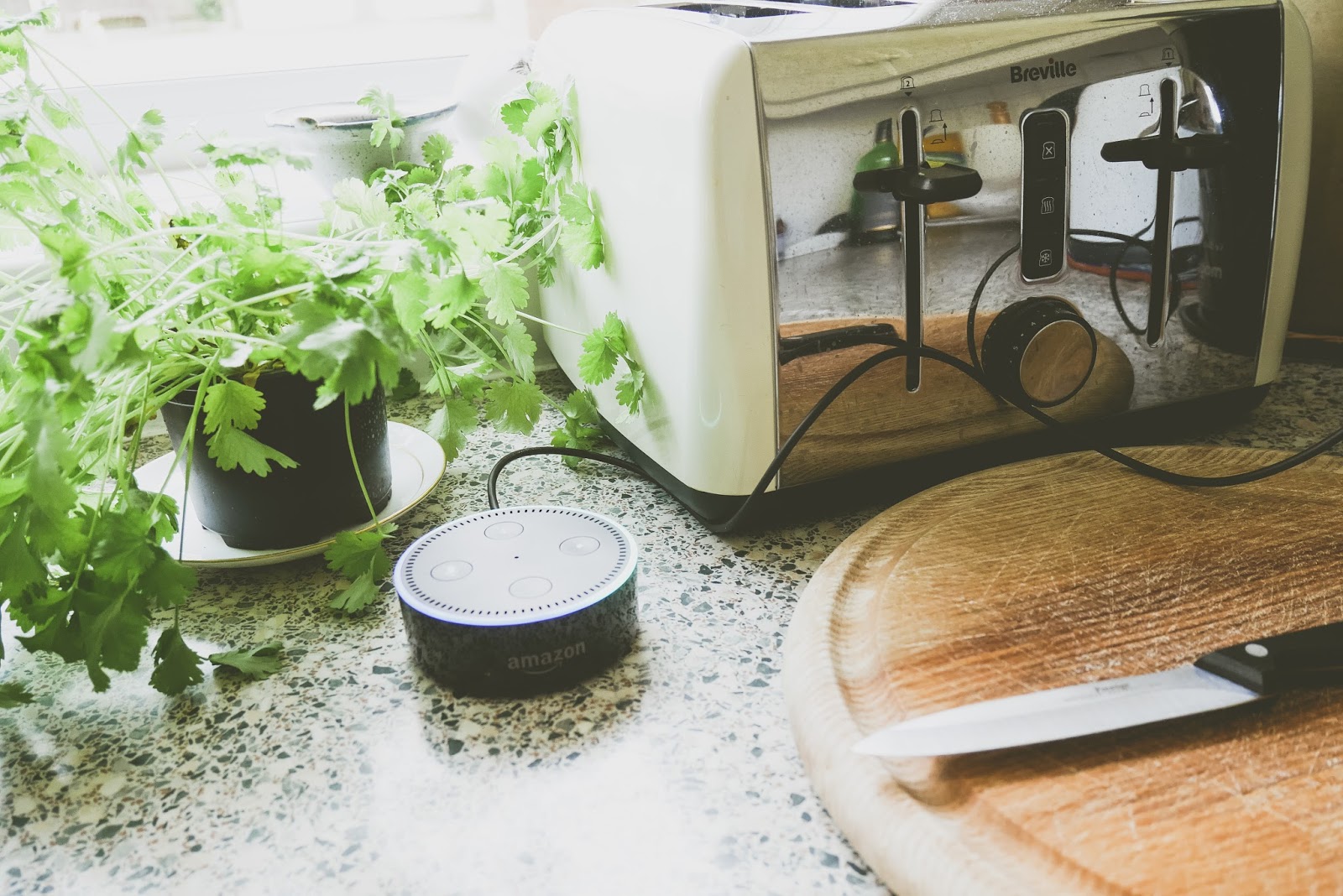 Although I’m not necessarily pro every tech item that encourages a significant level of laziness, these tools are lovely ways of ensuring your chill nights are as relaxed and motion free as you’d like. For someone like me (a spoonie) who is always looking for ways to conserve energy I’m looking forward to find as many ways as possible toe reduce the amount of times I have to get up, connect my eyes to a screen to use my phone/laptop to seek out information or to make orders etc. Over the last couple of years Amazon Prime has saved my butt on many occasions, whether that be getting in some last minute props for a shoot, or getting a present for another birthday I’ve managed to forget about, so the fact that us members can also use the Echo Dot to order is reason enough to get it – you simply say “order INSERT PRODUCT” or “buy INSERT PRODUCT” and Alexa will find it and add it to your basket. You then confirm the order by saying “yes” and you can even check the status by asking “Alexa, where’s my stuff?” It’s like having a personal assistant, but one that you don’t have to feel guilty about being blunt with.

What if you have a busy household, a barking hangry dog, a teenager who blares music all the live long day, or a Dad who loves the sound of their own voice particularly when they’re ranting about Brexit or a mum who seems to have a worrying obsession with hoovering? Don’t worry Alexa will still be able to seek out your command or question. Tucked under the light ring is an array of seven microphones that use beam-forming technology and enhanced noise cancellation. With far-field voice recognition, Amazon Echo Dot can hear you ask a question from any direction. When you want to use Echo Dot, you simply say the wake word, “Alexa”, and Echo Dot lights up and streams audio to the cloud, where the Alexa Voice Service is leveraged to recognise and respond to your request. 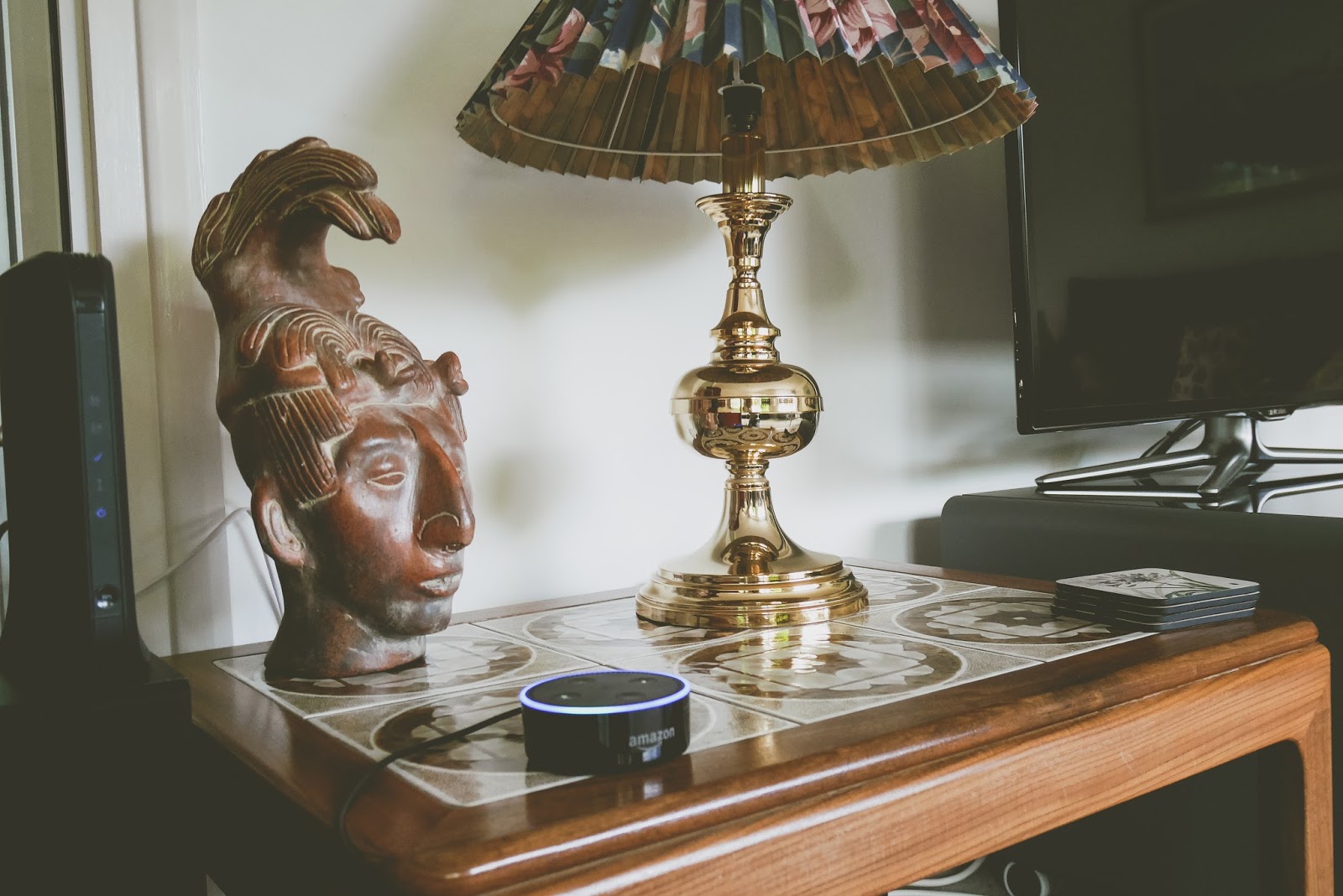 What else can she do? Those in the right areas can order a car with Uber too, by the way what’s the latest on Uber after all of that recent hoohaa, I’ve lost track? My most utilised functions will probably be the ability to get a takeaway with Just Eat, as aNetflix and food delivered to my door is my current idea of a social life, and I give myself that feel good feeling by giving the guys a nice tip when they turn up at the house. A less exciting but very necessary and regular type of usage will be checking the train times with National Rail Enquiries. Anything that means I can avoid having to call an actual human is always preferable.

I have to be honest that at first my mum wasn’t pleased about Alexa’s arrival, maybe she was worried about the female hierarchy of our household. I jest of course, that wasn’t it, we all know she’s the boss, my mums actually just a bit phobic of technology. Although she’s just about managing on her very basic (non internet) phone, she still gets Dad to send all of her emails and does all of her online banking, and she still gets me to record her TV shows. Don’t even mention Drones to her. She’s also on a mission regarding clutter, she hates me bringing anything new in to the house that she doesn’t deem necessary, particularly something that could effect the attractiveness of the lounge.

But the great thing about the ECHO DOT is that it’s as prominent and useful as you choose it to be. It’s compact and tasteful design means that it’s not an pointless eyesore even if it’s only used on the odd occasion, and at £49.99 is a very affordable guilt free tech purchase. I’ve actually noticed my Mum start to enjoy asking it for a daily joke, I think there’s comfort in the familiarity of it’s cheesy humour, it’s clearly what she’s in to if my Dad’s anything to go by. She’s gaining confidence with it too, relying on it for regular weather updates, necessary during these weird times of Ophelia and Bryan. Of course the machine doesn’t always get it right, and can’t answer everything you ask it, Si was a bit miffed they it knew who his band were, but not him,  but we actually enjoy trying to catch it out  the giggles that come when it’s a bit off in it’s response. 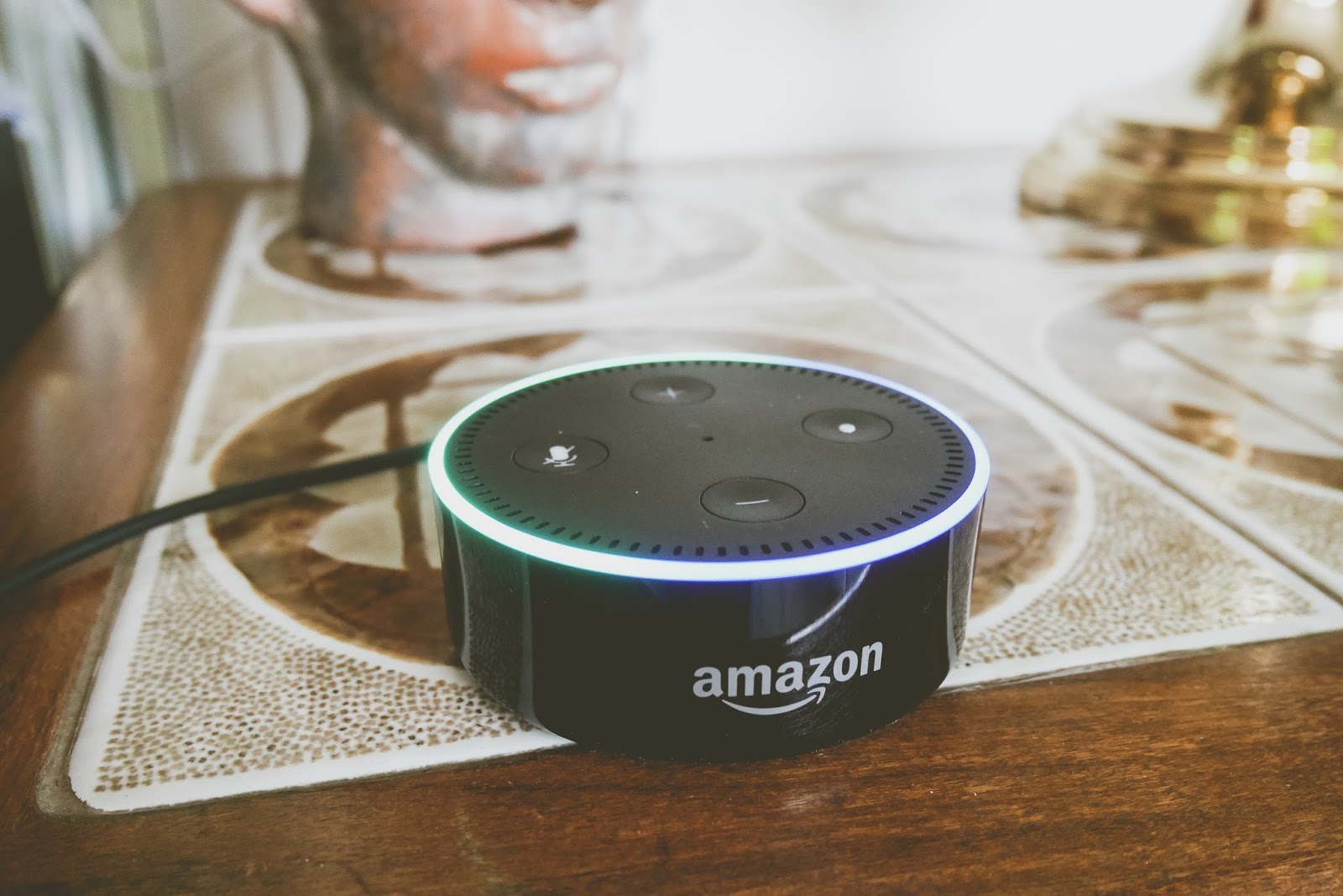 Alexa only moved in a week ago but she’s already become a valued member of the family, in fact I think some members of the household may prefer her over me. Fair enough really, she’s definitely more organised and put together, plus she only talks when she’s spoken to.

I’m intrigued to see how our relationship will grow and evolve when I finally move into my own place though, a home which will hopefully have all the tech mod-cons and a banging stereo system. With third party developers constantly creating new skills for Alexa, who knows what I’ll be using it for then, but also even next week, and the week after. It’s not often a relationship gets more exciting is it??