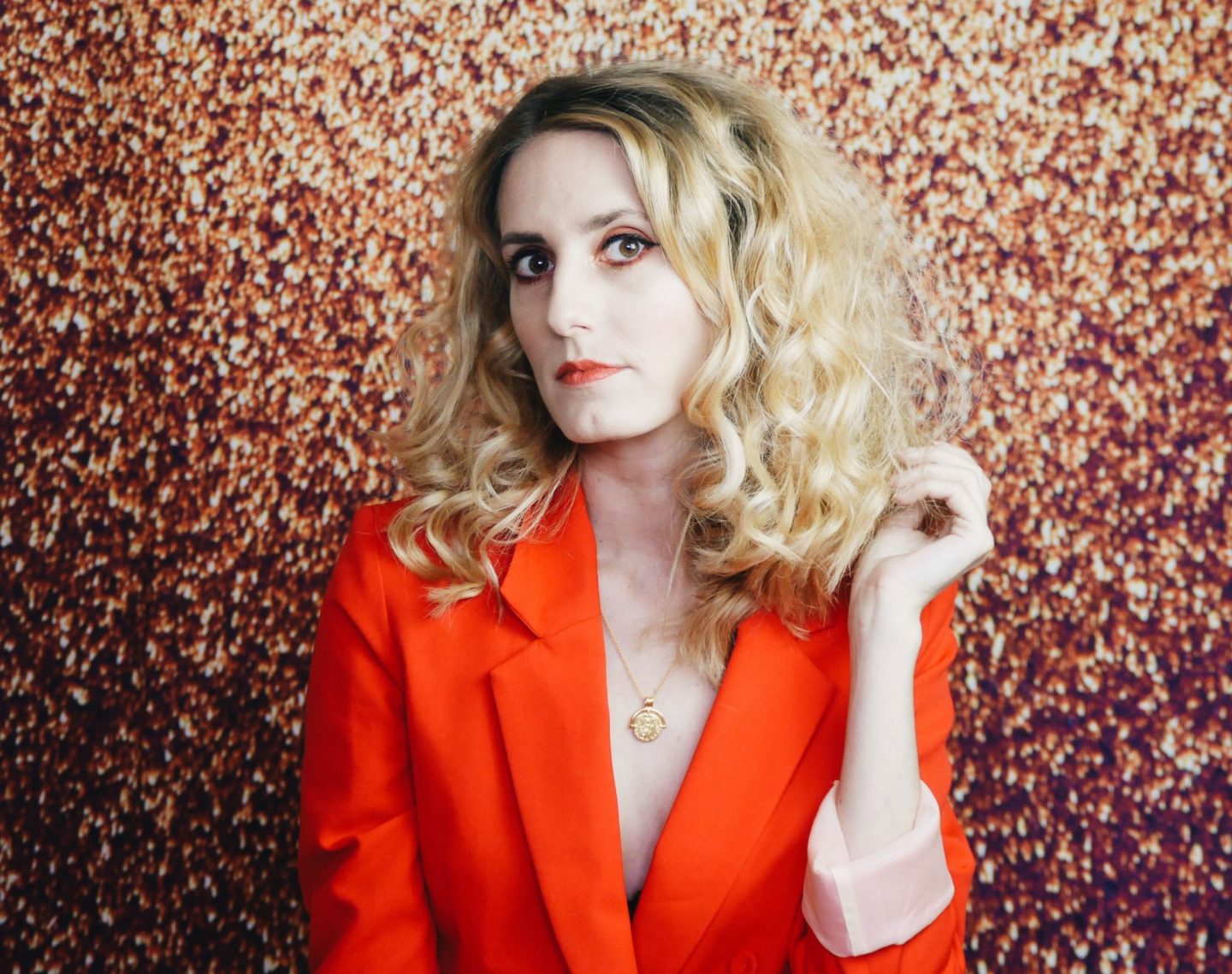 Happy New Year’s eve everyone! I really can’t get my head round the fact we are at this point of year again, it doesn’t seem too long ago I was thinking that 2017 was finally going to be my year (how wrong was I?), and feeling excited about opening my Etsy store and seeing if I could make photography into a bit more of  a career thing. I did give everything a go that I wanted to last year, but there were just too many unexpected distractions and personal upsets to reach a point of satisfaction or accomplishment with any of them. Hopefully a more peaceful 2018 will allow me to get me teeth fully stuck in, and progress a bit more swiftly with things.

Anyway, this isn’t a deep post, I wanted to be a more surface based for once. Let’s talk aesthetics for the night this that sees you into a new year, one full of possibilities. 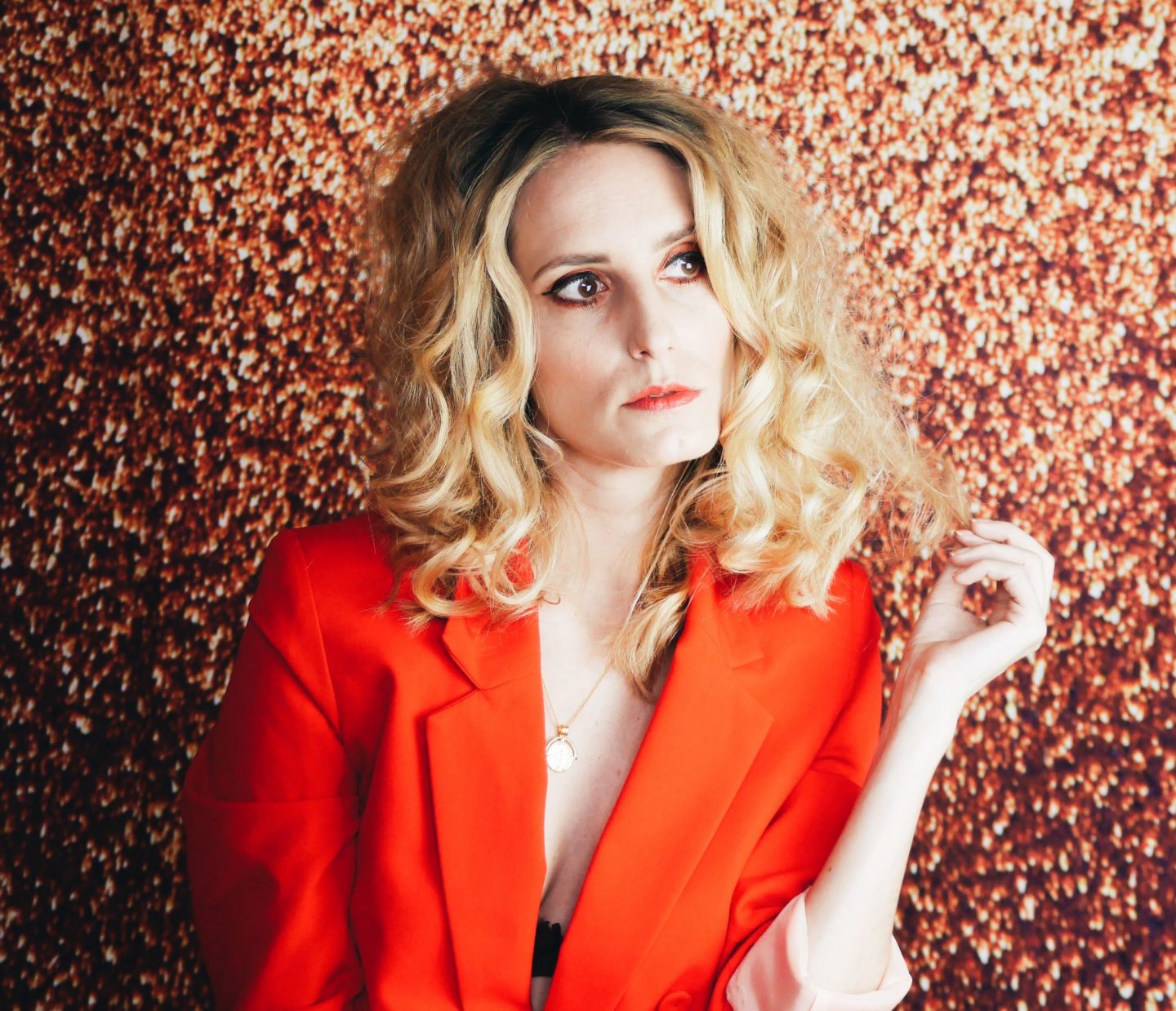 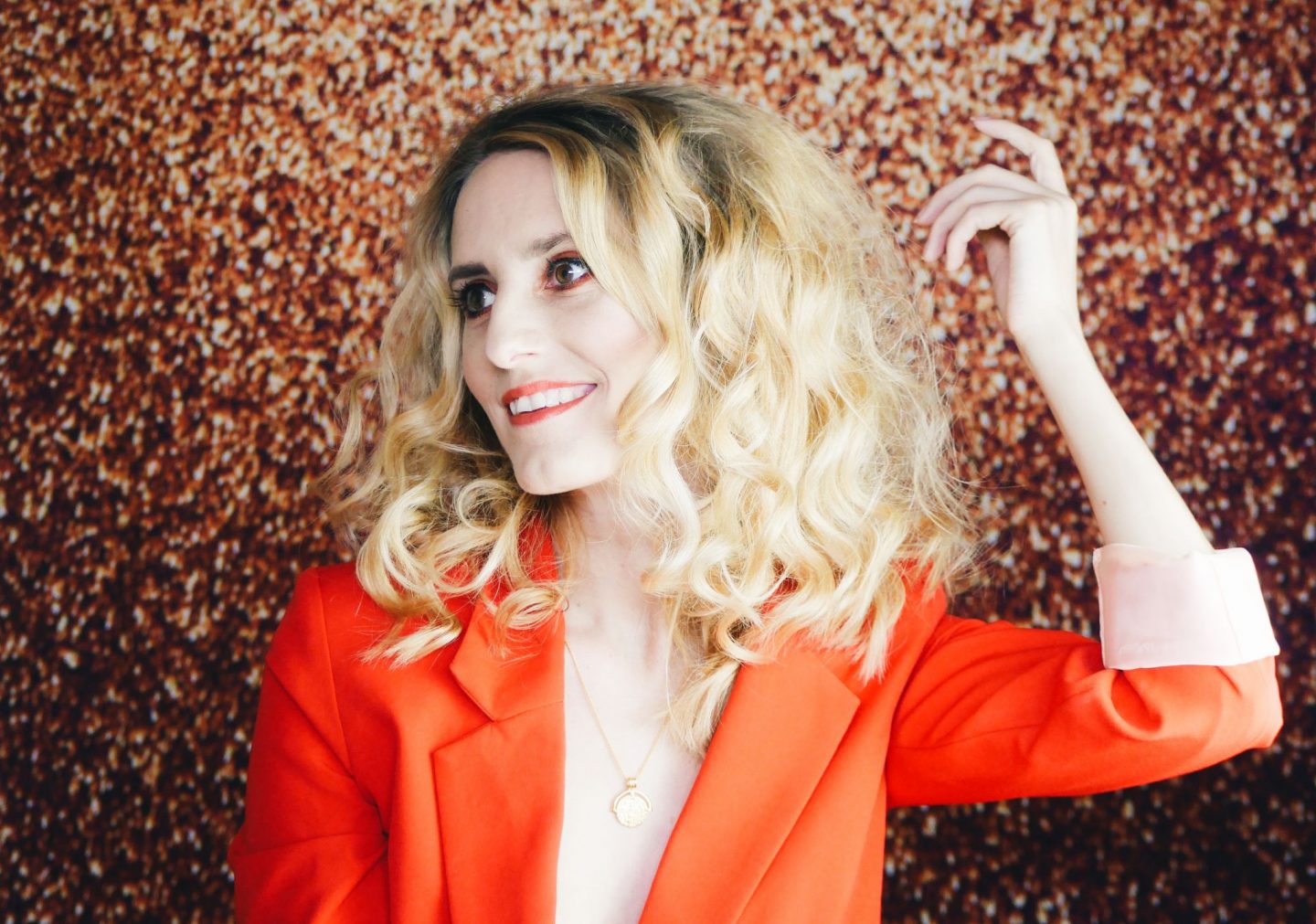 I had a few options for tonight, a couple of lovely house parties with snacks, games, and good company, and a mature dinner party ( well I say mature, the concept of a civilised meal is, but not sure it would end up being so considering the group gathering together and what we usually end up talking about). However, the last few days my fatigue has been worse than it has in a long while, so I’ve been sandwiching in a lot of naps in between festive family type duties. I’ve also been feeling a lot of pain in my arms. After a late night chat on Whatsapp last night my arms were incredibly sore, so I think my body is telling me to take it easy this New Years. I don’t want to start a fresh new year in a state where I am unable to get cracking on the exciting things I want to. 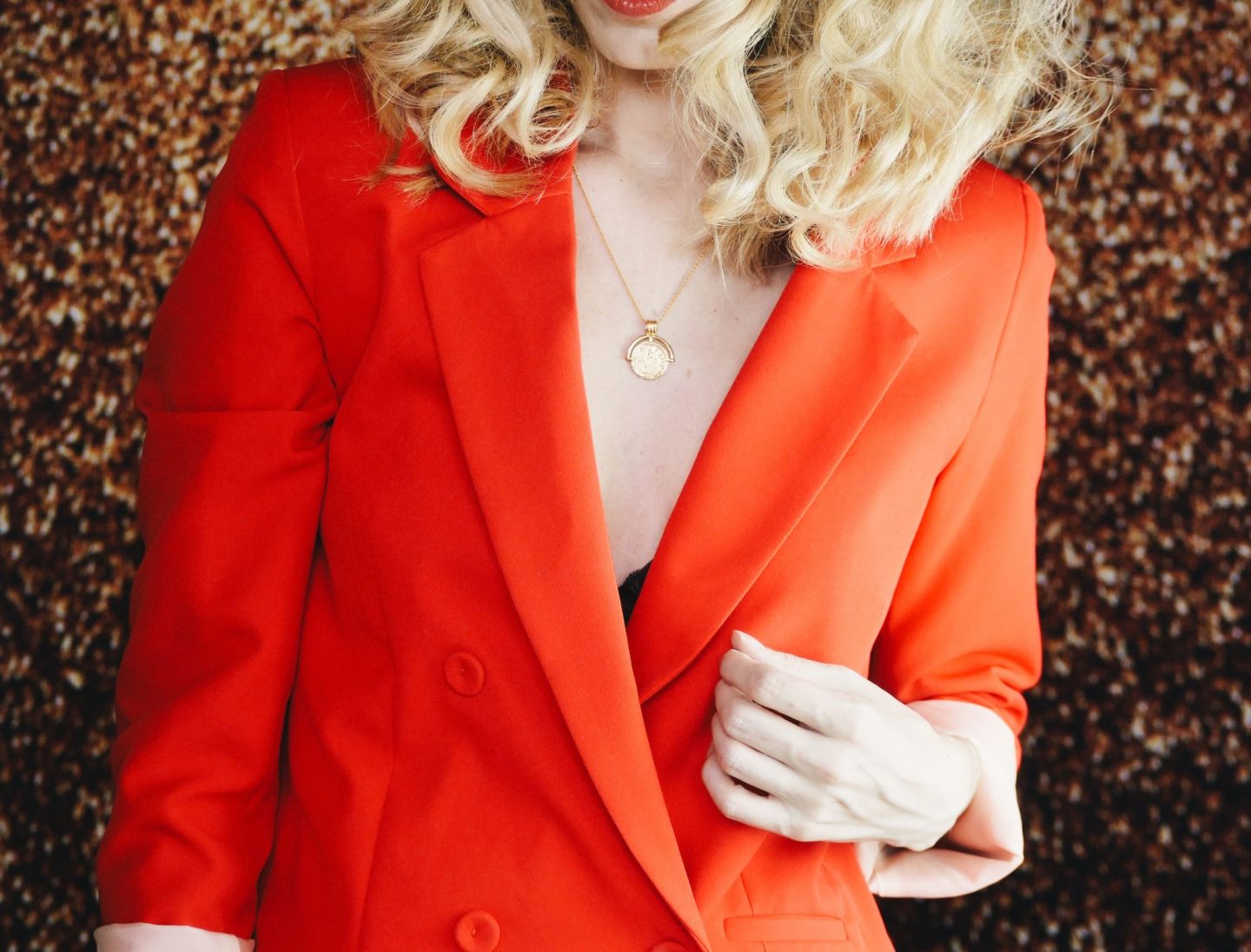 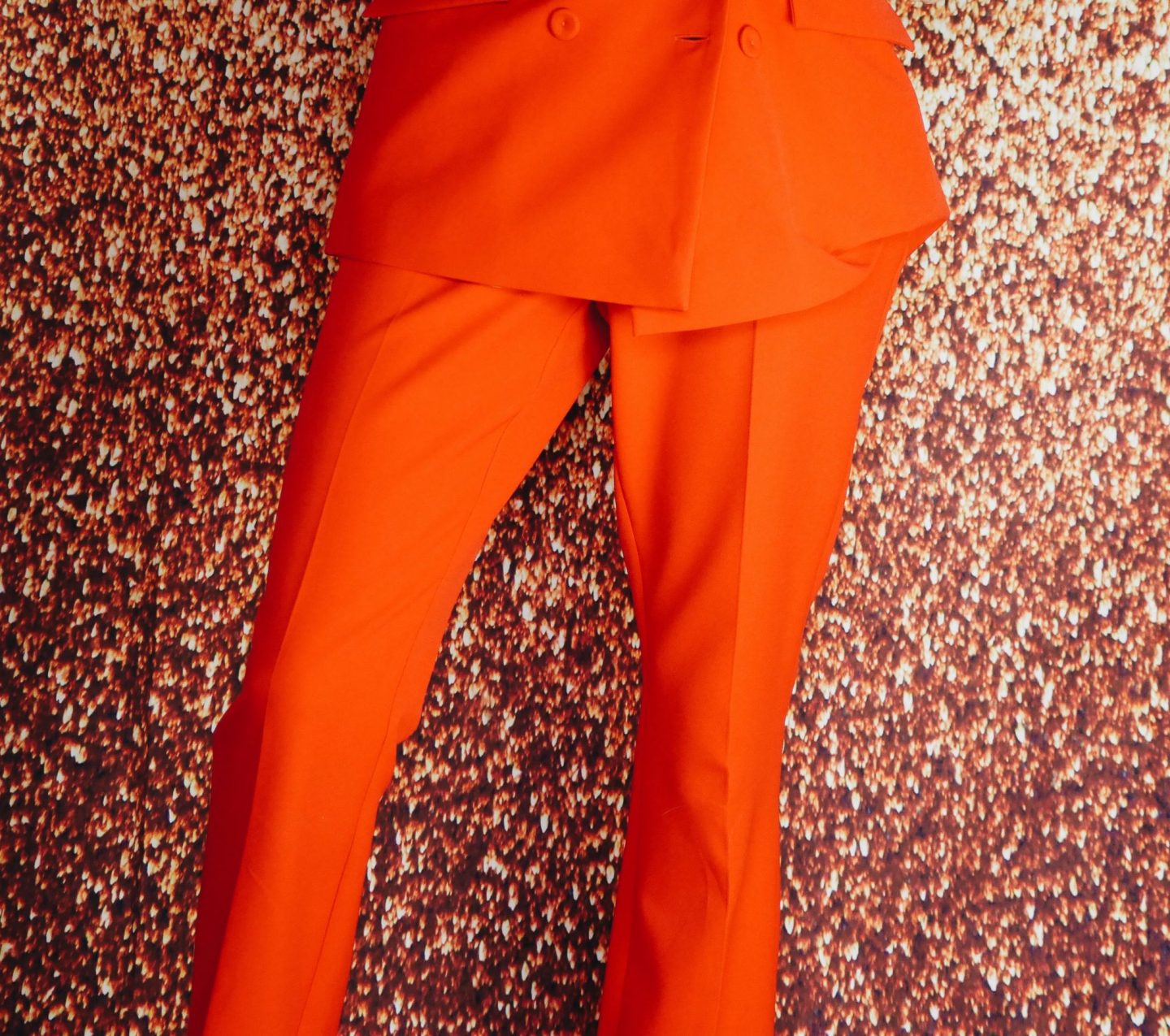 So Si and I have decided to stay in and eat lots of homemade vegan creations, which Si is currently slaving away over downstairs in the kitchen while being kept company by his mates in Liverpool FC (via his laptop, Klopp is not in my kitchen, thank goodness). But just because I’m now going to be in comfy lounge gear, that doesn’t mean I can’t share what I would have worn for the celebratory shindigs. 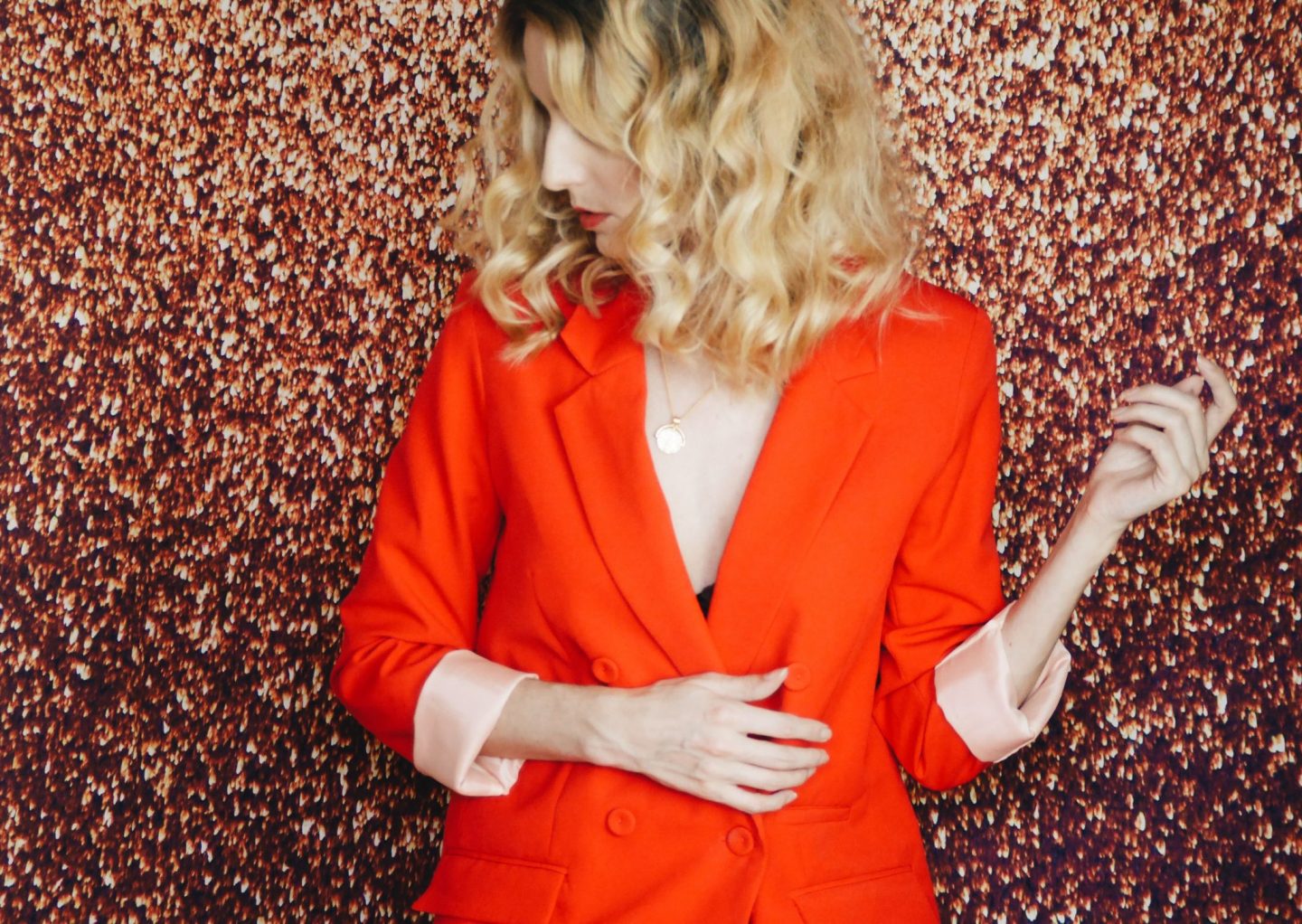 I had planned to do a New Year’s look-book video, but unfortunately half of this suit arrived this morning, and the other outfit, which you’ll see in the next post, arrived while I was out celebrating Si’s mums 59th birthday yesterday. I think all the Christmas orders and Boxing Day sale splurges must have slightly delayed all packages. 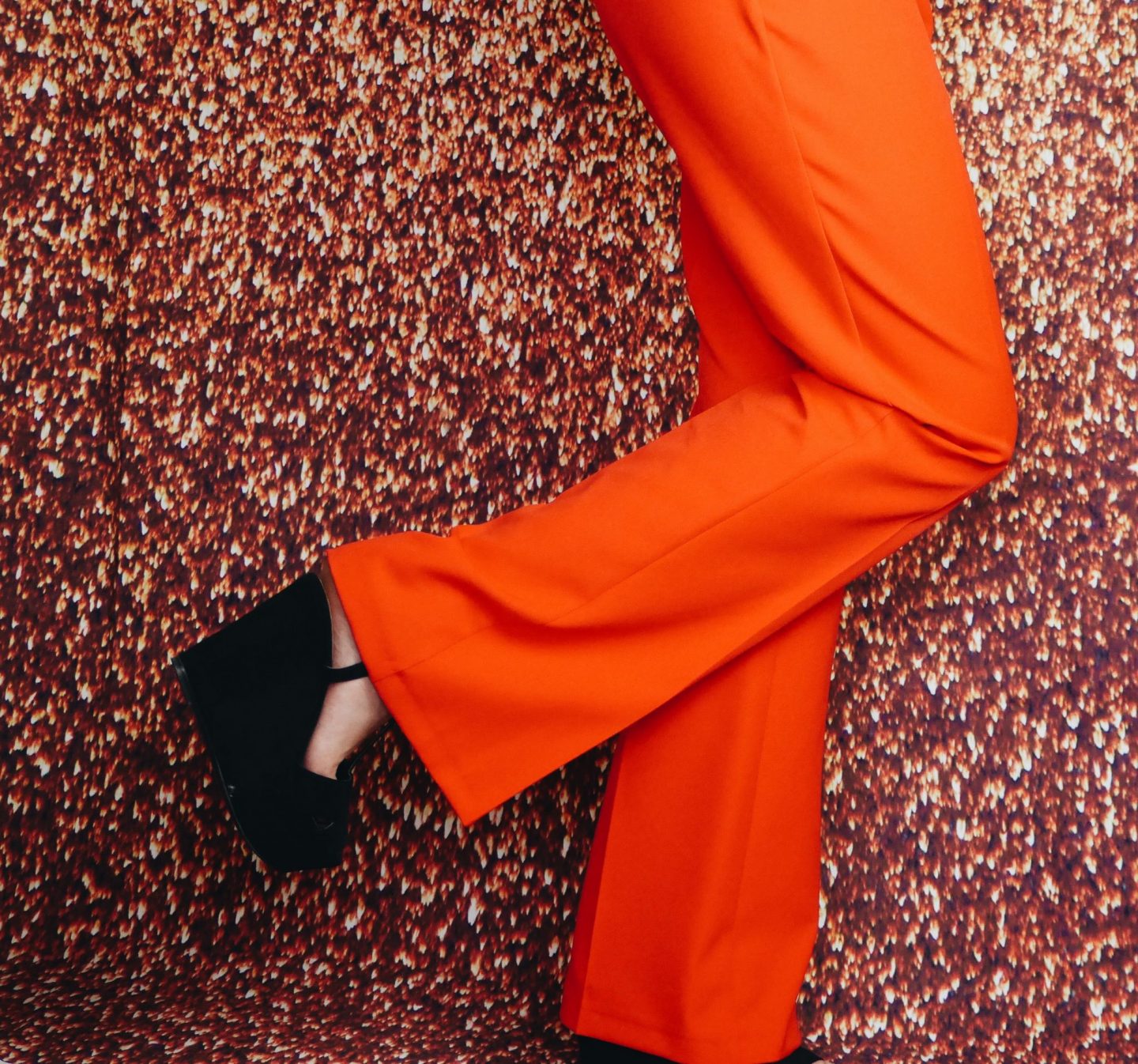 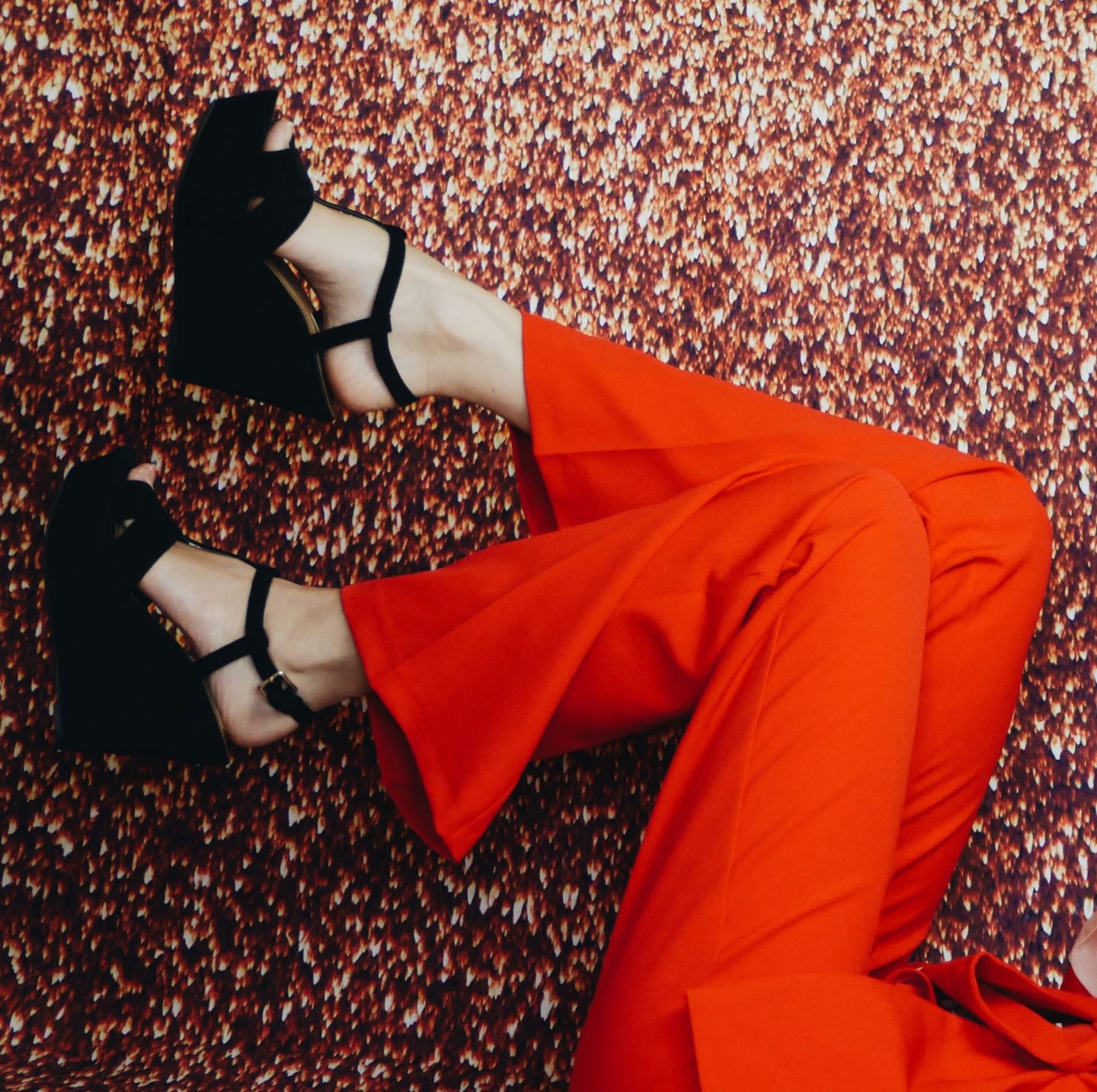 As you guys know I’ve become rather obsessed with suiting and have wanted a bright red one for a while now. I’ve always loved the combination of blonde hair and red together. I’ve struggled to find one in a cut I’ve loved till I spotted this OASIS number on ASOS. Unfortunately my discovery came when I was low on funds, so I held out a bit before purchasing, which was of course foolish. While I was still able to nab the blazer discounted in the ASOS sale, the trousers were sold-out in my size. Thankfully I was able to find my size on the OASIS website instead (reduced heavily too) which is why the blazer and trousers arrived at separate times. 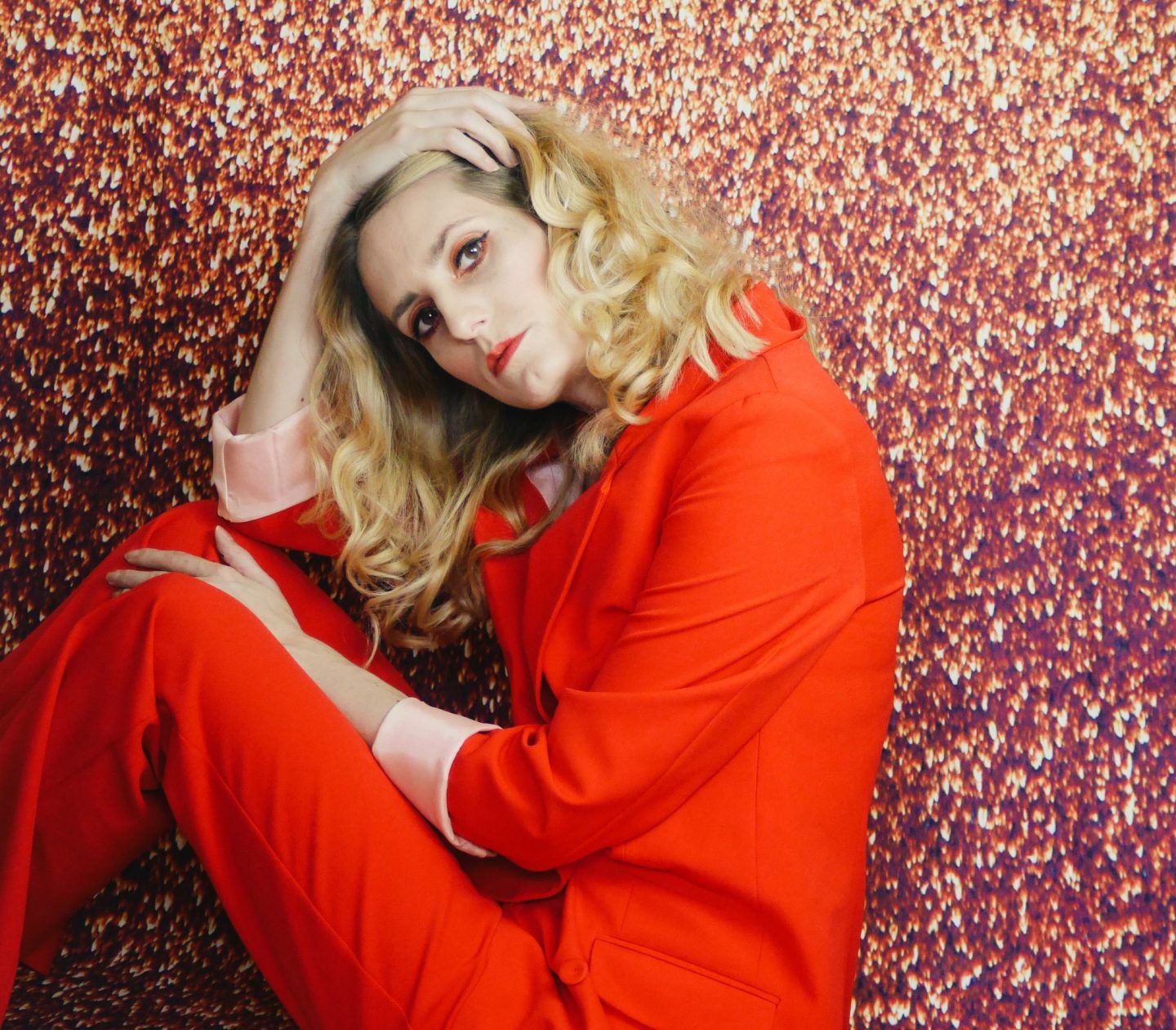 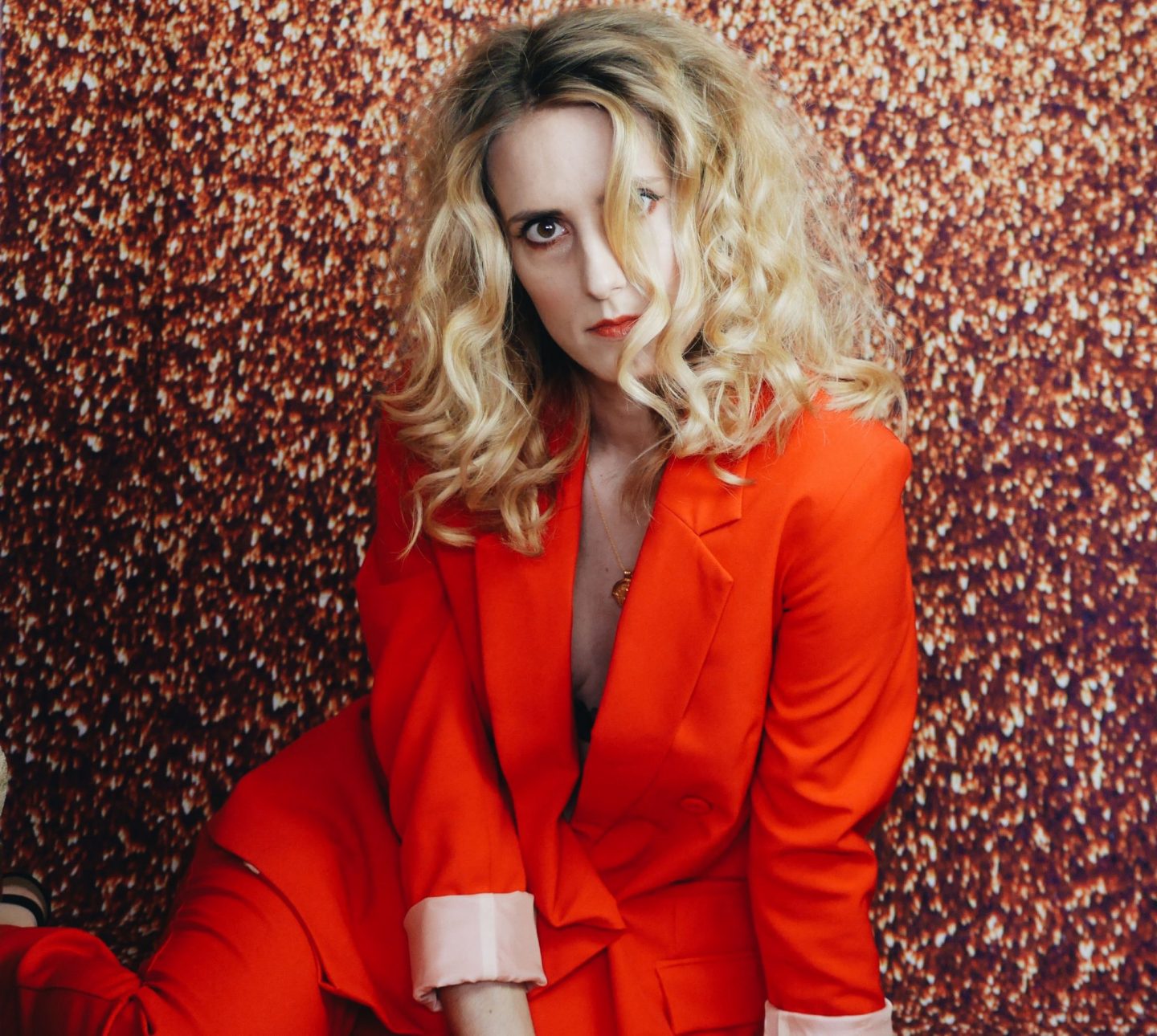 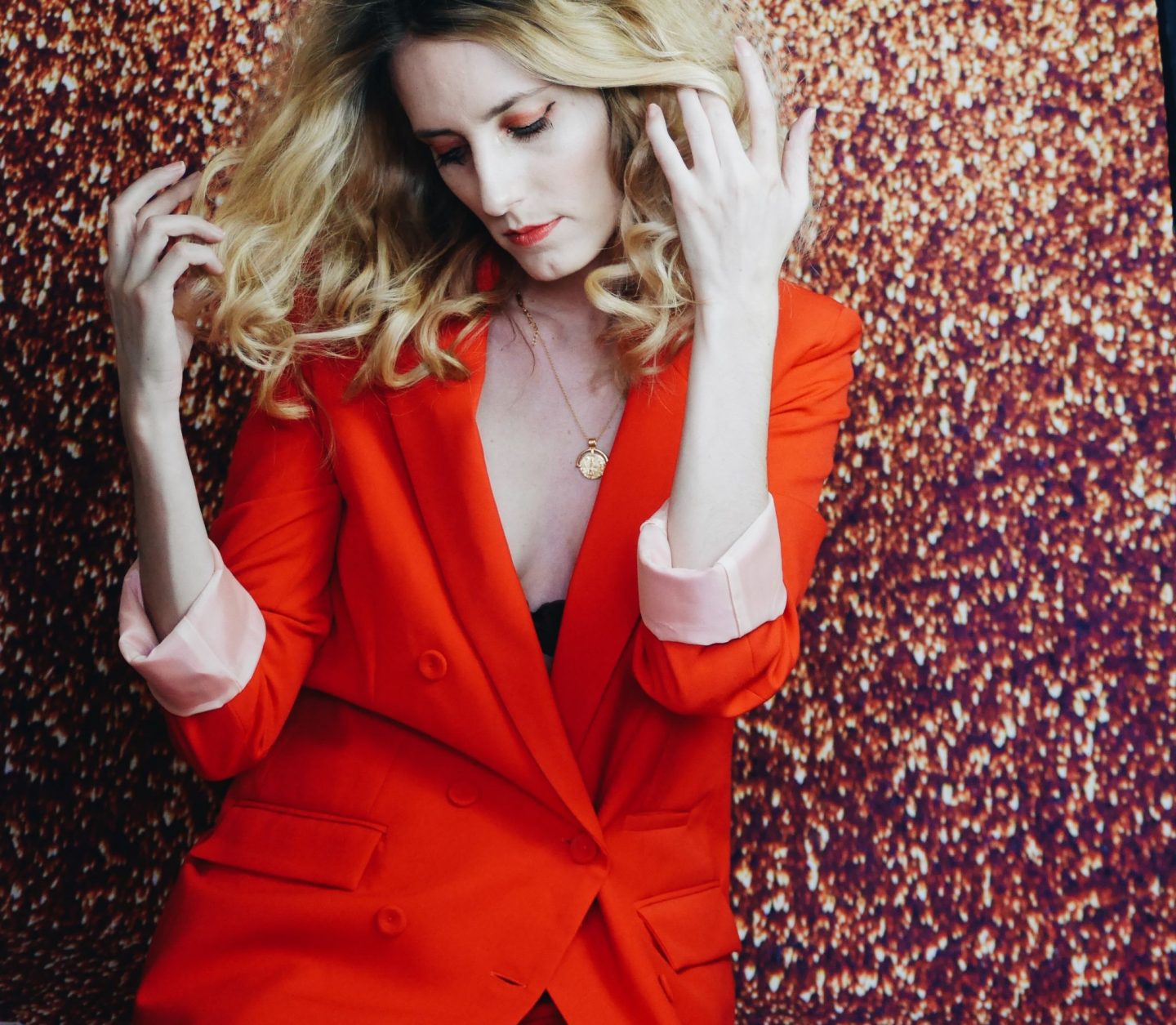 What stood out about this particular two piece was the flared trouser shape. Till now I’ve only bought straight leg or slightly tapered, and while I find them flattering, it’s always good to mix it up. This one has a studio 54 vibe to it, and for new years I felt the disco friendly silhouette would be more fun! It inspired me to do the big curly disco diva hair too. The orangey red also pops wonderfully in pictures, and is such a statement. 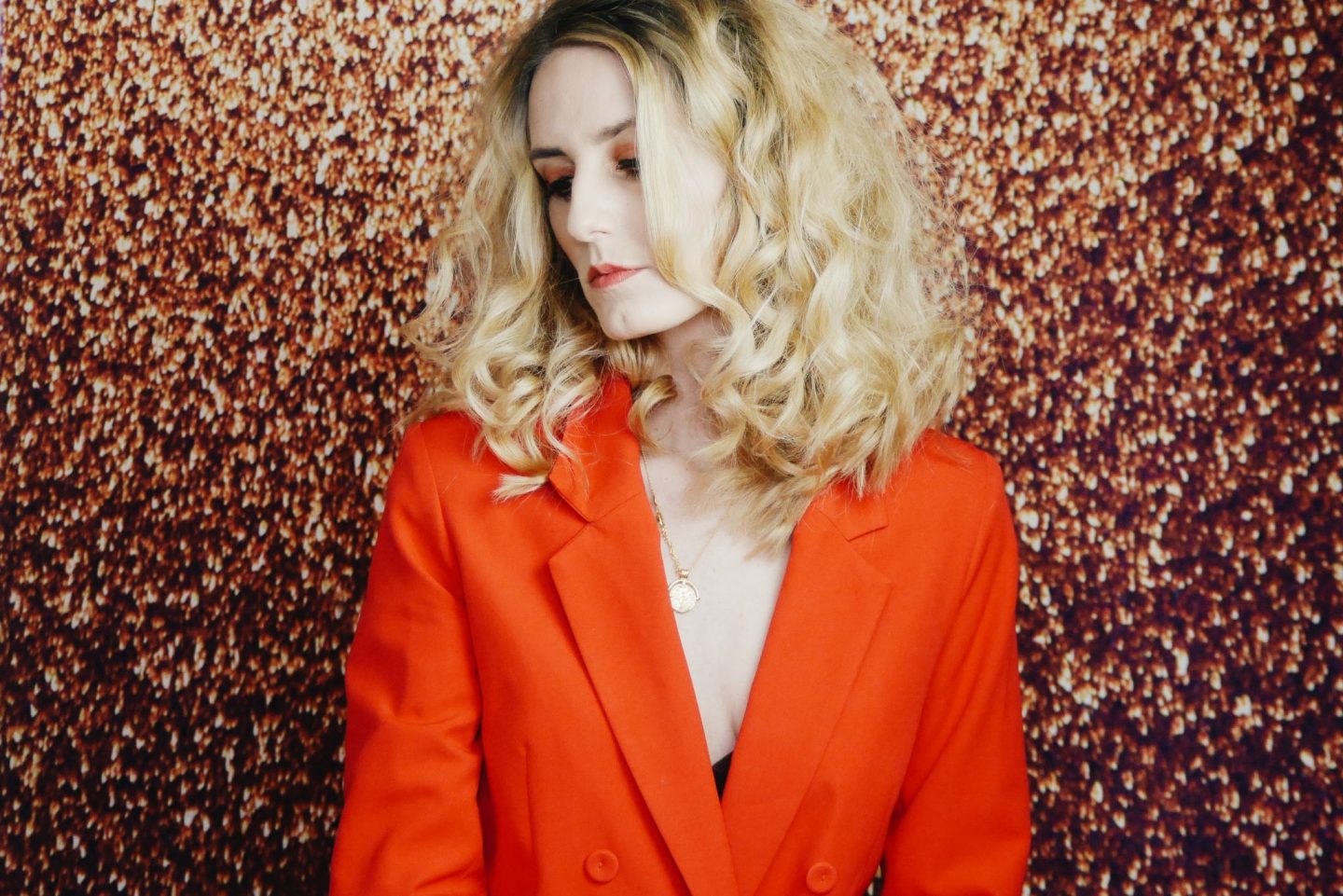 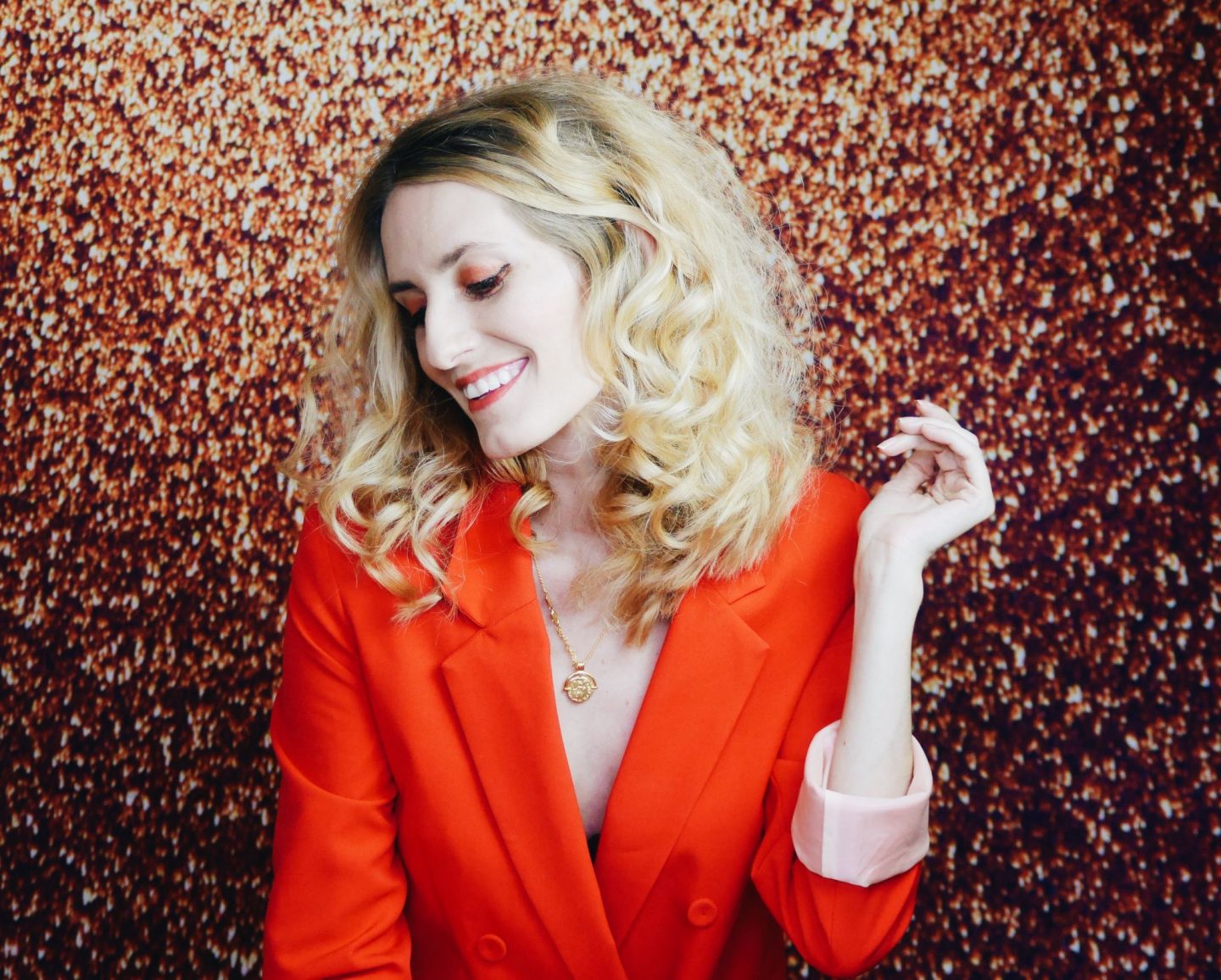 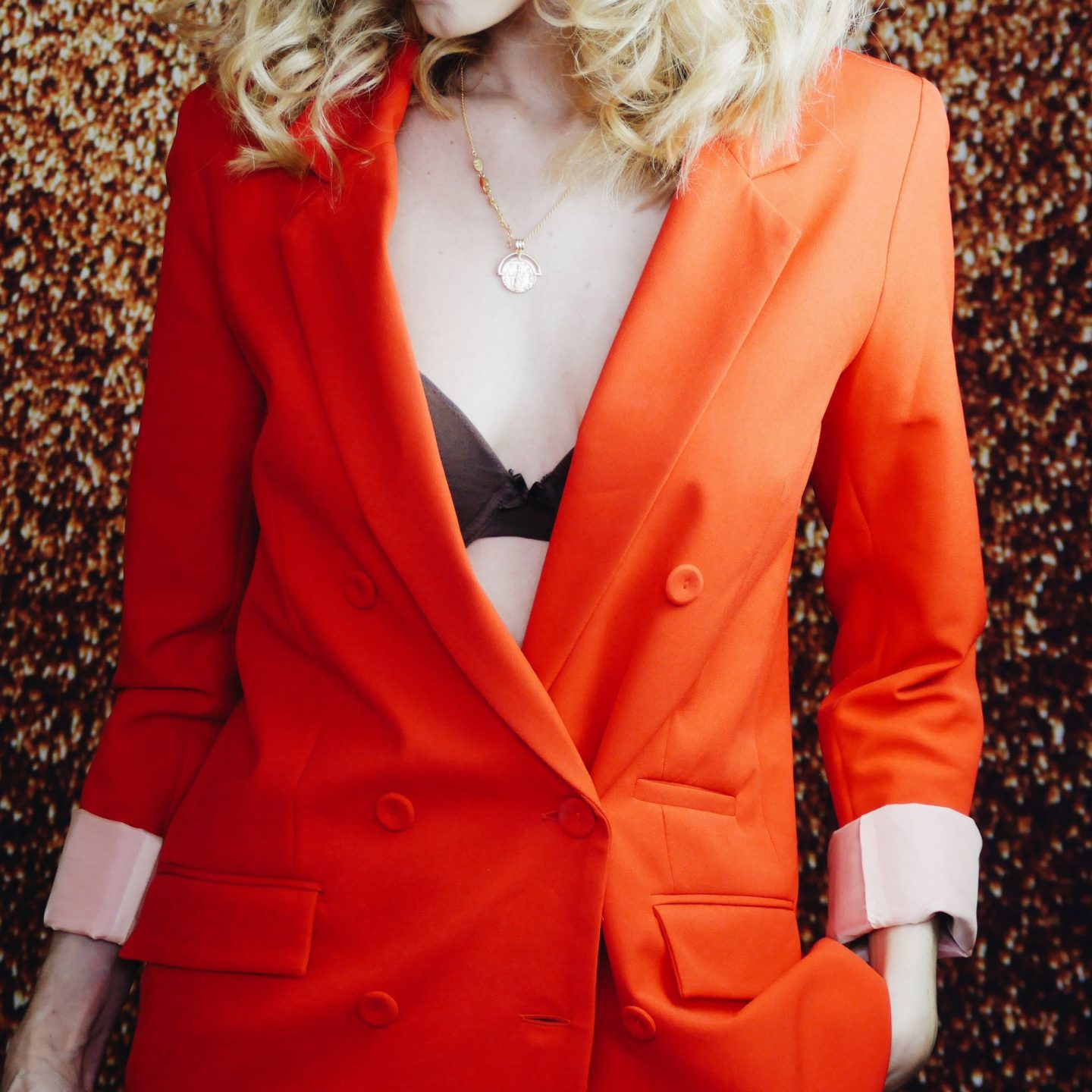 I also fell for the relaxed fit of the suit, in particular the blazer. The slightly oversized and mannish fit gives it a more effortless feel, and it turn makes you hold yourself differently. I found myself puttng my hands in the pocket and standing in chilled fashion, rather than feeling all uptight and stiff like I would in a body-con outfit. The double breasted design means that you do have quite a low neckline with this look,  so unless you have a cleavage to fill that space you may want to think about what you’ll put underneath to protect your modesty. If I wear this for a day-time look, I’ll team with a simple white tee or crisp white shirt (and keep it casual with converse), but for evening I might look into teaming with a silk slip, or a bra-let to put underneath. This is where you can inject your own personality and preferences. 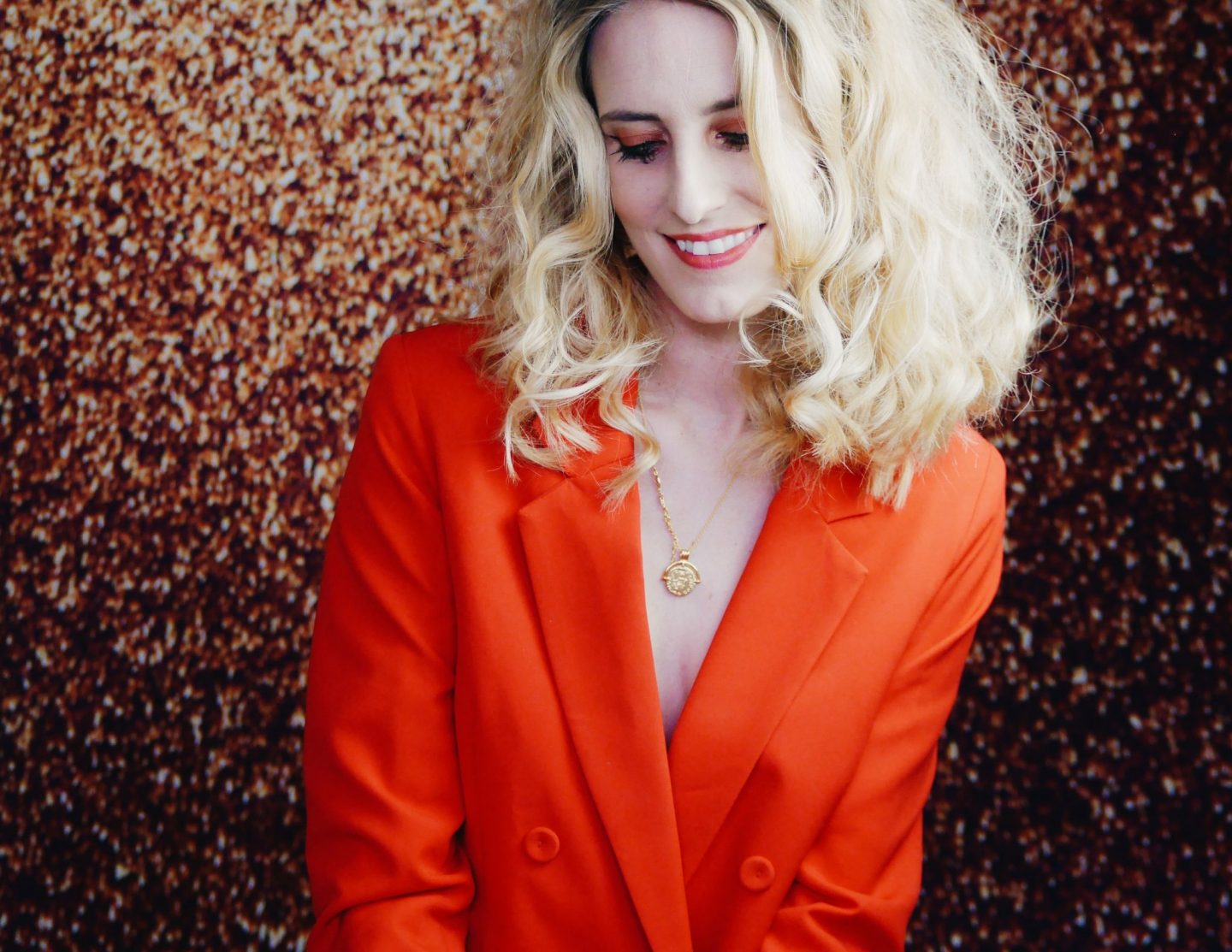 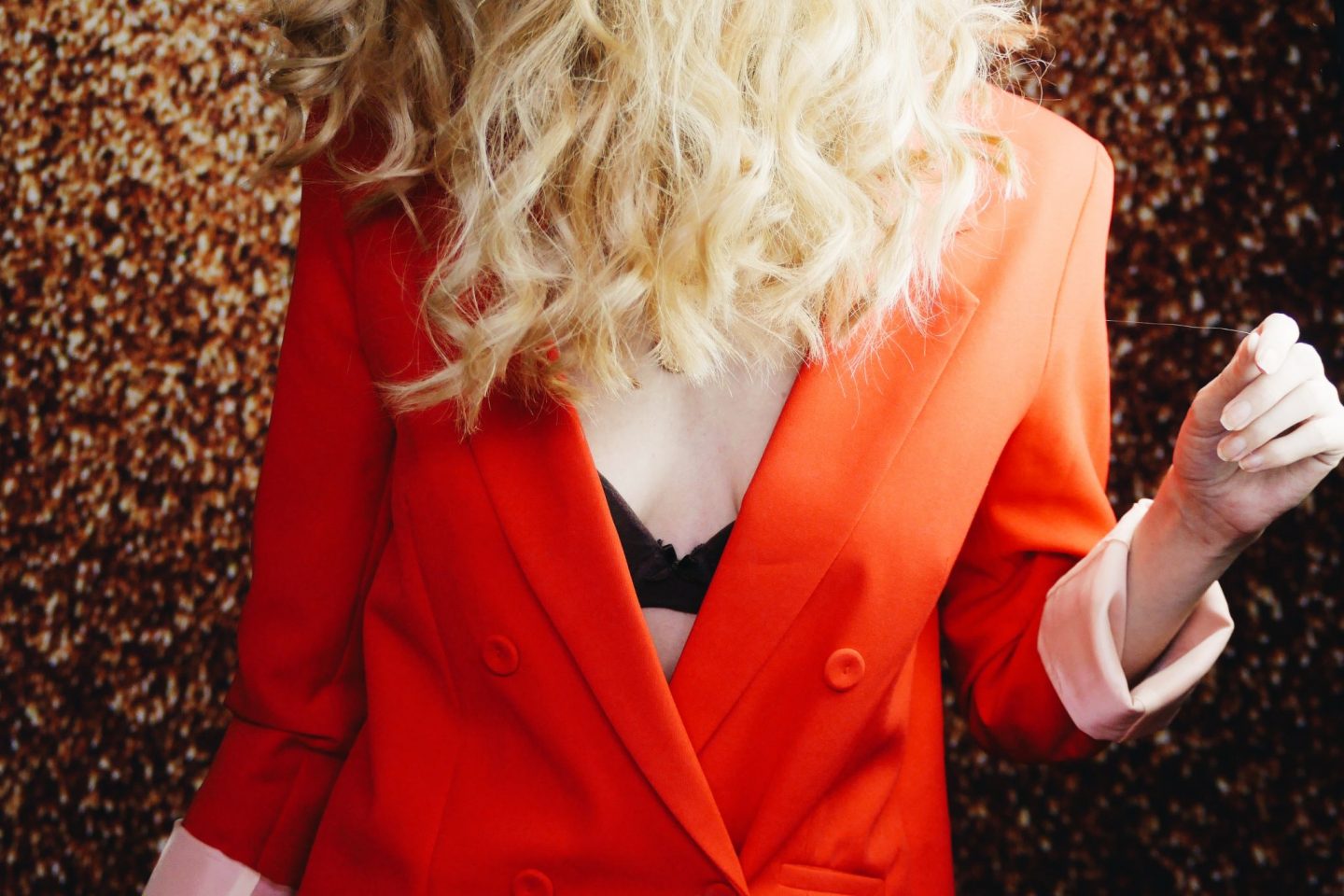 I just decided to go with a rather grotty threadbear bra because all suitable pairings were in the wash,  and I wanted all the focus to be on the suit for this party themed blog post. I always think of 90’s girlbands when I see bra’s peeking out from blazer lapels, I’m sure the Spice Girls and All Saints often sported this look. 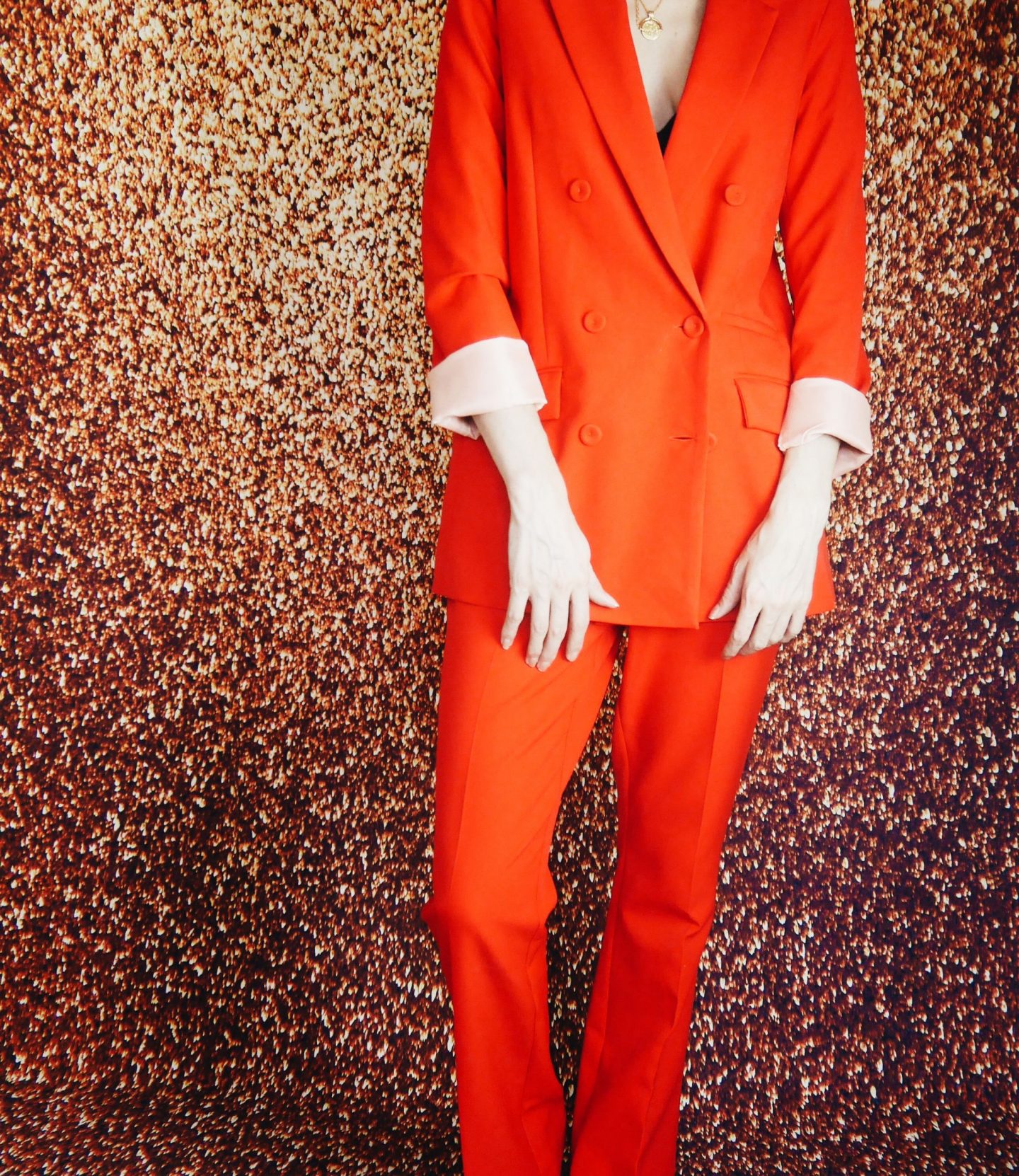 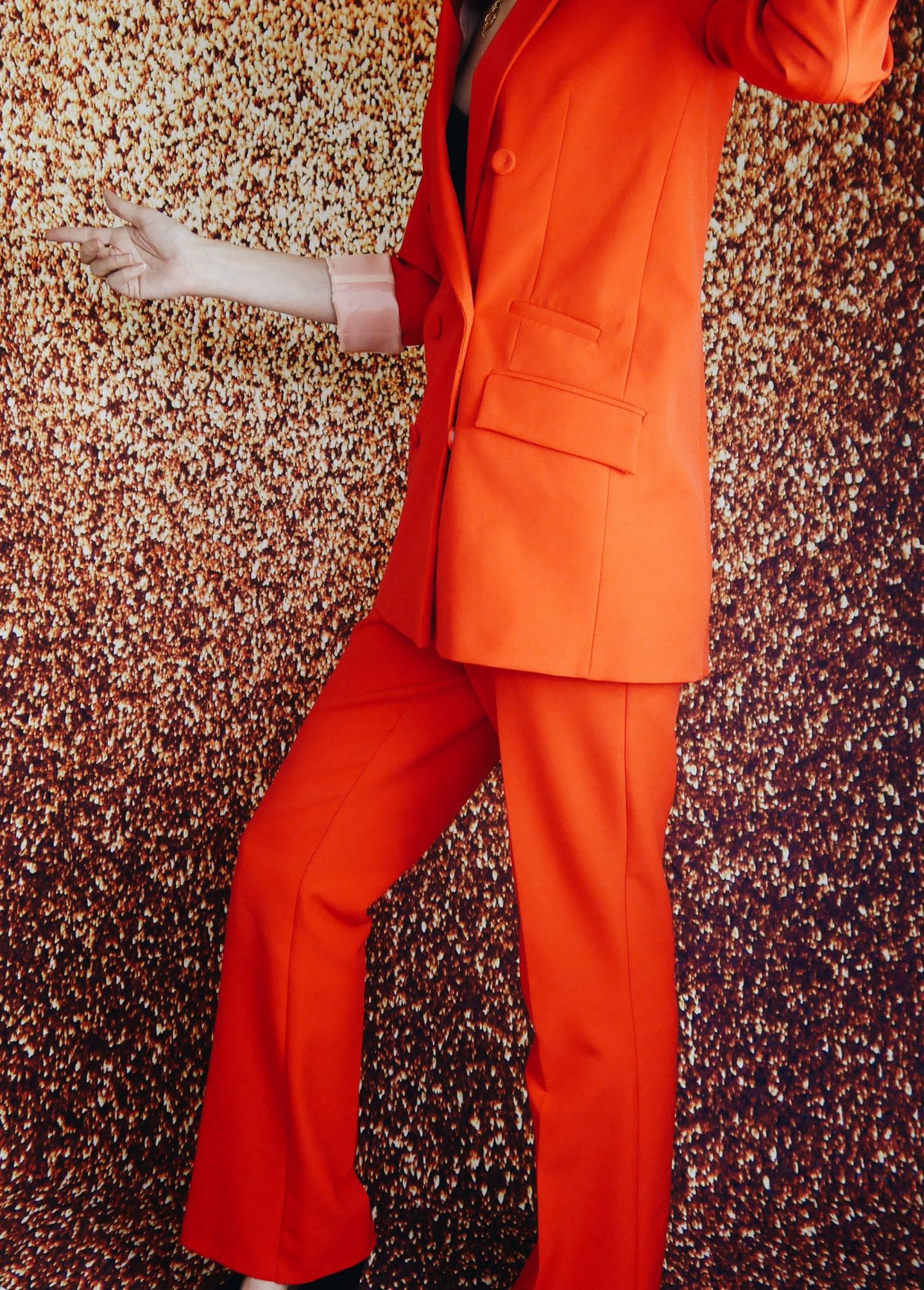 You will see the lovely decorative Christmas present from Simon featured alongside the suit though. I had shown him the jewellery brand Missoma on Instagram. I’m pretty sure he doesn’t digest 90% of the things I say to him, so I was pretty astounded to unwrap this beauty on Christmas Day – I had no idea it was coming….and yes I did cry. I love that it’s a bright yellow gold,  as it seems to add a vibrancy to every outfit I team it with, and I especially love that it’s from him.  It’s going to be one of those pieces I wear forever. Unless of course Si does something to make me hate him, but even then I can imagine I wouldn’t want to part ways with it. 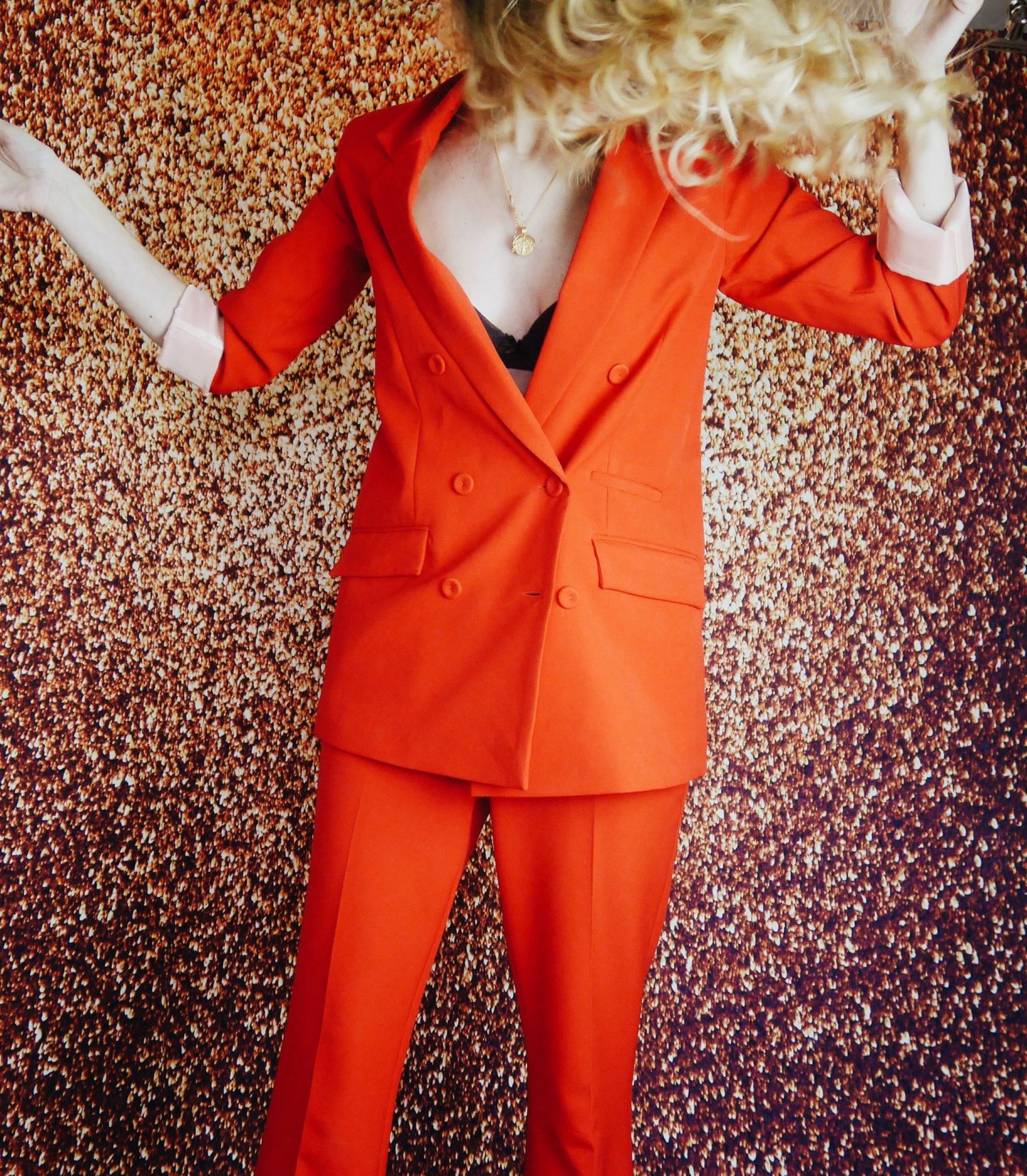 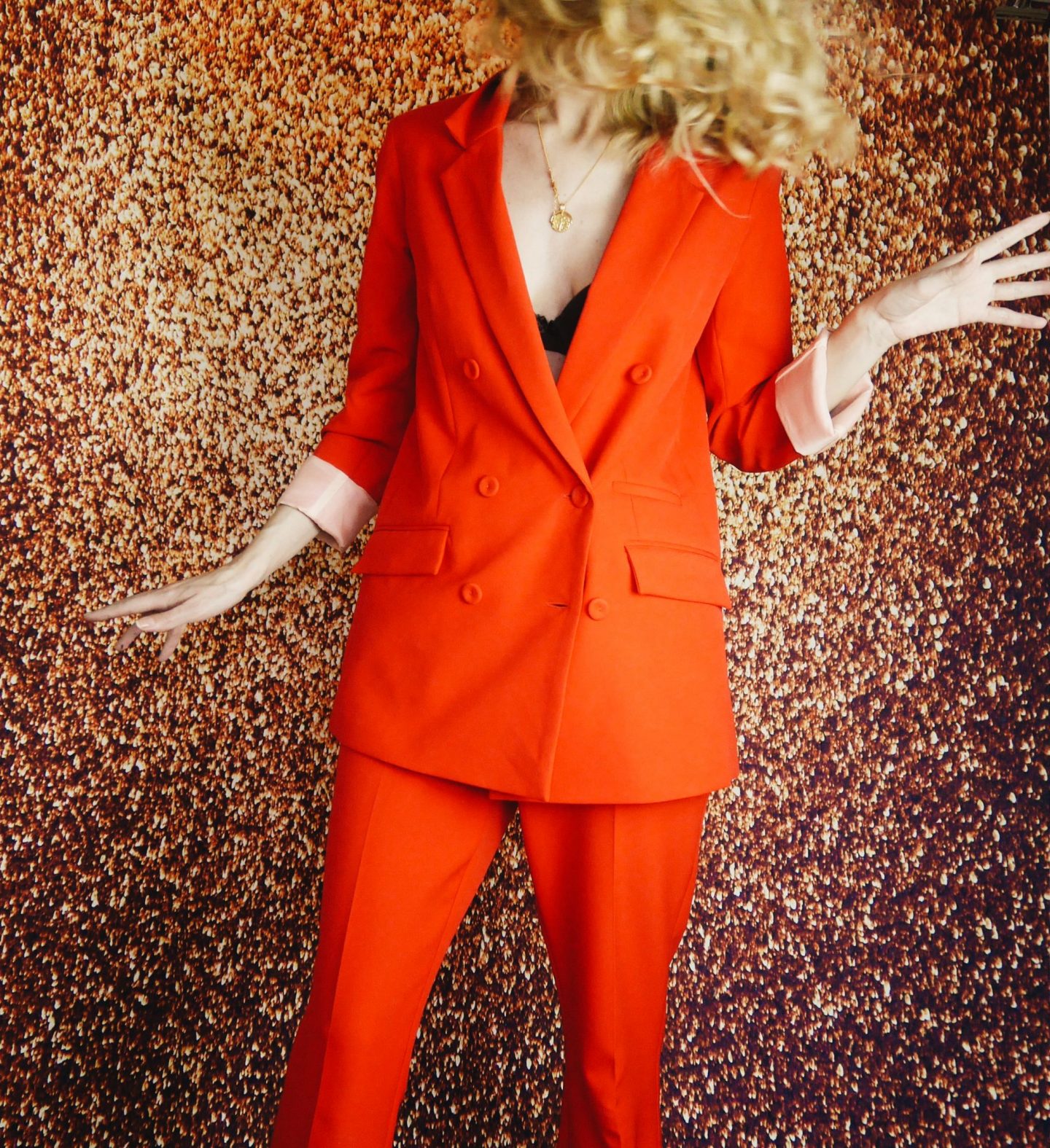 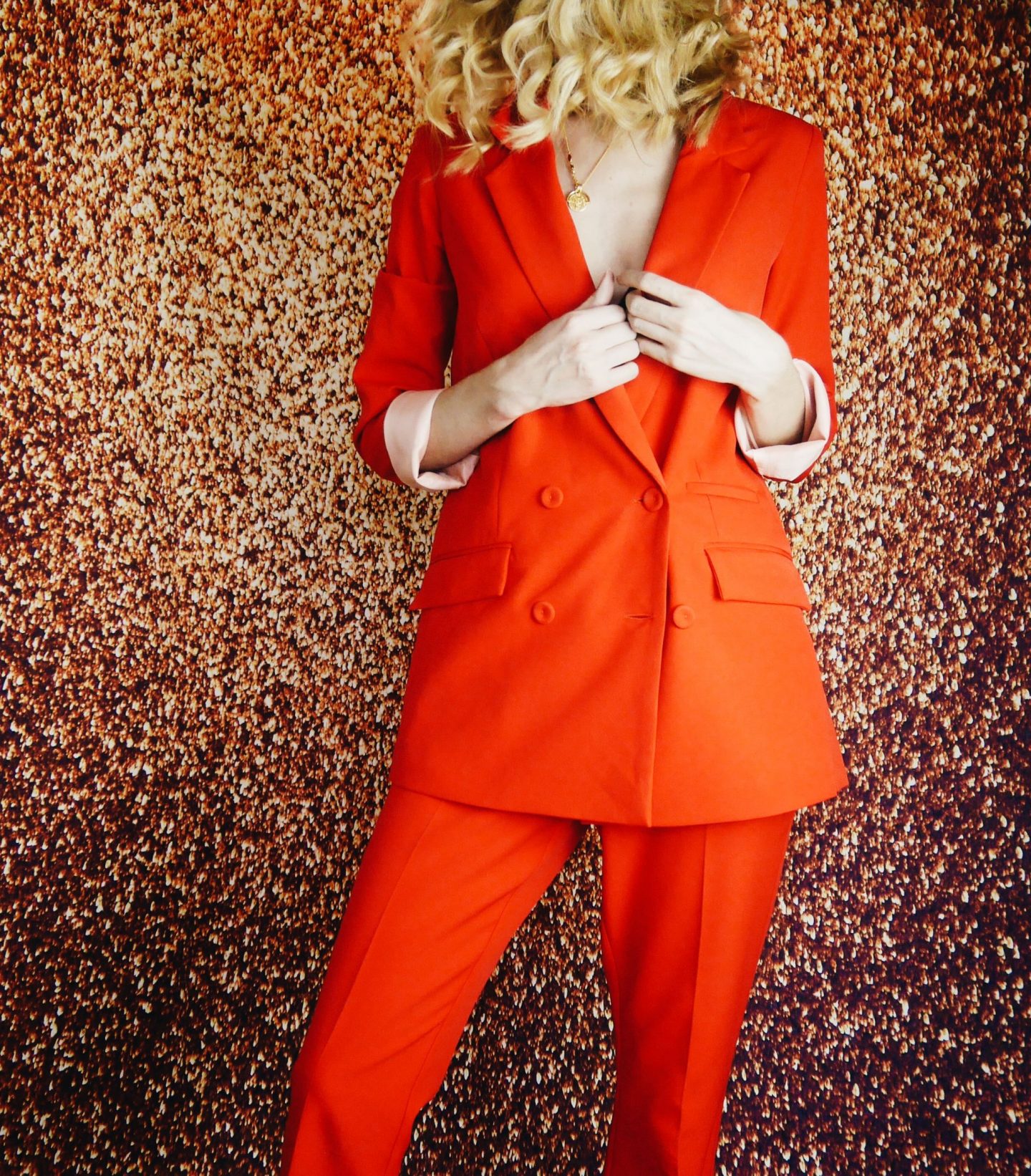 So if you usually go for a skirt of dress, why not consider a suit for new years (or whatever you’re next fancy nights in/out is).  They’re great if you’re someone who doesn’t like to flash a lot of flesh, or if you know you tend to get a bit chilly and goosey on a night out. They’re perfect if you want to get value for money too. Not only can you go casual with them by teaming with trainers, you can use them as separates. I can’t wait to pair the blazer with my ASOS farleigh jeans, and I can’t wait to wear the trousers with a graphic tee and a faux leather moto. They also cover that grey area of dressing when you it’s unclear just how dressy you should be, as a suit can be perceived as both smart or cool. You could also carry some sparkly accessories with you if you feel like you need to jazz it up a bit once you’ve seen what everyone else is wearing at the soiree. 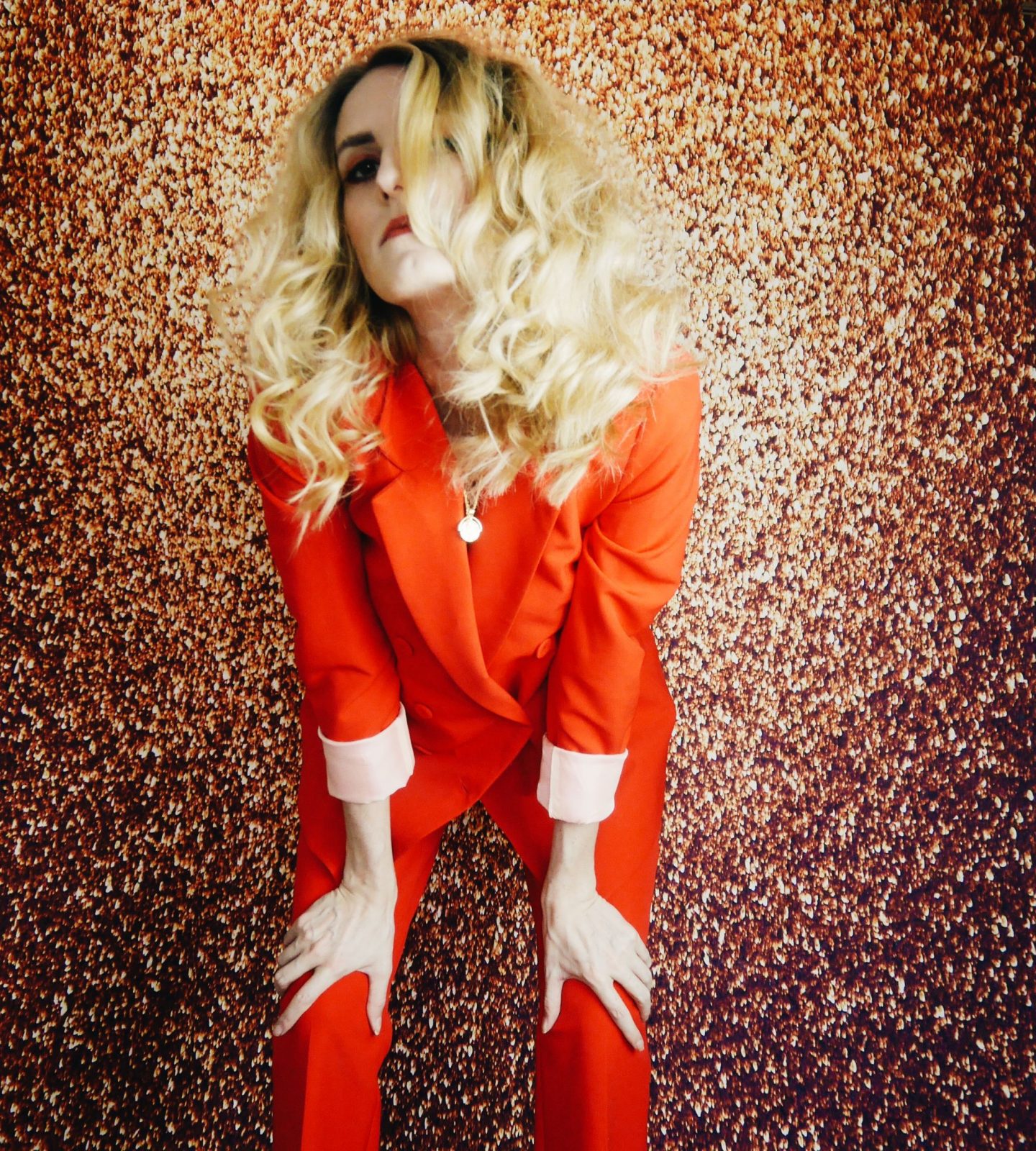 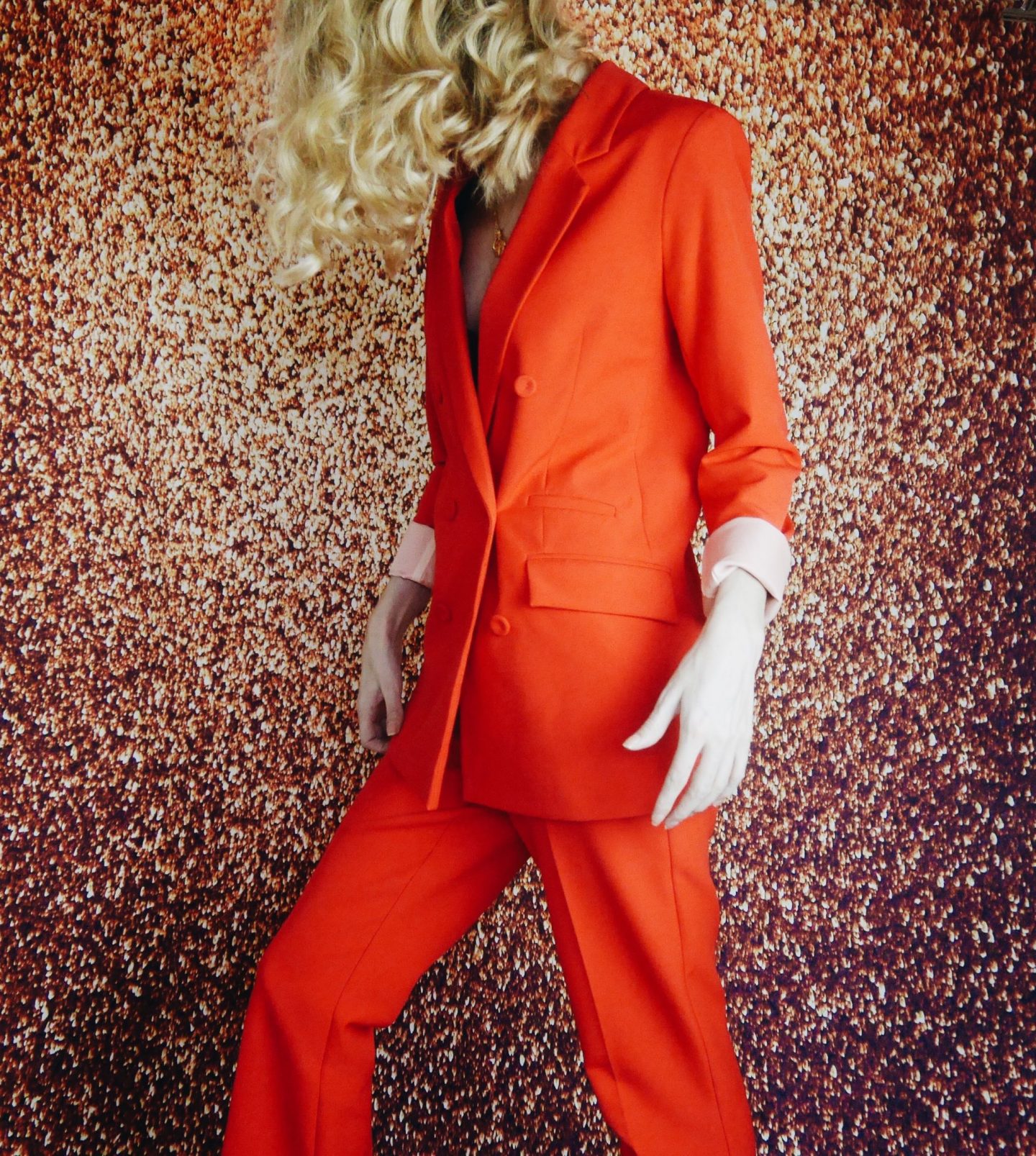 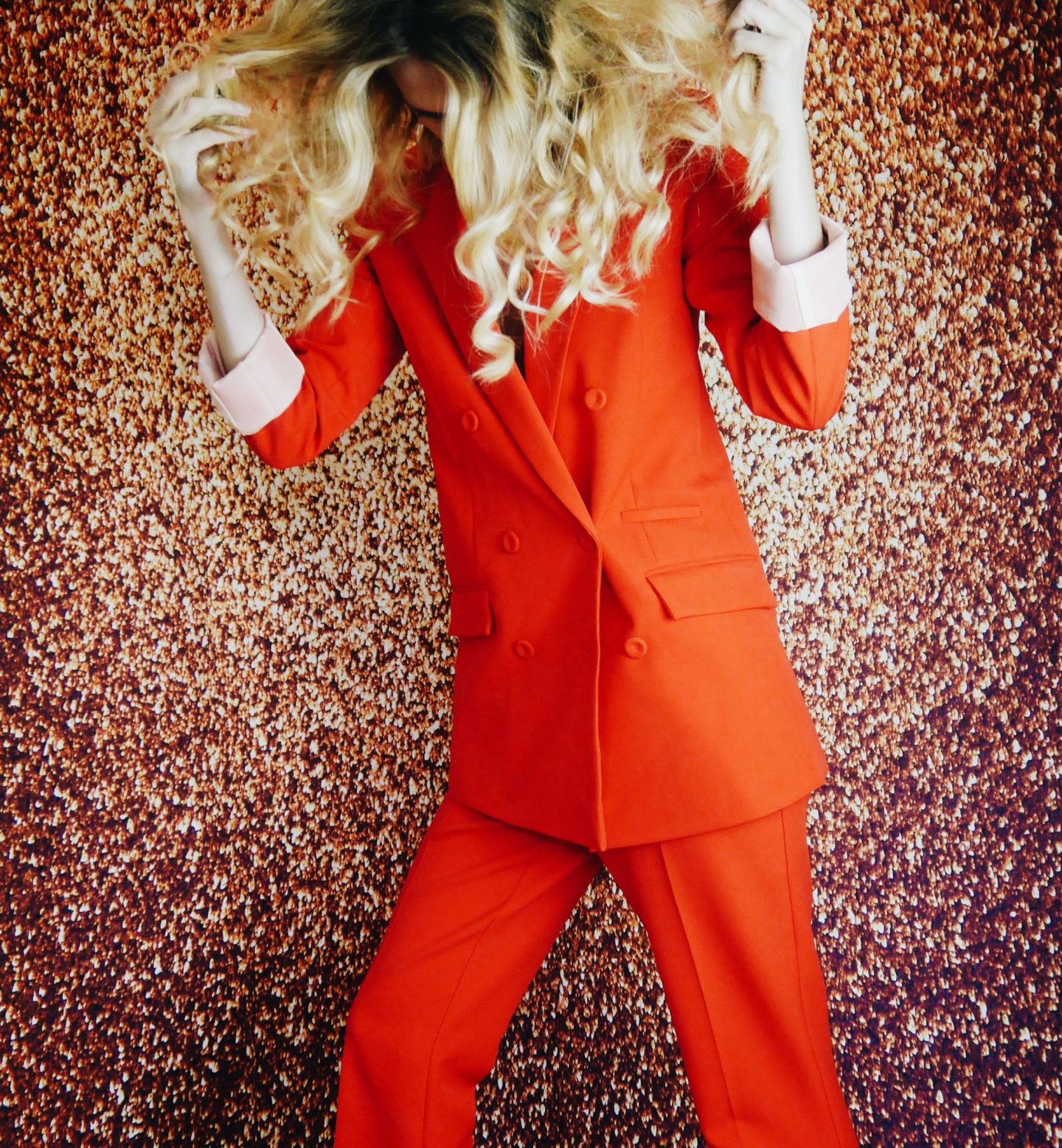 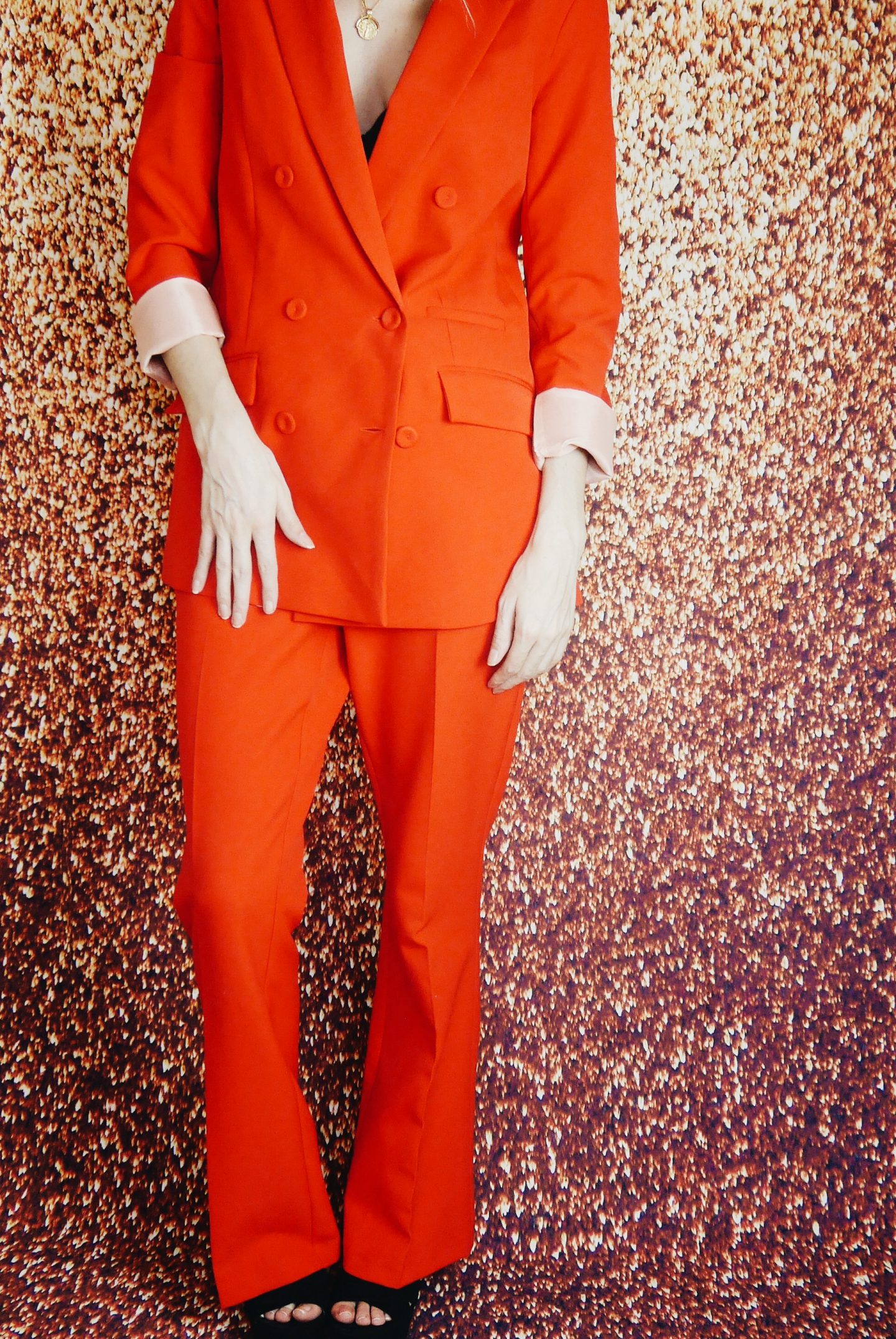 So that was one of my New Years options. What do you think of the look? Is it something you’d consider wearing yourself?

By the way, I went to the OASIS press day a few weeks ago and they had so many amazing pieces (including suiting) ready and waiting for S/S, so I can’t wait till those seasons start to dribble into the store. Trust me, keep an eye on their store, even if you haven’t been an OASIS girl before.