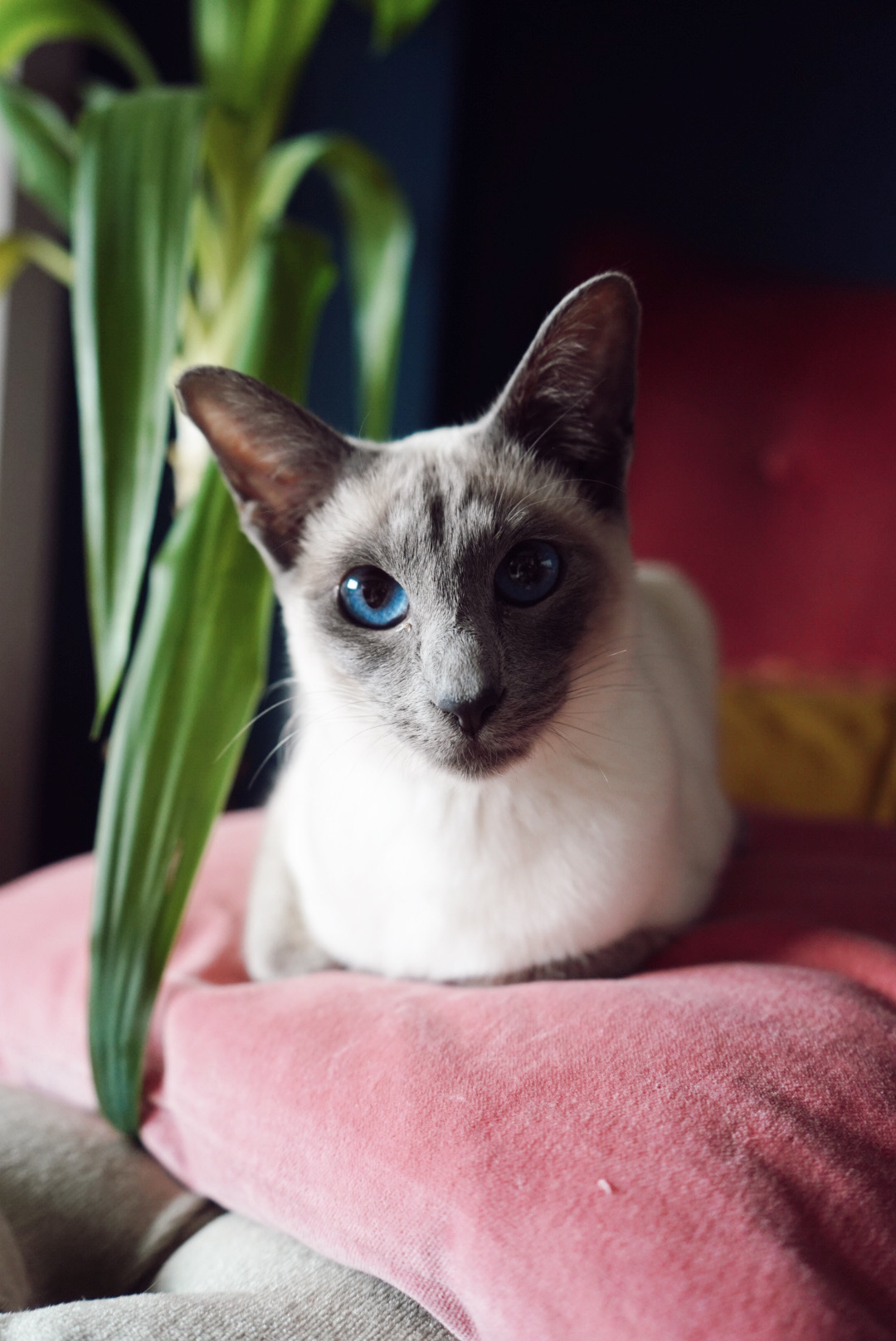 Some of you will know that we fostered a male lilac point Siamese called Nimbus for three months last year, and how bereft we felt when the foster period came to an end. We were utterly distraight, and the flat felt way too quiet post Siamese. It was out first experience of a Siamese cat (aside from Lady and the Tramp), and we fell hard and fast for the breed. Fast forward two and half months and we now have our very own, for keeps this tie. We adopted Bluebell from her original home in Leeds on leap day, and she is already the love of our lives – including eachother. She has so many traits we came to know and love via Nimbus that I feel equipped to write a post that explains the wondrous reality of becoming a slave to these wonderful creatures.

You’ll have to get used to sudden loud noises. Followed by anxiety….what are you about to find. What’s been broken? Is it the cat..or is it your favourite vase. It’s always the second.

Are you sure you’re a cat?

You’ll be surprised how dog like Siamese can be. I’d go as far to say they are more like dogs than cats. If you like dogs and all they bring to your every day life this will be a huge bonus, but if you are unfamiliar with the breed it can come as a bit of a shock. They need a LOT of company, stimulation and contact, and some even love to play fetch…. yes, really. If you’re someone that wanted a dog, but you aren’t able to take the dog for walks then a Siamese is the perfect solution. 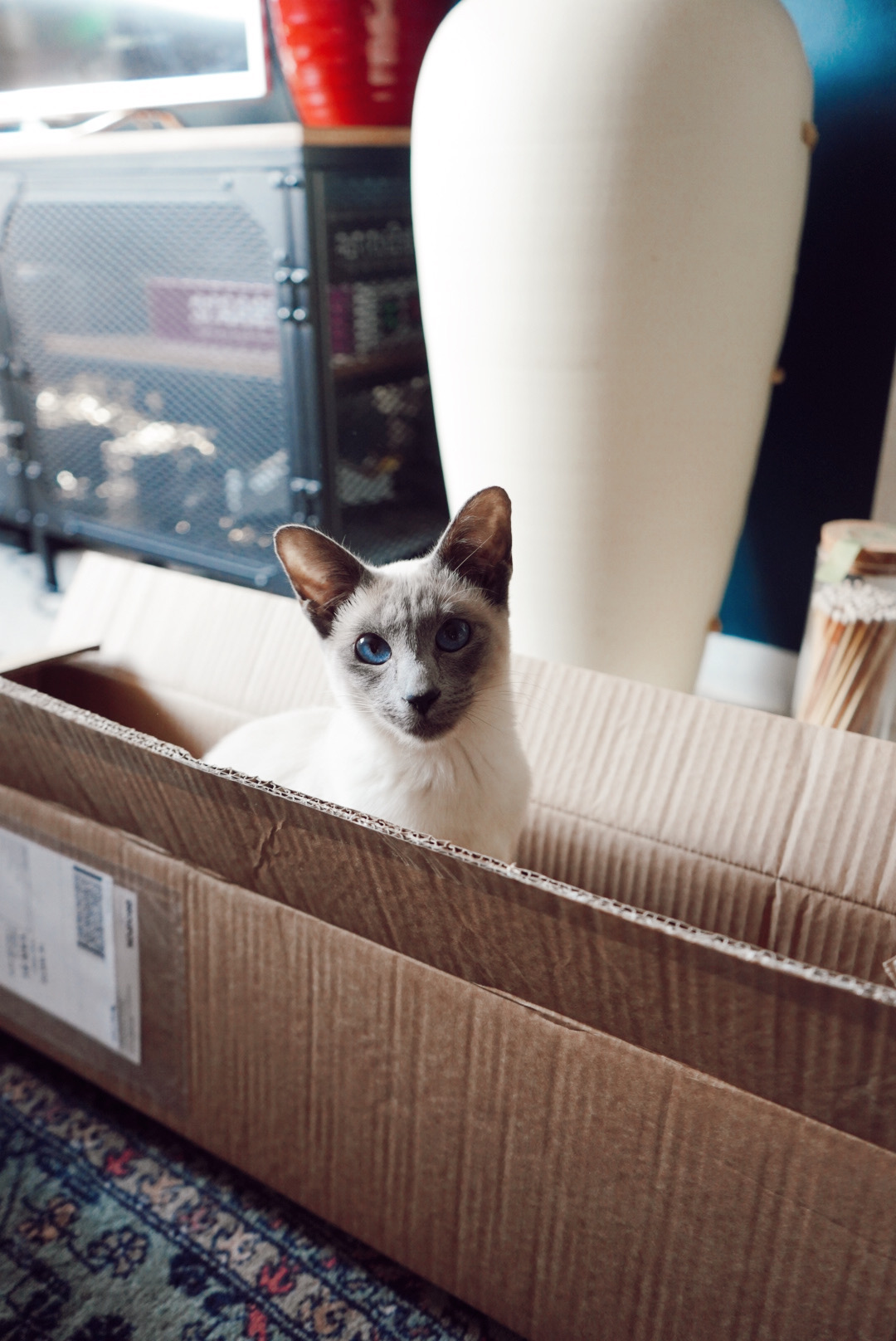 If you like a quiet and calm home, this probably isn’t the breed for you because more often than not there will be some opinionated meowing coming from your Oriental friend. These proper chatty Cathy’s will always have something to say about everything they’re doing, you’re doing, what you’re not doing, and always a very strong opinion about what you’re eating etc. I probably talk to Bluebell more than any other living thing, and she loves to talk back with her very penetrating timbre. In fact she’s usually the one initiating conversation ( at all hours of the day ). For someone that works from home alone it makes the flat feel far less lonely – although it does make filming videos without noise pollution absolutely impossible. It’s not a sound possible to sleep through, but on the upside I feel like it’s giving me very good preparation for motherhood. 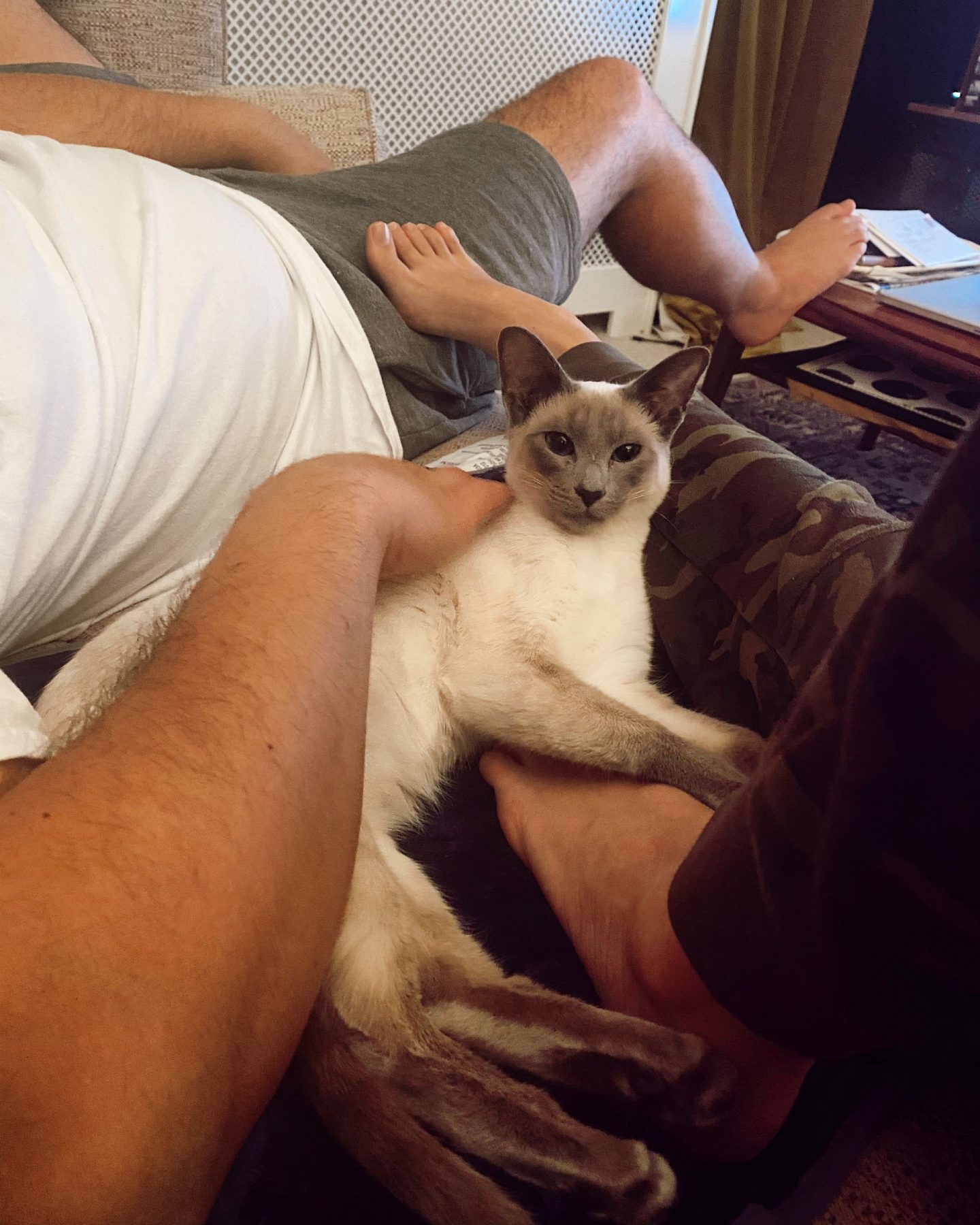 Don’t expect to have any alone time EVER again. Your siamese will want to join you in the bathroom (whatever activity you may be doing), they’ll want to join you on the sofa, in the bed, on the kitchen sides. They’ll want to have at least one part of themselves touching at all times, if not all of them.  Bluebell rather adorably always needs to have a paw on you, and it melts your heart every time.

They know what they like (and what they don’t). It was clear very early on that she would not eat any food of the beef or lamb variety, but if it’s chicken or fish….goodness me does she go mad for it. Apparently most Siamese adore chicken so that’s a safe bet if you’re new to life with a Siamese. Talking of being particular they like things to be clean, so keep on top of the litter tray. They like a hygienic bathroom, probably more so than any person you shared halls with at uni. 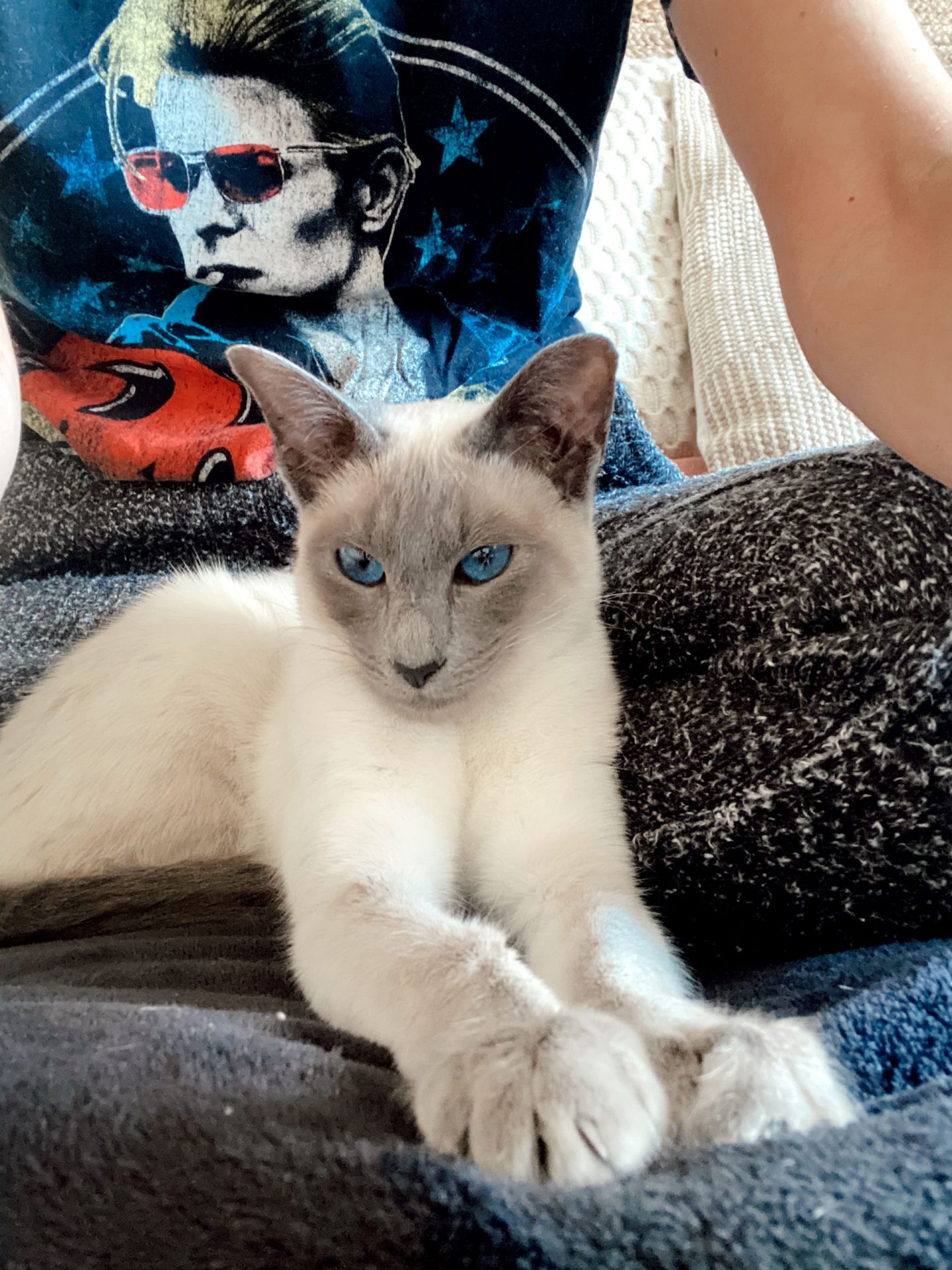 Our foster Nimbus used his litter tray without incident from day 1 (apart from the time we shut out bedroom door at night and he left us a protest poo). Our new adoptee Bluebell has used her litter tray without accident from day one too, even though her entire life has been uprooted without warning. We even got a brand new one (one that is enclosed with a door) with a brand new type of littler and she’s shown no hesitation in using it. I think I’d cause more fuss about having a new destination to poo to be honest. What a good girl! In our experience they appear very adaptable to new situations (as long as they’re looked after well and given the attention they desire). I hear in general they’re not easy to train though….but of course each creature is unique  – I’ve seen some pretty fancy tricks courtesy of Siamese cats on Instagram. 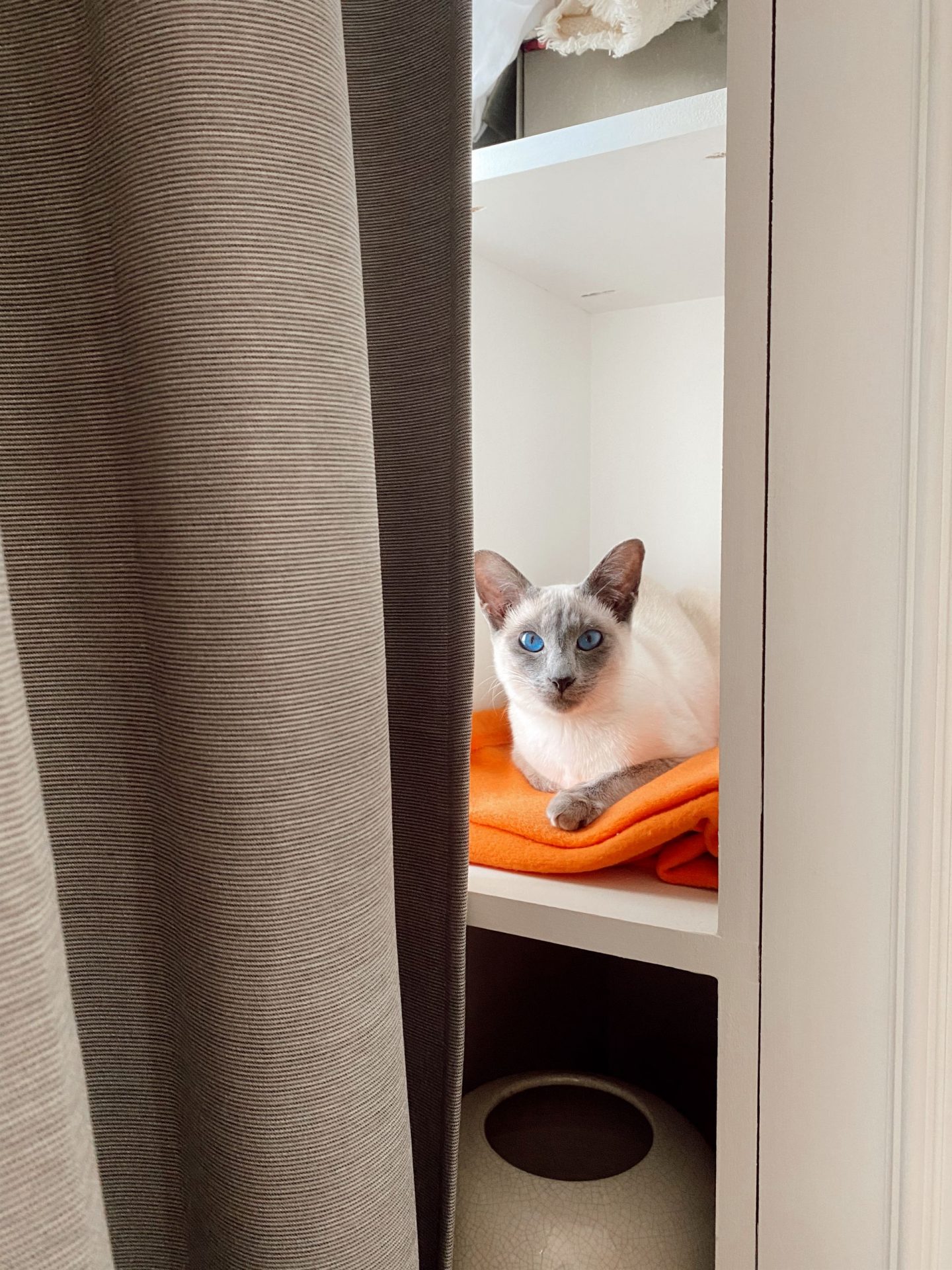 Siamese have sensitive eyes so they absolutely love the dark. You’ll often finding them under a sofa, trying to get in a cupboard or drawer, or finding a secluded nook to settle down in. Our foster Nimbus would sleep under the covers with me at night, mostly between my legs. As I type this Bluebell is inside the TV cabinet screaming to be let out. She’s worked out how to get in but not how to get out. 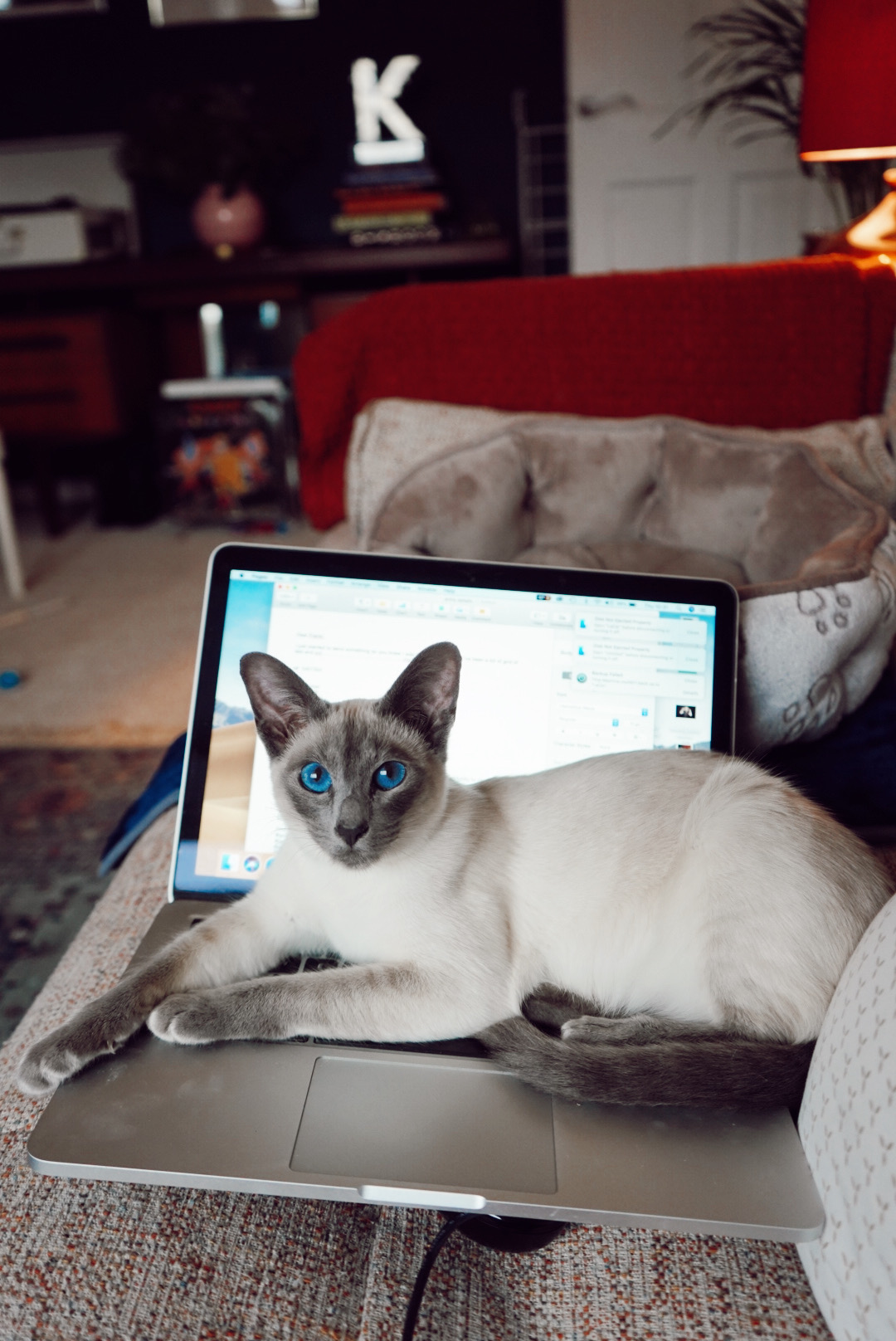 My Bluebell absolutely loves to be warm. The heated blanket I got for my sore legs has been fully stolen by her and is her go- to place for a snooze. She keeps an eye on whether I’ve put the switch on too. In her rare quiet moments you’ll also often find her basking in any sunny spots she’s found, whether it be the window sil or the stairwell where a shaft comes down via the window in the door. She’ll also nestle down in your lap, whether it’s convenient to you or not. I can perch on the side of the bed for a few seconds just to plug my phone in and she’ll rush over and start circling on my lap to find optimum snuggle position. I’ll end up perching uncomfortably for half hour because I don’t want to disturb her cosyness.

Oh don’t worry you’ll have visitors… but they won’t be there to see you. These characters pull on the heart strings. So cheeky, so affectionate, so full of character that everyone falls in love with them, even people that would categories themselves as exclusively dog people. When the cat’s around, inevitable stealing the show, no one will be listening to a word you’re saying. Get used to it. 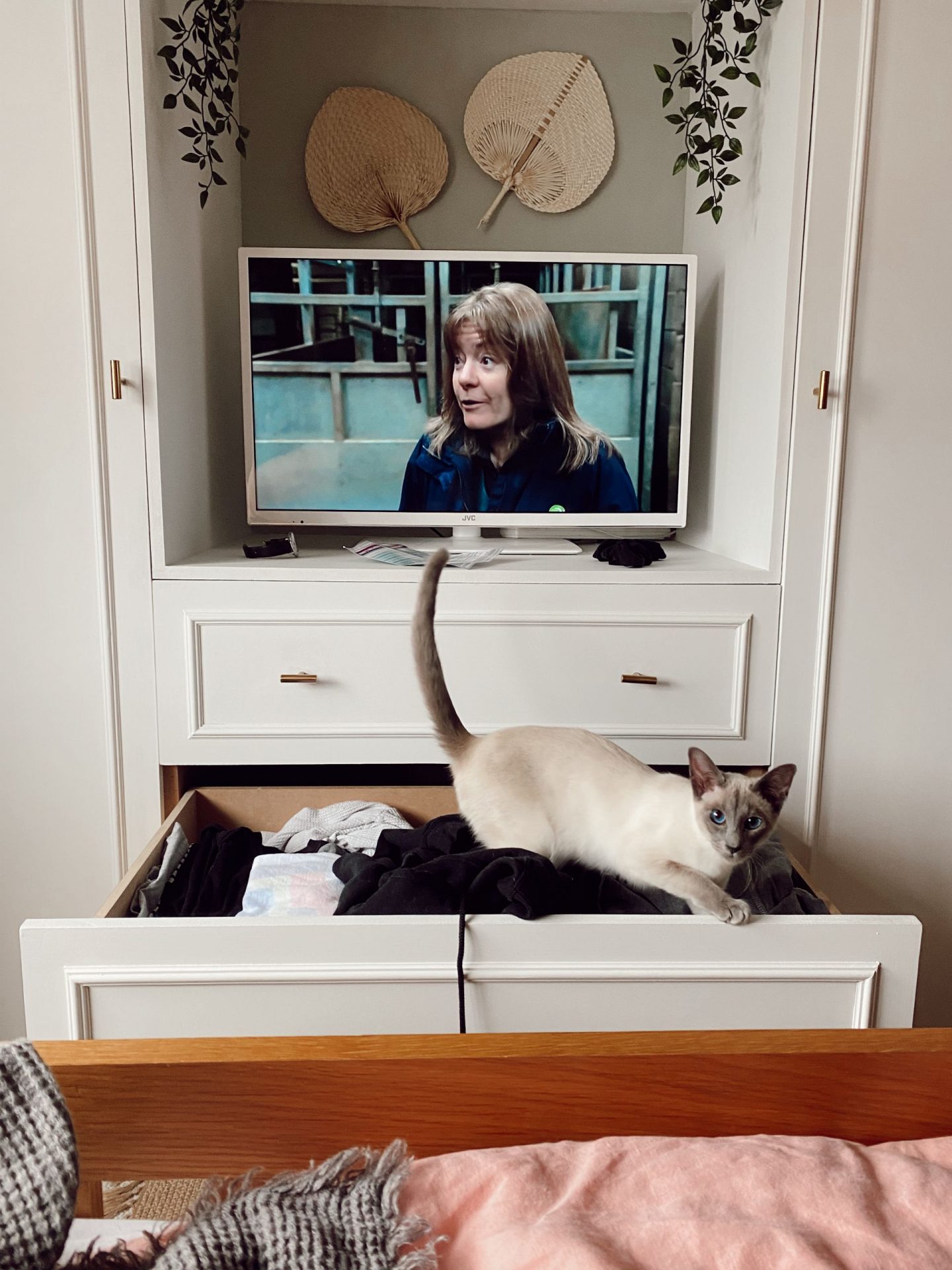 You are my Everest

If you don’t get them a climbing tree or shelf they will find a way to climb, even if its the shelf with all your treasured and most expensive trinkets, the kitchen side or the top of your doors. Even if you get one of those luxe high cat tree they’ll still probably ransack your house and climb on everything you don’t want them to. Don’t get a Siamese if you’re going to be too precious about your interiors and homeware because you’ll drive yourself mad – either by having to constantly get them down from a great height or by witnessing your favourite purchases getting clawed or climbed on.

Apparently they can be prone to obsessive behaviour. I relate to be honest, particularly right now. But I haven’t witnessed anything worrying thus far, but a happy part of this is how often and well Bluebell cleans herself. She takes real good care of herself – I’m hoping she‘ll serve as inspiration for me to be honest. Obviously being an indoor cat she’s less prone to muck and dirt, but she never looks anything less than flawless because of her thorough regime.

Their soft short hair means they are extremely low maintenance and easy to look after. While the white fur does show on your darkest ensembles, it really isn’t as bad as you think it would be. Nothing some pound shop Lint rolls can’t handle. They are prone to dental issue,s so one thing you can do to keep them in good health is clean their teeth regularly. Apart from that..just enjoy snuggling their beautiful soft, perfectly groomed selves. 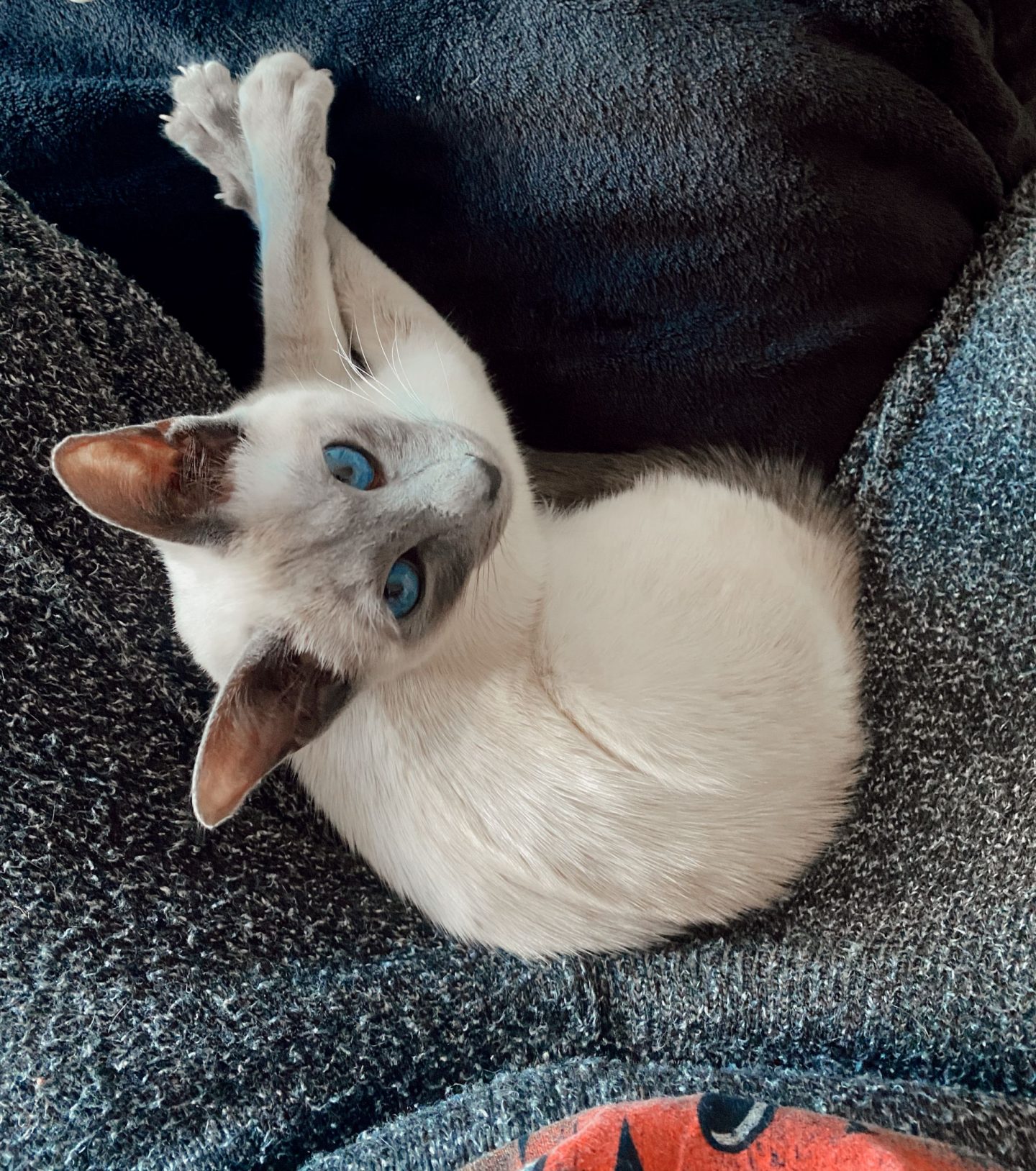 Most cats have their hyperactive moments where they shoot around the house at great speed with a glint in their eye so unnerving you wouldn’t be surprised to see their mug shot on TV. Siamese definitely choose inopportune times to do this…in my experience, generally when I’m trying to nap. They’ll often end a lap of zombies by jumping on you while you sleep which isn’t great if you have a weak bladder like me. 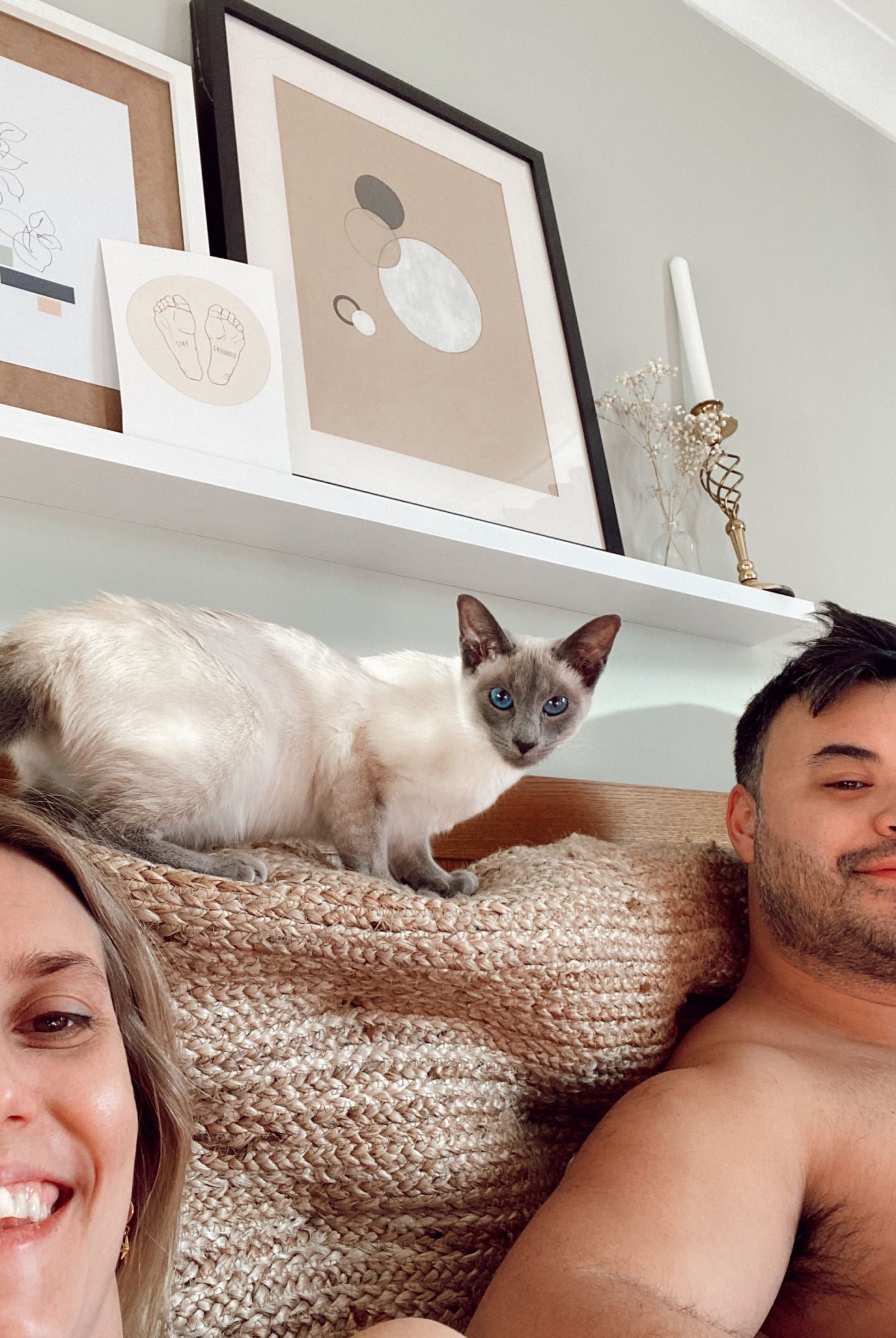 Say goodbye to your hopes of being a good plant mum. In two weeks she beheaded my birthday Pineapple plant, de-fluffed my favourite bunch of pampas and nibbled at my overpriced asparagus fern. My fault for being a hipster I guess. I’ve started the lengthy process of purchasing faux/artifical alternatives, and the rest that are still in good shape (currently) will reside in higher climates of the rooms (our of reach from her nibbling mouth). And yes…I’ve tried those repellant sprays. They work for a time…then she gives up on being put off by it! 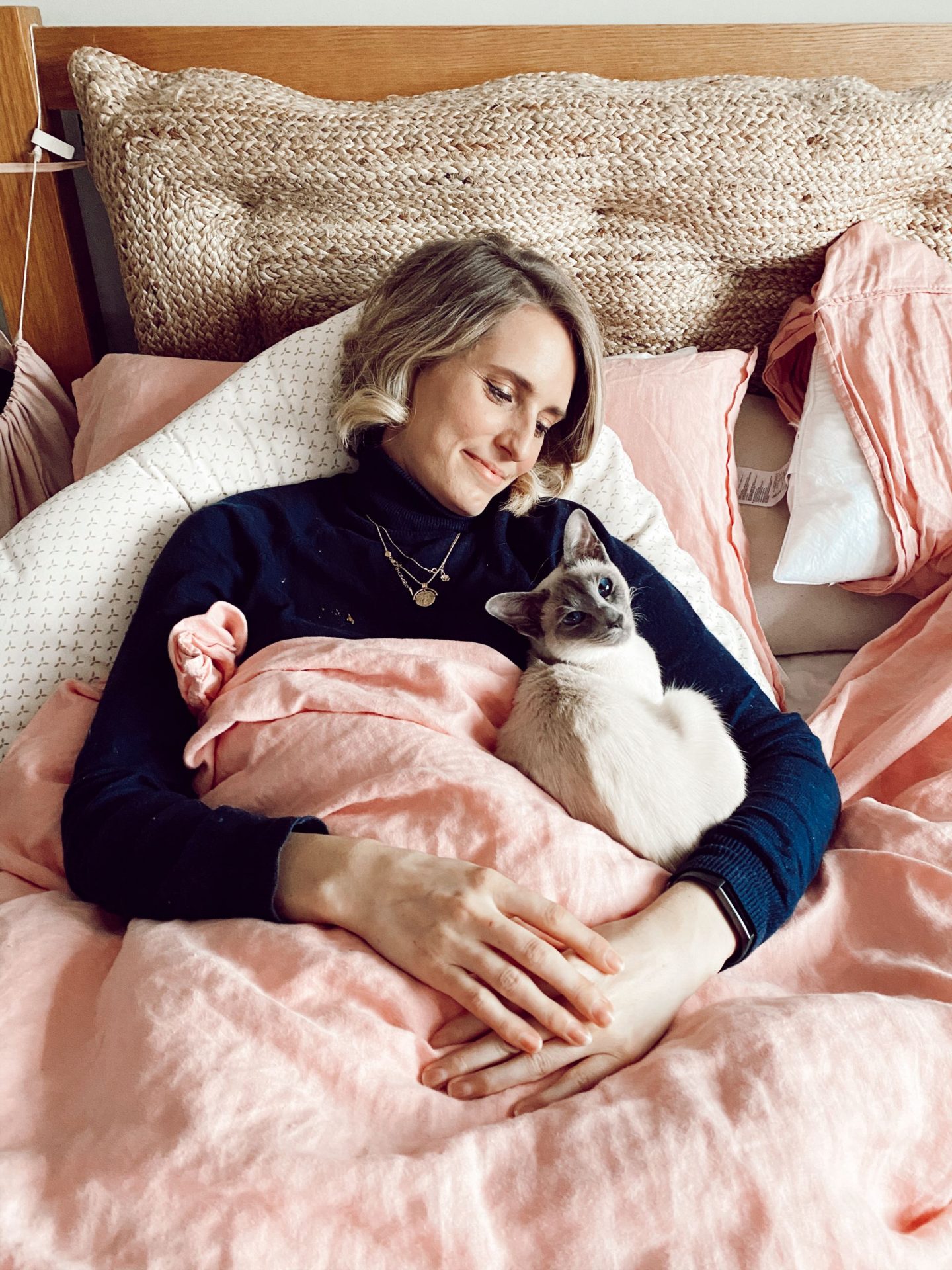 You’ll often read that they are intuitive but till you have one you might think that it’s ridiculous hoohah, and that owners just desperately want to believe they have this kind of intense and deep connection with their animals. But the other day when I was having a teary moment, she came up to me and looked me dead in the eye with a look that could only be described as concern. She stayed till my face stopped leaking as is she was comforting me in my time of need. 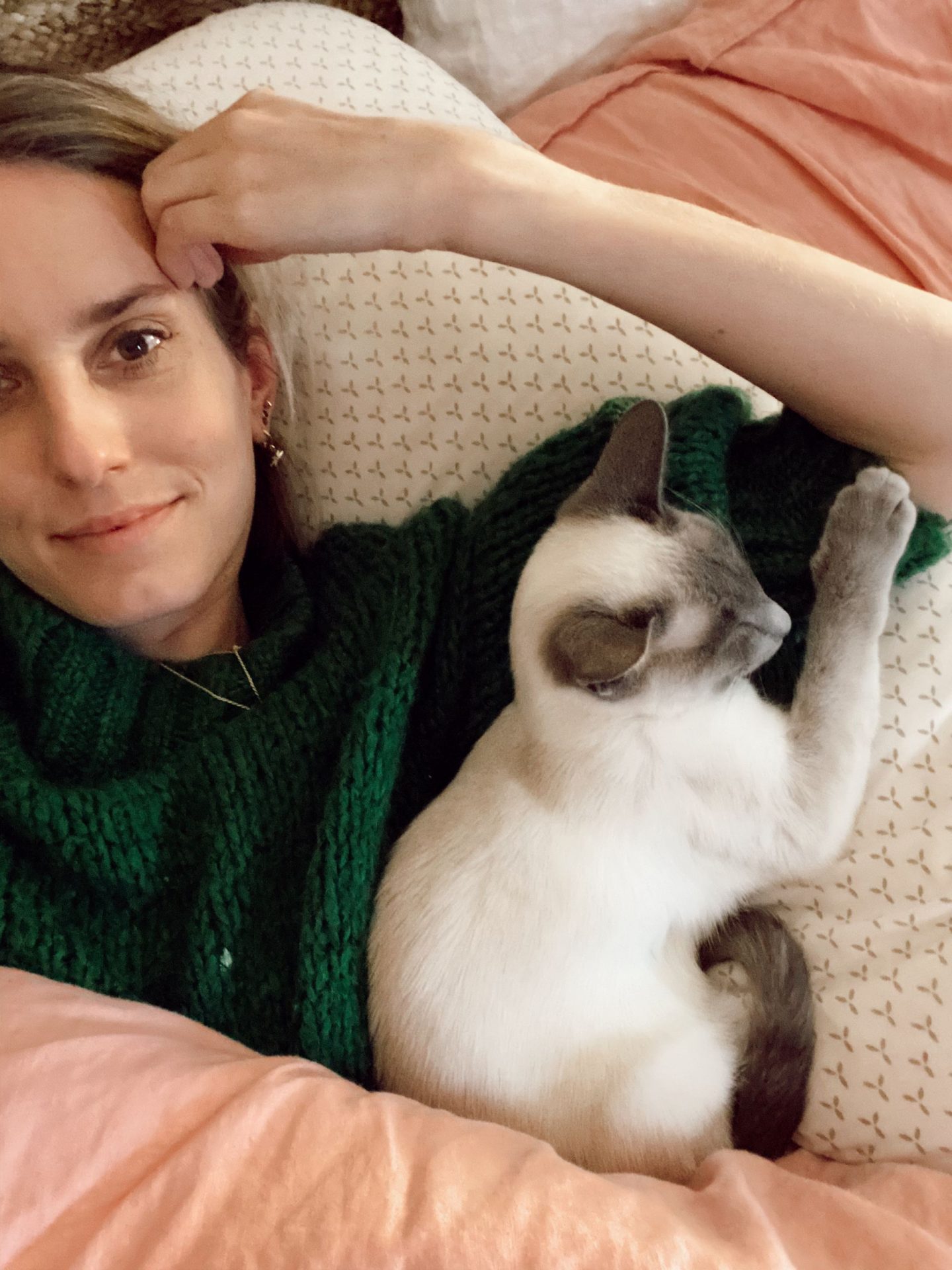 So after all this, what do you think? Are you ready to become a slave for one of these beautiful felines?